Time to slice up some teddy bears.

Truth be told, I have been following the sole developer of Phantom Rose for quite some time. One day someone I was following on Tumblr reblogged Makaroll’s art and I followed them soon after. Though, it wasn’t until I finally made a Twitter account that I came across some surprising news. This artist that I happened to come across one day was developing a game. Looking back, I have no idea how I missed this (maybe it was one of those weeks where I was too busy to visit Tumblr), but I was excited to find out more. It didn’t take long before the teaser trailer was released to reveal that it was going to be a card game and the level of hype I had skyrocketed. Despite being really terrible at card games, I was definitely going to pick up Phantom Rose. 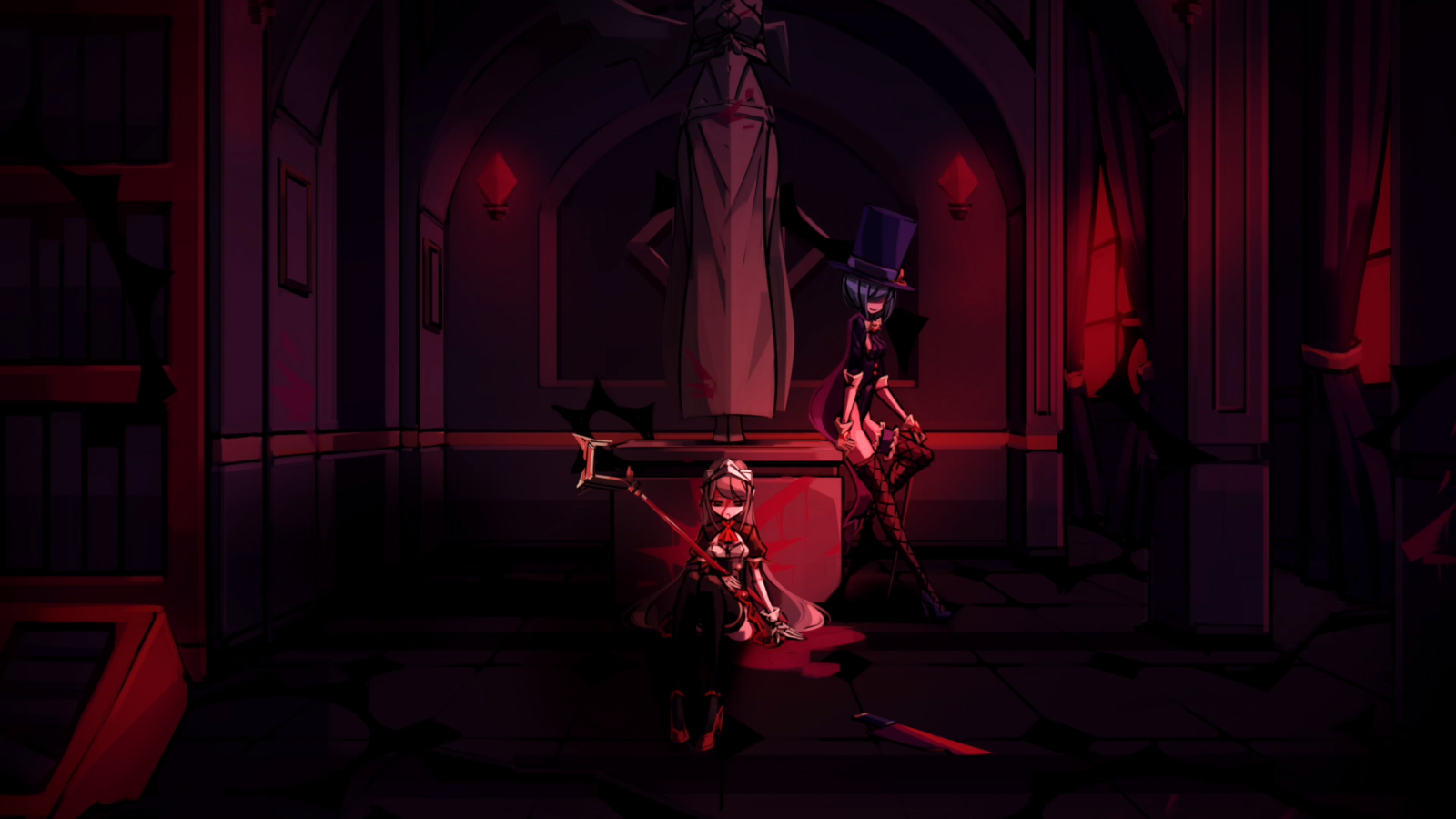 In Phantom Rose, you play as Reina who used to be a maid before everything went down. By the time we jump in, Reina is dying. A Phantom must have gotten the best of her, but this is not the end. Right before Reina would have died, a mysterious woman appears. Giving some words of encouragement (I hope), she gives Reina a way to turn back time. Now without the worry of death, Reina can explore the ravaged mansion for her missing master. 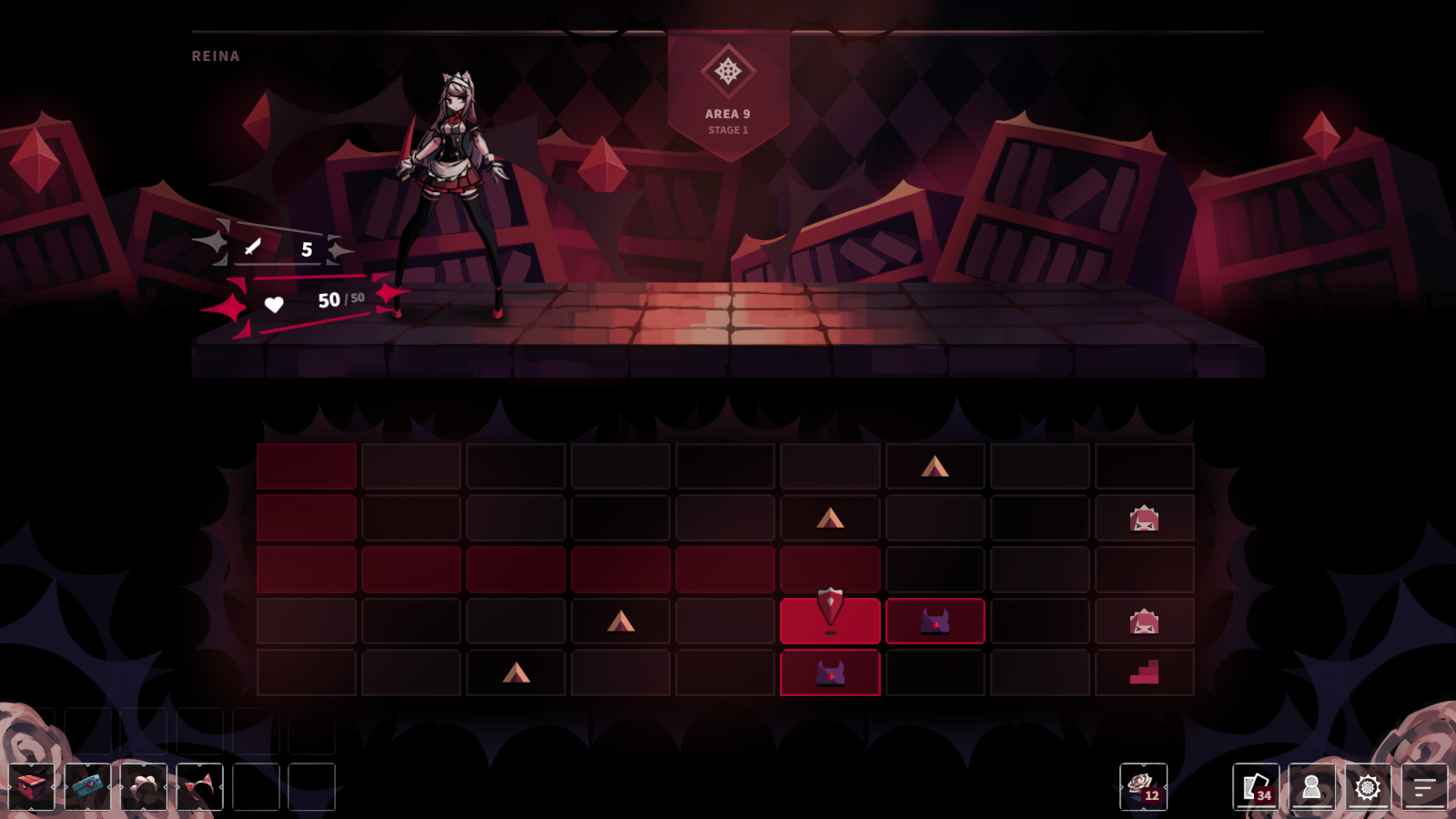 Let’s get right into it! When you first look at the map, it looks confusing, especially when you’re used to predetermined paths being made for you. In Phantom Rose, you have a grid map that only allows you to go forward or down. Most of the rooms are hidden unless it could be your next one, with camp sites, exits, and distressed maids being the only ones you can see at all times. Though, there are some items you can come across that reveal certain locations. Other rooms may include a shop, treasure (where you will need to do a minigame to get an item), a random event, or an area where you can search for items or find Phantoms.

Just be mindful of where you’re going. If you find yourself at the bottom of the map grind around the beginning of the , you won’t be able to avoid any future Phantom rooms. 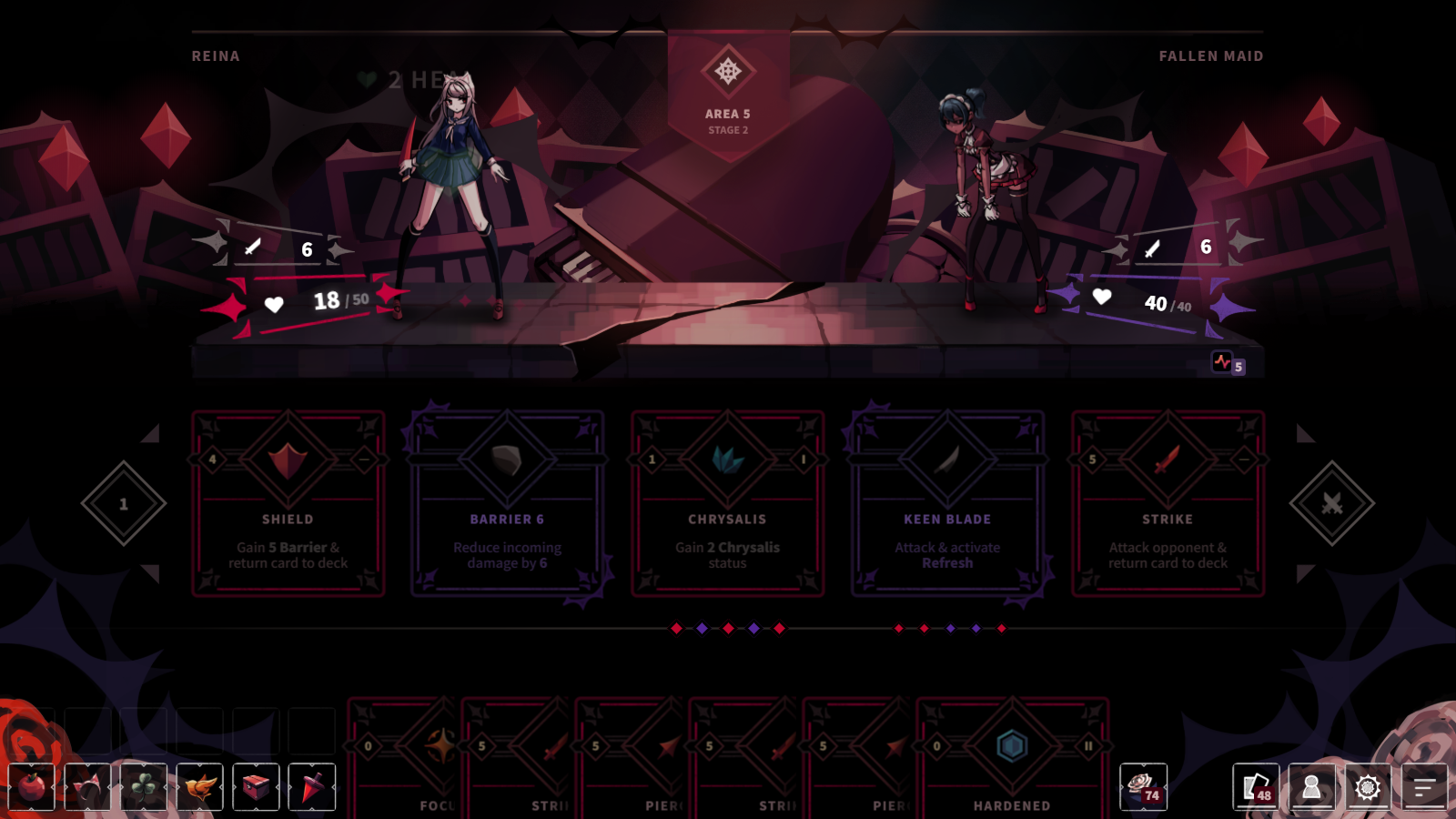 Once you inevitably run into a room with a Phantom, it’s time to fight. Each phase, a card field will take the Phantom’s and your cards out ready to activate. While you do have three cards on the field compared to a Phantom’s two, the cards are activated from left to right. The good thing is, that the cards automatically drawn for the field are not set in stone (yet). If you’d rather play a card in your hand, you can switch it out with one of your cards on the field. However, once you do that card will be locked in (as well as the card that’s now in your hand). For situations where you don’t want to play either, you can instead use Soul Roses (which is Phantom Rose‘s currency) to redraw a card in your hand. In addition, you’re also able to unlock locked cards in your hand with Roses if you just wanted to switch the order. If you do run out of Roses, you can risk it and use your health to redraw. Considering that card order matters, make sure you don’t preemptively press the battle button. Right under the field, you’ll also be able to see the turn order for the next phase just in case you want to plan ahead. Once a Phantom is defeated, you’ll be rewarded with more Roses and pick between two sets of cards. 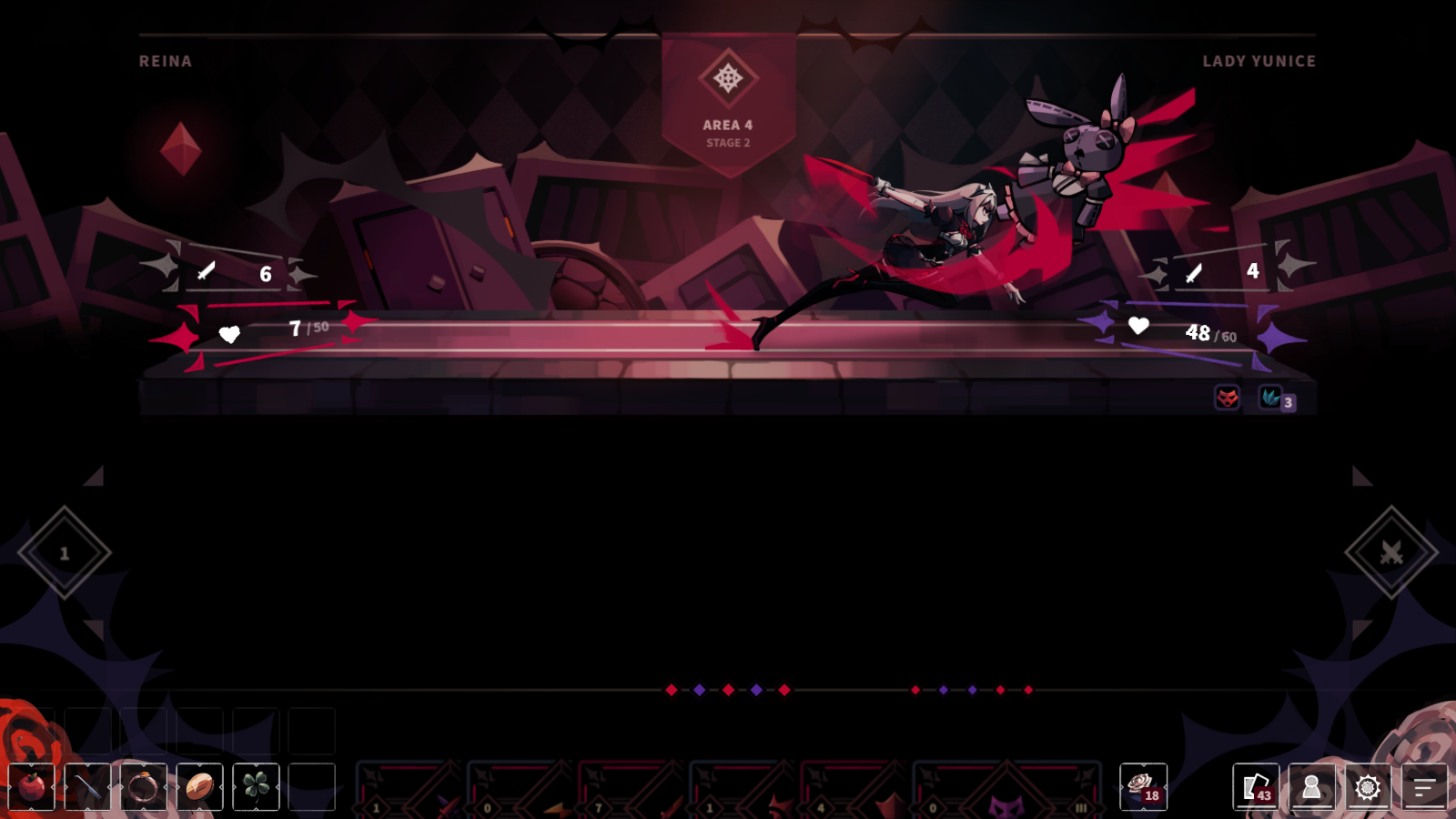 Every Phantom varies in difficulty and has their own buffs that will require you to adapt your strategy around them. However, there are special Phantoms. When you go into a maid room, you’ll be faced with a mini boss (Mini Phantom? Teddy Phantom?). If you manage to defeat it, the maid will be successfully rescued and you’ll receive extra roses, extra cards, and an item as a reward. Then, you just have Crowned Phantoms, or the stage boss. Before you face off against a Crowned Phantom, you can let Reina rest so you gain back your health and go through your deck; or you be reckless and ambush them (dealing 15 damage from the get go). Defeating a Crowned Phantom will net you a whole slew of cards, Roses, an item, and a stat increase of your choice when advancing to the next stage. 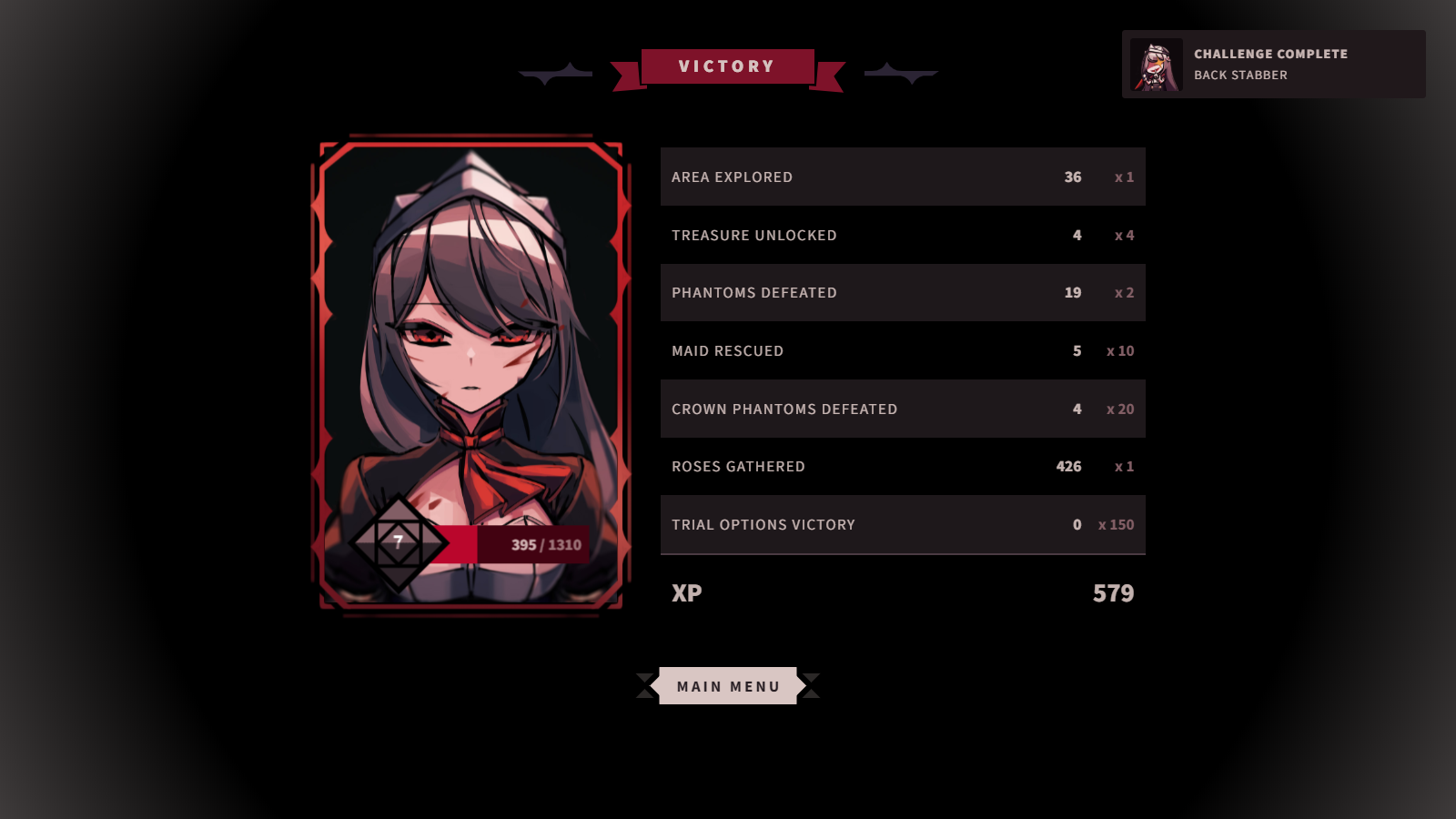 The main mechanic that separates Phantom Rose from, say, Slay the Spire, is that your cards are removed once used aside from your standard Strike, Shield, and Heal cards. I won’t blame you if this scares you away, after all I was kind of skeptical on how good this could be. However, I can assure you that this is handled pretty well. The card rewards offer multiples of the same card and you know how rare a card is depending on its spell level. While Reina camps, you can dissolve cards for two Roses to trim down your deck or duplicate cards (with Rose price depending on the spell level). Not to mention that random events can grant you cards, some items will add a certain card to your hand at the start of battles, and you can buy cards at Ariel’s store (where you can also redraw available cards at least three times). As long as you’re open to learning how to play with this mechanic, you’ll do fine. You’ll get better with each run as you fight more phantoms, learn what’s ahead, and when you should save a card or use it. Sooner or later, you’ll find yourself suddenly at the last Crowned Phantom. Heck, my first win was when I was just trying to save maids and was ambushing all the Crowned Phantoms for fun. And this is coming from someone that has 60 hours in Slay the Spire, but yet only have one real win.

After each run, you’ll get a list of what you did and you’ll get XP accordingly. This goes towards your Rose Lvl, which unlocks more starter items for your future runs. When you start future runs, you’ll also get the choice of choosing a random stat upgrade or a card you had previously. 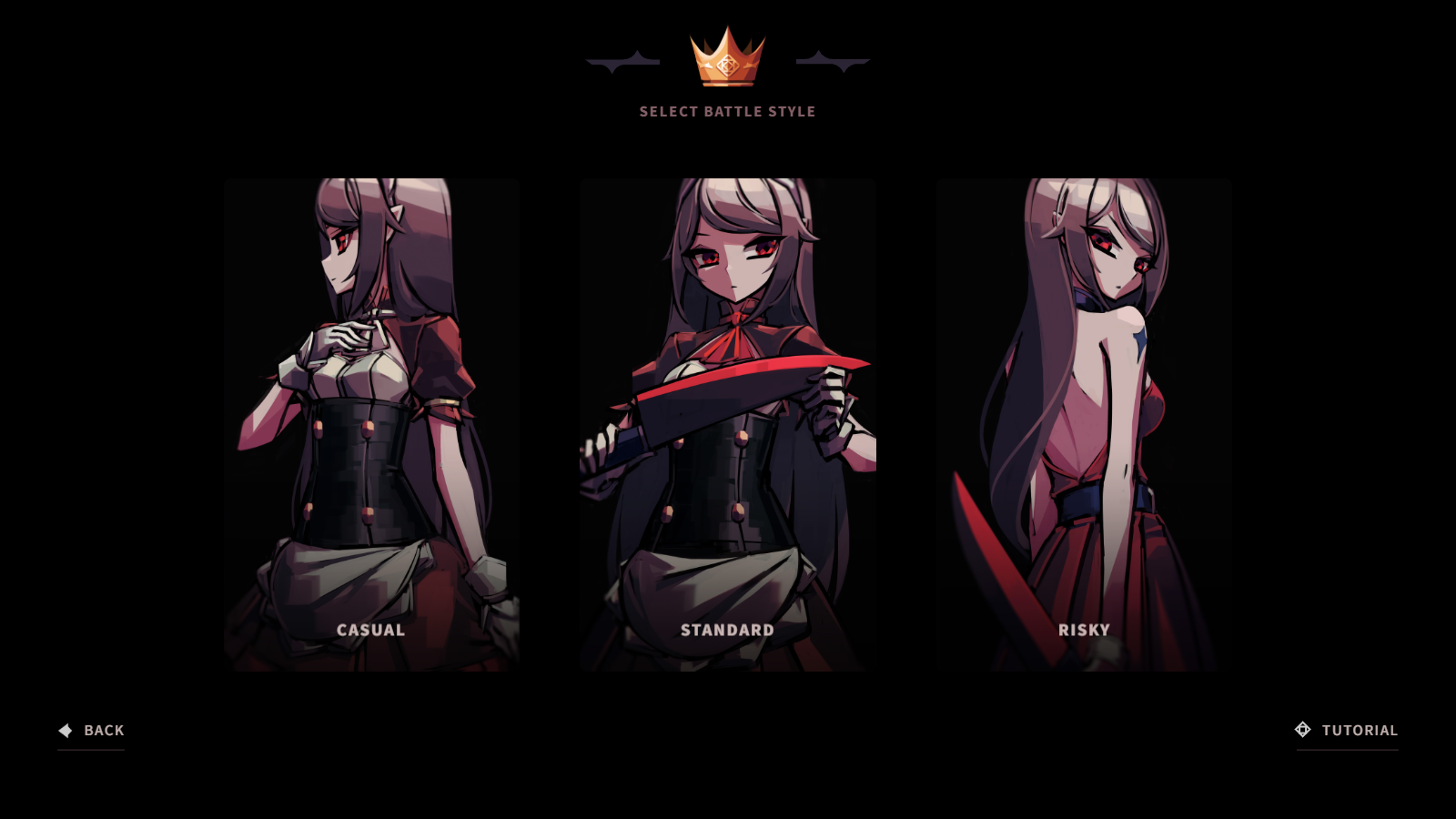 Phantom Rose has three different difficulties for you to choose from. You’ll only be able to play Standard at first, but it doesn’t take long before you unlock another difficulty mode. After you get your first couple deaths, Casual mode will be available to you. Casual makes it easier to defeat Phantoms as they will have less health, your deck limit and luck will be higher, and I believe Phantoms won’t use some cards. Don’t take my word for the last bit as I’m not too sure, but I remember Lili, one of the Crowned Phantoms, using a card on Standard that I didn’t remember her using on Casual. The downside is that the challenges are disabled and, by extension, your stats are not carried over. So unless you don’t care about officially completing challenges, consider Casual as practice. Just make sure to switch to Standard before you get to the end. After all, I wouldn’t want to barely get my first victory before realizing that I was on Casual.

Challenges are just like the name suggests, challenges for the player to complete. While these are mainly in-game achievements, some challenges will unlock costumes that Reina can wear instead of her default outfits. 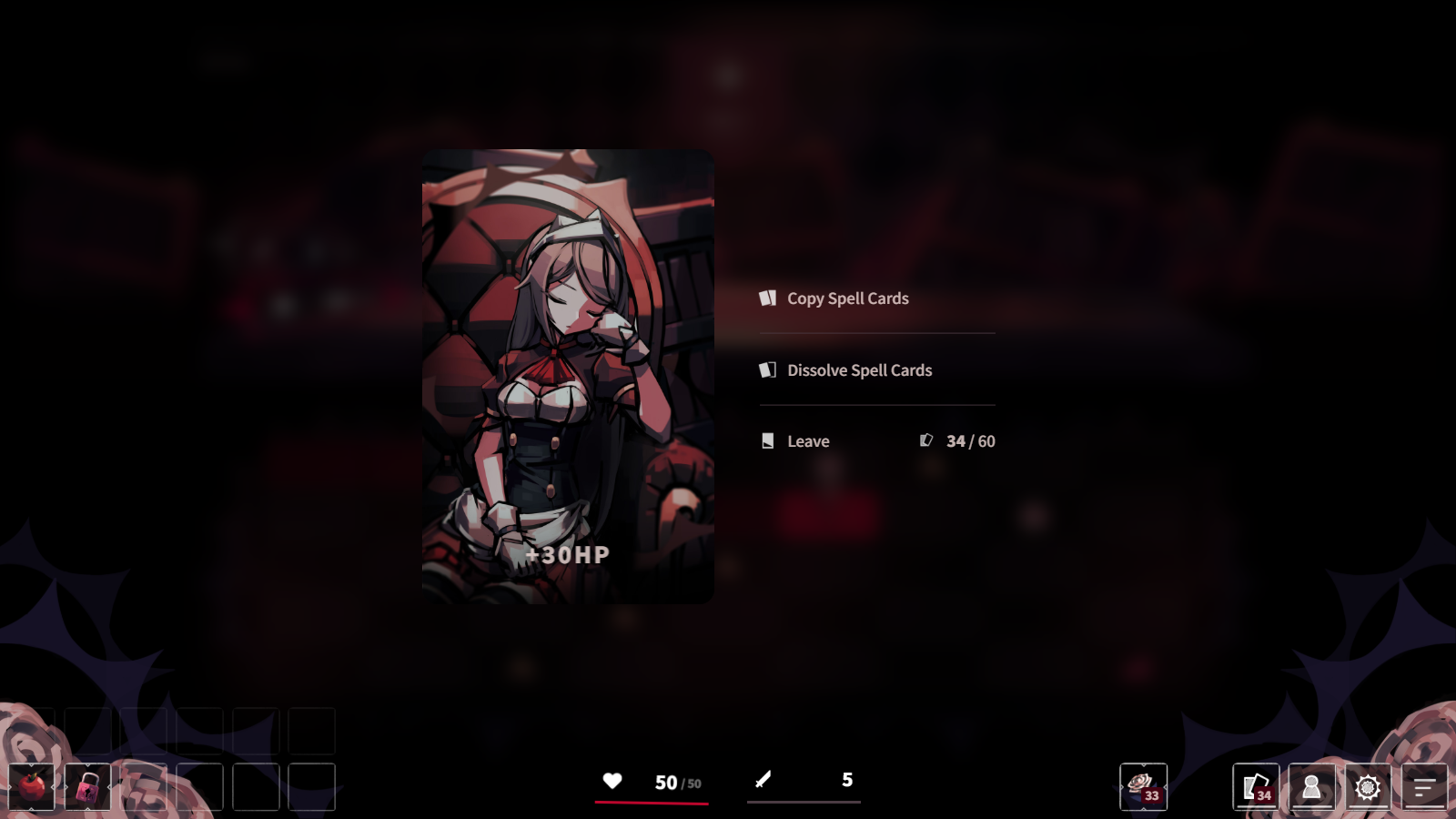 Once you get your first victory on Standard, the last difficulty is unlocked: Risky mode. Just by the name you can deduce that this mode is difficult and it certainly is. Your health is drastically reduced and both you and Phantoms have permanent buffs. Reina will have the Mana Link buff, which will increase your attack whenever you play a non-attack card, but your attack will drop whenever you attack. In addition, the Phantoms have the Calm Mind buff which will increase their attack if you didn’t play an attack card that phase. So while you still have to strategize on when you should use certain cards, you now have to deal with these new buffs. You can’t exactly fill in slots with the standard Strike cards anymore, you might as well be fighting them with a balloon knife, so you’ll probably see yourself using cards that you normally wouldn’t have with some items becoming useful. 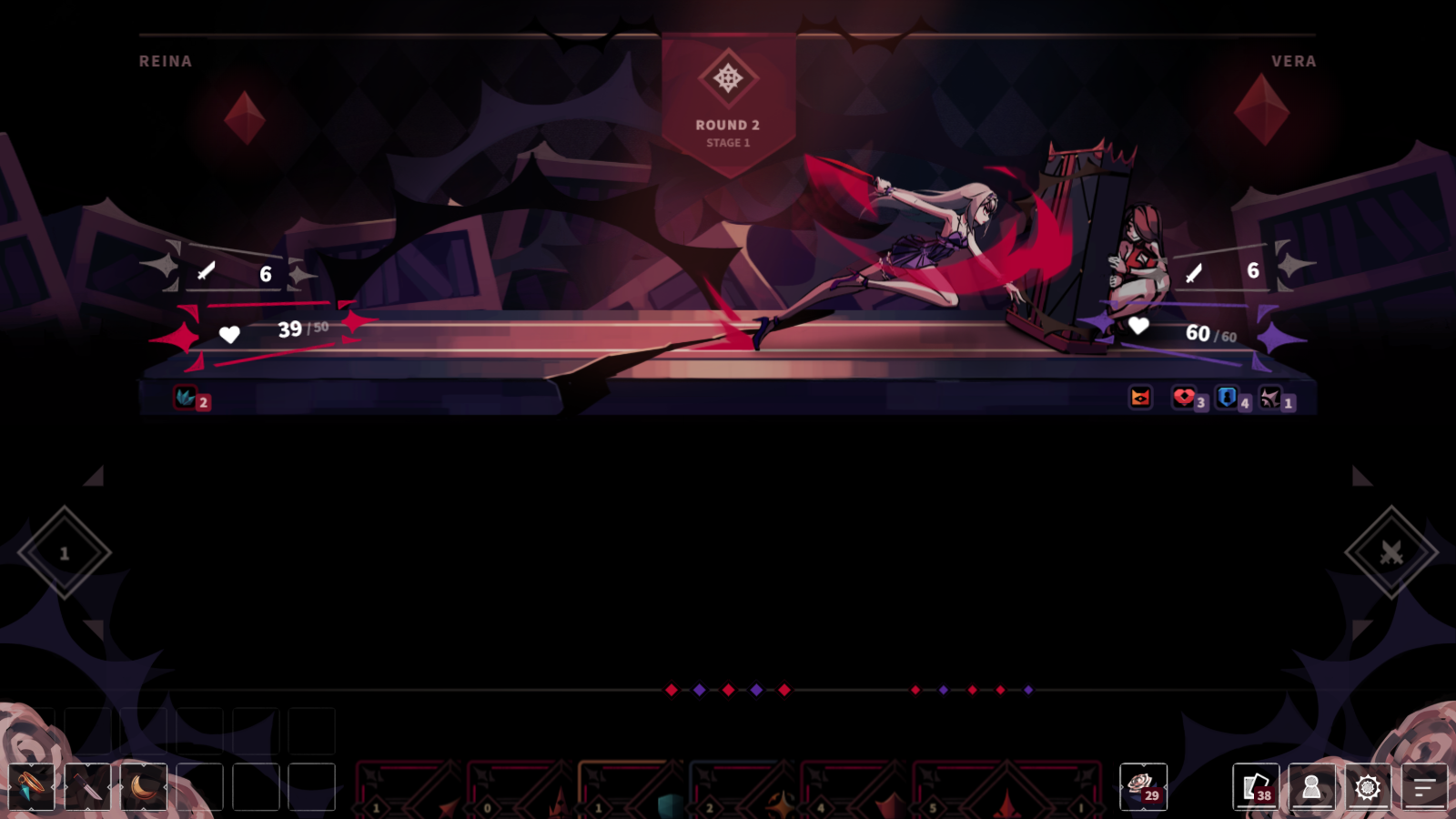 You want to be challenged even more? Once you get your second victory, the Crown Trial will unlock. The Crown Trial is basically a boss rush mode. Instead of going through a whole stage to get to the boss, a stage will consist of four random bosses. Thankfully, you are healed between each round. As you advance to the next stage, it will get harder as more modifiers are added.

If you’re not in the mood for Crown Trial (or only wanted to complete the challenge), but want the regular runs to be more difficult, that’s not a problem. Once you unlock Crown Trial, a trial options menu will become available while you’re picking out your starting items. If you manage to win that run, you’ll get some extra XP for your struggles. 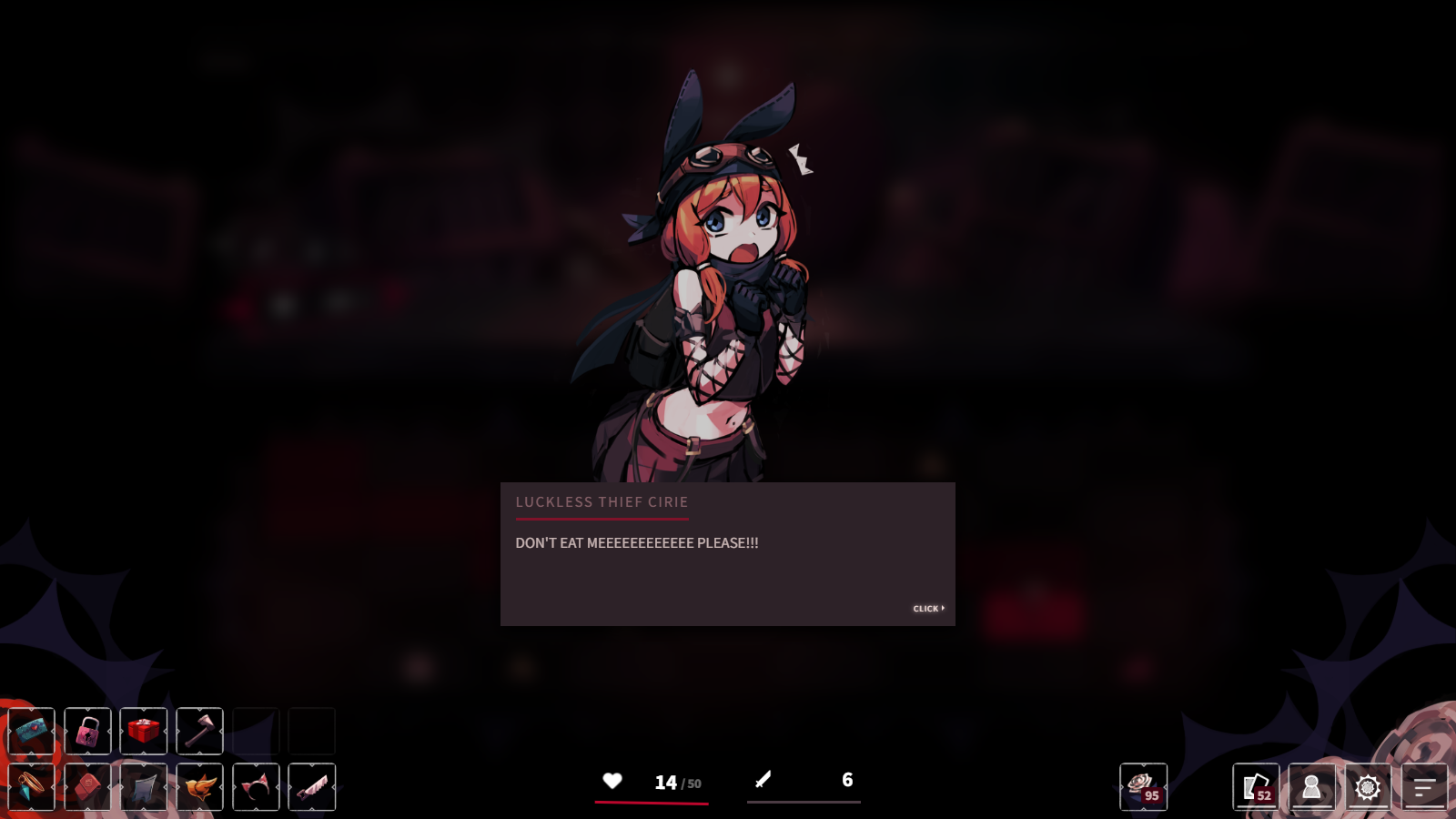 While I wasn’t able to play Phantom Rose on release like I planned to, I was keeping up with its news. To my surprise, it got a good handful of patches during the first couple days. I don’t know about anyone else, but seeing a developer patching out bugs as soon as they can and managing to bring out balance changes (and even new cards!) is a good sign. Not to mention that the developer is open to feedback so they can make Phantom Rose the best game it can be. With any game getting balance updates, there’s always a chance of a change being disappointing compared to how it was before. While I can’t speak for the balance changes before I started playing, I didn’t have any complaints towards the one that happened after I started. I even thought that some changes were for the better, like Chain Strike getting a revamp. It was also easy to adapt to the new card changes, but that might have just been me.

Considering that I was already following Makaroll for their artwork, it’s not surprising that I love Phantom Rose’s art. It manages to bring in cute designs without forfeiting the mysterious, dark atmosphere surrounding the mansion. Reina and the Phantoms also have their own artwork for when they attack, get hurt, and when using specific cards. Some delightful piano music also accompanies you as you venture through the mansion.

Despite bringing in a risky mechanic in the form of consumable cards, Phantom Rose manages to pull it off. With the help of players giving the developer feedback, and the developer taking it into consideration when balancing and adding in new cards, this turned out to be a great card game. I absolutely loved playing Phantom Rose even when I was still learning the ropes. While yeah, it would be nice to get more piano pieces and some extra animation added in, Phantom Rose is still fun to play. If you’re a fan of card games (or play them despite being terrible at it), and open to learning how to play with an everchanging deck, Phantom Rose will certainly not disappoint.