Physicists get into so much trouble

Trüberbrook is a gorgeous adventure game and is painstakingly rendered well, but upon completing it I did have some mixed feelings. I found Trüberbrook to contain several nods to games I’ve played over the years, and it follows many of the usual exploration and puzzle based aspects with a strong emphasis on the narrative story.

I also found it streamlined, with a very easy to follow method of solving puzzles where the thought process of combining items is eliminated by auto-choosing the items for the specific puzzle. That may or may not be something every adventure gamer enjoys, as for many the whole idea of figuring out the combination of items is one of the best parts of adventure games. So, this feels like it is geared at casual puzzle gaming in a sense.

And yet, it is not. The game is definitely an adventure game in the old school sense. There are no lengthy animations and expositions here, this is straight up “move around and explore until you find every last thing” sort of gaming. This method works fairly well as it is tried and true, and the game perhaps leans on the easy side of things if anything. Yet again, I feel like it is directed with its sights on making the puzzling somewhat easy to solve, even though this is in the vein of the Monkey Island type of games.

At that point, things became a bit oddly out of focus for me. One one hand, I seriously don’t think this is a casual type of game because the core aspects of adventure games tend to be more tedious than most gamers can tolerate. I’ll be frank, some adventure games can make me sleepy and this is no exception. On the other hand, it is a bit too easy for adventure game veterans who, for instance, may have played through the entire Deponia Complete Journey and got their mental chops callused on puzzles that are hard as hell. It is situated somewhere in the middle. 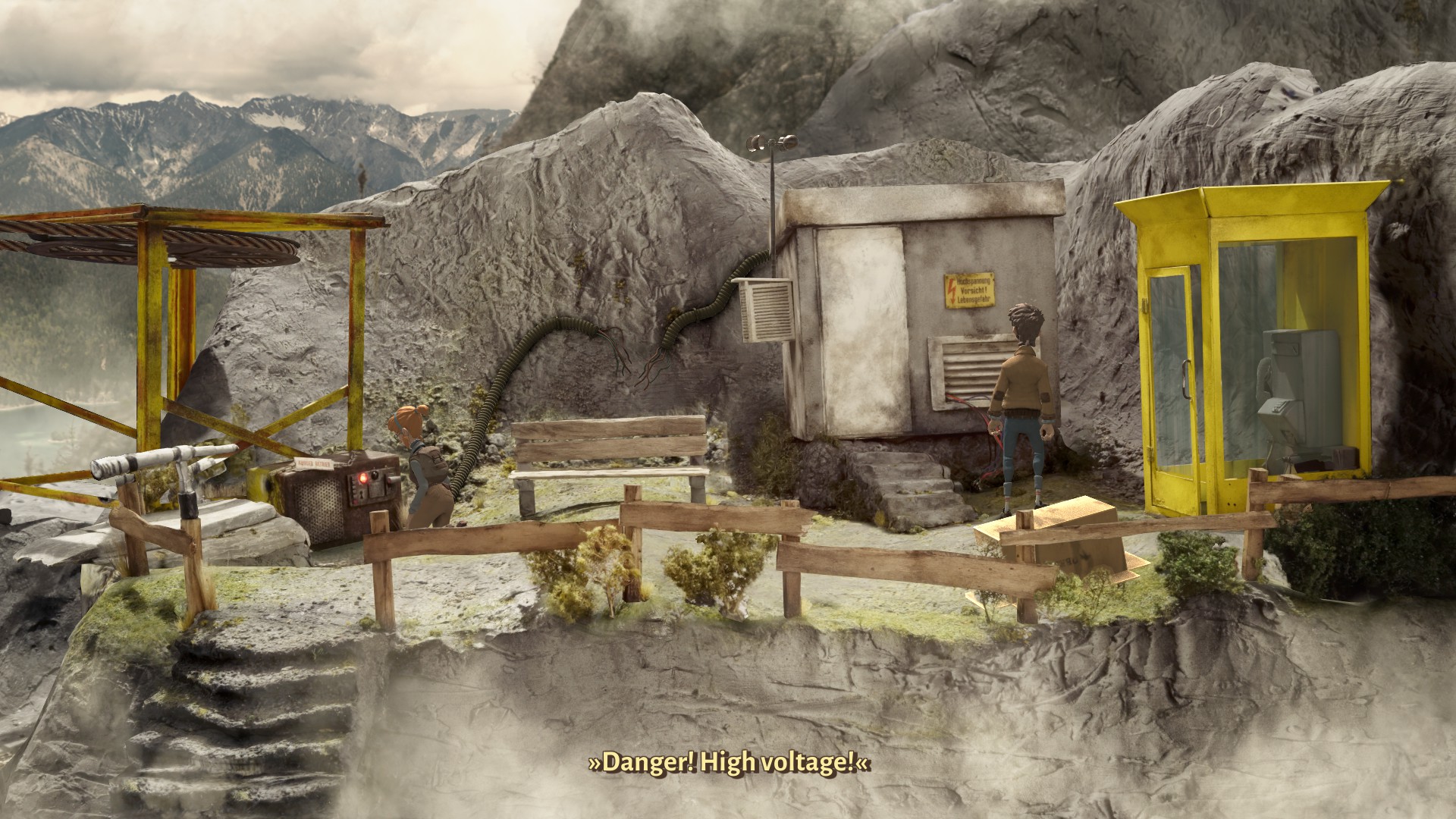 The core of the game focuses on Hans Tannhauser, an American physicist lured to Germany with a winning sweepstakes ticket for a vacation contest he never entered. He stays in the town of Trüberbrook and a mysterious person breaks into his room, stealing his physics notes. Your goal is to uncover who stole them and find out why by exploring the town and talking to the inhabitants. The town holds some secrets to reveal and there is more to the characters involved than meets the eye. I can’t really tell you any more than that because the game is somewhat short, with a playthrough coming in at around 5-7 hours give or take. 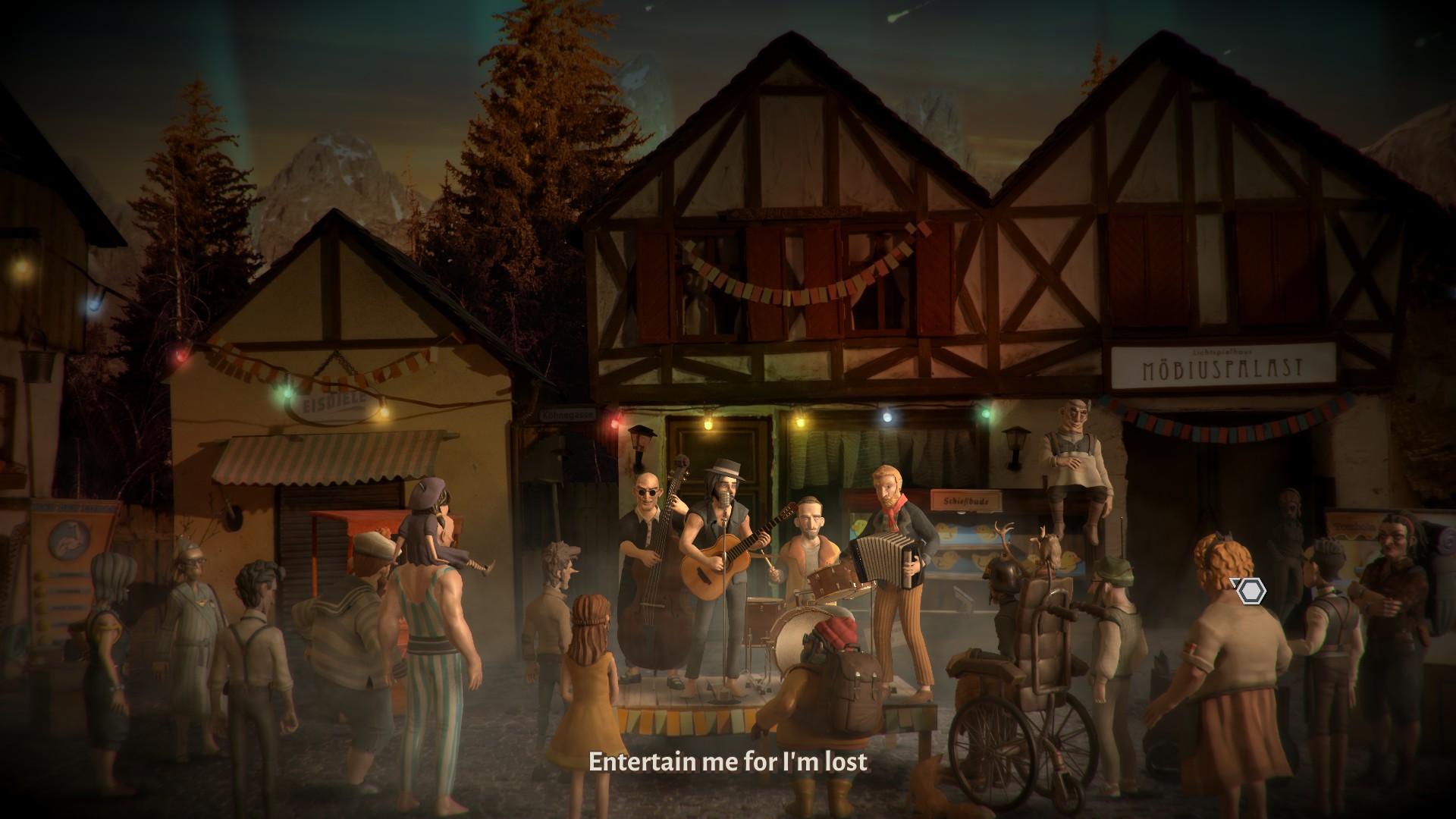 Now the puzzles are not overly easy, but nowhere near as tough as I was used to. That said, I did get a little stuck in the asylum until I realized how obvious the answer was in front of me. That was good, and once I got past it there were some rather entertaining sections right after. The only other puzzle that I got stuck on was a code for a telegram, and while I could find a solution for one part of it, I had to guess the rest of it after a few attempts, which was a little frustrating but nothing out of the ordinary for an adventure game.

I’ve seen some complaints from folks saying that they didn’t like having to backtrack so much, click on everything, and that the puzzles could be oddly unintuitive. I’m sorry, but isn’t that what adventure games are about? If you don’t like doing those things, then don’t play this game or any other adventure game like the Blackwell series, Edna and Harvey, or the Runaway games because those are some of the toughest “click, backtrack, and try every single thing” type of games I’ve ever played. As for unintuitive, there are clues all over the place and in one case even highlighted. It is not too hard, trust me. What it is, however, is repetitive because there are so many inventory puzzles that once I got to a non-inventory puzzle I was rather surprised. This makes the game drag on and on to the point where it becomes a grind to get to the ending. 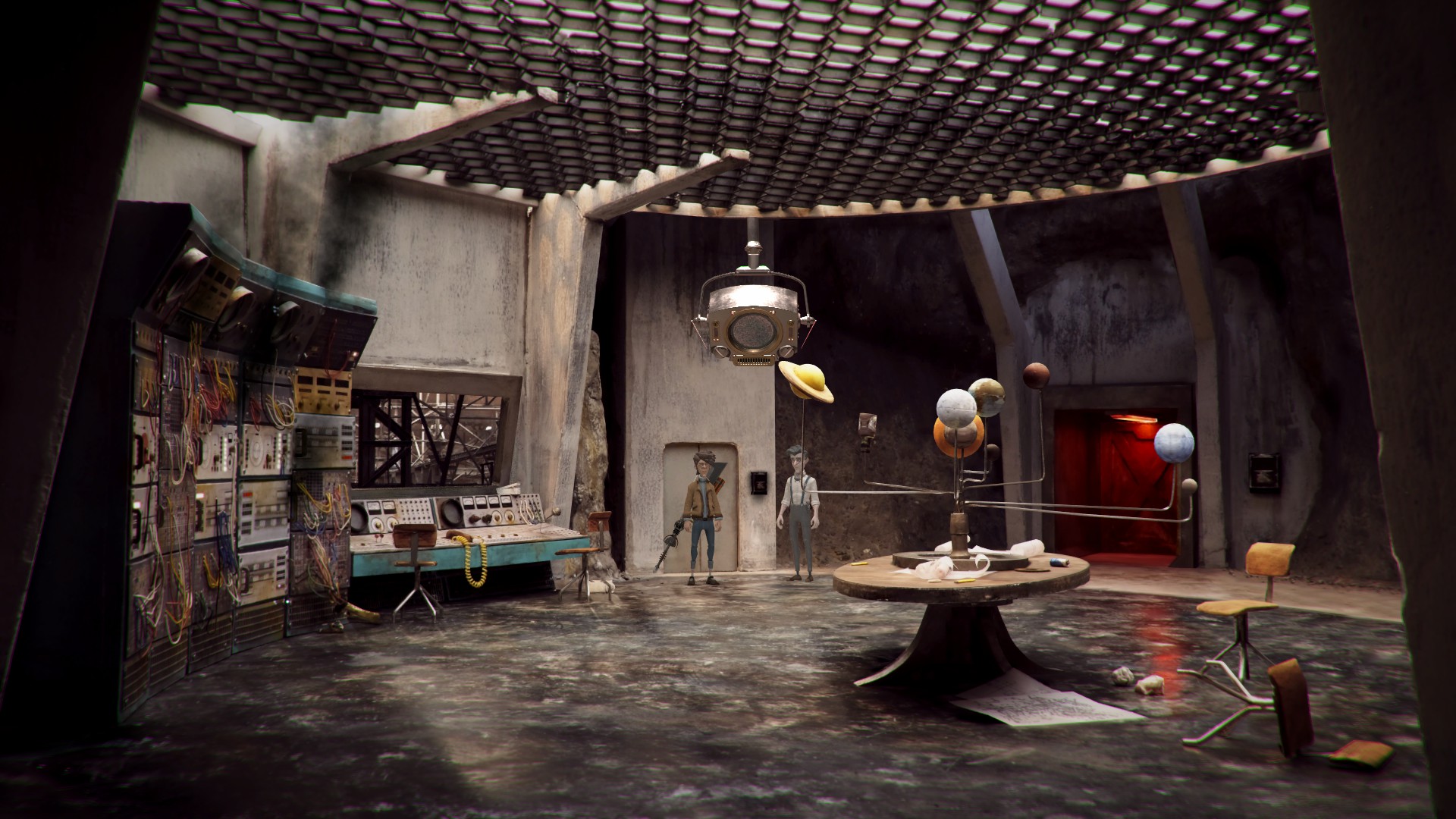 It wasn’t for lack of trying. Even with the typical multi-area grand puzzle at the end where you visit the same places over and over until you discover a missing item you overlooked to get to the next stage, I never felt it was a “wow, that was insanely tough” or “my brain has been liquified” sort of game and that rang true to the end.

It puts Trüberbrook in an odd place because I think some folks playing this game may say it is a bit tedious and I’ll go so far as to say non-vets may not have enough adventure gamer’s intuition to figure out a puzzle quite so easily, leading to frustration because there are a few puzzles that are not terribly obvious unless you’ve seen something like it before.

Adventure game addicts, though, will think this is just too easy with no need to even combine items. This is a tough wire to walk across and truthfully I’m not sure many adventure games have ever courted that “accessible yet not too easy” line very well. Casual games tend to get more and more casual, which was the sad way things followed for Telltale, or great adventure games tend to be harder than most folks have the patience for. Trüberbrook is smack dab in the middle, and I think I see what they were trying to do, I’m just not sure it meets the expectations of folks eyeing the game. Given the presentation of an old school late 90s adventure game along with actual set built locations, I would say the game should have focused on more entertaining puzzles and situational circumstances that keep the player engaged enough to keep playing rather than exploring back and forth non stop until you finally find a tiny item that you have to squint to see in order to progress to another area. 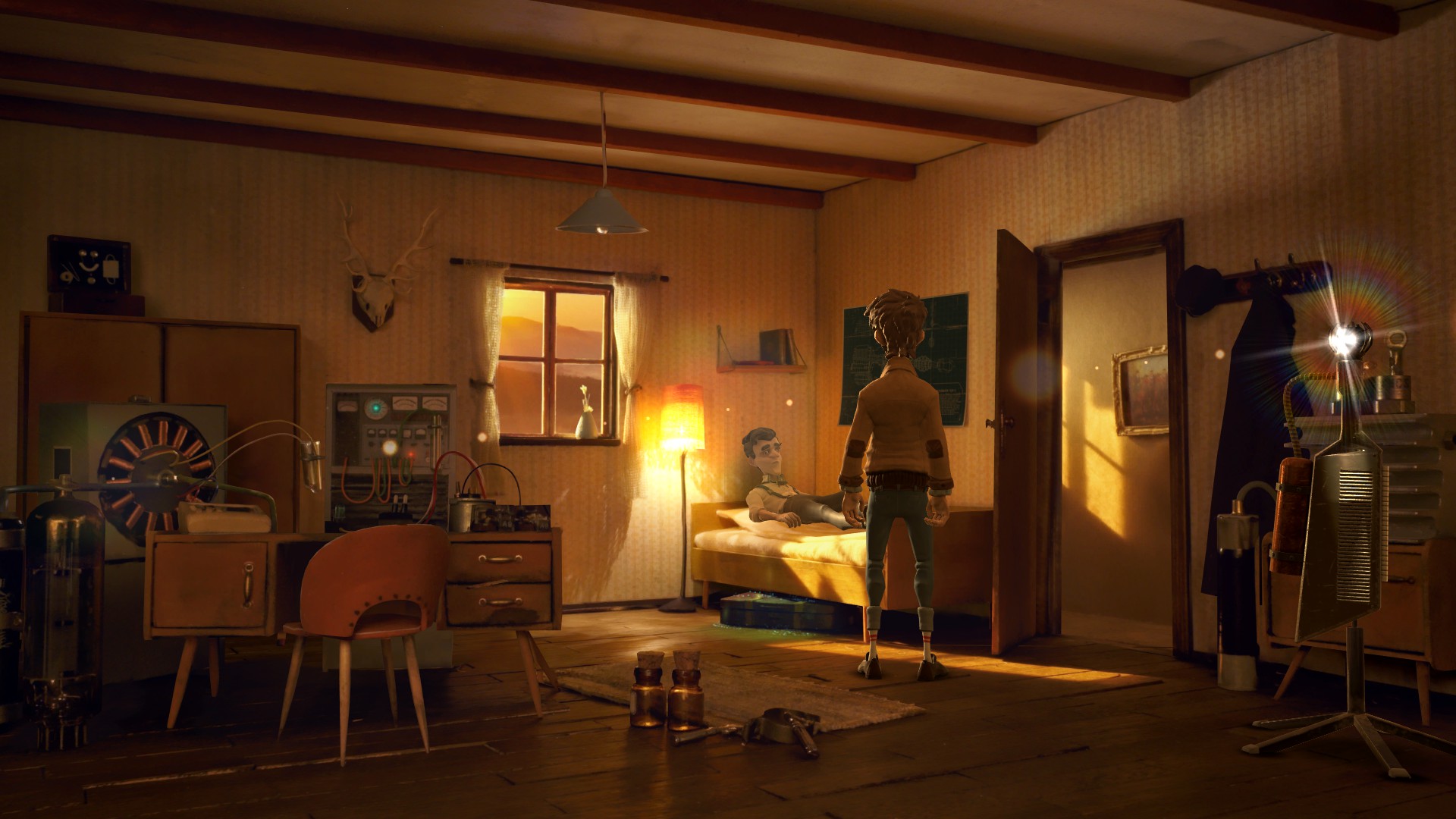 What can save a game at this point is the narrative and engaging character development. Provide an epic story with some funny bits, drama, action and character development and you’ve got some saving graces even if the puzzles aren’t fantastic. Yet, here Trüberbrook falters the most. It is lacking in charm. Maybe there was difficulty with the translation, and some of the voice acting was less than desirable to the point where I switched to German audio. I even preferred it to be honest even if I don’t speak German, but the subtitles went by so fast I couldn’t keep up. It was back to the English audio at that point.

The characters never quite shine. Now, in adventure games you don’t need huge backstories revealed with super long cut scenes and it is not a visual-novel JRPG with 40+ hours of content to read. You just need an intriguing lead, some mystique or comedic elements, and connecting events that allow you to fall down the rabbit hole of the storyline. Since dialogue is based in small snippets, content through brevity is key. You have to bring out the character’s personality through word choice and how they ask questions. I really wanted to get into it, but I never felt a connection to anyone. I’m not sure if it was the way it was written, or the direction, or maybe just the voice acting, but it never grabbed me in the least. There were also several jokes throughout, but they mostly fell flat. Not that it is an easy thing to do, but I just didn’t laugh at many of them. Perhaps it is just that German humor eludes me, I’m not sure. I really wanted to get into the story and characters more, but ultimately I wasn’t drawn in like I wanted to be at any point in the game. 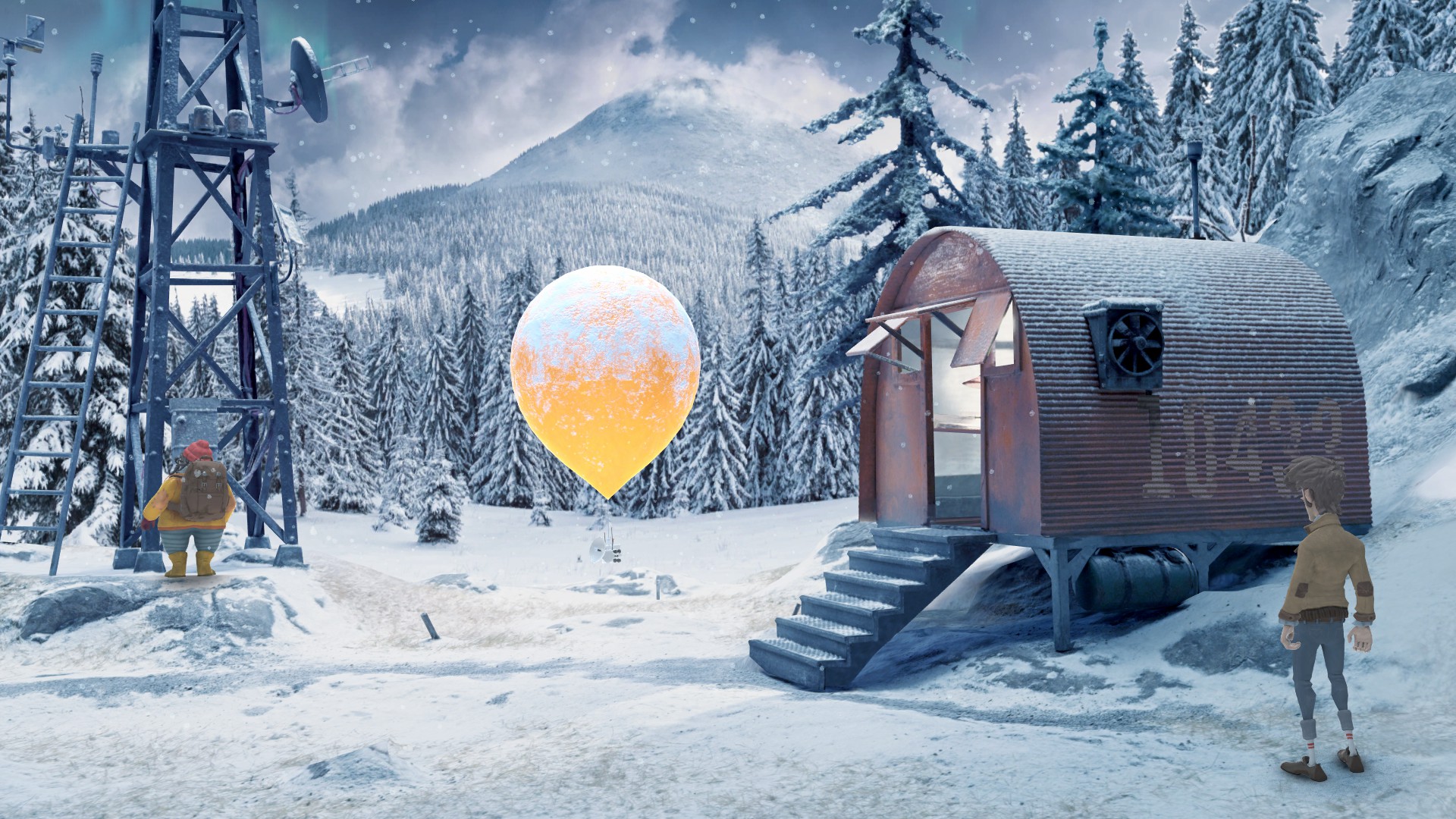 One thing I also have to mention is that there is some pixel hunting involved, though it can be avoided by simply pressing the spacebar to some degree. When you do that the selectable items have a red X on them, but it is such a teeny tiny X that my poor eyes would still miss the item and I’d have to go pixel hunting to see what I needed to click on. I probably lost an hour or more from not being able to see well.

For those that only play an occasional adventure game, you’ll likely feel comfortable as it has some fairly accessable puzzle stream-lining that helps to speed things along. That said, the presentation is still old school 90s style, so keep in mind that the game is not a walk in the park. You’ll have to put in time to walk over areas repeatedly just to progress and there are a few puzzles that may not seem obvious in the least unless you’ve come across a similar puzzle in the past. Expect a lot of back-tracking for hours.

If you are an adventure game vet, I don’t really think Trüberbrook will appeal to you as the puzzles are simply too easy for anyone who plays games in the genre regularly. You may even finish in a single night.

While I very much enjoyed the graphics and sound, the puzzles never came off as overly clever or incredibly well designed. It is good, but not great and for a long chunk of the game I felt like it was something I’d perhaps play on my phone on the train rather than on a PC because I was barely engaged in what I was doing. The incredibly long series of inventory puzzles just drained most of the fun out the game. 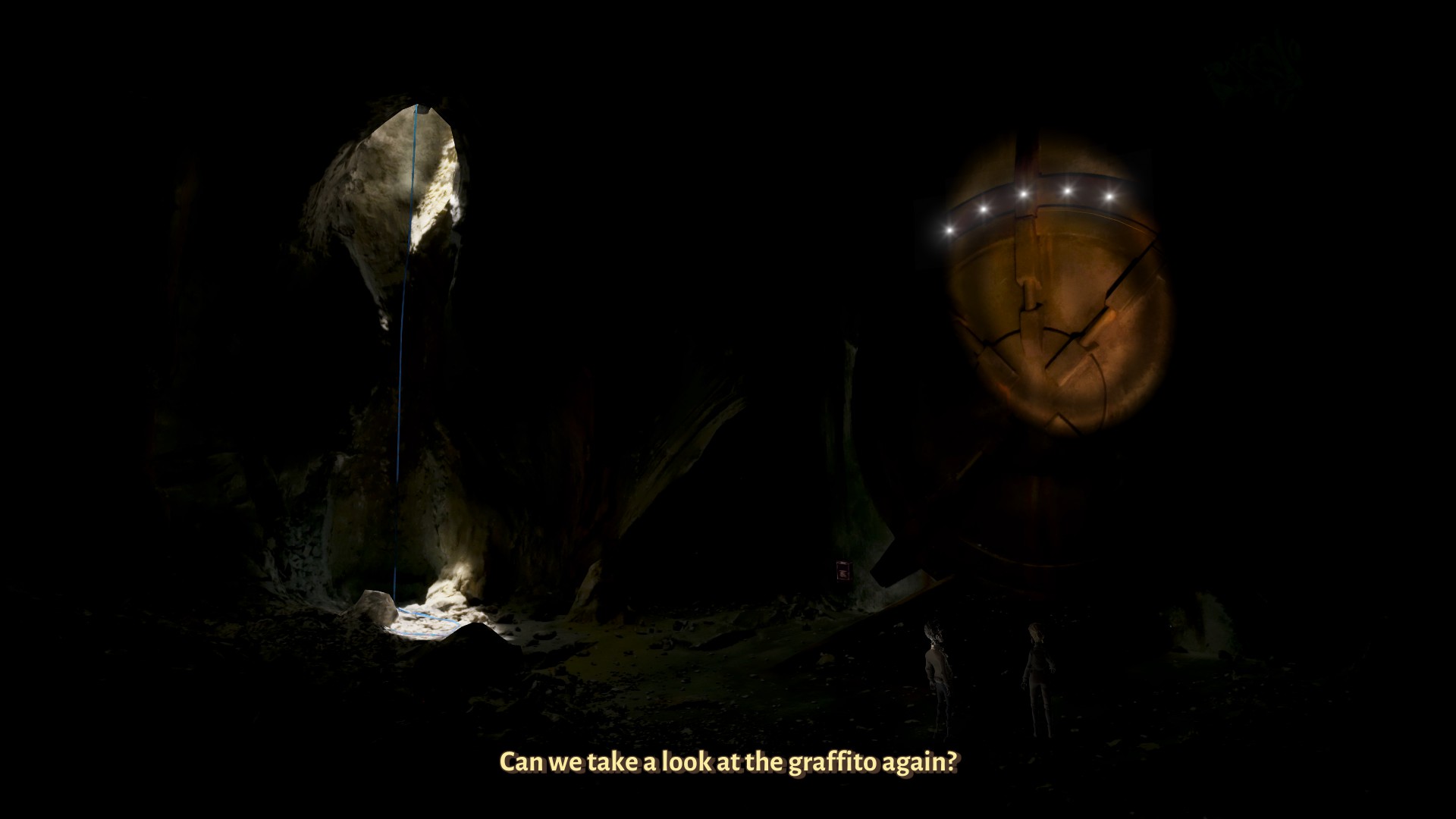 Trüberbrook sits on the precipce of a Save for Later and Pause rating, as it certaingly didn’t entertain me the way I was hoping for. The story was well done, but wasn’t interesting or charming past the first few hours and the voice acting didn’t exactly help either as the voice direction is certainly missing something. Once it got to the grand puzzle section where you traverse the set areas dozens of times repeatedly, the game stalled and became a chore to complete with only one fun bit at the end.

I do have to say it was a stable build. I encountered only one bug in my whole playthrough. That was when I came back from the swamp, I was glowing green for some time and I even thought it may work as a type of illumination, but that was just a glitch to my dismay.

My final rating is a Pause overall, mostly because I can’t say it is something everyone will enjoy to the end. The game is well done and doesn’t skimp on production or design, but it just isn’t as captivating and fun to play as it looked like it would be.