If turn-based Doom with lots of swearing sounds good to you, then Jupiter Hell is probably worth a look

Jupiter Hell is a top-down turn-based shooter from indie developers, ChaosForge, the team behind DoomRL and other “roguelike” game mods. Jupiter Hell is their first title on Steam and, according to their home page (and not the Steam store page — perhaps they’re wary of treading on Bethesda’s toes), is the spiritual successor to DoomRL.

Note: while I acknowledge the world has changed and “Roguelike” (or “roguelike”) is now used as a noun by all the cool kids, I’m old and grumpy and refuse to bow to peer pressure. I grew up with Rogue, Moria, Nethack, and Angband. To me it will always be an adjective: “Rogue-like”. Now get off my lawn!

The setting is not explained or described, but from the few little bits and pieces you can pick up, it seems that the protagonist has somehow found himself on a space station or moon base somewhere in the vicinity of Jupiter, and that base has been overrun with Doom-style demons, aggressive AI-controlled robots, and somehow-corrupted military personnel. I don’t know what the goal of the game is, but my guess is that it’s to progress through the levels to a final boss and then kill it. I haven’t got that far.

Before realising that Jupiter Hell had any relationship with Doom, I spent a few hours playing it. I came away with mixed feelings, but my clearest thought about it was that it was more like a top-down turn-based version of Doom than it was like a traditional Rogue-like game. After playing for a few more hours, that hasn’t changed, but at least now I know why.

In traditional Rogue-like fashion, the game is divided into a series of procedurally generated levels. Each of those levels is made up of rooms, formed from tiles. Though the game is displayed in 3D, the map is completely two-dimensional; there’s no consideration of height or depth. All characters can move only left, right, forwards, and backwards; there’s no diagonal movement, and character facing is irrelevant. Each level is initially covered in darkness (“fog of war” style), and enemy movements and objects are only visible when in line of sight — even previously explored and revealed areas are not continuously visible if they’re behind a wall or a closed door.

On the surface the game appears to be strictly turn-based, but the rather sparse in-game help explains that actually it’s timeline-based; each action takes a certain amount of time, meaning that the game time between turns is variable based on the actions performed. It’s a system that works quite well, but too much of the internal processing is hidden, making tactics and strategy more about guesswork and familiarity rather than logical or strategic thinking. 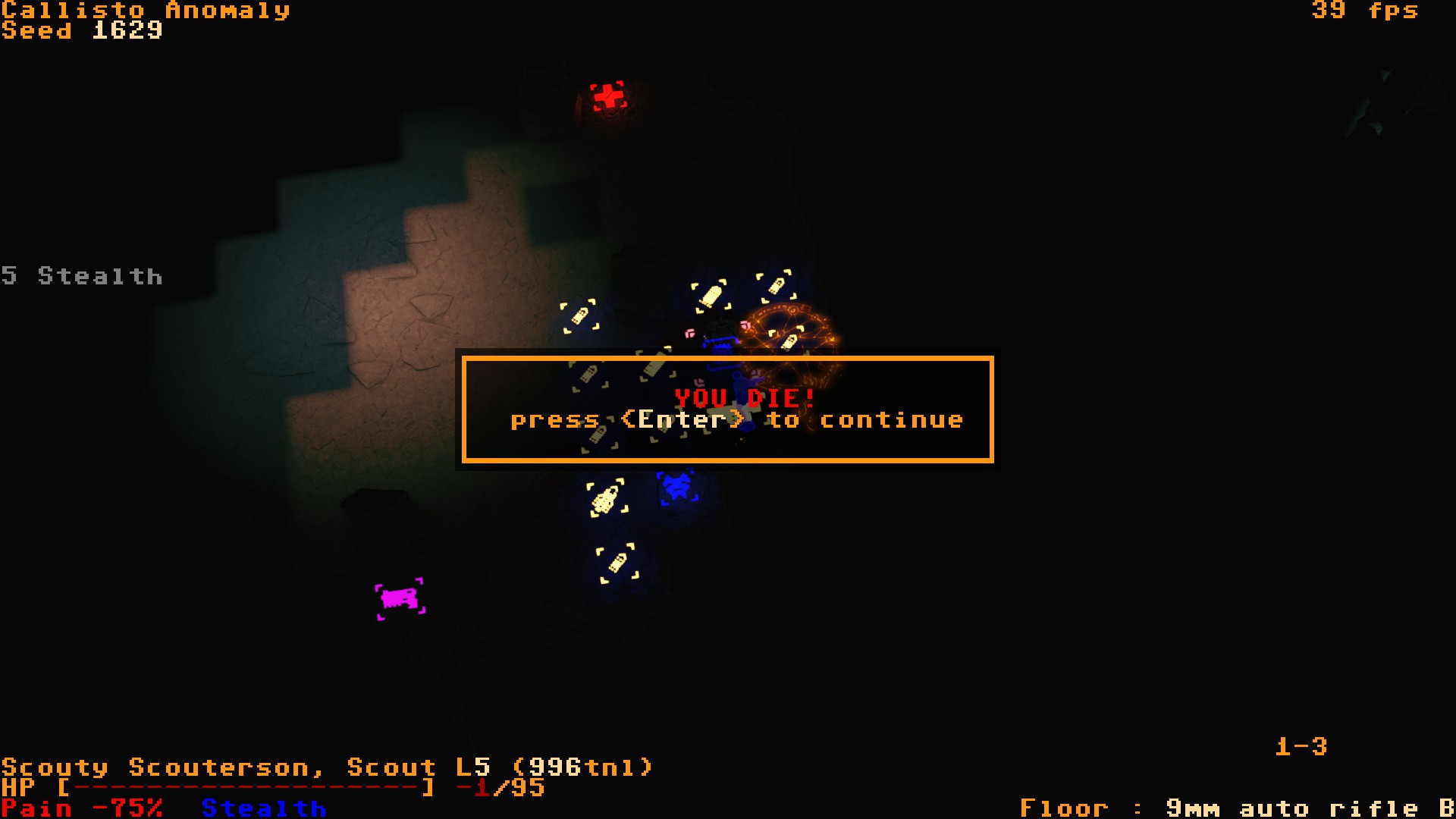 This is one of Jupiter Hell’s core faults: too many of the details are hidden from the player, reducing options and dumbing down the “meaningful RPG progression” claimed on the store page. So while, yes, it does indeed have some Rogue-like elements, such as turns, a procedurally generated map grid, and permadeath, the limited options available make it play more like a simple turn-based shooter than anything else.

The other big non-Rogue-like part of the game, to me, is its very limited replayability, at least in its current state anyway.

What I liked most about the early Rogue-like games was the seemingly endless variation: character types, monster types, maps, objects, scrolls, potions, weapons, armour, … . There was just SO much content, and so much to do, and so many different ways of doing it, that every game really was different; you could develop your own play style.

At the moment, Jupiter Hell is just so lacking in this regard. It has three characters to choose from, each with one unique passive ability and one unique active ability. All of the attributes for those characters are hidden, and there’s so little variation in items and equipment, and so few tactical options, that ultimately all three characters play basically the same. 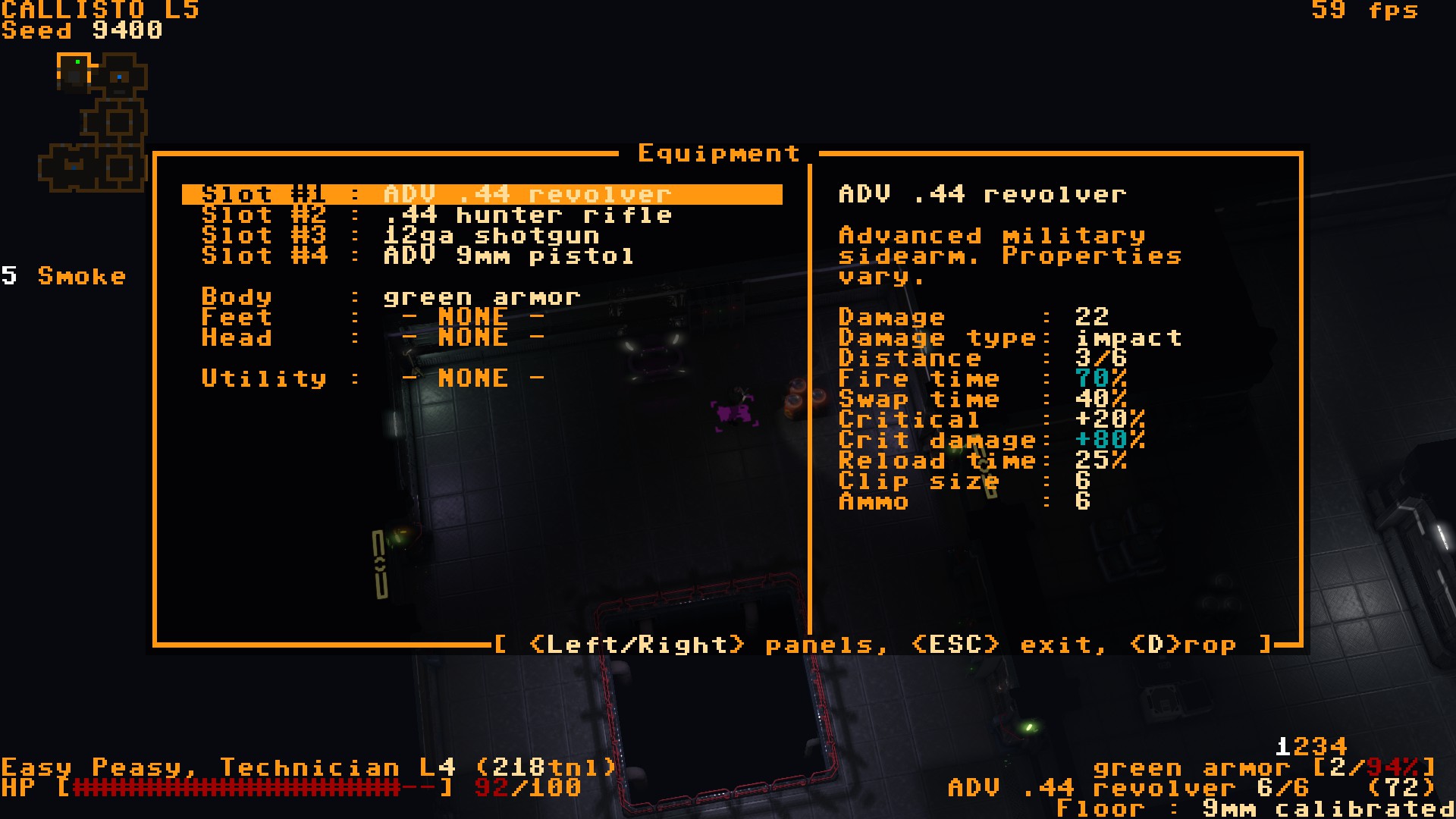 Sure, they each have their unique abilities, but being able to use each active skill only once per level makes it more of a gimmick than a serious tactical consideration. If the skills were on a turn-based cooldown or could somehow otherwise be used frequently then at least there would be a bit more variation, but ultimately all three come down to being a one-use-per-level butt-saver: heal a small amount, go invisible, or … go invisible in smoke. *sigh* What a missed opportunity! The developers claim it’s “Like chess. With shotguns.” It’s not.

Okay, so the characters are all basically the same, what about the world? Surely procedural generation must add a lot of variation? Well, you’d think so, but … no, not really. You see the game is divided into areas: spaceport, mines, Europa, etc, and each of these has a tileset with what appears to be a relatively small number of possible layouts of the tiles to form rooms, and only a very small number of world objects, with only very limited interactivity. So while in each game you might visit Europa L2 and it will be different to the previous, the layout will be similar enough that you’ll be thinking, “I’ve been here before.” It all starts to feel very samey very quickly, and that’s a very bad thing for a “Rogue-like” game.

The enemy variation is also limited, with only a handful of different enemies appearing in hours of play. Even worse, those enemies seem to drop exactly the same things when they die, so there’s not even any interesting loot to keep you occupied and spice up the game. And most of the time your inventory will be completely filled with ammunition and a medpack or two anyway.

It’s only in early Early Access, and the devs have implied that they at least plan to add “… more items, more traits and challenges, and […] more classes”. There may even be a bit more variation in the later stages of the game already. But at the moment, at least, there’s just not enough content variation to keep me interested to get that far. It’s too repetitive. Too boring. 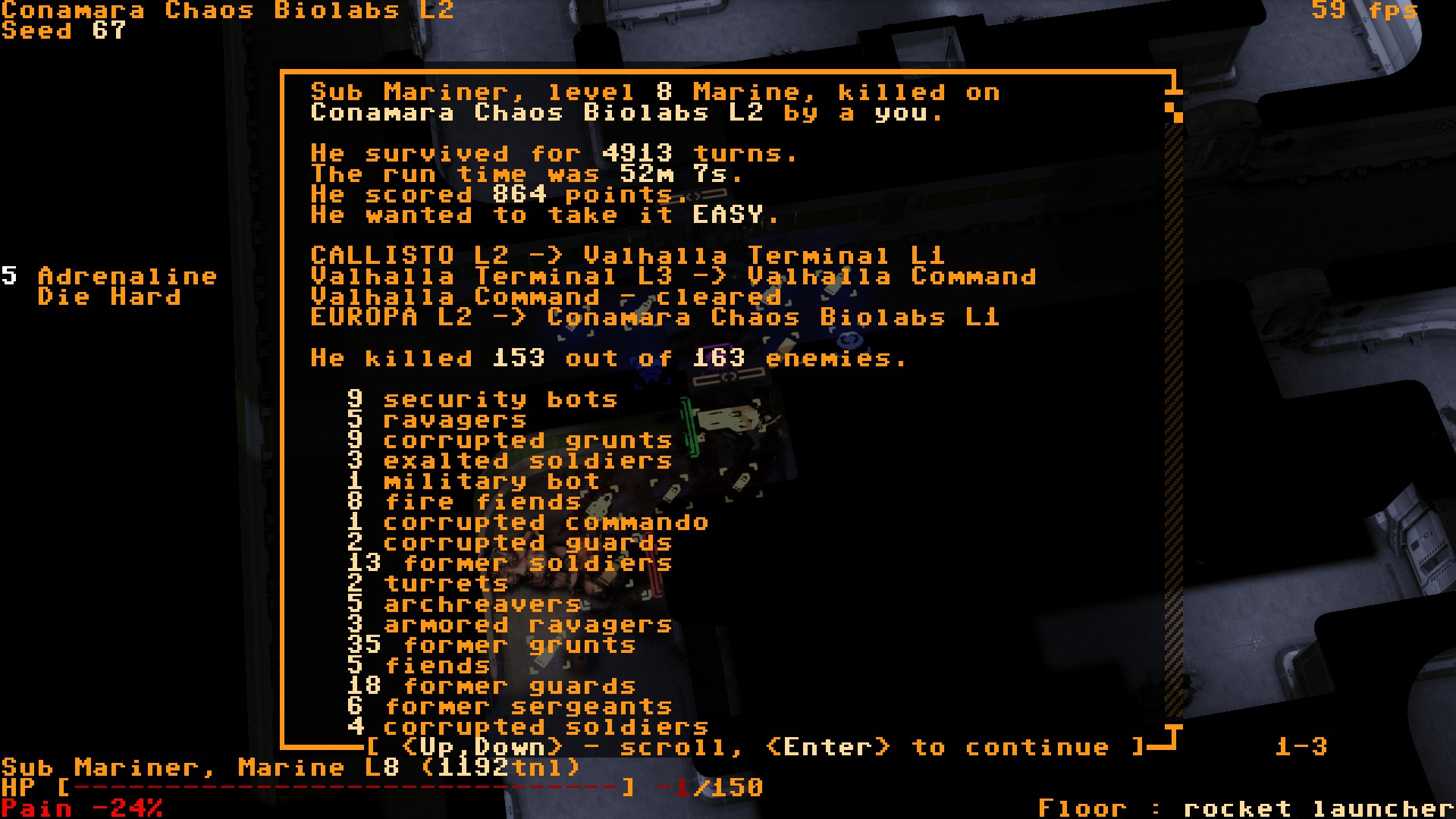 Jupiter Hell looks a lot like I imagine the recent Doom remake would if you took the first-person camera and made it third-person, fixed in an almost-top-down view. Well, at least on the relatively boring levels of the Doom remake; it had a lot more variation!

Graphics are fairly crisp — at least once you turn off the horrible CRT effect — and well animated. Dynamic lighting is nice and there are some nice little touches like shadows of spinning fans and flashing yellow beacons on some levels. The world tiles are nice enough, but again they need a lot more variation. 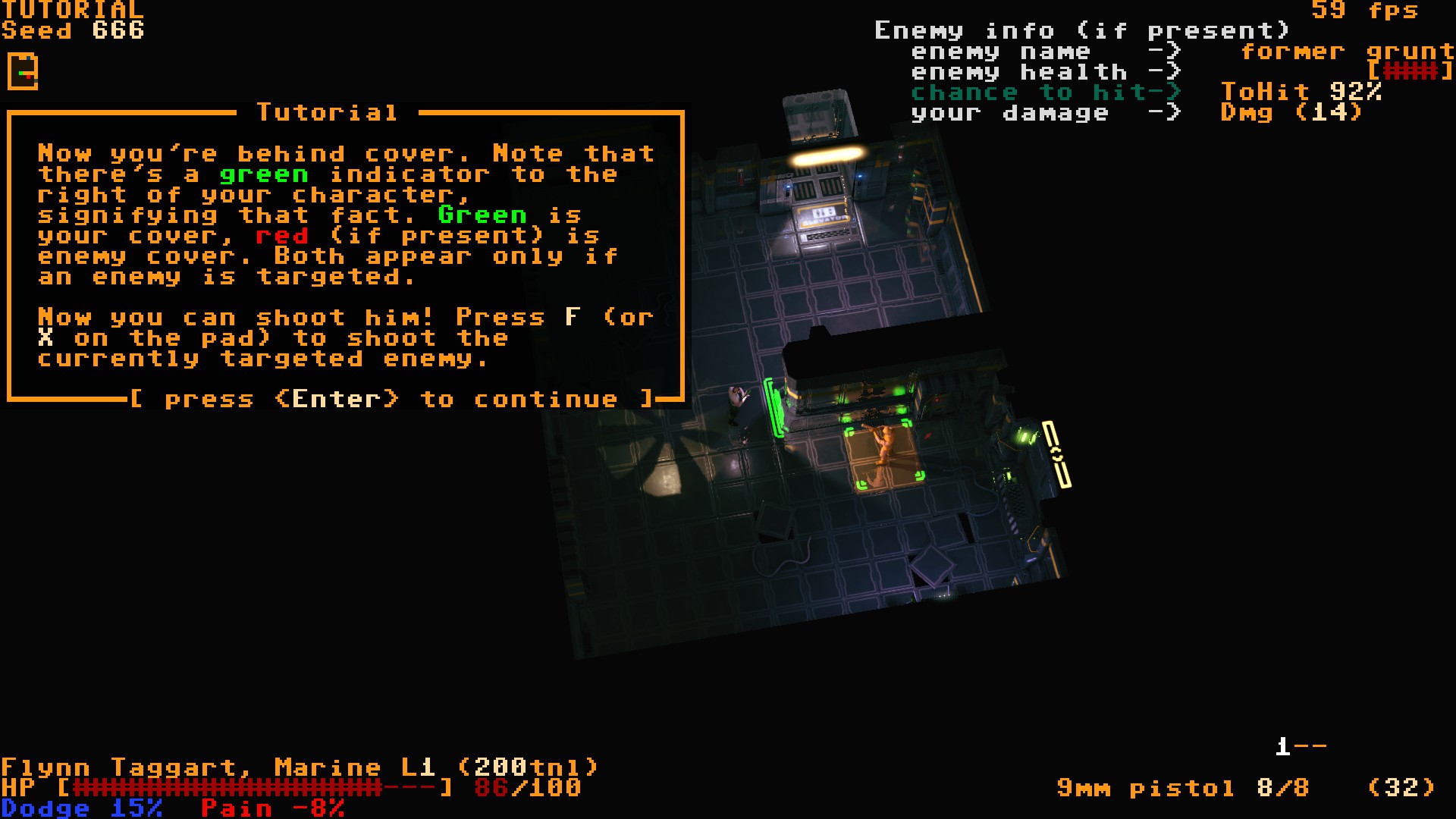 One big negative is that the camera position is fixed, and it’s not in a position that I like very much. With the game rendered in full 3D it makes no sense to not allow at least some freedom: at the very least pan and zoom, but rotate would be even better. Instead, the game is stuck in this view that’s zoomed in too close for strategic play, but not close enough to appreciate fancy graphics up close. This is made even worse by there being no overview map and no zoom available on the very rudimentary minimap; even on the small maps created by Jupiter Hell’s level generator, I still find myself backtracking on occasion, looking for things I’ve left behind.

The UI is very limited as well. I’ve already mentioned the lack of useful game-related information, but on top of that there are some basic quality of life features that are missing, too. For starters, there’s no way to execute a command multiple times, such as wait or move in a direction until something happens to interrupt the action, such as hitting a wall or an enemy appearing. Angband had this feature 20 years ago; the lack of it in Jupiter Hell frustrates me no end and has caused my characters to die numerous times from charging in to a room before noticing it’s occupied.

There’s also no way to look at anything from a distance. Want to see what that object is on the ground over there? Tough, you’ll have to walk to it. The UI will then tell you its basic name, but to know anything more about it you’ll have to pick it up, which will probably require you to drop something else first, since the inventory size is so limited. Oh it’s a weapon? You want to then compare it with what you already have? Tough luck! You’ll need to go to the equipment pane (ProTip: press ‘e’; this isn’t covered in the tutorial) and move the cursor around between your weapons, manually comparing the few attributes that are displayed.

Similarly, you can’t examine enemies or world objects, or … well, anything that you can’t pick up. It’s all very rudimentary.

Controls are otherwise okay, but bear in mind that there’s no mouse control in the game at all: keyboard or controller only. The interface looks quite nice, too, and the grammar is mostly very good, which seems to be an exception to most indie games these days. The game does pause for a second or so on occasion, presumably while loading some resource or other — it seems to happen most often when opening chests containing item types that haven’t been encountered before. So far this has only killed me once.

Sound is … variable. The touted Heavy Metal music is absolutely awful and I’ve had to turn music volume down to zero because I hate it so much. This is a shame because the other music tracks I’ve heard are actually quite pleasant. Sound effects are fine and fit the game well, and the quality of the character voice is fine, too, if not the content. I’d advise turning the profanity setting down; on “normal” the game is filled with over-the-top and not-at-all-amusing gratuitous swearing: “my inventory is fucking full” and that sort of thing. I don’t mind swearing when there’s a point, but this seems to just be done for shock value. *sigh* 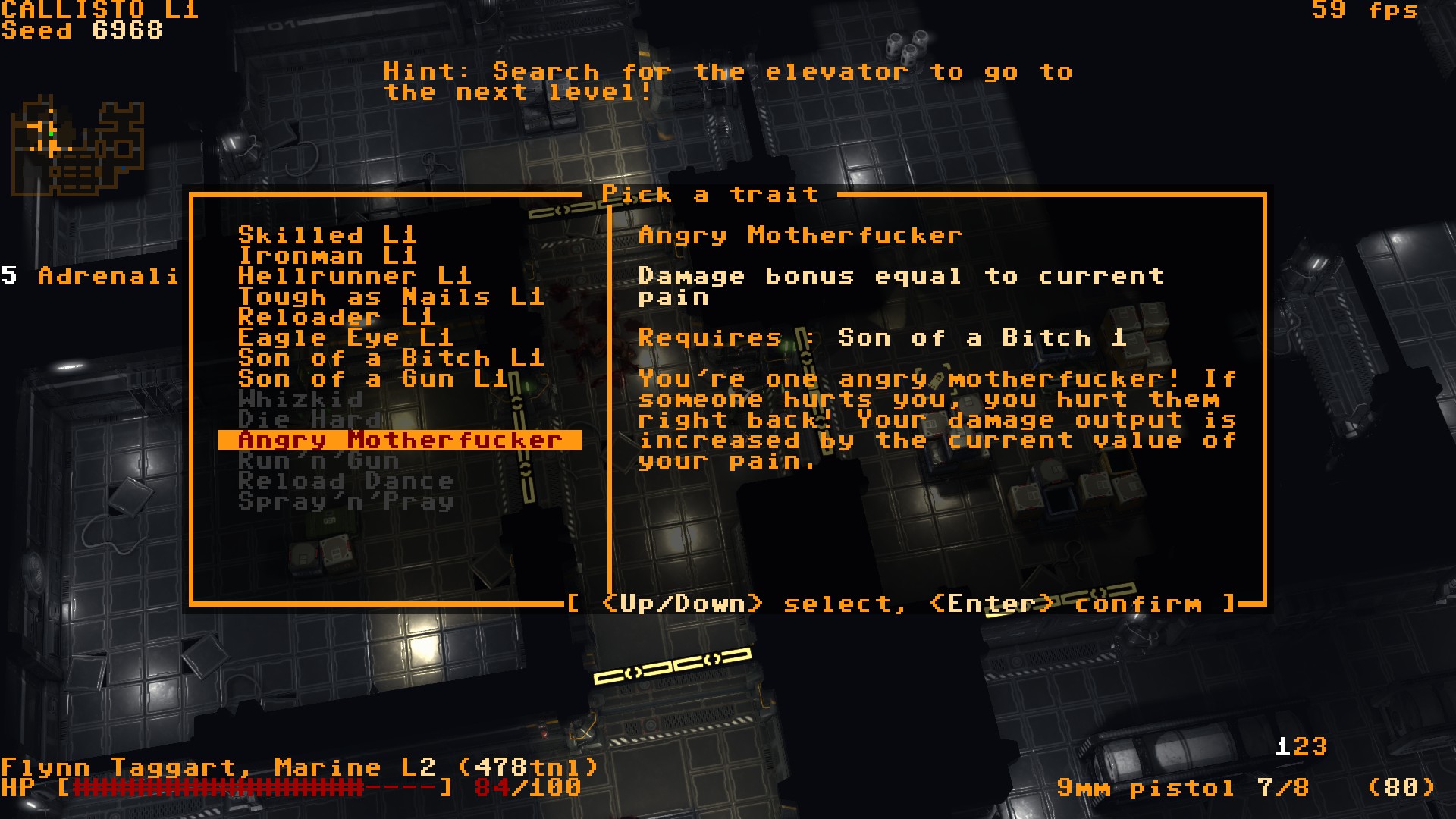 Jupiter Hell is basically top-down turn-based Doom. It tries to replace Doom’s fast action with Rogue-like elements — permadeath, procedural generation, and turn-based tactical decisions — but it falls flat. There’s simply not enough variation in any aspect of the game to make replaying it over and over again — the key to any Rogue-like game’s success — entertaining. It’s lost most of what makes an action game fun, but also doesn’t have enough of what makes a traditional Rogue-like game fun.

If it were a $5-$10 game, I’d suggest giving it a go anyway. But the asking price is way too much for what’s here now, and according to the Early Access description on the store page, it’s planned to increase even further during Early Access. There’s simply not enough here at the moment to keep me interested enough to keep playing it.