The best first-person puzzler since Portal.

More than meets the eyes

Don’t be like me, don’t get fooled by the screenshots into thinking that Supraland is a colorful RPG for kids. Yes, the stickman style for the characters is actually tied to a child’s imagination, but that’s only because it is the setting of this sandbox puzzle platformer. Think of Zelda meets Portal, and now you have a better idea of what this game plays like.

Truth is, besides Portal and Zelda, the closest game I could think of that relates to Supraland is Alwa’s Awakening. Both let you conjure a simple box, both provide a seamless world in which you grow your powers to learn new puzzle platforming tricks, and in both cases, it allows you to revisit previous areas to open up new routes and discover new secrets in a pure Metroidvania style. Most importantly, both showcase an incredible level design. 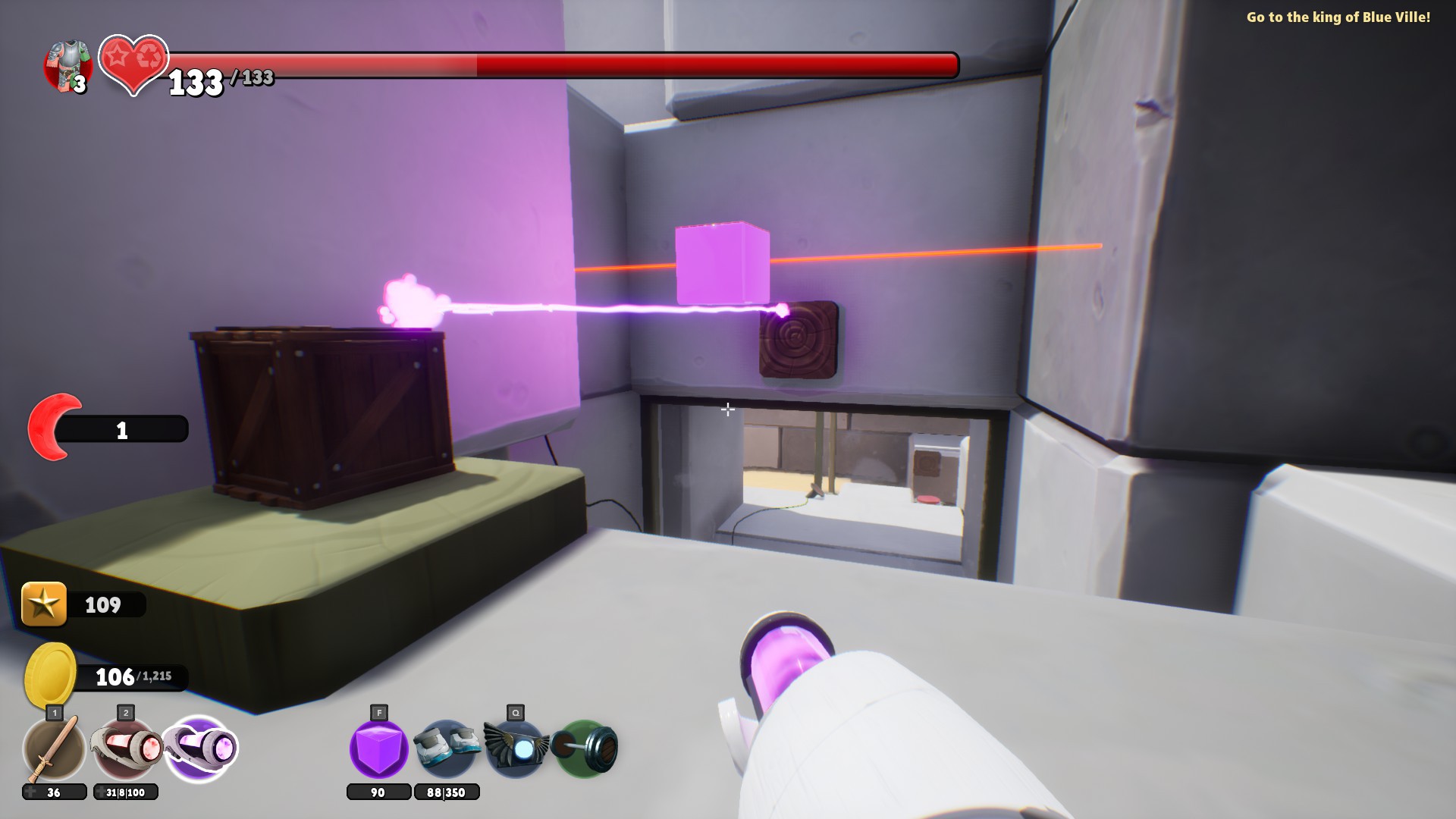 Supraland starts simple: there is a small village, and you receive a quest that prompts you to leave the red people village in search of the blue people village. And yet, the village is already so full of secrets and things to interact with that I was keen on exploring every nook and cranny of this impressive playground rather than setting a foot outside. There are even weird contraptions that change the color of items and sponges that soak up any liquid and can then be squished in a machine to expunge their content. There were also a few intriguing areas that I could not access that hinted that I could revisit them once I acquired new tools and powers. Once I was satisfied, I set forth with my sword and went on to explore the rest of the world. 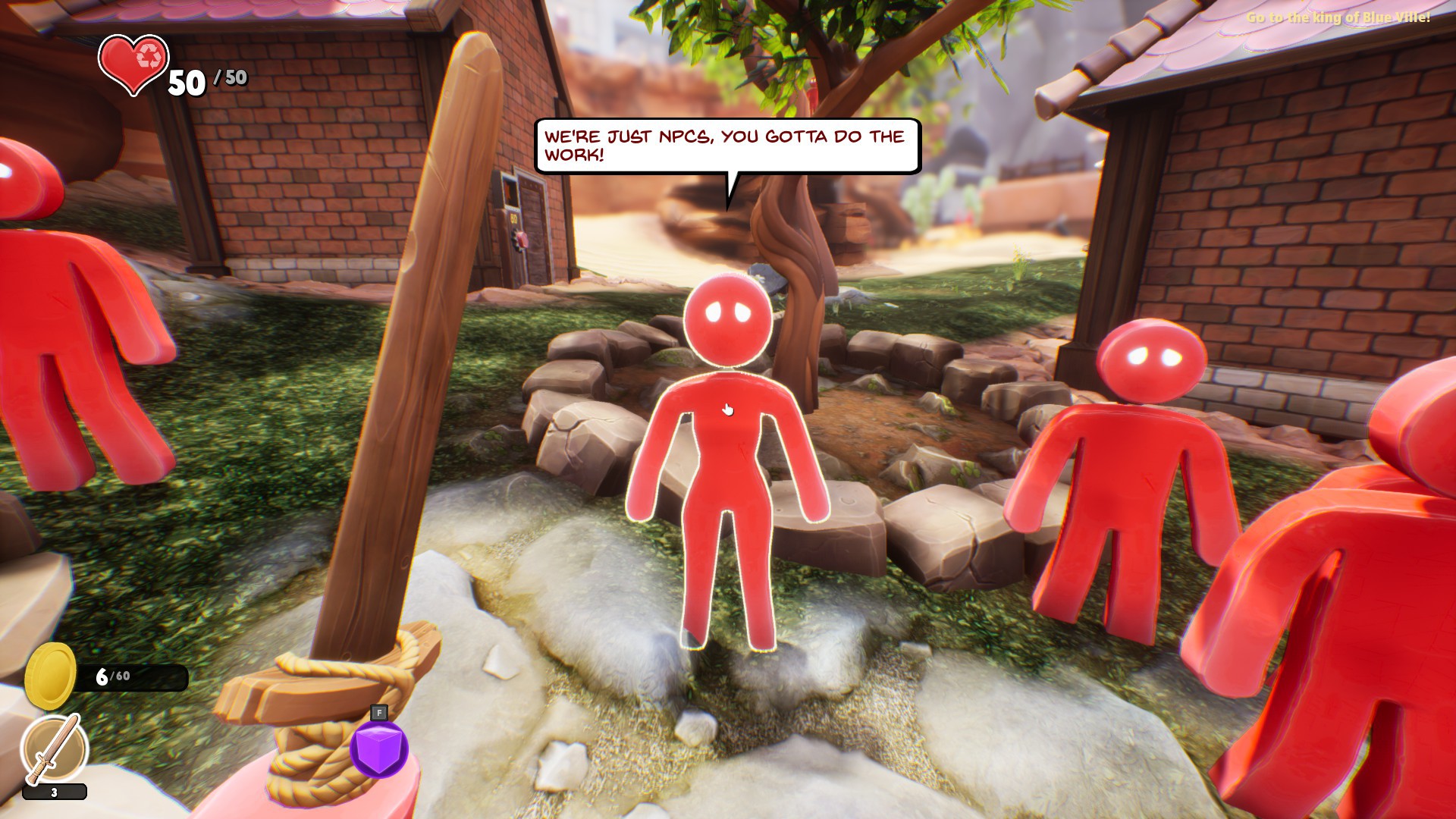 The next area (some sort of canyon) required me to learn new tricks, from a triple jump to conjuring a cube for platforming and solving puzzles by dropping the magic box on pressure plates, sometimes triggering catapults, jump pads and other fun activities based on physics. Every time that I experimented and managed to leave the main path, I stumbled upon treasure chests that rewarded my boldness and wits. This game is an explorer’s dream, as there are secrets galore: from hidden entrances in the walls to using the tools provided in a creative way, there is always something to reward the player. 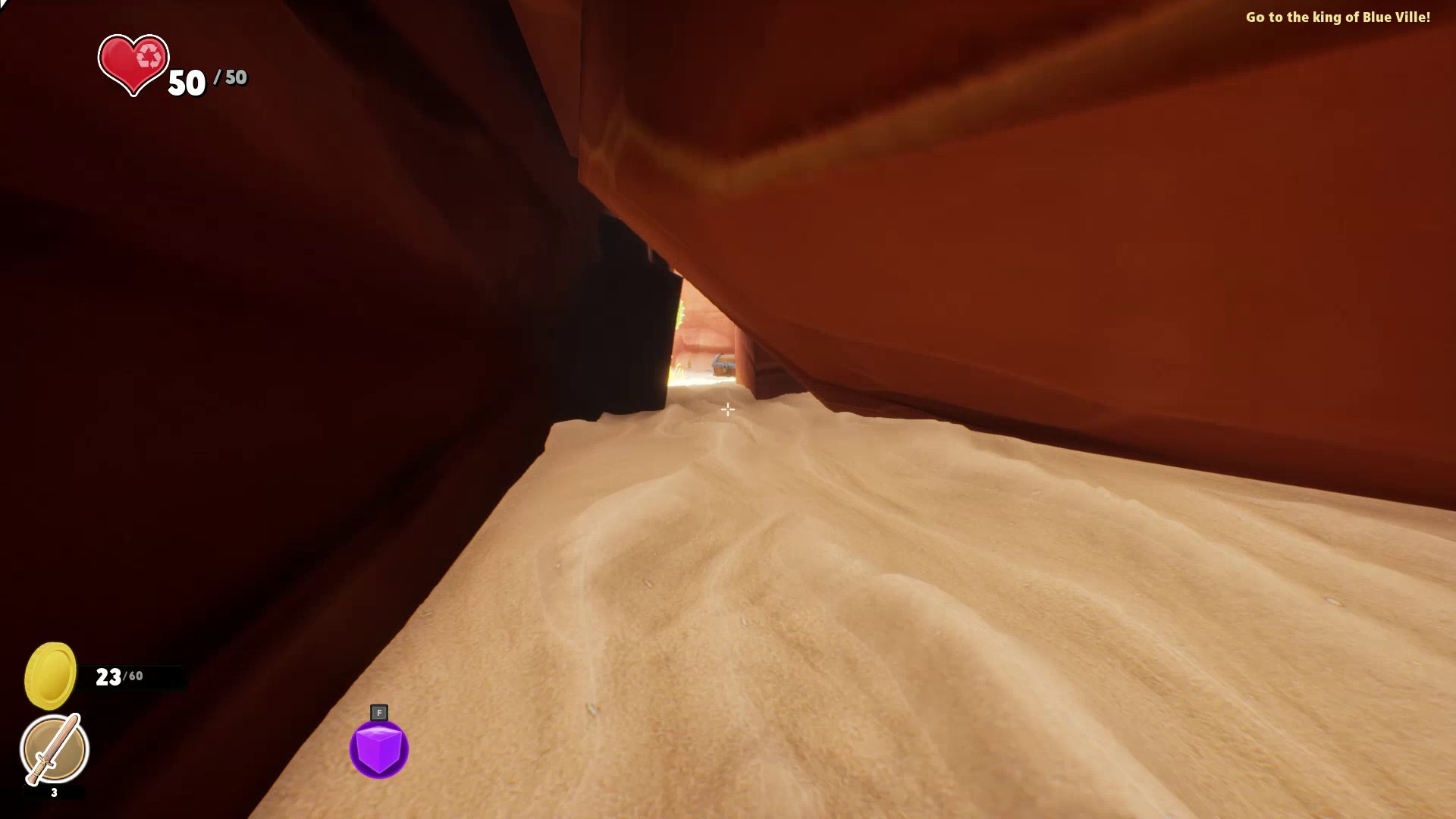 The world itself is a kid’s sandbox, with the kid looming over his creation in the distance. What’s more striking is that everything that you see can be reached without a single loading screen. Do you see a gigantic crystal over the mountains? That might be the destination of your next quest. Do you see a tap above your head, far from your reach and you think that it’s just background? Later on, you might find items that let you climb that high. All these huge thingies in the distance also serve as location landmarks to help you find your way. While as a whole this might be considered an open world, in practice you explore a succession of closed-off areas and work on opening the door to the next location. While the level design is a marvel, two things bothered me occasionally: some areas are big without being tightly packed with things to do, I would have preferred to walk less; sometimes I was trying to find my way back to the starting village without realizing that the path had been blocked off (until I progressed further), and I eventually became lost while trying to remember how I got there in the first place and whether I missed a path. At least a map would have been most welcome, even if it were crude without any details. But don’t let this stop you, this was rare and tiny in comparison to how good the design of this whole world was. 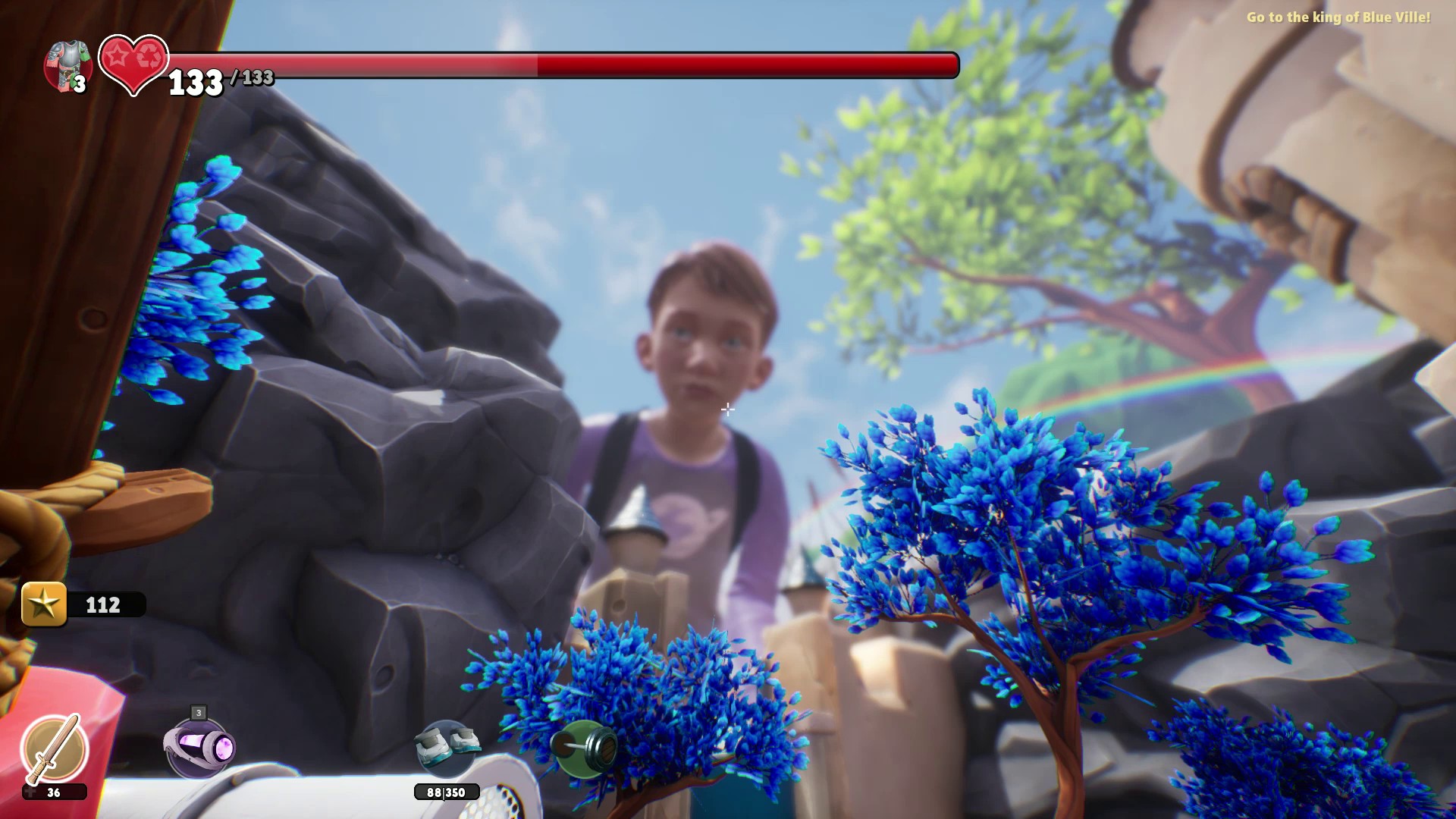 Each playground is rife with puzzles, and they are amazing. I would say that they are in the vein of Portal 2, letting you experiment with a bunch of possibilities until you figure out a solution organically. There are puzzles based on box placement, colors, electricity and so on, and the game manages to constantly renew the experience while forcing you to remember the knowledge you acquired in solving earlier puzzles. Sometimes you stumble upon a large area with absolutely no idea how to solve anything, and then as you experiment here and there it connects in your mind, you start to see the big picture and you feel amazing for solving it. There are also many moments that require you to think out of the box and realize that some random item or decoration actually has the property that you were looking for, and you use it to solve the puzzle. Mind-blowing. I will just warn you that there is a lot of platforming involved as well (including a grappling hook later on), and if you are not skilled with moving around in first person games, this game will be fiendishly difficult for you: both the puzzles and the platforming are not easy, although Supraland is good at gradually showing you what to do. There are also some characters occasionally giving you hints. Since it doesn’t bog itself down with realism, the world is arbitrarily built like a video game and it works perfectly. 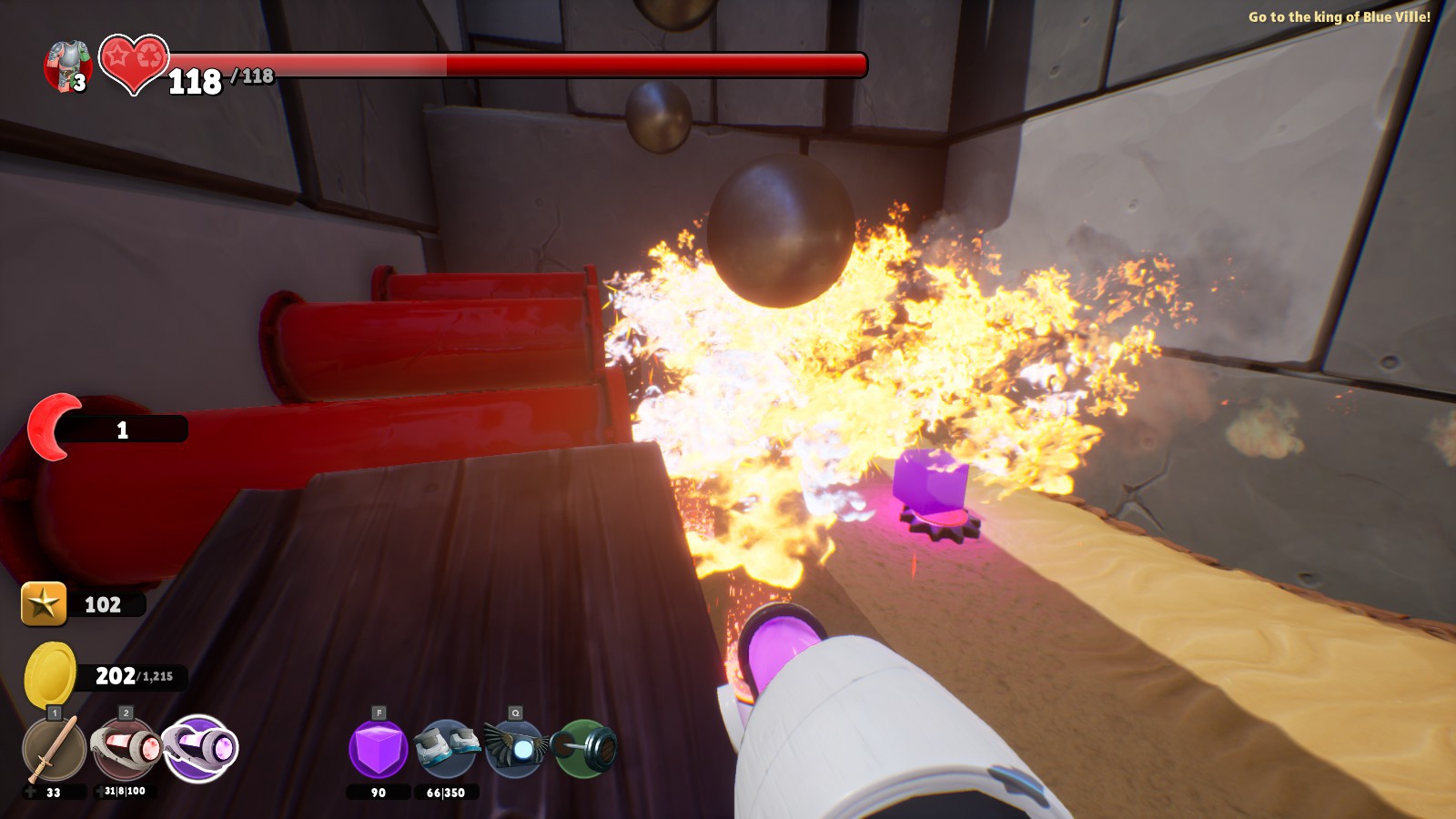 Supraland started a little bit like Zelda, grabbing a sword and going on an adventure while helping out the locals. The dialogs are often witty and funny, but the story itself is very basic and it simply points you in an arbitrary direction. I wasn’t bothered by this as the gameplay was its own reward, but it will prevent the game from shining as much as it deserves and reaching the mainstream audience. What surprised me also was the length of the game. After a few hours, feeling that I had already extracted plenty enough enjoyment from the game, I looked at the completion rate: only 20%! I was happy that there was so much more waiting for me to discover. Even while not playing this game, my mind was thinking about the places I could visit, the puzzles that I might have missed. Depending on whether you breeze through or take your time exploring, it can take 12-25 hours to complete. 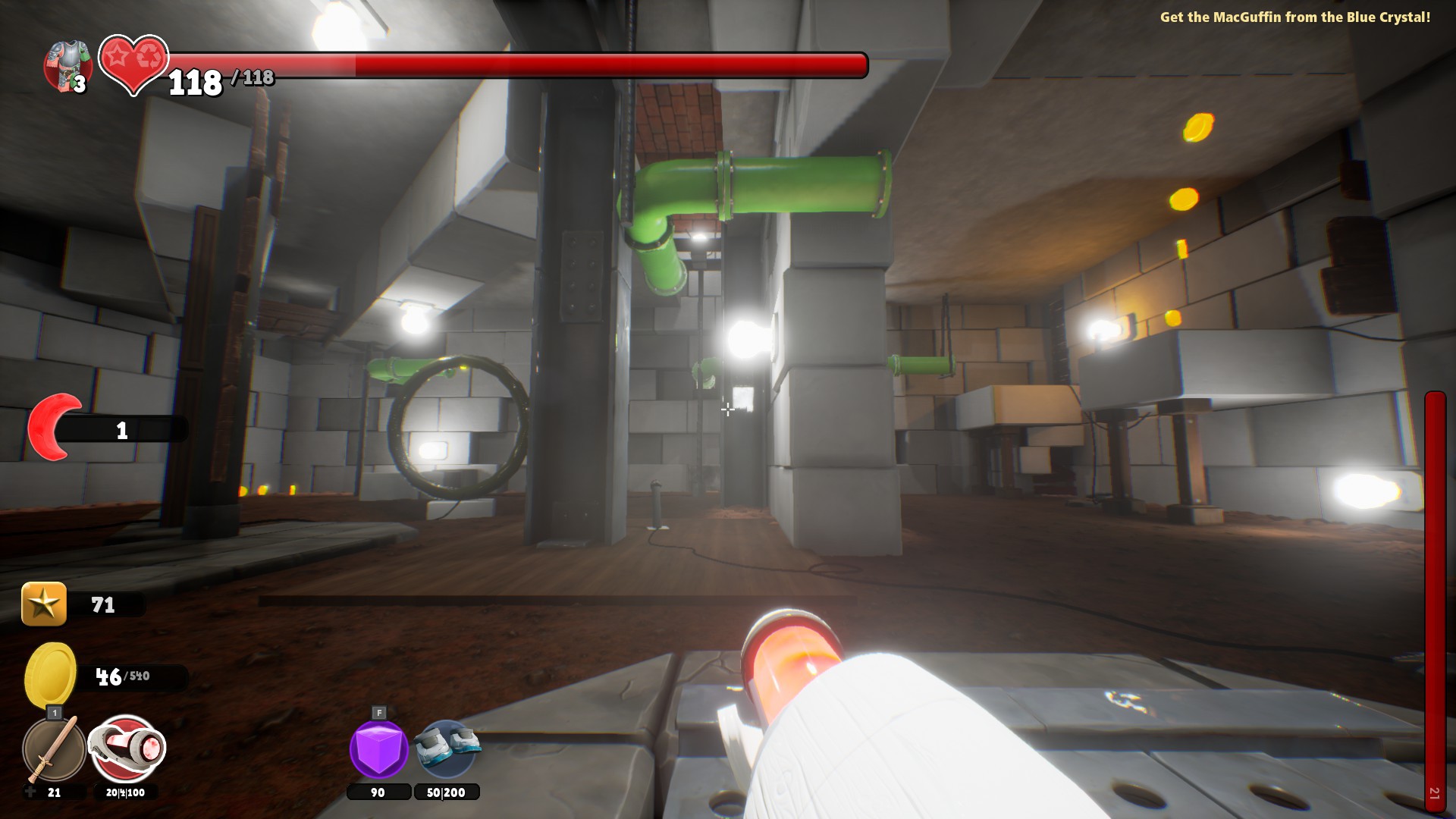 That little wooden sword that you obtain during your first steps in the game gradually becomes more powerful as you find all these powerups in chests, but fighting is not the game’s strength. Each location can spawn cute little skeletons and lava golems that beeline for you, and you hit them repeatedly with your sword. Or you use your cube to creatively smash them. Later, there are more fun methods to dispatch them, such as telefragging them with your magic cube or using energy guns. Surprisingly, the game then encourages you to combo an explosion by sending a slow projectile with your primary fire and setting it ablaze with your hitscan alt fire: it’s a bit like the shock rifle in Unreal Tournament, albeit faster but weaker. While it’s nothing to cry home about, it keeps you on your toes and adds variety to the experience. 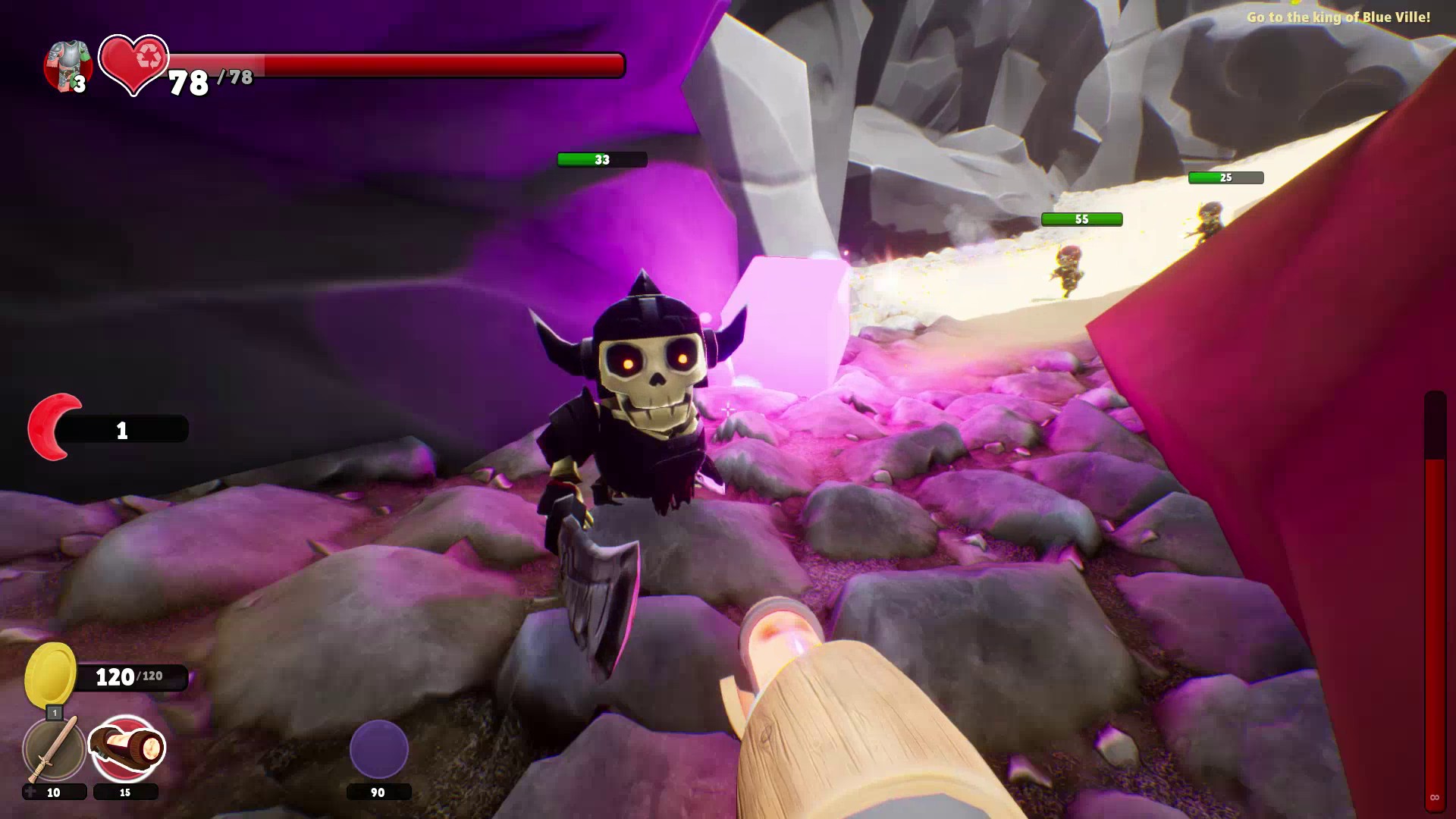 Supraland runs ok, but I had to lower the settings a lot to avoid framerate drops. It’s made on the Unreal Engine 4, which is very demanding. While the sounds are on point to let you know when something is going on, the music is not very interesting and sometimes distractingly stops in the middle of a track. You might want to see whether you like the game more with or without depth of field, as it blurs what’s in the distance: either you like this effect that makes you feel like a toy, or you prefer to see the world with a better definition. There are many details that show that the game was made to be a smooth experience, from simply not getting stuck behind rocks to items you carry becoming transparent so that they don’t block your view. 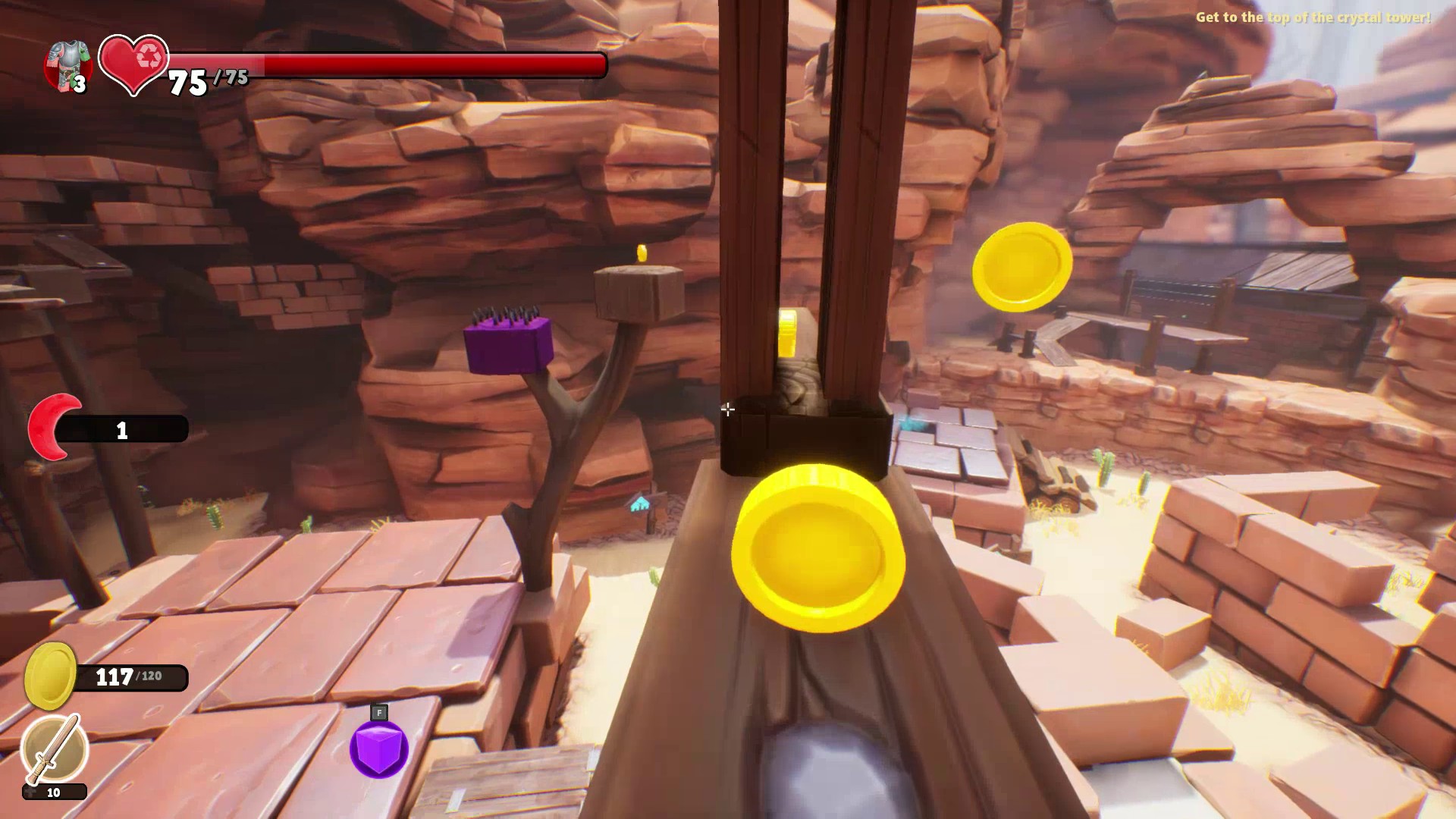 How can this be?

What’s crazy about this game is that it was mostly made by one person, David Münnich. He is clearly very talented, and Supraland feels too enormous and packed with content to have been made by one man only! This is an impressive labor of love. 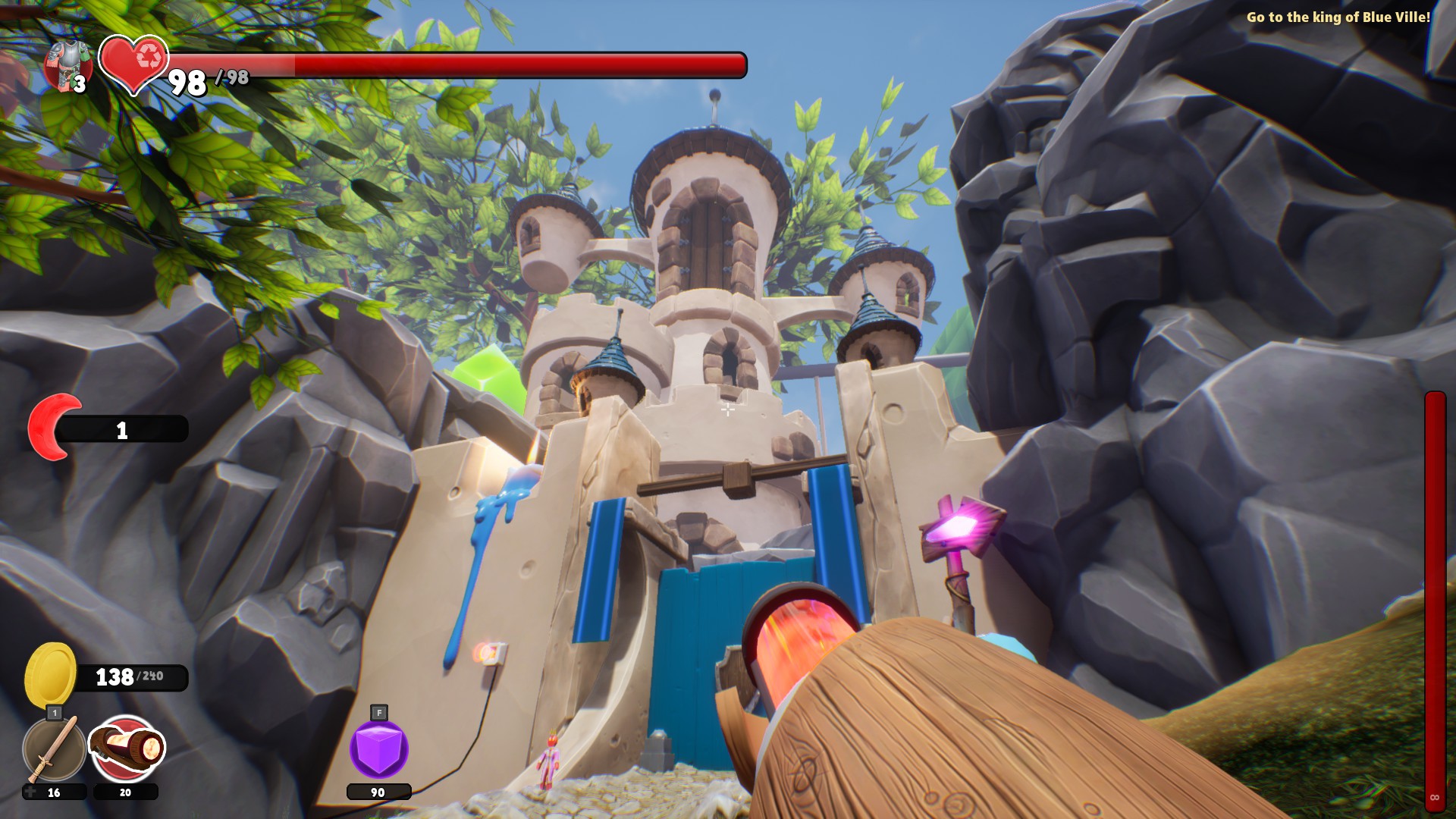 I’m afraid that the lack of a compelling story and a more striking character design won’t get Supraland on most people’s radar, but it would be a shame to miss such an incredible gem. Rarely have I felt so consistently enchanted by exploration and discovery, as this world is masterfully designed and the puzzles are amazingly engaging: it’s an absolute pleasure to experiment and figure things out in Supraland. This game is a perfect blend of exploration, puzzling and platforming, with a little bit of shooting on top. Just keep in mind that all of these require skill, but the game guides you to progressively learn its mechanics. Hands down the best first-person puzzler since the Portal series, I strongly recommend this surprising title.