As a young kid, I watched a lot of Adult Swim. I also watched a decent amount of anime, though many of those memories are currently lost to time. Wolfstride draws inspiration and has references to pieces of media from my youth, and does its best to embody the passion and love present in each one. The main character design instantly screams ‘Spike’, a choice that’s charming rather than hokey. His name is Dominic Shade after all- and the game does a great job of setting him apart and writing in his purpose and everyone else’s outside of the inspiration sources. If giant robot fights aren’t your thing, this one might not be for you, even if it does have an interesting narrative to offer. 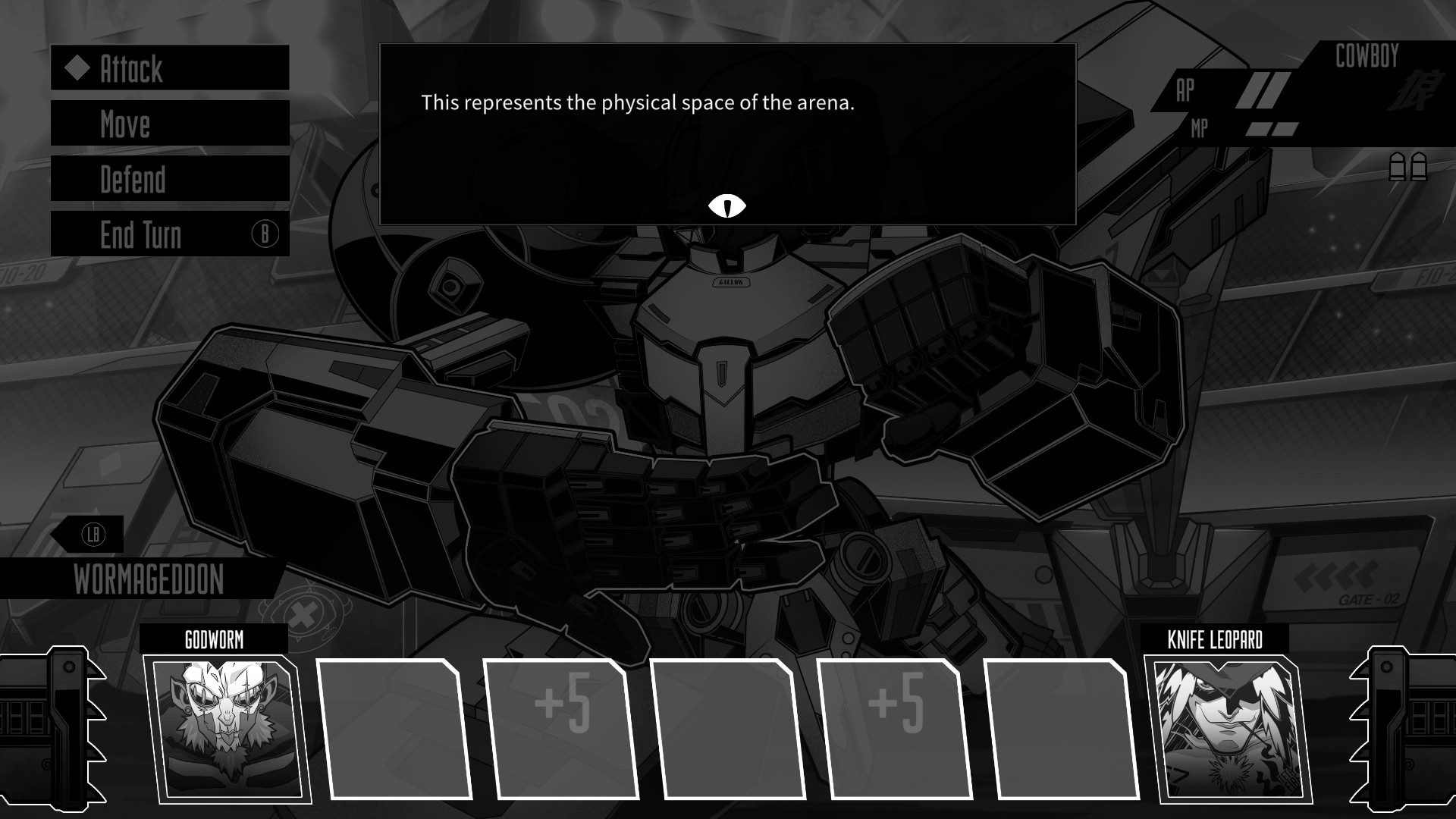 Mechs. If you don’t love them, then this game might not be for you. Or, rather, half of it might not be for you. While our main playable character is Dominic Shade, the intro starts out with an individual named Foam Gun. It seems they’re important, whoever they are, and prone to talking down to the individuals they’re communicating with. They’re in some sort of seat of power, and kick off the story with a declaration: frag-a-jam.

From there, we’re immediately introduced to two members of our trio, Duque (also known as Wizard and Killer) and Knife Leopard (also known as Pineapples and Hillbilly). The pair is prepping for an imminent fight, rolling out in seven minutes. Knife Leopard seems calm, almost too calm, and thanks chamomile for the contribution. Duque, meanwhile, seems frustrated and anxious- but that doesn’t stop time from progressing. No, the duo still has to do a mech fight with their third member, Shade, missing. 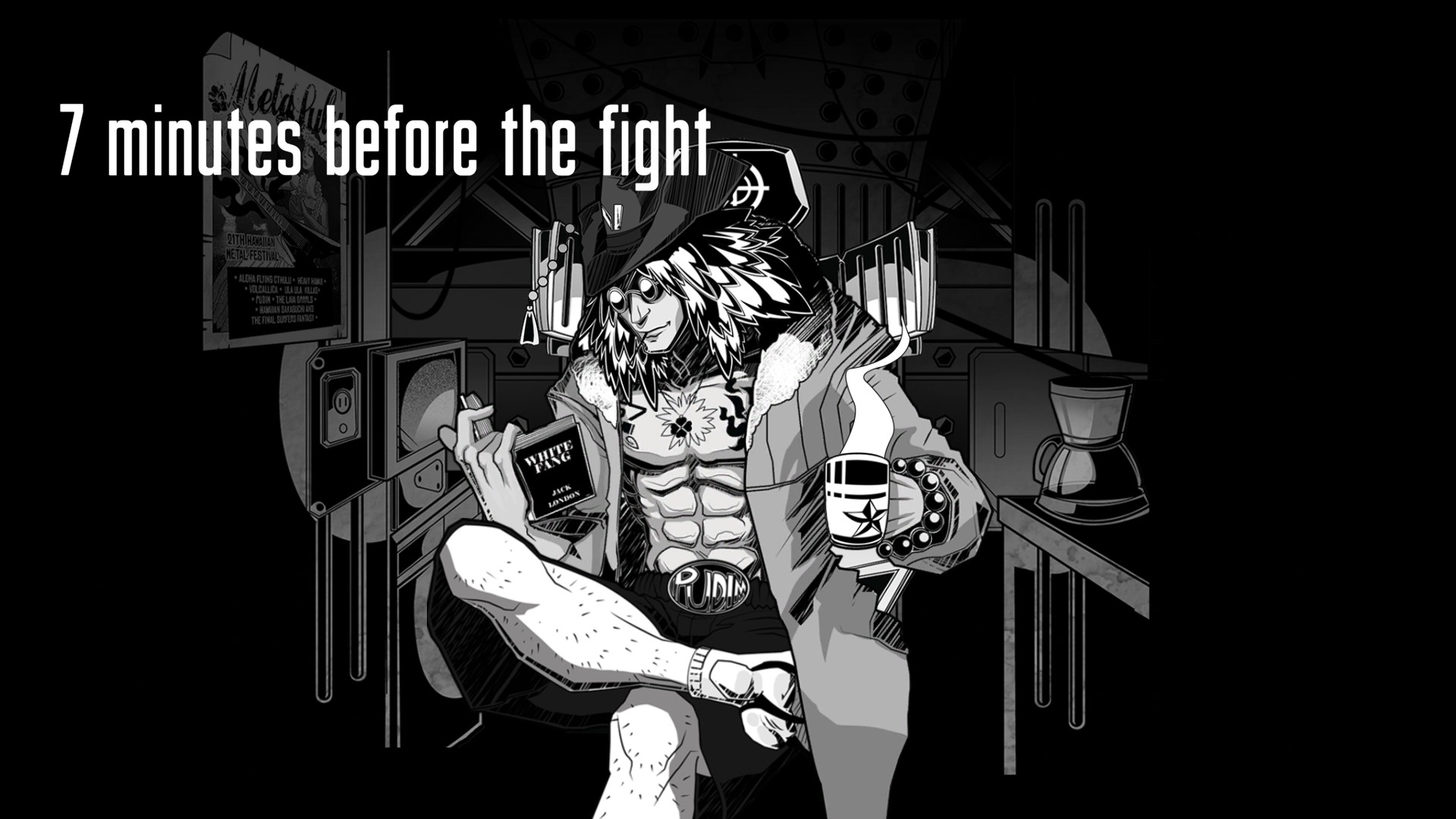 Of course, I don’t want to spoil the way that the fight goes, it doesn’t take too much brain strain to guess. We also get the start of our understanding of Dominic Shade, and just what he and the group might be dealing with. Bad choices were clearly made, and whether not they were made in dire straits doesn’t change the consequences. You’re dealing with the fallout of the past the entire way through Wolfstride, and things become clear the further you progress. The goal beyond an understanding of the characters is for the team to rise in the ranks worldwide mech championship and get some sweet, sweet cash. How that pans out is something I’ll leave to those that play it. Everyone loves an underdog though, right?

While the writing is juvenile, but it’s also oddly full of heart. Characters seem genuinely concerned for each other, even if most of them are incapable of expressing it delicately, or even kindly at all. The history between the main trio is immediately clear, and narrator text given on a black screen expanding on thoughts, and feelings set additional tones and moods. Sure, there’s a tendency in-script to lean towards vulgarity, but that’s how real life is, too. Most people I know toss around slang or swear words for colour and liveliness, and it’s not an unwelcome addition, in my opinion. 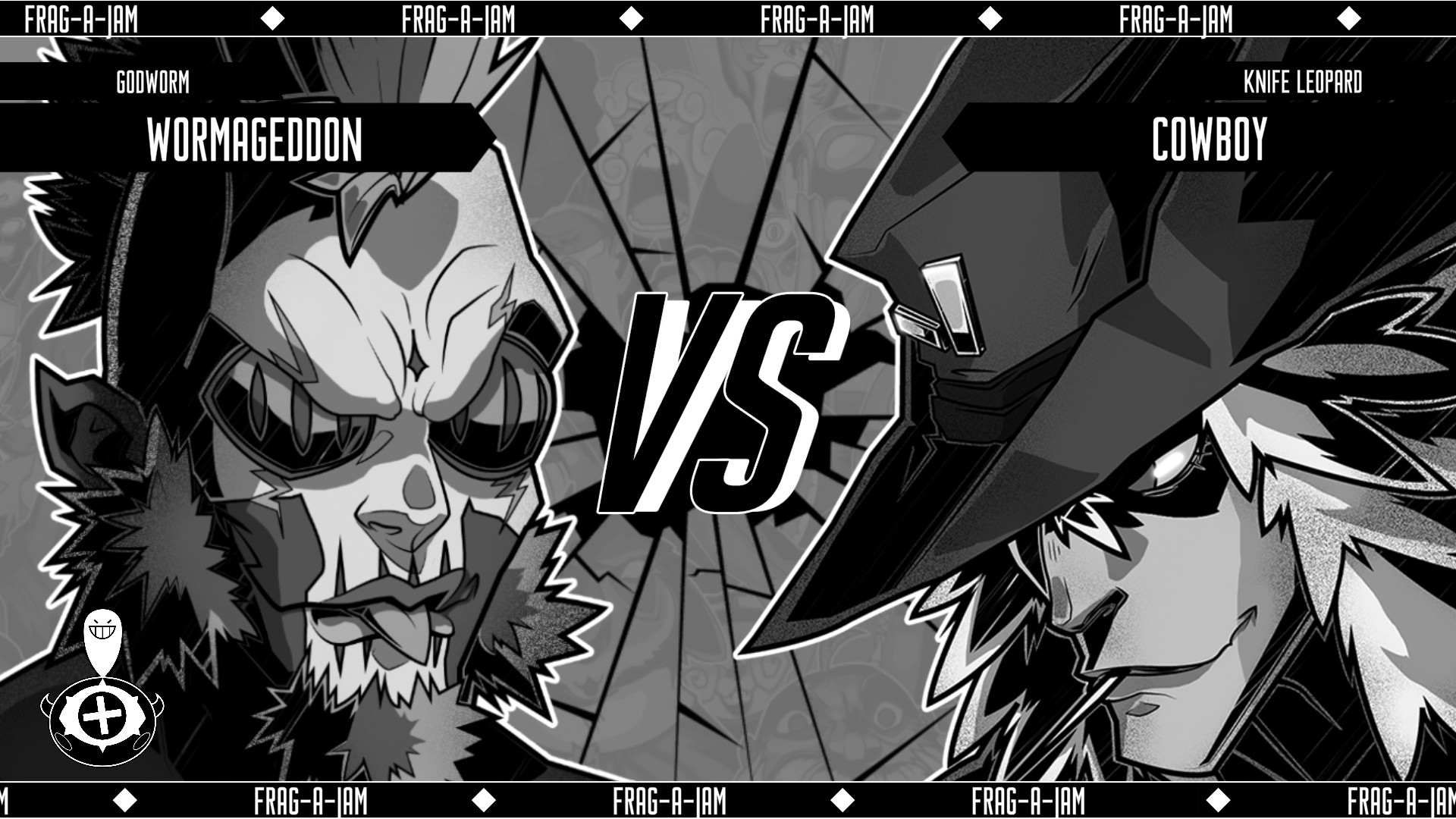 There are a lot of poop jokes, though. I suppose nothing’s perfect.

Perhaps the first thing you may notice about the game on its steam page is its monochromatic nature. It’s definitely what struck me first, and it makes everything amazingly stylish as the game progresses. The art in this game is phenomenal- so much so that when a message appeared the first time I hit the pause button on the controller, it made me laugh. “Every time you skip a cutscene an artist dies”. You’ve got the option to kill one more, or to say you missclicked- and it’s true! I had missclicked! Why would I miss the opportunity to see the cartoonlishly animated pixelated antics of Mister Shade at a piano before the barkeep hits him in the head? 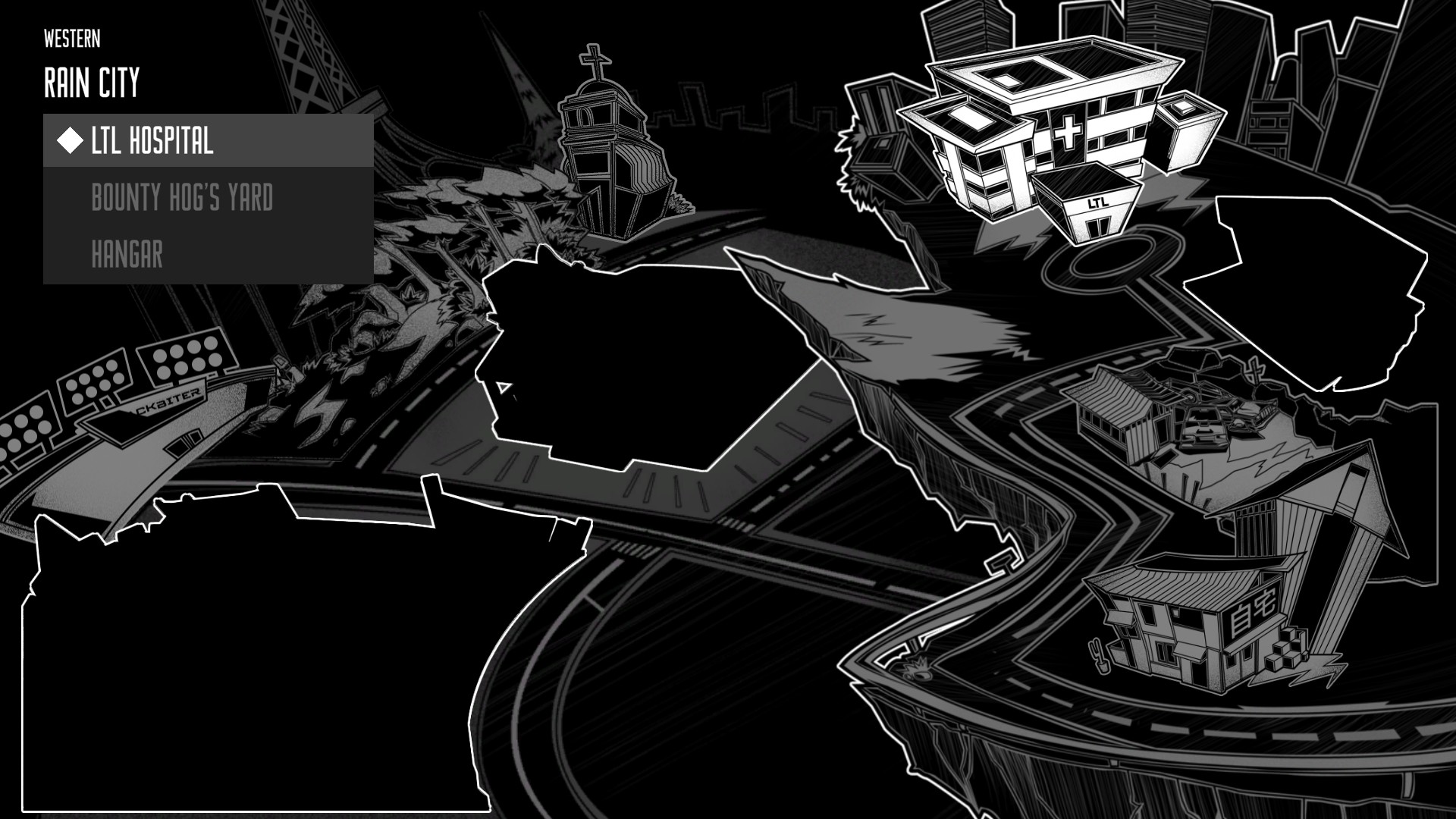 There are two distinct visual styles in the game. Like I mentioned before, there’s the pixelated aspect when Shade is running around the city, allowing him to freely move on his thin, twig legs. Backgrounds differ when you enter actual main areas on the map, like the Crapyard or the hangar, but the roads leading to these buildings are almost the exact same. This didn’t bother me, but I can understand the potential critique for reusing the assets available. 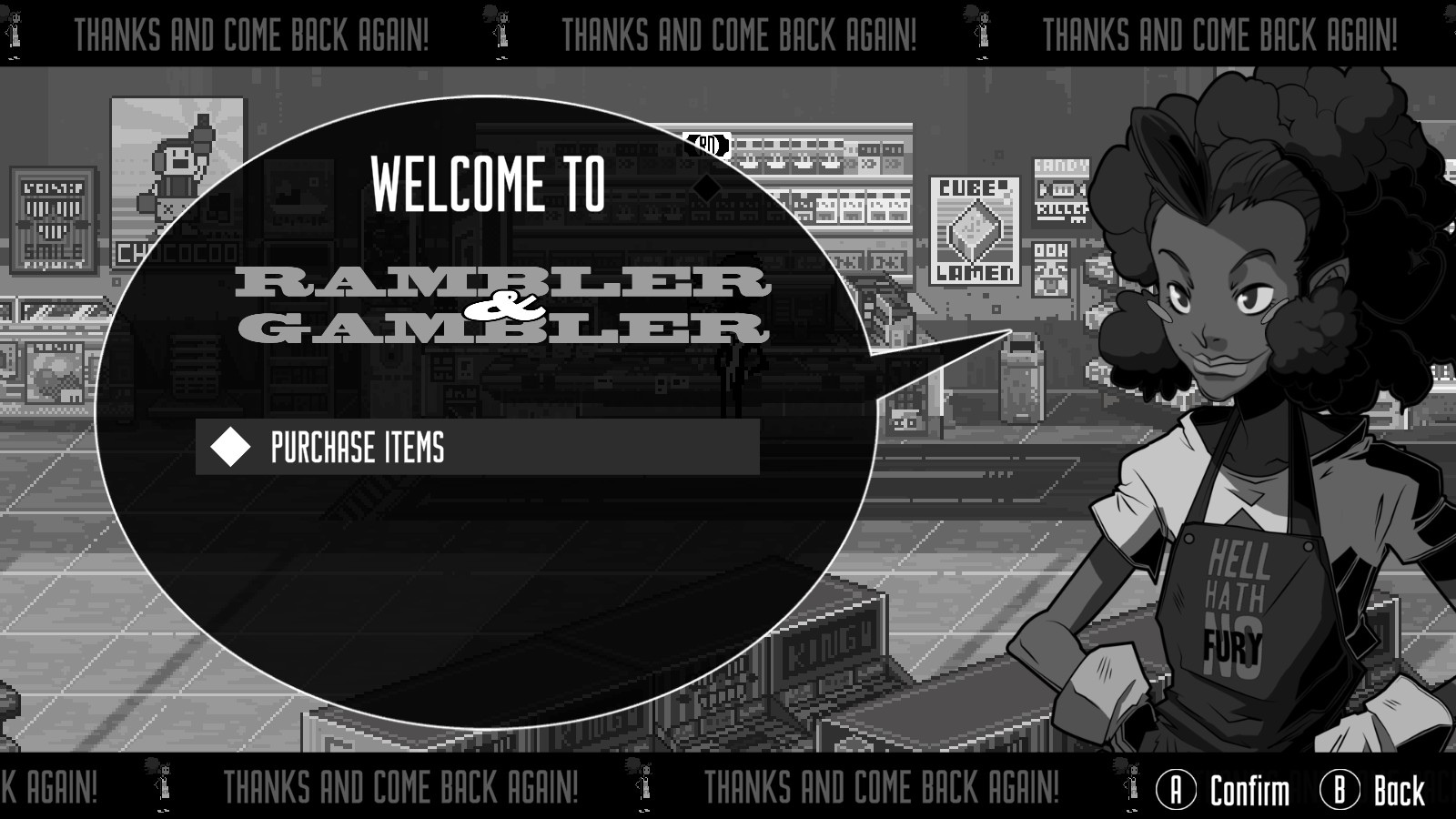 Wolfstride also employs talking heads, and the linework is phenomenal. Each character looks drastically different, and is full of spirit and set apart from the other models present. These illustrations are probably my favourite part of Wolfstride, and I found myself excited to meet new characters constantly, mainly to see the phenomenal art that would be present.

There are two distinct parts to the gameplay in Wolfstride-the mech battles, and the city interactions. Mech fights roll out in a turn based fashion, so if you’re looking for a more action-oriented brawler style game, this one might not be for you. Still, it’s a battle angle that’s implemented well. MP, AP, bullets, and health are all something to look out for during mech battles. There’s also a movement bar at the bottom of the screen, and positioning properly in the arena is a key part of the gameplay here. Certain squares grant +5 attack up, and it’s definitely important that your mech stands there rather than an enemies. If they do end up there, they can be pushed back, but it costs two MP to do so, and you only start out with two! AP is used to attack or perform actions, and we begin with two of those as well. Moves can utilize the bullet resource, which does need to be reloaded by defending once its empty. 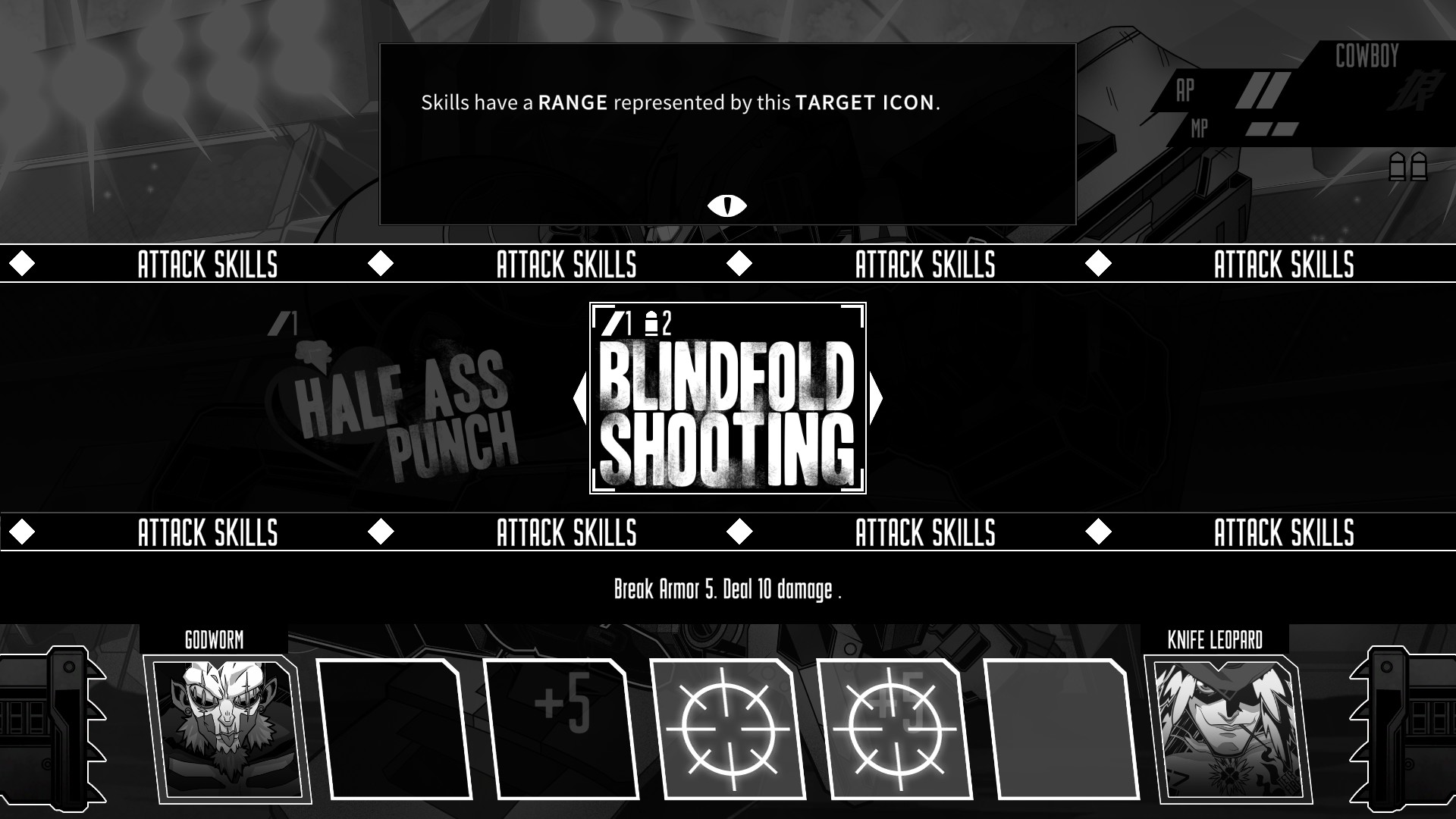 As more skills are learned, they can be equipped in the menu by selecting pilot, and then assigning them per slot. There are also healing skills, taunting skills, block skills- and even more ways to make sure you win your rock ’em sock ’ems. 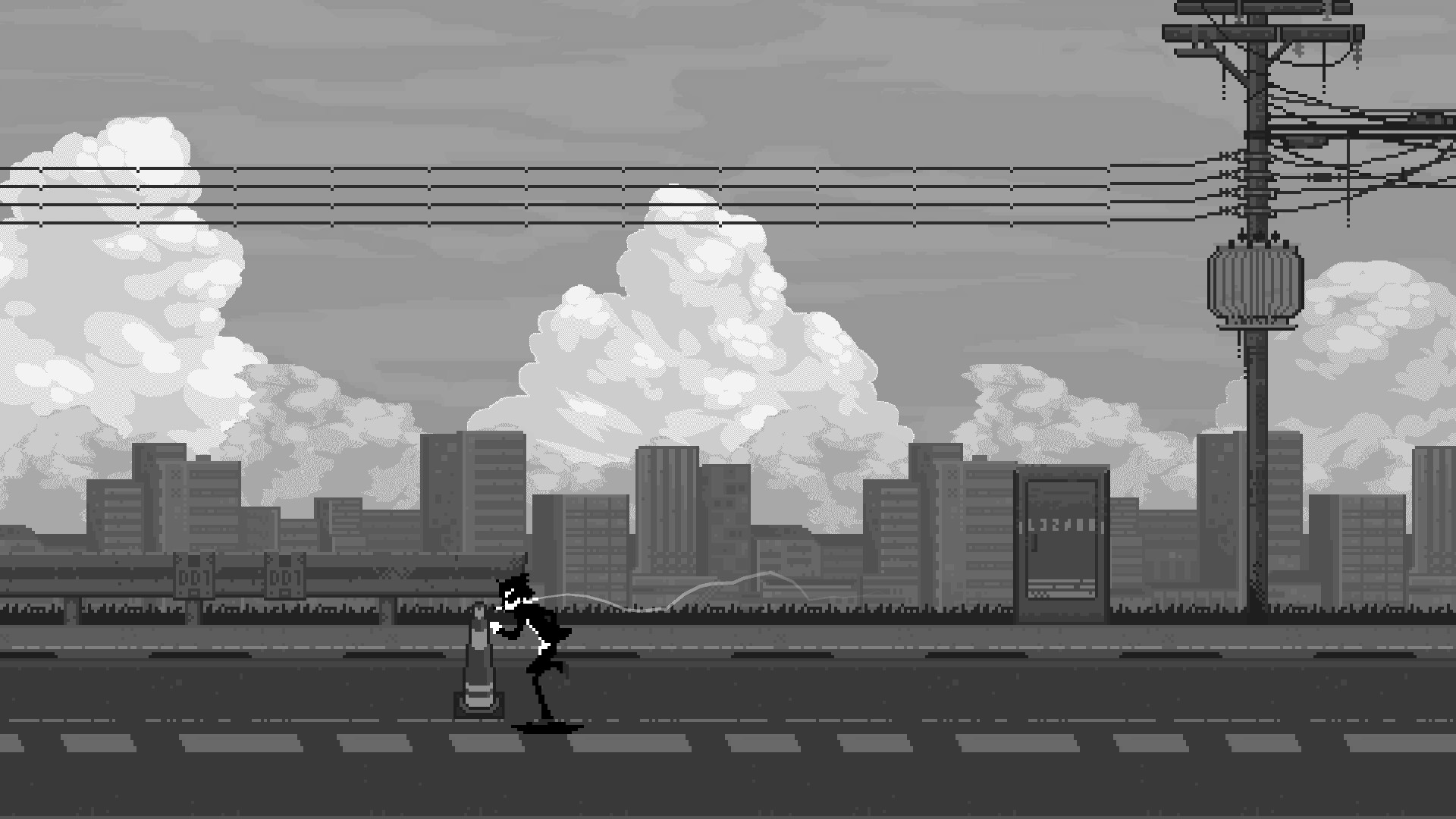 The other portion of gameplay involves running around and doing various tasks or earning money through odd jobs. Shade is the manager of the team, and thus gets saddled with the manager jobs…like picking up groceries at the store or delivering packages on bicycle for some quick cash. I found these parts charming, as running from place to place lets you talk to more people and learn more about the world. There’s also money hidden in certain places for you to find, which is a welcome treat when you’re dirt poor from fixing a giant robot. The package delivery mini-game is also fun, and genuinely became a bit challenging later on to try to beat the clock. I’m not good at it, I quickly discovered, but spamming it is a decently easy way to earn $60 in under 40 seconds. 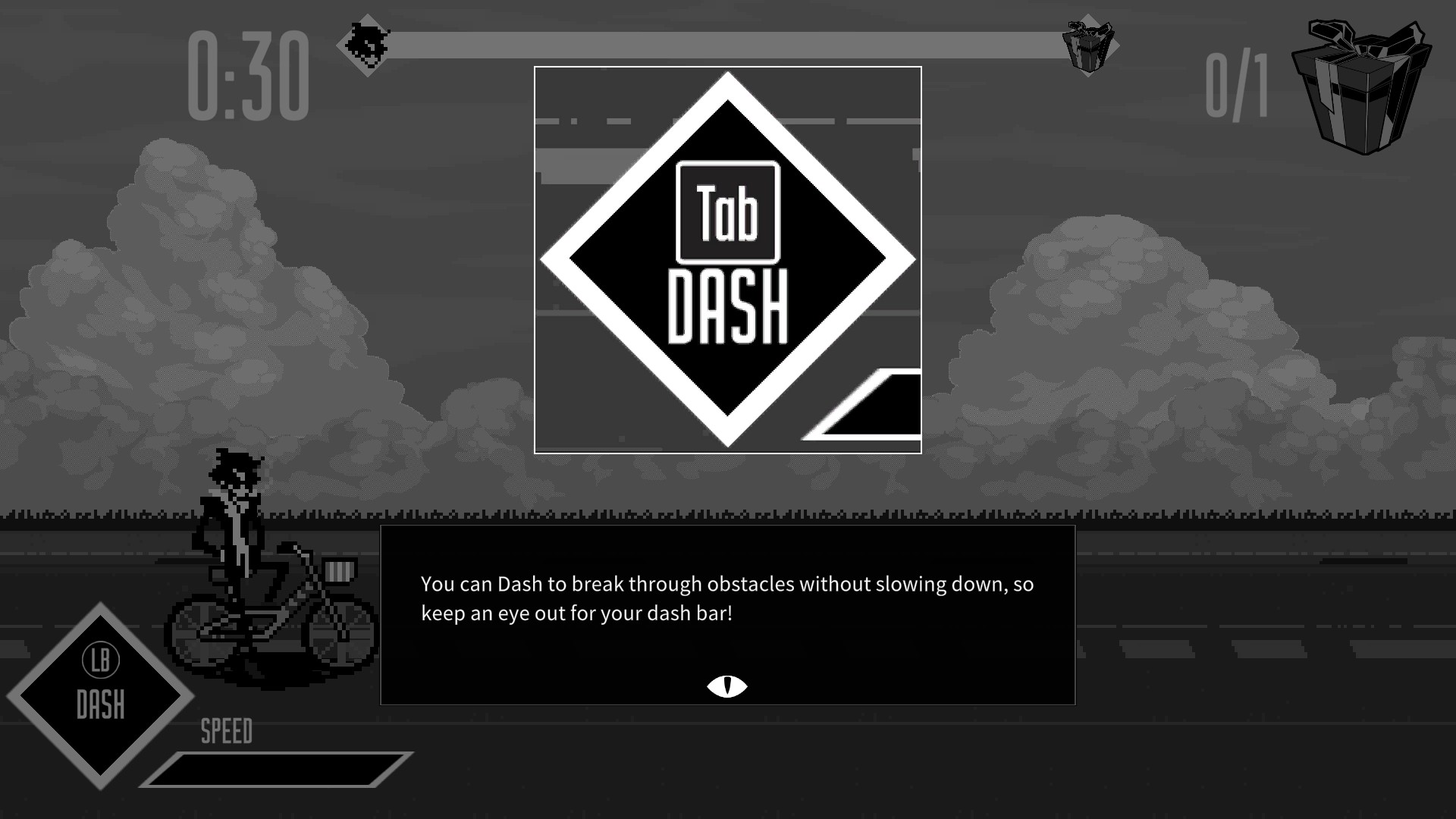 Wolfstride is charming, stylish, and genuinely fun. Characters are full of life and personality, and their designs often make me want to learn more about them before they even open their mouths. It’s easy to overlook the occasionally childish writing if you embrace the whole of the characters, and everything else on offer for the game itself. I recommend this one so long as you don’t mind turn-based battling, and traveling from map area to map area on fetch quests to experience an interesting story. Honestly, it’s easy to overlook pretty much everything for the amazing pixelated visuals Wolfstride has to offer, but it’s a bonus that I enjoyed almost every other part of the game as well.