PREVIEW: Out of Space

Tired of cooking with your friends, how about cleaning up a spaceship?

When I started playing Out of Space, it immediately made me think of a space janitor in the vein of Viscera Cleanup Detail but under the guise of an Overcooked-like party game. Indeed, it’s a party game for up to 4 local players, cooperating towards a common goal rather than trying to kill each other. Besides dirty aliens that try to stain the floor that you just cleaned, you will also have to deal with survival elements such as sleep and food.

Up to four players are hired as a team of space janitors to rid spaceships of an alien infestation. They are dropped with only a mop, a bucket, a few deployable necessities and access to a water fountain. Our first moments in the game were extremely confusing as we were trying to figure out how the game worked while being quickly overwhelmed by the alien infestation, which replicated in the dirt faster than we could mop them. Even worse, our characters would fall asleep right in the middle of the action. Some kind of safe tutorial to ease players into the game is desperately needed!

At some point, we managed to understand the ropes of the game, but we were too busy swallowing up pumpkin after pumpkin to lower our hunger bar, and we didn’t have time to worry about the infestation. Overwhelmed again, and Out of Fun… There are so many things that are wrong with this that I don’t know where to start! 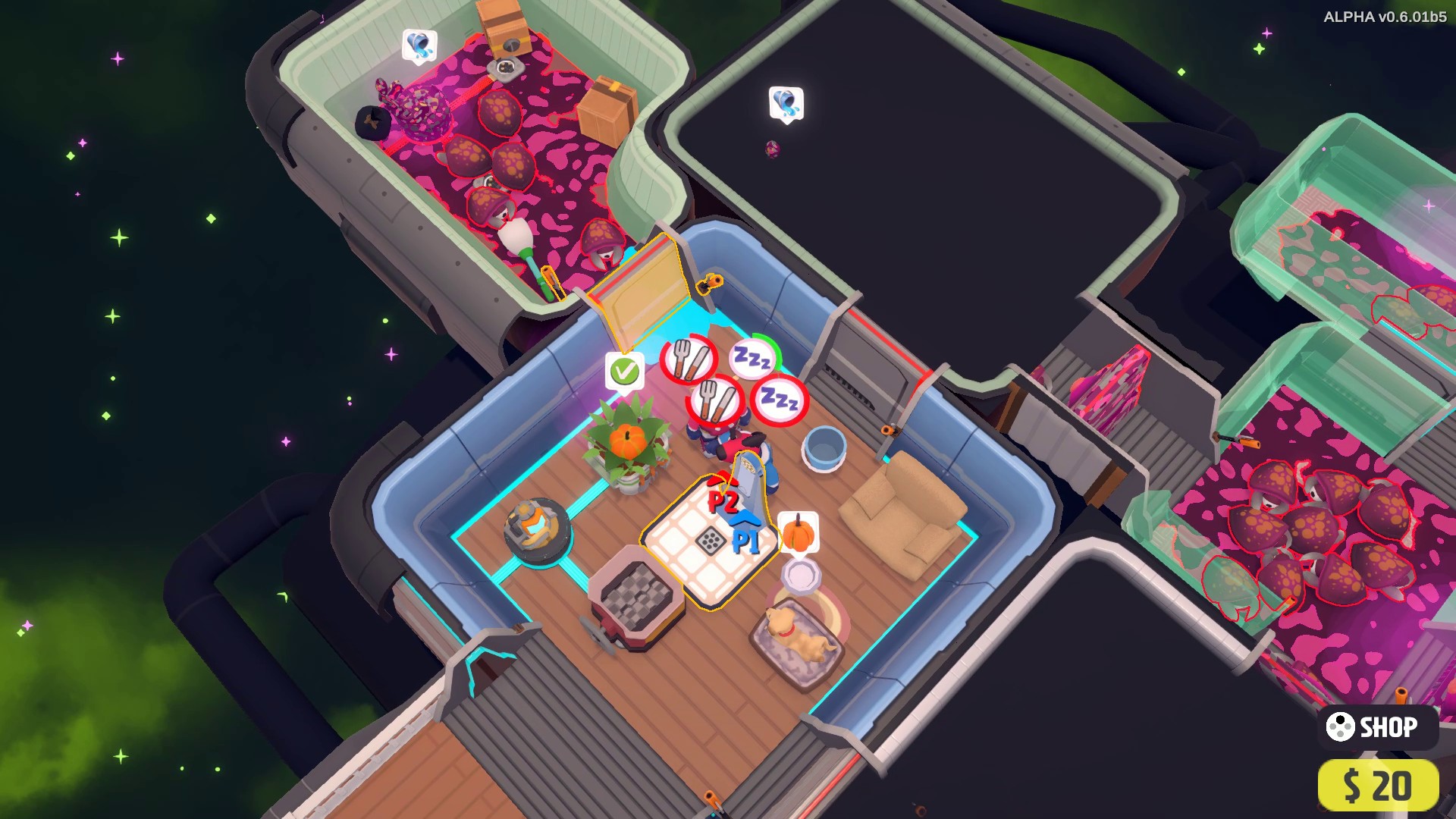 Something that I didn’t realize before launching the game is that it would be a survival game. I love party games, I hate survival games. The busywork of feeding a character is much too tedious for me, and I will never understand why video game characters require food every ten seconds. It turns out that the pumpkins can be cooked for a more nourishing meal, but I really felt that it should have been explained by the game before you begin playing. Regardless, it requires the players to buy an oven, which normally doesn’t happen right at the start. This creates a weird difficulty curve where starting the game is extremely difficult, but once you get a good start it actually becomes much easier. Shouldn’t the difficulty work the other way around? Most games start out easy but then as you progress the gameplay becomes more difficult, yet Out of Space is the exact opposite. I talked about food, but it’s the same with sleep: at first recovering stamina is very slow, but then later on you only spend two seconds in a comfortable bed and you’re done. Shortcuts that reduce the time spent on any specific activity highlight that this activity is not fun in the first place. 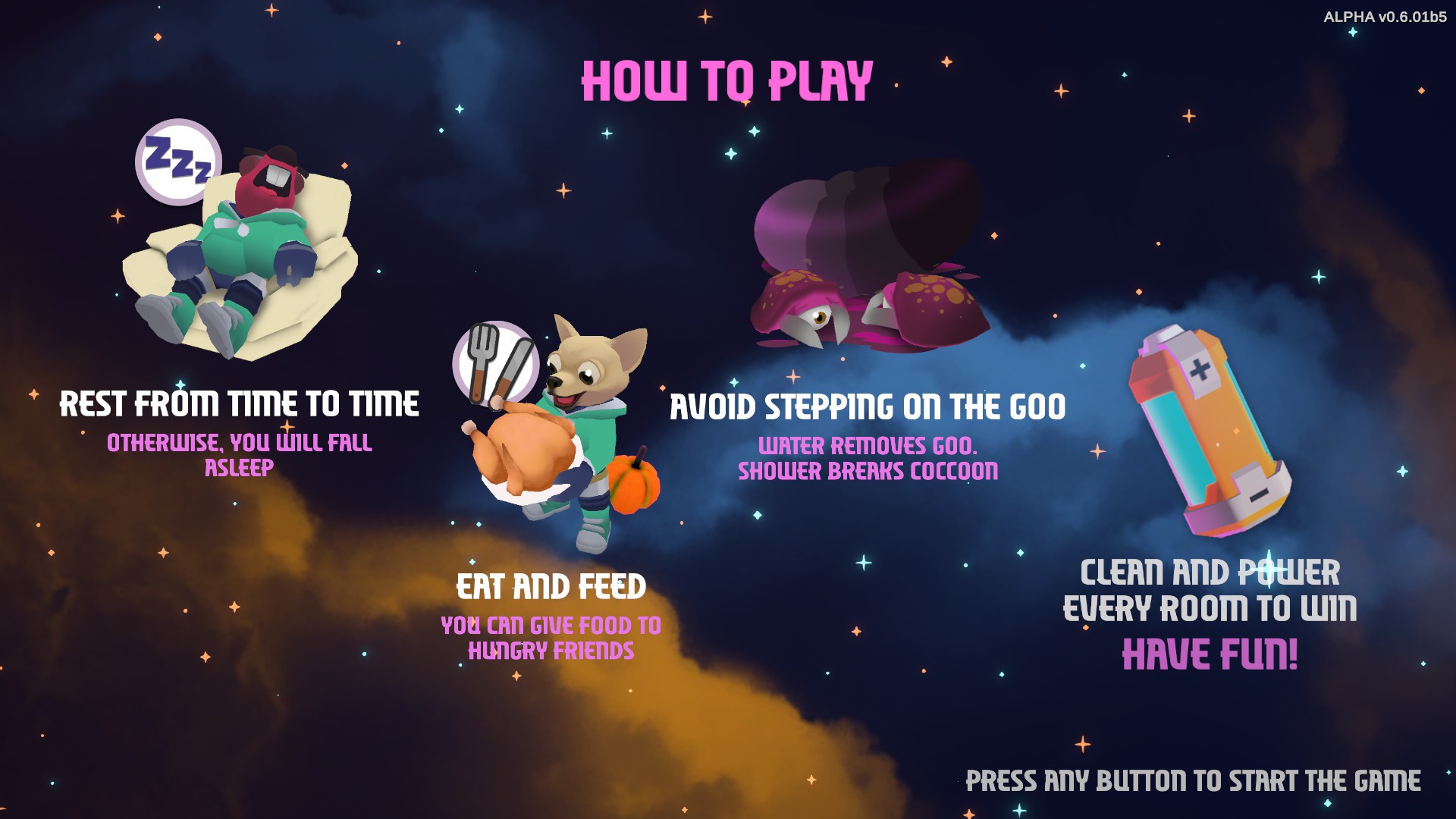 To get new furniture, you either deploy crates that you find or order them through space mail service (press Y on your controller to browse through the catalogue). To get new credits, you need to recycle organic matter (garbage or aliens). Again, there was nothing to explain this properly, I initially threw the stuff I didn’t want into space rather than recycling it. The oven, the fridge and a few other important types of equipment are required to be connected to a battery. Some of the rooms provide a slot to fit in a battery, and it’s important to secure such a room quickly (you might be more or less lucky when a spaceship is generated) and make sure that you keep aliens away from it as they destroy your batteries and you will have to order a new one (which is a huge PAIN). If you’re out of credits and your installation is not good enough for survival, it might as well be a game over as you are Out of Fun. Restart the game to have a new randomly generated spaceship. 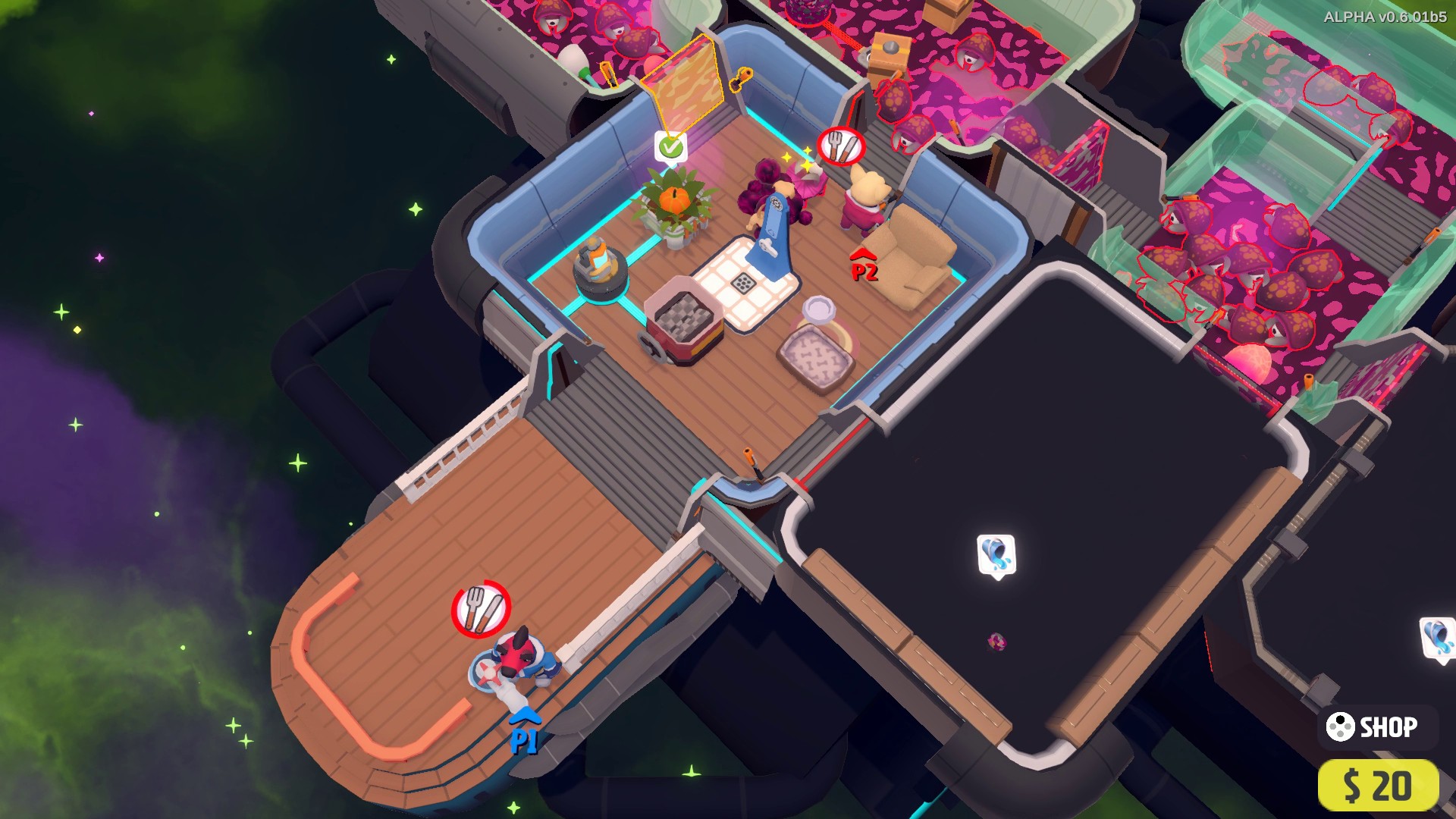 Water buckets help you water the pumpkin farm, clean a large area or destroy alien eggs. For normal goo, simply use the mop, but be careful as the mop tires you and you can soon find yourself asleep in the middle of an infested room. Then you can find yourself turned into a cocoon, and the other players will need to bring you to the shower. Even if you want to be careful and avoid chewing more than you can handle, some aliens can contaminate doors and find a way to get you. 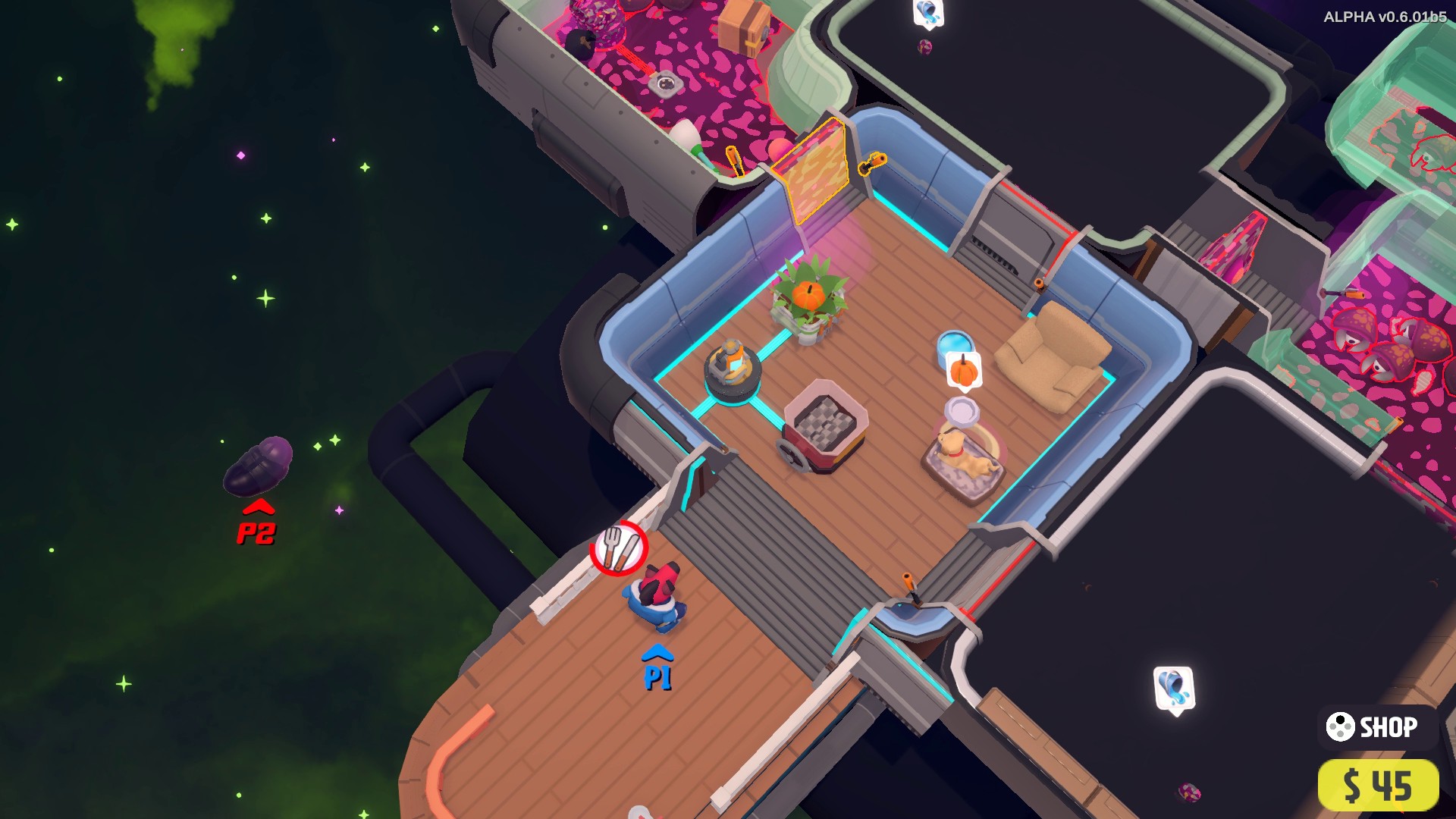 In effect, it’s a nightmare of micro-actions. Carrying things prevents you from opening doors, so you have to drop your item, open the door, pick up your item again. You need to juggle between constant hunger and sleep while watering pumpkins while watering doors while mopping stains while carrying aliens to the recycler. The moment-to-moment action in the game is absolutely not fun, especially at the start of the game. The only saving grace is a nice space puppy that helps you keep the aliens at bay.

It gets progressively better as you clear room after room and expands your little home-sweet-home. Despite all my criticism, there is something attractive about this game, and I enjoyed conquering the spaceship. I actually cleaned a whole spaceship during a solo run, but the game didn’t end. I tried mopping every room again since it’s hard to know the difference between “almost completely clean” and “completely clean”, but nothing happened, except forcing my character to nap every few seconds. 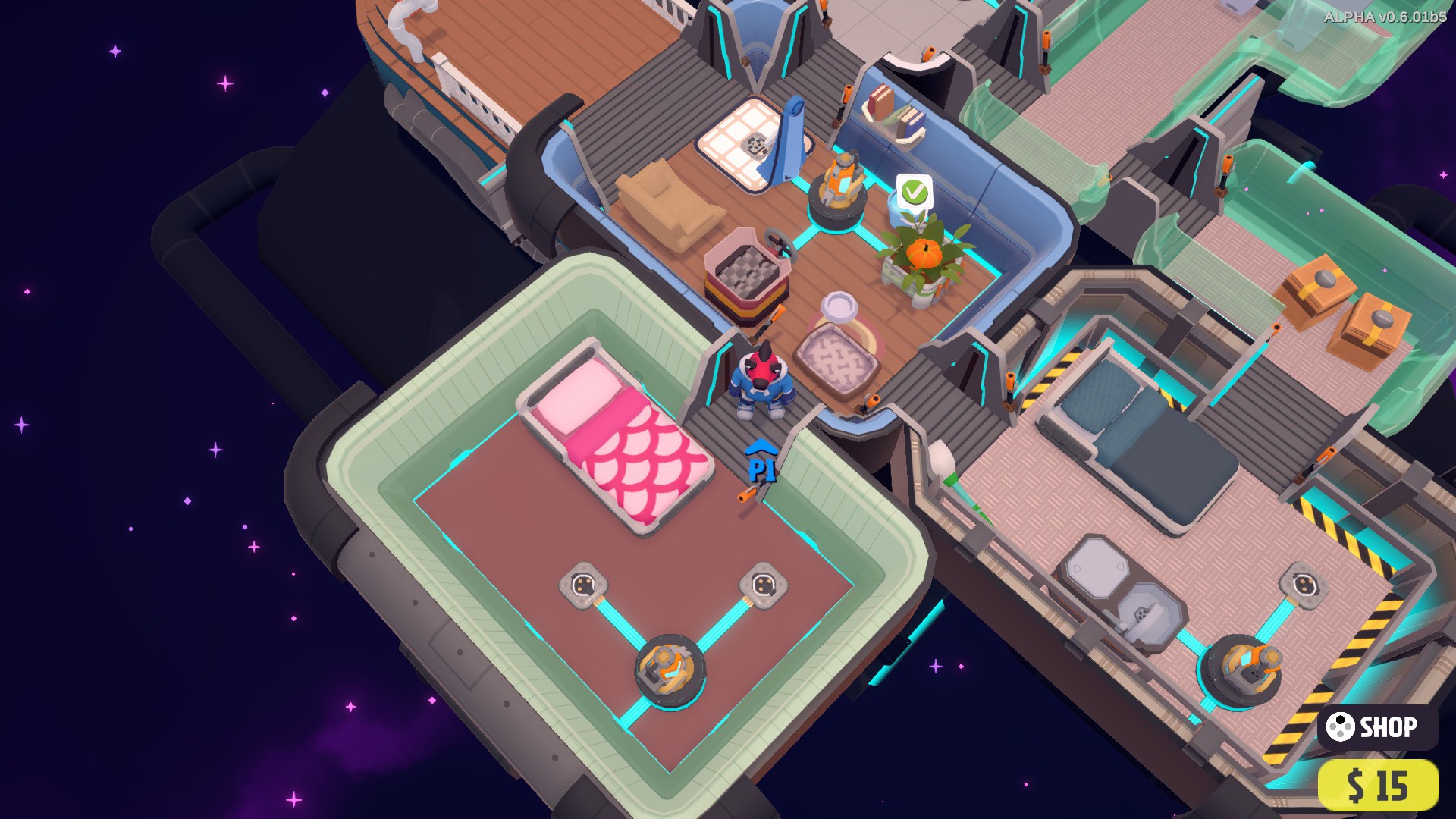 The graphics are really cute, but we regretted not being able to choose from a larger pool of characters rather than being stuck as P1 P2 P3 P4. Strangely, the framerate was tanking when I was mopping furiously and my controller was vibrating. 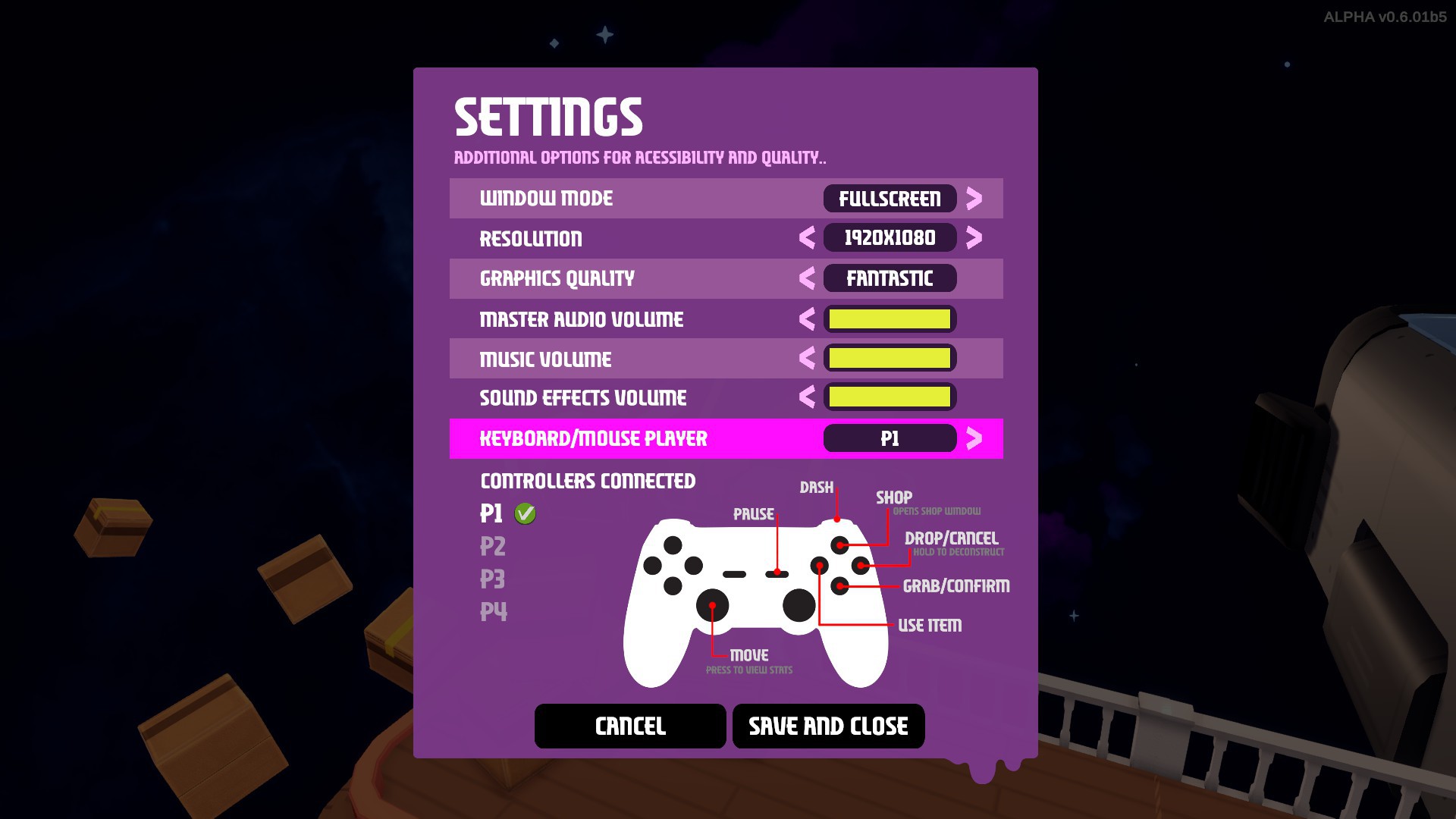 Out of Space is attractive with its space setting and the idea of setting up a home in a dangerous spaceship that you conquer room after room, but we did not have fun doing so. The survival aspect while being overwhelmed by dirty self-replicating aliens made for a tedious and difficult game, and constantly having to restart wasn’t our idea of a nice party. If this game is aimed at a very hardcore audience rather than the party game audience, then the cute art style probably isn’t fitting. Otherwise, let’s hope that the developers make the experience more fun while the game is still in Early Access.