PREVIEW: Save Your Nuts

A party game modeled after a very nutty sports in the animal kingdom.

Football players have it easy: whoever scores, they get sufficiently paid to put food on the table at the end of the day. When you don’t have an entire entertainment industry to back you up, such as is the case with animals, you can only eat what you score. That’s the sad reality behind Save Your Nuts, in which the animal kingdom is fiercely fighting over who gets all five nuts in the yard. Some might die from alligators, some might die from spikes suddenly bursting out of the ground: they will all be remembered. Or we’ll just laugh it off and enjoy the party!

Save Your Nuts is a local multiplayer game with online capabilities and up to 8 players/bots. It’s in Early Access, but this game is already surprisingly fun and appealing!

Easy to learn, easy to master

The players are divided into two teams, as each team attempts to score a nut. I usually don’t even like sports games, but here the players can thankfully attack each other to grab the ball. The ball sort of sticks to whoever has it, so it’s not necessary to keep complicated physics in mind: just attack or shoot. For casual players, this is very accessible and instantly easy to play. Each animal has slightly different stats, and there are lots of power-ups to boost them such as hot dog buns for shields and other treats for speed boosts and increased strength. Some strong power-ups can be dug up from the ground, like a jetpack or a bomb. 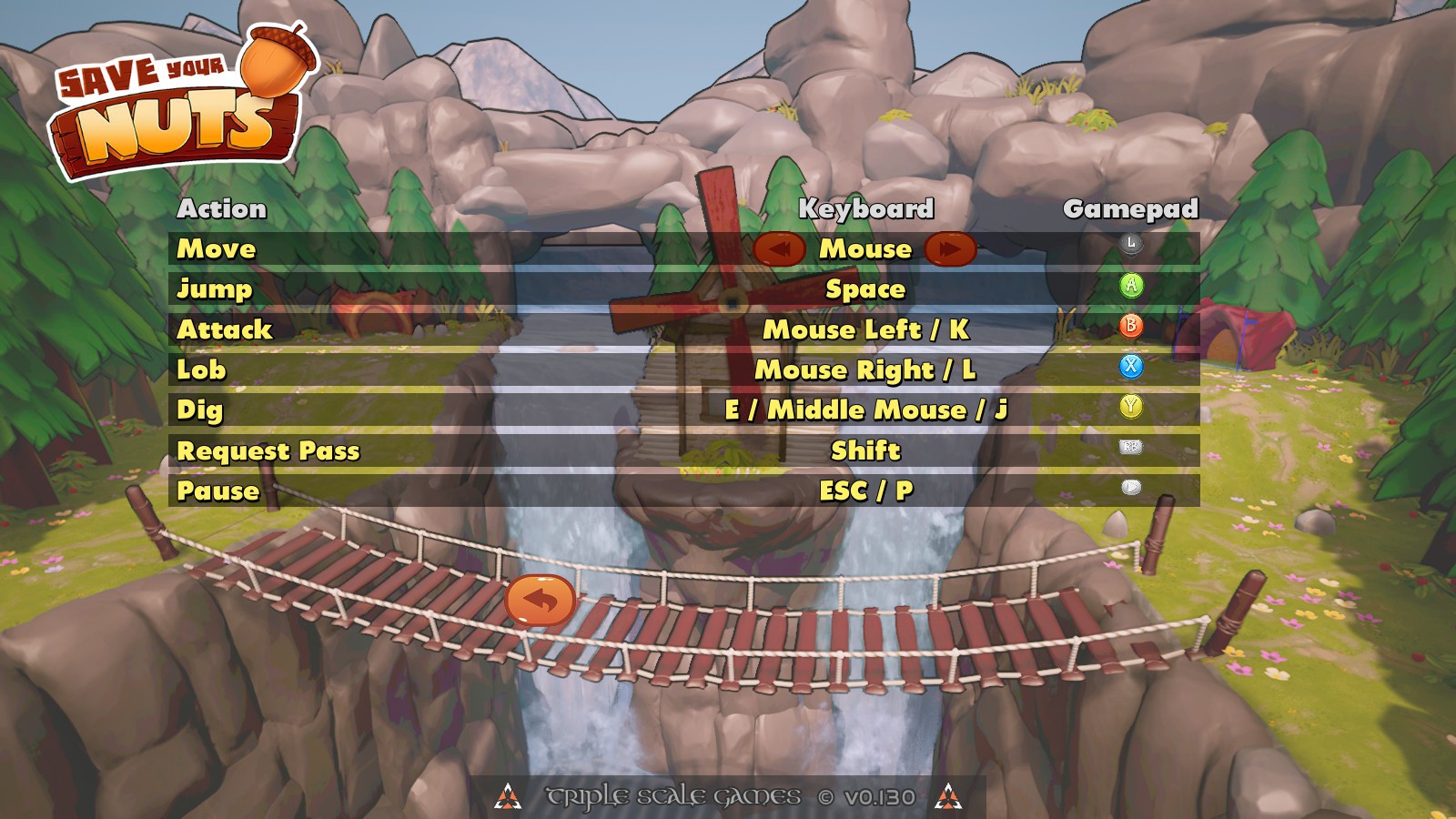 There is often a lot going on at any given moment, it’s very chaotic, but you always feel sufficiently in control and you can tactically position yourself to anticipate a situation. We really enjoyed this mix, as it made the game fun and deep at the same time, without having to master complicated controls. It all just flows perfectly well, even when there are eight players on the field. Unlike some party games that are too difficult for casual players to pick up or too boring for core players, Save Your Nuts seems to be fun for everyone at the same time. 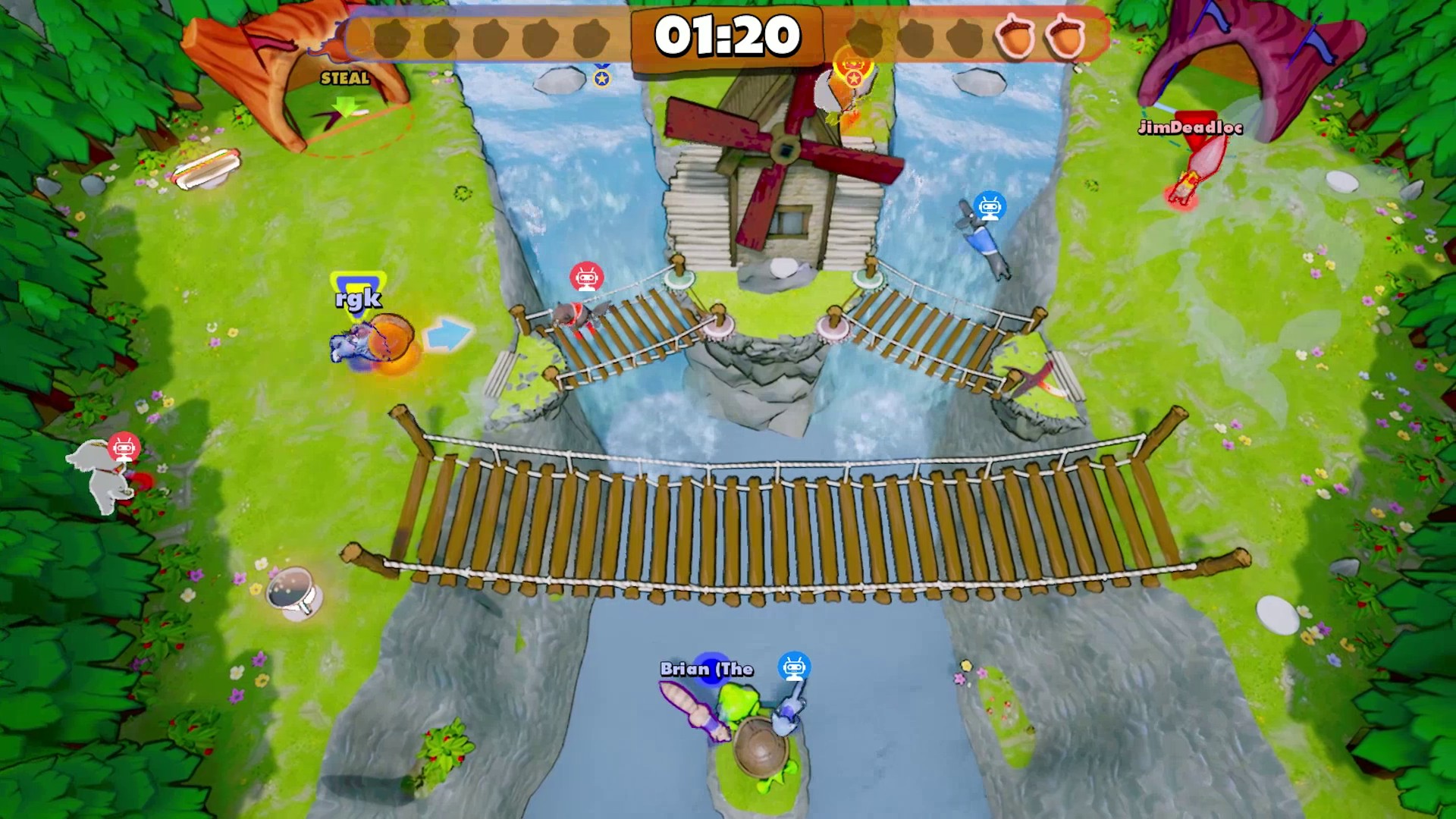 There are three game modes. There is the classic one with one nut as the ball; there is a crazy version of this with five nuts in play at the same time on the field, and a scored nut can be stolen from the enemy goal by digging up; finally, there is some sort of team deathmatch with balloons representing the three life-points that each player has. While the game mode with five nuts was a blast, we weren’t so enthused with the deathmatch as the combat was too messy to be enjoyable. There is an exception. though. In the map with two pirate ships: we could shoot the cannons before boarding the other ship, this made the assault quite memorable! 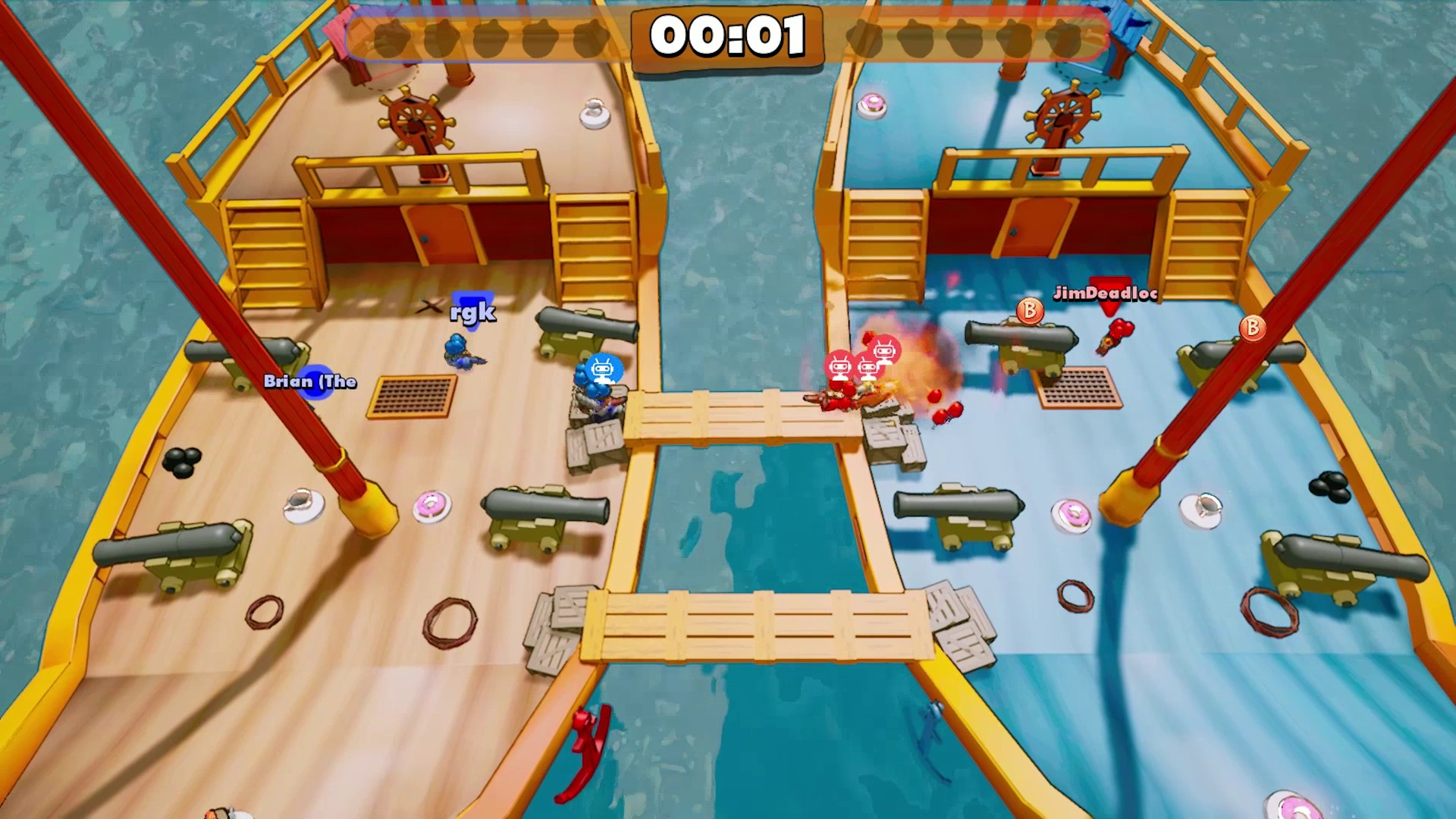 While the first map is fairly vanilla, the other maps that you can unlock progressively get crazier and crazier, and clearly a highlight of this game. Several of the maps make use of the 3D to give depth to the action, while others have all sorts of environmental hazards that activate automatically or when a player triggers them. All these arenas help to renew the experience, and this means that it’s a game in which you can easily sink a few hours into without feeling bored. 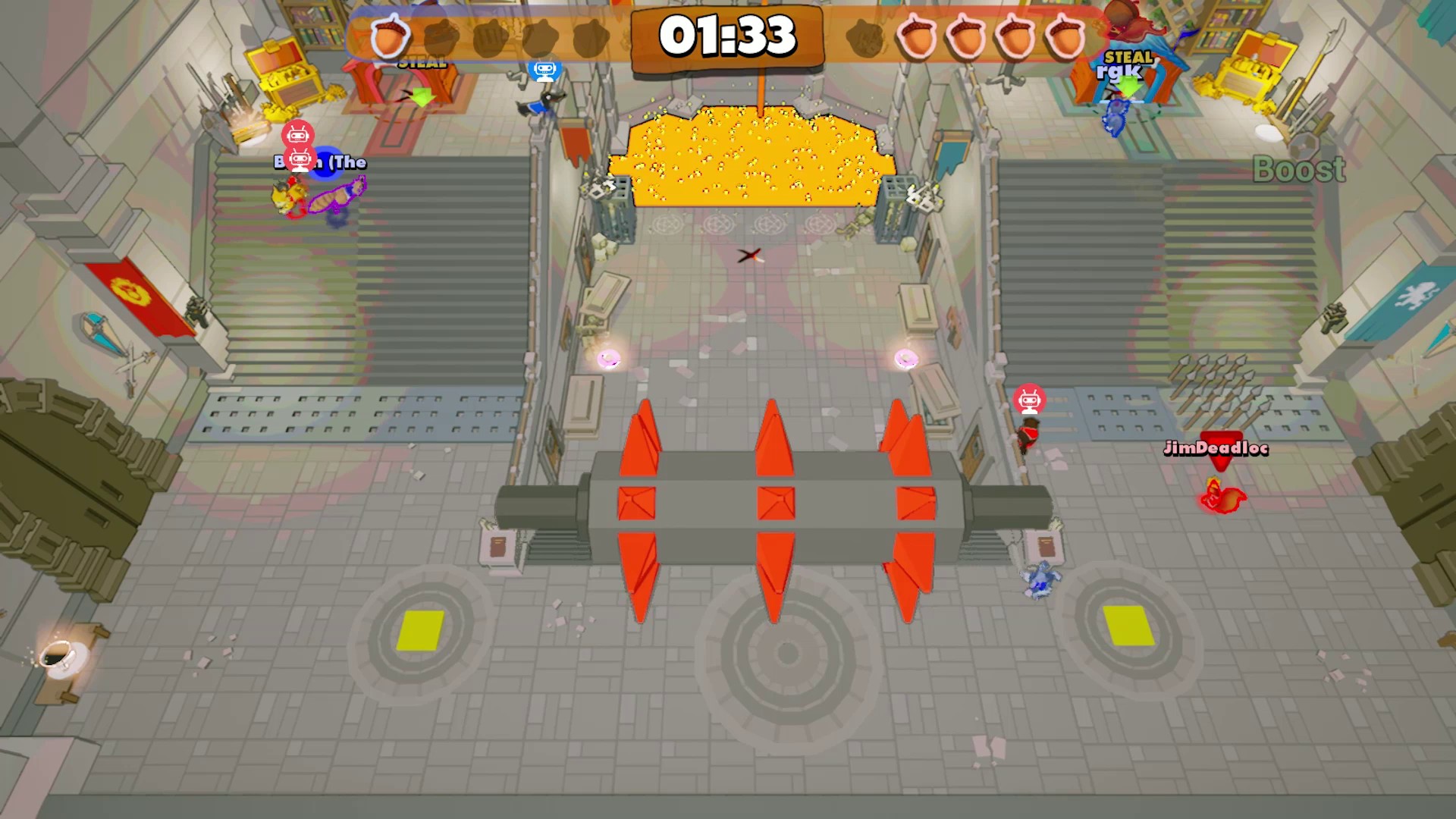 Now that I praised Save Your Nuts, I will insist that it’s an Early Access title and it’s still rough around the edges. At the time as when we recorded the video accompanying this article, we saw bots getting stuck on several occasions, and one of the game modes simply didn’t launch in local play. At some point the executable was missing! However, we opted in to the online beta, and we had a surprisingly smooth online experience; the netcode seemed really solid. Since then, Triple Scale Games already fixed the launch issues and the game works properly. Furthermore, the HUD was improved and the score is now easier to follow: it seems like Trip Scale Games is on top of things and the time in Early Access will be fruitful to iron out the kinks. 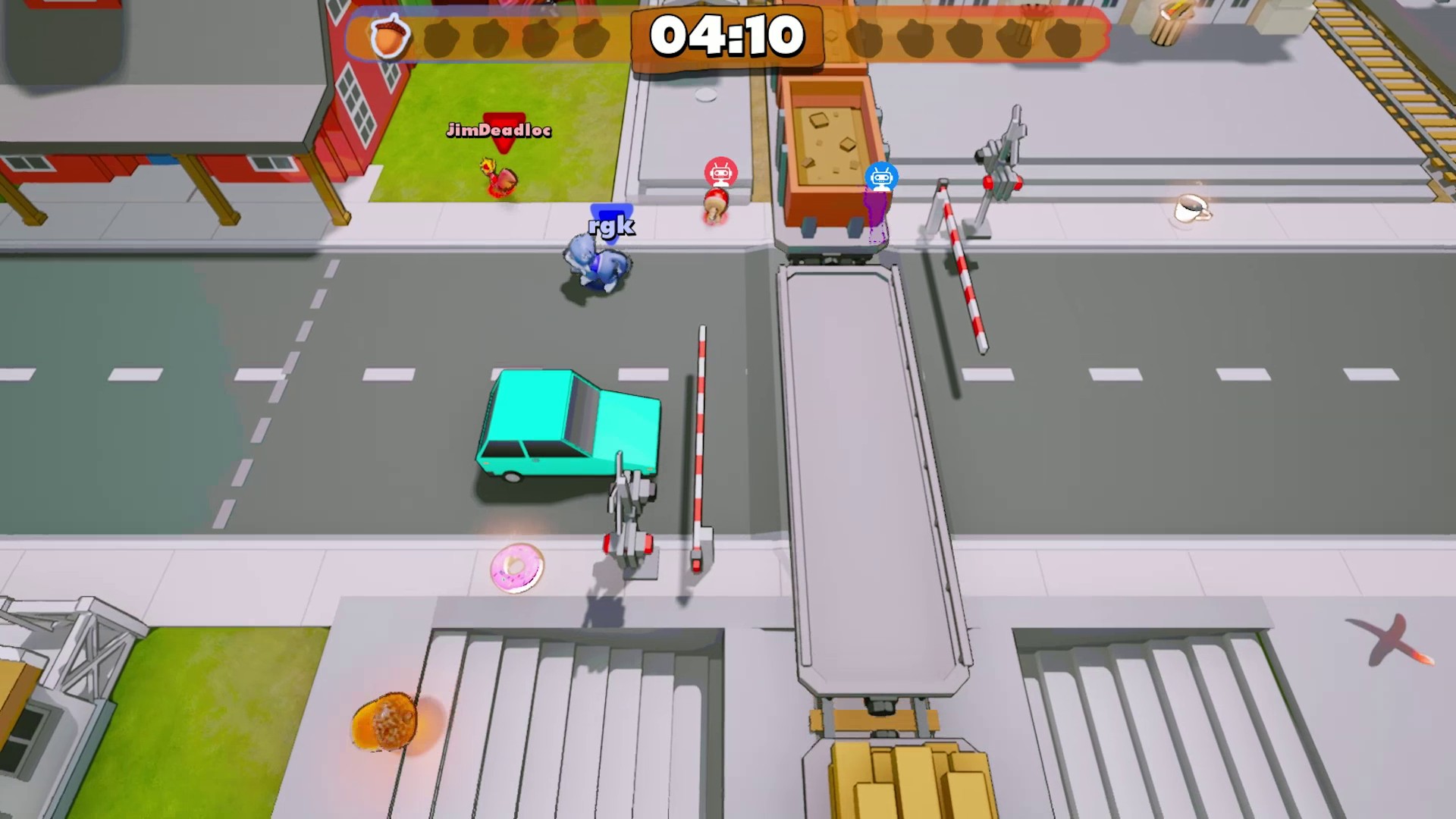 Art-wise, while the game is certainly not painful to look at, I find that it is not particularly pretty either. It’s all a bit bland and doesn’t stand out as a unique art style. There are hats to choose from and fur colors to customize your little critters, though. 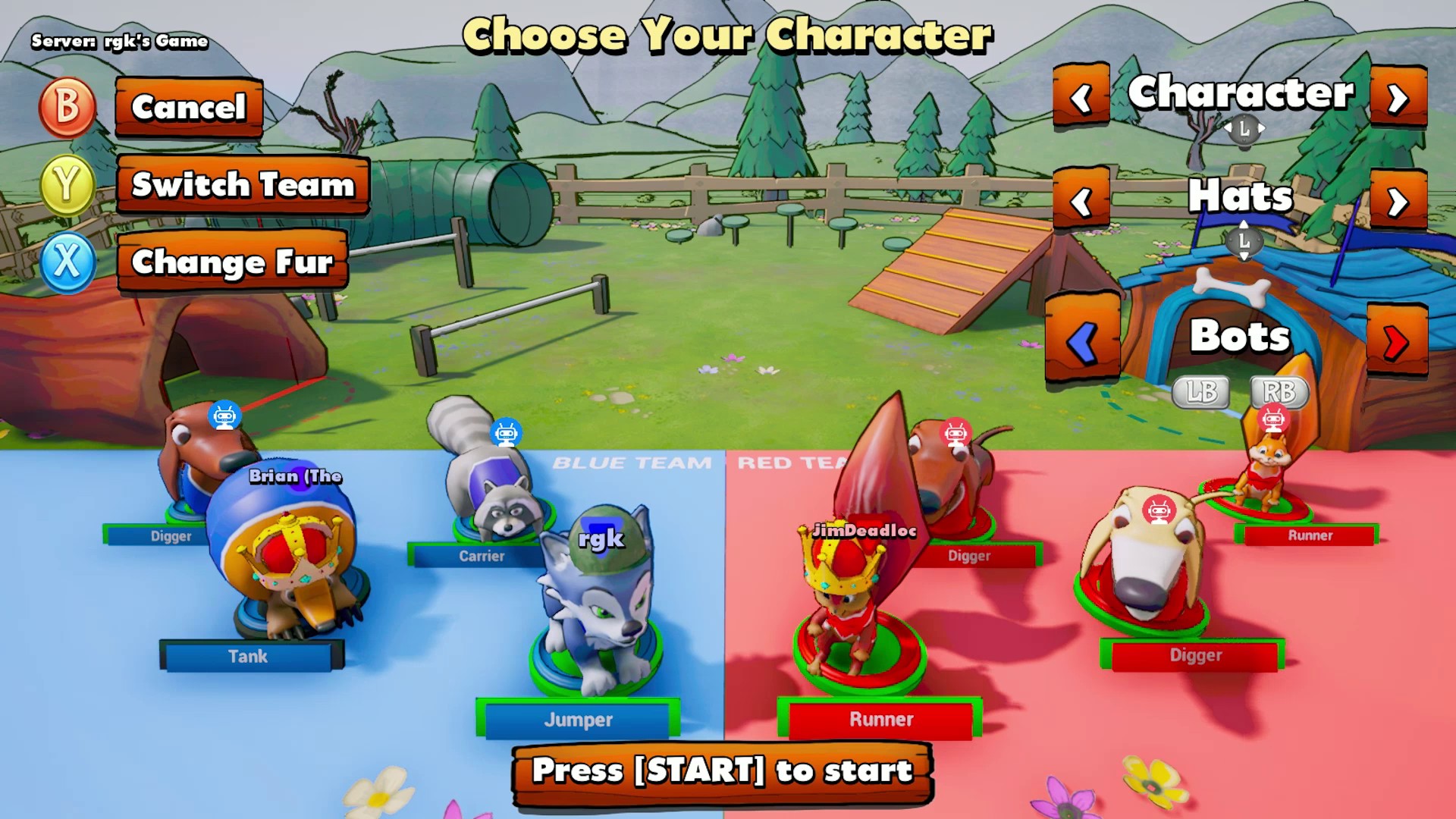 Save Your Nuts still needs a little more polish, but we already found this game to be very enjoyable. It’s accessible, it’s chaotic, but it’s also varied and with enough tactical depth to please everyone. A worthy addition to your party games toolset!