When Devolver Digital showed us the first glimpse of Katana ZERO, I was ecstatic. An ultraviolent fast-paced 2D action platformer, with gorgeous pixel art and cyberpunk aesthetics, this is what I live for! And yet, my first moments with the game were not what I expected. Good thing or bad thing? Please read on to find out!

Katana ZERO puts you in the shoes of a mysterious swordsman suffering from terrible nightmares. Strangely, his psychiatrist sends him on various contracts that relate to a particularly potent kind of drug, the kind that allows you to stop and rewind time. 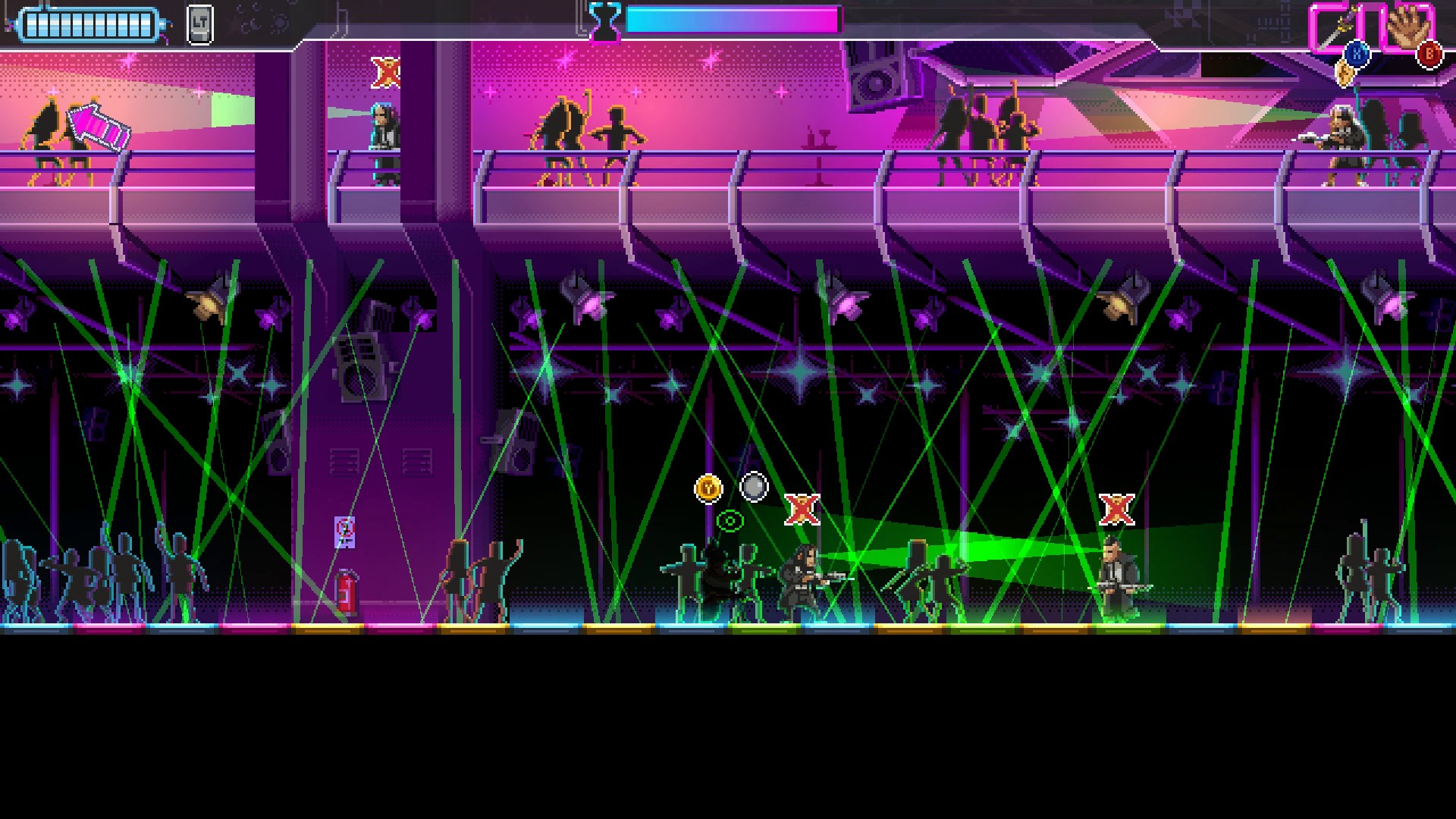 As expected, the combat is fast-paced and meaty, as our slashes instantly kill the poor gangsters that dare exist in between our sword and the objective. A bright light followed by blood gushing out and painting the walls: it feels amazing, especially when there is such a blood-pumping electronic soundtrack. Apart from slashes, our hero can also occasionally pick up some items and throw them, such as hatchets, Molotov cocktails or smoke grenades. As we have recently seen with APE OUT, melee-focused characters need a little extra push to survive against enemy gunmen. Katana ZERO provides two such methods. One is a dodge-roll with invincibility frames. The other one is the ability to slow time down to a crawl, which is perfect to deflect a bullet and return it back to the sender. 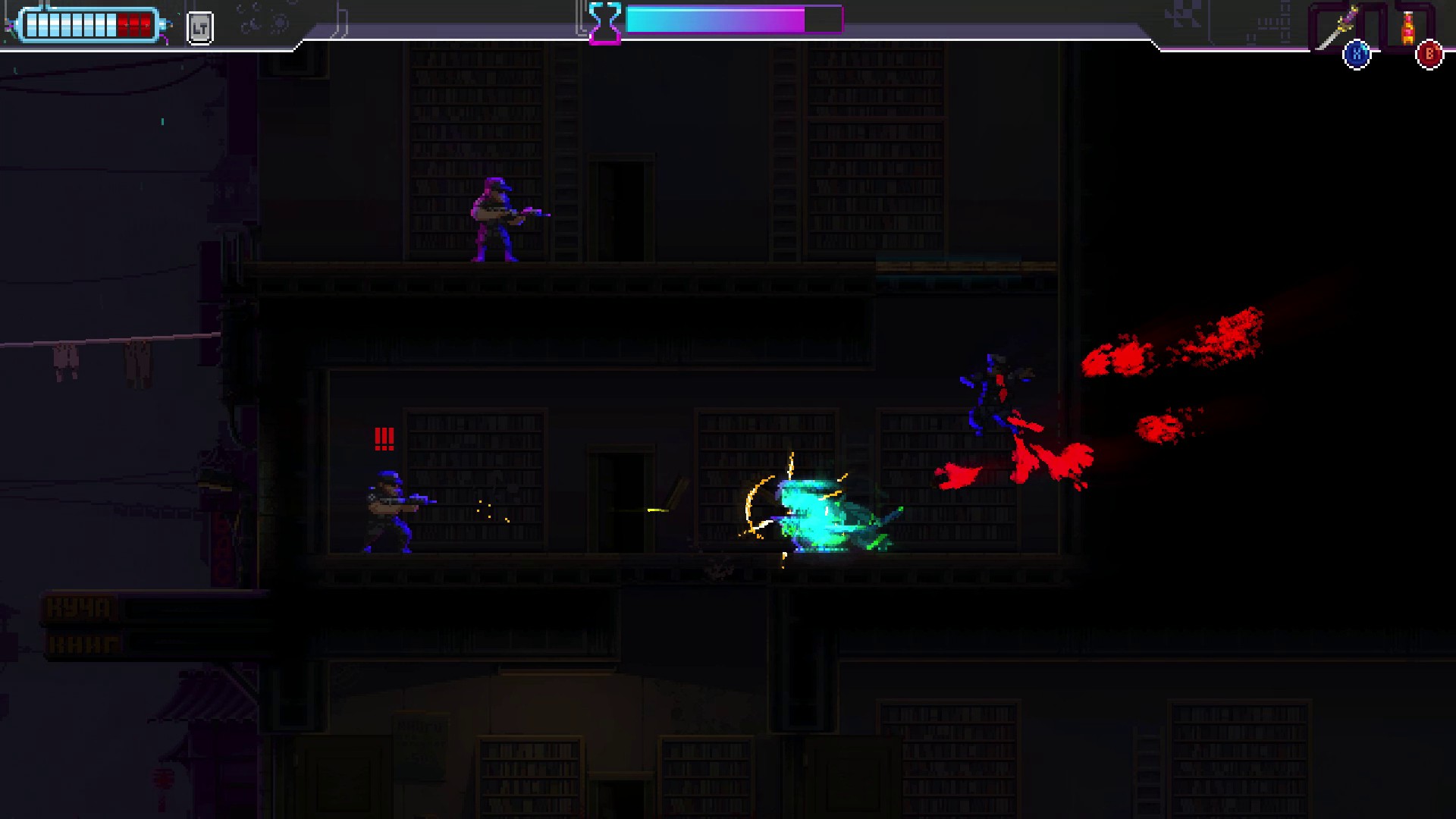 These two methods of fighting allow the game to please several types of players, and I will explain why. Contrary to what I anticipated, I actually hated the time-stopping ability, for the same reason that I hated the possibility to watch a black and white recording of a successful level upon completion: it halted the flow. My twitch fingers were ready for fast-paced action, and yet there were these moments when I was just frustratingly waiting for the game to let me move again. These replays of the levels can be canceled quickly, but it’s still a few extra seconds of downtime. I feel the same about the slow-mo moments: I don’t want to wait for the door to open, for the bullet to come in range and so on, I want to DO something NOW, not wait. I ended up disliking the game because of that, since many enemies are simply too fast to dispatch before they shoot in real-time. Then, I decided to play the game the way I preferred, by doing my best not to rely on slow-mo to succeed. It was much more difficult, but it was still possible thanks to that dodge-roll move. Once I had mastered it, I finally started enjoying my time in the game. Thus, I can say that the powers wielded by our swordsman can appeal to both hardcore players who breeze through the levels as well as the rest of the audience who can take advantage of slow-mo to decimate the opposition. 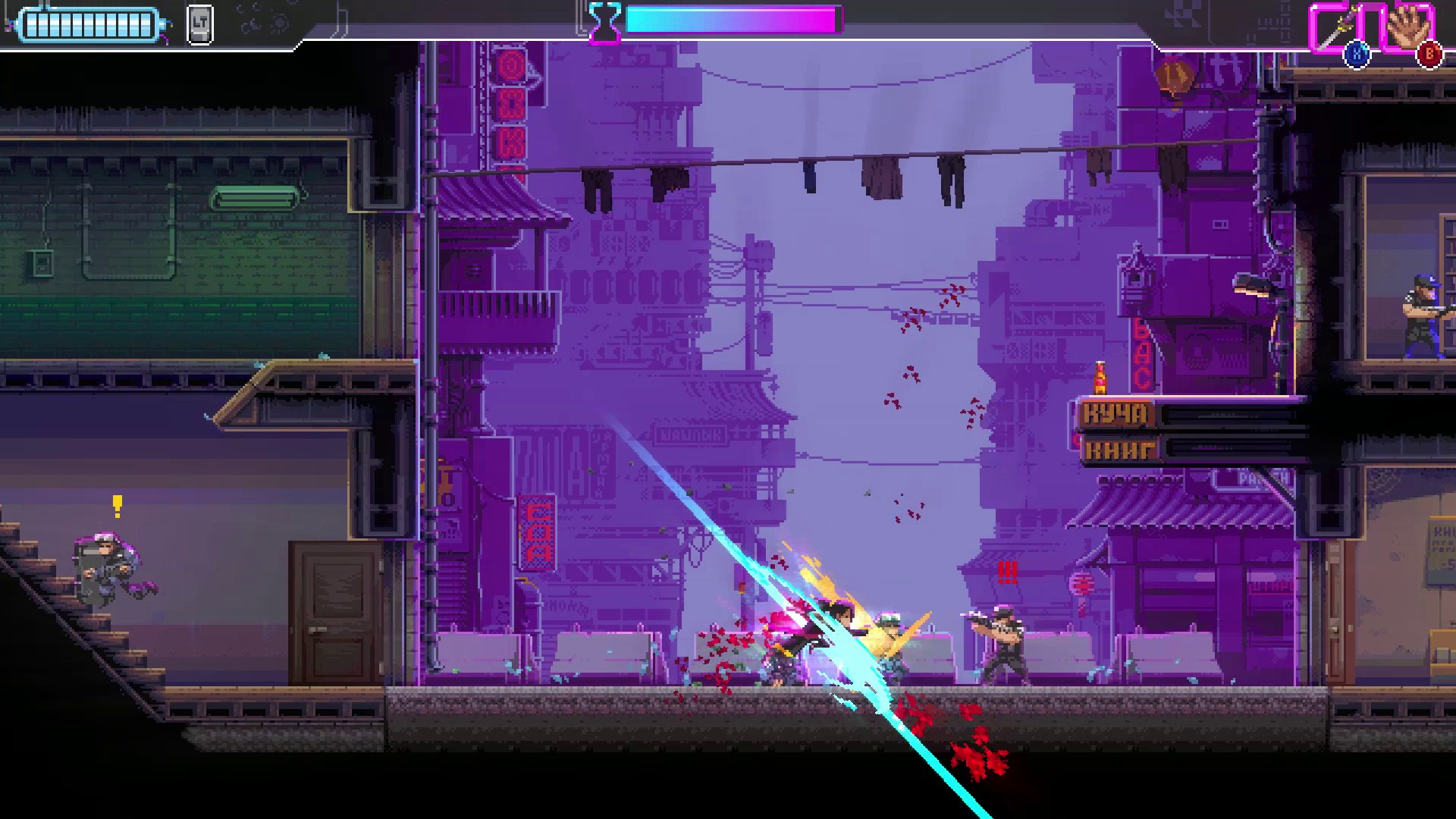 There are plenty of checkpoints, you never have to restart far from where you died. In terms of overall difficulty, it’s easy until about half-way of its four hour runtime. From then on, there are more and more screens with a high density of gunmen that need to be dispatched with… subtlety. However, the base formula does not evolve too much. Instead of giving the player new powers, variety comes from additional phases (such as a motorbike fight) and the occasional boss fights that push the player’s abilities to their limits. I loved those fights, as they combined pattern learning with the necessity for quick reflexes (or you can use slow-mo). 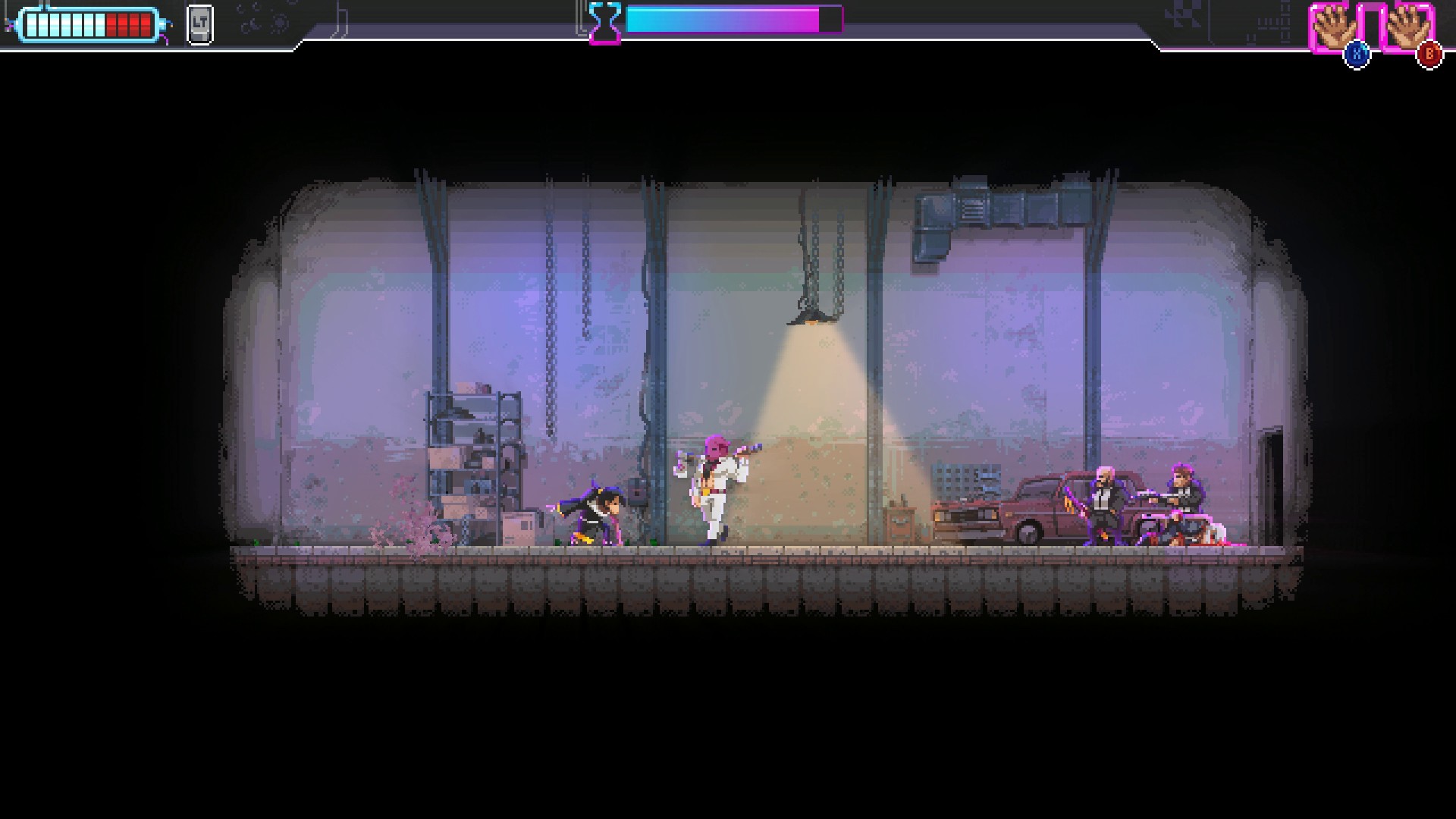 I tried both with mouse & keyboard and with a controller. While both support rebindable keys, the basic layout provided by the game was actually perfect for me, and it is pure joy to control our swordsman. On the whole, this game is technically and artistically on point; the game runs well with practically non-existent loading times, while the pixel-art on display is beautifully enhanced with detailed animations and pretty lighting effects. 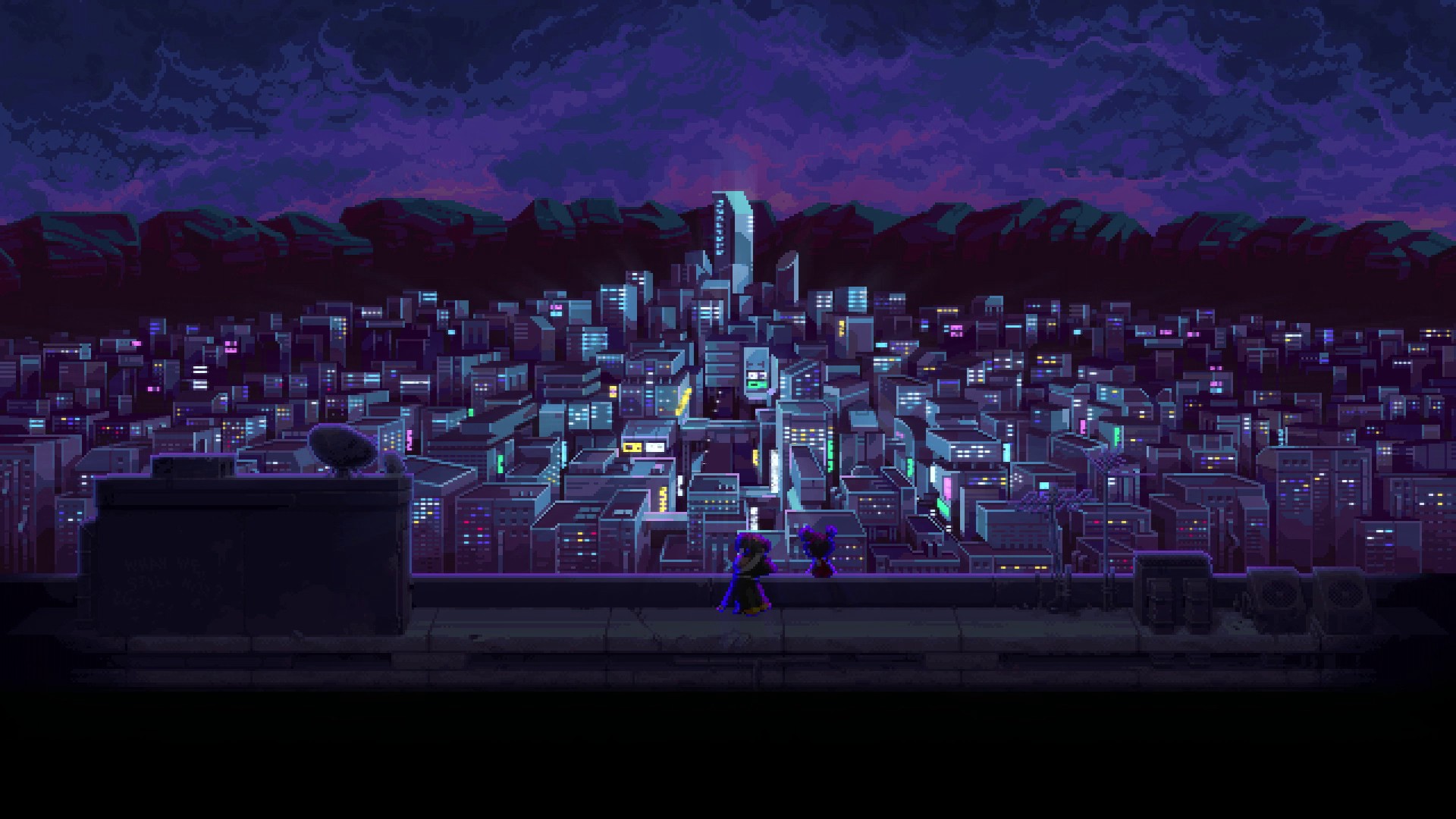 Finally, I need to mention the story. When I first laid my hands on the game, I was slightly taken aback. The beginning was too wordy, and the combat wasn’t meaty enough. It’s the usual cyberpunk plot of government conspiracies, reality-bending drugs and the search for identity. Then the more I played the game, the more I enjoyed the combat (as I was getting better at doing smooth dodge-rolls). Same goes for the story, inspired subplots caught my interest, and most importantly it’s the delivery that really shines. What I mean with the delivery is that it stems from the great art once again, with superb animations and effects, but also from frequent dialogue prompts that allow the player to get deeply immersed in the story and role-play as the main character rather than simply be a spectator pressing a button to unfold the text. While there are many lines to choose from, only a few actually change the plot, but it does so in a truly memorable manner: from fooling around with the Hotel receptionist to unlocking an epic secret boss fight. While the game can be completed within roughly four hours, I loved spending some more time with it afterward to hunt down achievements and explore secrets. 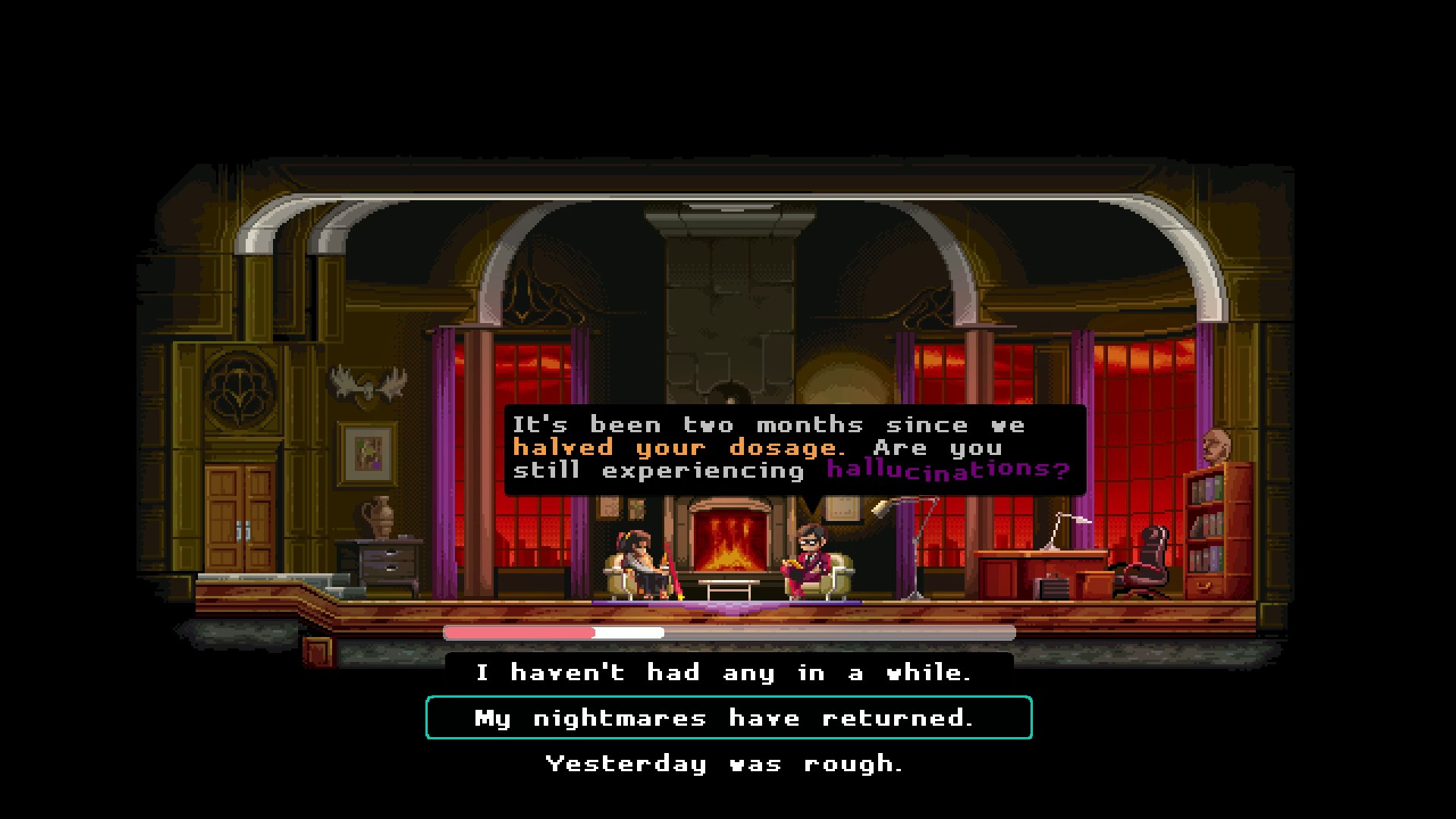 I will quickly talk about the elephant in the room that is Hotline Miami: Yes, Katana ZERO has a very similar vibe, from its violent and fast-paced combat to its very noir plot, from its music to its retro-inspired aesthetics. While Katana ZERO is not the surprise masterpiece that Hotline Miami was, if you liked Hotline Miami and you like 2D games, chances are you will enjoy Katana ZERO. Just expect a more melee-focused experience and a lot more dialogue. 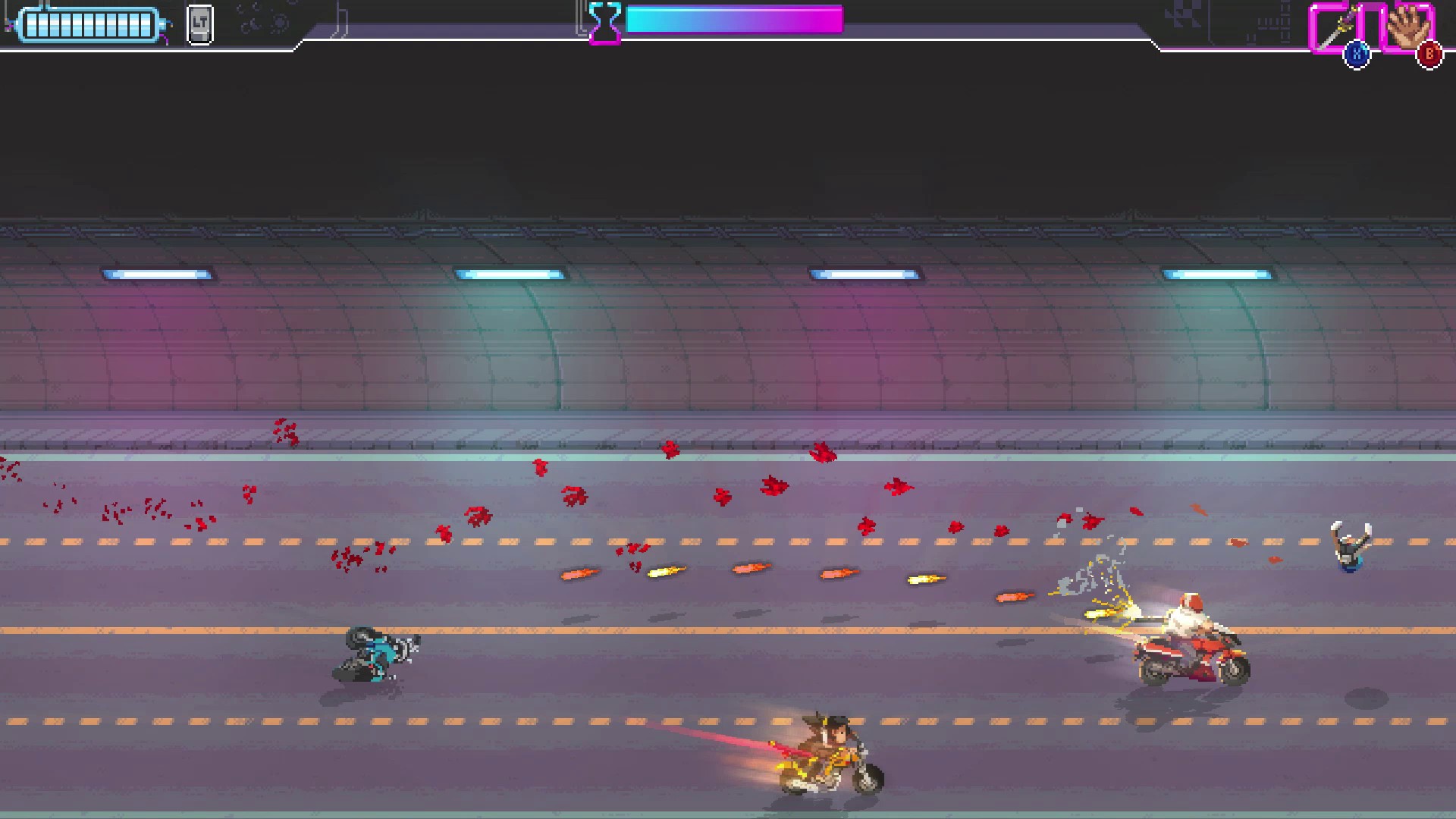 Katana ZERO appealed to me with its aesthetics and elegant fast-paced combat, but I was surprisingly captivated by its story, delivered in a very engaging manner. If you enjoy blood-pumping action and the darker cyberpunk themes, this is a treat. I can’t wait to play more in that universe; however, I would like a sequel to add variety to its core gameplay.