A most brutal escape.

Ape Out opened strongly to the collective consciousness with an adrenaline-fueled playable trailer in March 2017. Since then, Hotline Miami lovers have been left salivating over that over-the-top ultraviolent gorilla escape simulator. Indeed, it’s also a top-down game with blood, guns and a great flow. Guns? A gorilla? Well, this is a little bit more complicated than that, and it will contribute to the game’s biggest strength.

Before going into details with game mechanics, let’s start by talking about the presentation. There are four different chapters, each presenting a different environment to escape from: a flat building, a skyscraper, a military camp, a boat. Each chapter takes the form of a Vinyl-Disc with 8 songs or levels. This goes hand-in-hand with the jazzy procedural music that accompanies the action, as its drums adapt to what the player is doing. It’s very classy, and my only gripe is that it’s not possible to play a specific level or song: it has to be the whole disc. At least, when you leave the game you can resume where you left off. 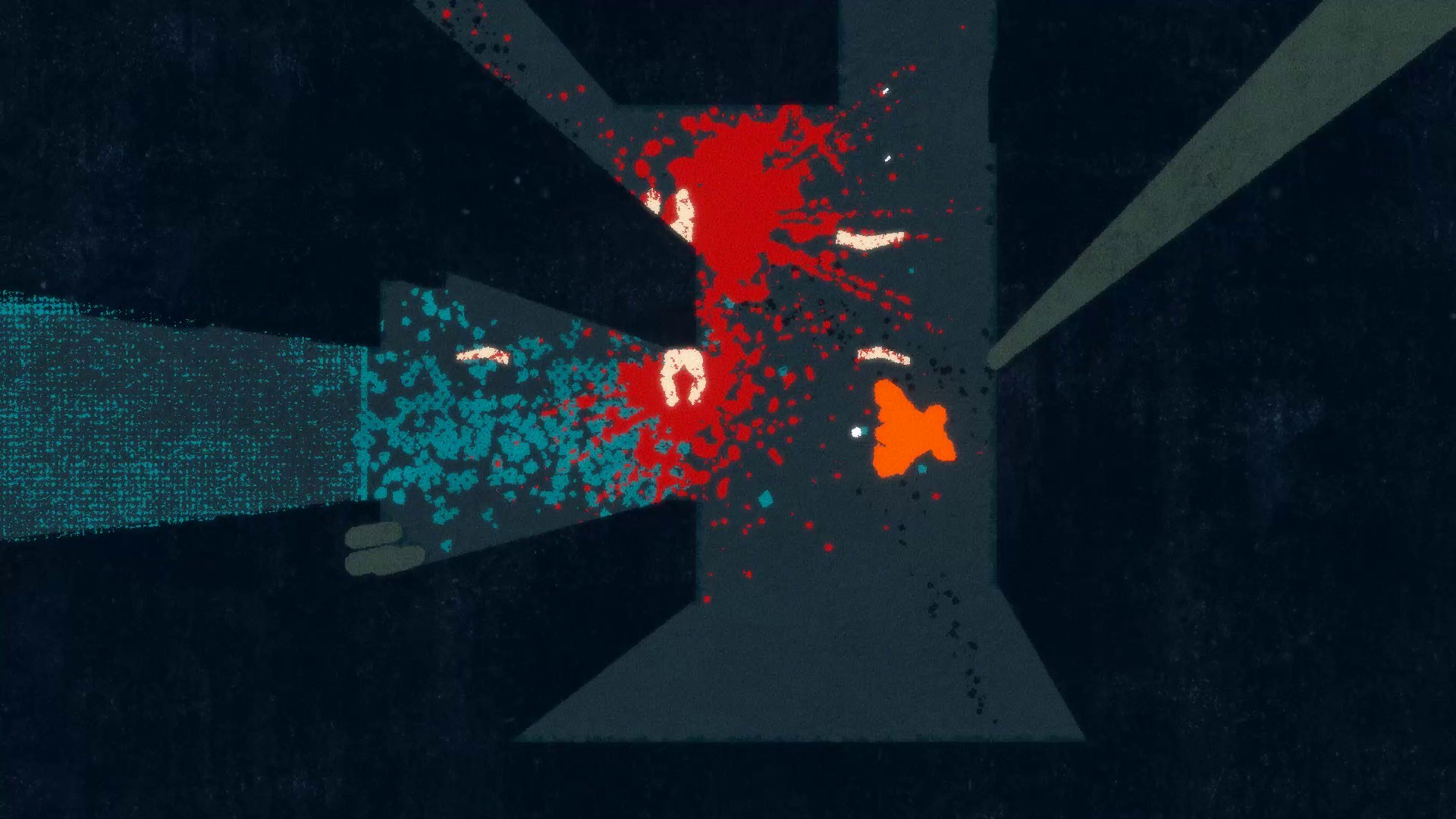 Not only is the music procedurally generated, but the levels see some variation too. There are some specific beats that will not change and the overall structure is controlled; for instance, there are some chokepoints or enemy introductions that will always play out the same. However, in between two set pieces, the corridors and rooms are always different. What this means is that the player cannot accurately memorize the level layout and enemy positions, each replay is a fresh challenge that has to be overtaken spontaneously. Beside this mechanical difference, it also plays into the higher theme of the game: our gorilla is not a cold-blooded killer, it is simply an animal trying to blindly escape from a human maze. This is reinforced by the graphics, first with its simple color palette, but also with the brilliant use of 3D as walls around the primate extend to the edge of the screen and hide your surroundings. Rooms and corridors are simple blocks, we don’t know what humans use them for or do in between these walls: the only thing that matters is to escape, running from corner to corner in the instinctive direction of the exit. Only upon death does the game show a map and retrace the steps of the player, giving a better idea of progress and convey a clear goal to anticipate. The only downside is that it makes the game quite light on story-telling, and each change in the environment is quickly noticed and savored. 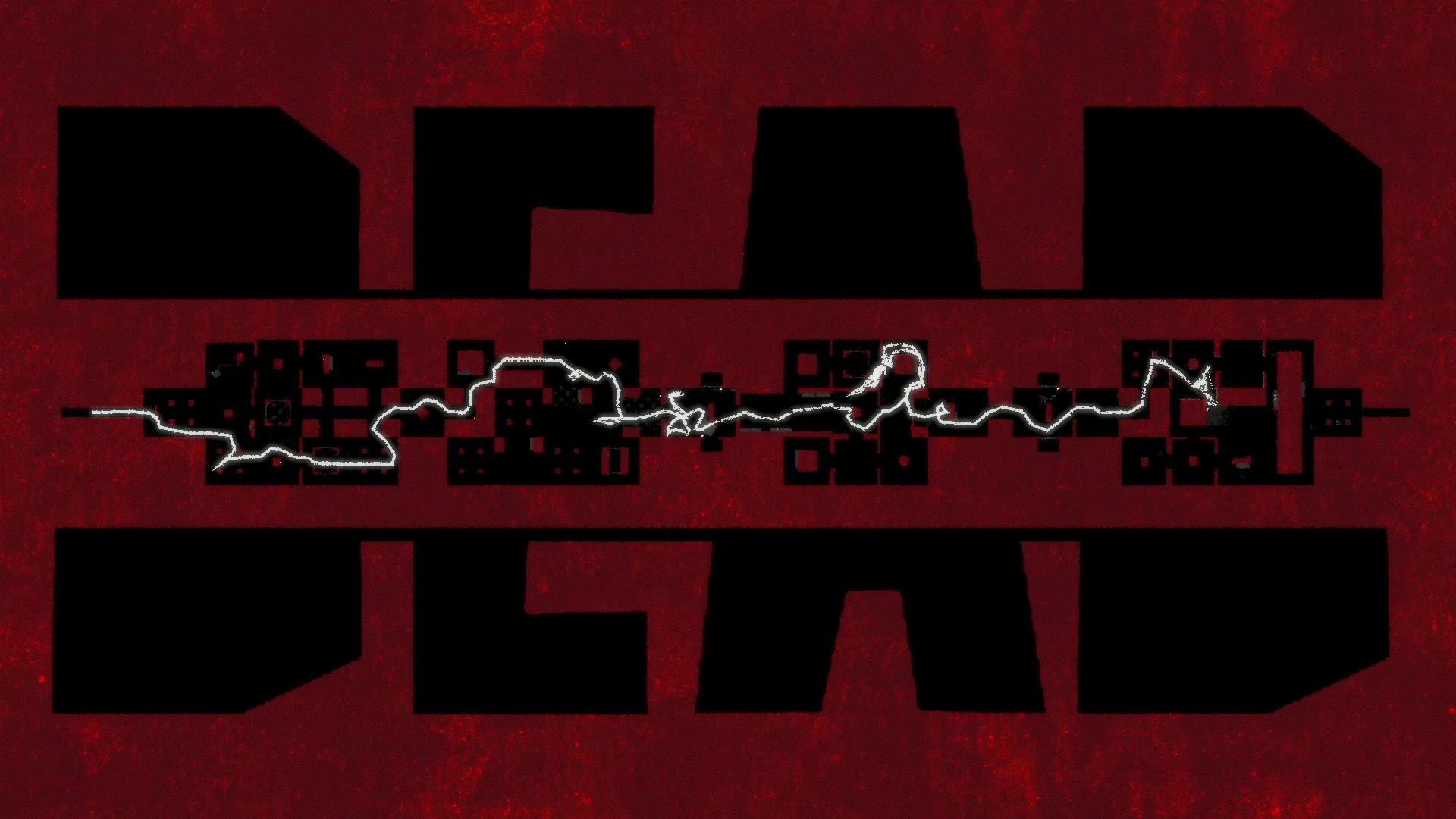 Rebinding keys is not possible, but the controls are fairly simple and work perfectly both with mouse & keyboard and a controller. You can move, aim, punch and grab/throw. While the punch is fairly straightforward and smashing enemies against walls with a single hit is immensely satisfying, I will spend more time on the grab. Our gorilla is a melee combatant, solving its problems with a good punch in the face. However, it’s also a game against men with guns. What could a punch do against a shotgun? Well, here is where our grab comes into place. Of course, you can’t directly grab a machine gun, or it would be pointless to play as a gorilla. Instead, you can grab enemies and force them to turn their gun against their friends! The advantage is triple. First, you steal from the enemies the possibility to shoot for a brief instant. Second, you get a meat shield protecting you. Third, you gain a projectile to throw at their squishy fellows. 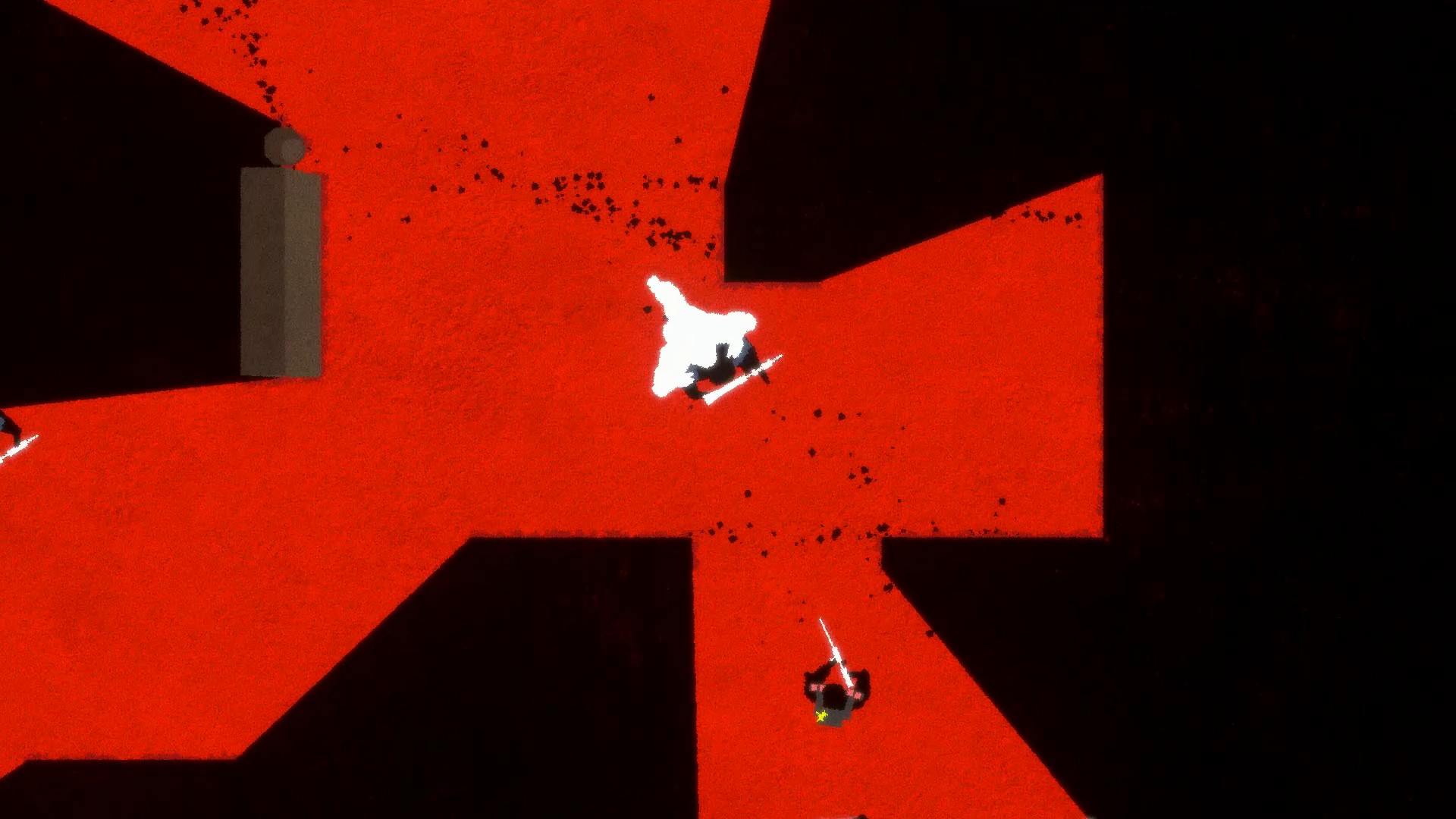 Lend me your arm

Grabbing is Ape Out‘s unique spin on the usual top-down game mechanics, and I must say that it was a joy to play. The moment-to-moment action is very smooth and tense, as you can at any moment find yourself in a precarious position and need to react quickly and adequately. Is a room full of enemies? Grab a machine gunner and clean the place. Did you grab an enemy with a belt of dynamite? If they get shot, the explosion will kill you instantly. This time, you need to throw the enemy as quickly as possible, and delight in a beautiful explosion taking out a bunch of them in a single swipe. Grabbing prevents repetition from setting in, as you always have to think with what you see in your direct vicinity, assess the options at your disposal and adapt to the situation, yet do this quickly and with skill. The game is freeform chaos at its best. It’s still possible to play without grabbing and focus on melee attacks, as all enemies give you a brief moment of respite while they take aim. Or you can keep running and never attack, there is an achievement for completing a chapter as a pacifist. Good luck with that. 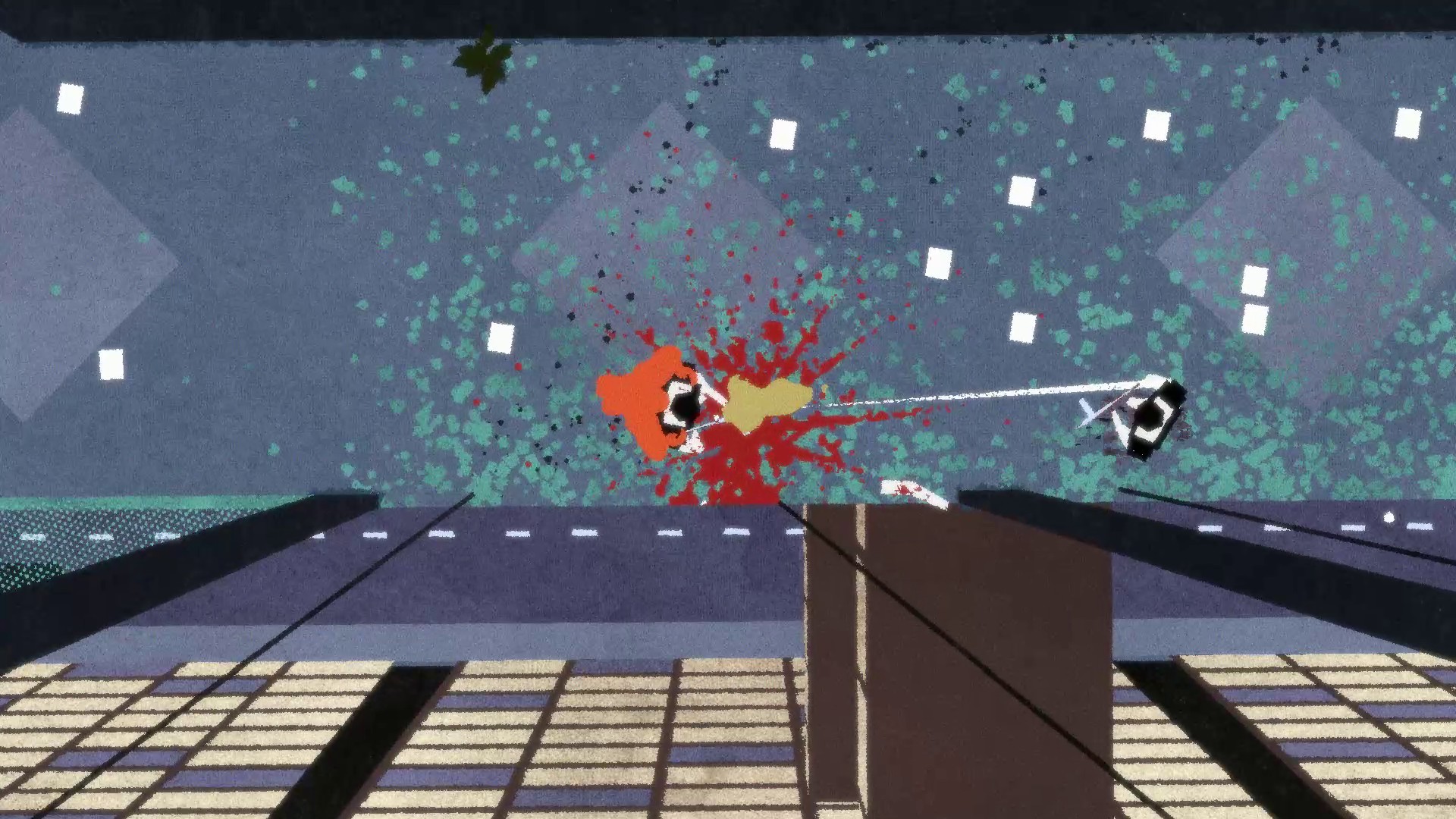 There is gore galore, and the marks left by explosions and bullets reinforce the satisfying feeling of brutality; nimble and fragile human bodies torn apart to small chunks is in stark contrast to the huge gorilla’s body. Except for explosions, your beast can sustain two shots and dies on the third, which can alter the pacing from feeling confident to being overly cautious. Both playstyles can be equally efficient, with the only catch being that grabbing slows you down. You don’t want to keep moving through the level at a snail’s pace. This contributes to the frantic escape, always running forward and (almost) never looking back. The sought-after state of flow is quickly felt in this game, I had a lot of fun. 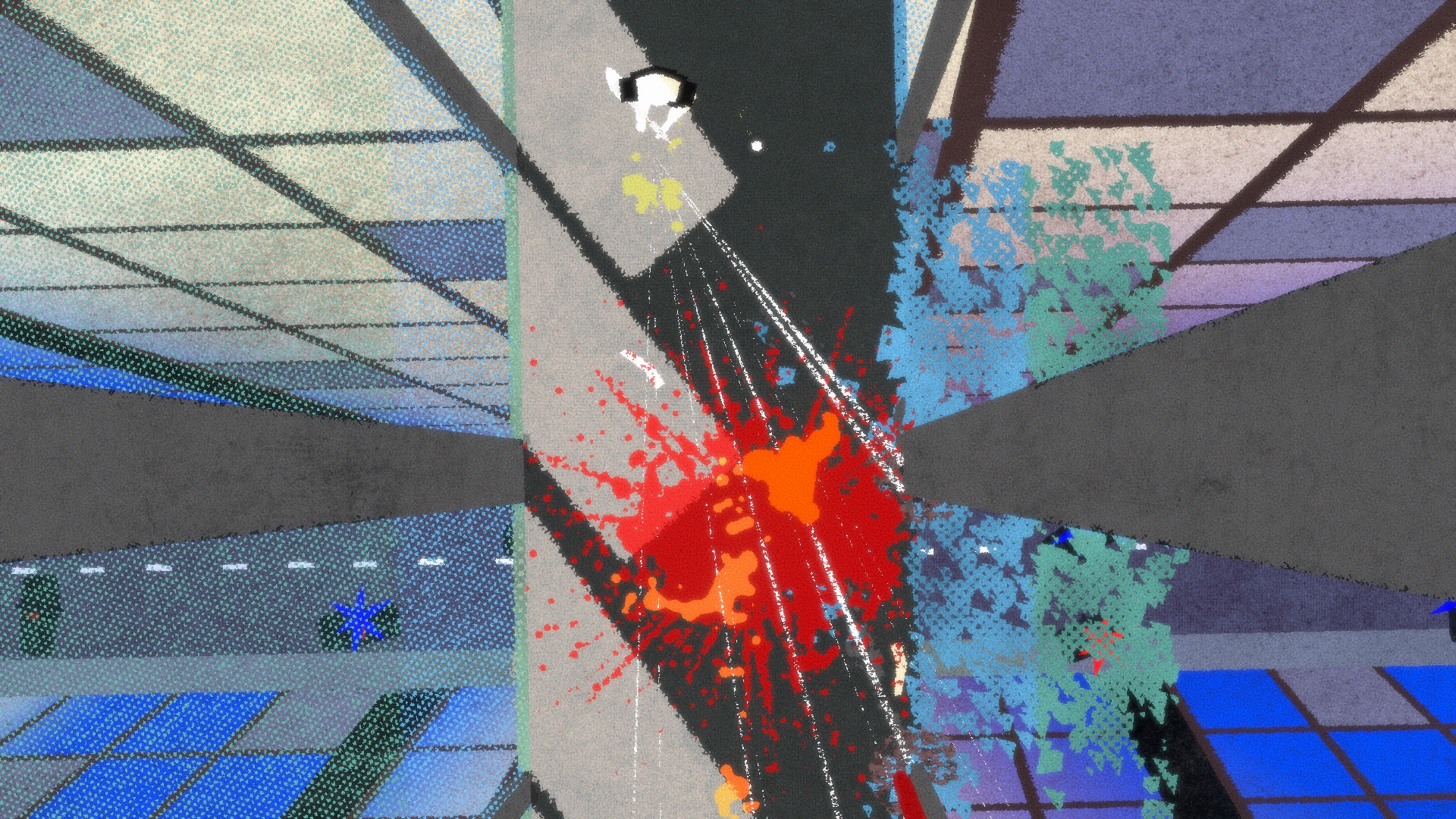 There are various enemies, environments and occasional quirks that spice things up, but this simple concept would not lend itself well to a bloated lengthy campaign. The game can be finished as quickly as in two to three hours, but it felt just right. As if it wasn’t challenging enough in the first place, you can replay these chapters in the harder mode, or try to finish a chapter without dying to shine on the leaderboard, all of this will more than triple your time spent on the game as you hunt down all those challenging achievements. A lot more enemies spawn, and you can forget about being a pacifist. Actually, it even started to become too much: too many enemies and the last chapters do not provide a lot of cover. Last but not least, finishing the campaign unlocks a bonus chapter named “Single” that tasks you to break in to save a pup in a well-defended building, then return all the way back to freedom. I used a trail of my own blood to see which rooms I had previously cleared, but there were still these damn elevators constantly spitting new squads. Once I finally managed to do it, I was ecstatic. 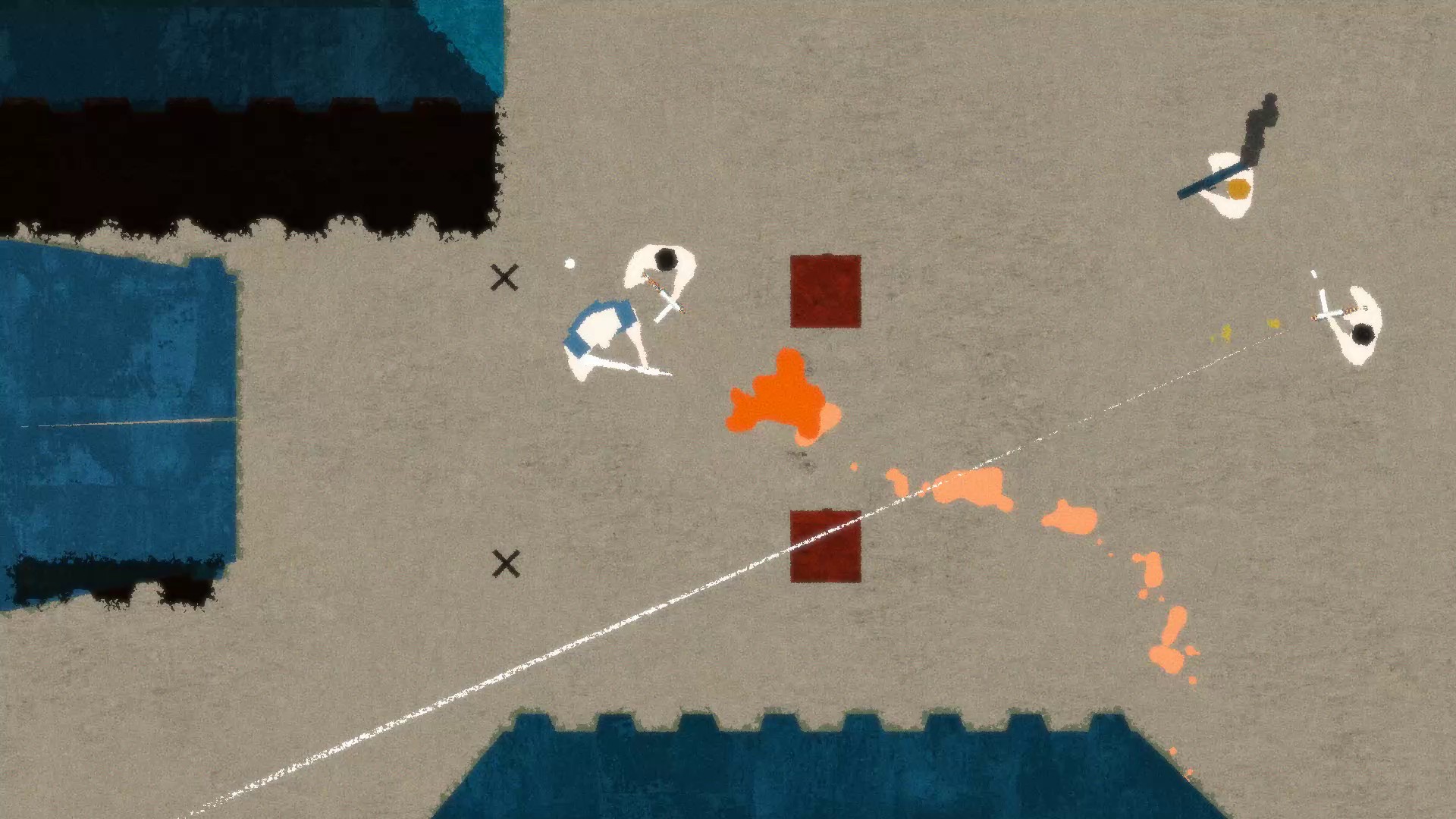 Ape Out is a game of primal and frantic violence, and yet it delivers smooth and fast game mechanics based on grabbing enemies to use them against their own ranks of degenerate humans. Simple, short but very effective. It’s a treat for your eyes, your ears, and your twitch-fingers as you reach a delightful state of flow: yeah, it’s sort of like Hotline Miami as a gorilla. Nonetheless, it feels different enough to warrant that you purchase this game for a short burst of inebriated fun, and perhaps stay longer to face an increasingly difficult challenge.