Escape the horror of Raccoon city through the police station and it’s sewers and uncover what happened at the secret underground laboratory while trying to find your way out of the city. Ah, Resident Evil 2 I missed you.

I spent hours with the original Resident Evil 2, and it’s sequel Resident Evil 3: Nemesis. Though, I never really considered them “Horror” per se as they never made me scared or stressed out. Silent Hill 1 and 2 instead gave me that uncomfortable uneasy feeling while playing, especially at the Midwich Elementary school in the first game. Dear God, we almost didn’t sleep at all that night with my friend over at my house.

To me, the Resident Evil games were always just fun. I enjoyed my time with them but in my mind, I labeled them “casual action”, and didn’t understand how zombies could be scary. They don’t have the psychological aspect that Silent Hill and its monsters had.

Resident Evil 7 made me distressed at times (I can immerse myself in games pretty well), but will this remake do the same or does the original Resident Evil 2 forever remain as that casual and fun action game I remember so fondly?

As I finally reached the Raccoon City Police Department (It really isn’t that far in the game, it just felt like forever the first time because I really wanted to get there) and started to explore it, I couldn’t help but adore the capabilities of the RE engine. The game looks beautiful and runs smoothly most of the time, I’ve encountered minor fps drops on the 4th survivor mode but nothing more than a minor nuisance.

Zombies are quite detailed. Licker, that classic monster from the original, looks meaner than ever now and moves smoothly along the walls and ceiling. What a nightmare to encounter in a narrow hallway. Light coming through the cracks of boarded windows and dimly lit hallways imposed a sense of uneasiness in me that the original never could.

The most interesting place for me was this museum that was turned into a police station, and I liked exploring all the rooms it offered. Unfortunately, the sewers and laboratory were a bit of a let down for me. They were realistic in the sense that they were just hallways and corridors, but they lacked the same feeling of helplessness and mystery that the RCPD gave me. I wasn’t a fan of them in the original either. It’s just a personal preference, they weren’t any different in quality, enemy placement, or challenge.

I watched a gameplay from Youtube of the original to refresh my memory and it was pretty much like a I remembered. There weren’t many dark hallways and every room had good lighting and nothing really looked scary to me. I understand the graphical limitations back in the day, and I don’t mean that exactly. The setting itself didn’t look scary or oppressive to me back then. While playing this Remake, I was on the edge of my se… sofa pretty much the whole time on the first playthrough, carefully checking around corners and taking my time, my finger on the trigger.

The puzzles, if they can be called that, are the same as they always have been in Resident Evil games. All of the crucial items are clearly visible to the player and very hard to miss. It made me wonder why on earth would there be a valve handle on the desk of a random policeman but what luck that there was, since one pipe upstairs was letting off steam and, you guessed it, there was a slot for the valve handle.

There’s only one task at the end of the game that I would call a puzzle. It consisted of mixing the right amount of liquid substance by transferring the liquid between three different sized tubes. But then again, it’s pretty clear that Resident Evil isn’t a puzzle game, and it never was.

The tank controls were gone, and the automatic aim was gone. I had to aim this time, by MYSELF, and try to hit a zombie which was wobbling to the left and right in the middle of a dark hallway infested with zombies, knowing that if I don’t score that hit soon to stun him, I’m dead. My girlfriend was petting our dog and screaming next to me to shoot that zombie, other ones are coming from behind! She can’t take the pressure, she’s not really a fan of horror games. 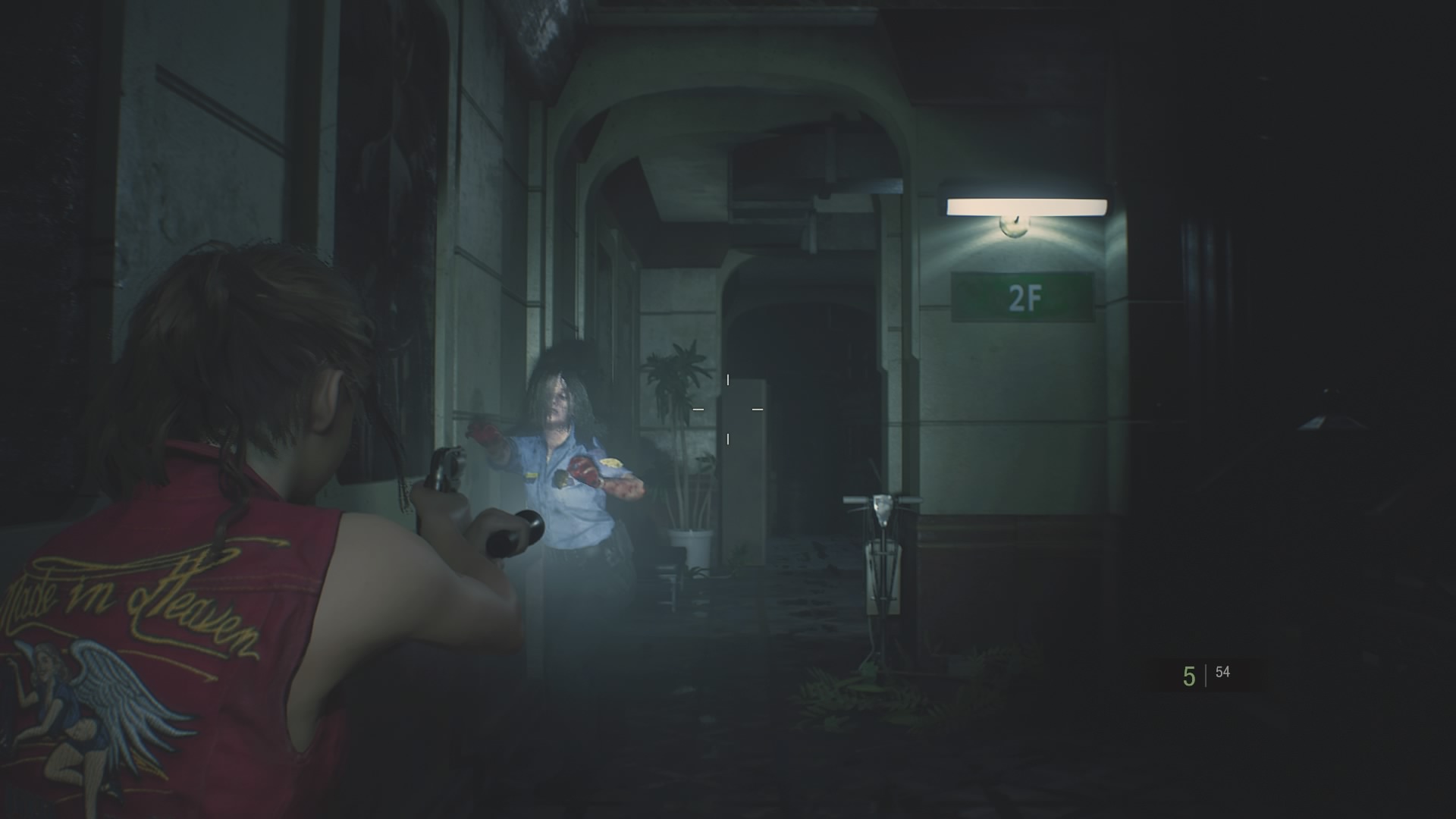 I couldn’t remember any moments like this in the original game. Back then I just shot without thinking too much or dodged the zombies by abusing the clunky animations/tank controls. Here they move differently, some much faster, some much slower. Lickers, jumping from the floor to the ceiling or lunging at me and dealing huge damage, were a serious threat now. Those were things that I wished I wouldn’t encounter at all after the first one.

When I eventually did meet more of them, I had to seriously consider if I should waste precious ammo on them, or try to sneak past them. If I decided to sneak, I had to be sure I wouldn’t hurry back to the same room/hallway anymore since they hunt by sound. Unlike in the original, they are now nearly impossible to dodge while running.

Thankfully, enemies other than regular zombies are used sparingly. It is just the right amount to keep the player guessing when another one comes, but not too much so that it would start to feel like a chore. I also liked the fact that I could board up windows to stop the zombies from getting in the station. This saved a lot of ammo since there is quite an amount of backtracking through the same hallways. Without the windows being boarded up, zombies will simply keep pouring in.

There are two things I miss in regard to the combat in this game. Firstly, some kind of damage indicator: a few times during boss fights I found myself wondering if I even damage them. Most bosses have specific weak points (being a Japanese game, it’s usually a massive eye or two around the body) where they stagger a bit when shot. Hitting other places didn’t even make the bosses blink unless shot multiple times. Being mostly a computer gamer, I really suck in aiming with the controller. I had a really hard time with some of the bosses until I googled do they take damage in other places. It’s the same with every other Resident Evil, I know, but I still always thought suspectingly, “Is this boss immune to damage, or do I have to do something else?”

The other one is a proper dodge. There is a possibility to dodge if I was carrying a knife or grenades. I could hit a Zombie that grabbed me with the knife or shove a grenade into his/her mouth, which is funny to see, but it is a total waste of a really precious resource. There were times when a I was running down a hallway with Mr.X behind me and trying to avoid zombies, I didn’t have time to shoot and the hallway was too narrow to circle the zombie. I usually just took some damage those times instead of wasting my knife or a grenade. Dark Souls-type of dodging, of course, wouldn’t work in this game, but I’m sure a trained police officer knows how to push a dude away. They might not always succeed, but sometimes is better than nothing.

There has been some free dlc added to the game. It is advertised as telling the story of the other survivors. I was personally waiting for some interesting short story episodes. Instead, what I got was a 4th survivor type of time trial where I had to run past the familiar areas filled with monsters. Those of you who don’t know the 4th Survivor, it is a time attack type of mode that takes about 10 minutes to complete.

It’s complete trial-and-error. Just learn where to monsters are, use the right weapon or run past. It’s a shame since I’d would have liked to experience properly what happened to the gun shop owner and his daughter, discovering what they endured together. They are met with briefly during the main campaign and I felt they were quite interesting. It can really be an emotional and engaging storyline.

Since they all take about the same amount of time to complete as the 4th survivor does, pricing it more than a couple of euros for this one would have been a bad move from the developers, especially because the way it was advertised gave me the impression it was going to be a story dlc. 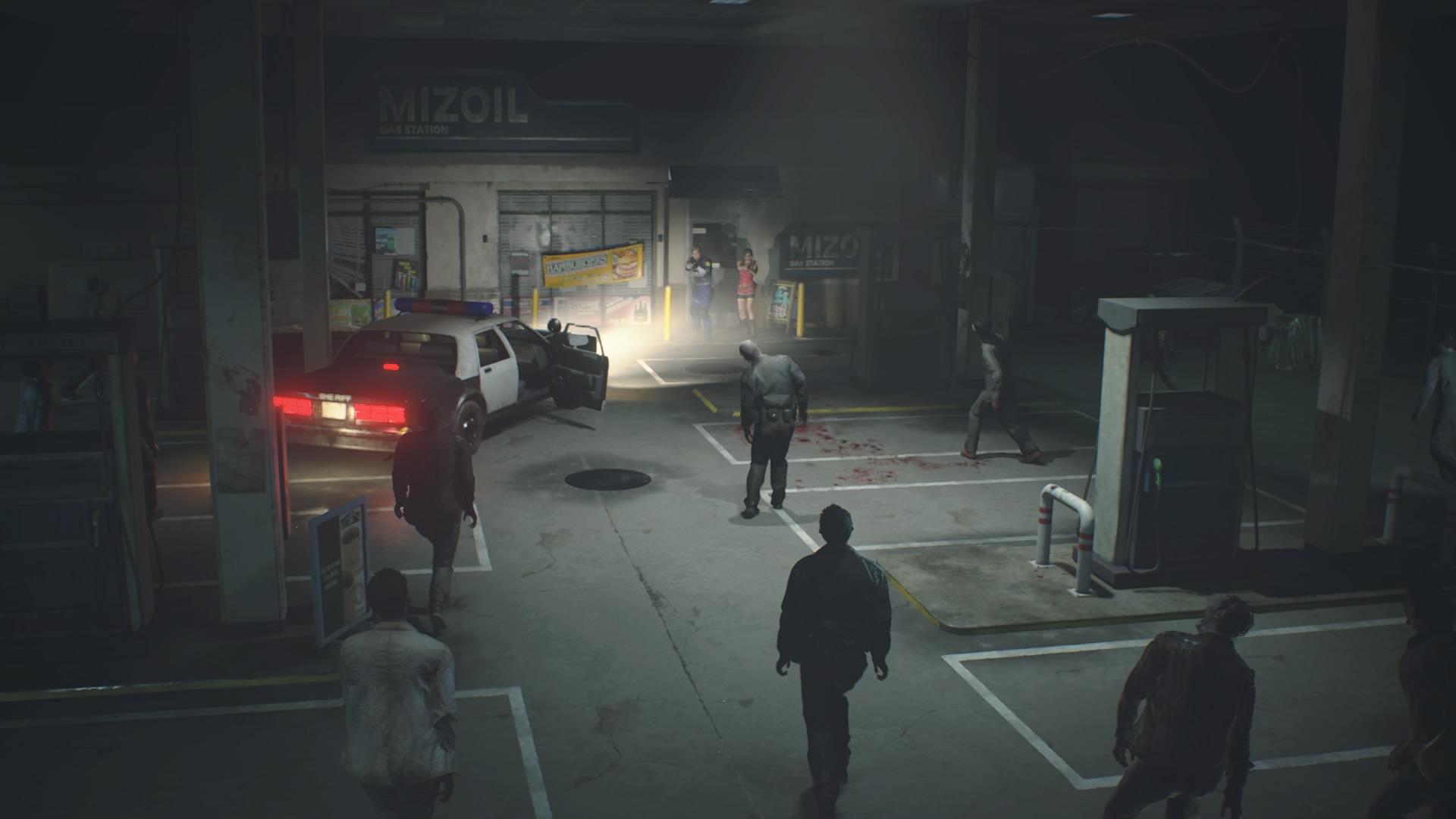 The new Resident Evil 2 remake is a great game. Even though I personally didn’t care much for the sewers or the laboratory, the other half of the game, it doesn’t mean they felt somehow out of place. It all fit perfectly in the story and setting. Expect a tight 5-7 hour campaign on the first run. It doesn’t feel too long or too hard. You’ll encounter interesting characters, juggle some light resource management, and graphics provide plenty of eye candy. It’s a pretty near perfect game in its genre. Everything just works.

The only thing that I didn’t like was the time attack mode. At least for me, it was a complete nightmare on a controller, especially the moments near the end where the most powerful monsters are coming. But those additional scenarios are free and getting quality content is always welcome as they do offer a lot to play with for the competitive players.

I’d say this is a must-have in every gamer’s collection. Grab it! It’s a very well rounded Save from me.