Despite the psychedelic colors and meditative appeal, Fugl falters where it should soar.

Fugl is an Early Access voxel-based infinite-flyer. I love voxels, the Pointillism of the graphics world, and I love games that are more about chasing experiences than chasing points, so Fugl sounded like a perfect fit. To call it a game might be missing the point, as it’s more of an interactive sandbox with flying as its focus. Fugl puts you behind the wings of a vast array of lofty creatures as you pilot them around a procedurally generated infinite landscape, with no goals or pressure other than to experience the freedom of flying. Taking full advantage of voxel generated graphics, the landscapes themselves are a wondrous mixture of flora and fauna, and flying near another animal will suddenly cause your avatar to morph into whatever you cross paths with, whether it’s another bird, such as a hawk, or something less aerodynamic like a reindeer.

While the visuals of Fugl are amazingly tranquil and hypnotic, actually playing it is far less relaxing. Contending with awkward controls, questionable flying dynamics, overzealous collision detection, and deceptively small maps may leave you more frustrated than meditative. [Updated version: see below for details!] 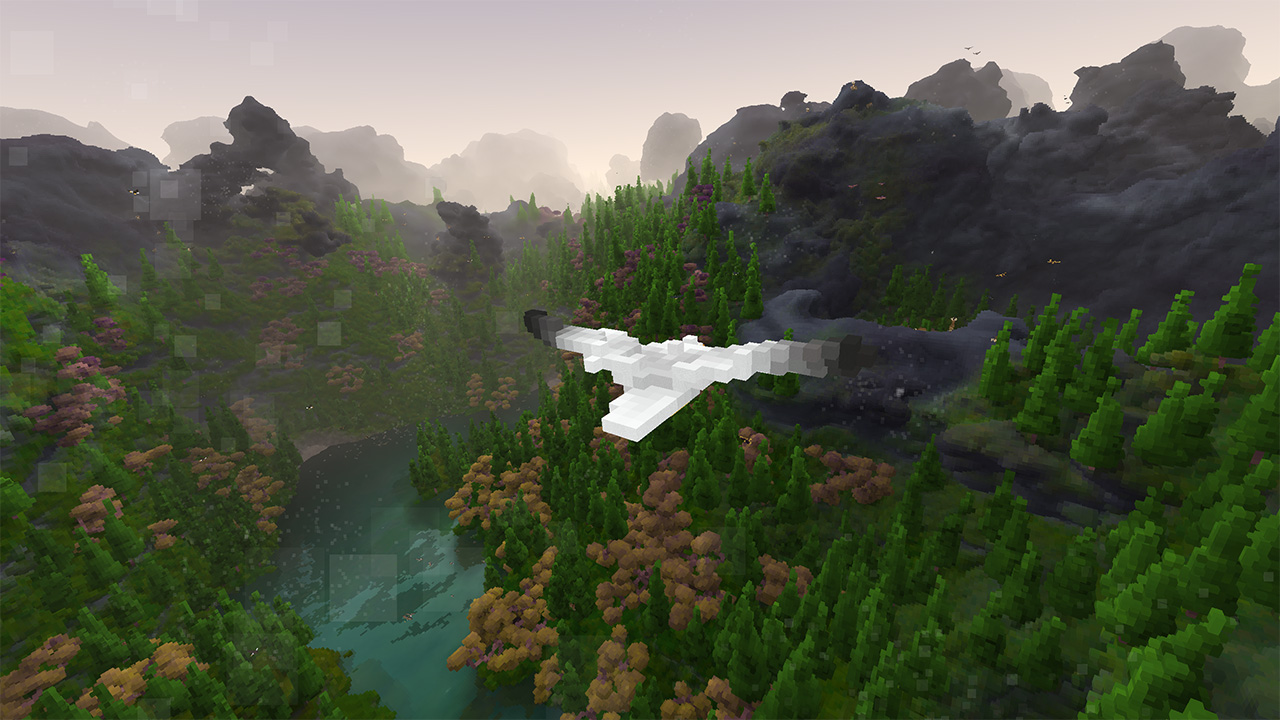 On Wings of Voxels

After installing the game I was immediately lured in by the title screen, with its infinite flyover of a candy-colored landscape. This experience called for the full-screen treatment, so I opted to play it through a TV via a controller. The game holds up beautifully in 4K and runs flawlessly, so I expected the movement to be as fluid as the visuals. After going through a very brief flight tutorial, I took the reins and decided to explore the infinite landscape before me. But as I soared, I felt I was fighting the controls to get the precision, sensitivity and responsiveness that matched the otherwise silky-smooth visuals. Even after fiddling with the settings, I wasn’t happy with the controller, but thankfully the game also supports keyboard or mouse, so I decided to try them as alternatives. Using the keyboard felt immediately better, and was easier and more precise. I eventually settled on the mouse, though, as that offered a good in-between approach of the fluidity of an analog stick with the precision of a keypress. That’s just my own experience with the game, and other players have noted the opposite, so perhaps some of that comes down to personal preference. 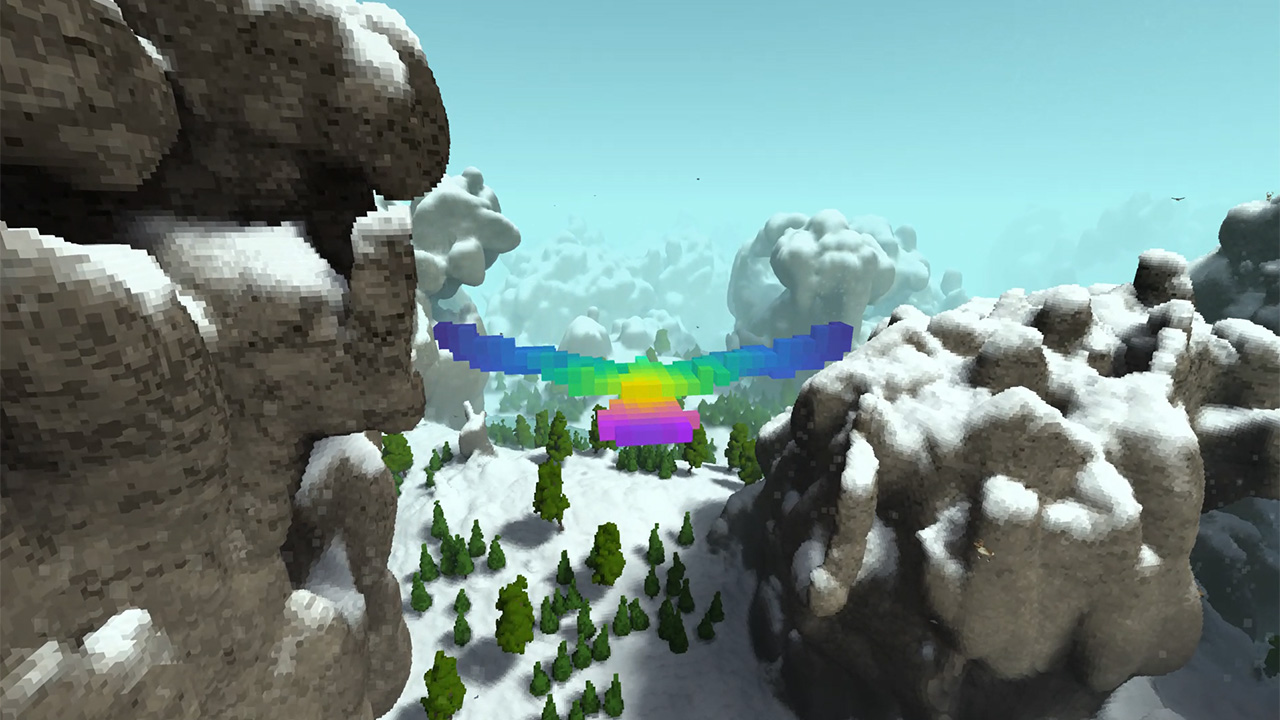 Still, even after finding a comfortable way to control the game, the flying dynamics never quite felt convincing. I can’t speak from experience, not being a pilot or a bird, but the avatar you control, whether it is a flapping flamingo or cloud-bound kangaroo, doesn’t seem to respond to wind, lift, drag or other dynamics, and makes the experience of flying in Fugl, though pleasant, feel very “video-gamey”. I don’t know how else to describe it; it’s fine for what it is, but it’s definitely not intended to be a flight sim. While I didn’t expect, nor demand, it to be a flight sim, part of the promise was to experience the thrill of flying, and in Fugl I often-times felt more like a kite attached to some voxel string, as I darted and dashed about with all the grace of an airborne pinball. After a while you do get used to the dynamics, but they never feel completely convincing or thrilling. It’s like watching a movie that has elaborately over-done special effects; you can’t help but admire it all, but even in context of the story you still know it’s all just fake. 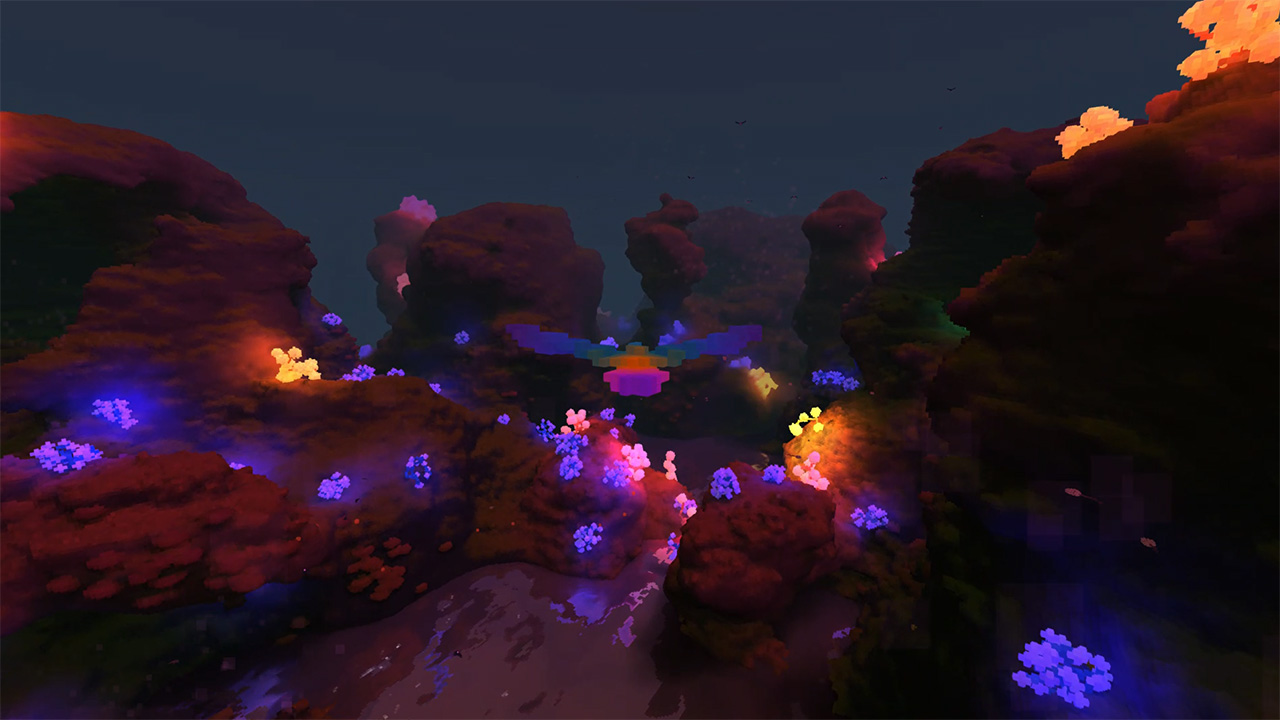 So, as you’re fake-flying your way through the mist-shrouded infinity sprawling out before you, you may be hit with one more snag; quite literally. The collision detection of Fugl feels mercilessly unforgiving, resulting in more time spent unintentionally crashing your flying goat than time spent in the air. It’s all too easy to get caught on the ground or cliff walls, but the most egregious offenders are the flora coating the procedurally generated geography.

To be fair, I don’t anticipate being able to fly straight through solid trees, but in most games, things like leaves, twigs, and even branches, aren’t calculated as a hard collisions. And even if you want to make the argument that grazing a dead leaf while flying truly would send you hurtling to the ground, keep in mind the limitations of the voxel. Though it has many benefits, because resolution is limited, that previous example of a leaf in Fugl is rendered the same size as a small boulder. These lands look great from a distance, but become a jagged deathtrap as you get closer. And once you crash (which you will do often) taking off again frequently results in getting snagged on a nearby bush, blade of grass, or dust mote, thus sending you tumbling down again. It’s not uncommon to get so tangled while bouncing around the cubescape that your avatar becomes hopeless stuck in some voxel-clipped limbo. The devs provide a dedicated key to reset your avatar when this happens, but the fact that this command even exists in the first place is telling. 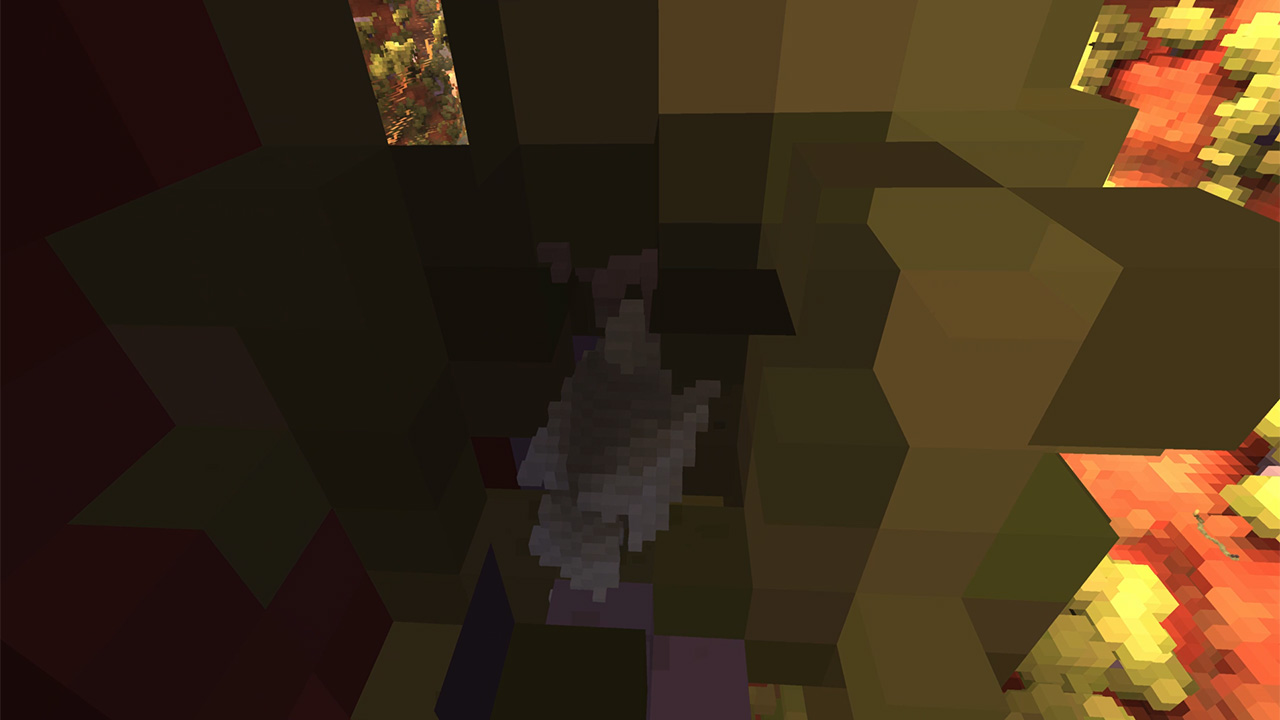 Looking past the controls, flying, and collisions, at least the hint of a vast procedural landscape promises to be the crowning feather in Fugl’s cap. And while the procedurally generated landscapes are quite cool, they’re surprisingly small. The maps are tileable, so essentially it’s just the same layout repeating endlessly. This would be fine, but each map isn’t very big, and the result makes most of your flying time feel cramped. There are no vast canyons to fly among, or imposing lakes to soar over; it’s more like flying through a miniature diorama that’s trying very hard to symbolically represent the vastness of wide canyons and glistening lakes.

On the flip side, some of these limitations are offset by the wide amount of content and customization at your wingtips. Fugl comes with an array of built-in maps, each with their own unique visual style and mood, from braving frozen icebergs, to gliding over infinite sand dunes, and even alien and dream-like flights of fancy. You have to exit to the start screen to switch among the maps, which is a shame, as it would be more interesting to do that as part of the game, like via a portal, which would also help to give the game a much larger feeling than its one-at-a-time tiling map currently allows. 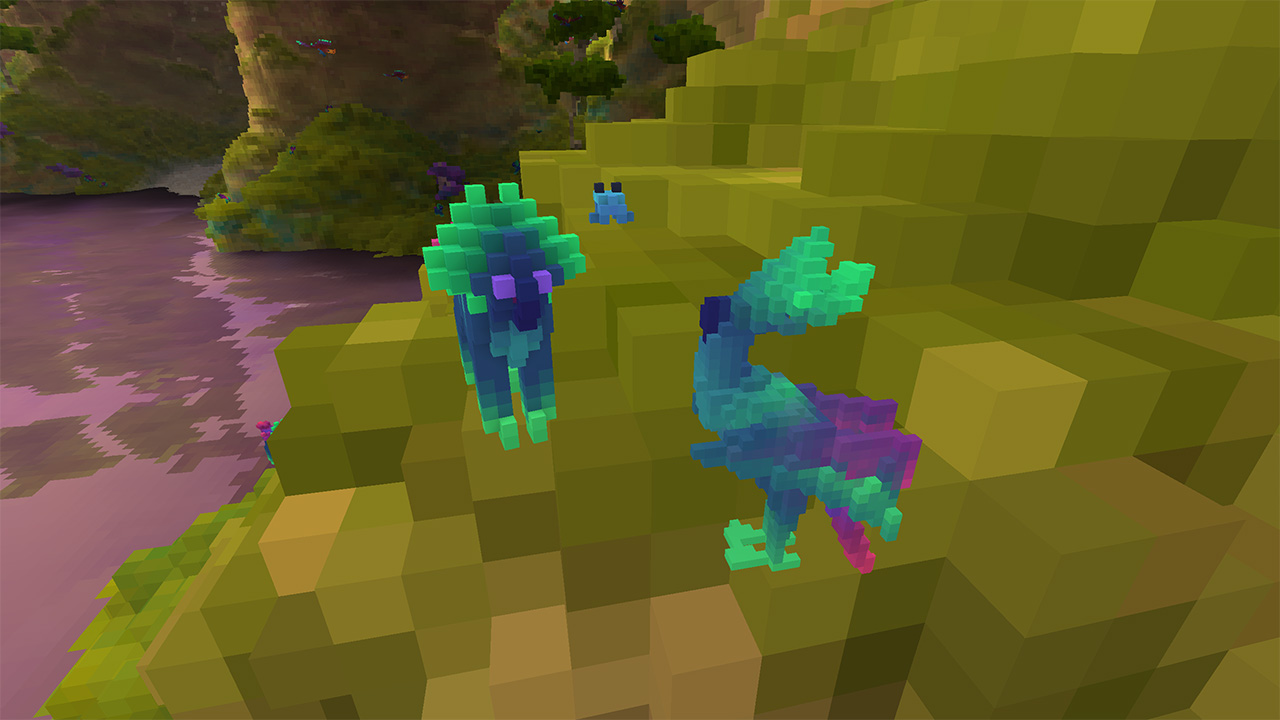 One of the other features of Fugl is the ability to fly as any creature you come into contact with (another benefit of voxels is this endless ability to morph into anything), and there are a surprising number of creatures to discover and interact with across the Fugl-verse. On top of that, the game comes with a character editor that has an unexpectedly deep level of options to control how your avatar looks and is animated. To be honest, I may have had more fun playing with the character editor than I did with the game itself. No doubt one of the greatest pleasures of Fugl is watching the animals as they flap hypnotically in their voxel-Impressionistic way, so being able to control all the minutia of this on a virtual turntable for each animal in the game is mesmerizingly satisfying, even if these creative acts don’t change the base game in any meaningful way. 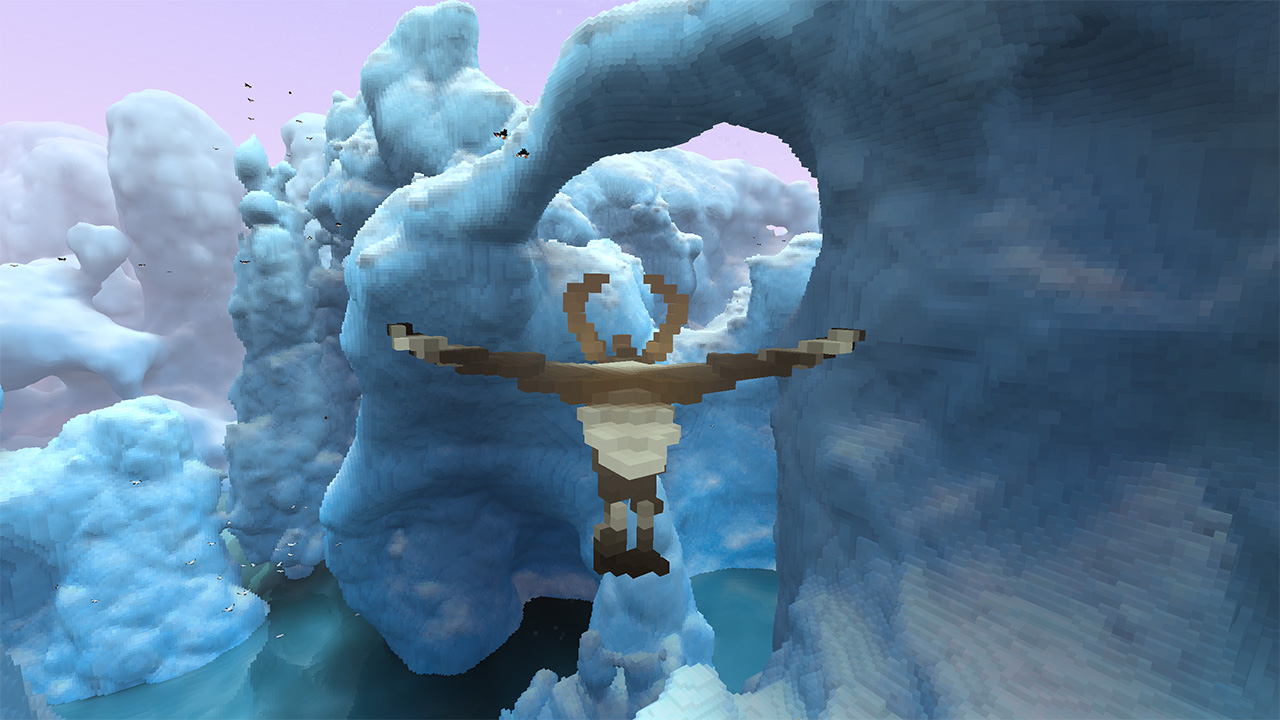 Fugl still looks and feels very much a work in progress, but I have no doubt that a lot of these criticisms will be addressed as development continues. And developers Team Fugl do earn high marks for their dedication, as new features are continually being implemented and refined.

The latest addition is underwater exploration. In theory this allows you to aim for any body of water and dive below it, swim about for a bit, then leap out and soar again unto the clouds. This is a very cool and welcome feature, and no doubt it will be perfected and better implemented, but currently it’s a bit clunky and limited. The actual mechanics of entering and exiting water aren’t as seamless as their sample videos lead you to believe. As a bird you can’t move as a fast, but as a fish you can swim with great ease, so to get the most out of each dive, you have to fly near enough to a fish to transform into one, and then the same in reverse. It’s usually easy enough to run across flocks of other animals, but every once in a while as you’re ramping up for a dramatic exit from a lake, you have to suffer the indignity of hitting a nearby rock and floundering about a bit on dry land before mimicking a passing seagull and once again taking to the skies. And when you are underwater, there’s not much to do, as most lakes and waterways are just very shallow versions of the hills above. So once you enter a body of water, you’re kind of trapped in a constricted aquarium, which is pleasant for a bit, but just like with flying, leaves you yearning for vaster seascapes within which to swim. 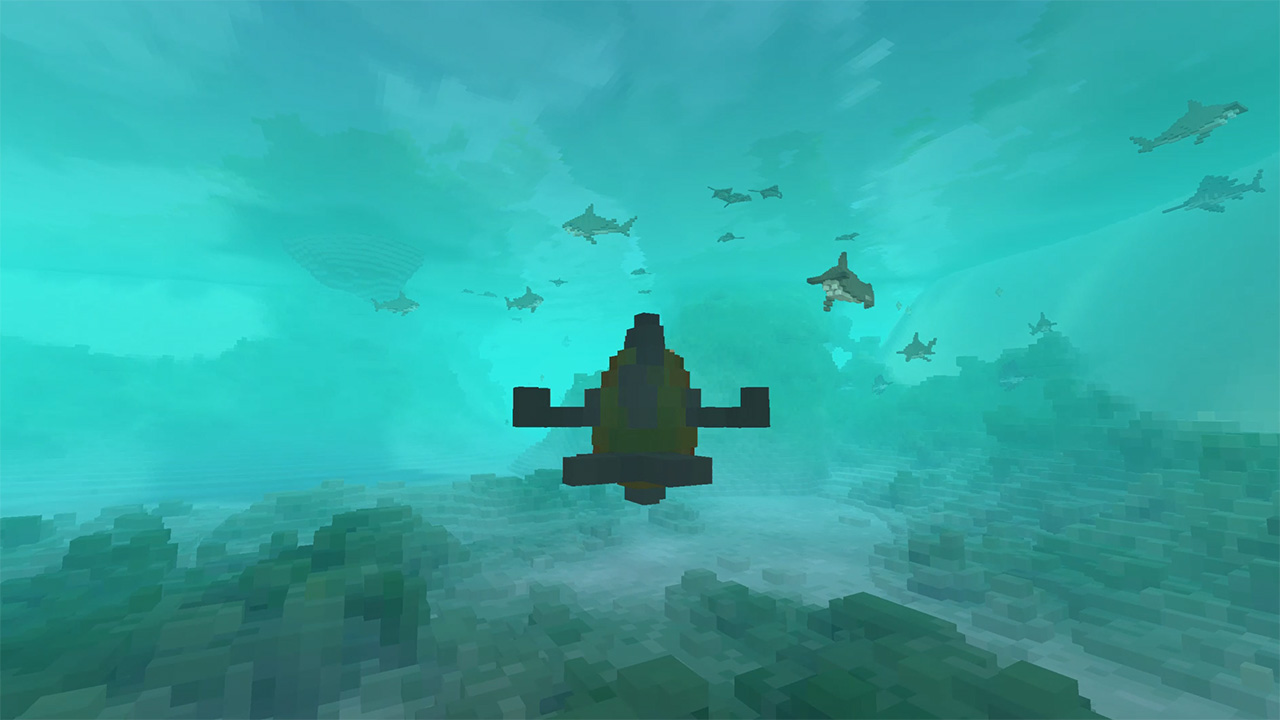 Fugl is primarily a visual experience, even though there is audio in the game, it’s so minimal and repetitive that it just becomes random background noise and doesn’t genuinely contribute to any sense of immersion. What’s there is fine, but it does stand out as a lost opportunity to create a dynamic virtual world to explore sonically. The title screen has a pleasantly-relaxing enough song, but that fades once you enter the world and are left with odd bits and pieces of music that cut in and out, accompanied by the random sound-effect roulette echoing off canyon walls and up from forest floors. None of it fades or mixes gracefully, and when the audio is present it’s a bit jarring and can easily break whatever illusions of flying Fugl briefly attains. 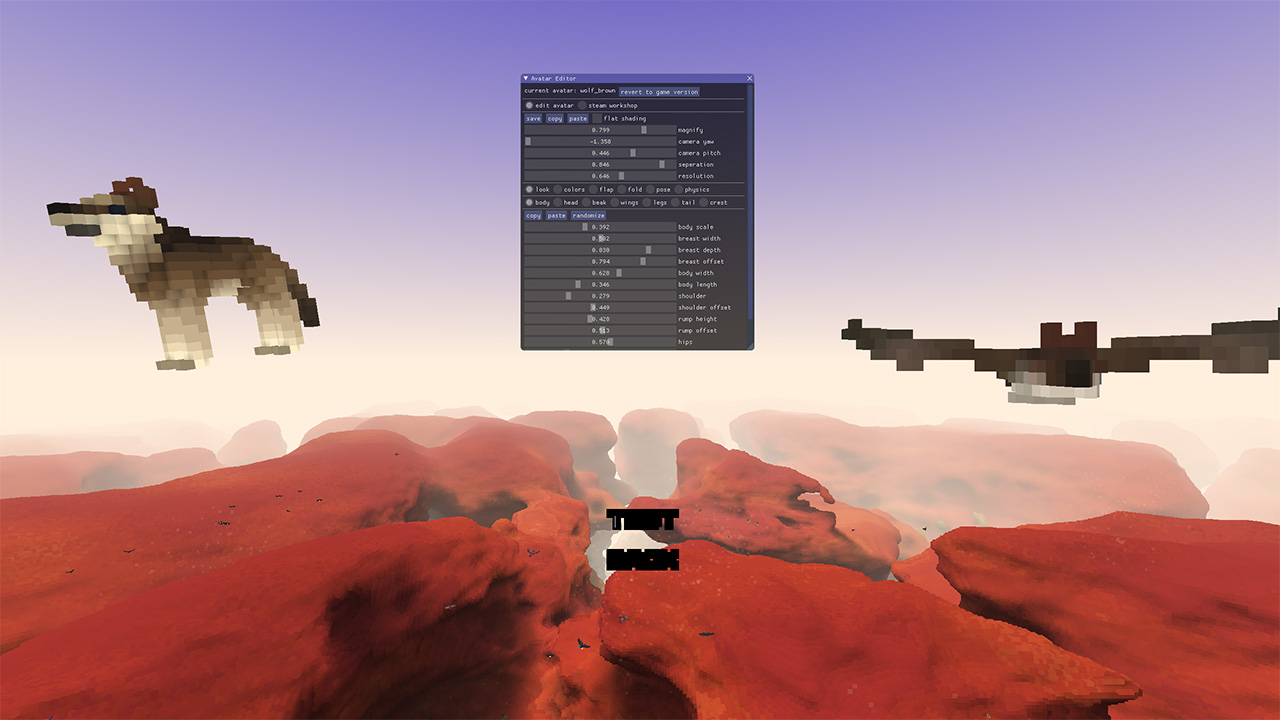 Still, for all it’s flaws, the look of the game is truly luscious and is deserving of praise. Some of the landscapes are shroud-encrusted versions of our own, while others push the imagination and are like flying through the title sequence of Enter the Void. But each is a unique immersive experience, a true showcase of when technology can become art. There is a certain sensory quality that voxels convey which differs from their more-polygonal-based brethren, and that is a sense of dream-like fluidity. Shapes, objects and movement blend together in a way that feels more solid and realistic, but still hazy and amorphous at the same time. This lends itself well to the game’s more surreal moments, and makes transforming yourself into a flying panda bear somehow oddly believable. The lighting and color schemes contribute to this feeling as well, which gives Fugl a mood and essence that is entirely its own among flying games. It’s a truly lovely world to inhabit, even if the game itself is a bit uninhabitable.

As a testament to the active development of Fugl by its dedicated devs, they’ve released an update which addresses some of the concerns I had during my initial play through of the game. Along with general stability improvements, they have greatly fixed the controls of the avatar. So much so, that I no longer feel it limits the game’s playability. Make no mistake, it’s still not a flight sim, but at least now controlling your flying Sasquatch feels fluid, natural and fun. In addition to the controls, the audio has also been greatly enhanced. The sounds effects blend into the game better, and there are musical interludes that fade in and out gracefully as you drift between mountain tops.

The develoers at Team Fugl certainly seem busy, so it will be interesting to see what they have up their sleeve for future releases!