Spinnortality places you at the head of a global corporation fighting for political and financial supremacy in a world of genetic engineering, advanced AI, invasive transparency, and social automation, armed only with a few good slogans and a fistful of bribes.

Although this cyberpunk management strategy game is set in the future, the parallels to our own world are undeniable: find a way to get people to buy things they don’t need and raze the world along the way. The only limit is that you have to profit before you die, or more specifically, before you have a chance to grow a new body and transfer your mind into it, becoming an immortal CEO. Thus you can outlive political parties, rival companies, and even entire nations in your quest to spin wholesale cynicism into capitalistic gold. 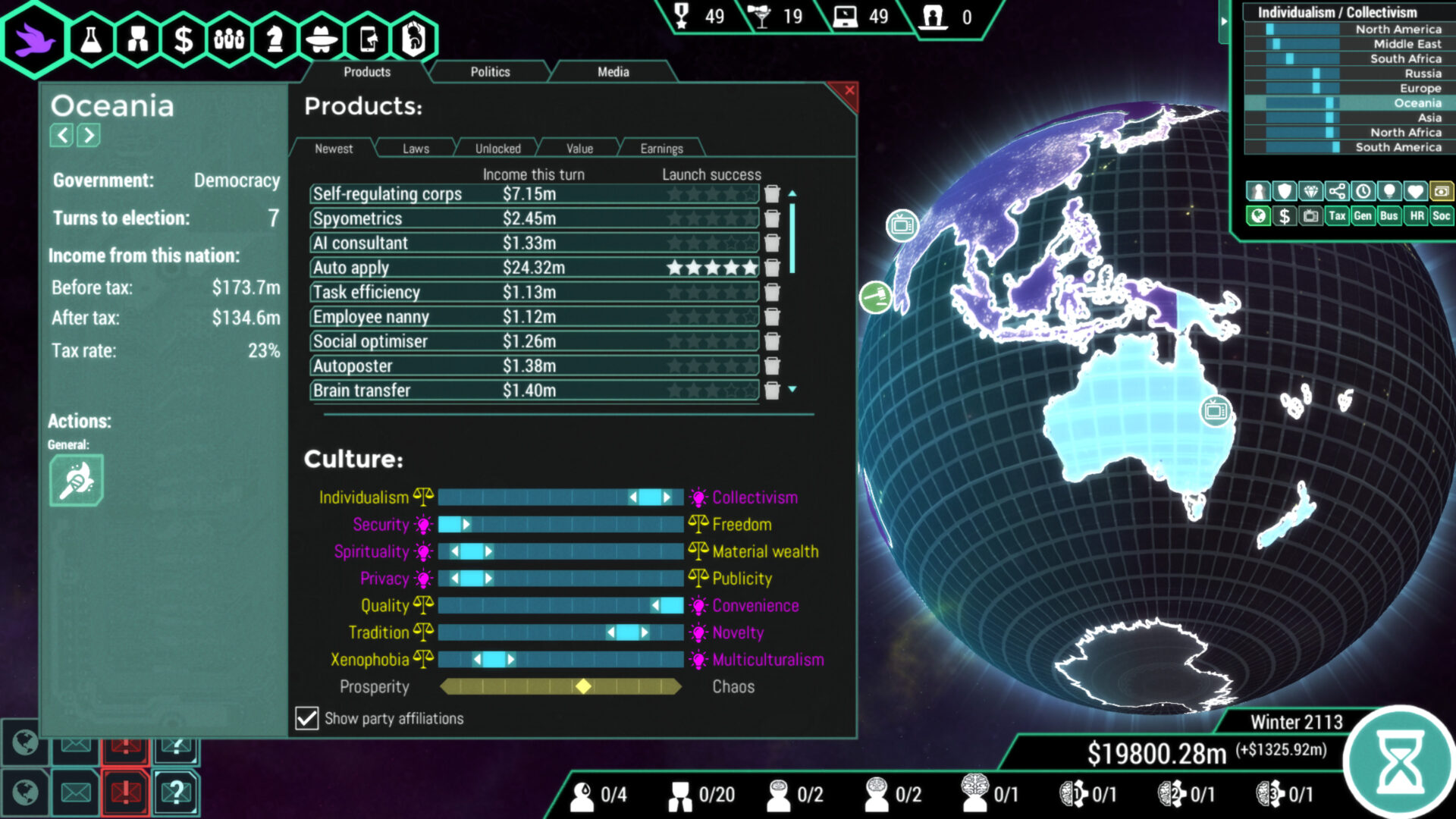 Morality is fluid, as long as it sells

The main way of progressing is by researching new technologies, such as designer organs, employer mandated retinal spycams, and AI therapists, and then finding ways to market these as products to customers around the globe. Each nation has its own political system and distinct stance on a wide variety of issues, like collectivism, spirituality, xenophobia or multiculturalism. The trick is, many of the products you create go against what they believe in, so you have to figure out a way to spin your marketing to convince the masses to buy into products and services that they’ll probably regret later.

You have various weapons in your corporate armory to assist in this commercial conquest. Market research can be performed to help you find the right angles to take when launching a product in each nation, and to determine how likely it is to succeed; nothing is ever a guaranteed hit so you need all the help you can get. You can bribe political parties to pass laws in your favor, or support their rivals which can eventually lead to a governmental overthrow. You can invest in a media presence within each country, publish fake news, hack your opponents, engage in espionage, foment rebellion, or outright take over a country and become a “corpornation”. All the while you have to fend off competing companies, and something even more nefarious: the court of public opinion. 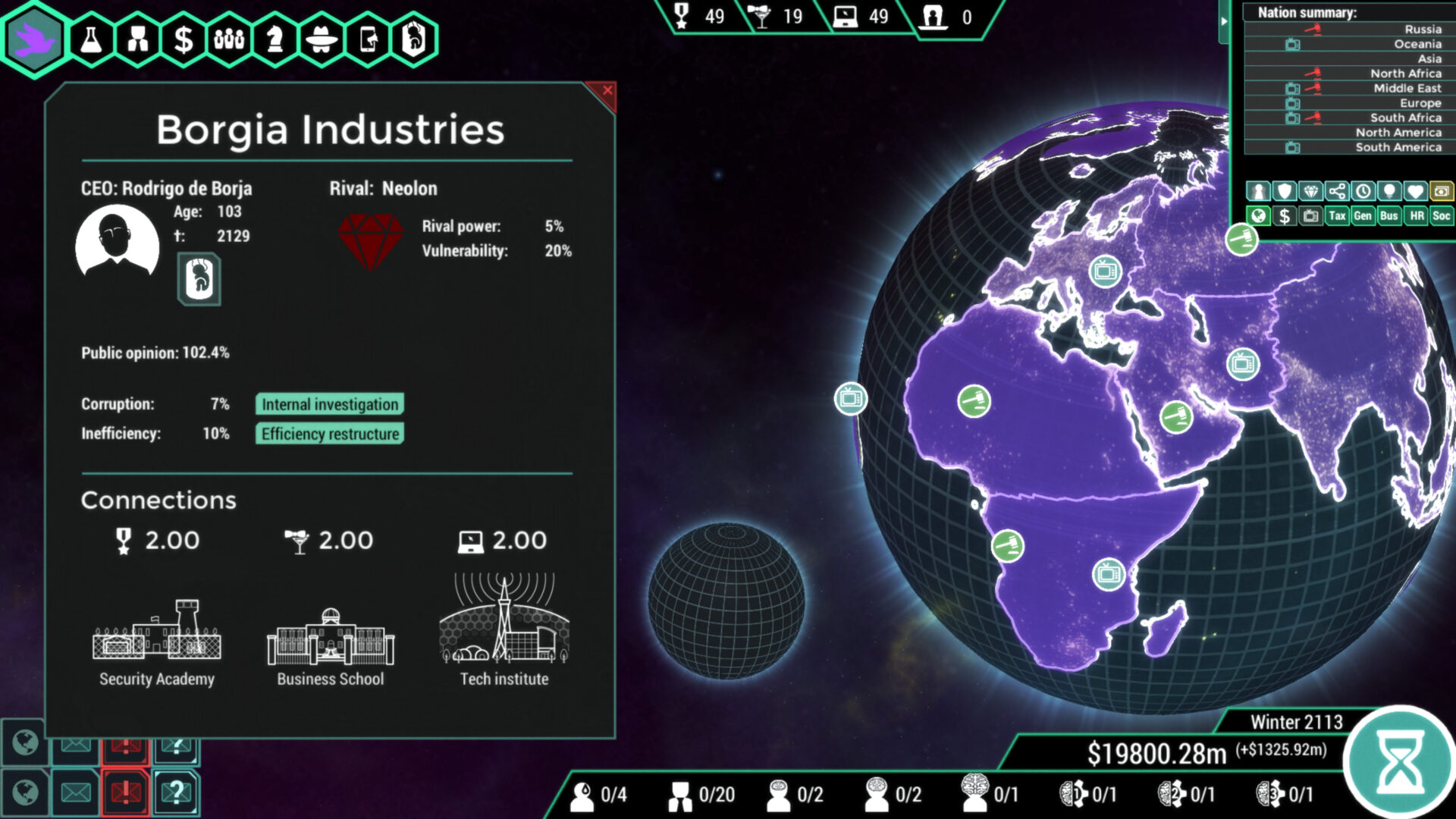 The gears in your megalomaniacal machine are, of course, the workers. You have several skill levels to hire from, but the higher the quality, the more it will take from your bottom line. And not all are human; you can develop genetically enhanced humans, sentient AI, and even moon mutants. And since these groups are bound to get along like oil and salt and vinegar, it’s also your job to keep morale up, otherwise inefficiency and corruption may rise.

Even though you are their benevolent autocrat, you too are just a puppet. It’s the Board of Directors who are truly pulling the strings, and not only do you have to keep them happy, you also have to keep them alive, literally. Like you, they are dying and need a constant supply of fresh bodies to prolong their material existence in a very material world.

Random world events are frequently lobbed at you to hinder your progress and profits, everything from consumer backlash to corporate scandals and global plagues. The future, it seems, is a dangerous place, even if it all sounds so uncomfortably familiar. 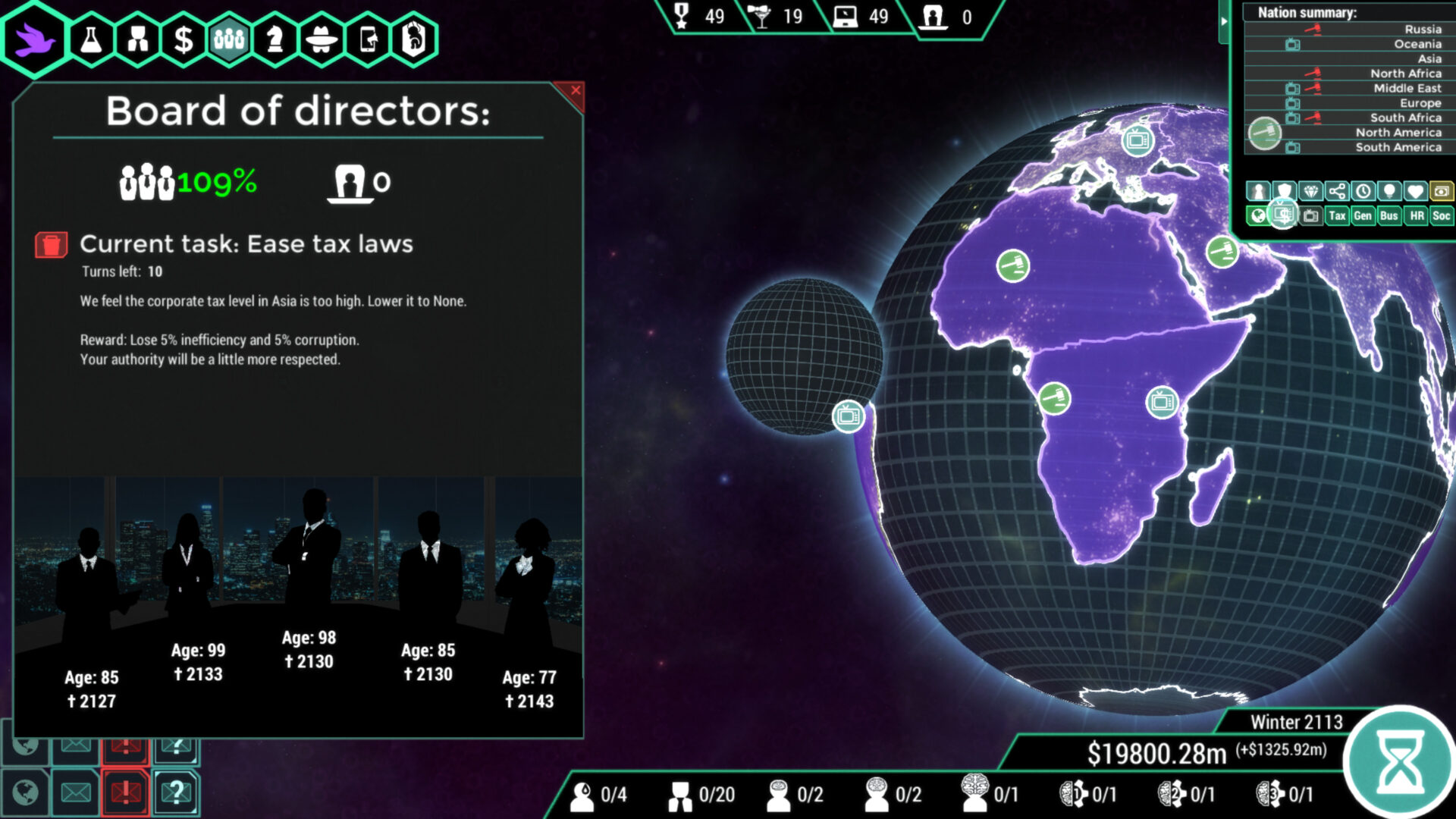 Mortality is endless, as long as you pay

The gameplay itself is turn-based, and in each round you can perform a variety of actions such as hire or fire staff, assign workers to research new products along a branching tech tree, launch marketing campaigns, engage in political activity, and so on. Most of this is done via little email alerts that offer you multiple choices as to how you want to respond, with each response costing you money or resources. 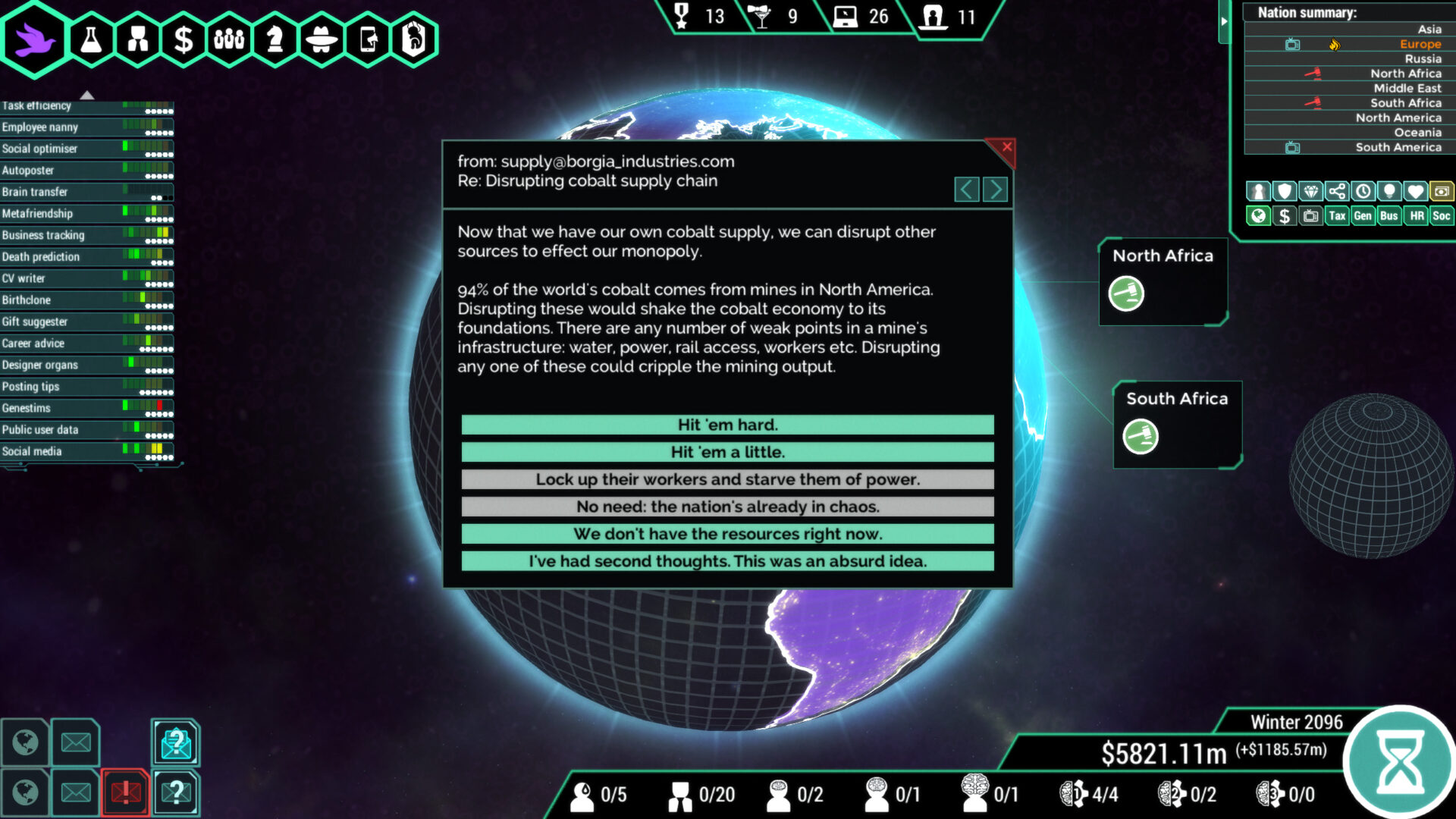 Some of my favorite instances of the products and technology you can launch in this game use cruel irony to convince consumers to invest in a product that goes against their own best interests. For example, you might be able to sell AI technology to a wary nation by appealing to their self-entitled penchant for Convenience, beginning with a simple resume writing program because they were too lazy to write their own, only to end up with an automated AI workforce that will displace all the workers anyway.

Ethics are another murky area; as previously mentioned, you need new bodies to continue existing, and you can choose to either grow them in tubes, or raise them as conscious humans, keeping them prisoner until you need them, then wiping their memories and taking their body; and much like in real life, each option has its pros and cons. 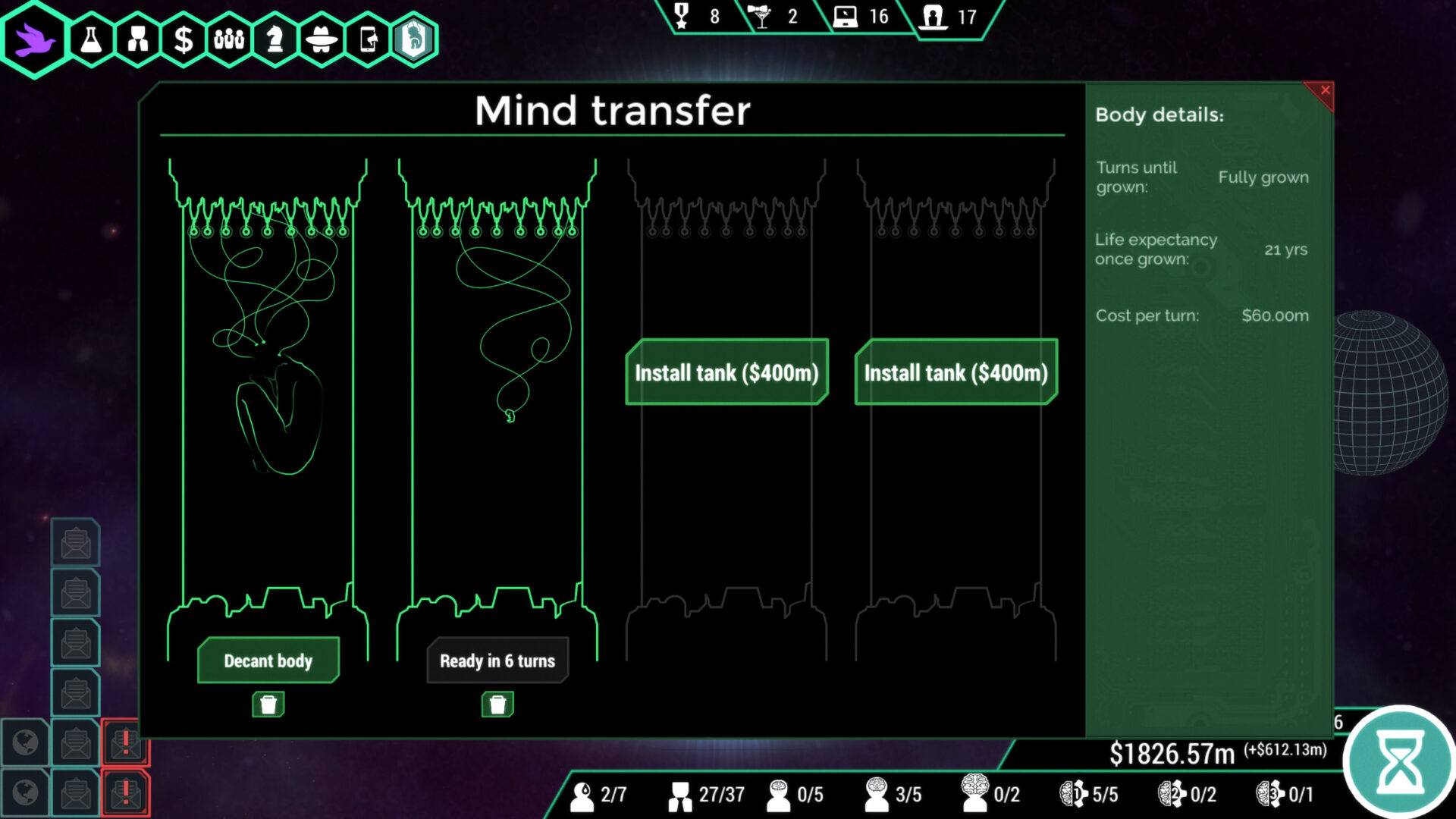 Rules are flexible, as long as there’s profit

Visually there’s not a lot to Spinnortality. The graphics, as you can see from the screenshots, consist mostly of a globe, some icons, lots of text, and a few charts, all held together by a stylish, but limited, UI. Rounding out the package, the music is good, and has a suitably futuristic-techno-sullenly-weird-vibe to it, and matches the mood perfectly.

After staring at the same globe graphic for countless hours, I should have been, by every right, desperately bored, but I wasn’t; I remained riveted to the glowing hemisphere before me. I think this is because the game weaves many of its best images in the imagination of the player, through its progressive narrative and well-constructed descriptions. This also makes the game feel humble and earnest in its approach to the material. The writing is solid and efficient, and the use of humor to soften the edges is well applied without overpowering the more serious ideas at stake. 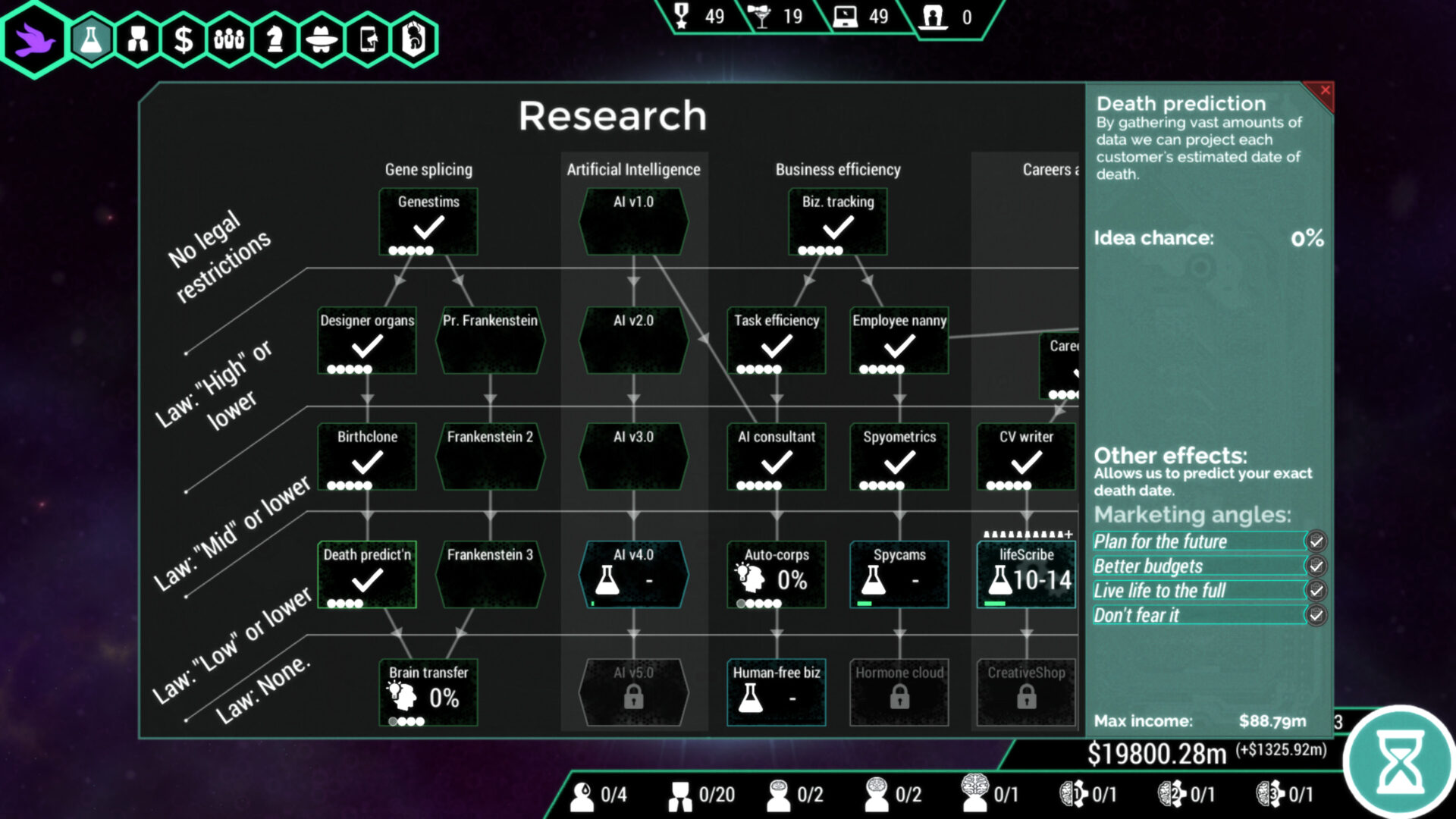 The game itself runs fine, although there are a few minor UI glitches and occasional bugs, however performance is great and I’ve not encountered any crashes or other catastrophic calamities. I do wish there were options available to customize the scenario a bit, for a game this deep and with this many possibilities, being limited to one scenario seems like a missed opportunity.

Also, the uncompromising length of the game is something to be aware of before diving in, as the overall pacing moves just slightly faster than fossilized amber, which could be a sticking point depending on your view. Progressing through the various technologies is fine, but trying to complete any of the victory conditions requires a serious Sid-Meier-level time commitment. Authority Points from board approval accrue very slowly, requirements are steep, resource usage is imbalanced and the near constant random events interrupt all but the best laid plans. 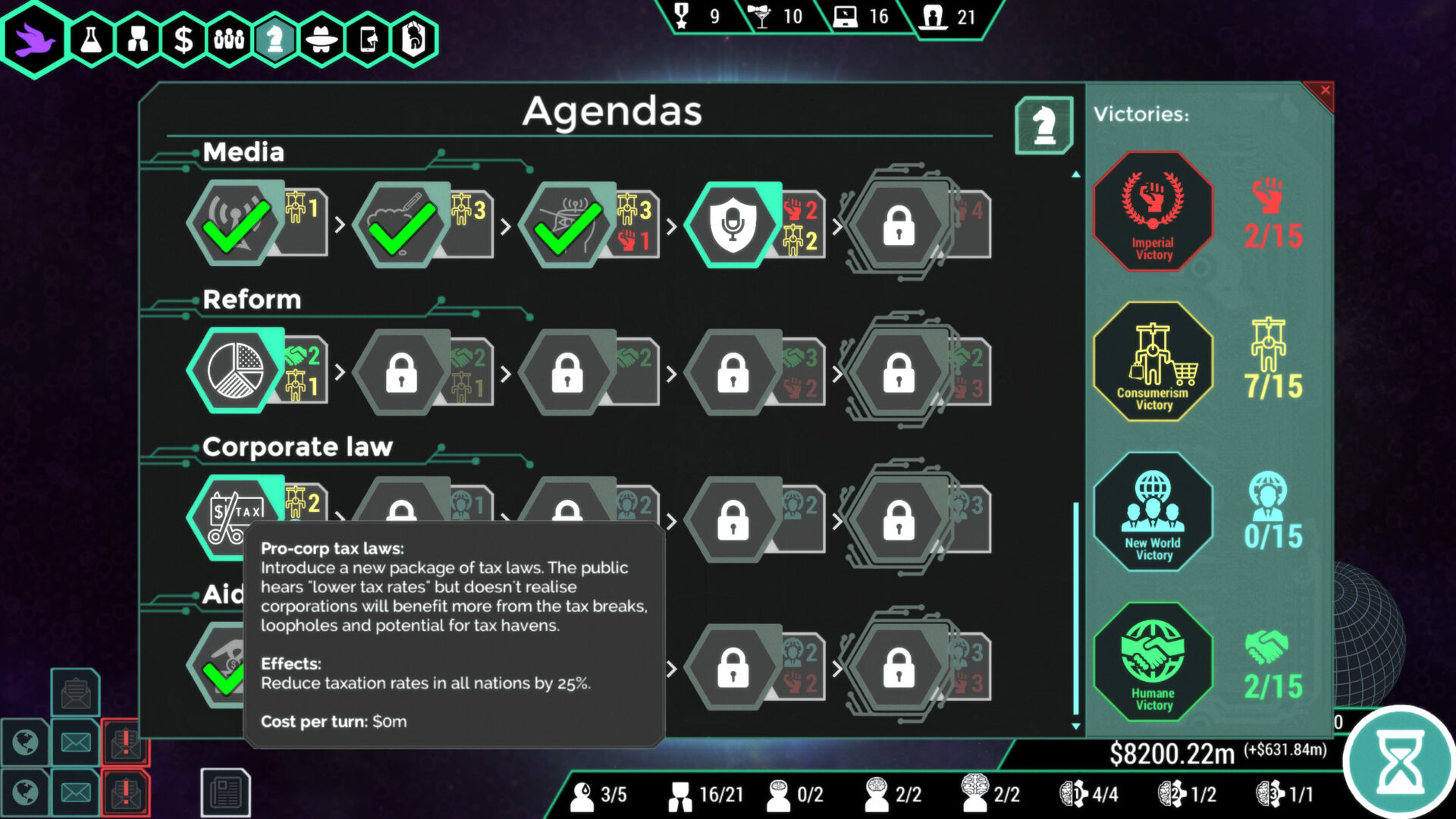 To the game’s credit, nothing about the pacing feels forced, artificial, or hobbled, and it all fits within the context of the world your inhabiting; after all, you do play a CEO who literally lives dozens of lifetimes.

My only lament is that the game offers so many potential paths and combinations that I’m eager to try different approaches, and in essence would like the chance to play half a dozen shorter games in the time it’s taken me to just get through one epic mega-game. Regardless, the end result is the same: Spinnortality offers excellent replay and is a great value considering all that is has to offer. 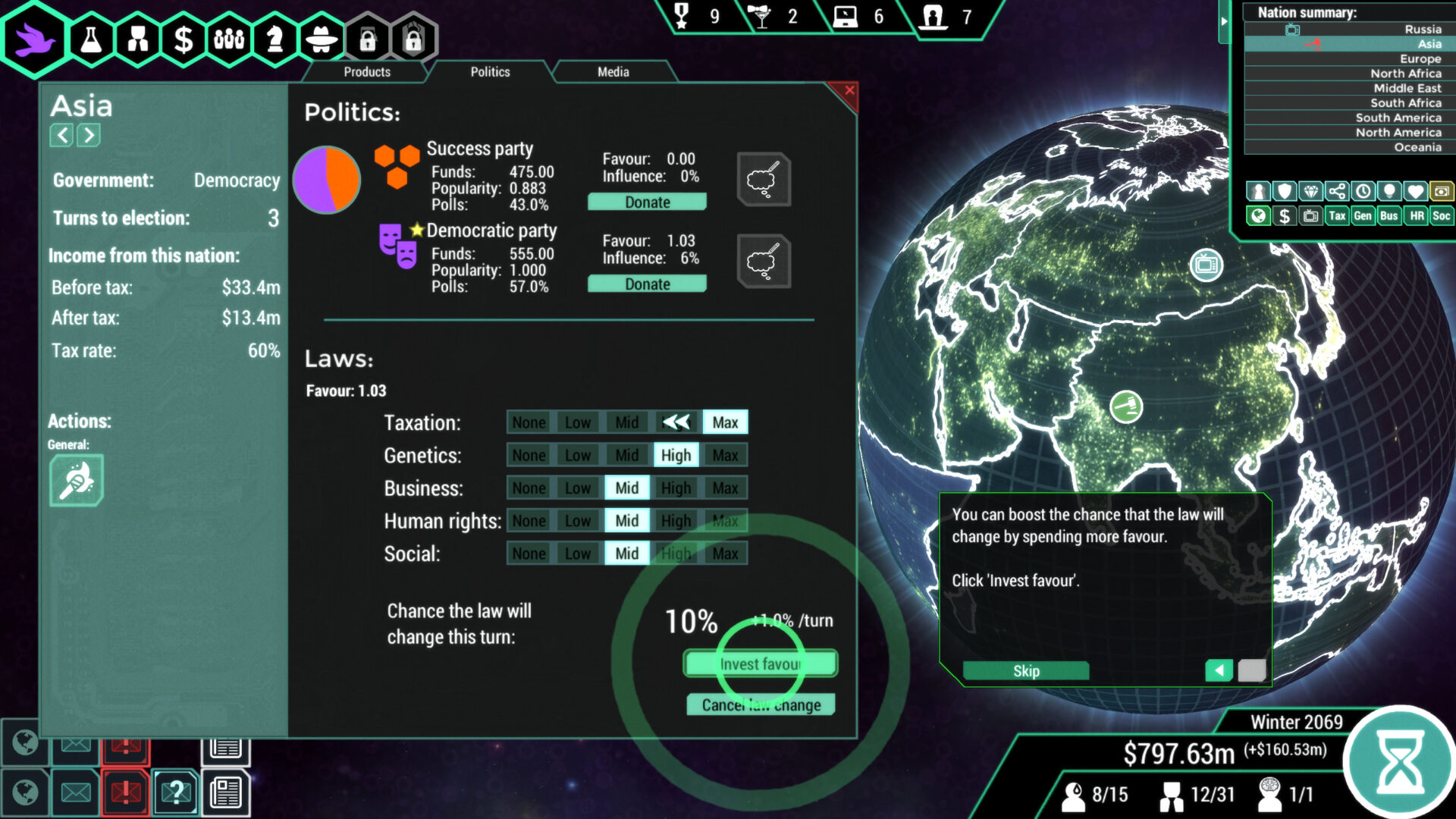 There’s a surprisingly huge amount of content stuffed into such a deceptively tiny package. The mechanics and controls are straight-forward and simple. Although it doesn’t seem like there would be a lot to do each round, there are so many small interconnected elements that are cleverly tied together, that the game never feels dull. At moments, it almost feels addictive. If I spent the time developing a new campaign, of course I want to stick around to see how it launches in Asia, even if it is four in the morning.

The tone is unique; it’s not bleak or dystopic, nor is it overtly satirical, rather it presents itself seriously but in a very casual and engaging way. It’s like an interactive thought experiment on unchecked corporate power…which is all well and good, but let’s face it, I’m just eager to see how much corporate mayhem I can get away with before I die. 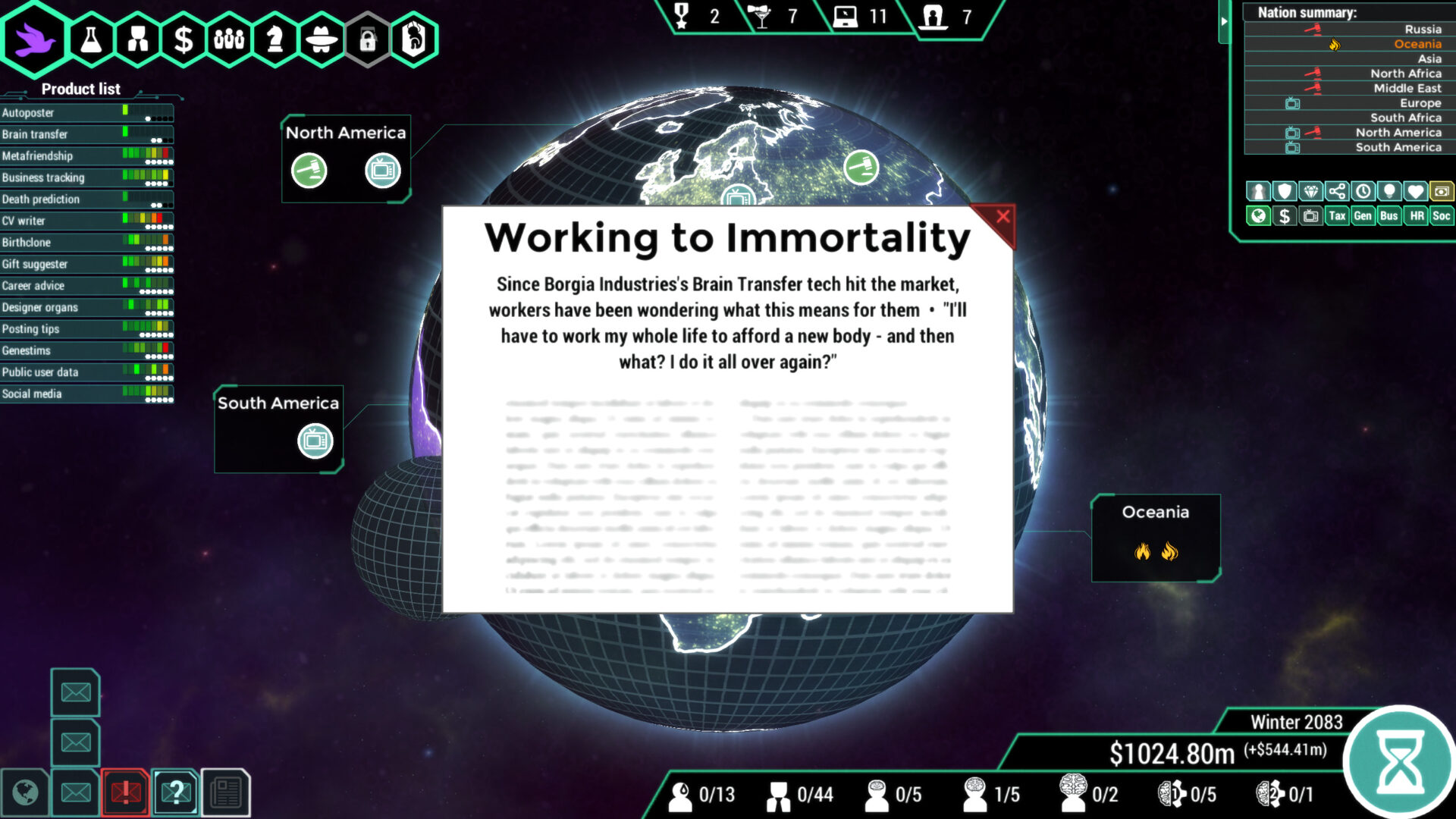 It doesn’t matter what particular political -ism you believe in, everything ultimately comes down to money; how to get it, and what to do with it once you have it. That notion may be cynical but it is the thesis that drives Spinnortality. Even if the situations and products are all just fanciful imaginations, they are so well thought out that they’re eerily plausible, and many of the decisions will make you second guess your own sense of right and wrong. It’s that sense of tortured ambiguity which developer James Patton has captured so brilliantly in this game. I desperately wanted to be a good person…but I also wanted to win, and in the dizzying world of corporate politics those are opposing shores on either end of a very long continent.

For better or worse, the game is unabashedly political, by its very nature it has to be, and the techno-speak that accompanies each new marketing gimmick is only a thinly veiled commentary on the struggles of our own post-industrial world. But the black and white battle-lines of morality are defyingly smudged with gray, as the player is constantly dared to balance two competing ideas, and make the right choice in a world that is increasingly full of wrong answers. In the end, Spinnortality promises nothing more than to put a shiny neon globe in your capable hands…it’s up to you to decide how it should spin.