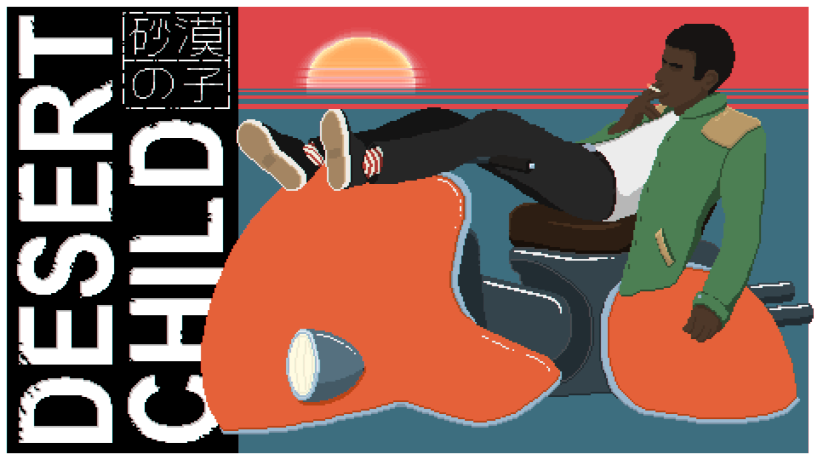 Good thing that you can use your old hoverbike to make money! After picking your weapon of choice (which varies between how big the ammo is, the spread, and how long it takes to fire) you are ready to race. Pitted against one opponent, you both will be placed on a randomly selected course (out of a couple available) filled with obstacles to try and slow you down. It can be as simple as a piece of a wall placed in the middle of the track, TVs, or even your own opponent. While you can’t really collide with your opponent, you can surely shoot at them in an attempt to slow them down. Though for you, it slows you down while also damaging your hoverbike. Thanks a lot, opponent who fires nonstop.

The TVs in particular act as both a hazard and a helper all in one. Some of them will shoot their own energized ammo when a racer is close, but shooting them will speed you up. Otherwise, you will normally utilize your dash to gain speed, quickly go from the top of the track to the bottom (or vice versa), or ramming the TVs. The TVs also have another use depending on what’s displayed on them. There are money TVs that will spill money when shot (though I’m not sure if you still get money for ramming it) and ammo TVs, only displaying a dot, that upon ramming will give you one ammo. Otherwise, having no ammo will trigger a truck to show up in front of you and from there you can dash to refill your ammo.

Winning will require you to utilize your dash at the right times since it’ll need to recharge while also staying away from obstacles and shooting the TVs around you. If you win, you get some earnings and a power cell. I actually really liked the racing. It’s just the perfect blend of feeling floaty while also being fast and responsive.

At first, you only have the basics outside of racing. On Earth, you only have one road available to you. You have a Pawn Shop that you can sell your power cells at, a mechanic so you can fix up your bike, a ramen shop to keep that stomach of yours full, and of course a stall that lets you enter in races or just chill on your hoverbike. Other than obviously keeping your hoverbike in top shape, keeping your hunger down is also important. At this stage, you can’t race if either of them are at 100%, but bike damage affects your max boost level while hunger affects how fast your boost recharges. 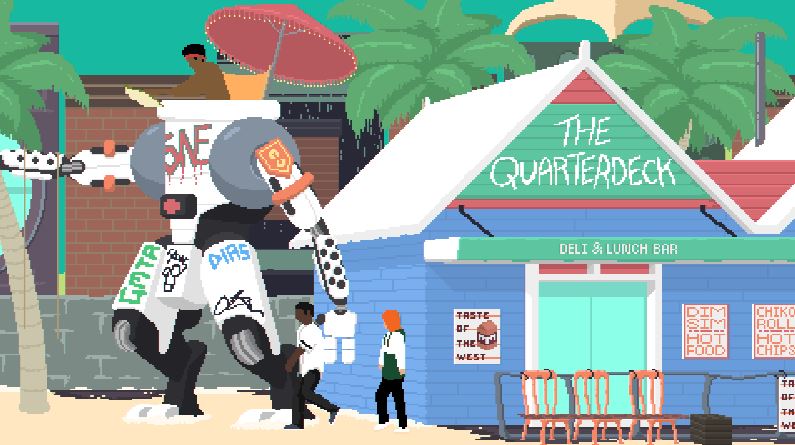 Once you manage to gather the $500, you’ll be sent off to Mars and end up in the big city. Here, the rest of the game just opens as you’re almost overwhelmed with how big this Mars city compares to your humble Earth town. A lot of what you had at Earth is built upon more, like where you would otherwise sell power cells, you’d want to put them on your bike to power it up instead. It also introduces bike parts, which the power cells power and will give you more edge during races. These bike parts have to be connected to power cells and have power reserved for them to work. You can either get the bike parts by buying them for a hefty $600 since parts for your hoverbike are rare here or *cough* steal it from other hoverbikes *cough*. Getting your bike repaired now costs more as well, but you do have two places to potentially go to. Instead of having that one ramen shop, you also have multiple food shops that decrease your hunger in different variables, with beans in particular being able to give you random effects.

Though you’ll soon see that the ticket to enter into the Grand Prix is $10,000. It’s time to get some racing (and practice) in. Racing pretty much stays the same, but with a slight increase in difficulty. Putting in bike parks can make it easier on you, but nicely timed boosts and shooting TVs is still important. In addition, you get a new set of tracks with new hazards, new TVs that only act to damage and slow you down, and secret tapes will occasionally show up for you to pick up (though I’m not sure the significance other than it unlocks something). 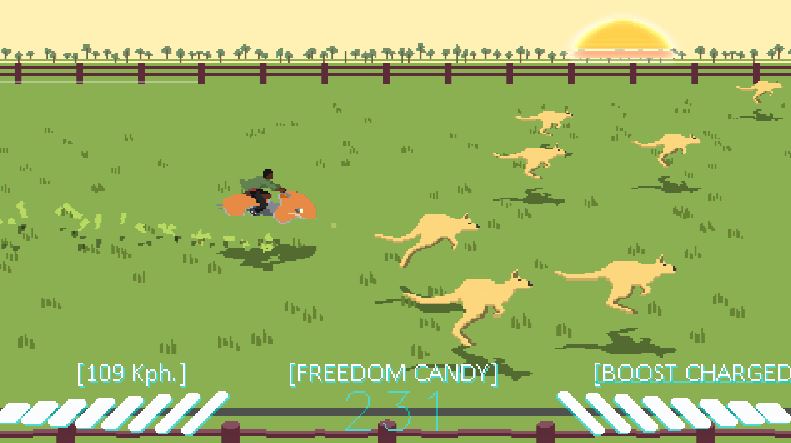 Luckily, racing isn’t the only way you can earn money as there are various jobs you can do. You can pick up odd jobs like delivering pizza, playtesting a gun (which is playable in NG+), herding Kangaroos, “tutoring” an amateur racer, and even bounty hunting. Though, I can see that you’re probably looking for something more nefarious. If you so choose, you can be paid to throw races, ram TVs outside of your races, and even rob a bank. All of these jobs are just a variety of racing, but this does introduce the reputation system. The more you do crimes, the more police attention you’ll receive and this will eventually lead to being chased by the police (and if you get caught, having to pay a hefty fee). Over time your reputation will go down, but you can also pay for 3 days of protection if you’re going for the achievement. Putting money in the bank will also speed up the process as interest collects (while also being able to sidestep the reputation fee), but I do suggest paying for things beforehand as you can either withdraw $10 or all of it. 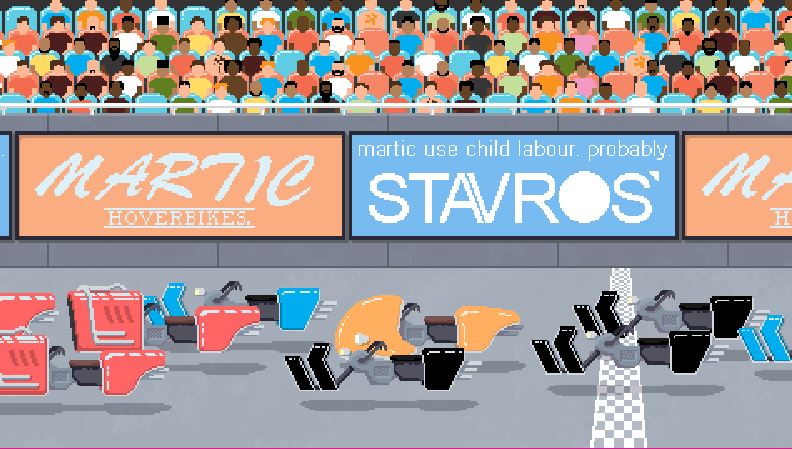 Once you manage to gather the $10,000 it’s time for the Grand Prix! Sadly it’s just 3 races right after another, but the difficulty does increase. If you fail any of these races, you’ll have to start over. Luckily, you’re pretty set once you get to this stage so there’s no need to worry about money anymore.

The absolutely best thing Desert Child has going for it is the soundtrack. Each track fits within this world and what you’re doing. I never got tired of one track, despite not buying more till way later. It’s honestly hard to pick a favorite track, but I have to go with the song that plays while you’re delivering pizza. 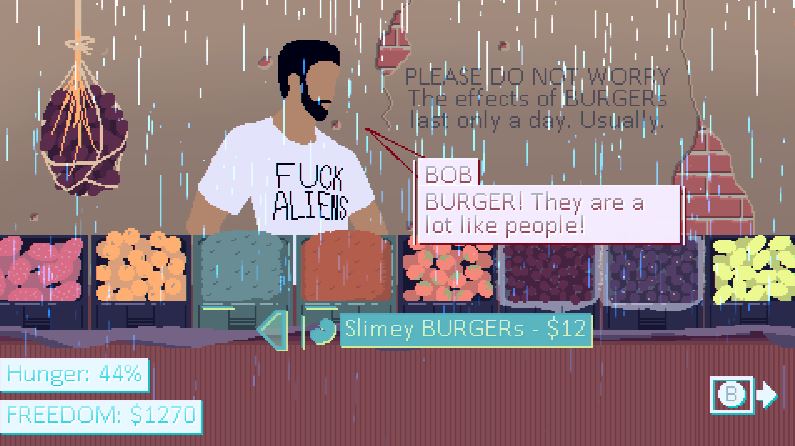 I didn’t know this until a minute before writing this, but there are actually two English language settings. I originally thought something was messed up on my end, but while I was messing with the settings when first starting, I left it on “American” English without realizing it. Imagine my confusion when everything from ramen to a freshly caught fish was labeled as a burger. It wasn’t till I made it to the Grand Prix stage that I messed with the settings again that I realized it. To be honest, after getting over my initial confusion, it’s pretty funny. Along with changing food names, it also changes ammo to freedom candy, changes most of the street names, wine to bud-lite, and many more.

Other than personally thinking that the ending is pretty lackluster, especially considering the little you learned at the beginning of the game, I do wish there was more to Desert Child like expanding more on the story, more variety, adding more little touches (like having progression with the gun testing job), and letting you change your weapon, but I do appreciate that it doesn’t try to stay too long. 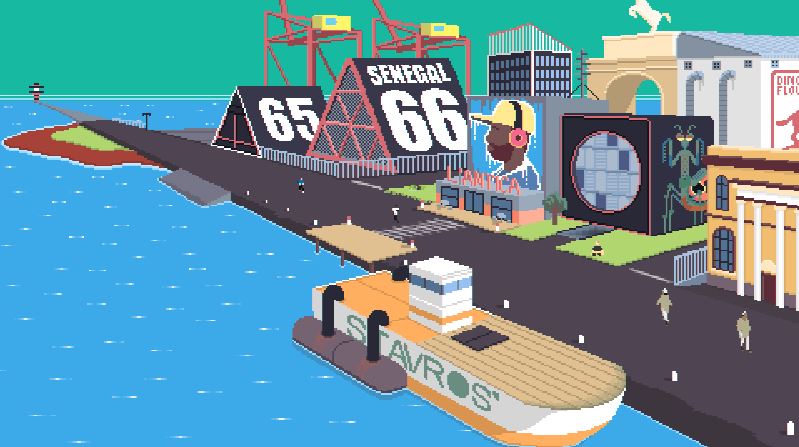 It’s pretty hard to recommend Desert Child to someone. It’s really fun racing and exploring Mars as you do odd jobs, but it’s not going to be as deep as a lot of people would want it to be and it can get tiring after a while. Those looking for a more story-driven experience that uses racing to its advantage will also be disappointed as well. Desert Child leans more towards those who like racing games with the side bit of taking care of your bike, aesthetics, and having an afternoon to kill.