REVIEW: The Ditzy Demons Are In Love With Me
2 comments
Share:TwitterFacebookRedditPinterestWhatsAppEmail

REVIEW: The Ditzy Demons Are In Love With Me

The Ditzy Demons Are in Love With Me (sic) is the latest Sekai Project – published adult visual novel, this time from newcomers to Steam, SMILE. From what I can gather, this seems to be a new development team with some members of Neko Works involved, including the writer and main character artist.

Thanks to Valve’s recent allowance of much more adult content, the game has an 18+ Adults Only Content patch available as a paid DLC, too. In the past this would have only been available from a separate store site, so this is definitely a step forward, and it’s great to see developers and publishers taking advantage of the change so quickly. That said, the game is surprisingly explicit in terms of textual content even without the patch.

Anyway, The Ditzy Demons Are in Love With Me (sic) — from now on referred to here as Ditzy Demons — focuses on Ren, a reasonably typical high school student who finds himself living in his school’s special dormitory for female demons who are, well, less than accomplished at using their demonic powers. The game starts with a glimpse of Ren’s future and it’s obvious from the get-go that the game is going to be rather focused on sex, with the opening scene focused on the five main demon girls feeling up Ren.

After the scene has been set with this all-in group Ren-masturbation session, the narrative jumps back in time to introduce Ren and his family and friends, and begins to take the player through the events that led up to the opening scene and beyond. 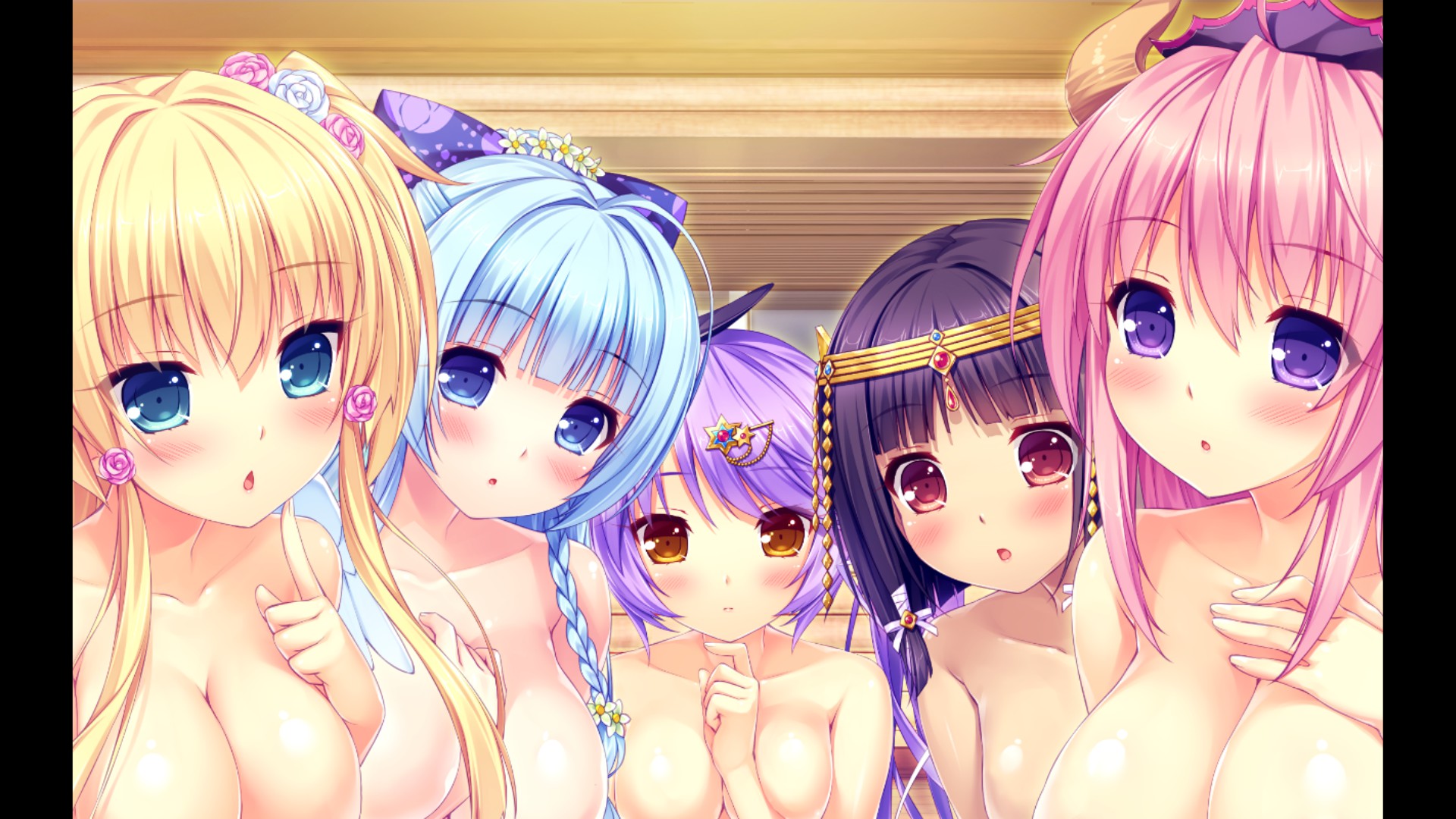 Presentation style is typical for the genre, with fixed hand-drawn backgrounds and large-scale animated ‘paper doll’ sprites in the anime style drawn over the top. Character art is fantastic, as any fan of Nekopara would expect from Sayori; the girls are each gorgeous in their own way, with their personalities portrayed well through their expressions, poses, and outfits. After having the opportunity to play Nekopara Extra, with its outstanding “E-mote” system, Ditzy Demons’ animations did seem like a step backwards in comparison, but they’re still better than most other visual novels I’ve played.

The game includes more extras than I’ve encountered before, too, including the fairly common, but very well populated, unlockable CG image and movie galleries, as well as an excellent sprite poser that’s a fantastic addition to the genre, similar in style to, though somewhat simpler than, the dress up mode from a Senran Kagura game. CG images in the non-patched version are risqué, but carefully placed blur, glow, or other obstacles always ensure you’re unable to see “the good bits”. Applying the R18+ patch not only reveals said good bits, but also adds a number of new images and sex scenes, a couple of which are animated. Even with the patch, though, genitals have mosaic censorship; it’s an adult patch rather than a complete uncensor patch. 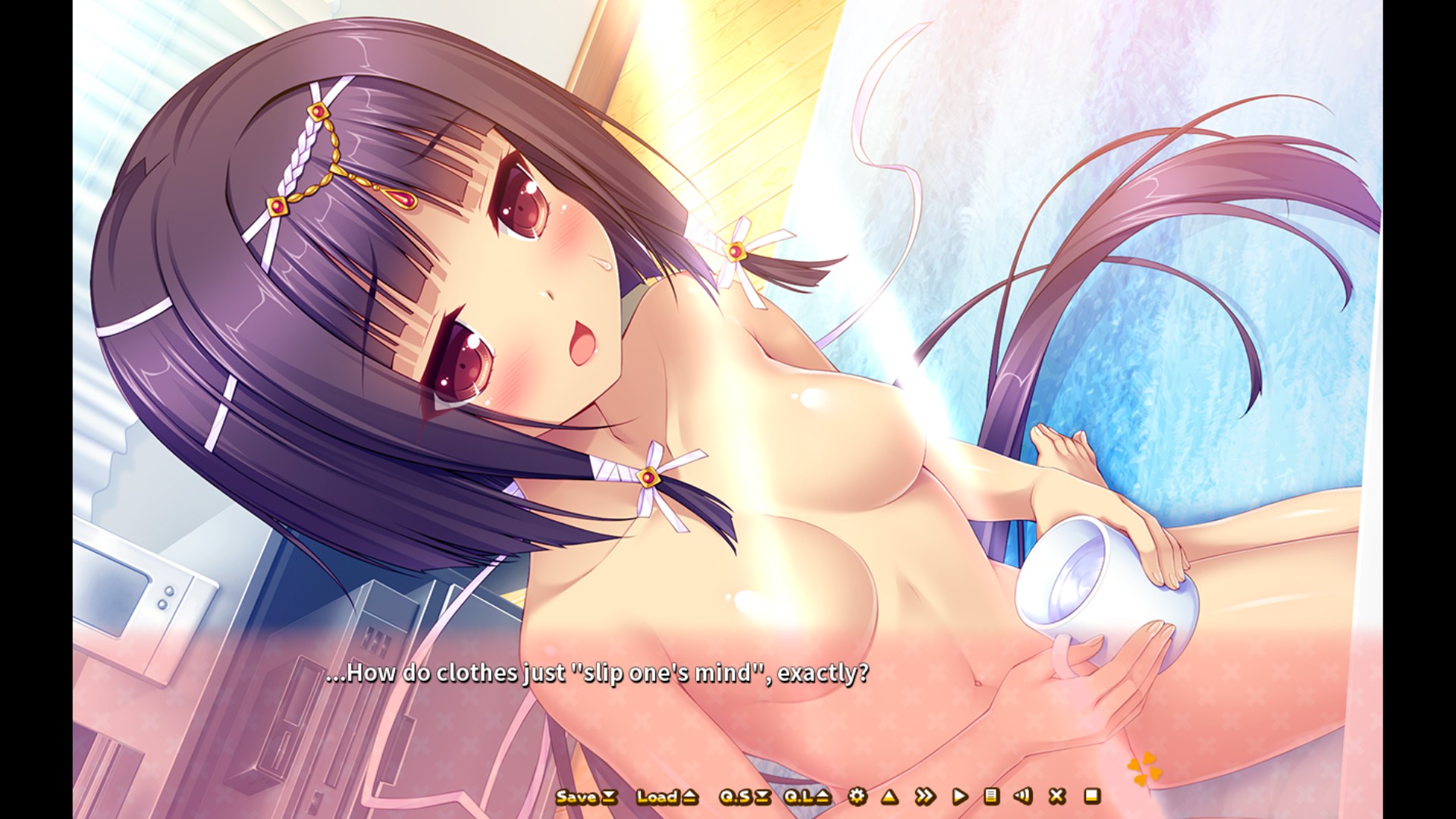 As with most visual novels, the sound effects are relatively minimal — it’s hard to insert background sounds into a VN without making it feel artificial — but the developers have done a good job in making what is here sound good and fit the atmosphere well. Some of the um, squishy sounds, can be a bit distracting in the sex scenes.

Music is much as you’d expect for an anime visual novel, like music from an anime series. It’s not really my sort of thing, but it’s well produced and sounds like basically every other professionally made anime visual novel soundtrack. 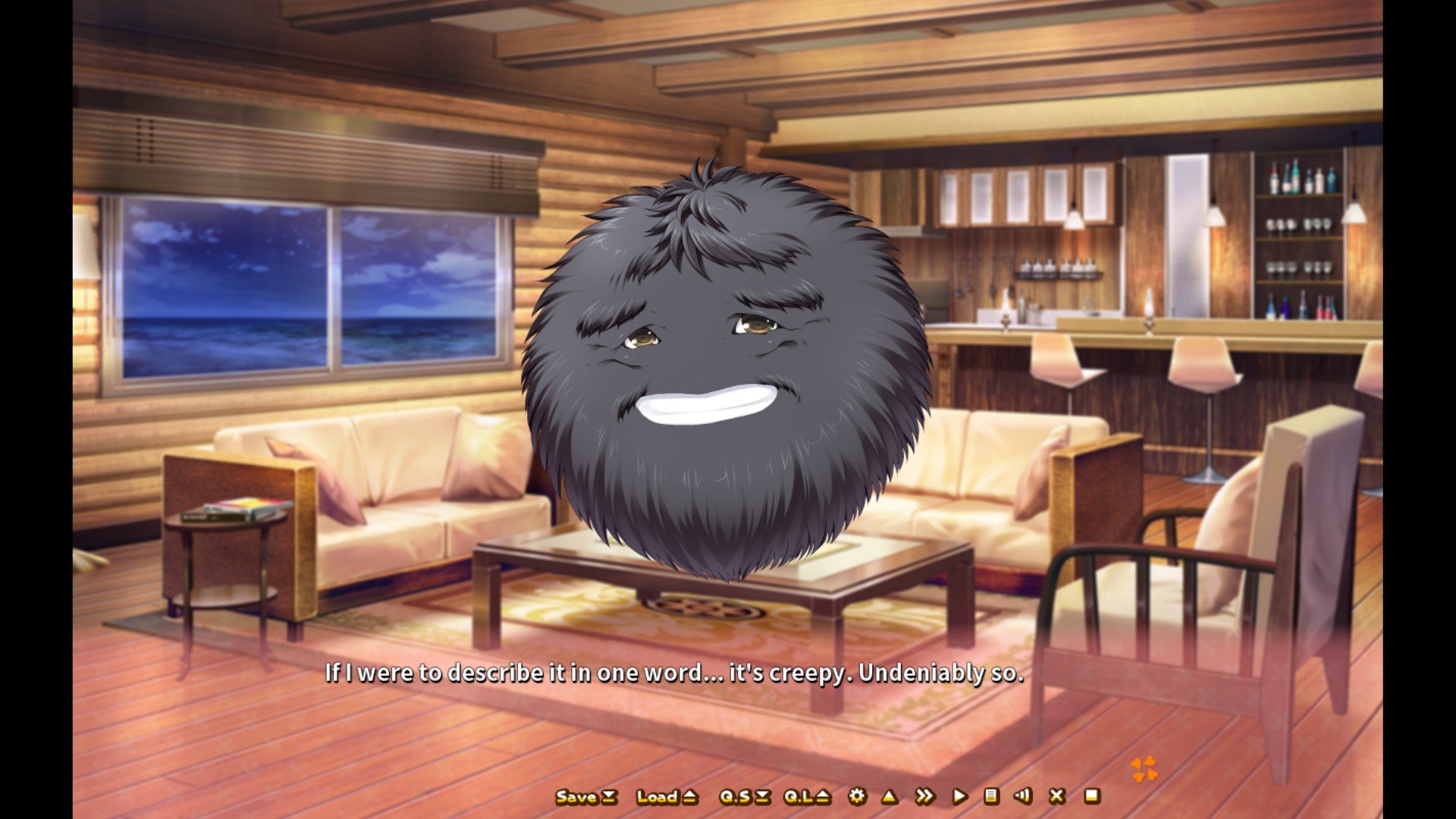 The game is fully voiced, apart from the protagonist, Ren, as is normal for the genre. I don’t understand Japanese so I can’t say whether the script matches the text, but the actors all sound professional and the sound quality is excellent. You might want to turn the volume down if you’re playing with the patch and other people are around, though; some of the sex scenes can get a little loud.

The interface is fully featured with all the standard stuff you’d expect from a modern VN. I experienced occasional lag while playing, but nothing too distracting. The interface can be hidden for screen shots or simply to enjoy the view, and there’s a full text log and almost instantaneous warp to any line of the story in the history. Initially the line breaks seemed broken, with the main text box often displaying text that was split mid-word, but for the last few hours I’ve been playing that problem seems to have disappeared, so I think it must have been fixed in one of the updates that have been deployed before release.

Oh, the panic mode screen is worth a mention, too; it displays a random image from a small selection and one in particular makes me laugh every time I see it. Hello Gome! 8-D 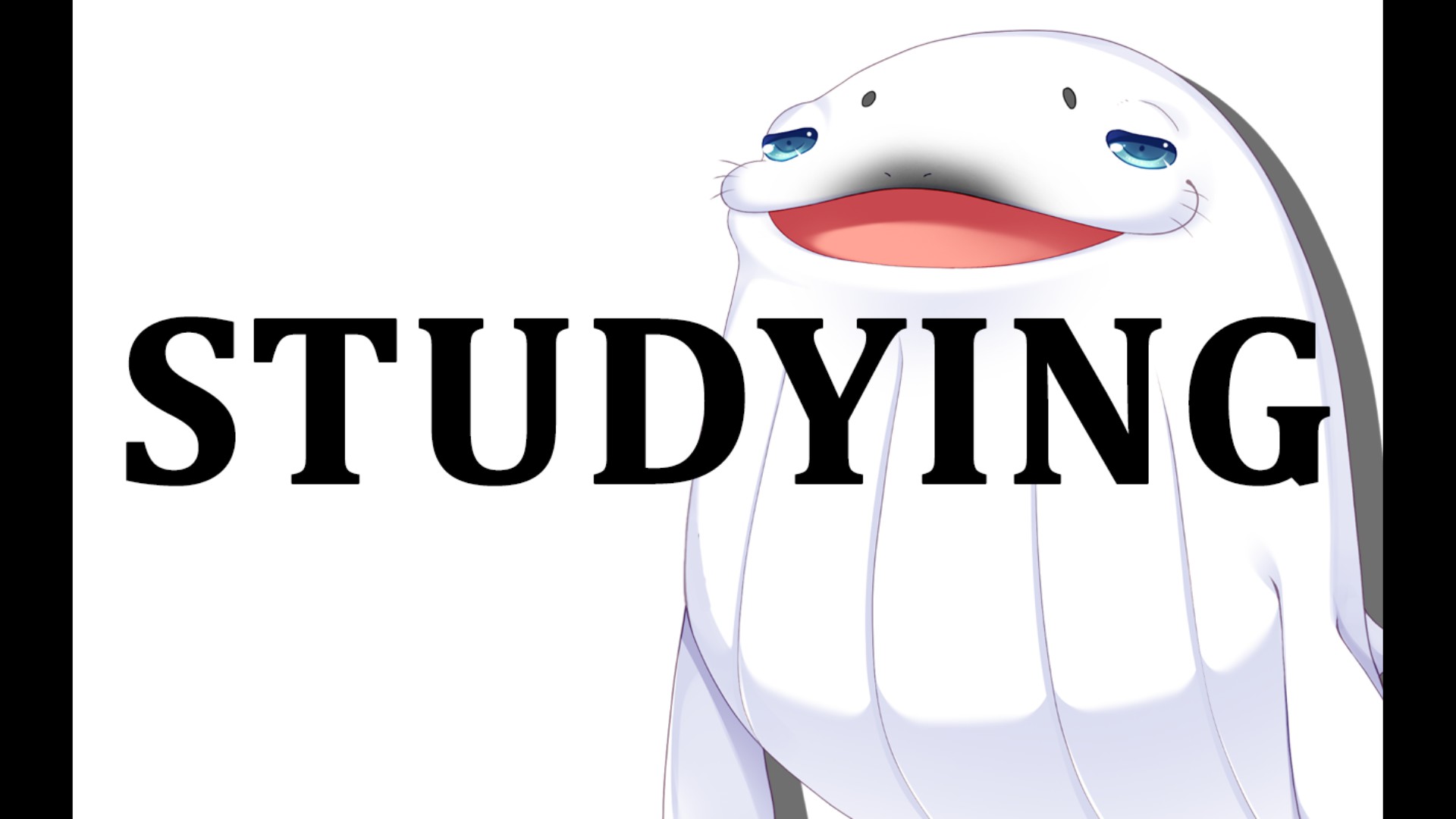 Ditzy Demons’ gameplay is typical of visual novels: the text of the story is presented to you a paragraph at a time from the point of view of the protagonist (Ren) in the main text box, you click or press a key to advance to the next paragraph, and watch the pretty pictures change as the story progresses. Ditzy Demons includes a single decision point some hours into the story, at which you can choose which of the game’s main female characters you want to pursue as Ren’s love interest, and then you continue in the same vein until the story finishes. Then you can go back and play again, choosing a different girl. 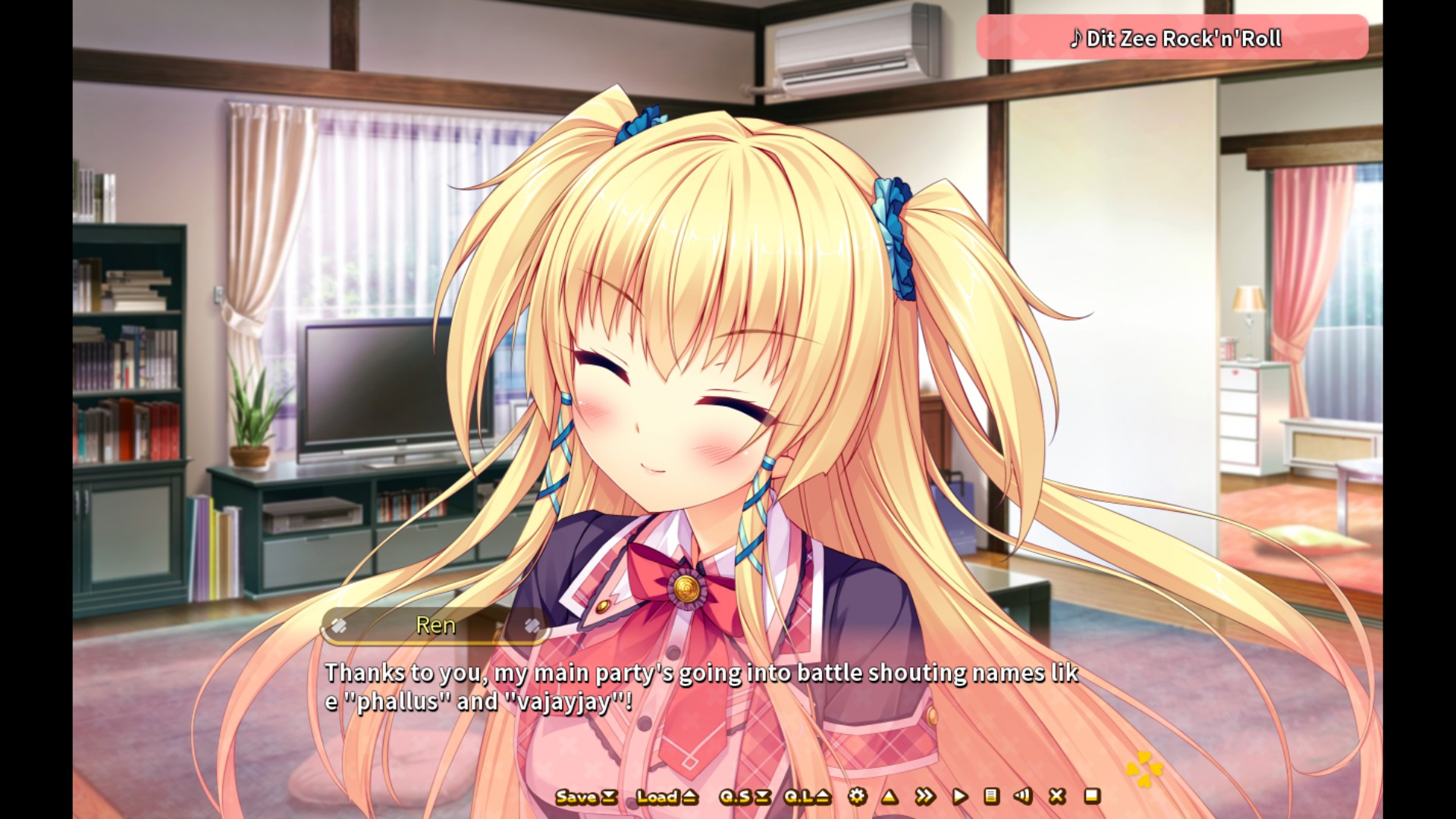 The story is quite long — much longer than any other adult-oriented visual novel I’ve played. I’d estimate the fully patched story would take anywhere from 10 – 20 hours to complete all of the endings, depending on how fast you read (and how much attention you pay to the sex scenes), with the unpatched version probably clocking in at something like 20% less than that. As I mentioned, the patch is available as a separate purchase on Steam. Normally I get annoyed when such patches aren’t made available for free, but this one offers more content than any other patch I’ve seen. There are multiple sex scenes, some of them animated, and large sections of the story that are otherwise glossed over. That’s not to say the story has holes in it without the patch; it doesn’t. But where the unpatched version alludes to what happens in the sex scenes, the patch shows you in detail. 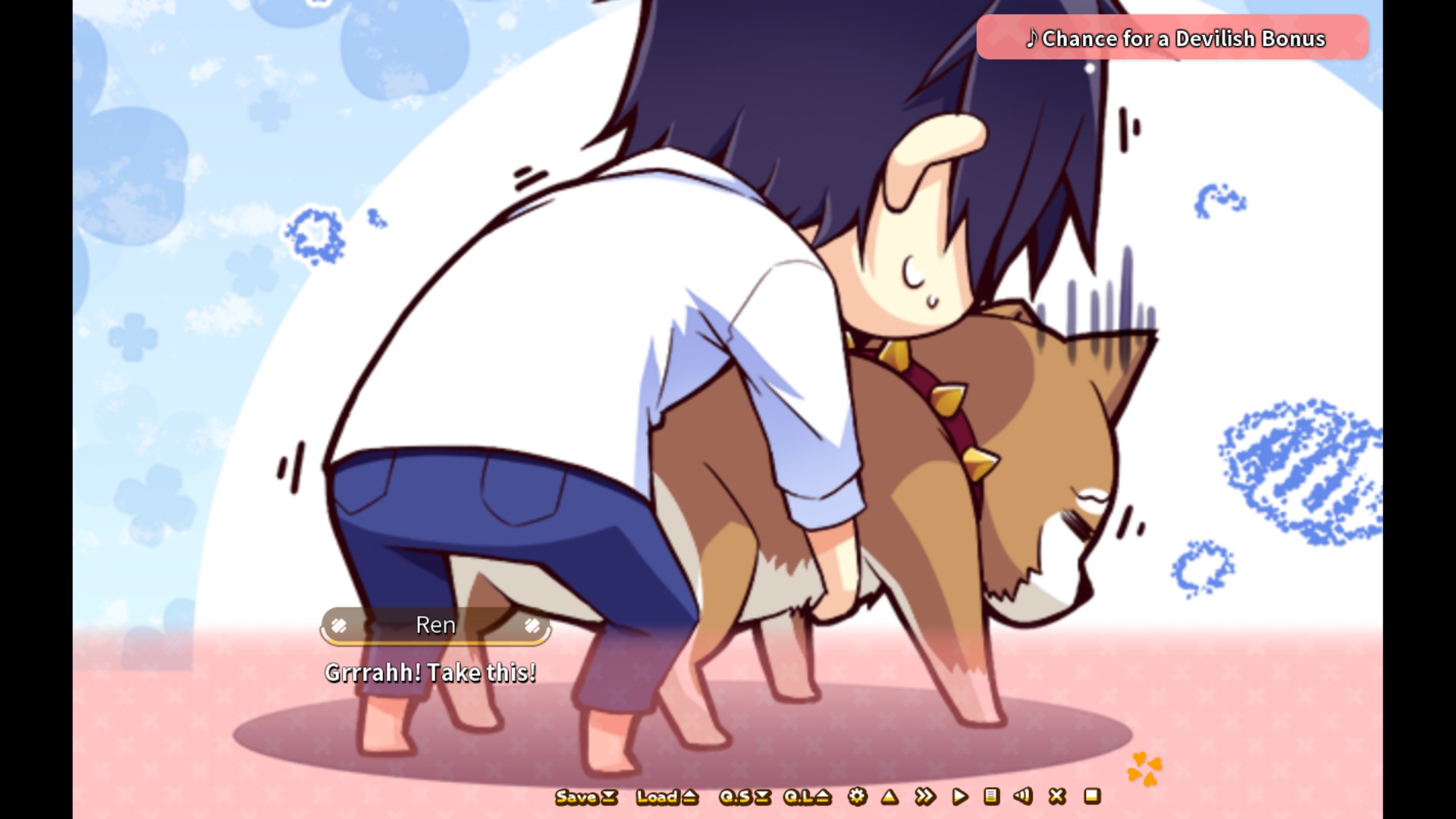 There are five main demon-girl characters, with three supporting characters and some funny demon pets to get to know as well. To begin with I was a bit bored by the stereotypes portrayed by some of the girls, which seemed almost like a copy of Nekopara’s characters: the brother-obsessed younger sister; the sexy, but rather oblivious, friend; the loli; the catgirl; etc. But after playing for a couple of hours they grew on me, and pretty soon after that I’d forgotten that I’d even been annoyed about them in the first place. The genre is full of stereotypes and tropes, and Ditzy Demons actually does a pretty good job with them. 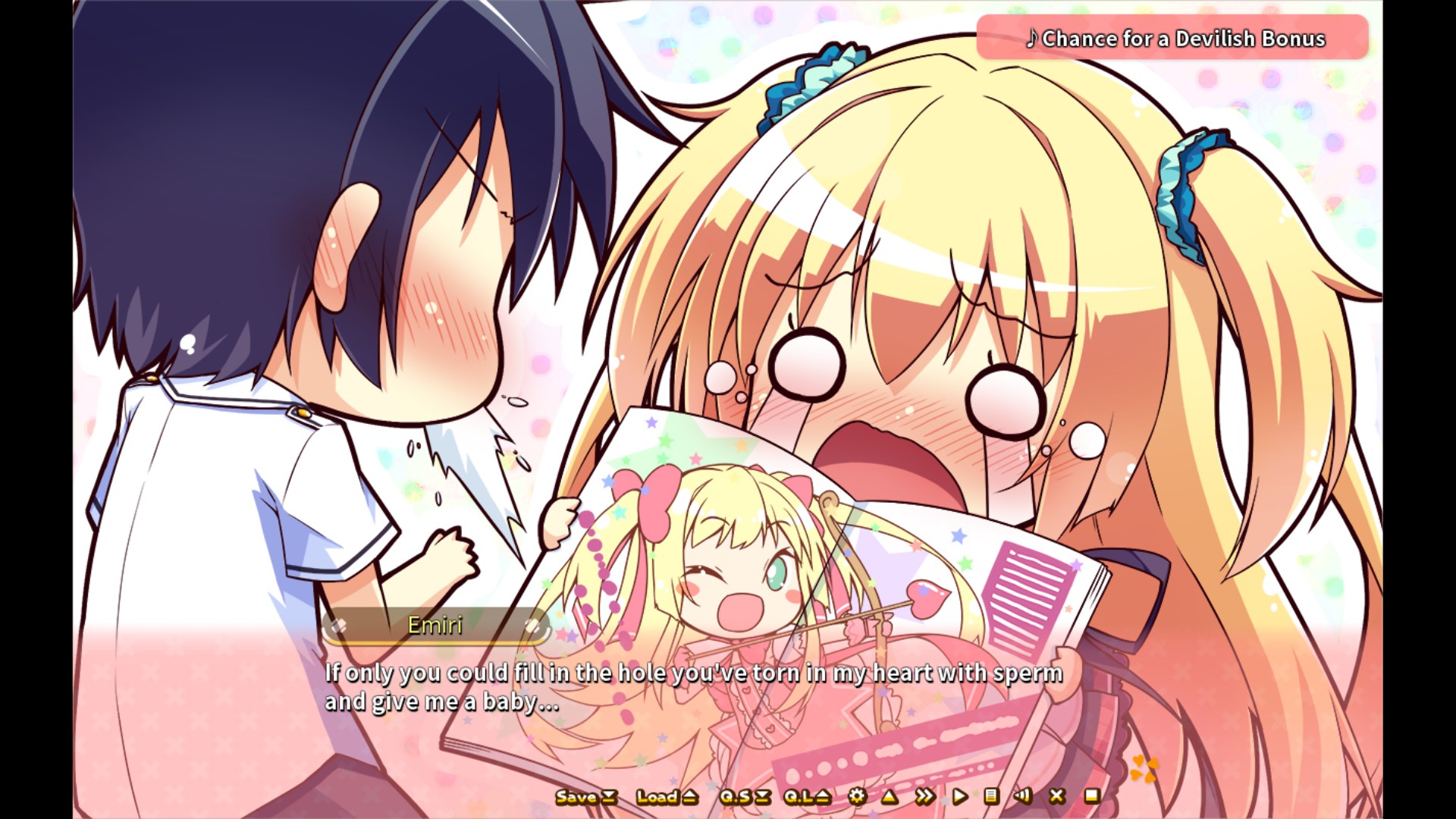 The story itself is mostly very well written and, assuming an original text in Japanese, has been translated perfectly to read in English. There are a few small grammar and spelling errors and a couple of other errors, but especially given the amount of text, the developers have done an admirable job. There are some laugh-out-loud parts in the script, and the ejaculation countdown in the patched version makes me smirk whenever it appears, but some of the sex scenes, which are very explicitly written, can be a bit much for my gentle soul at times. 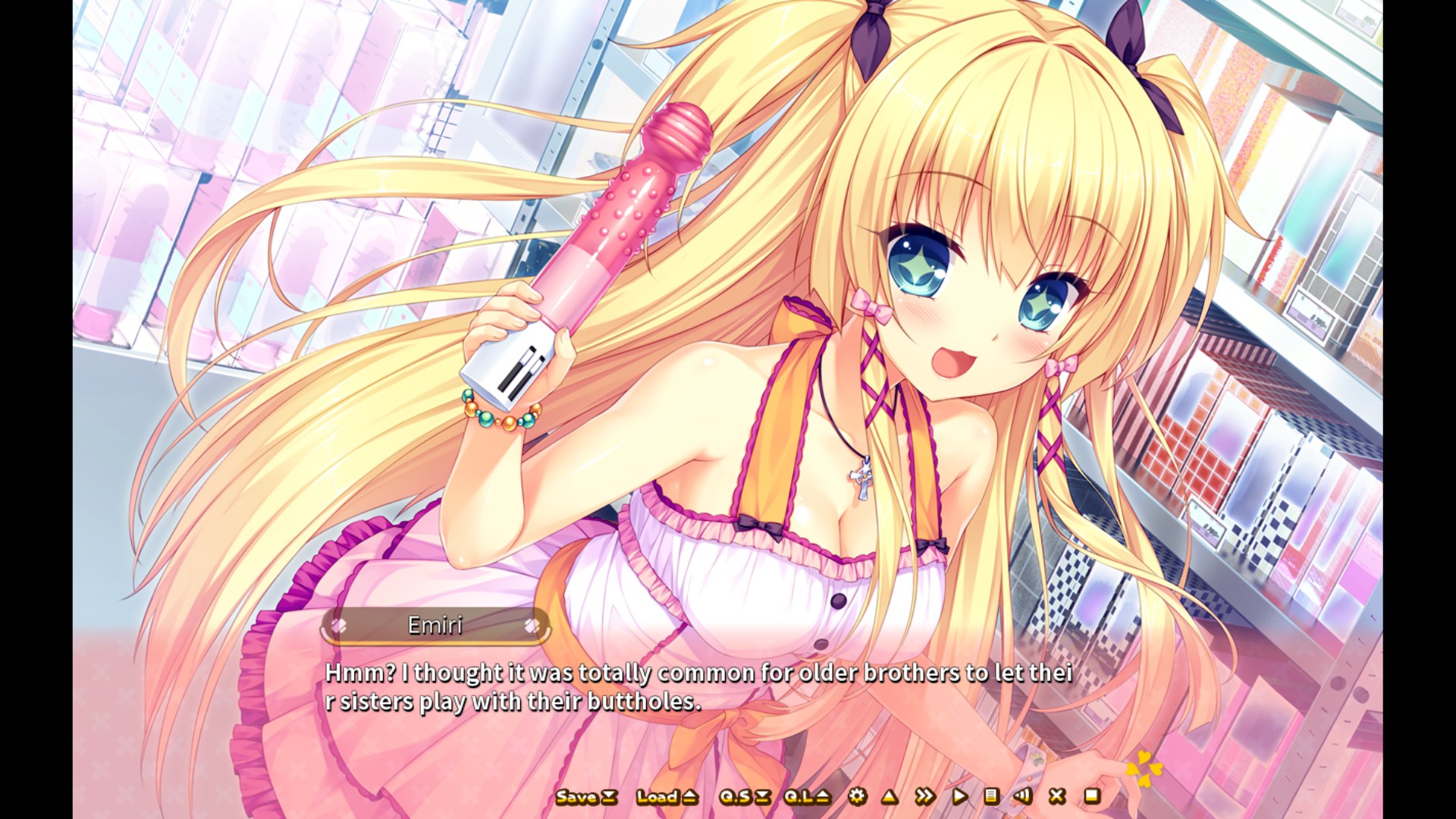 Ditzy Demons is the best ‘sexy’ adult visual novel I’ve played. It is exceptionally well produced with excellent art and perfect translation, is of remarkable length with more extras than any other VN I’ve seen, and comes in both titillating mature and explicit R18+ flavours. The dialogue in the sex scenes can be a bit much on occasion, and the mosaic censorship is a shame (though somewhat expected), but if sex-oriented anime visual novels are your thing, I honestly don’t think you can go wrong with this one.