Bursting at the seams with silly jokes, black humour, and outstanding graphics, Breathedge is a comedic science fiction game that’s worth a look while it makes its way through Early Access.

Breathedge is a science-fiction comedy first-person exploration game from RedRuins Softworks. Chapter 1 has only just released into Early Access on Steam.

The game starts with a flurry of jokes that I, at least, found pretty funny. After the short credit sequence you’re left in front of some robotic thugs who demand you tell them the real story of how the hearse-liner “Unnamed” was blown up in space somewhere out on the edge of the known universe, after they’ve beaten you up a bit, of course. And that sets the scene for the game.

Remembering back, you see a short CG sequence showing the last moments of Unnamed and then you find yourself in a small shuttle cabin, somehow still mostly whole after the massive liner’s unfortunate incident, with a smarmy and sarcastic AI voice in your space suit telling you what’s what. It’s your job to survive for long enough to reach the evacuation zone and escape from the wreckage, together with your family’s immortal chicken, of course.

The introductory CG sequence is excellent, but I wasn’t expecting the in-game graphics to be quite as good as they are. Breathedge uses the Unreal engine and it looks fantastic! Graphics are AAA quality, with the game world modelled on a weird sort of 1950’s ‘retro-Soviet’ science fiction look and feel. It reminds me a lot of Bioshock, with that same sort of weird-SF feel, but it’s unique, with the comedy aspect helping to carry it along.

The game world in this first chapter, at least, is actually quite small, but the developers have done a fine job of making it look much bigger when you first start. The ruin and detritus from the Unnamed’s demise is spread across an area of near-planetary space populated with small asteroids. The frozen liquids that have burst from various parts of the huge vessel deserve special mention, as do the frozen-in-space set pieces that you’ll find scattered about the wreckage; they look amazing, if rather gruesome at times. 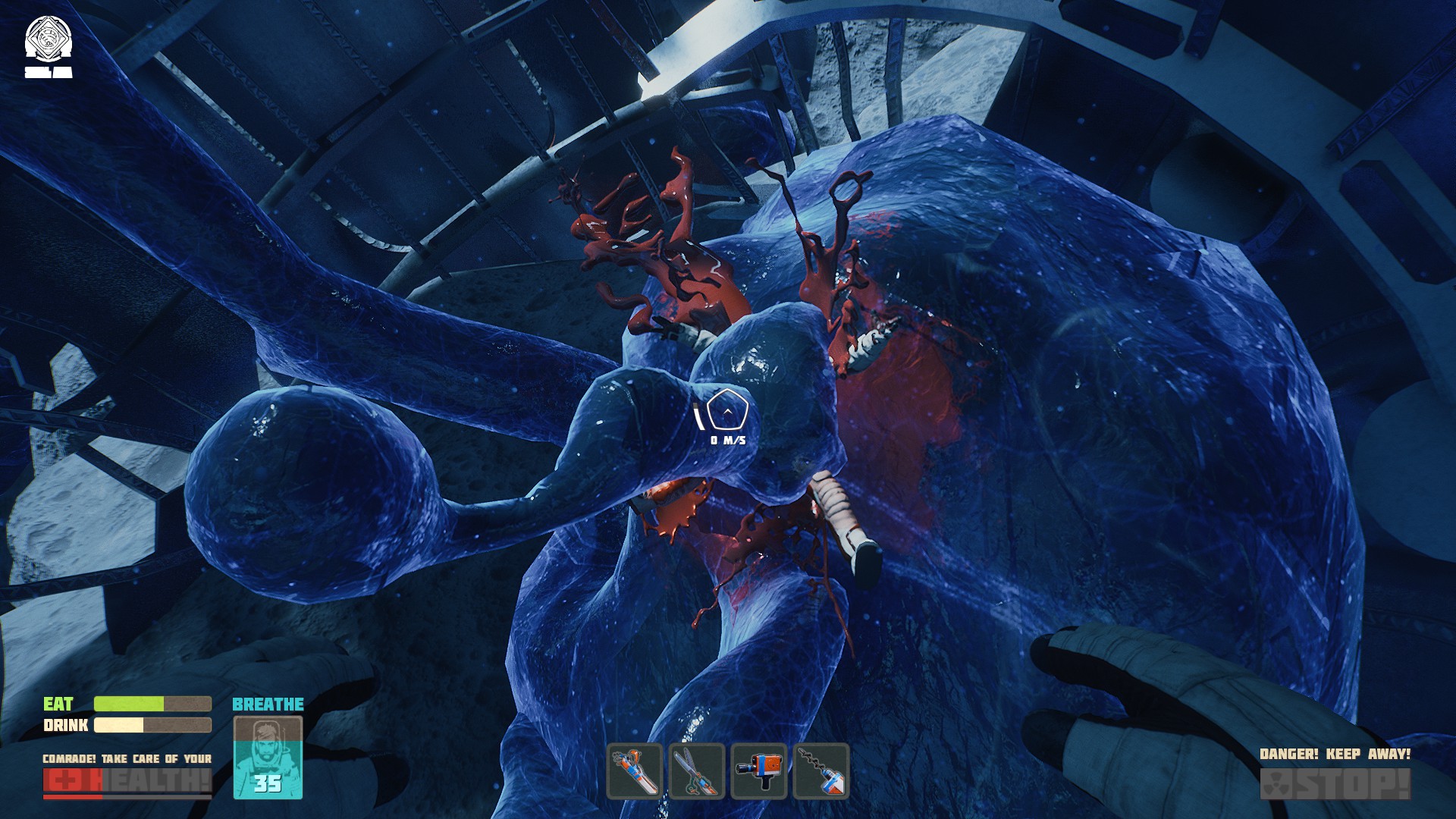 The great graphics are accompanied by good sound effects and an excellent selection of contextual retro-style music, often complete with a sort of tinny radio effect that fits the atmosphere of the game to a tee. There’s professional-sounding voice acting, too, which is mostly very well done, though in places I thought the space suit AI — which does most of the talking in the game — could use a little bit of tweaking.

Performance is mostly excellent on my GTX1070-based gaming laptop at 1920×1080 with everything set to “epic”, but it’s worth mentioning that the in-game survival guide video didn’t play well at all, jumping and stuttering throughout most of the video, which made it not much fun to watch. 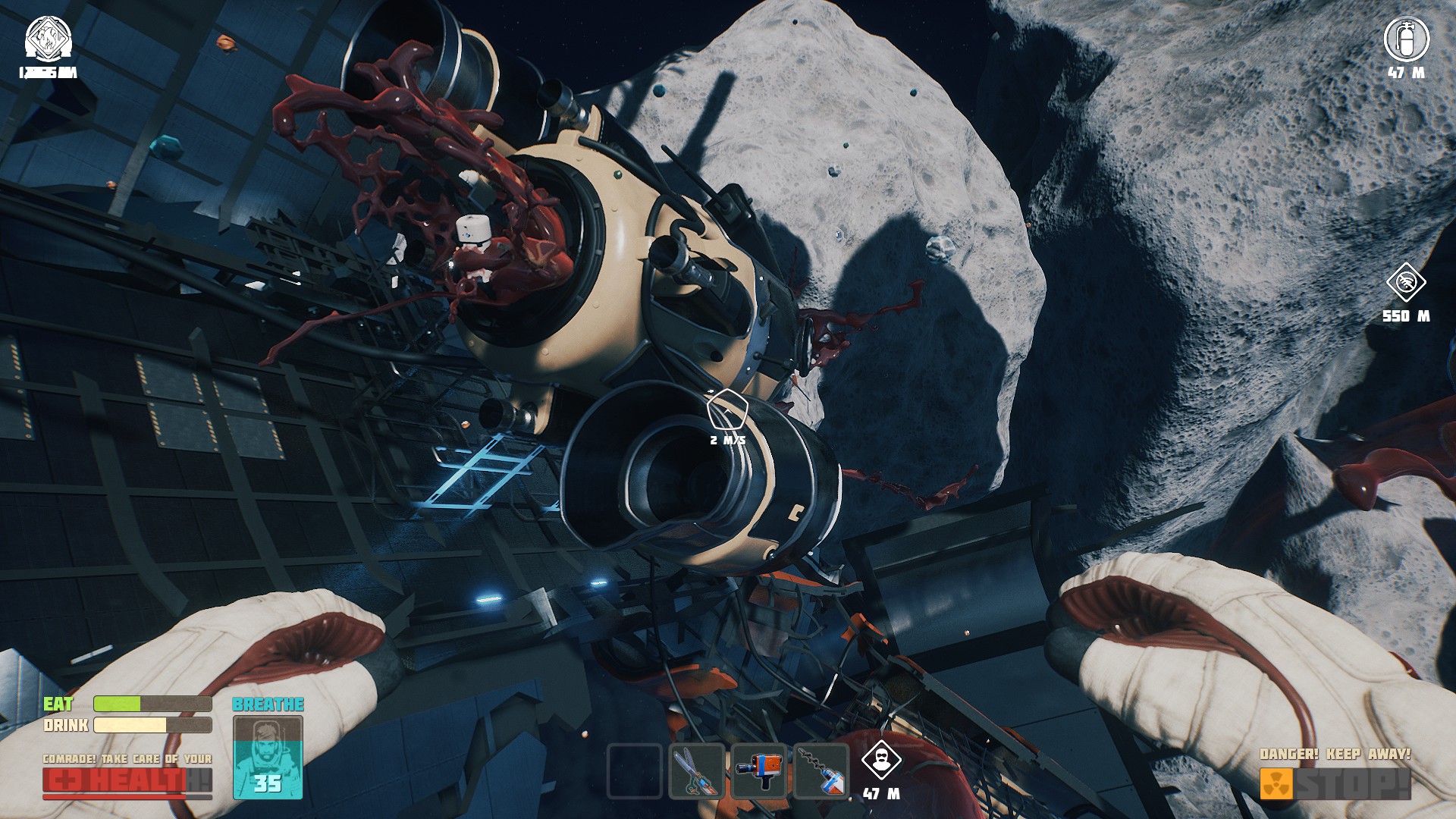 When I first started up Breathedge I thought it was another first-person survival-crafting game, but having completed the (rather small) amount of content that’s here so far, I think I was wrong. It’s actually more like a sort-of action puzzle game, with crafting forming the basis of the puzzle solutions. 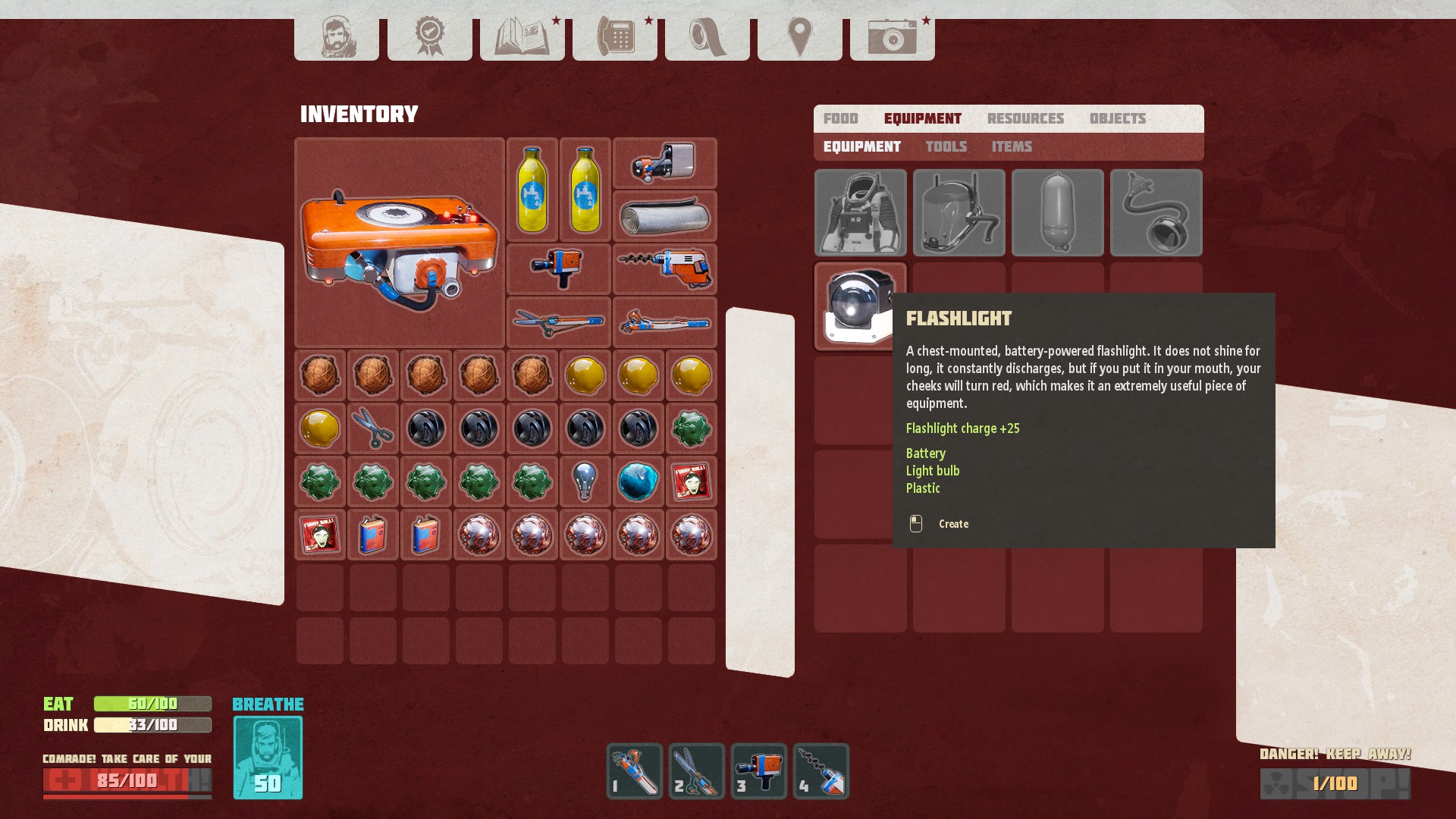 Scattered about the wreckage of the Unnamed are a number of little areas. Close by are food and ice (for water), as well as some metal and a few other components. Venture further out and you’ll uncover oxygen-generation and storage plans and components, aluminium, lead, etc. Progress through the story involves reaching each of these areas, learning the new recipes available and scavenging the new resources, then making your way back to your base shuttle to convert them into the means to reach the next area. Your ultimate goal is to enhance your space suit for extra speed, oxygen, and radiation protection, so you can make it across the 1.6 km or so span of the game world to the evacuation area.

But, unlike most survival-crafting games, Breathedge seems to punish you for exploration. The easiest way — perhaps the only way, given the apparent scarcity of resources — to succeed in the game is to abuse the save system: save your game, go out on suicide runs to explore the wreckage, discovering where important components are located, and then reload, using your meta-knowledge to plan out which areas you will visit and how. This seems to me to be completely anathema to the survival-crafting genre, and I found it quite hard to get used to given my expectations of the game. There’s nothing wrong with it, exactly; it just wasn’t what I’d expected. 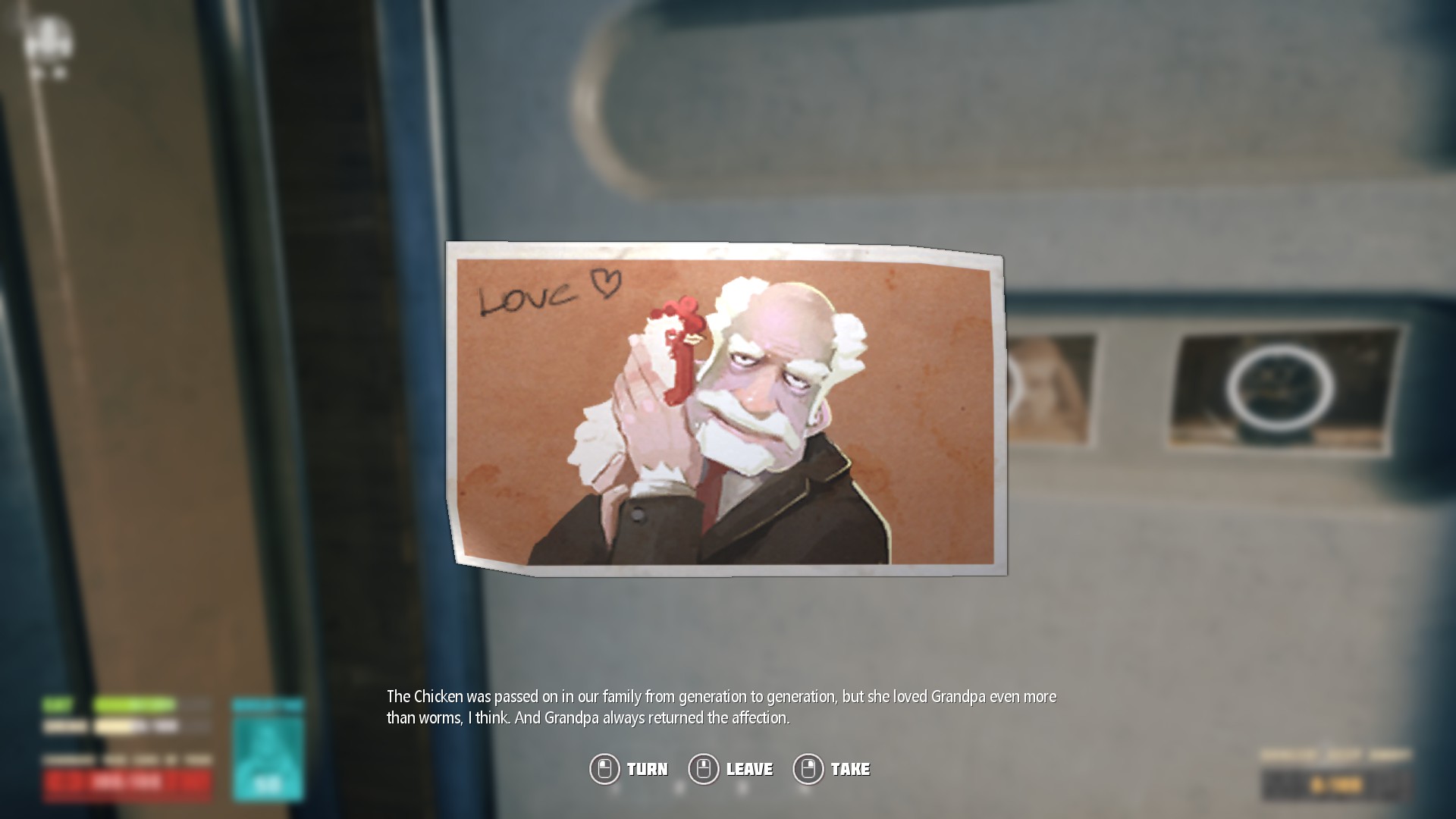 The crafting itself is fairly typical, though there are no craftable crafting stations; everything is built by carrying the collected ingredients back to your base shuttle and using the single station in the kitchen area. This makes the whole game a series of relatively short, fast resource-collection runs out into the wreckage and back to your base, followed by a long final run to the end zone, all while trying to keep your food and water meters up above zero — which tends to only be a minor distraction. There’s also no combat and there are no enemies to speak of. 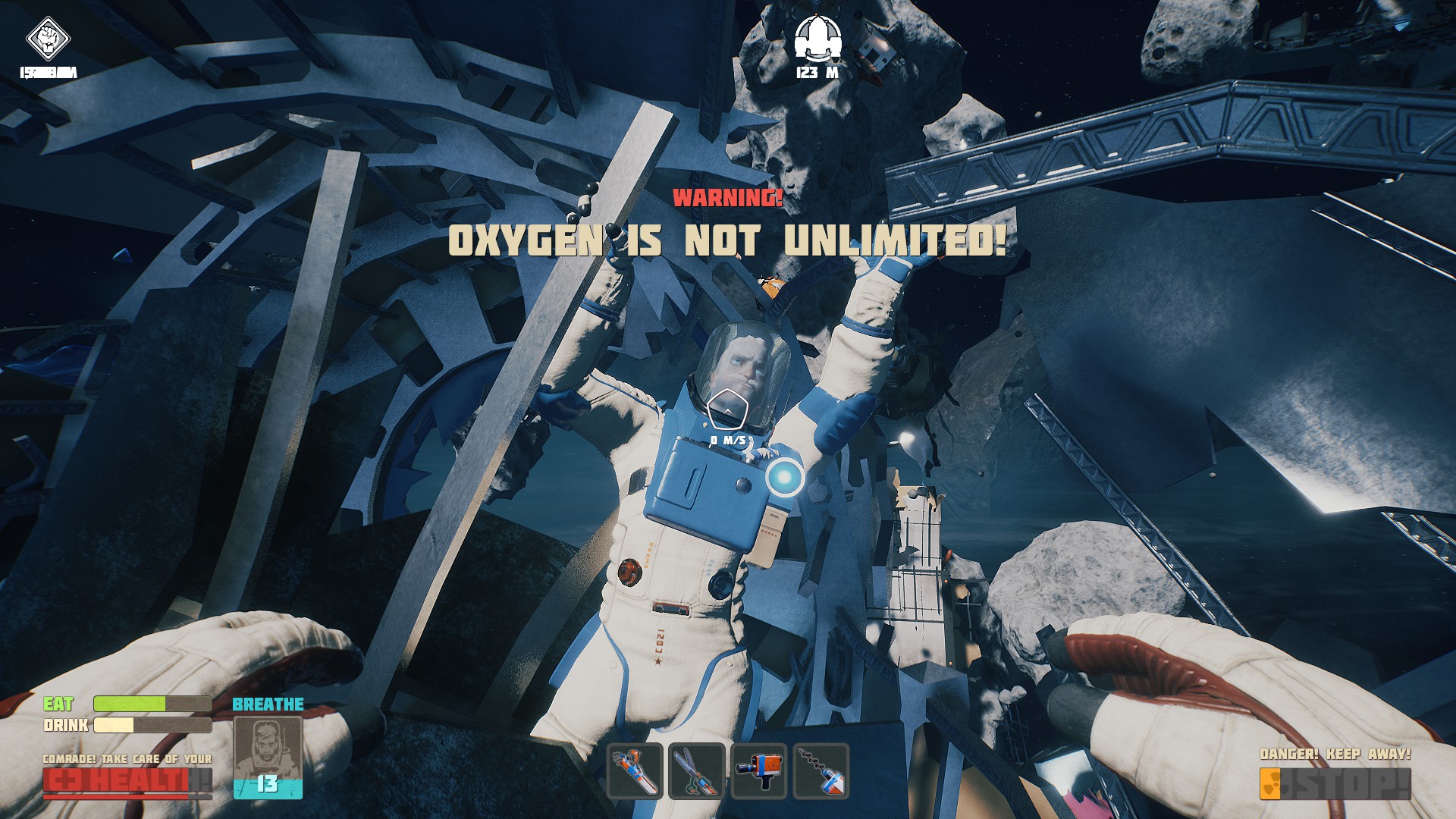 Once I came to terms with the basic gameplay model, the only real problem I had with Breathedge was the rather weird space controls. The game maintains a sort of “up” direction, rather than letting you move with six full degrees of freedom, as I’d expected from this sort of game. It takes a bit of getting used to, but probably in the long run it will make control easier for anyone not familiar with 6-DOF games. The strange friction effects, though, just seem plain wrong. Your speed is locked to 12 m/s normally, but there’s no reason given for this apparent violation of the laws of physics — I should be able to keep increasing my speed while I continue to apply a force. Similarly with the boosted 20 m/s speed; this drops down to 12 m/s as soon as your boost stops. Why? It makes no sense!

I think it’s probably possible to spend too long treating the game as a typical survival-crafting game and end up using all of the useful resources within reach, effectively trapping you. I worked out what the game really wanted before I managed to do that to myself, though, so perhaps some of the resources respawn at some point, avoiding this problem. Inventory space is also a bit of an annoyance, as it’s limited both within your space suit and in your shuttle base’s storage. Removing the shuttle base limitation would make the game more pleasant to play, while not having a negative impact on longevity. 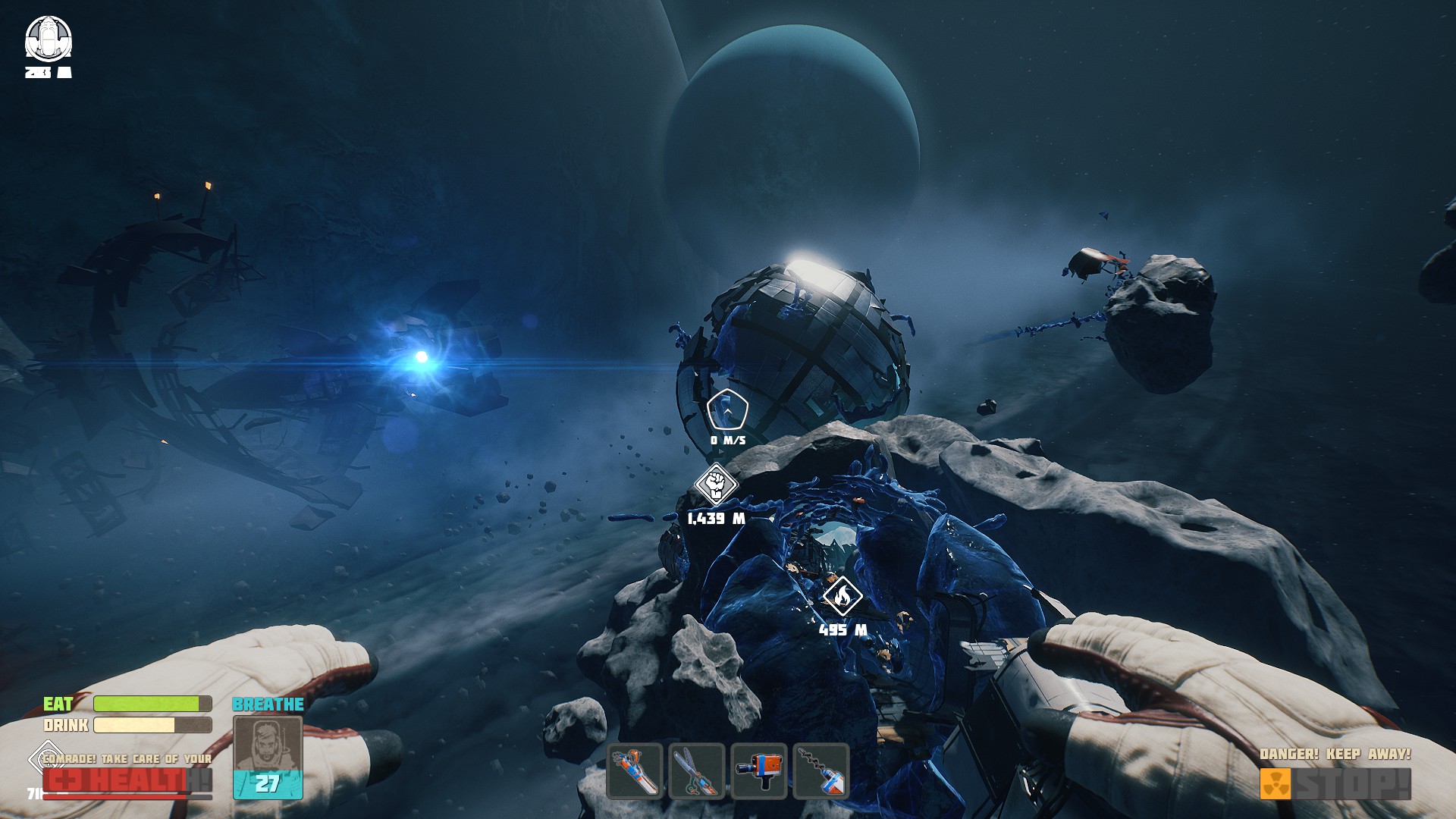 Breathedge‘s presentation is top notch. The graphics are strangely beautiful and the setting is graphically well realised, like a little bit of Bioshock in space. The voice work is professional and the sound effects and music are great. The game has some interesting ideas, too, and a great sense of humour. It has a lot going for it.

But after completing what’s available currently, I’m disappointed with the crafting and survival aspects, and I can’t help feeling as though most of the game world so far is just a pointless, empty distraction; I’d expect I could speed run through what’s here in an hour or so now that I know what’s required.

That said, the game is still in Early Access and the developers have hinted at a lot more to come. So far it’s very polished and has managed to keep me amused and mostly interested for a handful of hours; I’m looking forward to seeing what happens next.