After around seven years of development, a successful Kickstarter campaign, and even a name change, MoonQuest has finally arrived on Steam.

At first glance, MoonQuest might look like just another 2D sandbox game of the likes of Terraria, and while that is not necessarily a lie, MoonQuest aims to distinguish itself from the competition in multiple ways. For starters, while the core gameplay mechanics resemble those of a sandbox game, the level and world design, the endgame, and the gameplay loop, are much more similar to the recurring roguelite genre.

In a dying world, a being is summoned and is given the quest of bringing back the light to this world that is engulfed in darkness. This is how the game starts. The objective of the game is to find two Moonstones in order to power the Moon Machine, which should hopefully restore light to this moribund world. Besides that and a few lines that some NPCs spout off every now and then, there isn’t really much else to the game in regards to storytelling or world-building, which is quite a shame, given the fact that the game manages to create this extremely ominous feeling for most of the time. 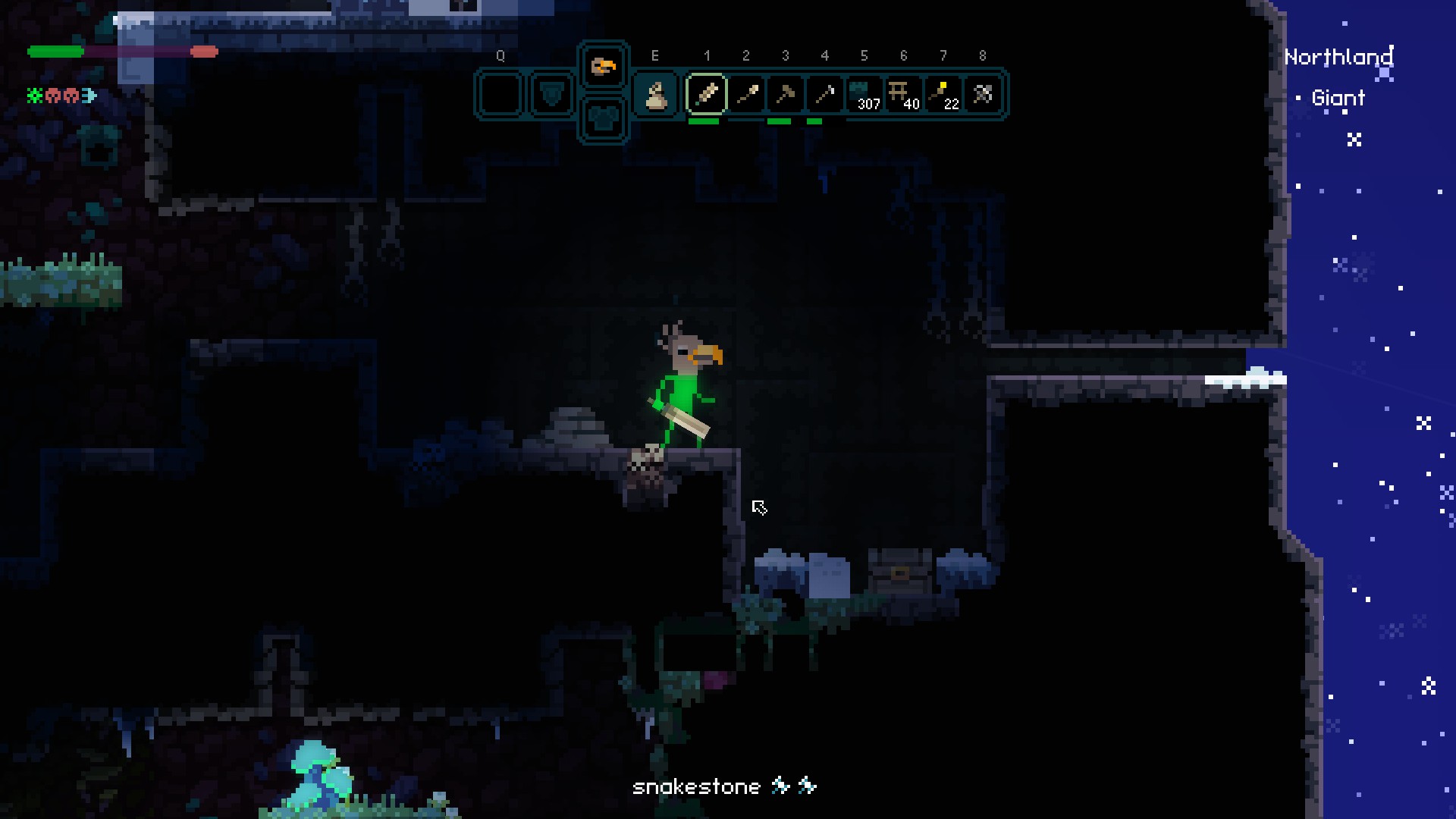 When starting a new game, there are initially four different characters that you can pick from right from the start, with four more that you can unlock by achieving certain milestones as you play. Each character has their own unique characteristics, which, in one way or another, might provide an easier, or harder, gameplay experience than others. For instance, while the Lemon is immune to wounds, the Moonman glows in the dark (which is pretty useful for navigating the underground), and the Elemental is able to detect ore. Still, these differences do not change the game in any particularly meaningful way, but if you really want to get the most out of the game right now, I’d suggest you play through it with at least two or three different characters to see if your experience varies noticeably.

While the game has a “Free Build” mode where you can mess around with building and do whatever you want, this isn’t really what MoonQuest is all about. I think that the best way to describe this game is as a mix of the resource gathering, building, movement, and combat of something like Terraria, with a much more streamlined world and exploration. While some games prefer to stuff everything into a huge open world, MoonQuest does it the other way around and presents itself through several different areas that are interconnected, while still generating a new random world everytime you start a new game. 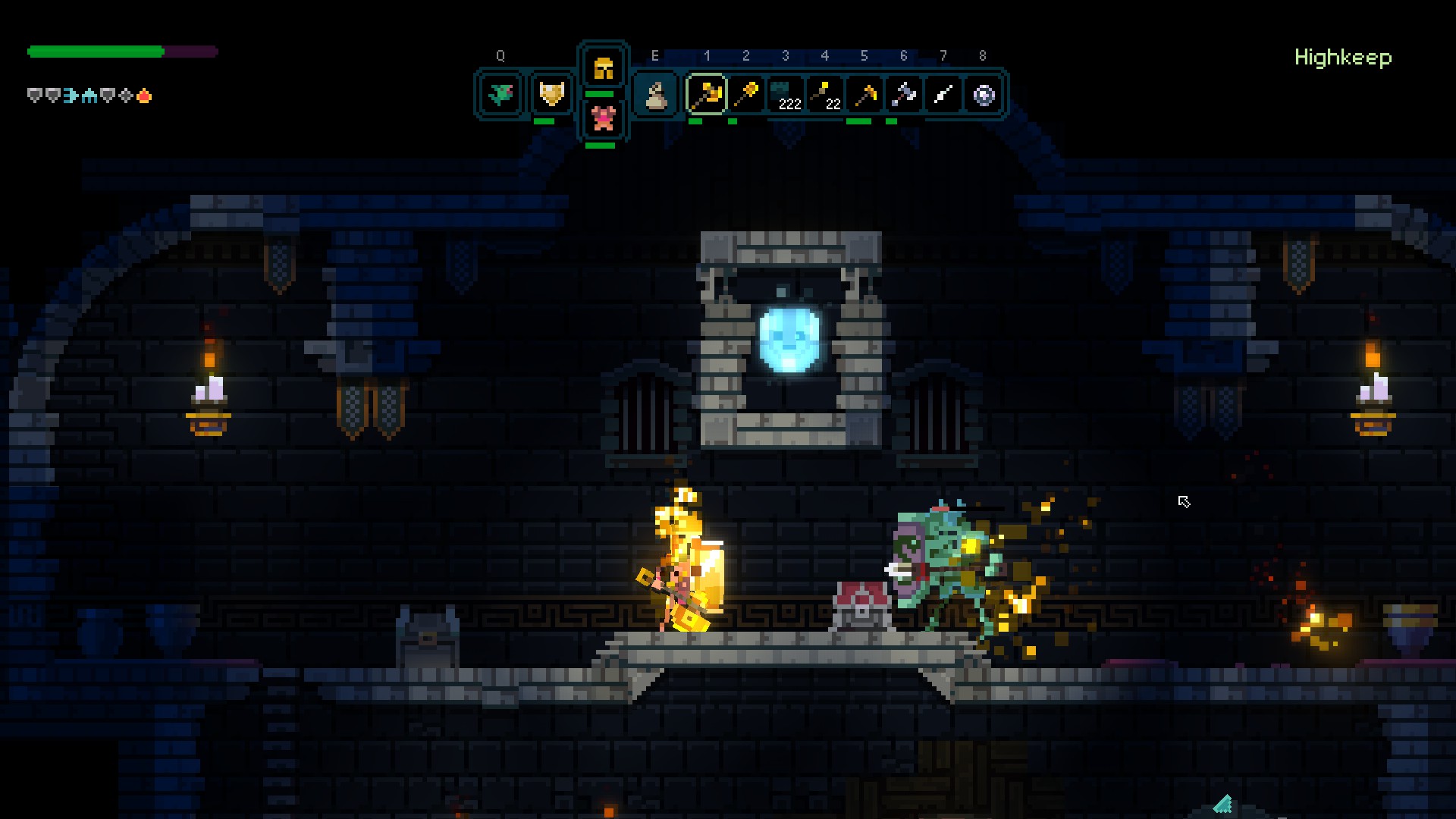 Despite the fact that the world is randomly generated, there are still predetermined zones that will always be present in every single game. The game just takes a series of tilesets, enemies, constructions, and environments, and arranges them differently each time. For the most part, the system in place works pretty well, but there were a few times where I was able to spot some oddities in the terrain generation system. Each zone is also considerably small, it’s not like you have an entire world to explore, as even the bigger areas (the ones outside caves), are barred by invisible walls on each side and the underground is surrounded by an unbreakable rock.

Resource gathering is a major element in MoonQuest, as you will start by crafting measly wooden tools and work your way up until you’re fully decked out in gold or silver. It is the pretty much the only viable way through which you can acquire better gear in order to be able to complete your quest. Tied to this is the crafting system, which, very much to my surprise, in its majority, it’s not done through your character, but, instead, you will find various NPCs and crafting stations, scattered throughout the world, that will allow you to assemble all sorts of different tools, weapons, and armour. 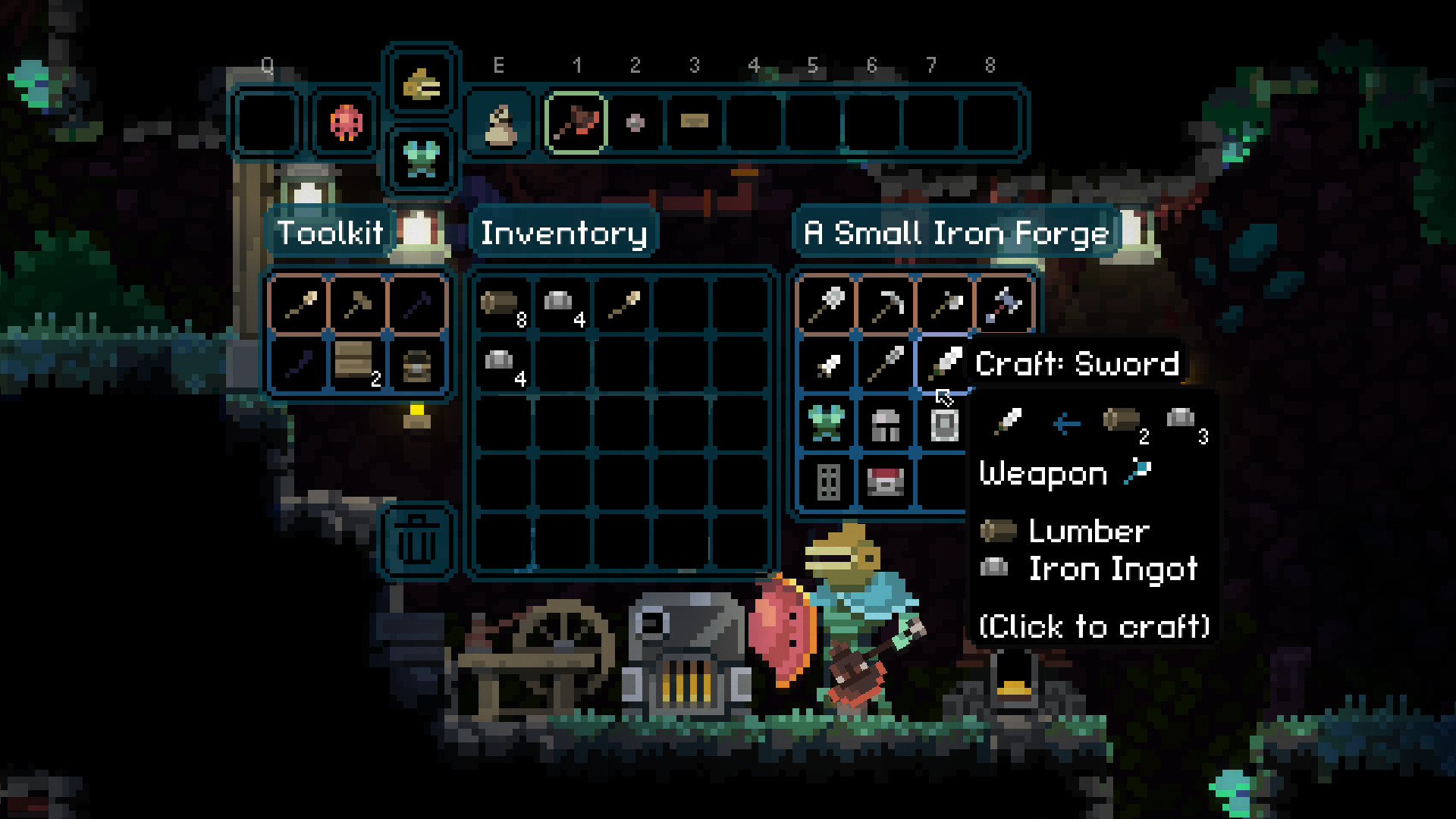 The game is pretty straightforward in the way it handles, as crafting can simply be done with the press of two buttons, as all you have to do is open the inventory/crafting menu and click in whatever you want to craft. From your inventory, you can seamlessly assign different items to your toolbar, as well as craft the most basic of tools, such as mini pickaxes, mallets, torches, shovels, or toolboxes. Likewise, placing down blocks, either for the sake of building or just for making platforms that you can jump onto, works just like in Terraria, where you simply select what block you want to place, and then you right click wherever you want it to be.

Although I can appreciate games when they’re simple enough so that complexity doesn’t get in the way of enjoyment, the combat in MoonQuest suffers from being overly simplistic. No matter which weapon you are using, be it a sword, a dagger, a battle axe, whatever, every weapon will behave in exactly the same way besides their range and damage. There is pretty much no depth to it, as all you’re going to be doing is swinging your weapon whenever an enemy is in range, and retreating a few steps or jumping over enemies everytime they try to hit you. 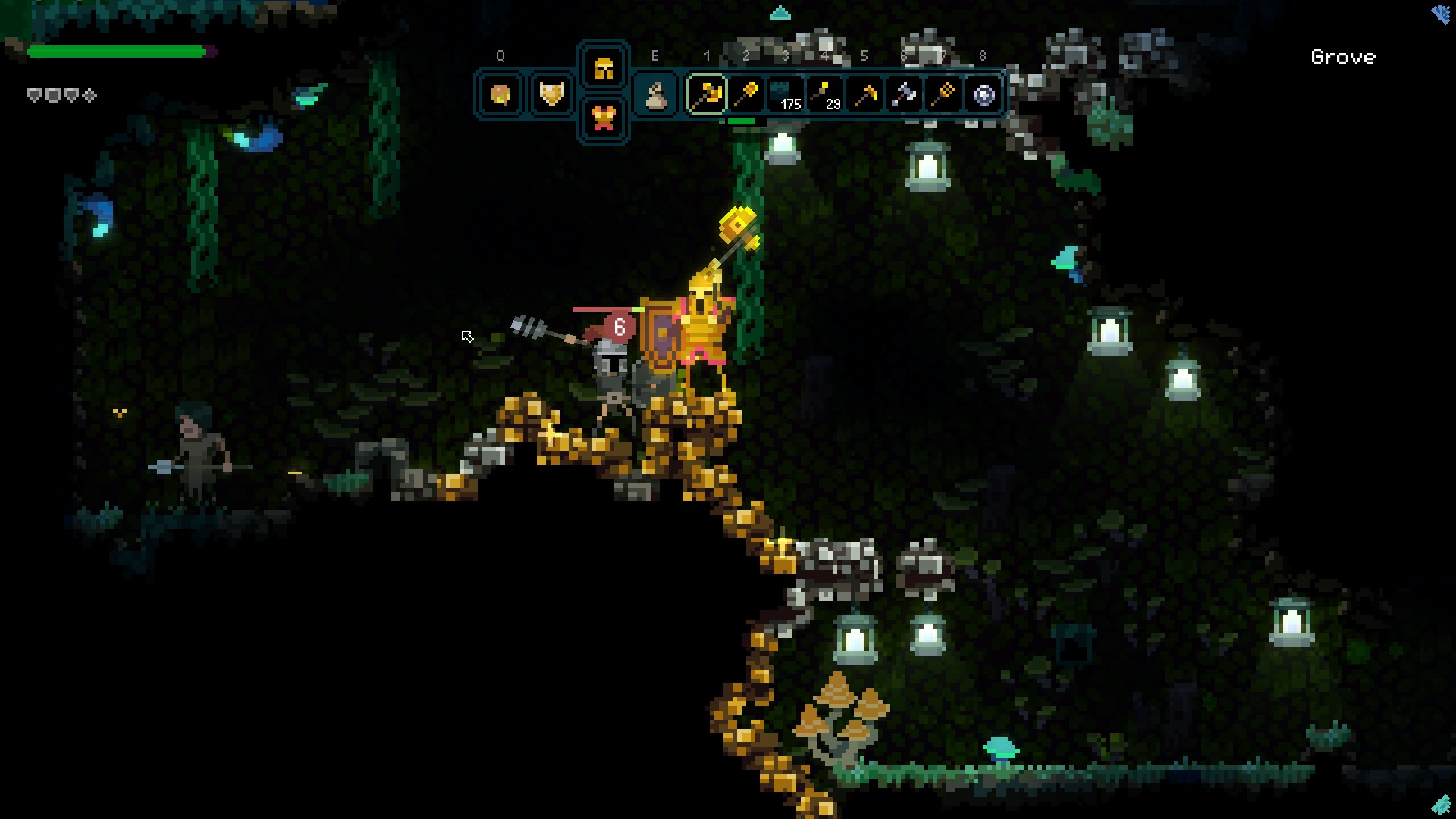 Speaking of which, the AI in this game seems to be all over the place. Sometimes enemies will come after you if you’re close to them, while on other occasions you will just be able to cheese them because they are simply standing still at a different elevation and they won’t do anything while you beat them to death. Likewise, neutral creatures also tend to not react whenever you attack them, thus embracing their inevitable death. It’s really a shame because when you combine the ability to exploit this with the oversimplified combat, MoonQuest leaves a lot to be desired.

I must admit that my first impressions of this game weren’t really that great. It was only when I finally decided to start a new run, that I came to the conclusion that I probably just had a bad world seed, as subsequent tries were met with a lot more resources and NPCs in close proximity, which tremendously helped me in starting off in the right foot. Another thing that really bugged me at first, while I was still getting my bearings, was the fact that it is often very hard to distinguish at the naked eye what each block is when you’re underground. This is mostly due to the lack of light sources, but thankfully if you hover the mouse cursor over a block, the game tells you what kind of block it is, and if necessary, what kind of tool you require in order to harvest its resources. 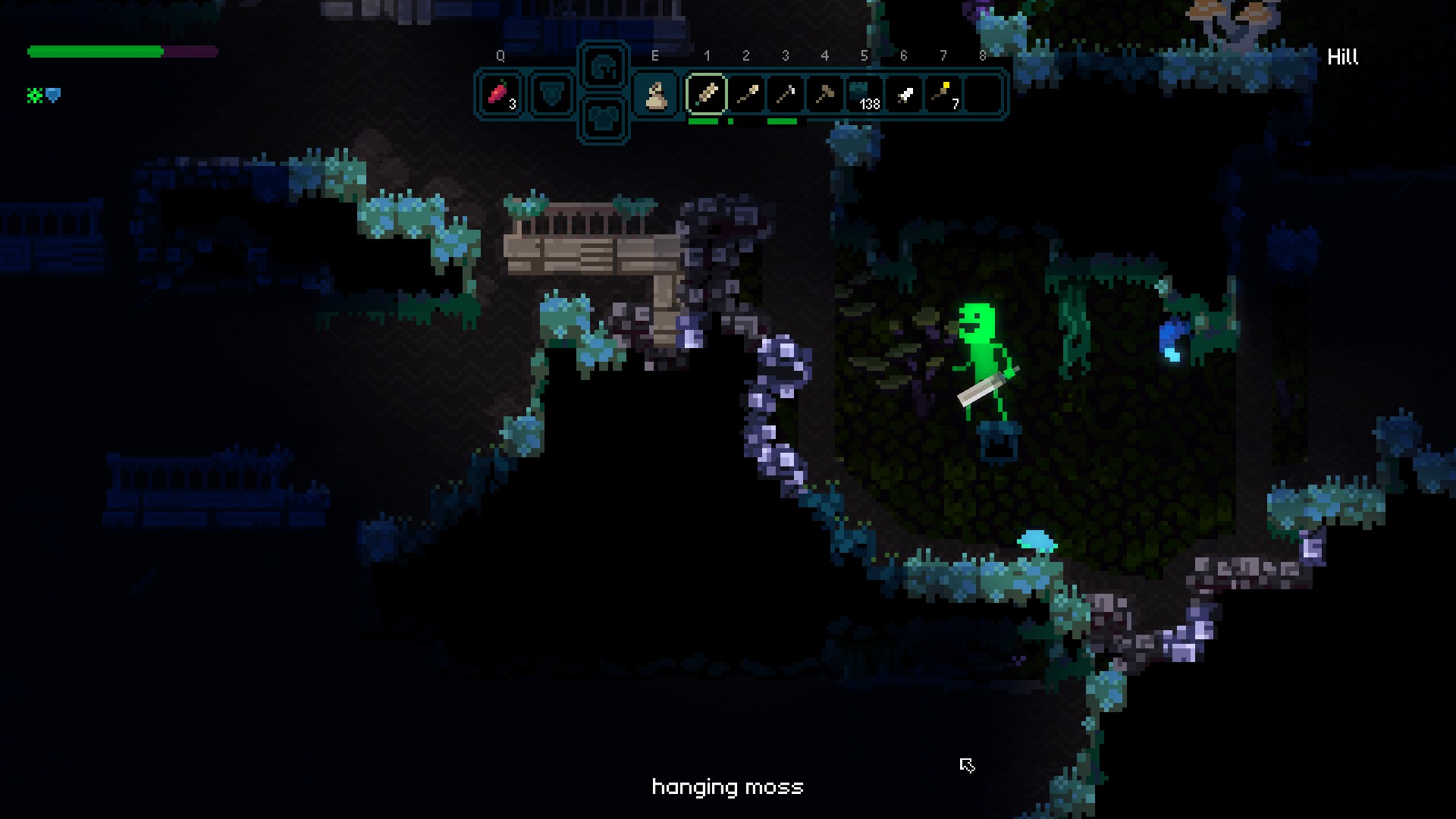 The fluids system in the game also behaves very strangely, as liquids such as mud feel as if they’re part of the background and are not actually simulated. Take the screenshot above, for instance, where you can see mud coming through two different ways, but the chamber that I’m in does not fill itself, the mud levels just stay there like in the screenshot. Besides all that, I’ve only encountered a game-breaking issue, where my game would just lock up as soon as it got to the main menu, and the only way to solve this whenever it occurred was to reboot my system.

This is not one of those games where you beat it once and you’re done with it. If you’re purchasing MoonQuest with that mentality, you’ll be disappointed, as you can easily beat the game in about 3 hours. This is a game where most of the enjoyment comes from completing multiple runs so that you experience all sorts of different scenery that the game randomly generates every time and the challenges that come with that.

However, I have to admit that after a few playthroughs, the novelty does start to wear off pretty quickly. With that in mind, I’m looking forward to seeing what kind of content the game receives during its Early Access phase, and I’d advise those that are interested in the game to wait a little further to see how the game shapes up.