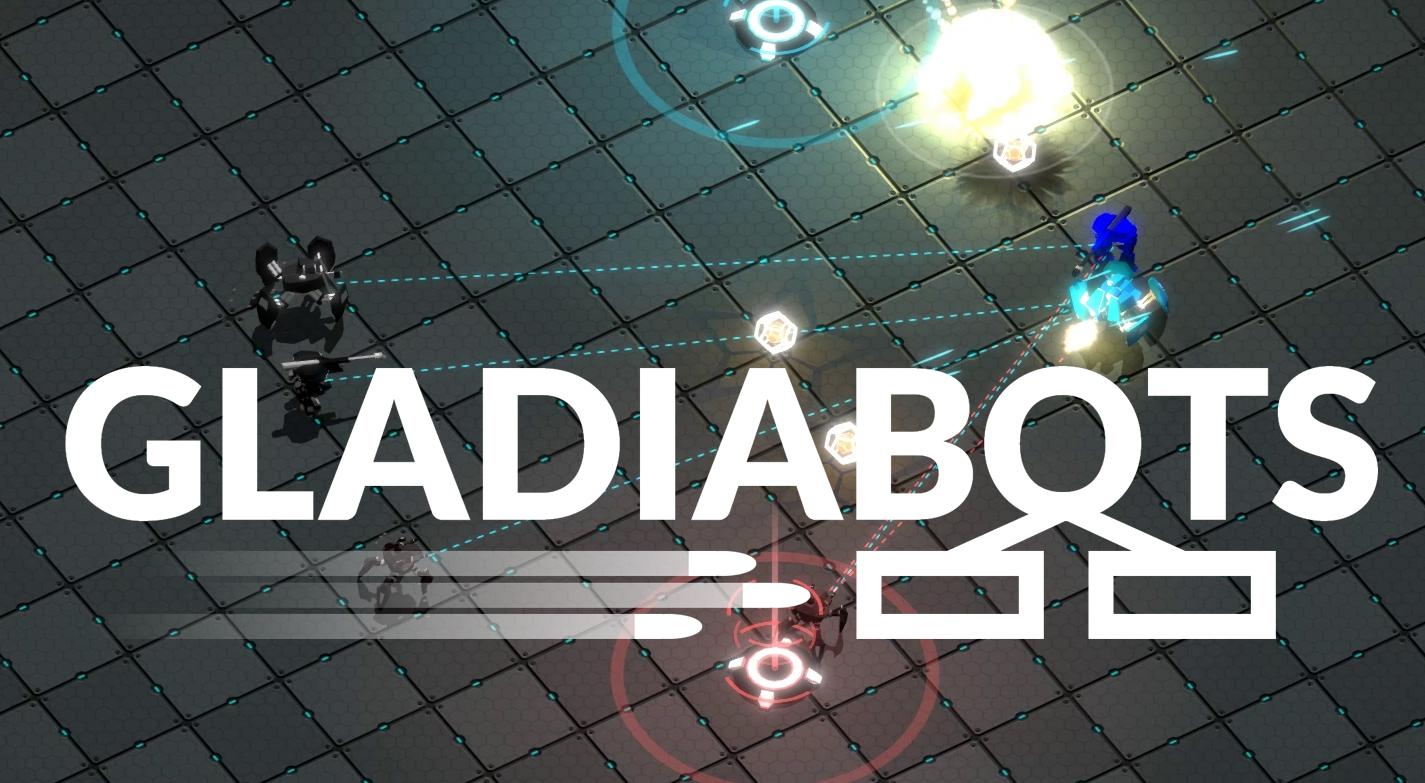 Have you ever pestered your own units’ AI in an RTS? See if you can do it better yourself, and participate in AI gladiatorial matches.

About a month ago, I pestered against Forged Battalion because the AI of my troops was not automatically targeting the enemy type they were good against, and I wished that I could find a way to program my units rather than micro-manage them. My wish has now been fulfilled as Gladiabots does exactly that: it allows you to program your robots beforehand, and then send them into battle while you just watch.

Preparation is most important

Once a battle has started, there is absolutely nothing that can be done but watch. You gave the wrong order and one of your robots is walking around in circles without doing anything useful? Watch in horror as you lose without being able to do anything about it. Likewise, no matter how many times you try the same matchup with the same exact programming, it will always play out the same. Leave your aiming skills and fast reflexes over your pillow, Gladiabots is not about that. The real meat of the game takes place in the menus in between battles. 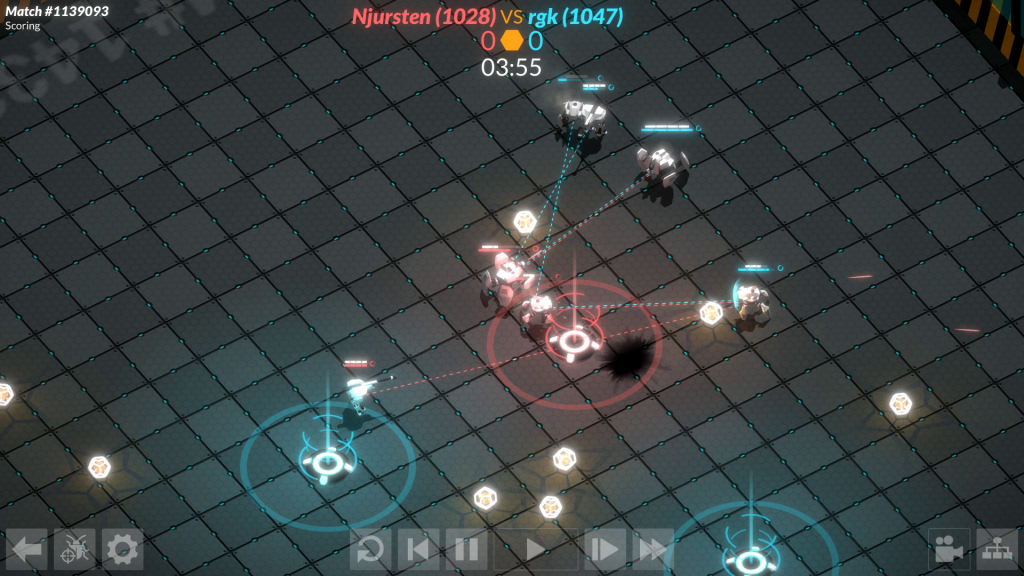 Gladiabots has a very accessible visual interface to code the AI of the bots. You simply drag your mouse to create lines or move little signs that represent an action or a condition. It all works on the simple “If – then” principle, combined with a priority order. The robot will try to execute orders from left to right, which means that it will look for the first thing it is allowed to do according to your leftmost programming. For example, “If my shield goes under 75%, then I should drop the resource that I am carrying, and then I should flee from my attacker”. This mechanic is very simple, while still allowing for very complex conditions. Just pick from what’s on offer! Point the enemy icon, and then, after that, you can detail it more by ticking boxes with visual cues for quick reading “At close range – At long range – Closest to me – That belongs to a specific robot type” and so on. Or cumulate the conditions, or tick another box to invert them “That has the lowest health and is not fleeing”. Thanks to its visual interface, please believe me when I say that the game is much easier to understand and use than it is to understand this paragraph that I just wrote. 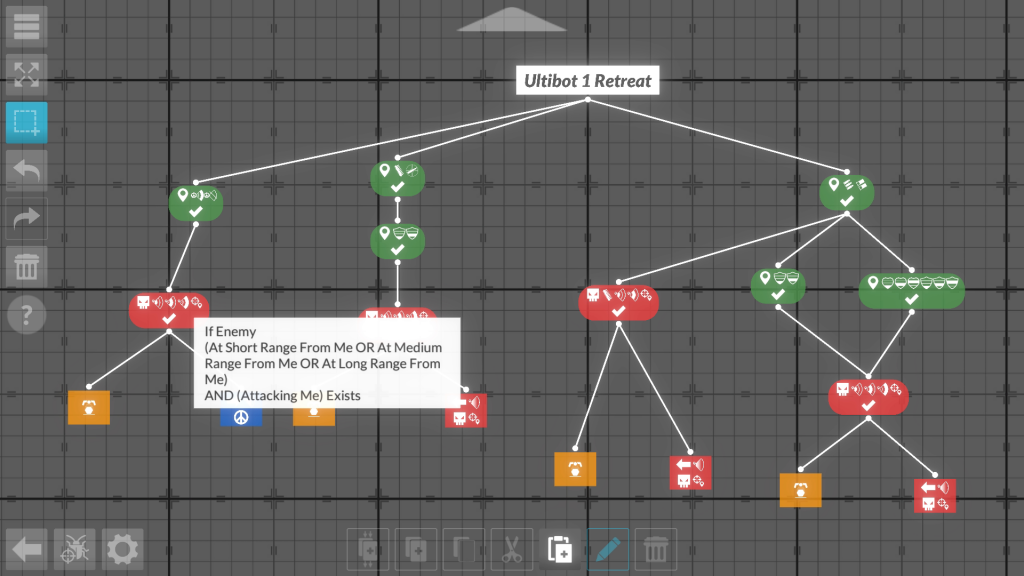 To simplify your work, you can regroup some functions into modules (retreat orders, attack orders, resource capture orders and so on), and then create a single entry in which you incorporate the modules you use, and very quickly browse through them to edit your orders. Then you go into battle, observe your robots and decide what could be improved. Even better, during a battle, you can click on one of your robots (not enemies) to check out which orders are being activated! Don’t hesitate to pause the game or decrease the speed of the battle if you want to have a more careful look, for instance, if you don’t understand why one of your robots keeps dropping an orb instead of scoring it. 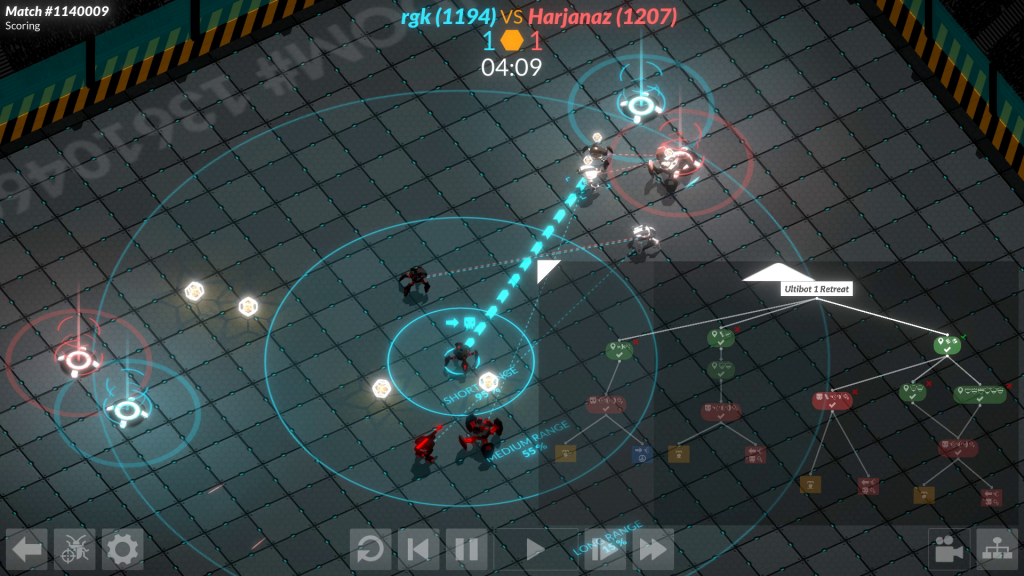 When going into battle, it is possible to choose which bots will form the squad. You have the versatile assault class (the only type of bots that is not limited to one per squad), the sniper, the heavily armored but slow machinegunner, and the quick but weak shotgunner. You can customize each with a unique style (points let you unlock new colors) or AI. However, you don’t actually need to give each one a different AI, you can include class decisions in your multi-purpose programming (“If I am a shotgunner, then I will look for the closest resource”). 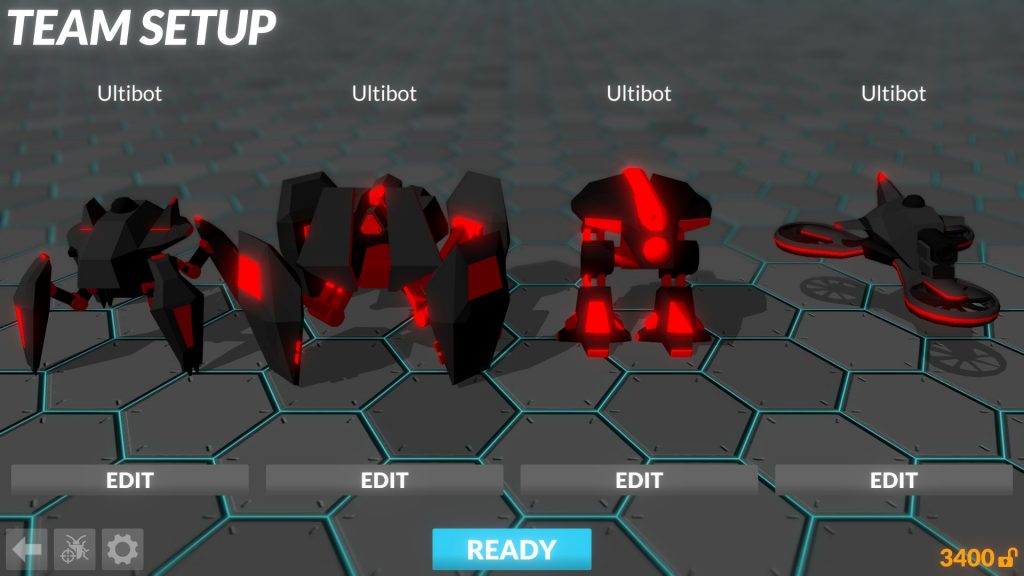 You might want to start the game by playing the tutorial missions, which are very well put together in order to easily understand how everything works. Afterward, if you don’t remember something, you can quickly replay the little section that you were looking for. Then you might want to start playing the campaign missions a little bit to test the waters before you finally launch yourself into the best part of the game, which is the online play. Interestingly enough, since people do not need to be active during fights, the battles are asynchronous. The game picks someone with the appropriate ELO level and your AI fights their AI and that’s it. Which means that it absolutely does not matter whether other people are currently playing the game at the same time, as matchmaking will always deliver within a second. You can even play with your friends while both players are not online at the same time. 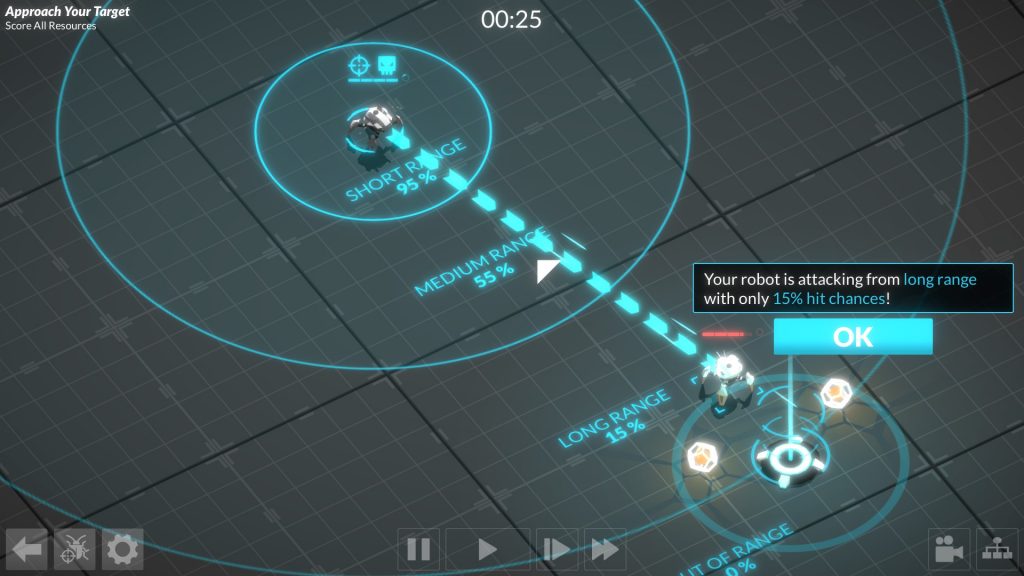 There is something addictive about watching match after match and climbing the leaderboards, and then you eventually hit a skill ceiling that your AI cannot get past. You then observe the behavior of enemy robots, or find out if something is wrong with your AI, and then tweak a few things here and there. Some small changes can have huge repercussions, perhaps even catastrophic ones, or maybe you climb to the next league. Since you can fast forward a match, you can play a large number of games within a very short timeframe. It’s super addictive. 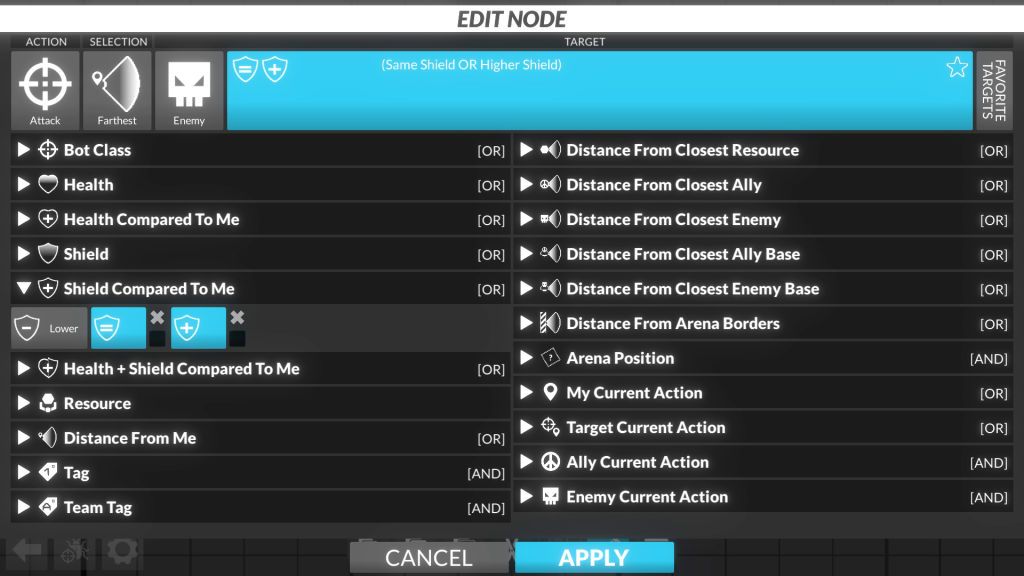 The game is still in early access, but I never felt that the game was unfinished. Ok, if I want to complain a little, sometimes I received the result of the match before I finished watching it, which hindered my enjoyment. Sometimes the shield and health bars would also disappear, which I then linked to my activation of Nvidia’s Shadowplay to record footage. I could also note that the arenas are looking a bit austere, but at least everything is perfectly visually communicated. 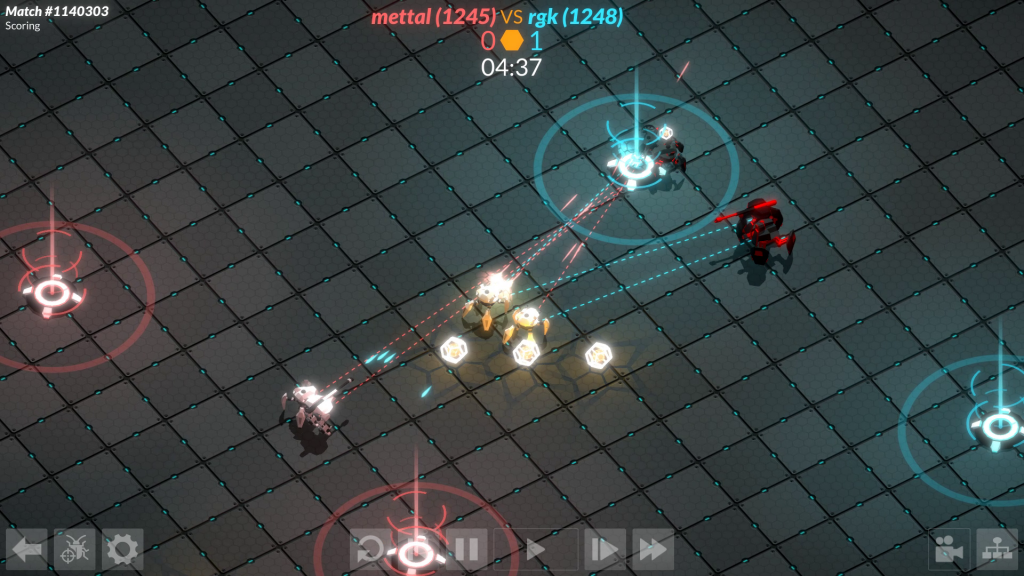 I’ve kept one slight hiccup for the end since I did not want to scare anyone from taking an interest in the game. While editing the AI, everything is so simple that it’s like a dream, but there is one huge difficulty spike. It happens right after playing the very good tutorial, as suddenly the players are left to their devices without a comprehensive blueprint to build from. Starting from scratch is daunting, and for that reason, I kept the game on standby for two weeks. I tend to find playing games relaxing; however, building my first AI was anything but. I wish it was possible to work from a good simple one at first or use a link shared by another player. What I ended up doing was to look online at what other people were doing, I took inspiration from them and then worked from there. So, if you want to start this game for the very first time, right after the tutorial, look up other player’s AIs on Google or in the forums, and then get swallowed by that very interesting world with players discussing tactics and their own little ways to program their AI. 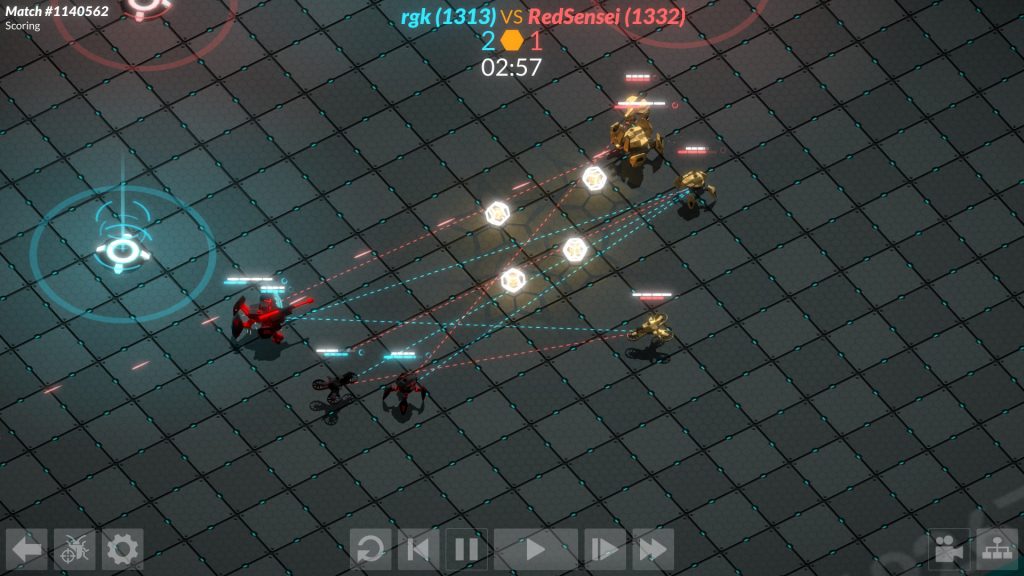 Gladiabots is without a doubt a little gem. If you have pestered about AI in an RTS game, here is your chance to do better, and it’s easy! The possibilities are incredibly exhaustive, while the interface is surprisingly smooth and accessible. With such an excellent work on the interface, the developer GFX47 can’t be praised enough for turning to programme an AI into a nice and easy drag and drop system. The real difficulty will come in figuring out a design for your AI. Once the hurdle of creating your first one has been passed, it’s really fun to fine-tune little things here and there. Did you get a new idea? There is nothing stopping you from quickly giving it life. Finally, the asynchronous multiplayer will never suffer from a lack of players online while being straight up addictive. Call someone over, grab a drink, and watch together how well your squad performs – it’s like watching a deadly football game where you are the manager of your team. A very controlling manager.