A difficult to remember name will be the least of the problems for Wonfourn. Is there more to it than its overabundance of generic unity store assets implies? Sadly, not enough to justify the cost.

Using a Dust Cover to Hide the Damage

Let’s address the elephant in the room right off the bat. It is immediately clear from the screenshots and trailer that this is a game made up entirely of asset store objects. Apart from the ugly aesthetic that results from this, it does not inherently make it a bad game. The game’s trailer shows off some interesting if vague gameplay features that give the impression it may just be a decent RPG the likes of which are greatly lacking on the VR platform. Some low poly models would be a small price to pay if that is the case. So, should you judge a book by its cover? Probably not but sadly, in this case, your gut instinct is on the money.

Wonfourn is bad, there is no getting around it. The trailer I mentioned is just careful cuts to the make the game appear to be more than it is. It is in fact exactly what it looks like, a shallow and empty Unity playground devoid of substance and polish thrown together on the cheap. Is it completely meritless? No, some of the ideas the developer had do have real potential. But an empty field has potential, it could be a temple or swimming pool or a skyscraper with some work. Wonfourn is not in early access, it’s a fully released game, and it is still pretty much an empty field. 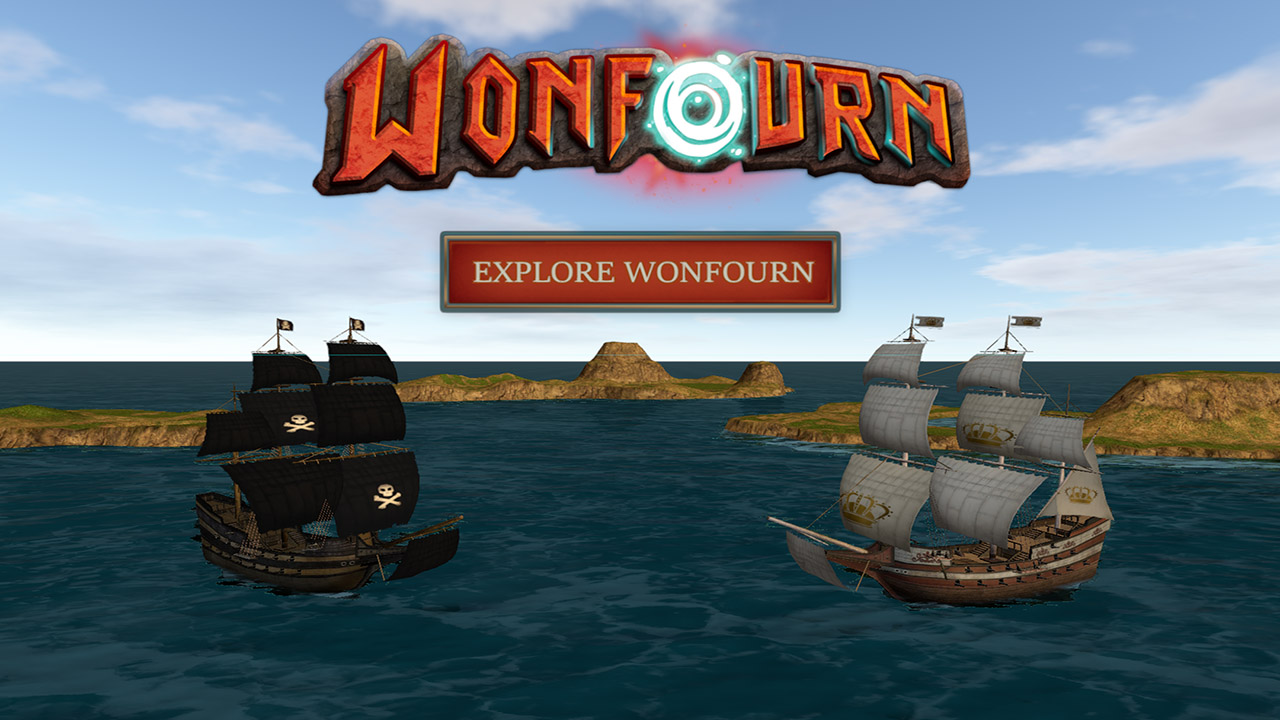 Almost literally. 95% of the game world is void. The game is set in a big featureless ocean dotted with 36 more or less identical islands with each containing a more or less identical town with different NPC’s standing in different locations. There is no real in-depth story here. Each NPC mostly acts as a menu node for starting one of the games various types of minigames and quests. The reoccurring town is way larger than it needs to be, requiring a lot of wandering to get from point of interest to point of interest, which is even more frustrating because the town is otherwise devoid of feature or function. The whole town could be replaced with a menu prompt and nothing of value would be lost.

It leaves you wanting more, like being offered an empty bag of chips…

That is unless of course, you bought the game to ogle at the overly sexualized female NPC’s which is what the towns seem to really exist for. I’m not one to complain about that kind of thing but it is obvious from the marketing they were pushing the sex sells angle. The majority of NPC’s were clearly selected to be eye candy and that might have mattered if it wasn’t for the fact that that is all they are. You can’t really interact with them, they don’t have anything interesting to say and you can’t even get close to them to give them a good VR ‘examining’ if that’s what you want to do… Which honestly, if that’s the experience you are looking for, no judgement, but there are better free games on VR for that anyway. In Wonfourn it’s just yet another thing that looks incredibly out of place. 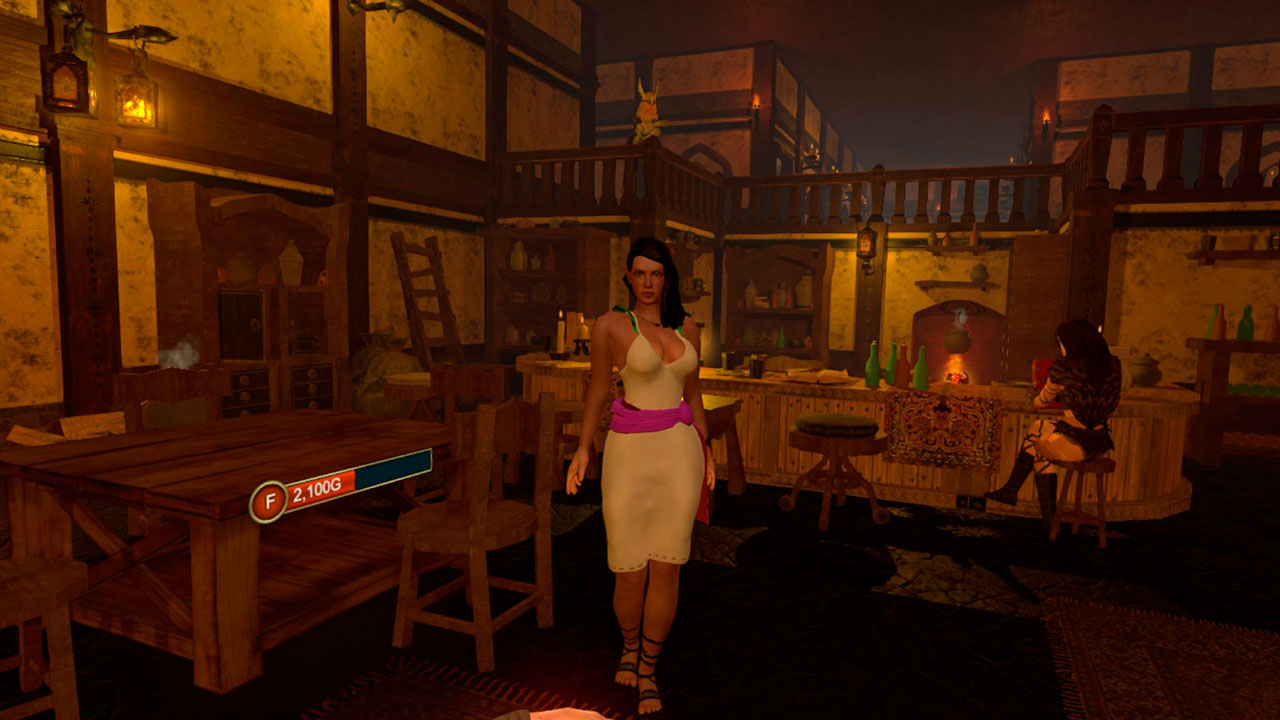 As to what the game actually offers, the objective of the game is to raise a certain amount of gold, you can pick from three difficulty modes which all appear to be the same but with a higher goal for the amount of gold you have to play, so they basically boil down to how long you want to spend grinding in the game. To raise gold to meet this goal you can trade goods between towns and do quests which mostly boil down to go here and do this and completing the various minigames. The game advertises six nations to choose from. Each having a single unique quest associated with them which is all that really amounts to what the game has to offer in the way of a story. In the first patch after launch, all six of these quests have now been made available to all six nations in an effort to give players something to actually do.

The trading is pretty straightforward. Sail to a town, wander to the shop, buy things that are cheap then sail to another town and wander to the same shop in that town and sell the things that sell for more in that location. Just to be clear it is the one shop for every type of good and there doesn’t seem to be anything dynamic about the pricing. You aren’t competing with other merchant ships for supply and demand. So it is just mindlessly sailing from place to place, waiting through 4 loading screens and clicking on some menu buttons over and over. 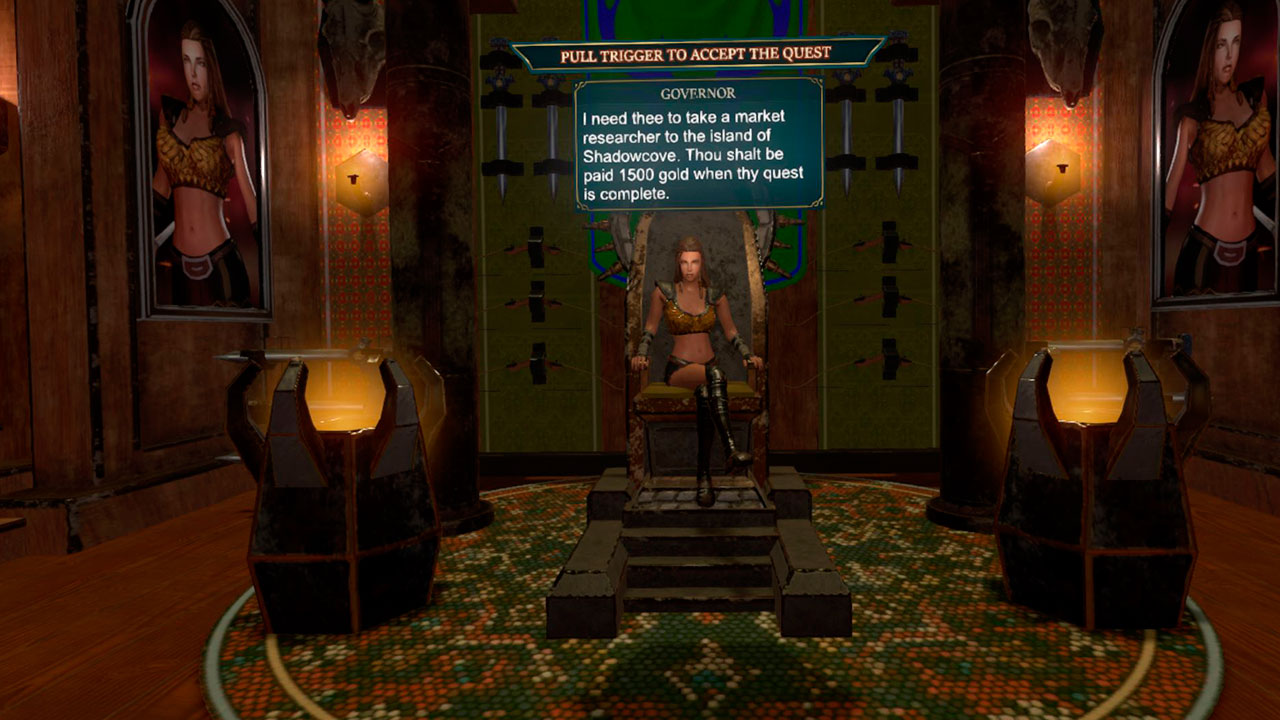 From there you have five minigames that make up the actual meat of the game. Archery, Spear Throwing, Jousting, Blacksmithing and Pirates/Sea Battles. Each of these is more broken than the last and none of them are worth buying the game for.

The Faux Meat of the Sandwich

If you’ve played The Lab, Valve’s demonstrative mini-game ensemble that is free to everyone that uses a VR headset through Steam, then you know exactly what to expect from the archery. In fact, Wonfourn’s tutorial literally rips out and uses the dummy target and balloon models from The Lab’s Long Bow minigame. Apart from that, it is pretty much the same wave shooter but much less interesting and stylish. It is however notably more buggy so at least I guess you could say they added something to experience. 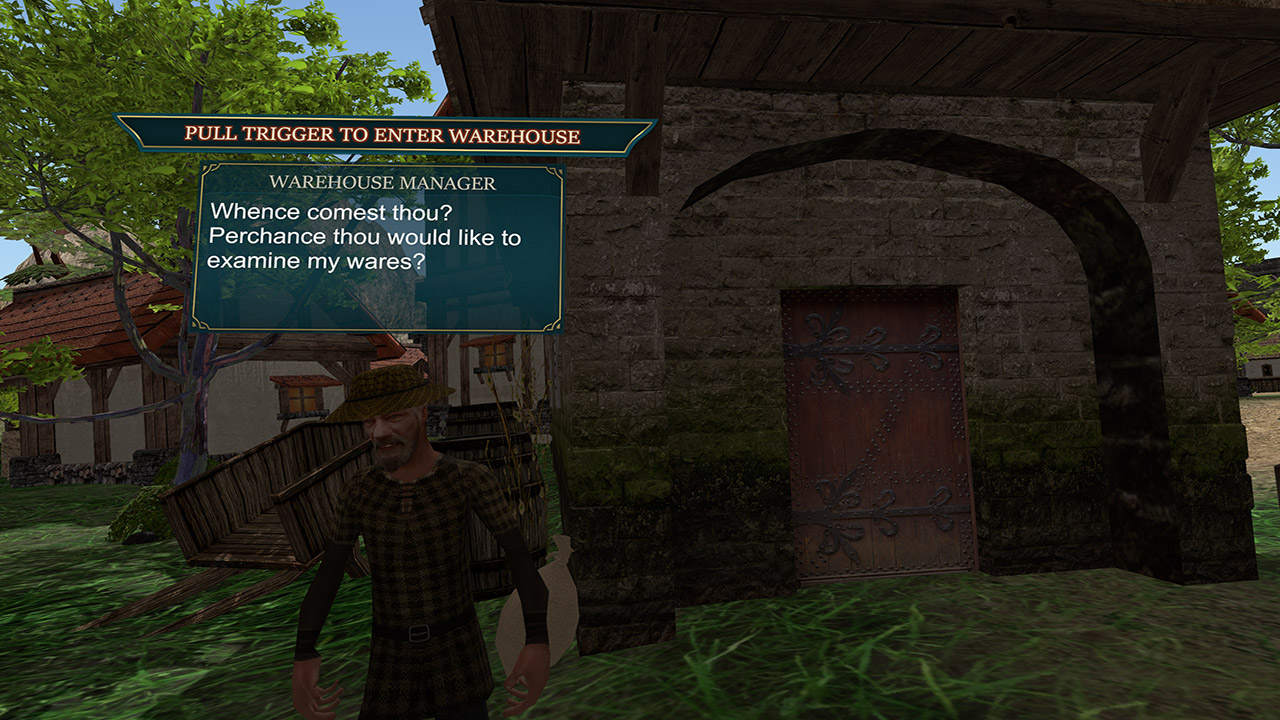 Spear throwing is probably where most of the work on the game went. You are basically placed on the back of a horse that runs forward at a steady pace and never turns, making this the most on-rails shooter experience you will ever have. The straight course is filled with targets and orcs that run around you as you have to hit to earn varying amounts of gold. To do this you pull the trigger to summon a spear to either hand, swing your arms and release the trigger to throw. It almost works well, aiming the spears works in more or less how you would expect except the physics of the throwing arc is weird.

As far as I can tell it’s not based one to one on the movement of your arm like you would expect. Rather there are three speeds the spear can be thrown with and when you release the spear it releases at whichever of the three speeds your swing was closest to….this would be tolerable if each of the three speeds didn’t also release the spears at different heights above your hand. The process goes something like this, pick a target, aim at it, throw… Get the aim right but severely undershoot because the spear wasn’t going fast enough to have the range to reach the target. Make the same shot again but swing harder… Overshoot because the shot didn’t just gain range, it gained a couple of feet of height. Aim again but this time swinging harder and aiming lower to compensate for the spear lifting… Oh, you’ve ridden past the target. 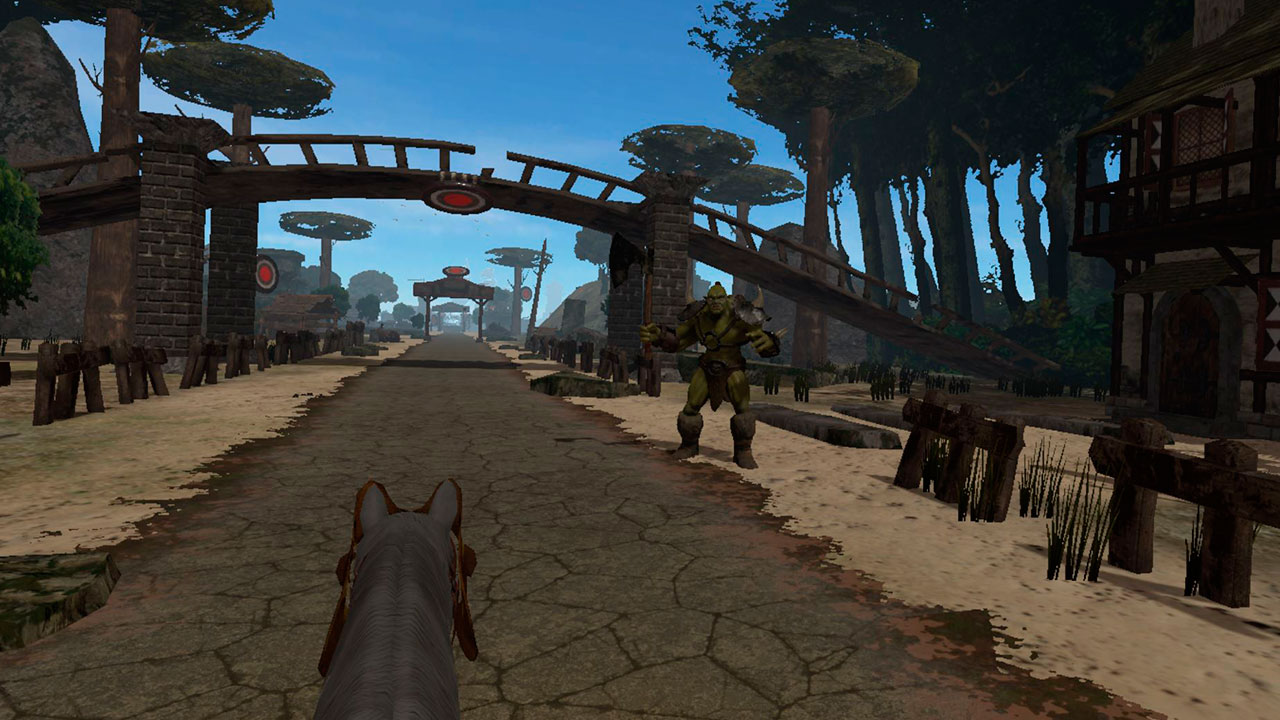 The jousting made me genuinely sad. When the minigame loaded I was excited. I saw the amazing potential for what was presented to me. VR was made for a jousting experience. Then my horse started riding forward and the same anaemic fixed rate and as my opponent approached I immediately realised, the lance was not tracked to my controller. The lance was not bound to the Vive controllers motion whatsoever. The lance is bound to a random position in your field of view, you adjust the position of the lance to the centre of your field of view by swiping the trackpad and continue to do so to adjust for its random wobbling while looking at your opponent. That’s all there was to the jousting, there was no variable in horse speed or position. The entire experience is literally just sitting there and twiddling your thumb. A tragedy that makes me long for a real VR jousting experience in the near future.

Blacksmithing is started by walking to the blacksmith NPC next to his shop in the same corner of every town. You will then be placed inside next to a forge and an anvil. On top of the forge is an already warmed up blunt sword and next to the anvil is a hammer. The idea is to grab the hammer and sword, place the sword on the anvil and hit it a few times with the hammer before placing it in a barrel of water on your left completing the sword and earning you five gold per sword.

The sword and hammer immediately respawn as soon as you pick them up and that is just as well as the grip mechanics in the minigame are totally broken. It’s a shallow experience to begin with but it is transformed into agonising torment by the fact every time you pick up the sword and the hammer they will tumble uselessly to the floor as soon as they brush another object, including the pile of swords and hammers respawning where you just dropped them. If you actually manage to get a sword on the anvil with a hammer in hand you must gingerly tab it. As properly hitting it will make the hammer and sword fly off and you get to start all over again. 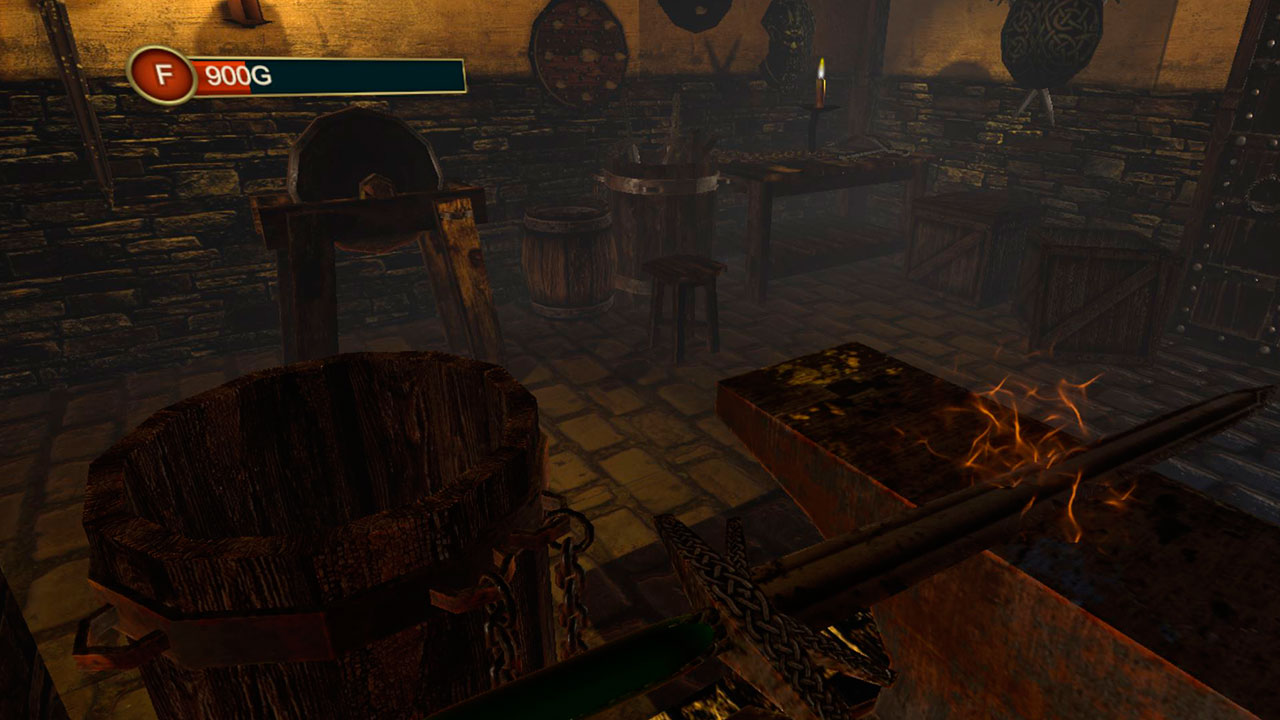 The ‘sea battles’ are by far the most broken feature. Attempting them in the tutorial just results in an error message. When they do work it’s pretty much press forward to go forward and steer with left and right, there is no wind or actual sailing element. Drive up beside another ship and fire the cannons on that side. I didn’t notice any physics here, if the ship is in front of the cannons it takes damage and eventually bursts into flame. Disable all the other ships on the map this way and… Nothing. The win condition never triggers, so you are forced to escape out of the scene for no reward.

When all was said and done there wasn’t a single thing about Wonfourn that did make think either ‘I’ve already played a better version of this’ or ‘I wish there was a much better version of this I could play’. You can see a little bit of thought was actually put into some of the scenes before they were copy and pasted everywhere. It has all the hallmarks of a product made by someone who has great aspirations only to realise they were too much work to accomplish. The problem is they decided to sell this by pitching those aspirations to consumers, so now they must face the shame of unfulfilled expectations.

I went into Wonfourn wanting to give it the benefit of the doubt. It has a difficult to spell name and visuals that are going to turn off most people immediately. All in all a very difficult product to market. I wasn’t playing it long before I realised this was for the best. The harsh reality is the devs are asking consumers to pay 20 times what this product is worth.