Do you yearn to be the next Richard Branson or Elon Musk?. Why put your hard money on the line. A smarter and more relaxing way, would be to create your own virtual business empire. With Rise of Industry you can do just that! Read on..

Rise of Industry is a strategic tycoon game that puts you in the shoes of an early 20th-century industrialist. Build and manage your growing empire in a living, breathing, and procedurally generated world that is constantly evolving and adapting to your playstyle.

As a budding entrepreneur, you will build factories, construct efficient transport lines, move raw materials, produce finished goods, and arrange trade with the world’s developing cities, providing them with the resources they need to flourish – for as they grow and prosper, so do you.

Designed with an eye towards both accessibility and depth, Rise of Industry has enough strategic complexity and replayability to satisfy the most experienced fans of the genre, while its simple-to-understand mechanics ensure that new players will love it as well. 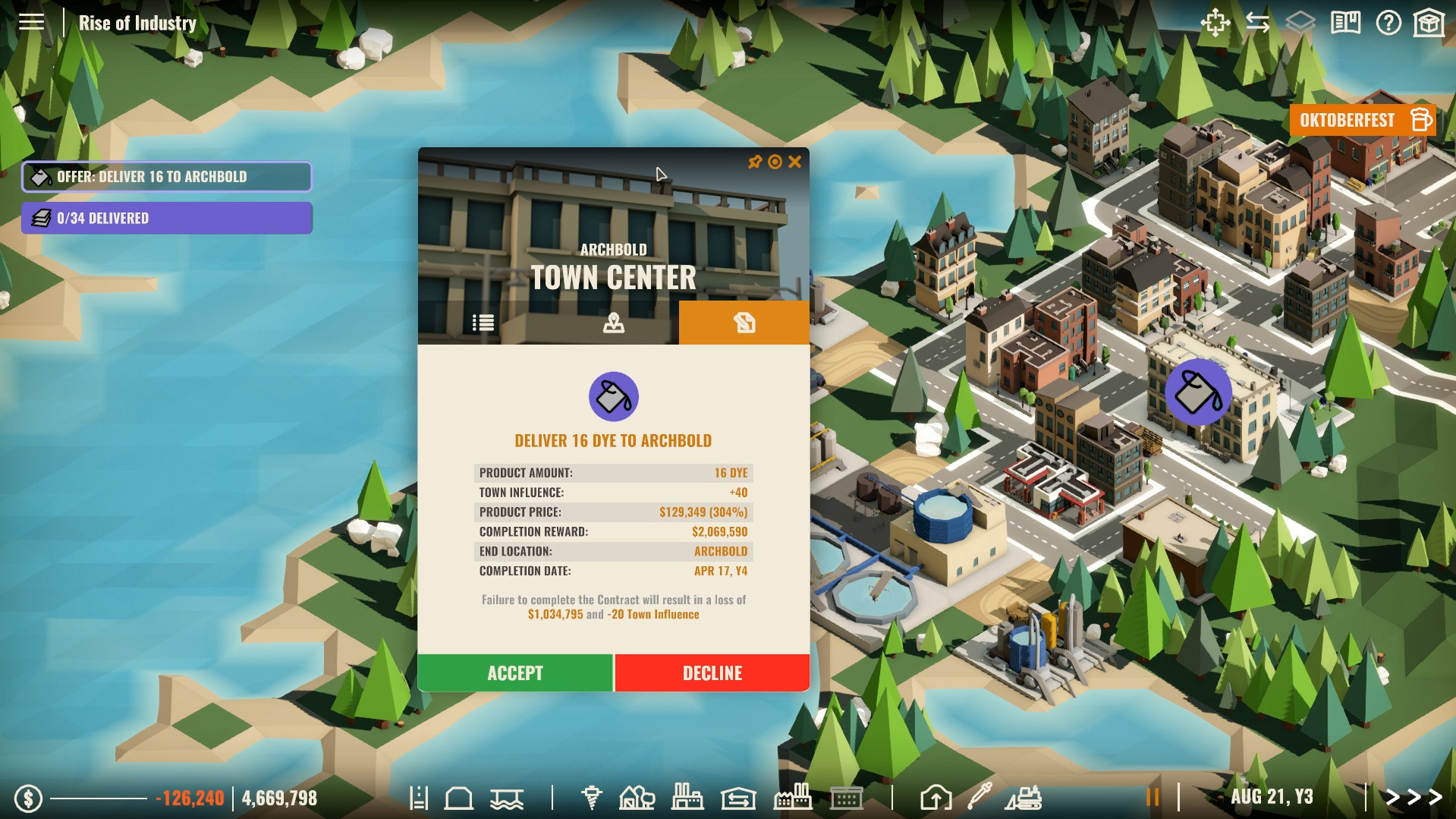 Rise of industry is developed by Dapper Penguin Studios, based in Madrid, Spain. The project has been picked up by Kasedo Games ( the digital-first division of Kalypso Media). It fits perfectly into their portfolio of strategy titles, such as Project Highrise, Tropico, Railway Empire and Patrician. Given that the title was the top-selling game of 2017 on Itch.io during its initial design phase, it was a no-brainer for the publishers to put their weight behind the game.

ROI is a deep and complex strategy game. You are the boss of your own logistics firm. A Virtual Tiny Rowlands, Philip Green or even Elon Musk! Your mission is to build an industrial empire that manufactures and delivers products to a dynamic and growing population. If you have ever played OpenTTD, Railroad Tycoon or any of the classic Industry sims of the late 90’s then this game is the modern take on the genre.

On booting up ROI for the first time I was struck by the newbie friendly nature of the main menu. For such a complex title that deals with micromanagement of logistics in order to succeed in your goal, this is most welcome. There is a 3 part texted based tutorial which starts with the very basics of tycoon game mechanics, this moves on to R&D and production lines. Finally, you are shown the ropes of how to set up trade routes and warehouse in different cities.

Also embedded into the interface are two youtube links. The first is a 5 part video Beginner’s Guide by Gonumen. This covers all you need to know to get your fledgeling empire rocking if the official tutorial is a tad dry for your tastes. Lastly, there is a 10 part let’s play of the new Alpha6 build showing all the latest gameplay tweaks and additional features. This has been created by youtube strategy specialist, KatherineOfSky.

Clearly, the devs know it is paramount for the game to succeed that everybody from newbie to veteran knows how the various game systems work and function. Back in the 90’s all your had was a weighty manual and your smarts. Dapper Penguin has cleverly leveraged all of today’s connected content in order to enlighten their community with all the knowledge they need to enjoy the game.

On my first career playthrough, I was consumed by my own hubris. I had this high falutin dream of building a pizza empire. I wanted to be the new Doctor Oetker. I wanted to gazump Papa John. This was all well and good. I ploughed money into a logistically ornate supply train, producing my own tomatoes, wheat and dairy products in order to furnish my master plan. Unbeknownst to me, the good people of Apple Canyon Lake were not into Pizza! Who’d have thunk it? I don’t know anybody who doesn’t like pizza. I was haemorrhaging money as my stock filled my warehouses with an unwanted product. I had learnt a valuable lesson in basic business practice the hard way. Only produce what people want NOT what YOU think they need. Newbie tip number one. Always, always check out what your starter city citizens desire and build your embryonic company around these needs. It’s easy to do. Simply click on the local farmers market or hardware store in your nearby conurbation.

My second attempt was more successful. I surveyed the available burgeoning townships and found a diner in need of orange juice and potato snacks. Nearby was a farmers market which pined for fruit and spuds. Sweet! I targeted my production to fulfil these needs. After a few faux pas with my truck logistics, I slowly started to produce a small profit. Looking ahead I decided to commit my R&D budget into the fizzy pop market. I knew the local diner would be the perfect customer for this new line. Water assets were being pushed to the limit so I invested in more infrastructure to meet the demand. Slowly the game was sucking me into its web of high-level business strategy. Soon I’d be wearing red braces and sporting a daft “manbob” hair doo. Gordon Gekko! eat your heart out. A true captain of industry was my goal.

Besides the de facto career mode there is a sandbox alternative. Here you are free to improvise and trial any business or supply line blueprints, without the pressure of money or competition worries. This is the ideal arena to hone your skills on new product prototypes which you can take into the real simulation once mastered.

For once on a Unity-powered title, there is a wealth of quality of life options. From gameplay tweaks to a host of graphical, sonic and control options. ROI has most bases covered. Even little things like skipping the intro movie have been added. “Noice”.

ROI has an elegant simplicity which underpins both the graphic user interface and the overall tone of the project. There’s no ornate flourishes and visual whizz-bangs. Everything is done with a clean easy to read fashion. Font choices and colour schemes are neat and businesslike.

The terrain in which you build your empire upon is suitably refined and unfussy. The low polygon trees reminded me of David Braben seminal Zarch / Virus. I love this clean aesthetic. To be able to convey buildings and commercial structures with limited graphical fluff requires discipline and a craftsman’s eye for detail. Given the game isometric viewpoint, there are also nods to both Populous and Cities Skylines. This is not a bad thing. Any game that channels this classic game design gets my seal of approval.

The original soundtrack harkens back to the classic Sim City 2000. For me, this is the high water mark for strategy music. Understated yet compelling, strident without being grating. The composers have hit the sweet spot. Lilting solo violins, flutes and french horns transmit the main melody, These are underpinned by pizzicato strings and mellifluous orchestral sweeps. Top quality light classical pieces which fit the genre perfectly, Not too rowdy to be annoying but just enthralling enough to help you create your Industrial powerhouse.

The project has already hit the alpha 6 milestone but there is loads more content in the pipeline. The next update promises an overhaul of the trade routes along with steam achievements and new analytics features. Further updates will include Steam workshop support, scenarios, dynamic events, traffic, industrial parks and more.

I’ve no doubt that these goals will be met. The devs communication with the community is first class. The discord server is full of high-level players sharing their experiences and ideas directly to the coding team. Beta builds are frequent with many tweaks and balance issues being addressed.

Even in its current state, Rise of Industry is the proverbial time sink black hole and weekend leisure time eater. It’s easy to get transfixed by the convoys of delivery trucks as they wend their way across the virtual landscape. Tinkering supply chains in order to wring the last ounce of profit never get old. Dapper penguin has already succeeded in updating the tycoon genre for the modern era. The development roadmap will only further enhance this already highly playable title. With steam workshop mod support and host of new exciting features to come the future is looking very bright for this early access game. For any budding armchair capitalist, there’s plenty of content to devour. The profit graphs and financial forecasts for Rise of Industry sure look promising. Recommended.