Lobster Empire is a soggy slog through mediocrity that barely qualifies as a modern game, even less so a sim, and certainly doesn’t earn the badge of being an empire of anything but tedium.

In theory, Lobster Empire lets you live out all your rabid lobstering dreams: you hire crew, purchase boats and commercial licenses, drag little pins around a small map indicating where you’d like to place your traps, then set sail. As you progress, you can upgrade your equipment, train your crew in various skills, run a hatchery, restaurants and shops. This all sounds good on paper, but in execution it’s a collection of good intentions that unfortunately just do not work together as a whole. This is a shame, really, because based solely on the screenshots, it looked like a cute, simple, farming sim, à la Stardew Valley, but with crustaceans instead of cabbages; perfect for a rainy-day afternoon, or other suitably quaint situation. What I didn’t expect was a game that was this shallow, linear, and repetitive. 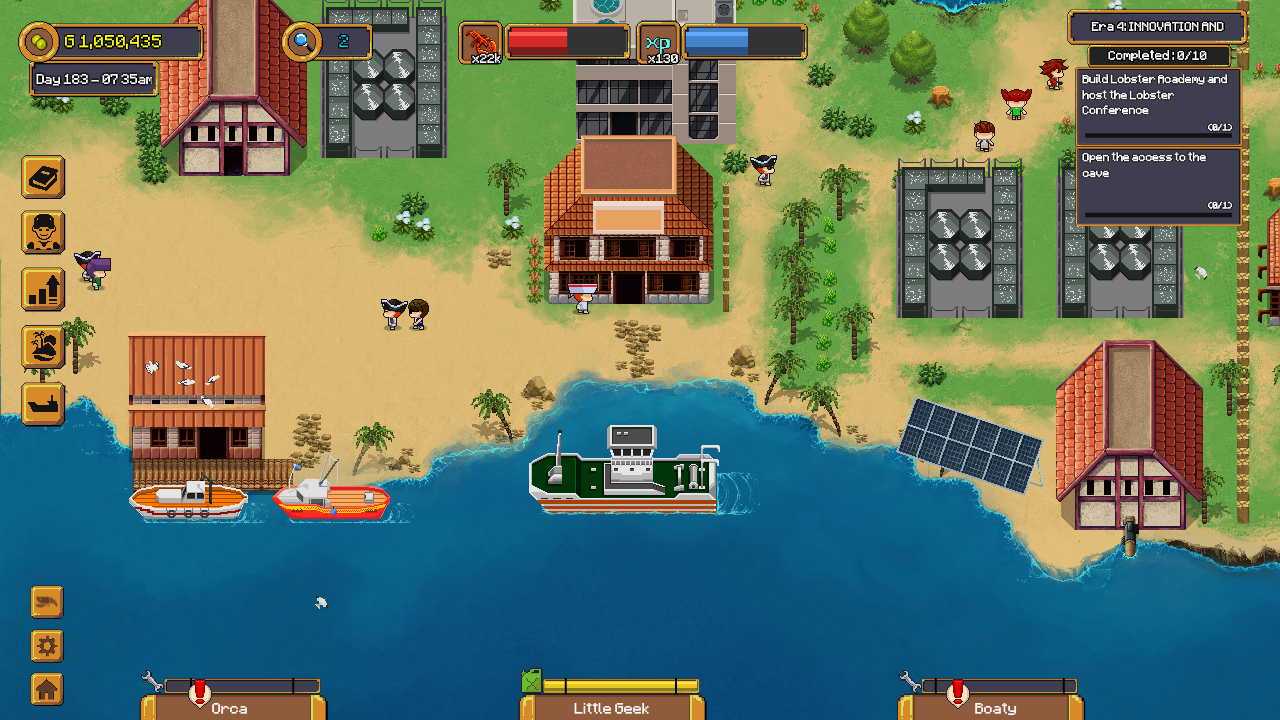 Not A Very Deadly Catch

Graphically, and conceptually, it owes a lot to retro gaming, and not in a flattering way. There’s so much pixel art out there already that the charm is long gone; so to stand out, a game must have a very distinct visual style. Lobster Empire, sadly, appears to belong to the copy-and-paste school of art. I honestly can’t tell if any of it was custom created or was merely scraped from clip-art sprite sheets. There is no sense of design, style, or personality. Visually there’s nothing here that you haven’t seen done before; and done better.

The biggest graphical sin, however, is the visual monotony of it all. The majority of the play time is focused around one little island scene. True, as you upgrade, a few buildings get added, and occasionally the screen dims (supposed to be night, I think), but otherwise, that one scene is the entire game. And it’s a mercilessly static scene, at that. Waves don’t lap at the shore, sunlight doesn’t glisten off the water, palm leaves don’t blow in a gentle island breeze; the entire game world is dead and static. I’ve seen museum dioramas with more life than this. The only movement seems to come from the dozen or so little people milling about the island. Perhaps that’s too generous of a description. It’s really just a handful of sprites repeated an absurd number of times and sent bouncing around the island like a 16-bit screen saver. Granted, you can click on each one to get a tiny speech bubble, but the results are about as helpful to your gameplay as a fortune cookie is at dispensing career advice. 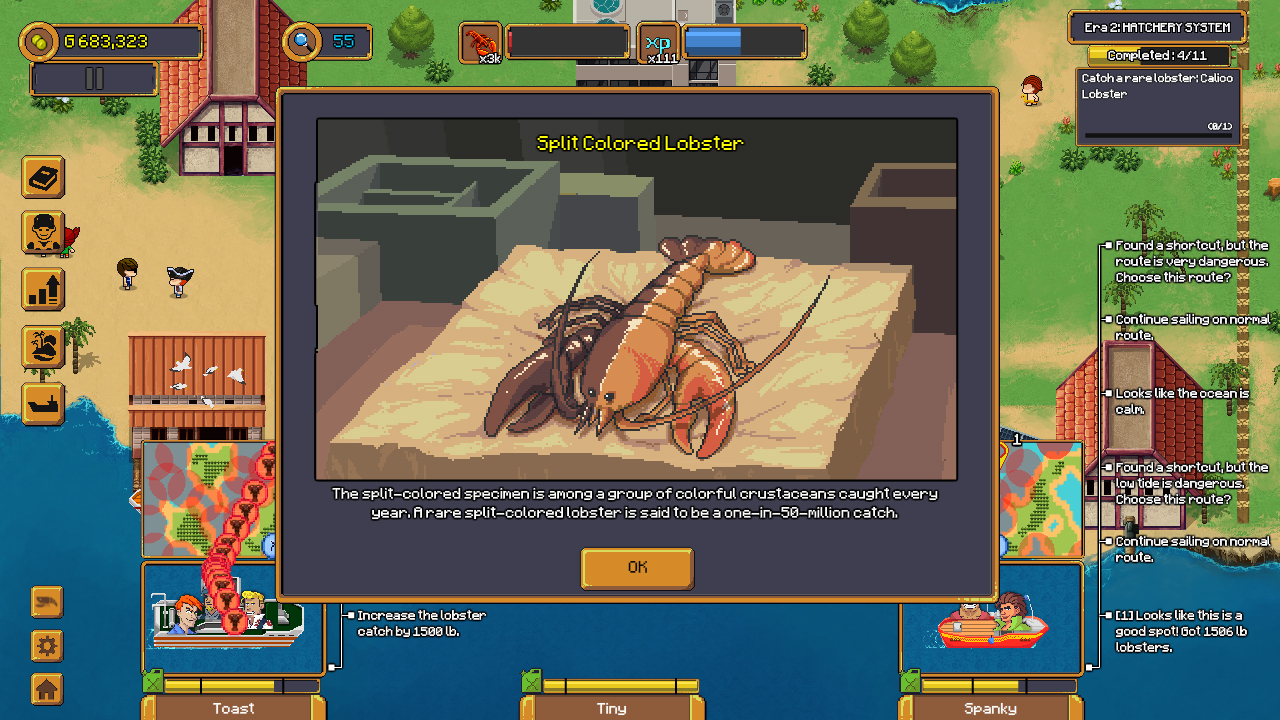 Sonically, the game fares even worse. The music is gratingly cute, yet maddeningly repetitive. You’re stuck with the same three note tune for the majority of your play, the only change coming each time you progress to a new era. Thankfully there’s a volume slider for the music, but once you turn it off, the game becomes utterly silent.

There are no sound effects, save for a little “clicking” noise each time you press a button. There are no ocean sounds, pelicans, waves, people, wind, or boat engines. You don’t even get to hear the lobsters scream as you boil them. Without music, Lobster Empire is a mute experience. The only upshot of this is it allows you to more easily play your own tunes in the background, which you will need to do, unless you’re fond of the merry-go-round music that constitutes the official soundtrack. 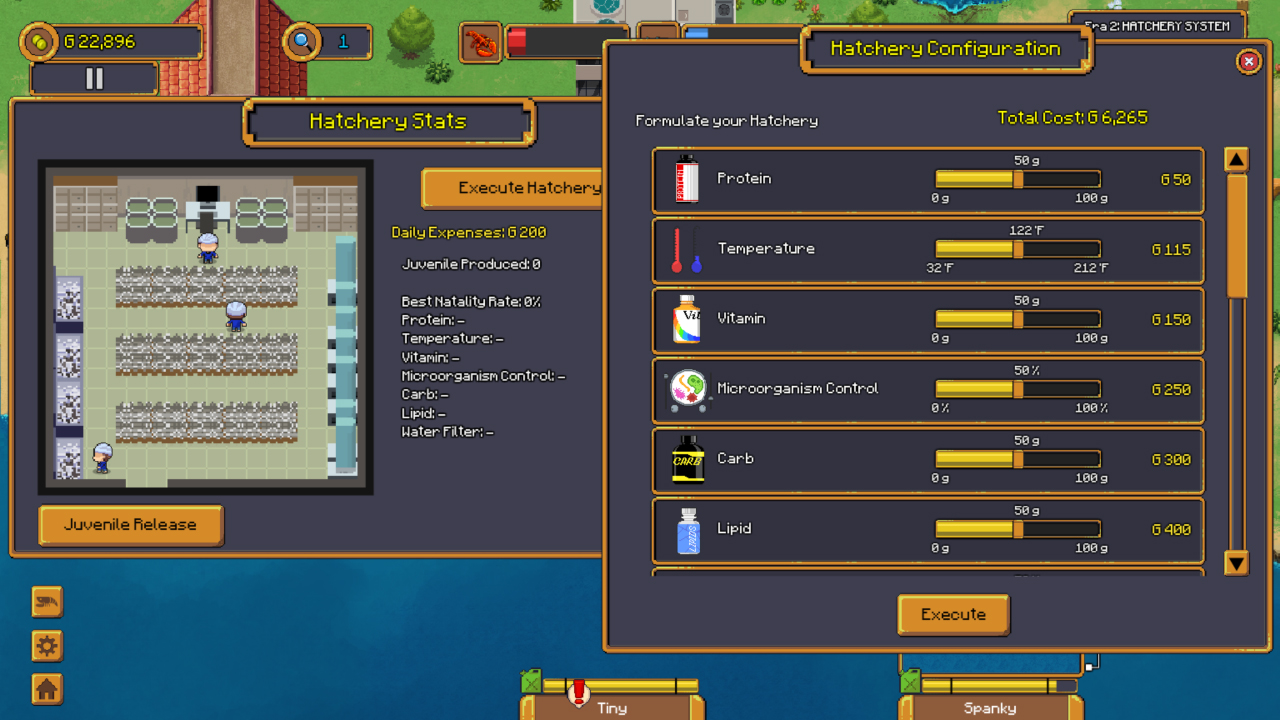 The play mechanics are downright antagonizing. Every calculation feels about as balanced as a carnival sideshow game, and overwhelmingly relies on randomness. The ratio of rare lobster catches to the resources needed to acquire them is a mystery; the obtuse settings for the hatchery and shops are not explained; the advantages and disadvantages of each upgrade are never revealed; how the player stats are used is vague; tasks take an inconsistently long amount of time to complete, for no particular reason; the entire financial system (how much things cost versus how much you gain) seems arbitrary; and on and on. At no point do you, as a player, ever feel fully in control, or rewarded for your efforts. Each minor victory unlocks new challenges which just send you back into a repetitive cycle of having to guess at the best strategy to unlock the next mystery. This effectively kills any sense of accomplishment that may otherwise come from playing the game. You will not be rewarded for your skill, because the game is not based on skill, it’s based on luck. And what little skill you can employ is mostly about trying to mitigate the fallout caused by the very random nature of the game.

You can level up your crew as much as you want, but they will still randomly get sick, lost, or fined; and usually these events will abort the mission, sending you back home empty handed, but still having to cover the cost of the expedition. It’s like Oregon Trail, but devoid of humor. I also question the methods used to generate these random events. It is not uncommon for the exact same foul event to befall you three or four times in a row. Once is irritating enough, twice is unfair, and anything beyond that either reeks of conspiracy or shoddy programming. And since you only have enough time each game-day for one or two expeditions, these constant setbacks feel like an artificial limiter. 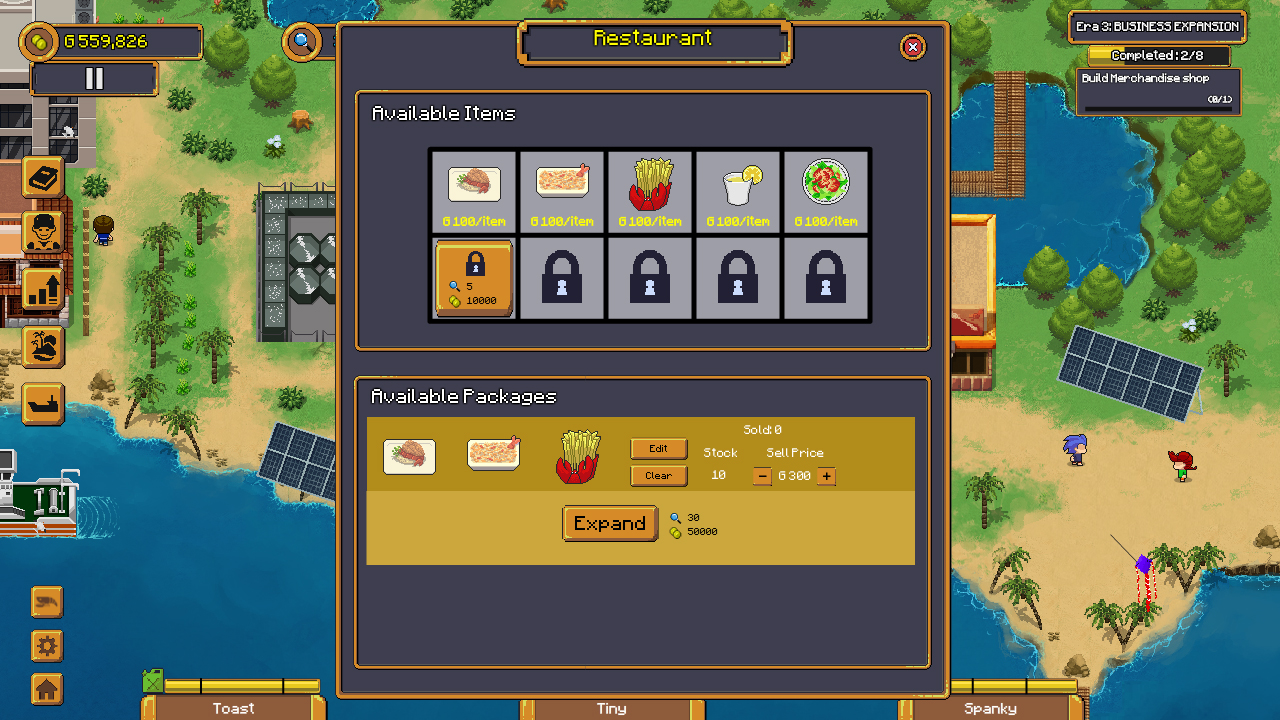 Although the constant reliance on randomness is irritating, and the unbalanced gameplay is frustrating, what really kills any and all fun is the incredibly restrictive and linear progression. It’s like a sim on rails. All the above-mentioned skills, tasks and upgrades are doled out, one by one, in a straight line. This contrasts with most sims which operate, more or less, in a sandbox-like way; they encourage the player to find multiple paths to success, and creativity is rewarded. Creativity in Lobster Empire, however, is greatly discouraged. There is only one way to progress, there is only one way to play, and there are no choices. The game unfolds more like a single player campaign than a free-form sim. What appears at first glance to be a tech-tree, is just a list of plot points along the campaign. At no moment can you affect your own path or growth. You move through the campaign by achieving linear goals, which in turn unlock linear abilities. While some goals are based on skill, such as the size of your catch, or amount of profit, many of them are based on random events. While sailing around you will have encounters which accrue Rarity Points. These are required to proceed, and the further you get into the campaign, the rarer the requirements become. This turns into a serious grind, as it doesn’t matter how good or bad your tactics are, you can’t progress until the game randomly decides to let you. 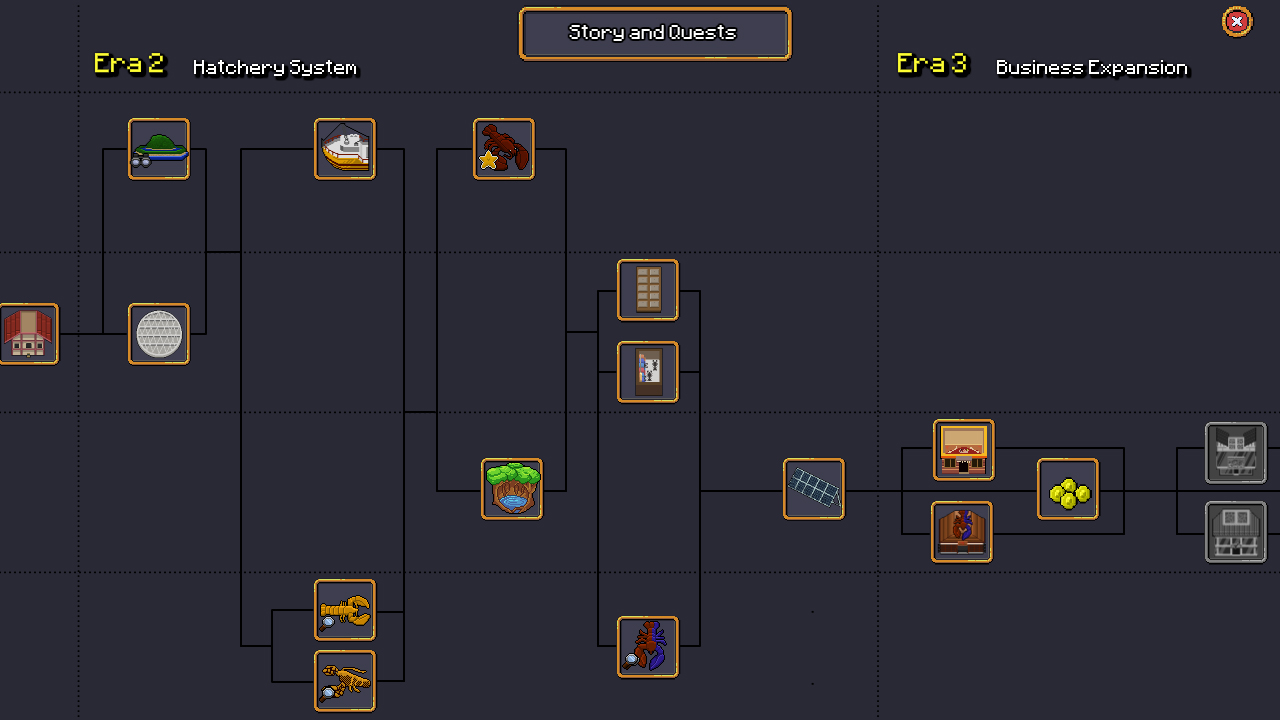 More often than not, succeeding in Lobster Empire requires patience from you as the player. Lots of patience. Crazy amounts, it would seem. Not only is that partly due to the infuriatingly random nature of the game, but also because the overall pacing is slower than sea sludge. From a strategic standpoint, every single action in the game uses up time, and you’re only allotted a certain number of hours per day. The game clock itself moves at the same relentlessly slow pace, there is no fast forward, or skip, there isn’t even a manual pause button. So not only are you punished with unholy amounts of grinding, you also have the pleasure of having to wait for it.

Finally, Lobster Empire has zero replay value. Other sims are more open-ended and either encourage you to play forever, or to restart with different build-outs. Likewise, other games have multiple options for play time; feel like a short game to pass the afternoon, or a more involved session to sink weeks of your life into? Lobster Empire offers none of this flexibility. There’s no point in restarting the game, because of the linear progression, each play through will be exactly the same as the last. And owing to the catatonically slow pace of the game, if you are brave enough to complete it, you won’t soon want to waste that much time doing the exact same thing again. 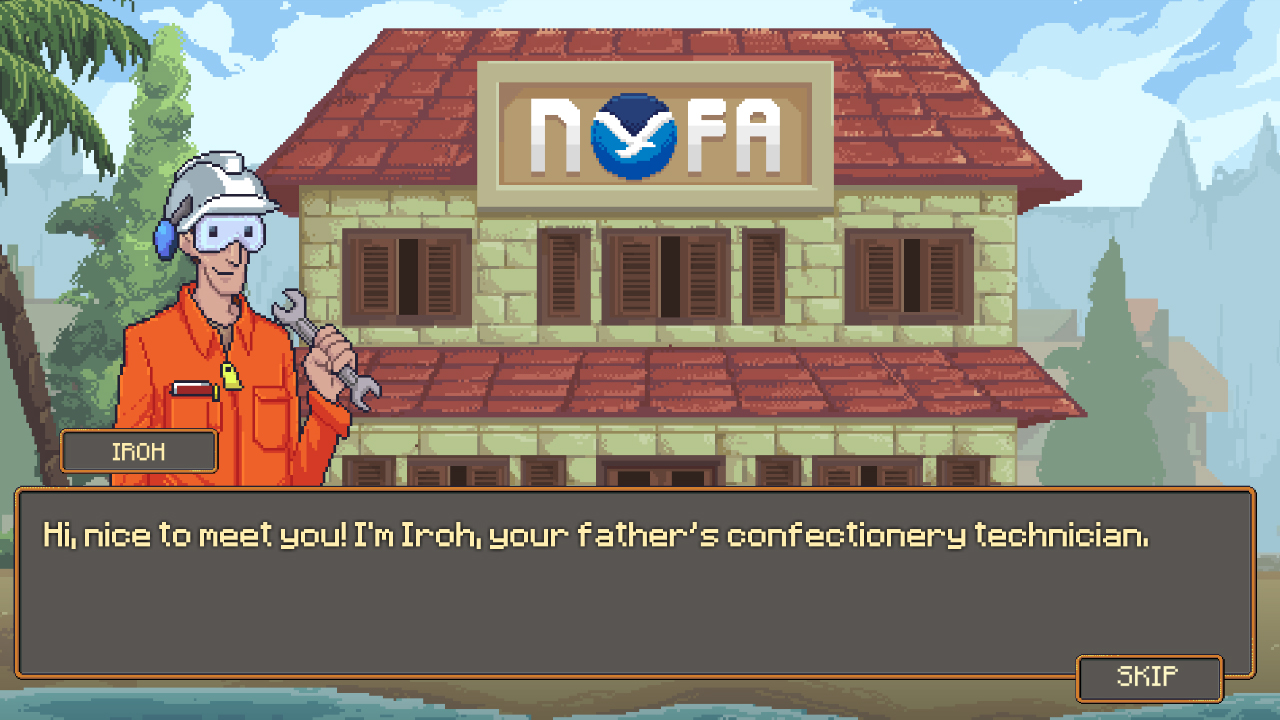 The pace is so slow, the rewards are so few and far between, and the balancing is so wonky, that all these design flaws (intentional or not) make this feel like a low-rent mobile game. And the more I sank my time into Lobster Empire, the more I became convinced that is what it was: an abortive attempt at making a mobile clicker; they just forgot to add the in-app purchases.

Despite all my criticisms, though, if I were to praise anything about this game, I guess I’d have to admit that the concept is mildly entertaining. Occasionally it’s good to take a break from the violence, intensity, and intrigue of other games, and just play something casual, where the only thing at stake is a good seafood dinner. And admittedly there is more variety later in the game, but it’s a shame those fun elements are withheld for so long, as most players will give up before seeing them. The game runs well, I encountered no bugs (outside of unintentionally hilarious mis-translations), and it doesn’t require a powerful computer. It’s easy enough to learn the mechanics in a single sitting, is suitable for all audiences, and is completely benign.

It’s as if the game was lovingly crafted to be perfectly mediocre. And while mediocrity isn’t inherently a bad thing, it also doesn’t justify spending full price on this game; it’s even difficult to imagine getting it on sale. After playing it, I’m still puzzled as to who the target audience is. Casual gamers will find it frustrating, more experienced gamers will be bored, and the entire thing has all the replay value of used bubble-wrap. So, unless you’re a die-hard lobster fan, or you just need something to play while you’re waiting for laundry to finish, this game is a wash.