As an Inquisitor you don’t care about anything else than Purging the Galigari sector that is rotting from the inside out. Warhammer: Inquisitor – Martyr is an ARPG that features design choices that don’t sound good even on paper.

I’ve been following this since I heard about this game about a year ago. The original design plan sounded very ambitious. What interested me most was the plan to include a base-building aspect and attack other players bases in a PvP-mode. This was canceled after a while for being too hard to implement the way Neocore Games originally planned it. It was a shame, but most likely for the better and they also announced this information to the public. Another interesting promise included a massive open world spanning multiple planets. I enjoyed my time with The incredible Adventures of Van Helsing and Deathtrap, so I was extremely interested in this game. Neocore Games doing a Warhammer ARPG. Was I dreaming, has the Emperor bestowed this gift upon us?

Let’s tackle the size of the world, that was hyped to be massive. The starmap which the game uses for navigating between stars does give an impression of a massive area to explore. There are multiple star systems, each with their own sectors that feature multiple planets. Planets act like random missions where the players can grind as much as they please for exp and loot. That does sound good and looks impressive the first time it’s seen, but it isn’t.

No matter which planet I went to, I always ended up getting a randomly generated area that was completed in 5-10 minutes and looked like the last one. Level design features a few different settings, from spacecrafts to snow peaked hills and destroyed cities, but nothing that is especially interesting. After a while, I found myself purging areas without much concentration and watching YouTube while blasting through hordes of enemies on yet another spacecraft-level. As beautiful as the game looks at times, repeating the same sights over and over again still wears out the charm and eventually becomes boring. 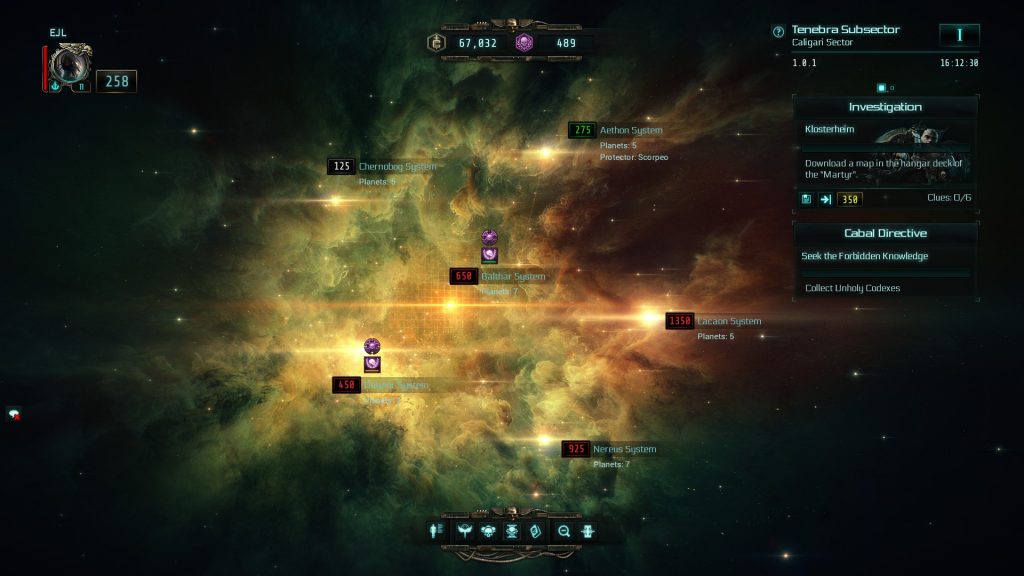 Thankfully, the campaign missions are mainly hand-crafted areas offering a bit more visual variety and more reason to explore every corner. I could advance in the story without being forced to grind for better gear on random missions every once in a while. However, we all know what happens to the main campaign if there are sidequests and challenges to complete, even if they aren’t exactly fun to play (yes, I’m looking at you “bring-my-right-boot-from-the-cave” fetch quests). There is a lot to do in this game even if it is just more of the same. “Influence” on every star system that is gained by crunching out the random missions and reaching to a certain influence-level gives out rewards. Tarot runs, special missions for extra loot that require fate to enter, 100+ challenges to complete. The only problem with all this content is that it’s extremely repetitive and uninteresting. Especially with the Tarot runs since fate is gained from missions and the fate received per mission is small. The cost of fate per run increased the more I did the Tarot runs. Eventually I ended up doing more than 10 random, similar missions to get enough fate to perform one Tarot run. 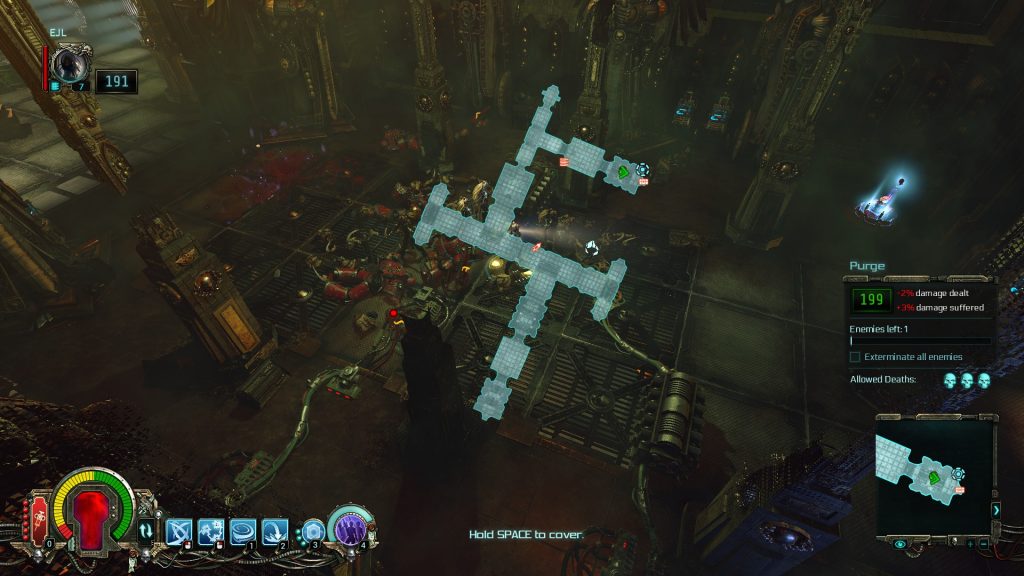 A massive fortress monastery called Martyr is found after being lost for ages. Seemingly no humans are on board, only Servants of Chaos. Something has happened, but what? I’ve always been a sucker for these kind of mysteries, so the plot kept me intrigued, but it isn’t anything groundbreaking. My personal preference for game story-lines like this are plot events such as something bad happening in a remote location and one guy goes to see what’s up. These type of situations make a story more interesting to me than it really is. However, nothing this interesting actually occurred in the game. Story missions also fell into the same repetitive pattern as the random missions even if they levels themselves looked different. When I reached a big door, I often got a message saying that I have to first open a couple of levers that were in other rooms, and of course, in the opposite directions from each other. It felt they were there just to make the level a few minutes longer. I couldn’t come up with any other reason while I was running around the levels in every direction. 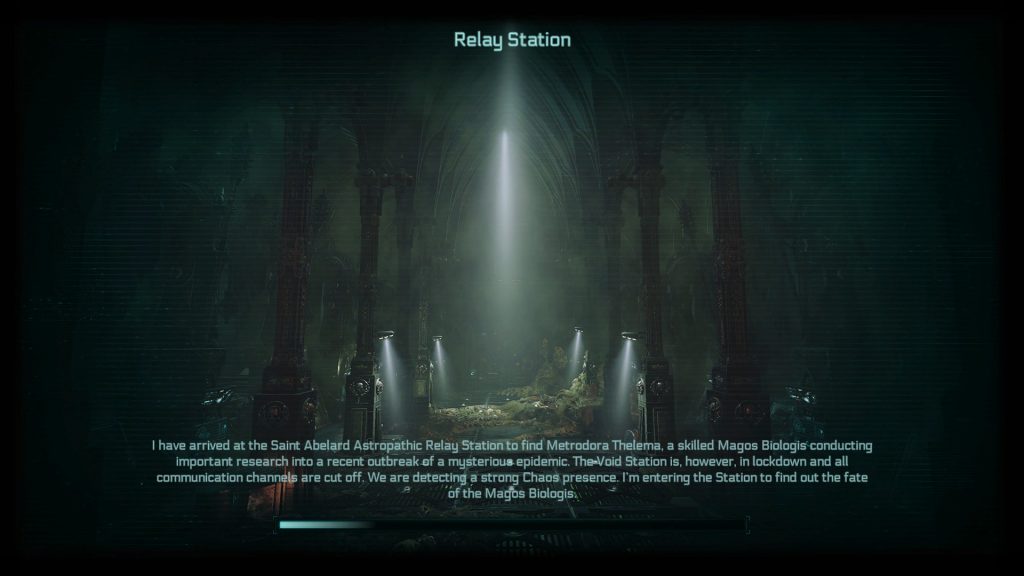 There is always war

Combat was advertised as being more tactical than your everyday ARPG and featured a cover system. I don’t really see the tactical side to this. The few different skills that the game offers are tied to weapons: I had no way of customizing my skills other than changing my weapons. And changing my gear could only be done between missions. If I tested out a new type of weapon/their combination, I was stuck with a potentially bad skill set for the whole mission. I also couldn’t clearly even see what the skills did with the weapons before trying them out. I saw the icons so I could try to guess what the skill did, but couldn’t know for sure before trying it out.

All skill trees that the game has provide passive bonuses which are trivial at most. For example, a 1% increase to melee weapon damage. It takes multiple levels and hours to grind better gear before those kind of bonuses to anything to the enemies. In the end-game the character is strong, but the feel of progression is far off during the first few hours. The Cover system itself felt like a nice addition. I found use for it with my stealthy character who couldn’t endure much damage but was a beast with her sniper rifle. She was extremely deadly with melee weapons as well, so I rarely needed the cover. Mainly, I took cover only when I wanted to recharge my health faster, but not out of necessity. 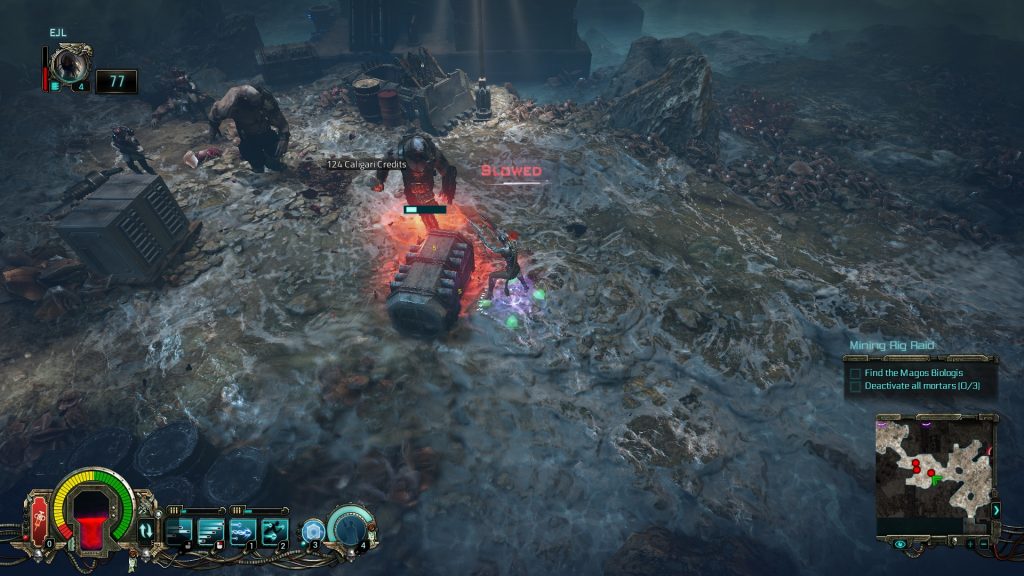 There’s more to combat than just the gear and skills. For instance, how is the purging of heretics overall? It’s not good either.
The combat is clunky and slow, even with the fastest class, the assassin. Switching weapon sets in the middle of an action isn’t always working and the camera has its problems. The camera has to be moved manually, and its done by pressing down the mouse wheel. In the middle of a huge fight this is really annoying, but sometimes necessary. There’s not even much to say about the combat, it’s just.. slow, uninteresting and tedious when combined with the massive amount of grinding this game requires.

Increasing the difficulty just lowers the damage my character did, while increasing the damage enemies did to me. I didn’t notice an increase on mobs or more skills on enemies. Everything stayed the same, except the damage we dealt to each other.

To make the combat fun would require a total overhaul of the whole system.

If it seems I’m not saying anything good about this game, That’s because I’m not. Every aspect of this game fails. Did you wonder why I didn’t mention co-op anywhere? That’s because I wasn’t able to get into it. The game’s main chat didn’t work and I didn’t find people to play with, so I gave up.

Future of the endless war

The developers promise a lot of content to come for free in the future. The level cap is being raised (Yay, more grinding), more weapons, items and enchants. A third enemy faction will spice things up a bit and the developers promise some special events to be held in order to make players compete more with each other and receive unique rewards. A new mode called Warzone will generate endless missions with increasing challenge and there will be special bosses, supposedly extremely strong, along with a totally new sub-sector to explore. I’m still interested to see how this game turns out and I will most likely to return to check out the updates. Not right away, but maybe someday I will.

This game still feels like it’s in alpha. It doesn’t offer much content at all, even though the star map is massive, and everything is the same. The combat is clunky and repetitive, even frustrating at times because of the slow tempo. Progressing is slow and the loot is uninteresting. Most levels look and feel the same, quickly demolishing the player’s interest even faster than the crusader with a flamethrower purging a room. There are Interesting moments in the main plot here and there, but they do not compensate for all the negative aspects of the game. I’m finding it hard to believe that this is a product of Neocore games. It’s nothing like their previous ARPG’s or even most other ARPG’s that I’ve ever played. Almost everything is bad in this game. In its current state, I advise players to revisit Neocore’s older game. They’re fun and much more interesting.