The Watchmaker presents an interesting story with pretty graphics and excellent music. It’s just a shame about the gameplay. Oh, and the voiceovers as well.

The Watchmaker is the debut Steam title from Micropsia Games, published by 1C Company, in which you play Alexander, a man of variable age and mysterious background.

The game begins with a weird spirit thingy flying about inside a huge clock tower. Massive gears and cogs have ground to a halt and it’s muttering about some sort of sabotage and finding The Watchmaker: apparently the only person who can fix it. Eventually it stumbles across Alexander, an old man literally sleeping his life away in an office inside the tower.

The spirit wakes Alexander and quickly explains the situation, but Alexander’s memory is fuzzy and he doesn’t completely understand. Escaping from the office, Alexander follows the spirit’s instructions as he attempts to catch the “Ruin Saboteur”, repair the tower — and in the process, time itself — and recover his memories.

The first thing you’ll notice about The Watchmaker is its graphical style: cartoon-like, with muted colours, large characters, and a mix of clockwork, steampunk, and science-fiction influences. The Watchmaker himself is tall and lanky, like something out of an independent European animated movie. Many of the enemies have a similar look to them, too.

Once the action begins, though, it starts to look a little less impressive. Animations are a bit wooden and many are rather slow and uninterruptible; once they begin you have to wait for them to finish, even if that takes a few seconds. The effects of age on Alexander are a little too subtle for me, too; I’d have liked to see larger changes in movement and posture, for example. Effects are mostly good, particularly the time-slow and shield, but then others look really bad, such as the flowing water in one of the puzzles on Level 2. 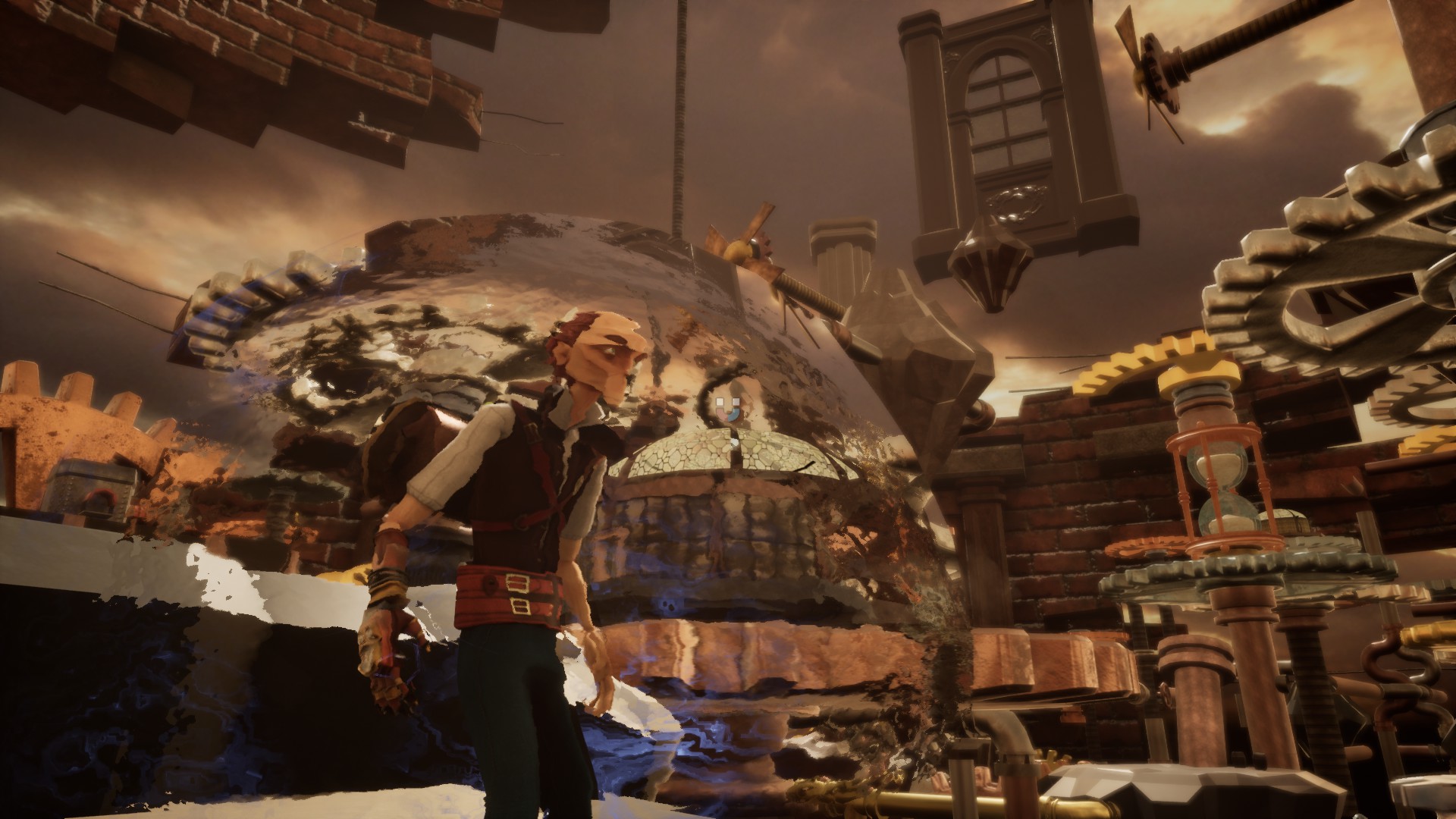 I believe the game is spread across five different levels, but I’ve only seen the first two. Level graphics are nice enough, but start to feel a bit bland before too long, and the drab colours don’t help to dispel that feeling. Visual range is good, but there’s obvious pop in of some objects.

Music is great, with a Danny Elfman feel, and it perfectly suits the look of the game. Sound effects are okay, but I feel some of them are a bit too quiet while others are too loud. In the end the whole lot just felt a bit cacophonous.

Adding to that feeling is the awful voice acting. Alexander sounds like he’s played by two different people: an angry skinhead about to steal your pint and an aristocrat with an impressive education. That could be intended, but it doesn’t seem to correspond to changes in his age, so I suspect not. But that’s nothing when compared to the absolutely terrible voice of the spirit, who makes Jim Carrey’s most annoying sound ever seem like a blissful melody. And it’s SO LOUD! *shudder*

Subtitles don’t match the spoken words, and script also seems to have been translated in a way that leaves it hard to follow. There are a number of graphical options, which you might need to adjust. I experienced inconsistent slowdowns when rotating the view or moving quickly on my GTX1070. 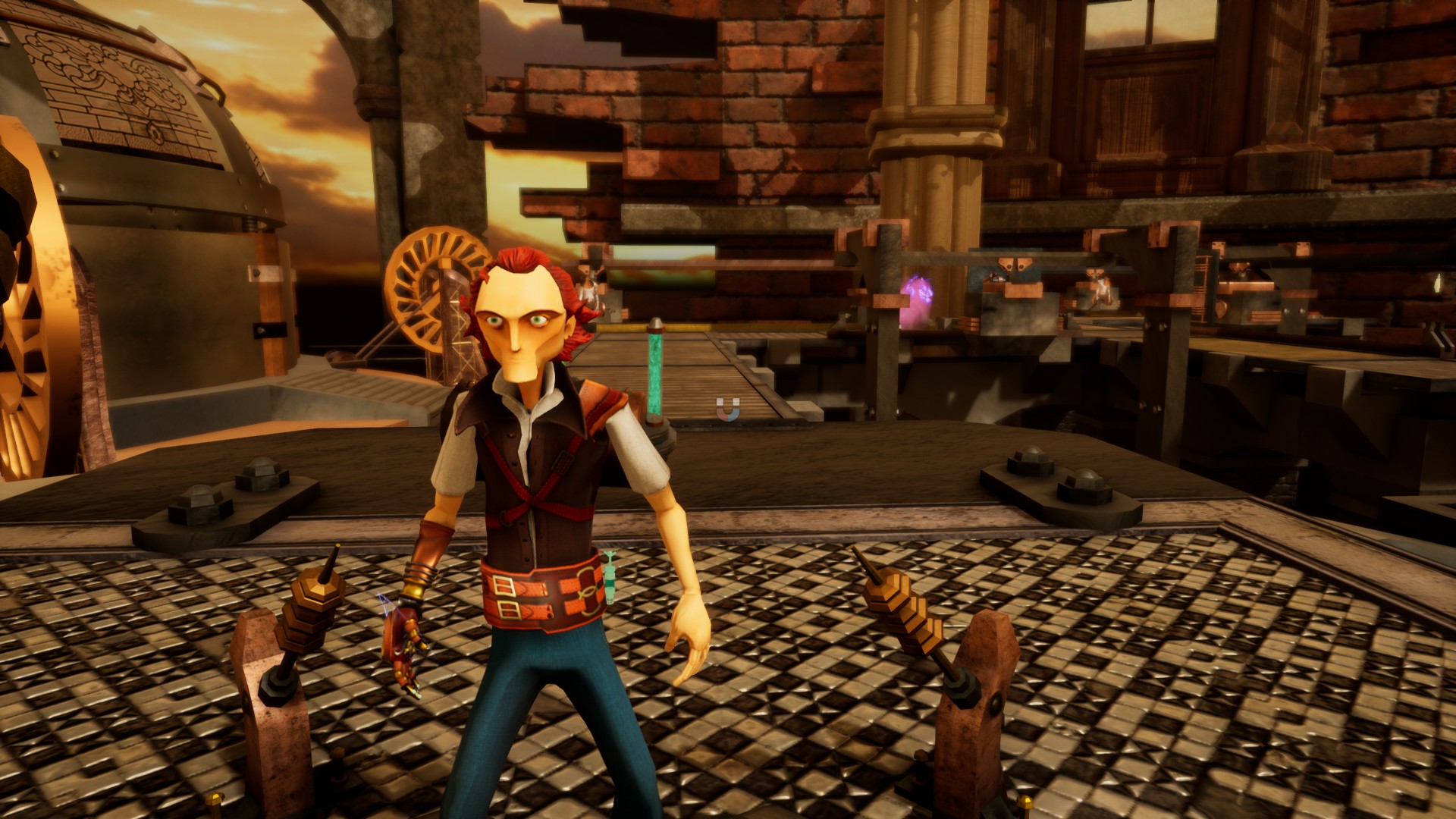 The Watchmaker plays like a classic third-person puzzle platformer with a dash of action. You control Alexander as he runs and jumps his way about the levels, which make good use of all three spatial dimensions. There’s configurable controller support as well as mouse and keyboard controls.

Alexander wears a strange backpack, which not only displays his stamina bar, but also a power meter, and, most importantly, his current age. Time itself is broken, so a few moments of real time or damage from an enemy sees Alexander’s age increase by years; when he hits 90 he dies, though collectible items can reduce his age, too. It’s an interesting variation on the standard health mechanic. 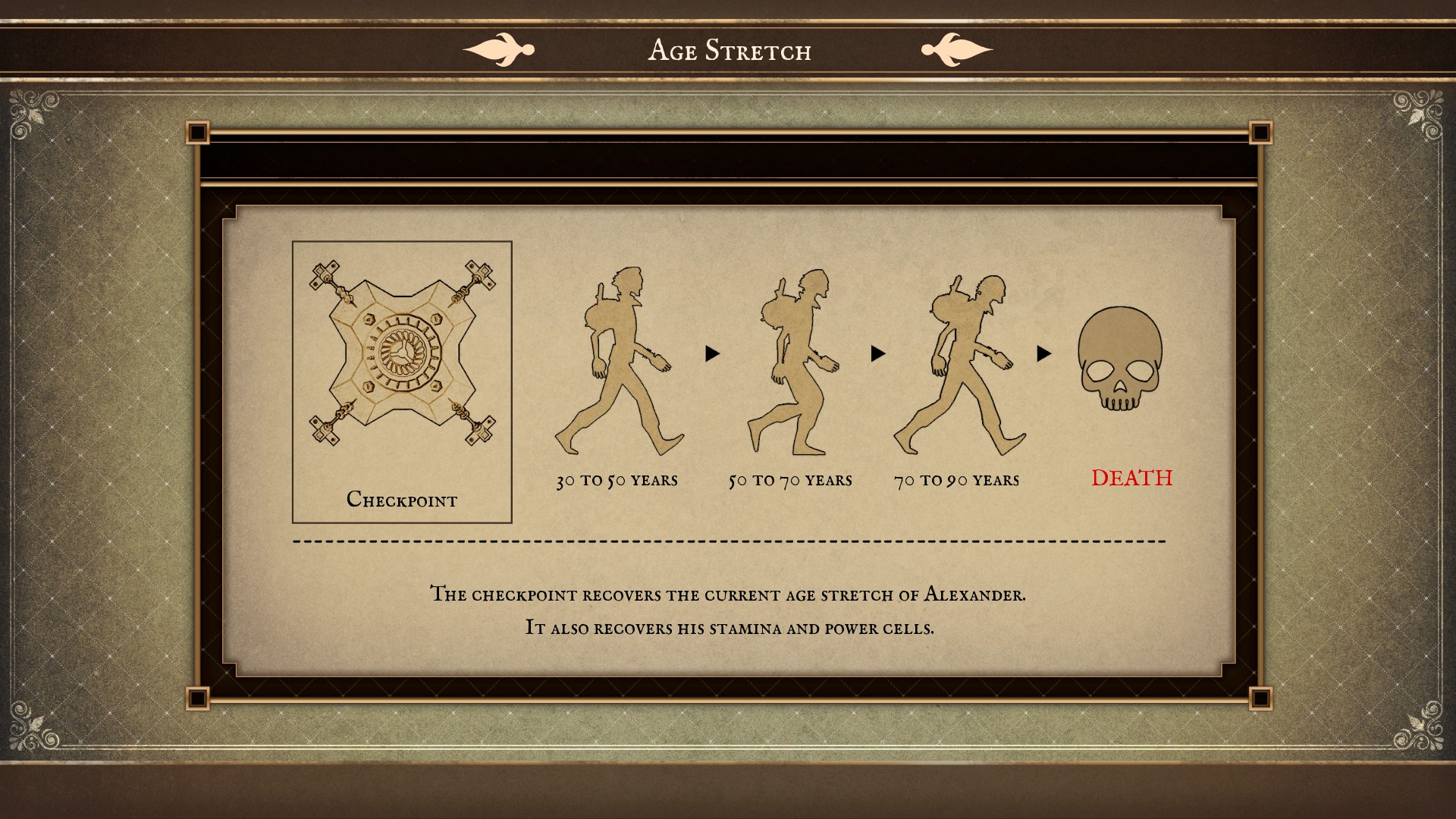 He also wears a freaky-looking electric gauntlet thingy, which uses the backpack’s power for some nice effects: an energy blast; a shield, which doesn’t seem to do anything most of the time; a time-image duplicate, which enables Alexander to press two nearby buttons at once; an energy grab, which is unreliable; and a time-slow effect, which annoyingly takes a few seconds to activate. Exactly why the backpack displays critical information to people behind Alexander, and not Alexander himself, is a mystery, as is the source of the power and abilities.

The game uses checkpoints for saving. Stand on one of these and Alexander’s age, position, and (most of) the current level’s state is saved, to be restored on death or reload. When it works this model isn’t too bad, but the ability to go back to the start of the current level, or, even better, set your own checkpoints to return to as well as the automatic saves would really help.

Core gameplay involves running and jumping about lots platforms — made more difficult than it should be by unresponsive controls and uninterruptible animations — looking for buttons to press or handles to rotate in order to effect changes on the world. You’ll encounter lots of boring enemies to engage in unfulfilling combat (it’s usually faster to run away), and each level has a boss with set attack patterns to learn and counter. In other words, it’s pretty typical of the genre and it all feels like you’ve seen it before. 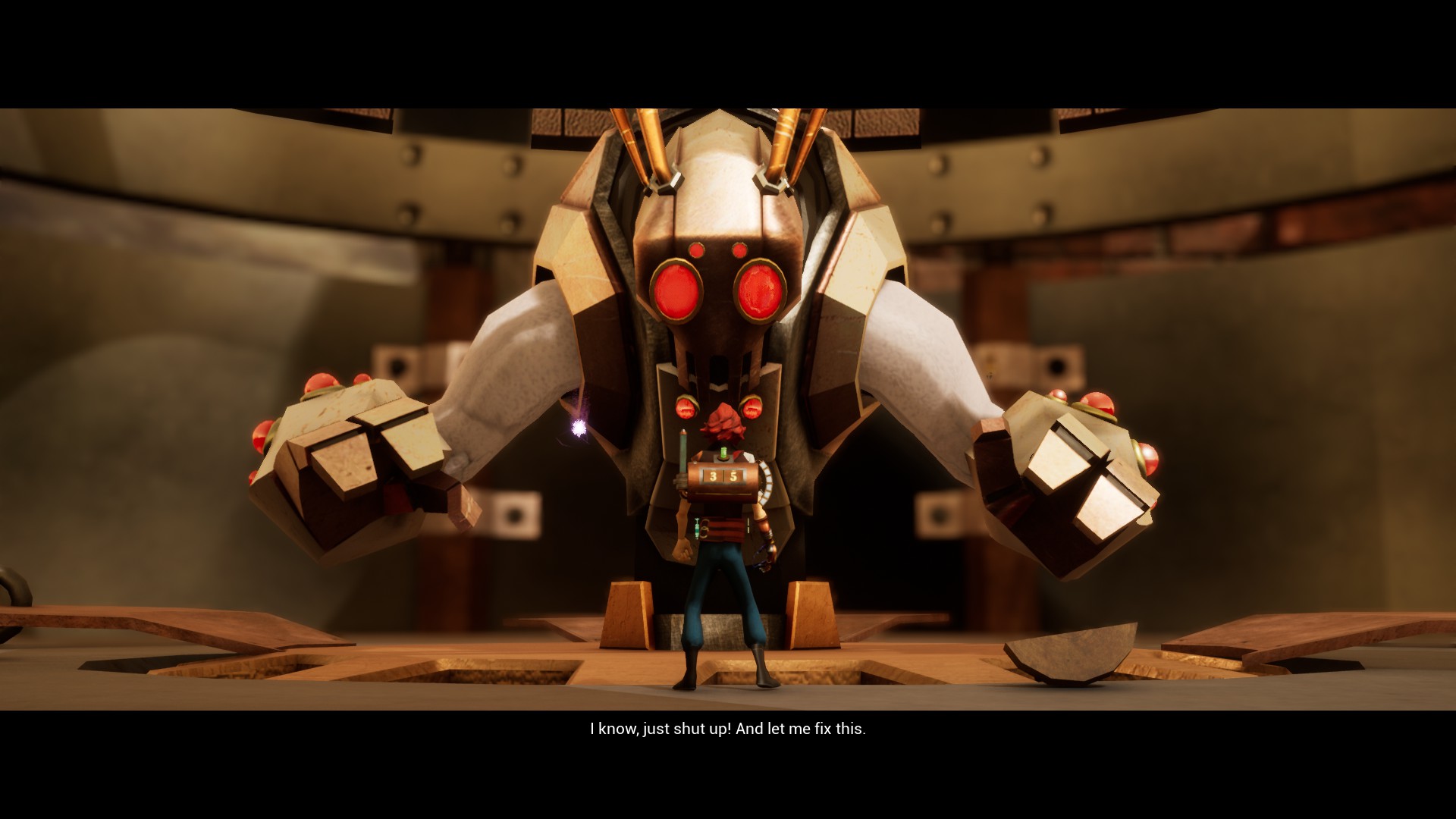 The puzzles are mostly similar in design: two buttons spaced a certain distance apart are obviously going to require a duplicate, while a button that immediately starts a distant platform moving will need you to slow time, etc. But the nature of the levels and game is such that you’ll often spend ages wandering about looking for the next step, and there’s a fair bit of backtracking. The levels are big and hard to navigate, and the poor pacing and translation of the script make it even harder to work out what’s going on. It feels like a confusing, unintuitive mess.

To make matters worse, loading times are long and the time taken to restore at a checkpoint, though measured in seconds, feels altogether too slow, like many of the animations. 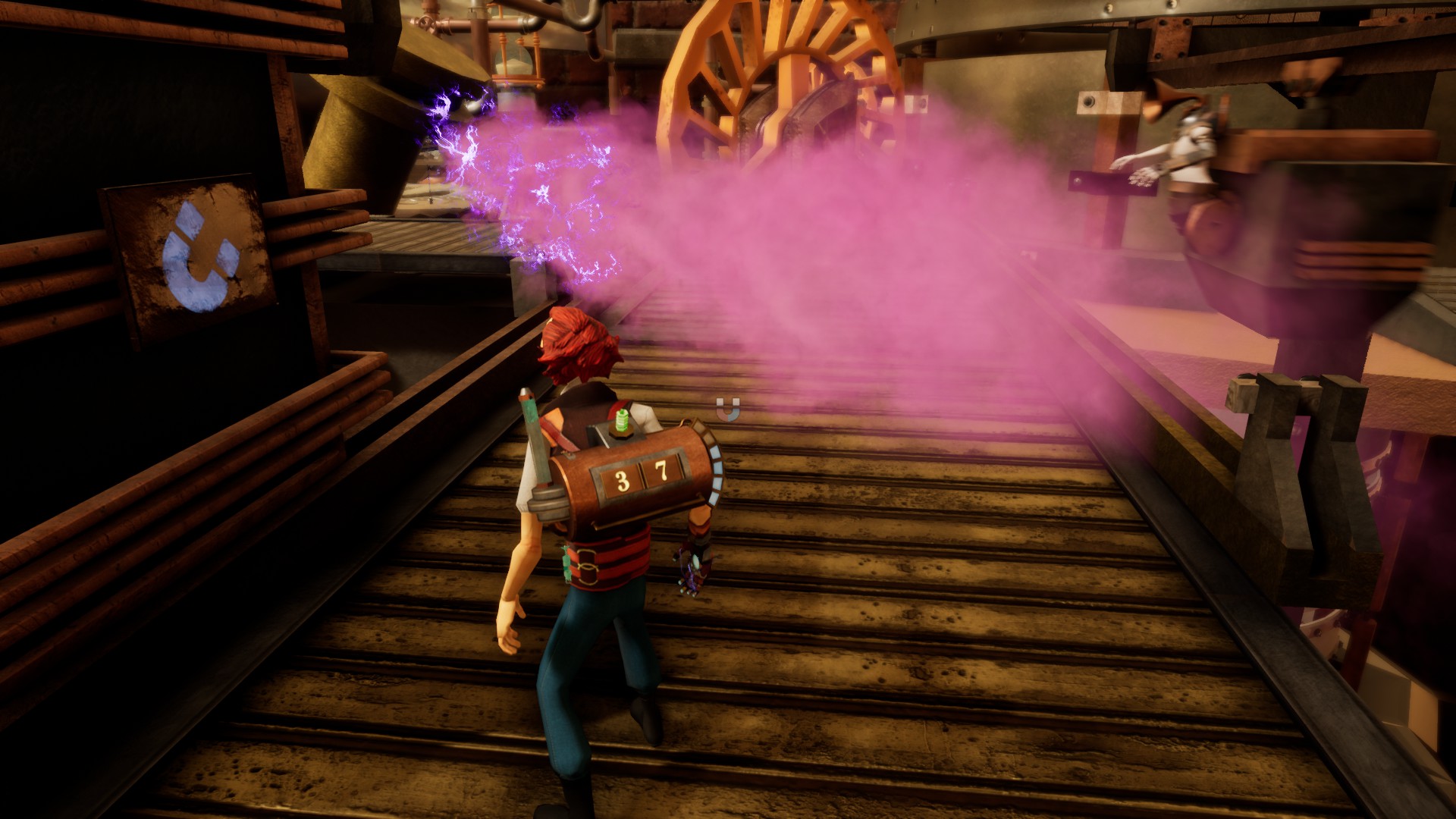 Finally, the game is extremely buggy, with bugs ranging from frustrating to game breaking. Here’s a sample:

Add to that the far-too-close camera, long wait times, instant kills, slow and uninterruptible animations, and annoying voices, and I was almost relieved when the second level seemed to break, because there was no way I was going to start all over again. And that’s a terrible shame.

Editor’s note: the developers say they are working on a patch that addresses many of the bugs mentioned, to be released soon.

While I appreciate the art style of The Watchmaker and I have some sympathy for what the game is trying to do, I’m sorry to say the bugs and other frustrations, some of which are inherent in the game’s design, made me want to give up playing after only a few short hours, most of which were spent wandering aimlessly around the second level after a broken puzzle prevented me from progressing.

With a bit more effort on QA The Watchmaker could have been an acceptable puzzle platformer. As it is, with all its faults and questionable design choices, I can’t bring myself to recommend it. But it does look nice.