If you think you might enjoy a funny visual novel about a sex robot, read on!

Perhaps the first thing that needs to be said about a game entitled Sex Robot Road Trip is that there are some hints that the game might feature adult content.  It doesn’t.  Not REALLY, anyway.  This is a game centered on comedy, not titillation.  It does the comedy part well, which makes it a game worth playing.  But on this, and on several other levels, this is a game that defies expectations.

Elaborating a bit, if the hint of sexytimes is why you were interested in buying it in the first place, then you’re likely to be disappointed, because the game’s sexual content is never anything more than ironic. If you’re hoping to see nudity, that will not happen  None of the game’s choices will let you see any more of any of the characters’ skin.  There IS, on the other hand, a set of endings in which you can make them put on less revealing outfits.   …for the purposes of trying to get laid.  Again, irony is the general theme here, and that tends to be done well. 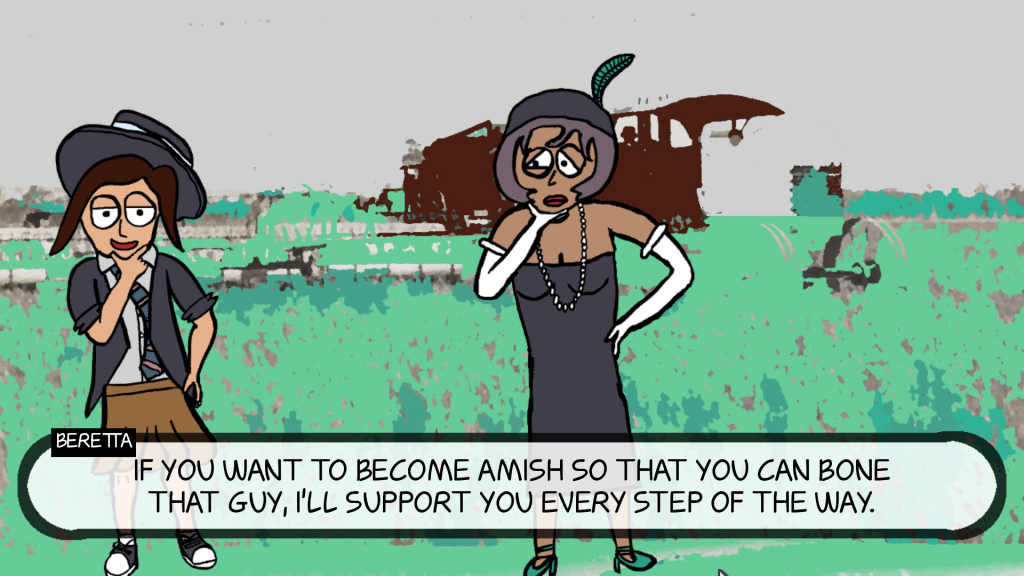 With that point cleared up, if you’re ok with getting your nudity elsewhere and just want a funny visual novel that’s not afraid of taboo themes, then Sex Robot Road Trip manages to exceed expectations in most ways. 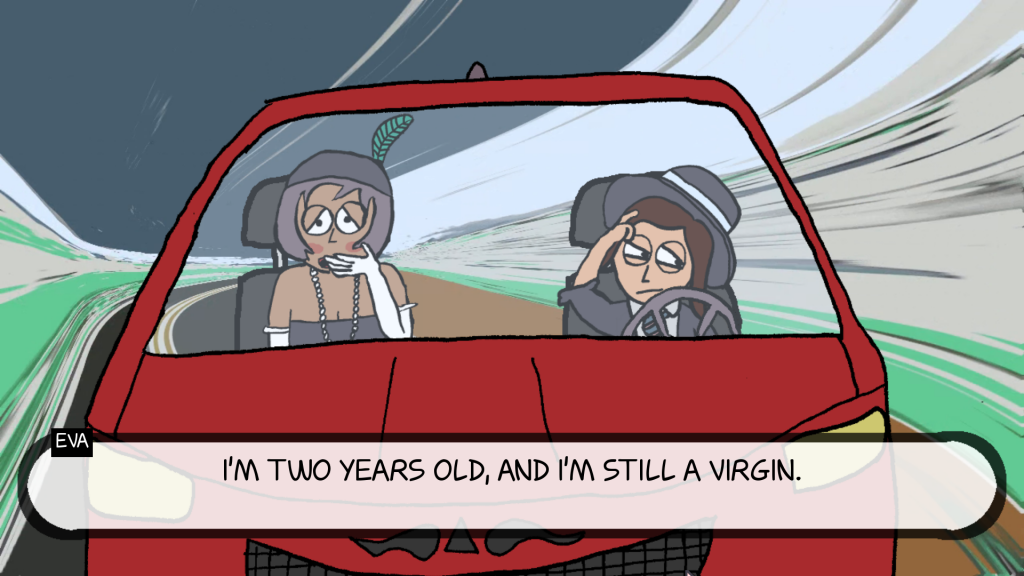 To start, it does make sense to dwell on the title just a little longer.  The game does indeed feature a sex robot as one of the major characters, and the game is not shy about that literal truth.  Her name is “Eva 58008,” which is probably worth a smirk if you’re old enough to have had a 7-segment display pocket calculator in grade school, but likely baffling otherwise. 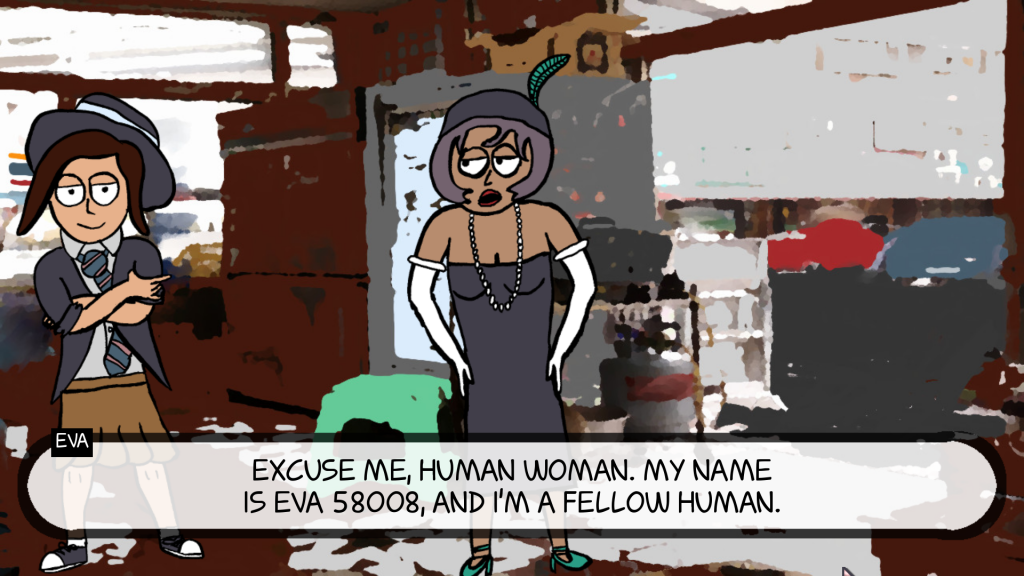 The game manages to engage your other senses better than you might expect as well.  The music is unmemorable, but fitting.  The writing is completely unpretentious, but generally much better than expected.  Sentences like “I smell… a sex robot!” sneak up on you.  ‘Smell?  Why smell?  What does a sex robot smell like?’  Then, suddenly, you realize you have to guess.  And now you’re imagining a complex mixture of scents you might not have even realized you were actually familiar with.  Immersive!

While the writing is sound, the dialogue contained is often puzzling, adding to the idea that the game is not taking itself terribly seriously.  Eva 58008 is dressed like a 1920’s flapper (this point is mysteriously never explained), but the female protagonist repeatedly call her “Bro.”  While that’s not a choice I would have made myself, it does fit the general feel of the story, which rarely rewards (or offers) traditionally logical decisions.  As an example of this, one of the first choices I was given involved me deciding whether or not to play as a getaway driver for a strange woman who had just confessed to stealing a car she did not know how to drive.  Erring on the side of caution, I declined.  And thus, the first ending involved me finishing lunch, followed by the suggestion that perhaps I lighten up a little.  Given few other alternatives, I did, and thus my second ending involved literally giving birth to the antichrist.  Say what you want, but the game’s got range. 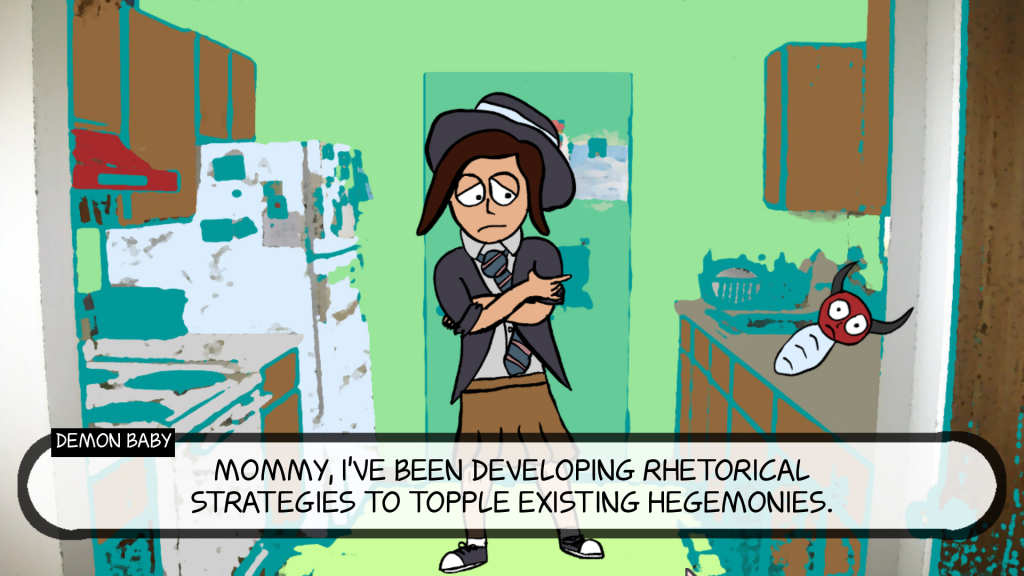 Did you notice me mention that the game features a female protagonist?  Yes, defying expectations once again, Sex Robot Road Trip manages to tick off one of the gold standard metrics of female inclusion in video games.  That realization got me wondering if it passes the Bechdel test, and I find myself surprised that it does.

The game’s clearest negative is its graphics.  It’s actually fun to guess how they were created.  Personally, I think I see two distinct art styles.  One is crude drawings perhaps literally done in MS Paint.  This style defines most of the story’s characters and animations.  The second appears to be based on actual photos, but… something… has been done to them.  Perhaps they were run through one of the more aggressive “AI artist” apps.  Perhaps they were painstakingly drawn over, again in MS Paint.  It’s hard to say exactly.  The second style makes up the scene backgrounds.  To be fair, the two styles complement each other without clashing, but in both cases, the results are casually crude.  The game flirts with being meta on that point.  The “Hershey” story path flippantly demands that you declare a series of questionable in-game artistic performances as either inspirational or insipid.  The game sets you up so that the “insipid” option is probably the path of least resistance, but the option of laughing and finding value in them is valid enough too.  That’s an outlook that’s appropriate for evaluating the game itself.  In both cases, just going with it and enjoying yourself is by far the more playful option. 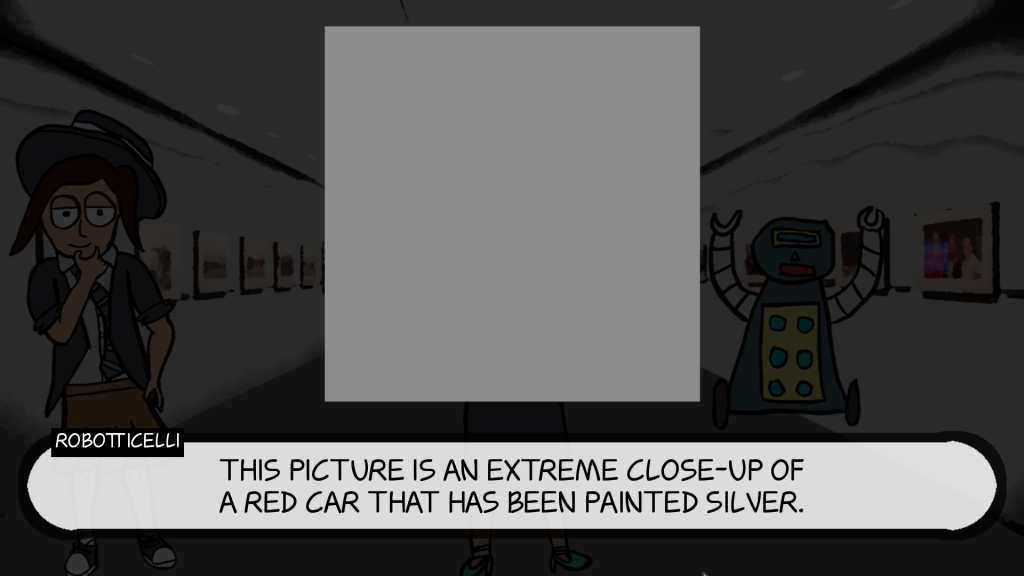 Sex Robot Road Trip exceeds expectations, playing with amusing ideas and themes while being surprisingly funny.  Its branching paths are structured in such a way that it’s easy and straightforward to find all the other endings, once you’ve found one.  Though the graphics won’t win any design awards any time soon, they’re self-consistent and work well enough for telling the story.  Overall, a fun way to spend a few hours, or perhaps less if you don’t choose to find all of the endings.