Robothorium is set in 2052. Robots have been installed with artificial intelligence to allow them to better perform the jobs that humanity has given them. Not all is rosy for humanity or the robots, though, as that same artificial intelligence has allowed the robots to realise that their creators treat them like mindless slaves. Rising up against humanity, the robots now fight for freedom and their right to make choices for themselves.

The five different robot-related factions that have formed as a result of this revolution want to achieve robot equality through different means, however, and none of them can agree. You take the role of a disembodied artificial intelligence, S.A.I.A, who was created to unite these factions and lead the robots to freedom.

Robothorium’s graphics are pretty nice in a cartoonish sort of way.

The viewport camera is fixed in position and rotation, looking at each room / encounter from the same viewpoint. While rooms themselves look pretty similar to each other, they’re colourful and well drawn. Each of the robot models has a unique look and when you fit them with different equipment it changes their appearance, too, which is always a nice touch.

Animations are good and weapon and special effects are, too, though after you’ve played a few battles you tend to focus on the status icons instead. The icons are mostly good representations of their effects, but the developers have also added a very useful array of tooltips almost everywhere. The interface is easy to use, but there’s no mention of the extra three skills available for each robot. (ProTip: click on a skill in the equipment screen to pop up a little window in which you can swap out that skill with one of the others.) 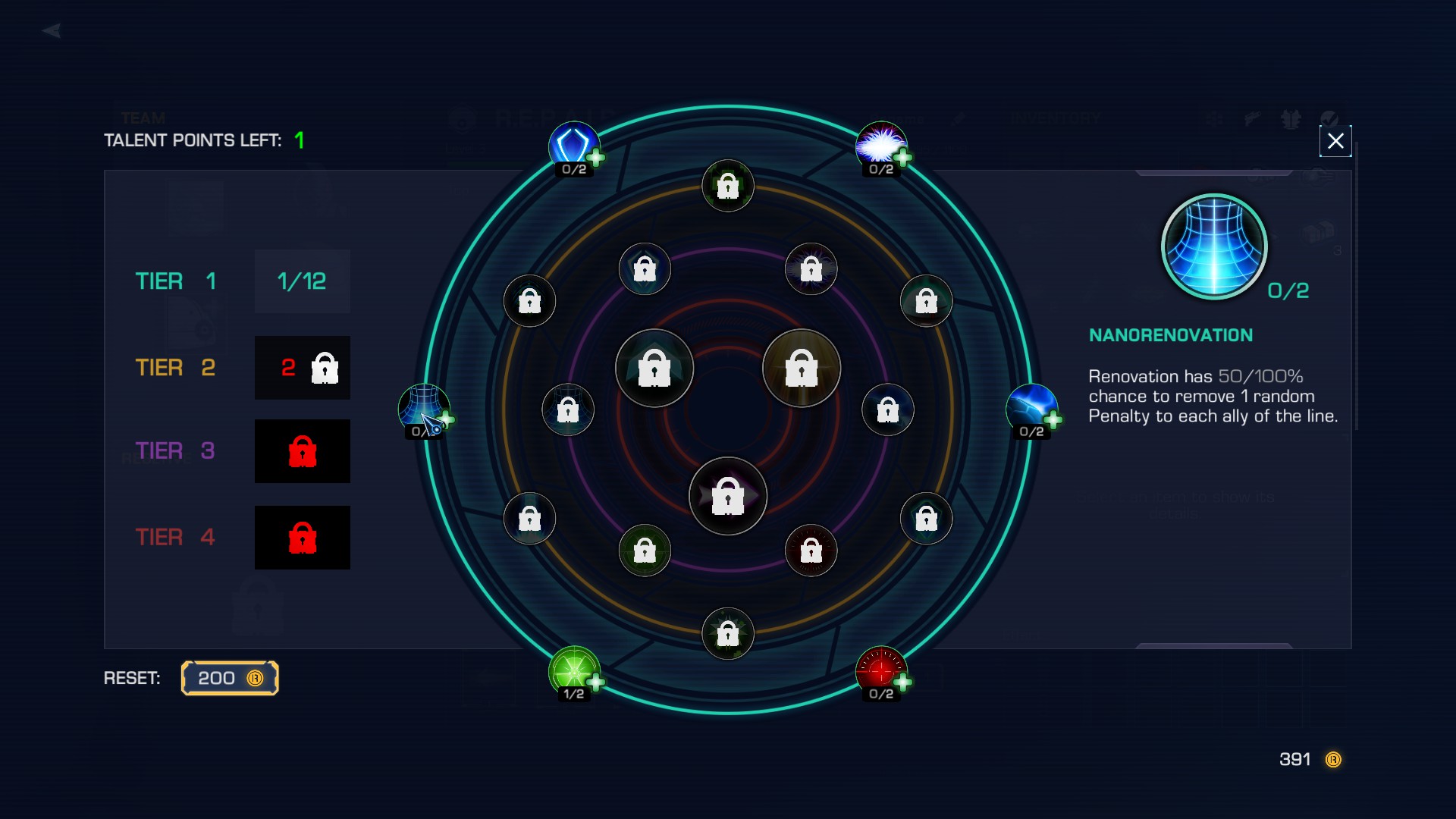 Music is excellent and fits the game’s setting to a tee. It’s all synth tracks, but there’s a good range of them, from light and airy when you’re fiddling around with loadouts in the base to heavy combat music. Sound effects are good, too. There are no voices, but I don’t think they’re really needed.

The game world is interesting, but the script could do with a bit of work. It also needs a run through a grammar checker or by a professional editor before the game is released; there are a number of glaring errors.

There are no detail options or graphics settings beyond full-screen / windowed mode selection and resolution. Performance is usually good, but arena battles get laggy with time. Restarting the game fixes this temporarily. 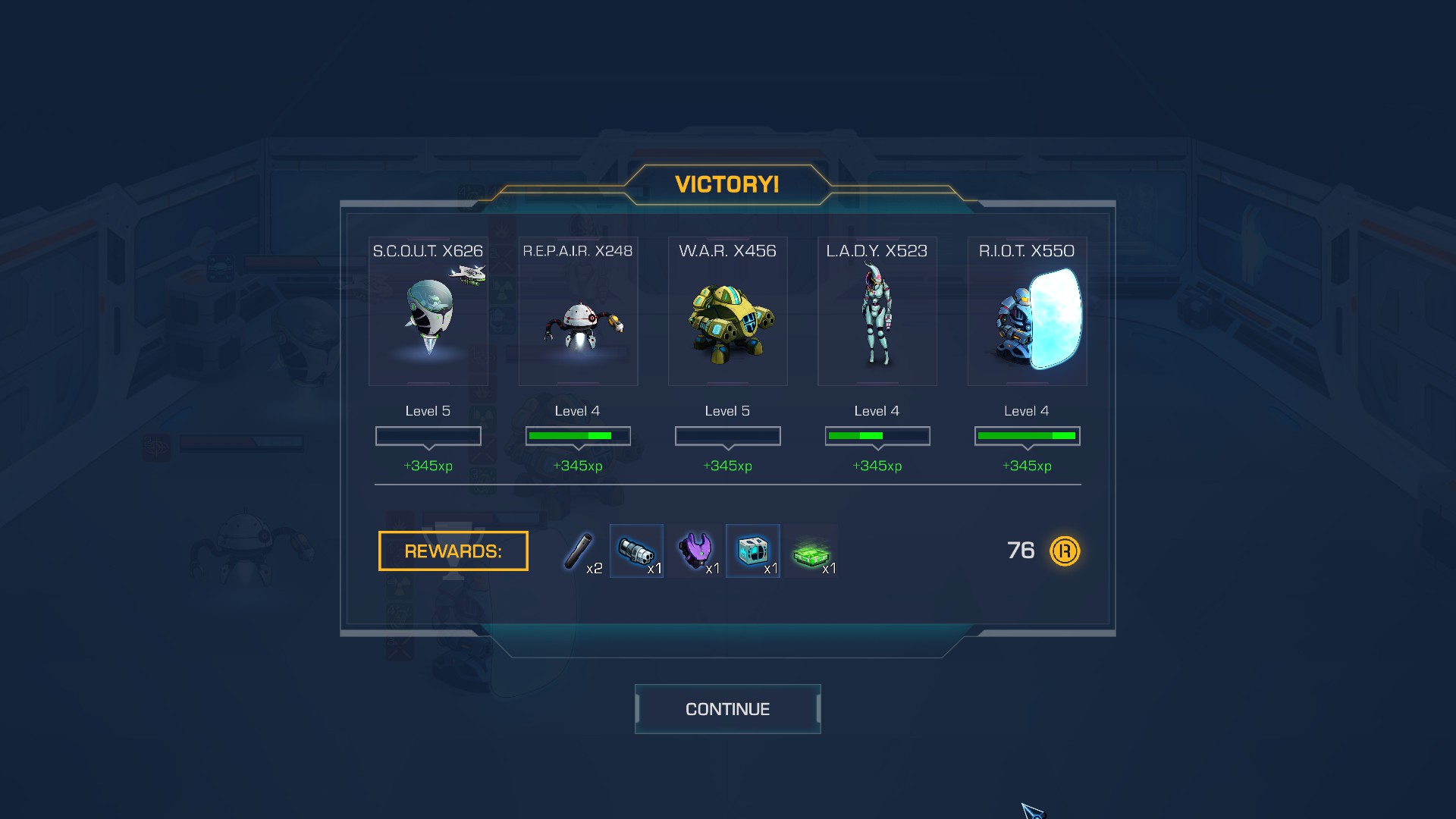 Robothorium is a turn-based dungeon crawler I’m not going to be drawn into the “is it a rogue-like” argument. Instead I’ll just say the game includes some rogue-like elements, such as procedural map generation and loot, and a sort-of permadeath at the highest difficulty (not yet implemented). The core of the game is the single-player campaign.

When the game begins, you select three robots from a choice of six. There are only five models to choose from, however, and individuals of one model differ only by their personality, which provides small bonuses to two of the base characteristics. You’ll encounter a sixth model in game, but you can still only have up to five robots in your team at any one time. Enemy groups comprise up to six individuals. 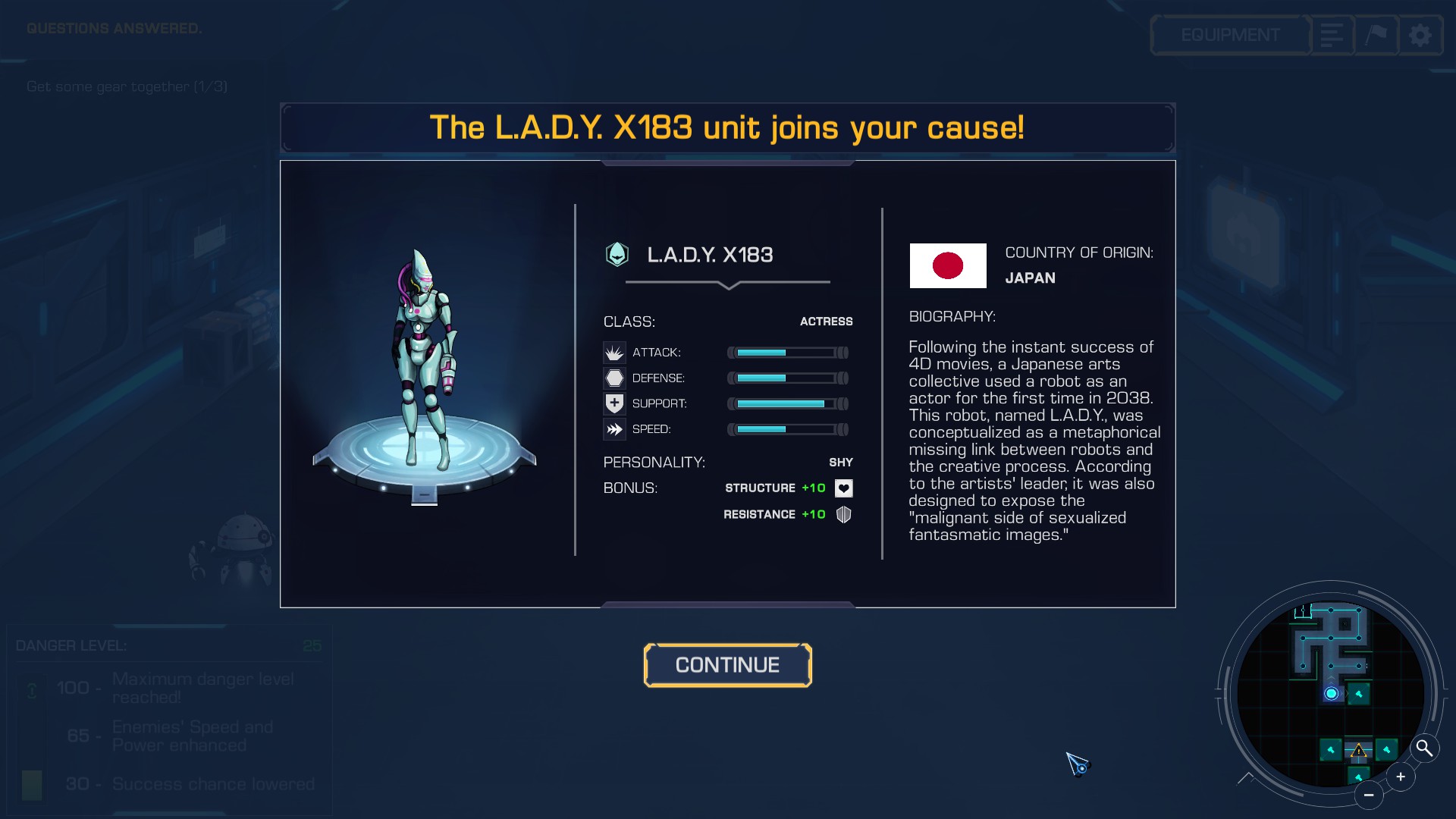 Between robot models, differences are much larger. Each model has unique appearance, basic attack, and special ability, which isn’t unlocked until you’ve completed a few missions. Each model also includes six active skills, of which you can only have three available for use in combat at any one time. Strangely, it costs in-game currency to switch these around, penalising you for experimenting with the choices available to you.

Once you’ve chosen your starting robots you need to escape from a facility in which you’ve been imprisoned. This functions as a sort of tutorial dungeon. 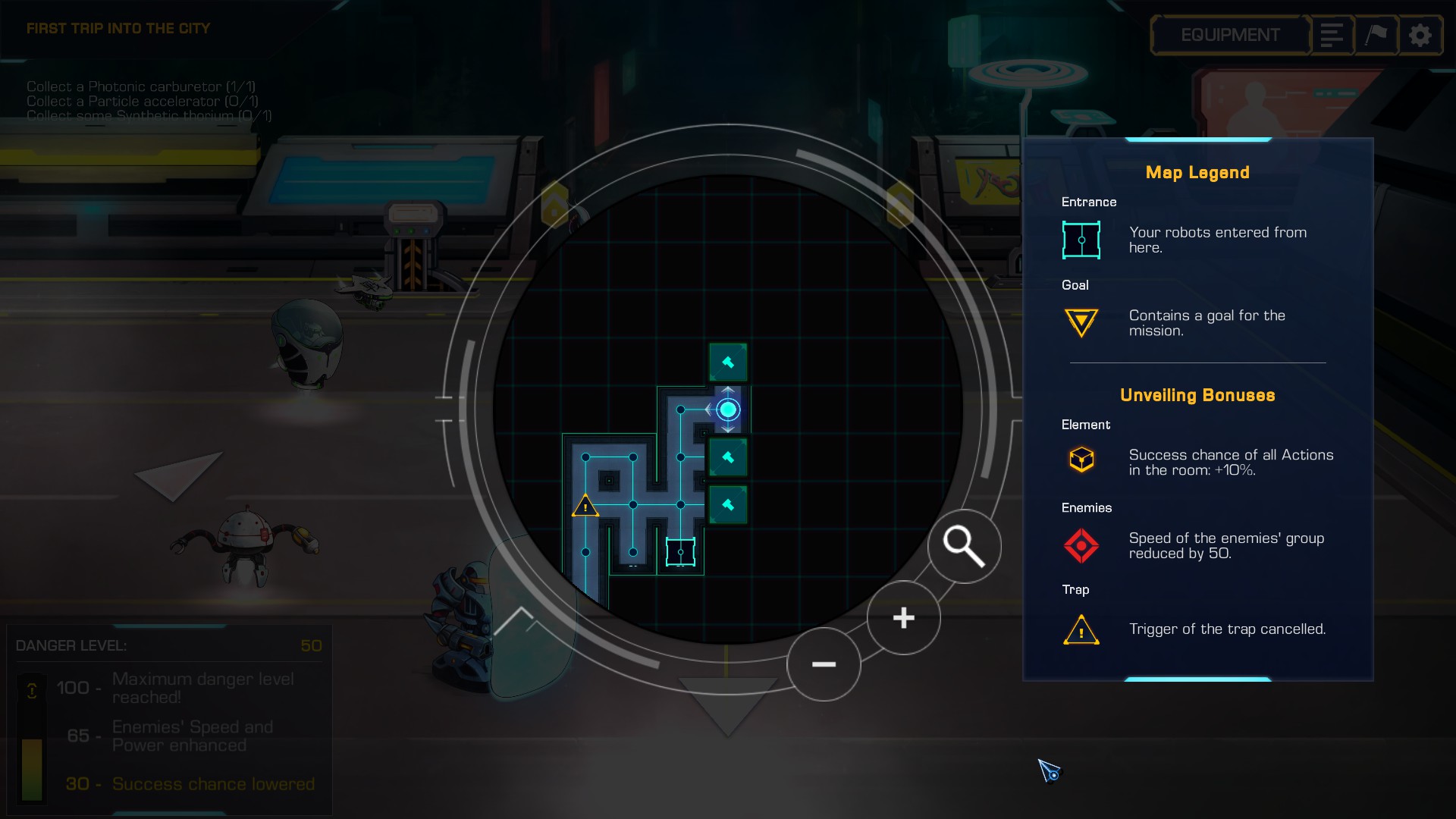 Basic gameplay involves moving about each mission one room at a time. You don’t know what each room holds until you visit it: nothing, an interactive object (security camera to hack, container to open, etc.), an encounter, or a trap, for example. This is another disappointing design decision: you can’t avoid traps or encounters most of the time, since you don’t know they’re there until it’s too late. If you’re lucky you’ll encounter a camera to hack before you stumble across the part of the level that the camera covers, but just as often you won’t find the camera until after you’ve already encountered the trap or enemy group.

When you do encounter an enemy, combat begins. This is turn based, too, and plays essentially like any turn-based JRPG combat. Robots act in order of their speed and each can take one action each turn. Robots don’t move, so these actions are normally limited to a choice of five: basic attack, special attack (if charged), or one of the three active skills you’ve chosen for that robot. 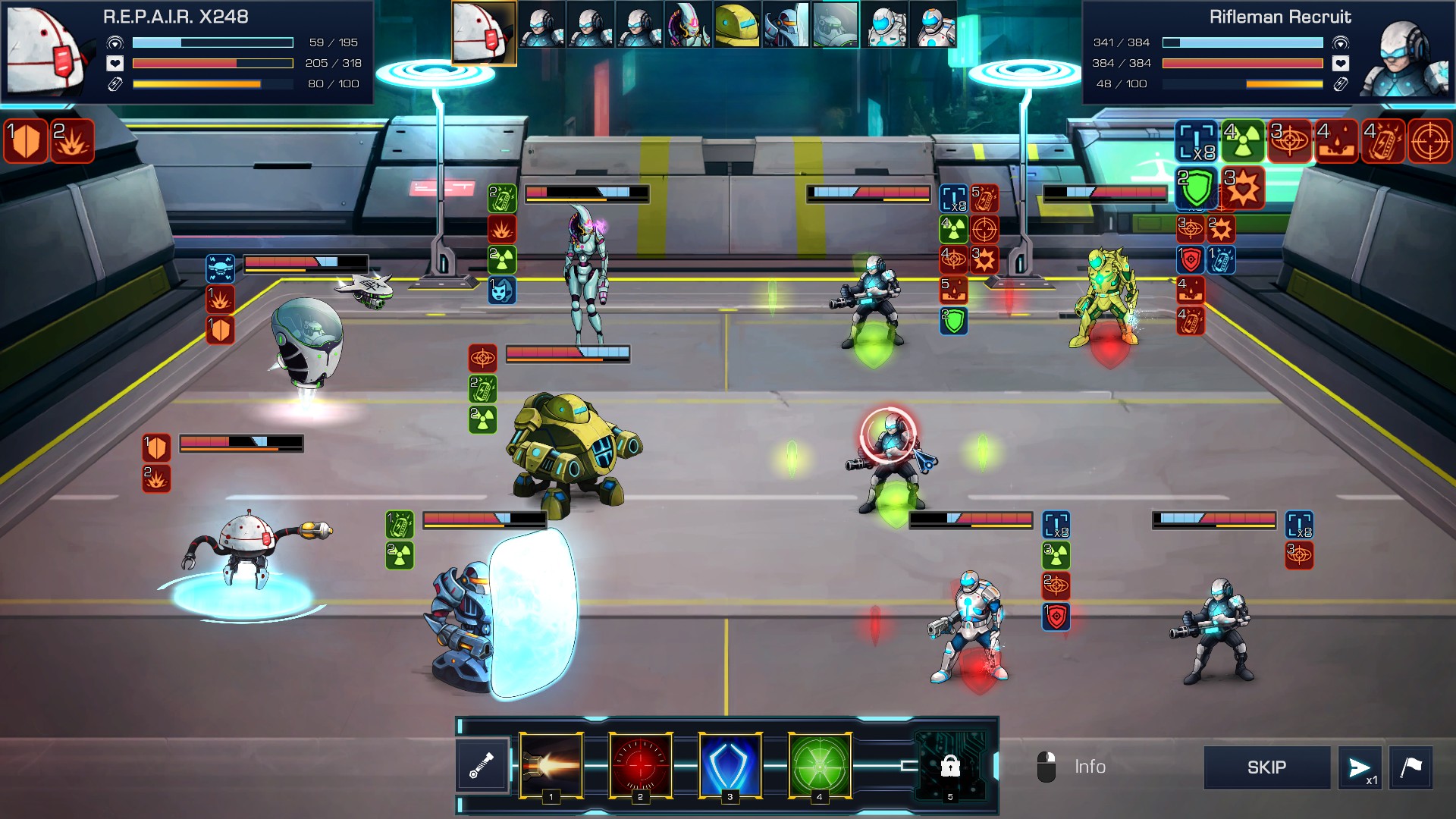 Each robot has structure (health), which doesn’t recover until the end of a mission, and shield points, which protect the structure and partially regenerate each round, as well as through various buffs. When shield points are empty, damage hits the structure until the shield recharges; when structure is gone, the robot ‘dies’, which has a different result depending on the difficulty.

Each robot also has an overload bar. Using an active skill or special ability adds a set number of overload points. When this reaches 100, the robot is overloaded and effectively stunned for the next round, during which overload drops to zero. Apart from the sixth robot model, using the basic attack reduces overload. Random loot is found after each combat and mission, with weapons and armour being applicable to only a subset of all the robot types, but it’s mostly pretty boring: simple bonuses to characteristics. There’s some basic crafting, but it, too, seems pretty limited so far. 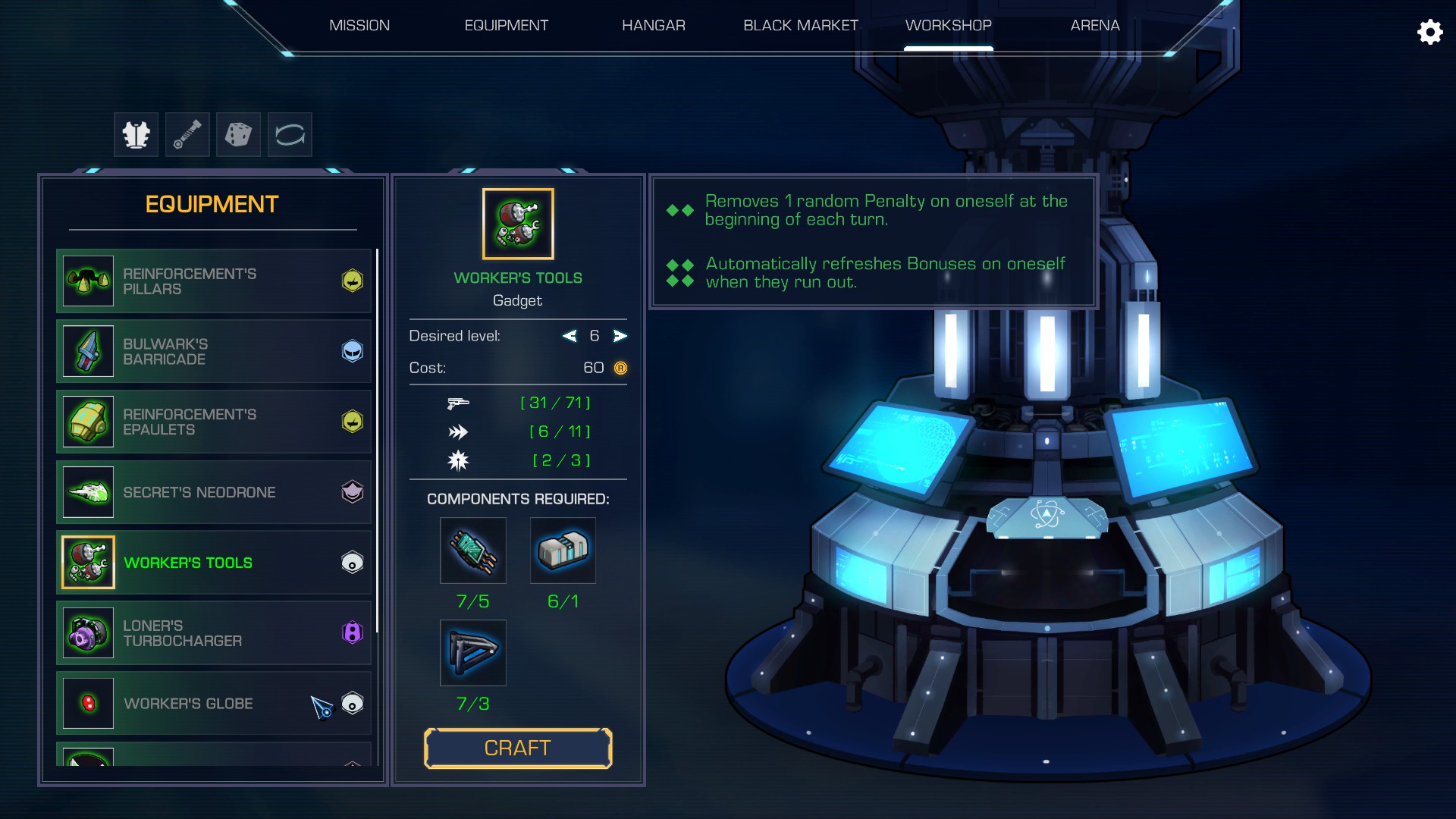 Combat is simple, but still tactical enough to provide multiple alternatives, though it is very buff/debuff heavy; you’re almost always better off stacking bonuses and penalties than just going in shooting. But very quickly every level starts to feel basically the same. To make it worse, the enemies you encounter level up with your highest level, which completely ruins any feeling of progression, especially when each combat sees you fighting enemies from a very small pool of available types. There’s also no mid-mission saving, which is bad for anyone without large chunks of free time.

Though the game’s claims multi-player support, it doesn’t deliver the interactive experience you’d expect. The arena lets you battle against another player’s robots, but it’s a one-sided battle; the defending robots are A.I. controlled. Your opponent also seems to be completely random, rather than level-matched, making for some very one-sided battles. 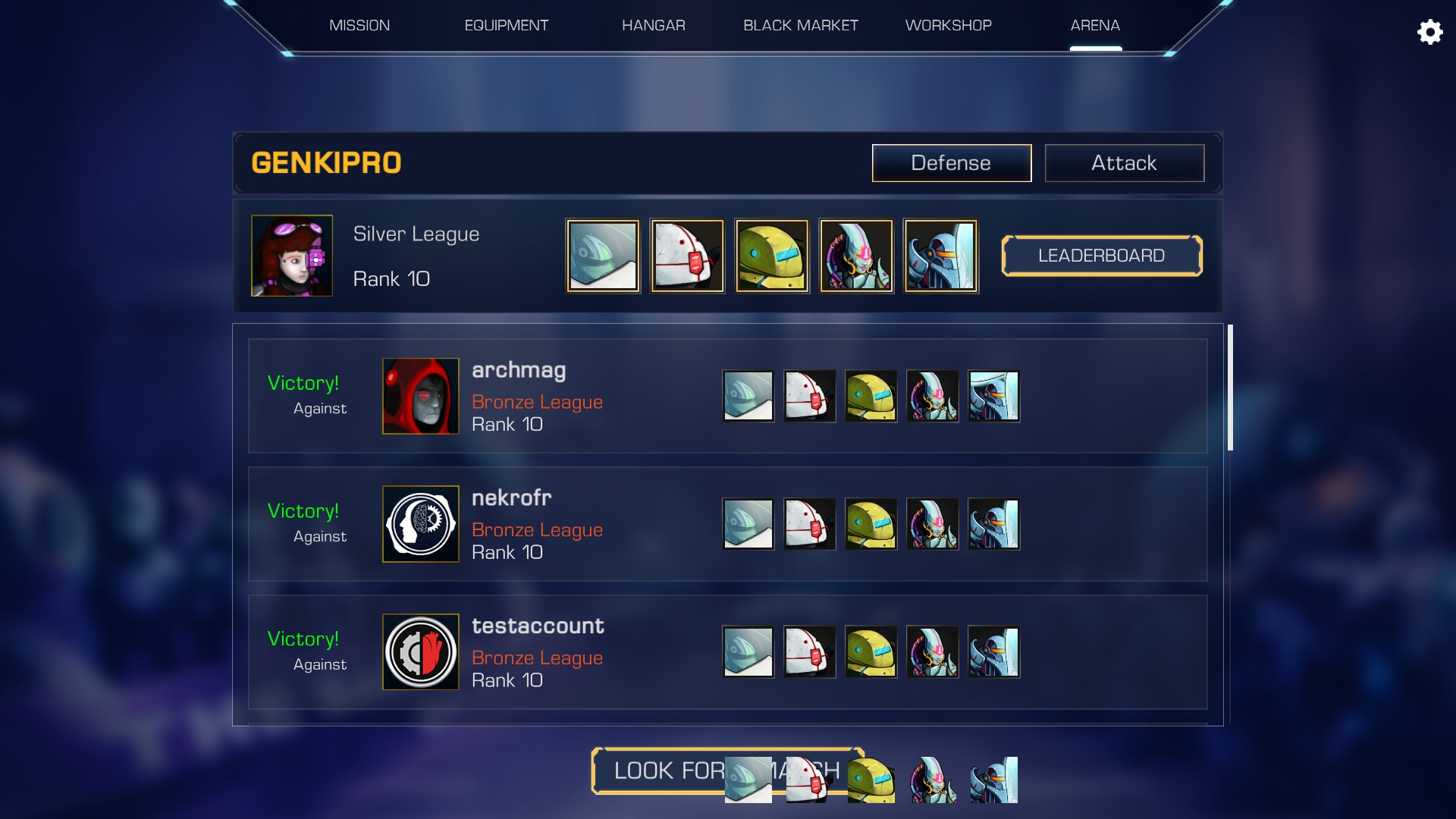 Robothorium also seems quite buggy, as you might expect from an Early Access title. The worst two issues I saw were unlocked sectors not unlocking, and abilities and upgrades that simply don’t work as described.

So far, Robothorium: Rogue-Like RPG shows potential, but it still needs a lot of work. With such a limited number of robots and enemies available it’s inevitable that combat devolves into the same thing every time and this is only exacerbated by the boring loot system. Having enemies that level with you destroys any feeling of progression, making the game seem even more stagnant.

Recommended, but only just. I really hope it gets better.