Dark Quest 2 is a decent turn-based RPG set in a grim fantasy world. It doesn’t have the most original storyline, characters, or setting, but overall it is done pretty well and fans of dungeon crawlers will love its tactical gameplay and increasing challenge.

Dark Quest 2 is a turn-based RPG dungeon crawler. The storyline kicks of in one of the most classical of ways: the king is dead, an evil sorcerer seized the castle and his horde of minions is ravaging the lands, bringing death and destruction. Only a handful of valiant heroes are left, and they gather in the last free city of the kingdom where an Elder will task them with various quests aimed to destroy the enemy forces and save the land. Even if the story is quite the fantasy stereotype, it isn’t so bad.  Players are placed in command of a party of a maximum of four heroes chosen by a pool of six, each with their own abilities and attack types other than different values for passive traits. The combat is turn-based and not very complex at that, but does the job and provides a good challenge in some levels.

General Gameplay
In Dark Quest 2 you will have to manage a company of heroes in their quest against the Sorcerer. To do this, you have an entire city at your disposal with different functions: a blacksmith will forge you new gear to give to your heroes, for a price in gold. Some pieces of gear can only can be given to specific heroes, some others to anyone. These pieces of gear will have different effects, such as more movement points per turn, more damage per attack, inflicting damage on enemies that attack you, or more uses for spells, and more. Each hero can equip a maximum of two gear pieces. Then you have the Alchemist, selling powerful potions to aid you in combat, such as health regen, refresh abilities to use them again, damage reduction and so forth. Also in this case, there are two maximum per hero, except the Monk, he can carry only one.

There are several other facilities in the city. First off is Gravedigger, where you can resurrect dead heroes for 20% of your gold in exchange.  Taver is a place where heroes can rest to regain full HP, 50 gold each.  There is the Brothel, where your heroes not only can have some “fun” but also receive a random bonus in their next level. For financial matters there is Merchant, where you can sell items you find in dungeons such as jewels and gems, for gold.

The campaign levels are articulated in a map. Finishing a level will unlock all the ones linked to it, some levels are special rooms filled with treasure, but are on the edges of the map and difficult sections are before them. Each level has a set number of heroes that can participate, not always four, but often three or two heroes are a maximum, forcing you to make difficult choices for party composition. Campaign missions are quite varied and provide a good number of different enemies, situations and objectives, like liberating prisoners, collecting pieces of an artifact, or killing a boss.

Each hero has a dedicated skill tree with unique abilities, they can be upgraded by finding Blue Potions in levels as each level has a set number of them, plus there is a bonus one awarded for defeating all enemies. Other than skills, heroes also possess attributes, which are Courage, Sanity and Perception, all used to pass skill checks in specific situations or resist enemy effects. For example, Perception is used when looting corpses or avoiding traps, while Courage is used to resist Fear spells. Some items can enhance attributes slightly.

If all your heroes die you get nothing from a level, while Retreating gives you 50% of the gold you gained and you can keep all the blue potions, so escaping can always be an option if things are looking grim. The fact that you can repeat a level any number of times to accumulate blue potions and gold is good on one side, so you can level all your heroes enough to overcome more difficult levels, but on the other it’s rather boring having to do the same level several times to get enough potions to upgrade all your heroes to their best.

Combat System
The combat in Dark Quest 2 is turn-based, each character has one movement action, one attack action, and one skill action per turn, and so do enemies. Damage types are Physical, Magic and Chaos. The first two can be avoided respectively by parrying or evading, with anti-magic shields or special protection skills, while Chaos damage is unavoidable in all cases save for the Priest’s barrier spell.

Bear in mind each enemy has a different percentage of scoring a melee or ranged hit, damage values, damage type, parry chance, all these things can be seen by hovering on an enemy and must be taken into account to choose the right hero for the right situation. A balanced team composition with support characters, frontline melee and also distance fighters will be paramount for success, as enemies will become a lot tougher in the later stages of the game.

Overall, the combat of Dark Quest 2 may not be complex like some other turn-based RPGs, and sometimes I found it a bit too tied to RNG, but still it can provide fun and is overall well balanced.

Content
It took me around seven hours to finish all the levels. Other than the campaign, a level editor is available to share custom levels on the Steam Workshop and download other players’ creations, a nice addition, but with a quite complex and professional-looking editor that needs dedication to learn.

Balancing
I found all classes and enemies to be fairly well balanced, with no particular thing stood out as broken or underpowered.

Challenge
This game can provide a decent challenge and is engaging enough. 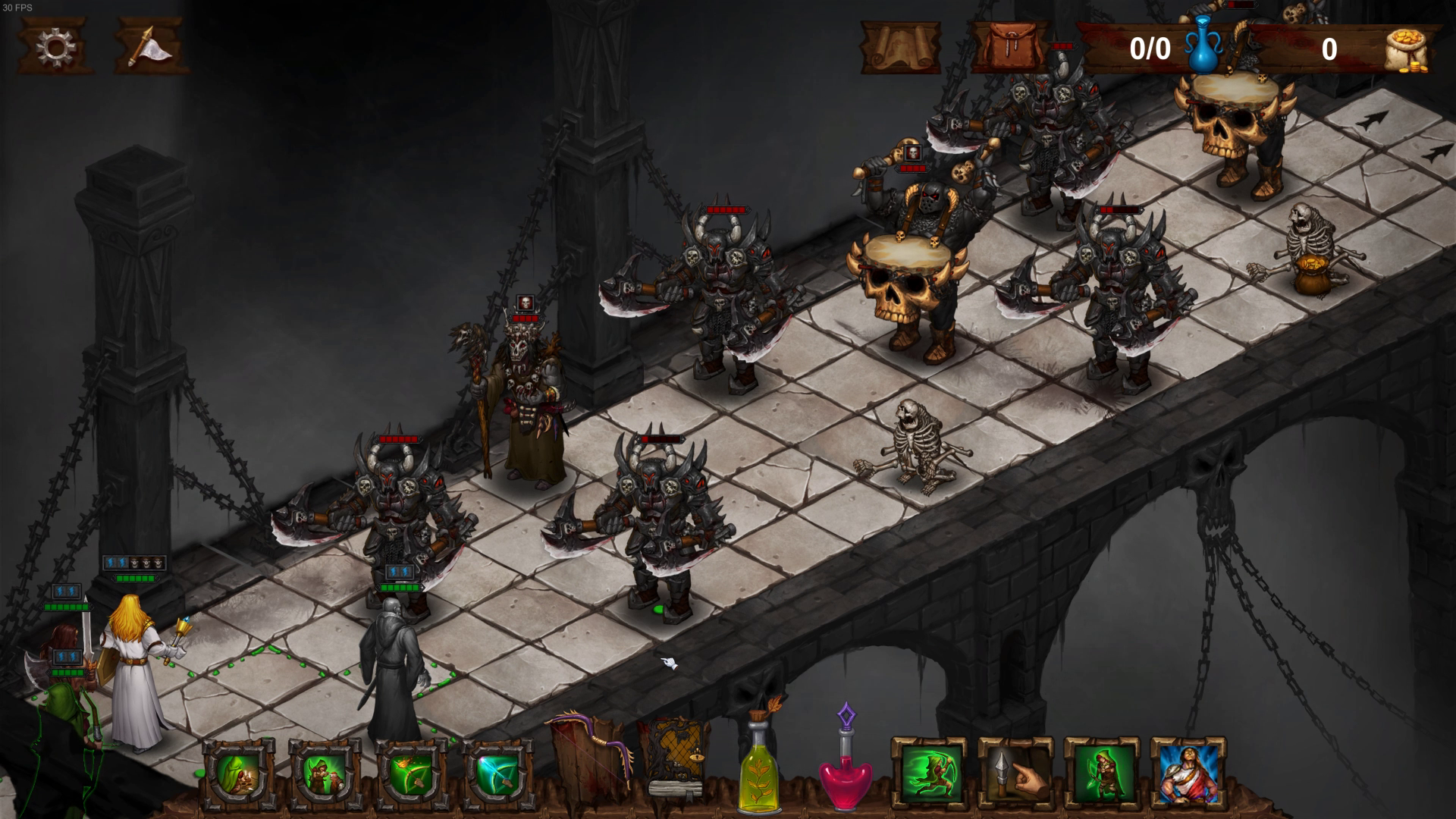 Graphics
The hand drawn 2D style has its charm, and while the animations in the cinematics are a bit wonky and weird, overall the art style is good and different from what we’re used to seeing. It’s a nice depiction of a grim fantasy world. Don’t expect modern effects and graphics, since everything is hand drawn with 2D sprites.

Sound
There is an average sound compartment with no particular thing standing out.

Performance
Nothing to report, should run on a toaster.

Quality of Life
Some things could use a rework, like showing in the quest map how many Blue Potions each level contains without having to enter that level, the same goes for gold and enemy numbers. There should be an option to better select a character when they are covered by enemy models, as many times it happened that my characters were very hard to control because it was overlapped by enemy models. 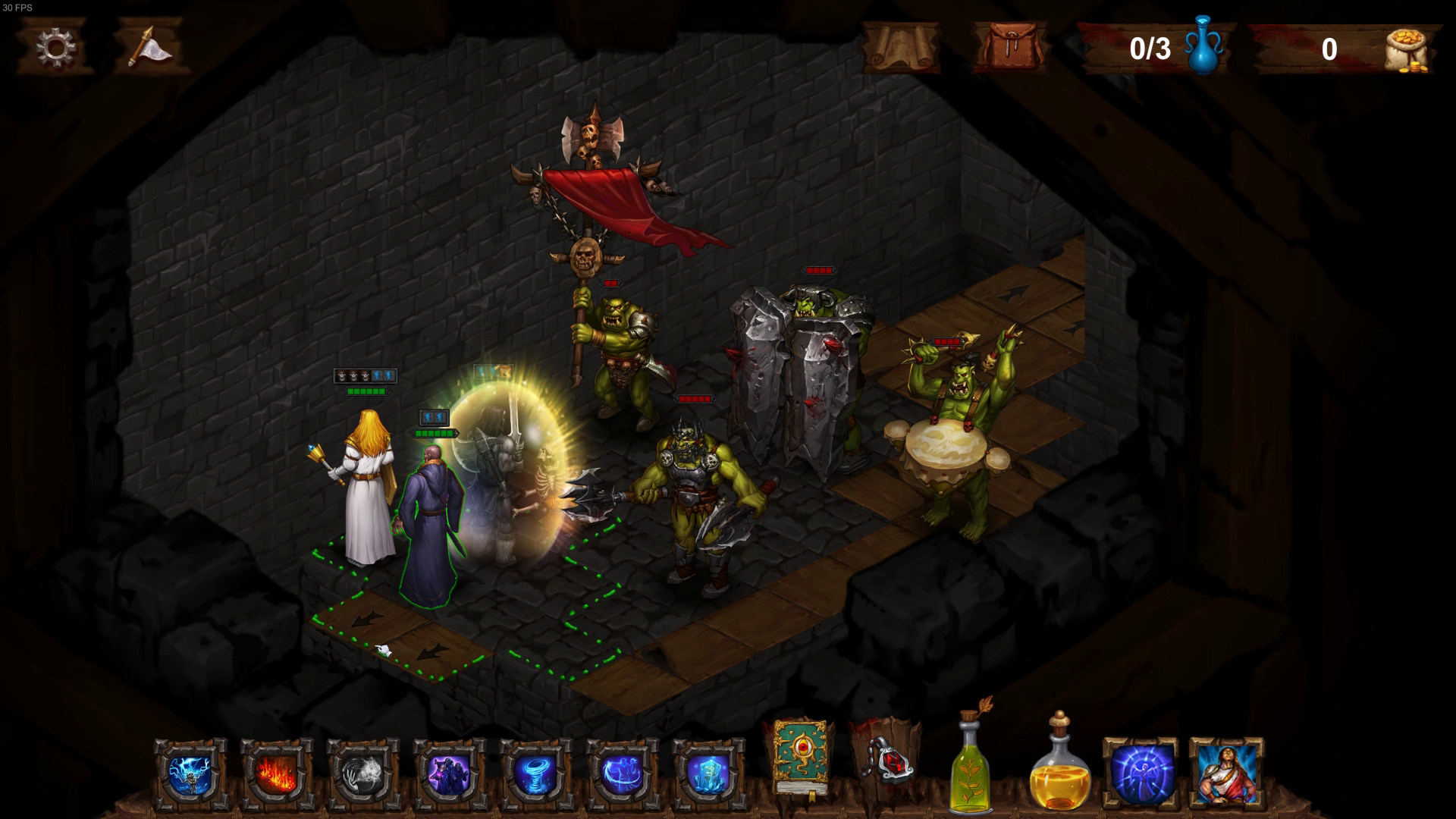 Dark Quest 2 is a rather basic but satisfying turn based dungeon crawler that can give players some hours of fun at a budget price. The editor has potential and is definitely a nice addition. I’d say if you like turn-based and want something a bit different, try this.