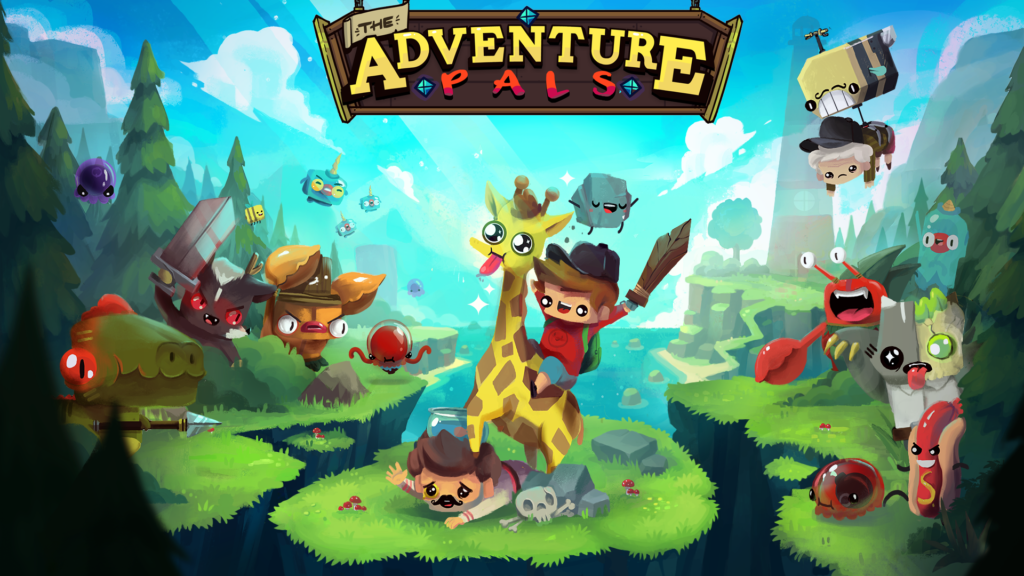 The Adventure Pals is a perfect game to introduce kids to platformers.

The developers Massive Monsters are veterans from the Flash scene, and after a successful Kickstarter, they graduated to a fully fledged commercial game on Steam and consoles. The outcome is The Adventure Pals, a cheeky platformer which can played in single player or coop with an aesthetic inspired by the cartoon Adventure Time. I am myself a veteran platformer, and I will be the judge of the result. Call me The Adventure Judge.

The Adventure Pals started off brilliantly. I was instantly hooked by the quick and funny introduction to the game, as Mr. B captured our hero’s grandfather and the other elderly people of the land to turn them into hot dogs. Before our grandfather disappears, he left us with a great friend and useful platforming tool: a giraffe buddy to carry on our back. This giraffe can be used as a grappling hook to swing along specific hooks or as a wrench to trigger switches. I absolutely love its goofy helicopter tongue when slowing down a fall (think of Rayman’s helicopter hair but sillier). The ridiculous animations extend to the witty writing, so good that I was looking forward to each new speech bubble or character to talk to. It’s often edgy, but nothing alarming if you plan to put this game in the hands of children. Even the interactions with the environment are hilariously twisted, as slaughtering the innocent wildlife rewards you with coins and achievements. That is if you can catch those pesky backflipping rabbits. 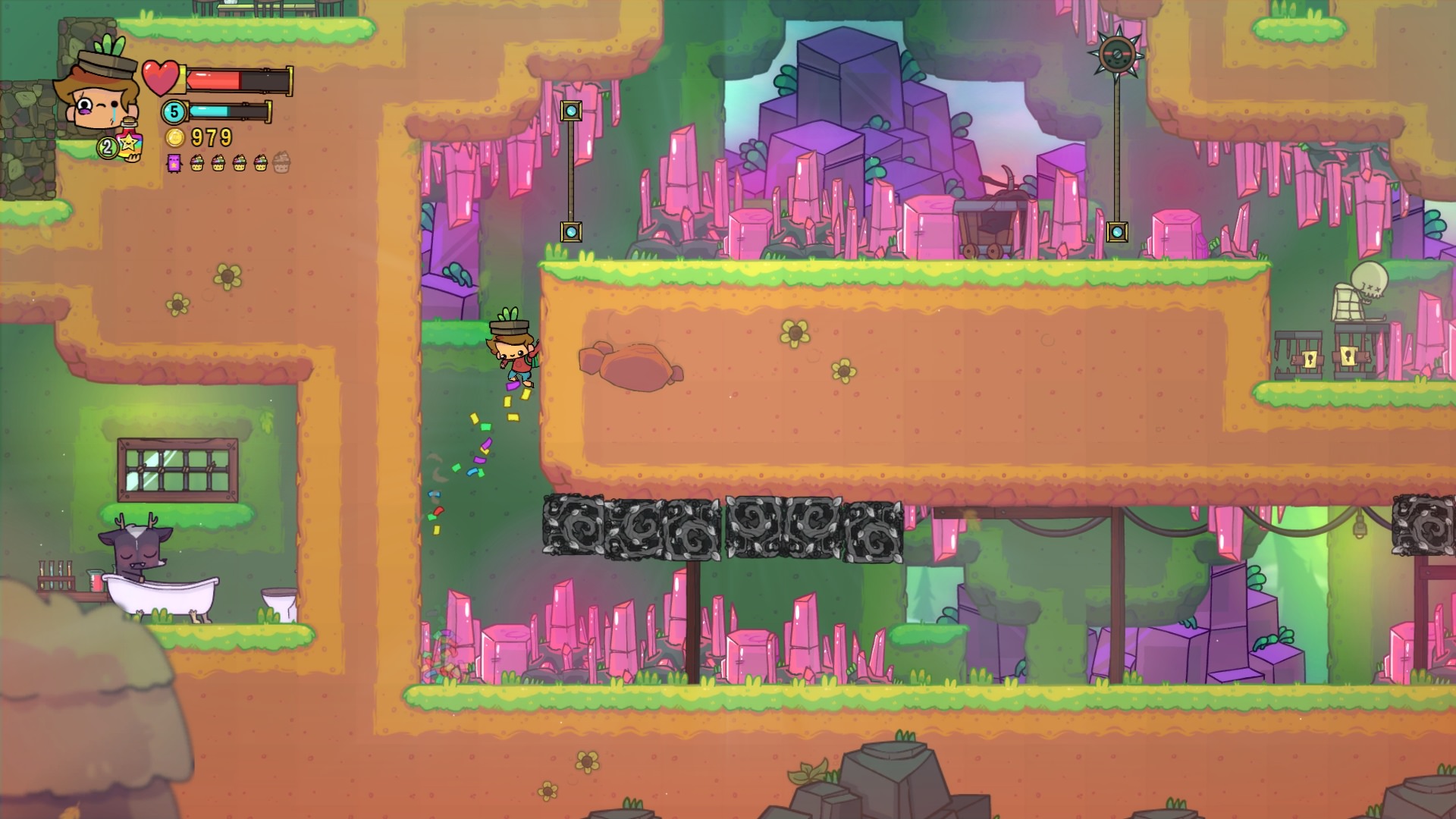 I often felt like a villain while navigating through the levels. In the background, there are signs that the place is inhabited with huts and things like that. Our hero is stealing gems from the local monsters, and most of them never did anything wrong. The gems are supposedly needed to pay back the ransom for our grandfather, and our hero helps other villagers along the way. They sometimes accompany us on our journey and gratify us with their quips. 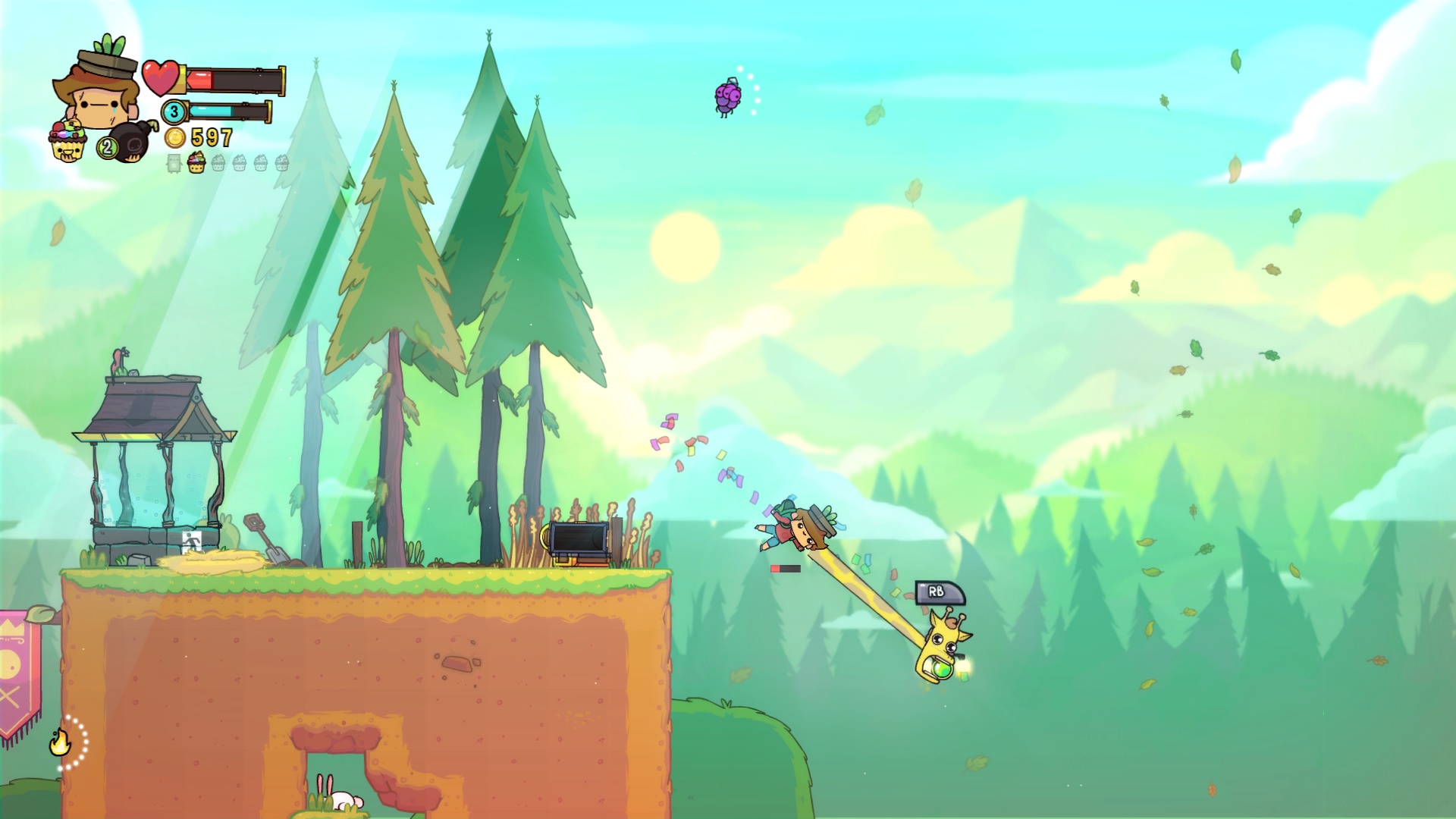 Now that we have covered the brilliant presentation, let’s focus more on the gameplay. The game runs like a charm. There is no double jump, but wall-jumping is here, and the helicopter fall as I mentioned earlier. Fighting can be accomplished by squashing some enemies like Mario, but most often it’s about brawling with the sword. It’s button mashing, really, and then there are unlocks to add a few possibilities but it never changes the base button mashing. I would say that it’s satisfying and yet it becomes too repetitive, so I did not exactly enjoy the numerous fights, especially when enemies had shields. Each new world brings a small addition to spice things up, such as bomb tiles that explode as you touch them, or a remotely controlled bee to open access to another part of the level. 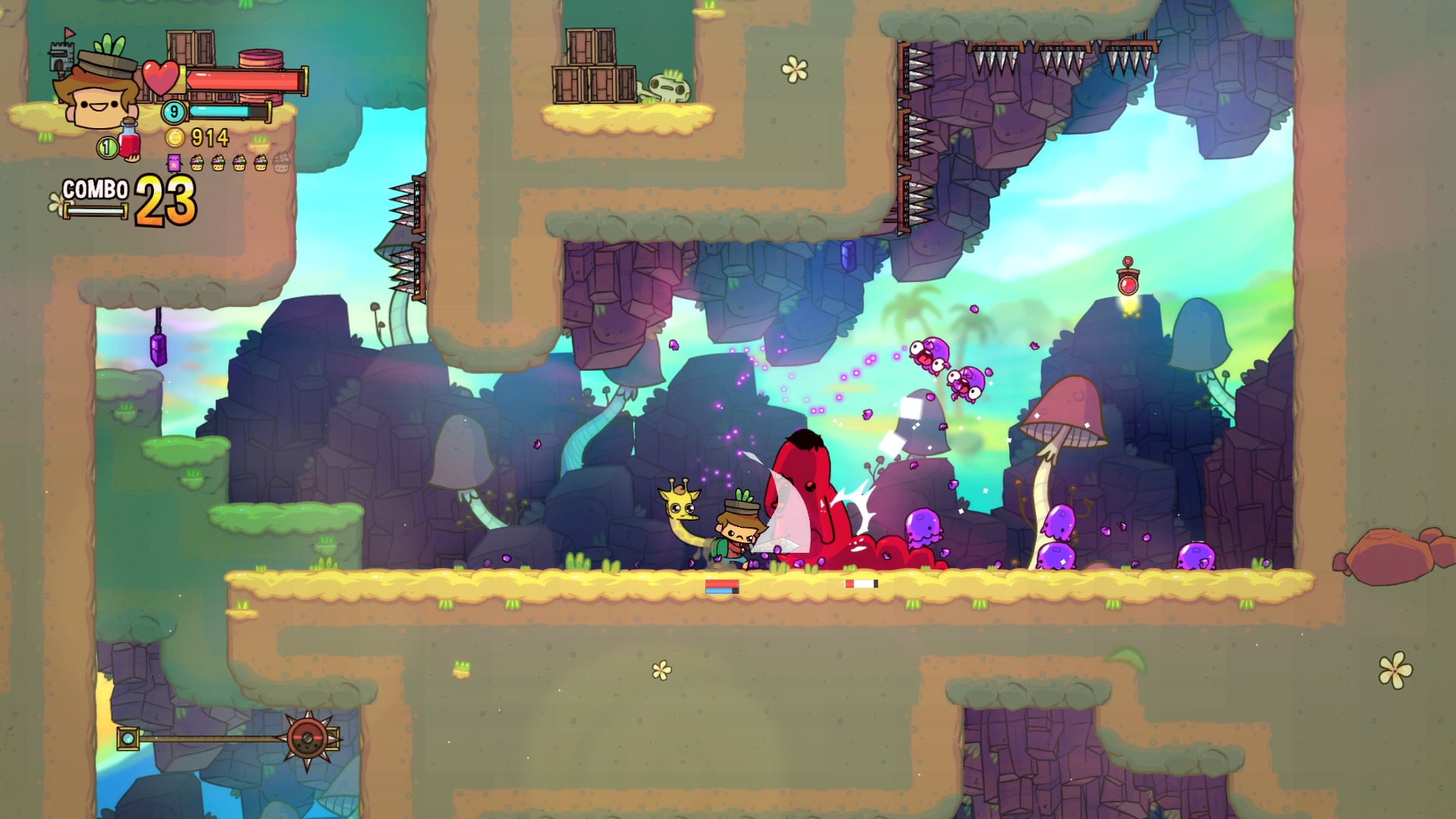 The levels always hide one secret collectible, and that’s where cracks start to appear in the game’s shiny, glossy shell. The collectibles are a bit more difficult to access, but not exactly a secret most of the time. They are not hard to find, and that is part of the problem. When you reach a crossroads, you know that one way is the collectible and the other way is towards the exit of the level. You just randomly choose one, and if you have been making too much progress without finding the collectible or if you reach the exit, you realize that your coin flip was wrong and you need to backtrack to the collectible, then backtrack to where you were. Level design often has trouble hinting which path is which, this is not a big issue but as the game goes by I started to notice that this problem was widespread because the levels are all built from the same ilk. 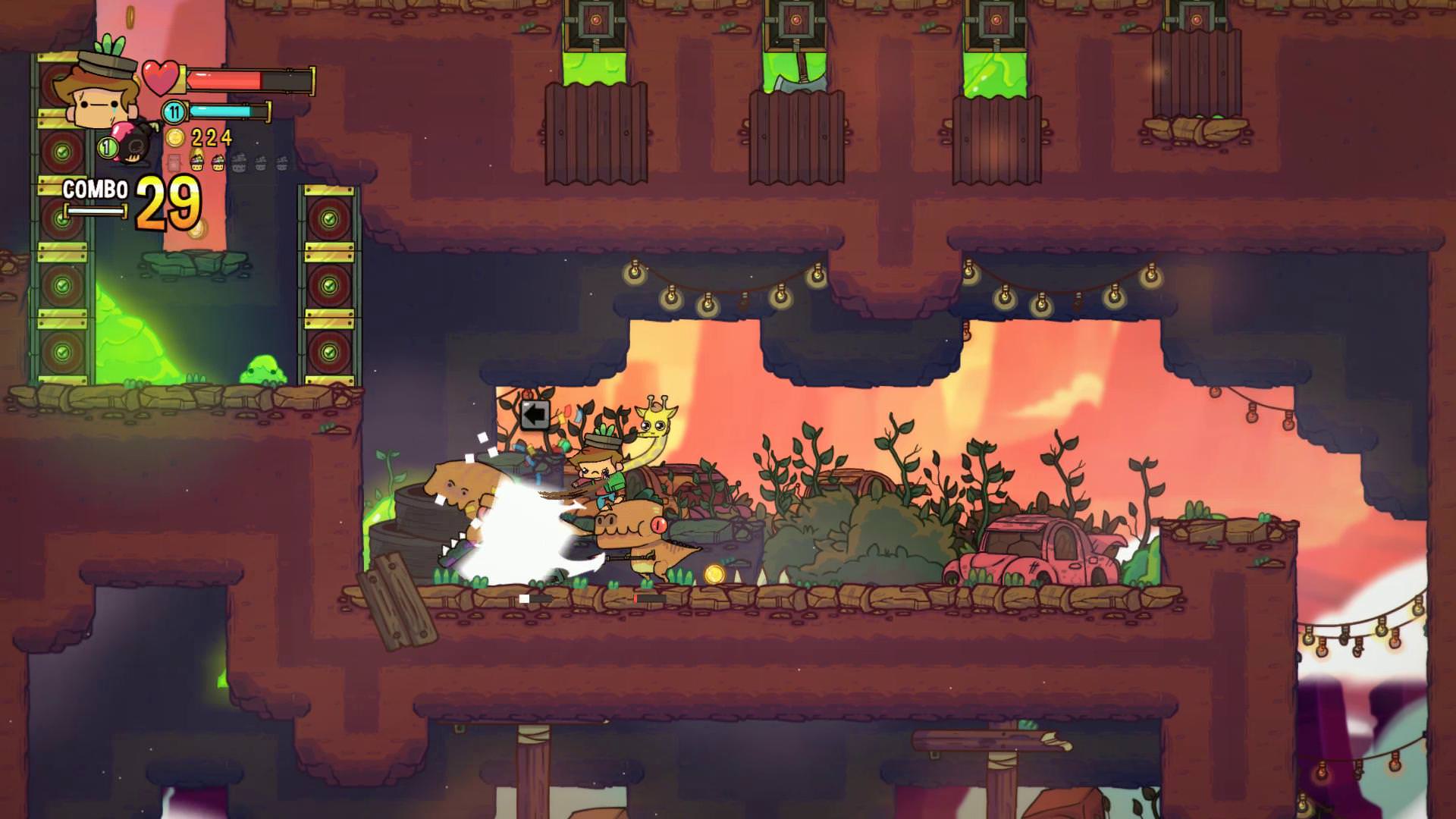 All the levels are built from the same pattern, with the same activities and actions to perform. There is no specific one that stands out because they are all the same, with the same balance of wall-jump, a few groups of enemies, a few traps to avoid and a collectible at a crossroads in blocky levels that coil on themselves. Despite my enthusiasm for the game, I found it harder and harder to push myself to jump into the next string of identical levels. Add to that the fact that the fighting is simple and repetitive and that the gameplay adds nothing original that has not been seen in other games, I had less and less incentive to progress. Eventually, I was burned out and I quit the game. 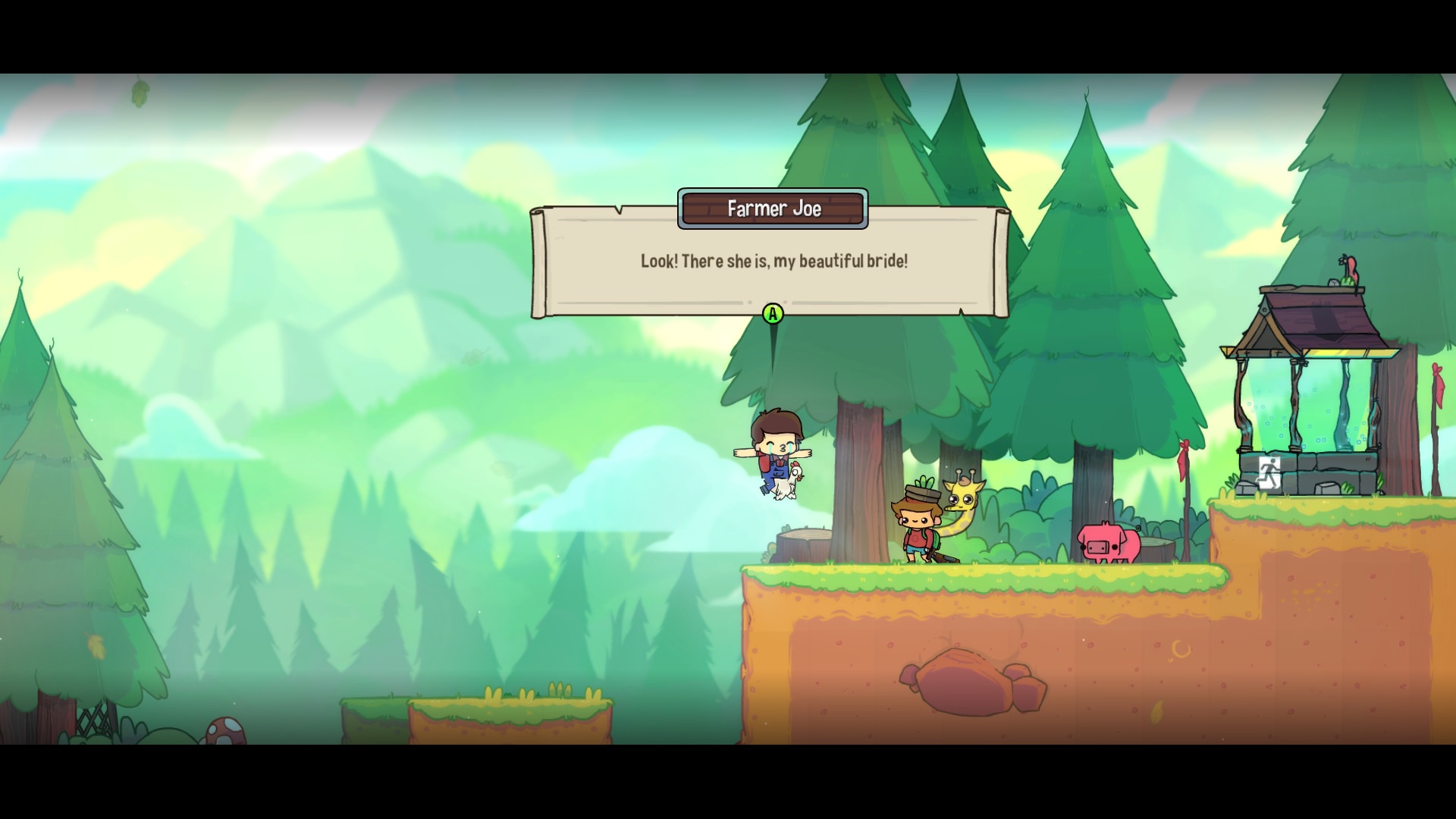 As a reviewer and veteran platformer, my expectations are probably too high. I want to be entertained by the next new original thing that will make platforming feel fresh again. If a game is just another platformer, there are high chances that I will be bored even if it is a good platformer. It just bears the sin of not bringing anything new to the table. However, to most of the general public, this should not be as much of an issue. Not everyone has the time to play all the platformers that get released, and simply playing a competent one can be fun enough. That is why I do not want to judge Adventure Pals too much on innovating, but what I can’t forgive is the repetitive structure of the levels. 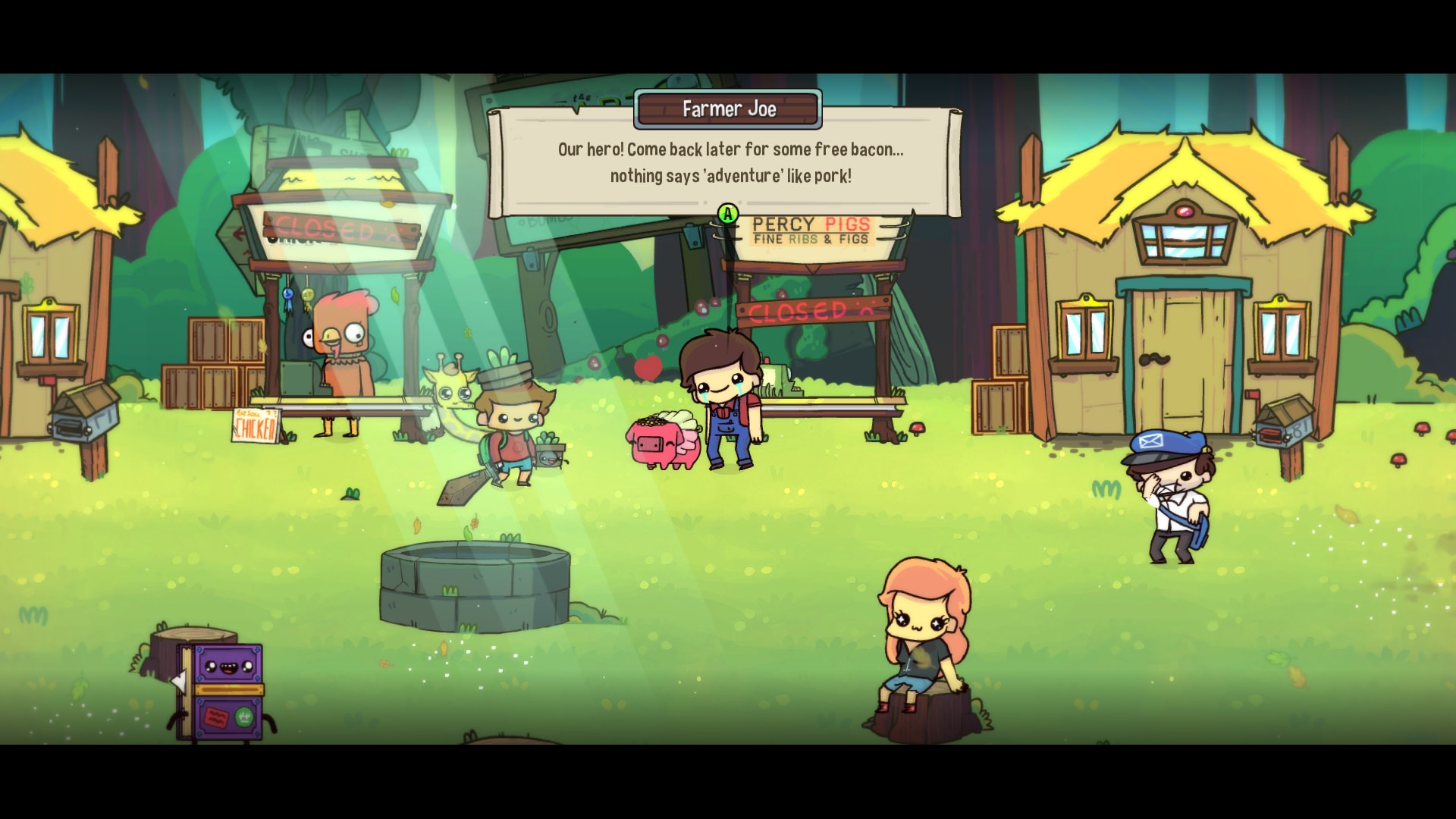 The Adventure Pals is funny, witty and has a particularly energetic feel that instantly grabs its players. However, the levels are very repetitive and drag the game down to a crawl. Since there is nothing really original, I would not recommend it to veteran platformers. Still, I think that kids would have a blast with The Adventure Pals, as the platforming is solid, the difficulty is perfectly balanced and the overall experience feels exceptionally polished.