Take control of three friends as The Apocalypse begins. Fight demons and werewolves, recruit survivors to your cause, and grow vegetables to make salad!

The game puts you in control of a group of three survivors of the beginning of the apocalypse, Hell-on-Earth style. While out camping one evening your group is interrupted by a pair of grizzled hunters being chased by a group of creatures that look like demons from a horror film. The hunters fight off the creatures as best they can, but soon they are surrounded. Making their last stand, they yell at your group to run, which you do, with not even enough time to ponder why they were equipped with a katana, a grenade, and a weird magical object. One wonders what they were hunting.

You stop your mad dash briefly as you crest a ridge overlooking the nearby town, which is now ablaze, and then run for miles until you collapse in a clearing miles away. Here you exercise your amazing harvesting, construction, and crafting abilities, and within hours have built a fresh water well, farm, and log cabin. With no sign of rescue from the establishment, you begin to build up your camp and venture out into the surrounding countryside.

The nice title screen and (faux?) 3D main menu with cel shading and fancy effects are impressive. These give way to a slightly less impressive introductory CG video; though the graphic-novel-like art is reasonably well done, the voice acting is rather bad and would probably have been better left out entirely.

The core game is played from an angled top-down view from a camera that you can freely pan and zoom — with a large range — but not rotate. The hand-drawn graphics that I thought looked really odd to begin with have mostly grown on me while I’ve been playing, with characters and enemies that are nicely animated and change based on equipped items and weapons. These contrast a bit with some amateur-looking world objects, such as buildings, resource objects, and dead bodies, and I can’t help feeling that they don’t quite fit together, even though the whole lot has a somewhat comic-like feel to it. There’s also no transparency when you walk behind objects, making for some hard-to-see situations on occasion. 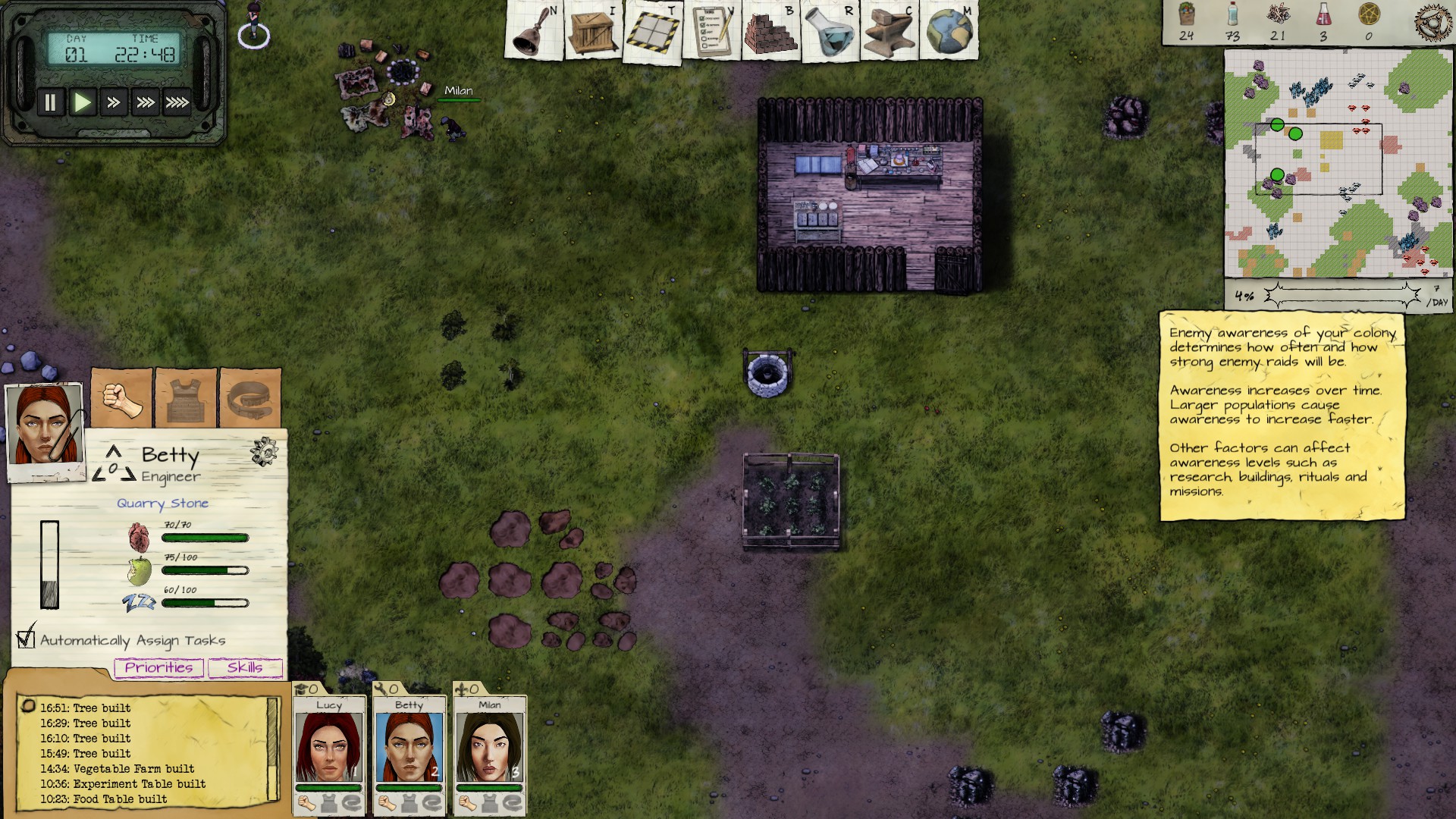 The interface takes a bit of getting used to, but after you’ve read the tutorial screens and played with it, it really starts to shine. Everything works consistently and the right-click information feature is a work of brilliance; I LOVE being able to browse each of the research trees and see exactly what gets unlocked, what effects each craftable item or weapon has, and what resources are required to craft it. There are a few grammatical slips here and there, though.

Sound effects are appropriate for the genre, but don’t seem to be properly normalised; some seem significantly louder than others. The title music is very nice, with a sort of slow build up and a western feel to it, but some of the other music — particularly during combat — can get a bit much, with its high tempo and volume adding to the panicky feeling of combat. That may well be the intent, but I didn’t really enjoy the feeling; that track also doesn’t seem to loop well either. 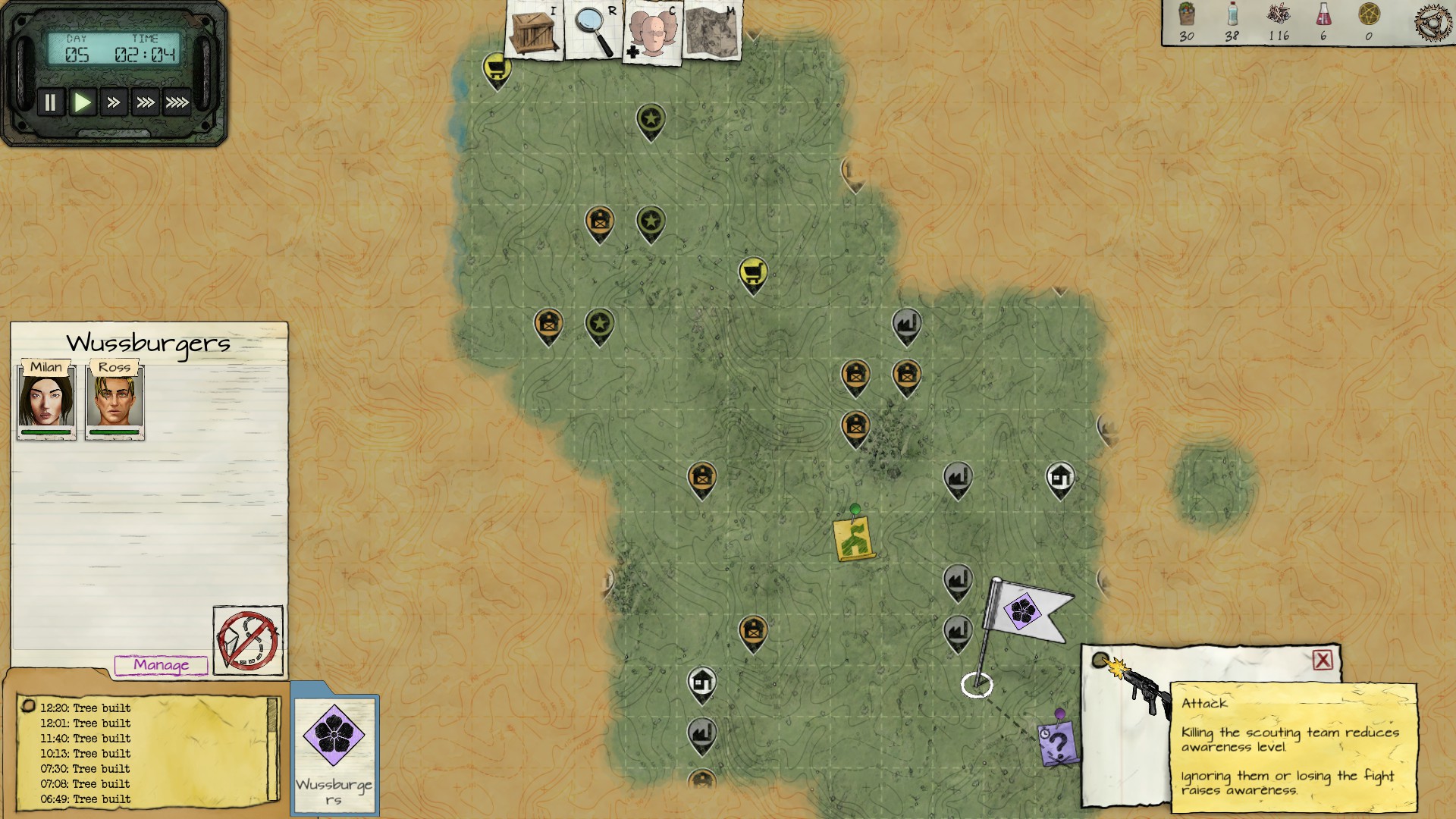 The game is divided into three distinct parts: base building, world map, and combat.

You begin with base building, which works like a relatively simple colony sim. You place building and object plans where you want them built and your survivors build them for you automatically with AI based on the adjustable task priority matrix. All the usual tasks are here — construction, research, crafting, harvesting, etc. — as well as some extra ones based on the setting, such as occult activities. Characters have job preferences and modifiers for different task types, mainly based on their professions.

As well as research, construction, and crafting resources, your survivors need to find food, water, and sleep to stay alive and effective. Characters gain experience allowing them to increase in level and improve a skill. As your camp develops the demons start to take notice, though, and you’ll suffer increasing frequency and severity of raids as you play. 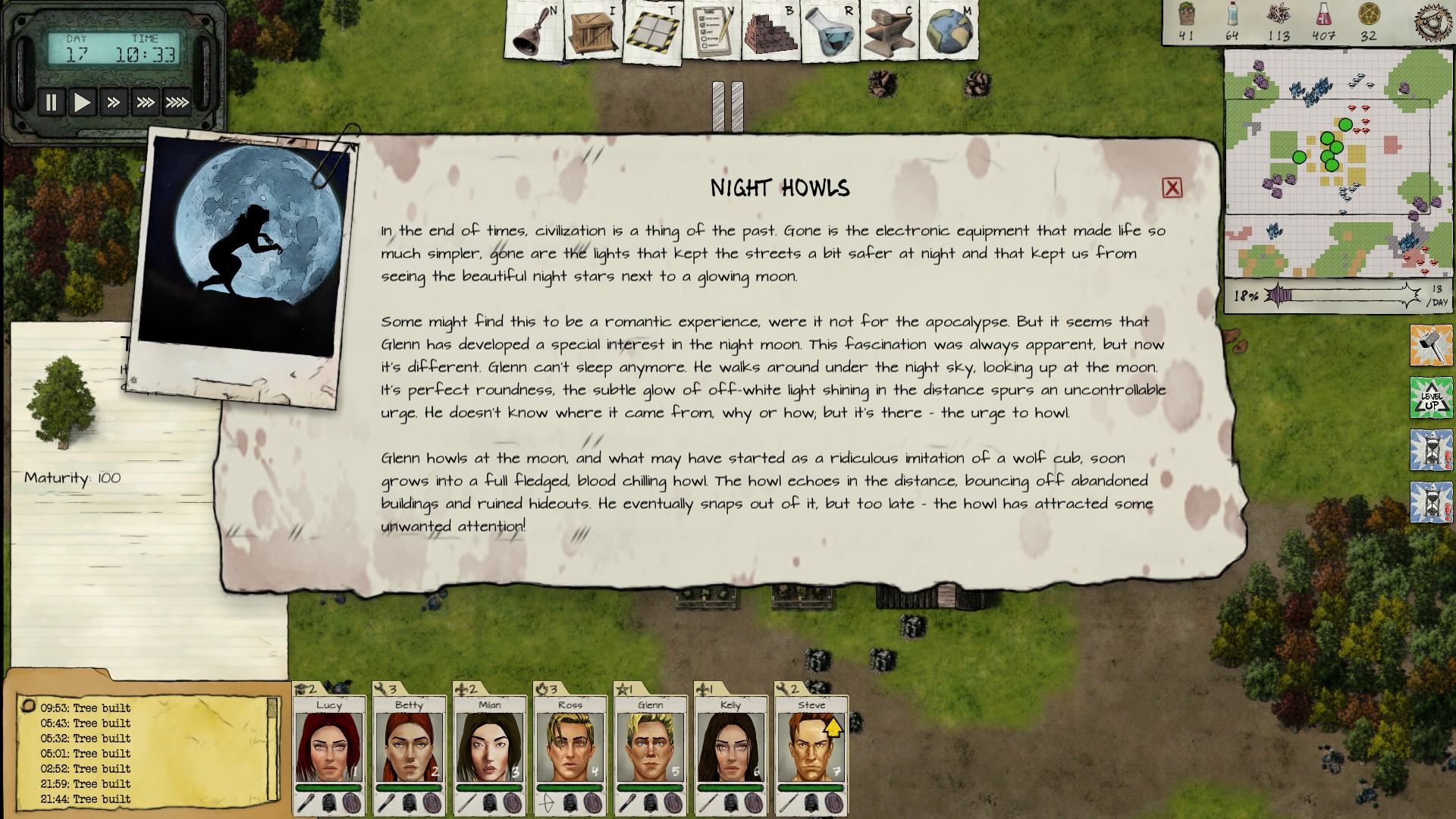 Your camp is rather small and it won’t be long before you venture out into the surrounding countryside using the world map. This covers a very large area and multiple biomes, but ultimately is a series of icons representing different scavenging opportunities. Each icon shows you the expected demon presence at the location, as well as the resources you will find there. Travel is quite slow, and anyone you take away from your base is not doing useful work there. Some special icons provide other mission types — rescuing a survivor or removing a scouting party, for example — but ultimately they all show the same information and lead to the same thing: combat. 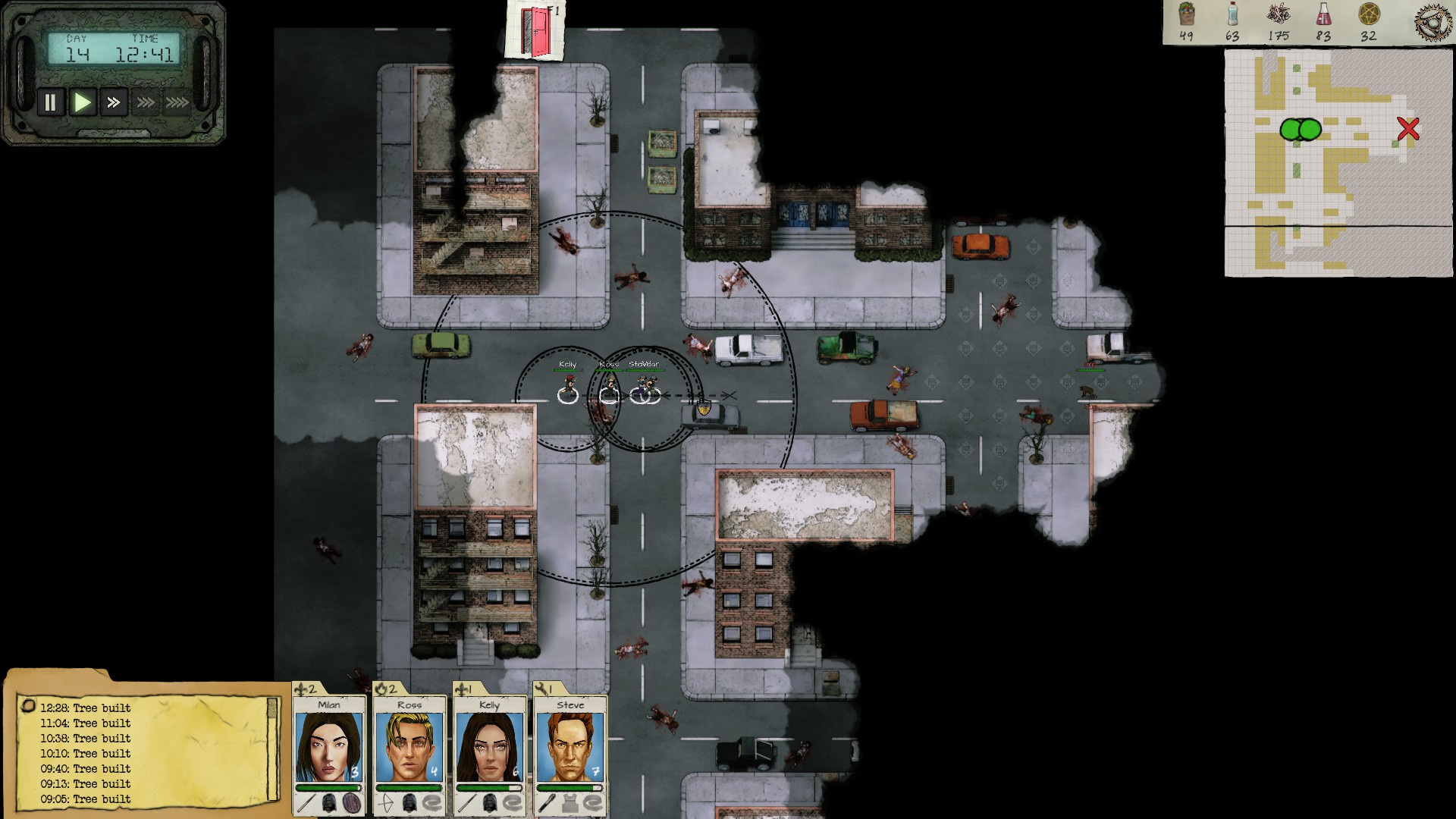 Combat returns to the angled-top-down presentation used in the base-building section, though here all of your interface options are replaced with available combat actions and abilities. Combat is real-time and too fast for my liking, leaving me frequently using the tactical pause. Left click selects and right click takes an action — move or attack. Ranged weapons dominate, so trying to tank even early-to-mid-level demons ends up with your melee fighters dying quickly. To make it worse, each character can only equip one weapon, one armour object, and one item, no matter how large. It’s very limiting and relatively illogical. Ultimately I think a much more tactical turn-based system would have suited the game far better, but it is what it is. 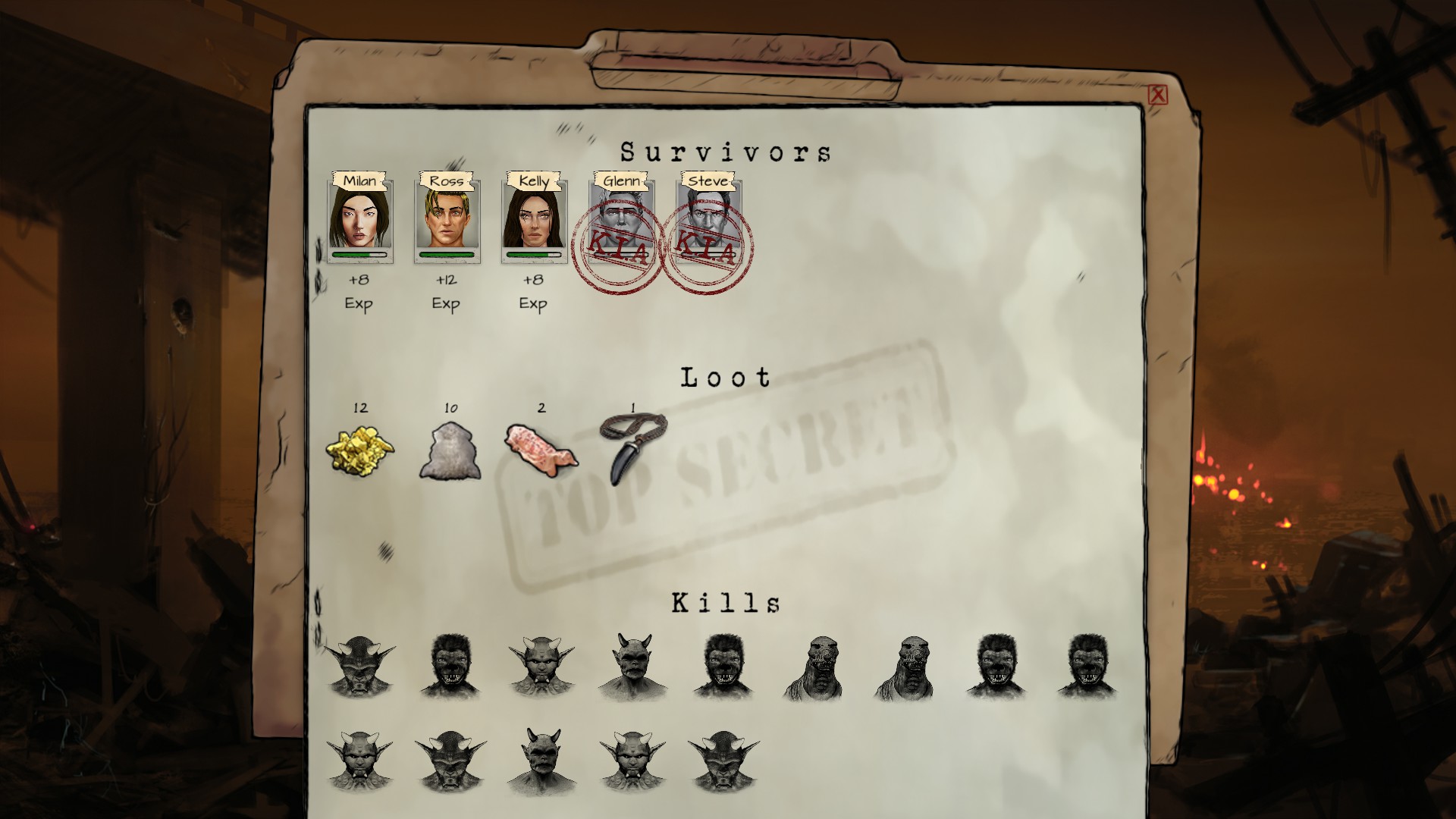 AI is simple and a bit buggy. Combatants charge and attack the first target they see, usually ignoring any better targets that present themselves, and sometimes ignoring an adjacent enemy entirely and simply taking hits until they die. Pathfinding is unreliable, both in and out of combat. The priority system in colony sim mode is even worse, sometimes leaving colonists idle with jobs available or assigning the wrong colonist to a task in spite of priorities. You can override these assignments manually, but the game already has enough micromanagement without the extra problems this brings. 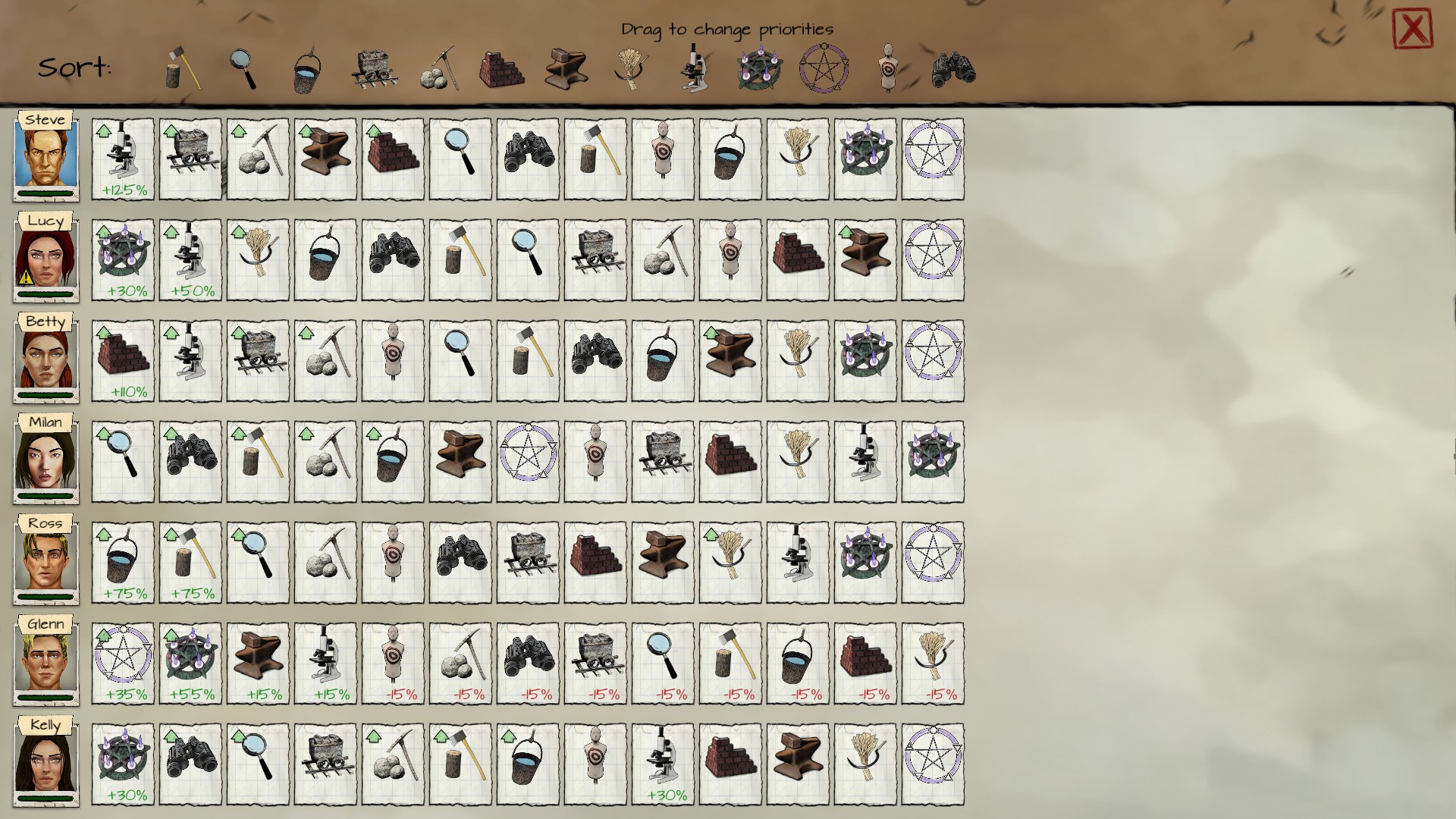 The difficulty curve is a bit weird, too: more like a ladder. The first few encounters are easy, but even early on the game takes some large difficulty leaps and you’ll quickly find yourself outclassed — with nowhere to escape to if it’s a base attack — if you don’t direct your research and construction just so. Random events can make or break your colony, especially early on, which is a bit rough given the difficulty jumps, even if you keep your demon awareness meter as low as possible. Trading prices are completely skewed, with buying costing so much more than selling that neither seems that beneficial, and rescued survivors teleport back to base immediately, but the rescuers have to trek cross country to return, which makes no sense. 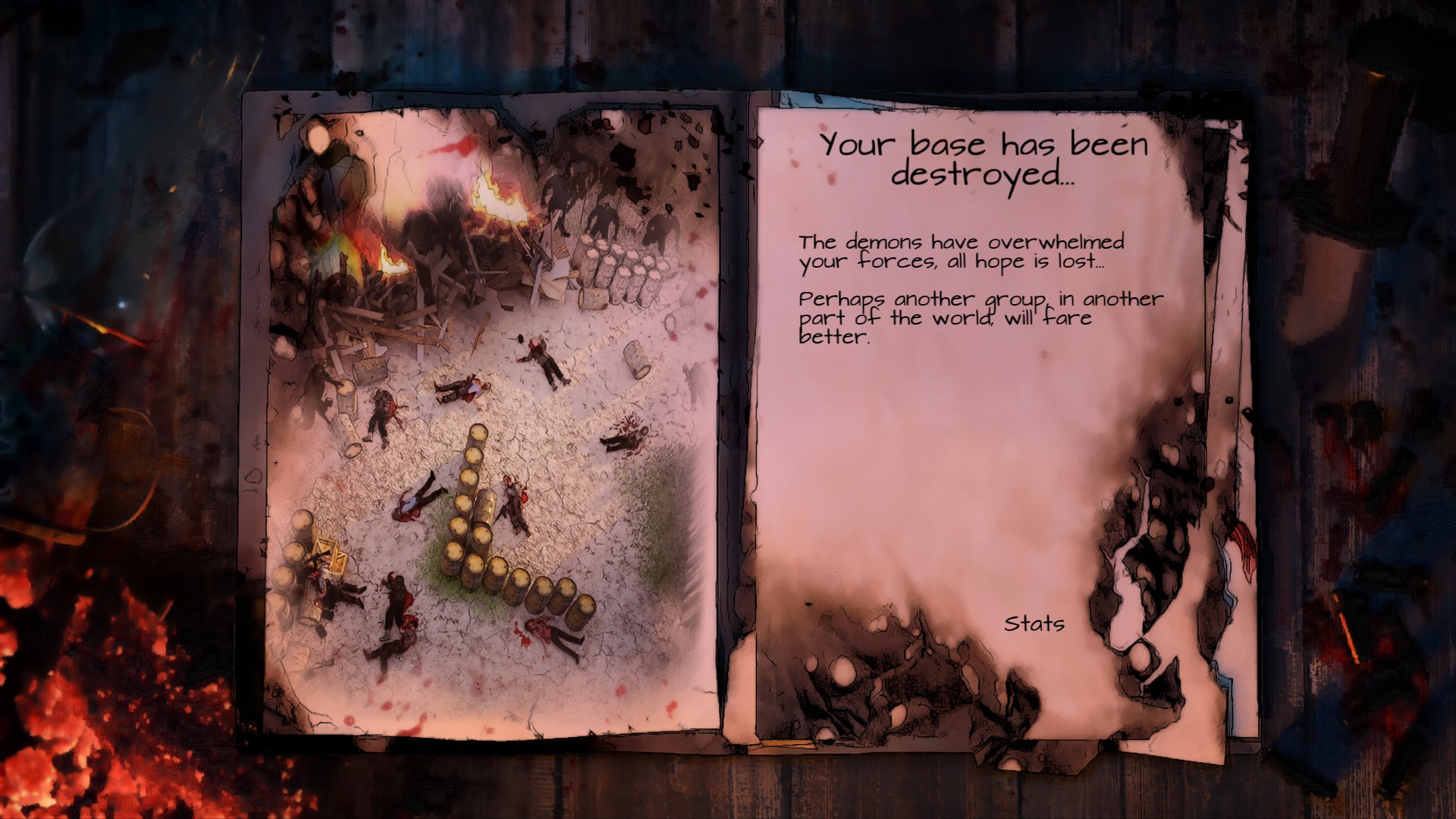 Judgment is a strange one. It’s a bit like RimWorld, albeit in a completely different setting and without that game’s depth, but it has a similar sort of appeal. I’d like it a whole lot more if combat were more tactical and turn-based, especially given the difficulty curve. On top of that, the actual colony part seems a bit too simple and requires a bit too much micromanagement, partly due to the unreliable AI.

But it’s an interesting game and is worth a look, warts and all.