Basingstoke is a tongue-in-cheek twin-stick shooter/brawler with a focus on stealth, darkness, and running away.

Basingstoke begins as you enter the Omni Labs building to undergo some sort of testing. You approach the reception desk and are given a visitor’s pass and directions. On your way you meet a friendly gentleman feeding sandwiches to some genetically modified creatures and the game’s basic mechanics are explained to you.

Once you’re ready to move on you make your way to the elevator, which deposits you in an eerie lab. Following the only path, you find yourself inside some sort of chamber, with technicians yelling at you to get out. Some sort of disaster befalls the building, and you exit the room to find fire and rubble everywhere, and people being attacked by zombies!

A large part of Basingstoke‘s appeal is its cute graphical style. While the game is played from an almost-top-down perspective, the game world and characters are rendered in full 3D. Characters appear to be made of relatively simple low-polygon shapes, which can break apart, with the undead enemies painted with wonderful textures reminiscent of a Day of the Dead celebration. (Whether the models are actually low-poly I’m not sure; some of the graphics are really quite detailed, but that could just be very clever mapping.)

There’s a huge range of equipment, most of which changes your character’s appearance when equipped or used, however, it can be hard to tell when a weapon breaks sometimes; I’ve had many deaths from beating on a powerful enemy with a useless piece of broken wood when I thought I still had an intact weapon. A status message informing of weapon breakage would be a welcome addition. 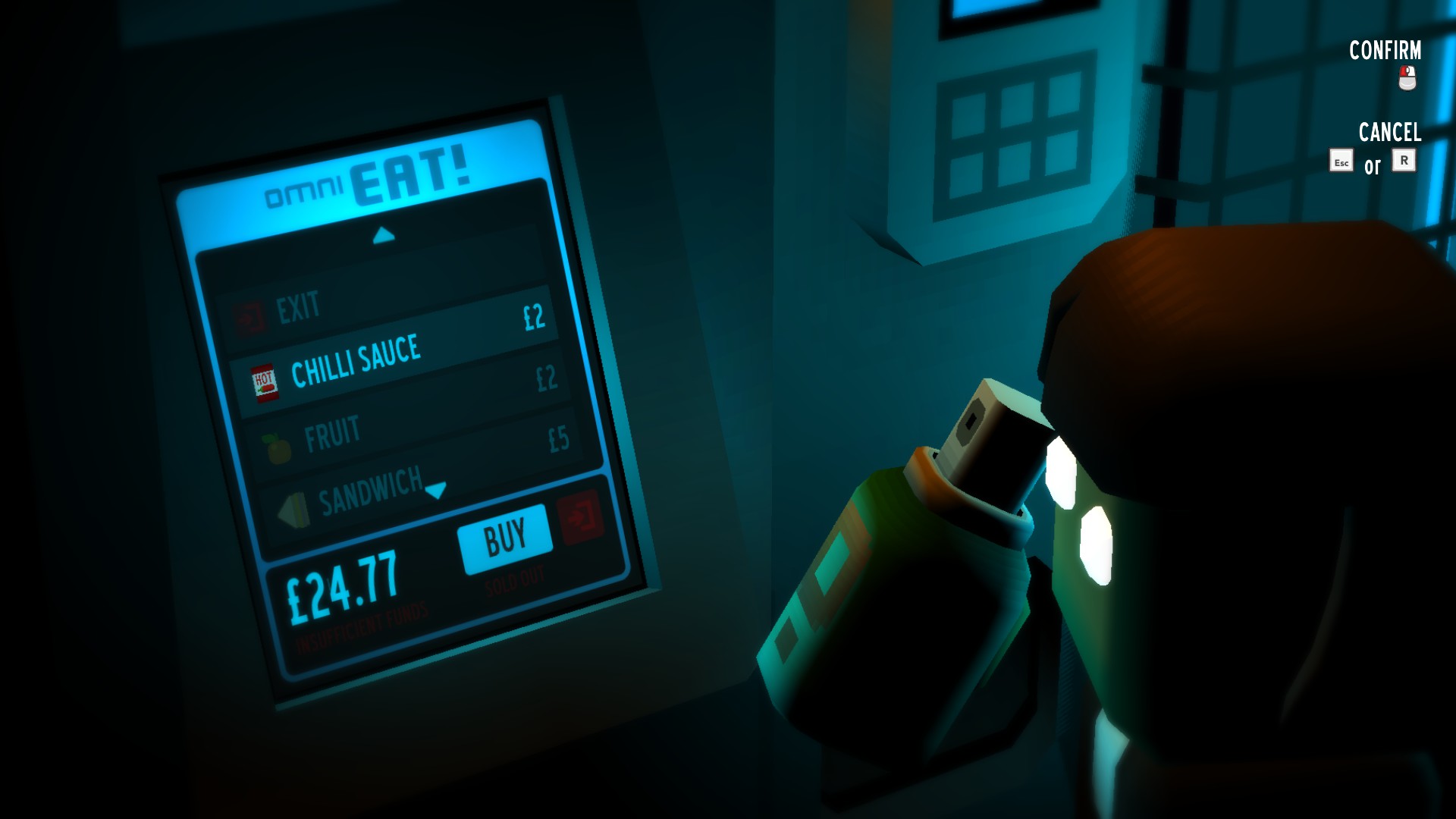 The game is dark, and best played with the lights off. There are static and dynamic light sources scattered throughout each level, but your main source of light is your torch (flashlight), which is bright and harsh, like a modern LED torch should be. Lighting and shadows play a big part in the gameplay, and they look fantastic. Weapon and special effects, too, look very nice, with big explosions, electricity, and little chunks of things going everywhere, especially when your character is killed. 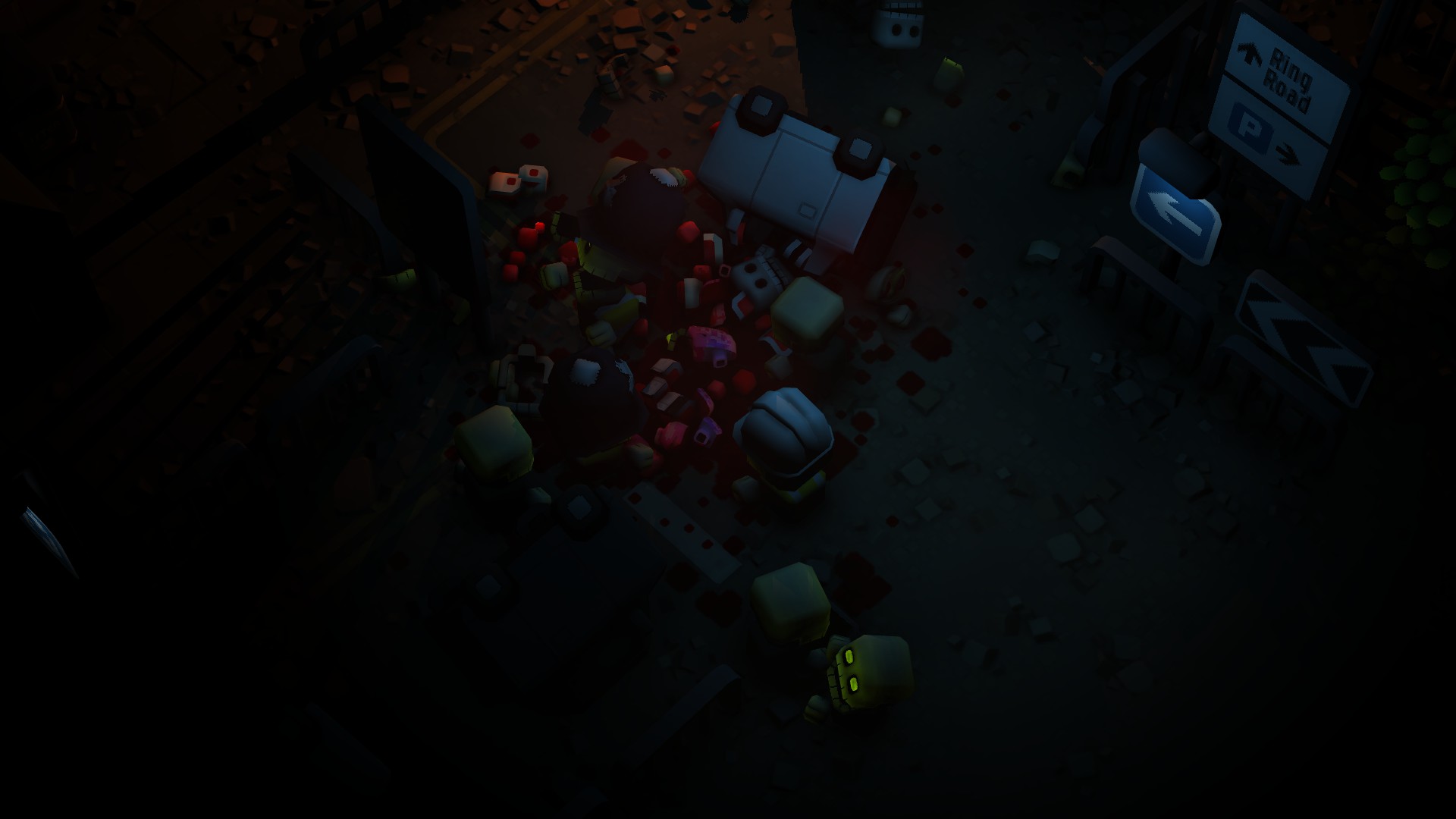 Character deaths deserve a special mention: lovely and gory. A Hunter slashes you, your head goes flying and, while the creature feasts on your still-beating heart and other gooey bits, your decapitated head lands nearby, eyes still blinking slowly. Even better, the game features a death camera, which replays the action leading up to your death and allows you to save it as a video file. Oh joy! 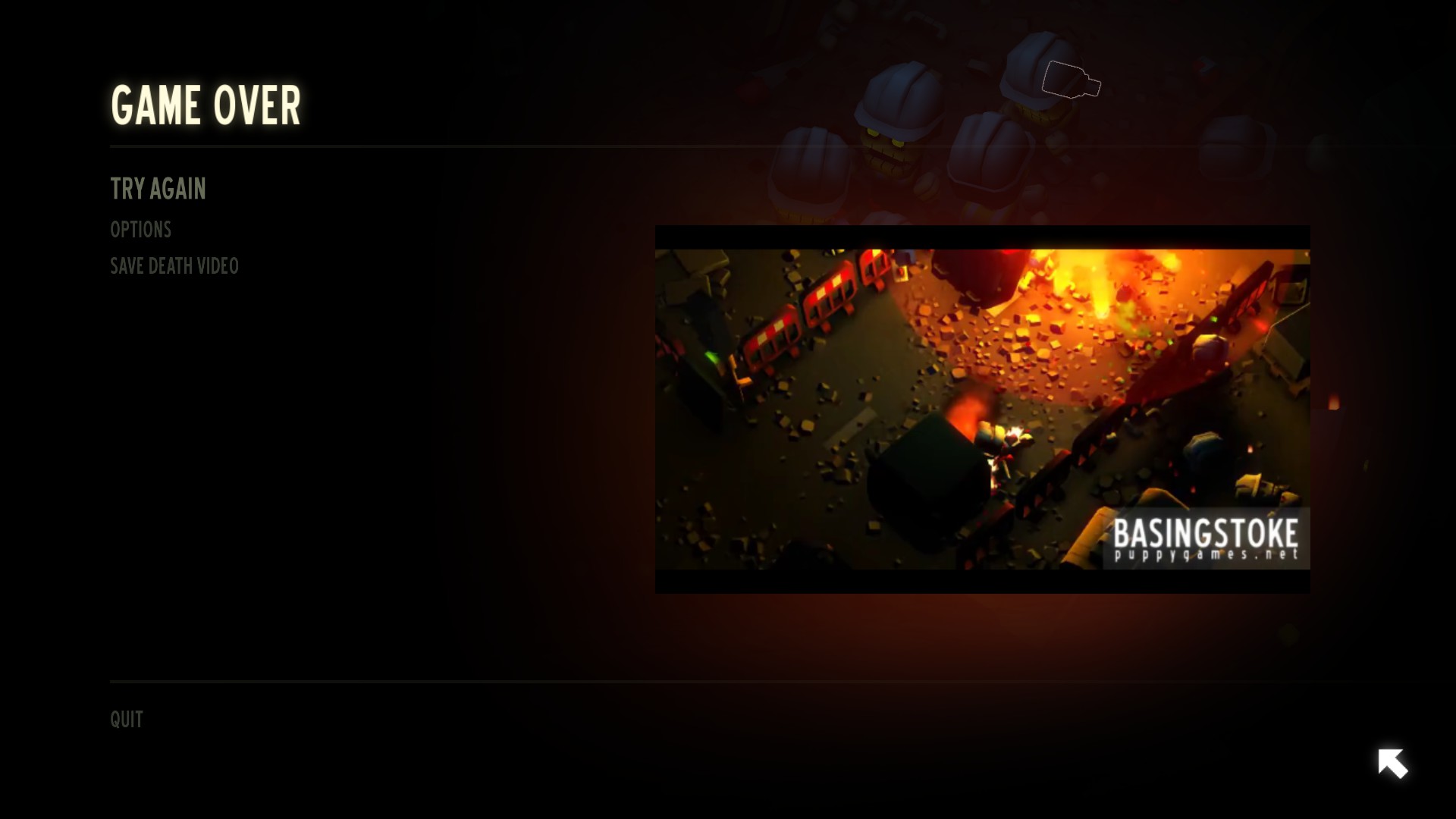 The interface is minimal, but very easy to use. One major thing missing is a list of recipes for crafting items — unlocked as you create them — as at the moment you have to note them down yourself outside the game when you discover them. As well as that, the encyclopaedia is a single list sorted in alphabetical order, whereas a by-category grouping would be more useful: enemies, weapons, and other items, for example. Grammar is mostly excellent, but I’ve noticed a few typos.

Sound effects are fitting for the title, with groans and moans of undead interspersed with grunts and roars of the less human-like enemies; after a couple of plays you’ll learn to recognise different enemy types by their distinctive noises. Weapon effects are good, too. There’s no speech, but your character utters some appreciative sounds sometimes. There’s a spooky sort-of rock title theme that fits the game well.

On the surface, Basingstoke plays like most other twin-stick shooters with rogue-like elements: left hand to move and right hand to aim and fire, some procedural generation, perma-death, RNG dependence, and lots of loot drops. For the most part, controls are tight, though as usual for the genre I much prefer the aiming accuracy of mouse and keyboard to the somewhat floaty controller support.

Unlike most games in the genre, though, you start Basingstoke as a normal person with no equipment or abilities at all, beyond your trusty torch. You have no way of dealing with the sudden outbreak of vicious creatures other than to run. As you run away, though, you find dead bodies to loot and other items of interest, and you build up an arsenal of sorts: pool cues, shovels, nailguns, hairspray, … . You can also craft these items into other devices, of which there are many. 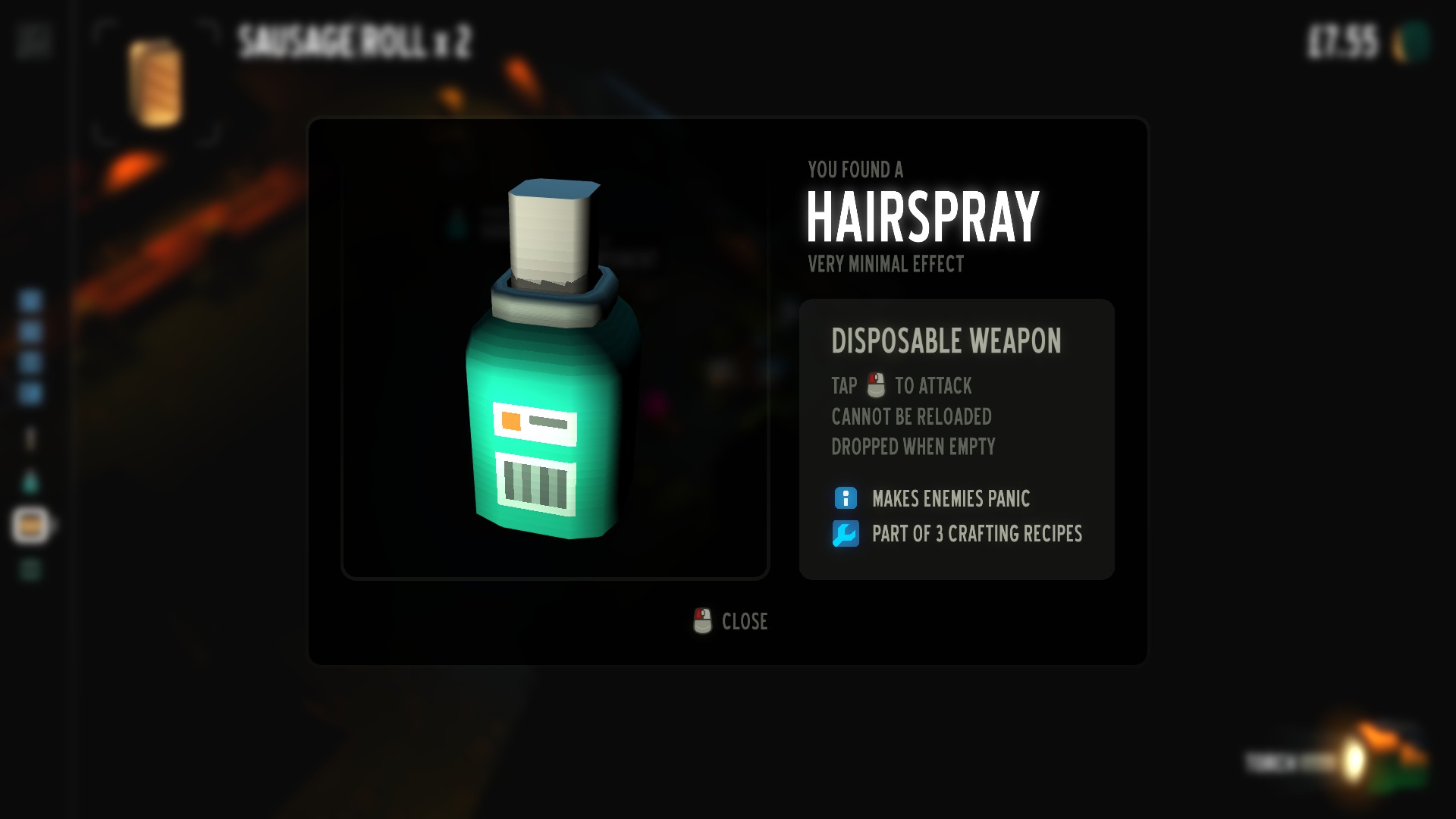 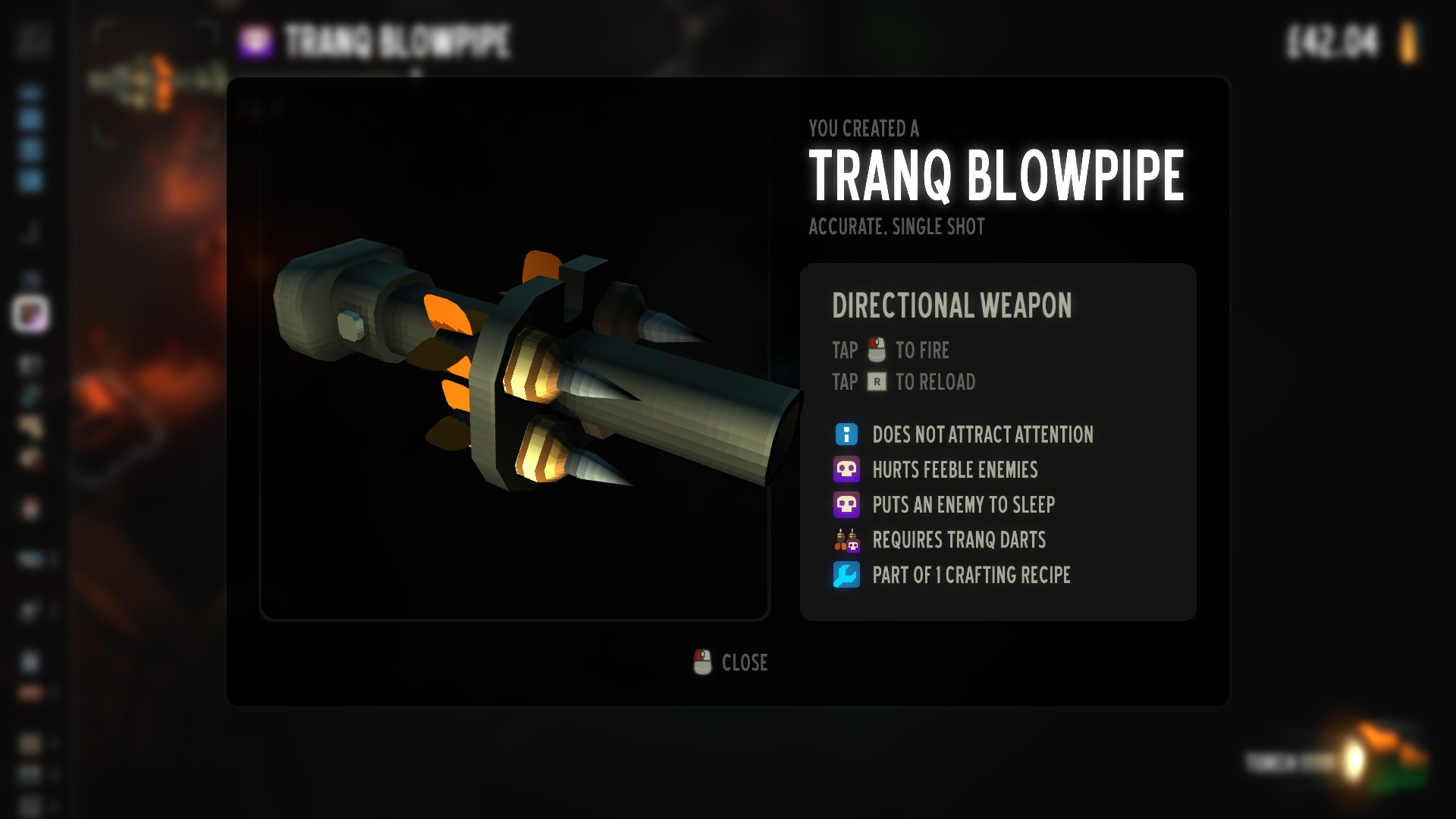 You spend a lot of the game sneaking around in the dark. Most enemies kill you in one hit and your items don’t last long; they’ll randomly break at the worst possible times. This is both exhilarating and frustrating; I’ve alternately raged like a bear and squealed like a little girl. Turning off your torch and sneaking instead of running makes you much harder to detect, but also decreases your visual range significantly, as well as removing the main source of light in the game. Furthermore, certain items are only lootable once they’ve been illuminated by something, so the stealthy approach isn’t always the best one. 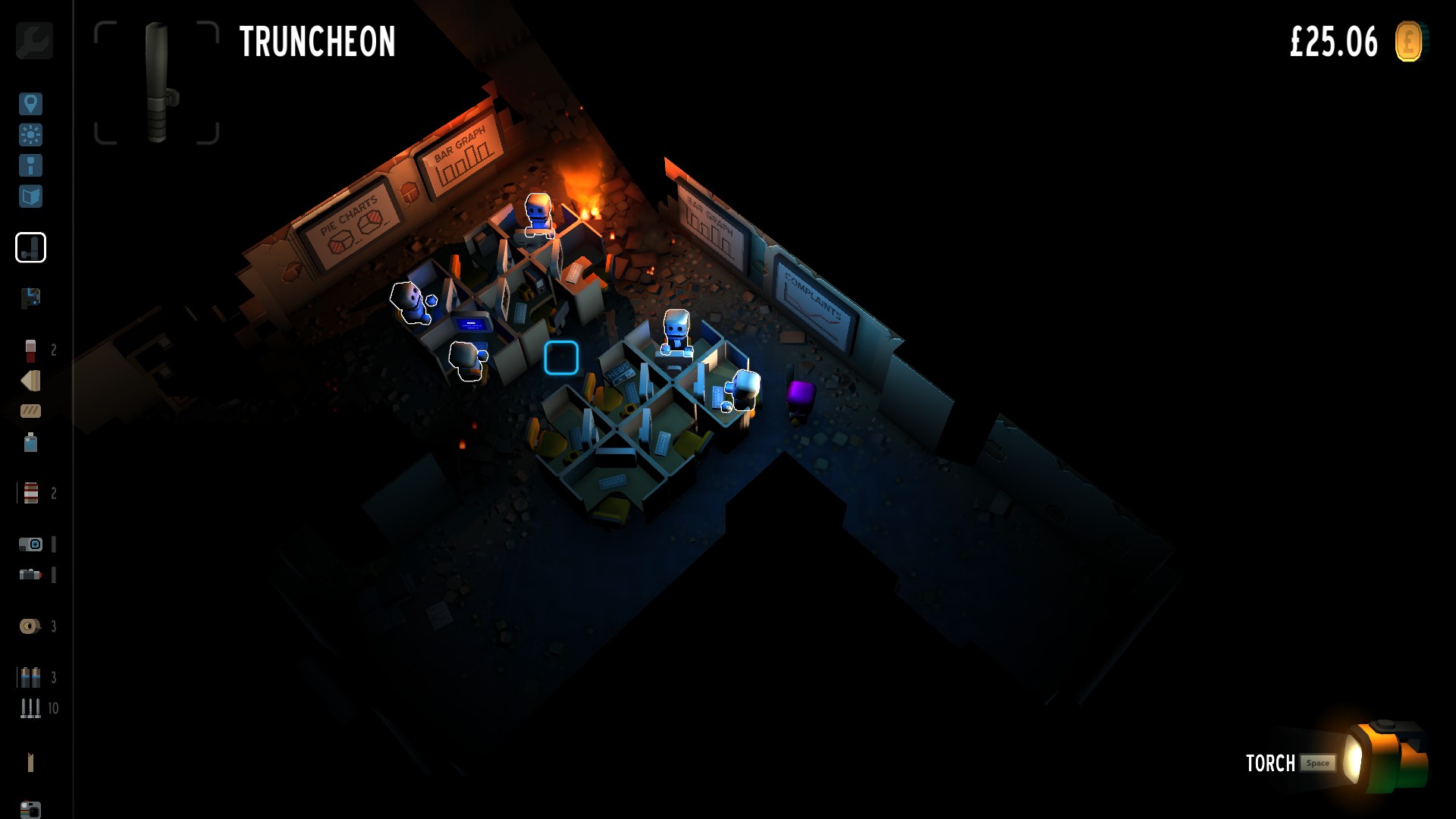 I believe the game features a dozen levels or so (I’m nowhere near through them yet) with each game providing some procedural generation, though much of each level is made up of certain set pieces, of which there are usually only a few choices. A certain level thus always ends up feeling very similar to the last time you played it, even though loot, enemies, and layout may be slightly different. 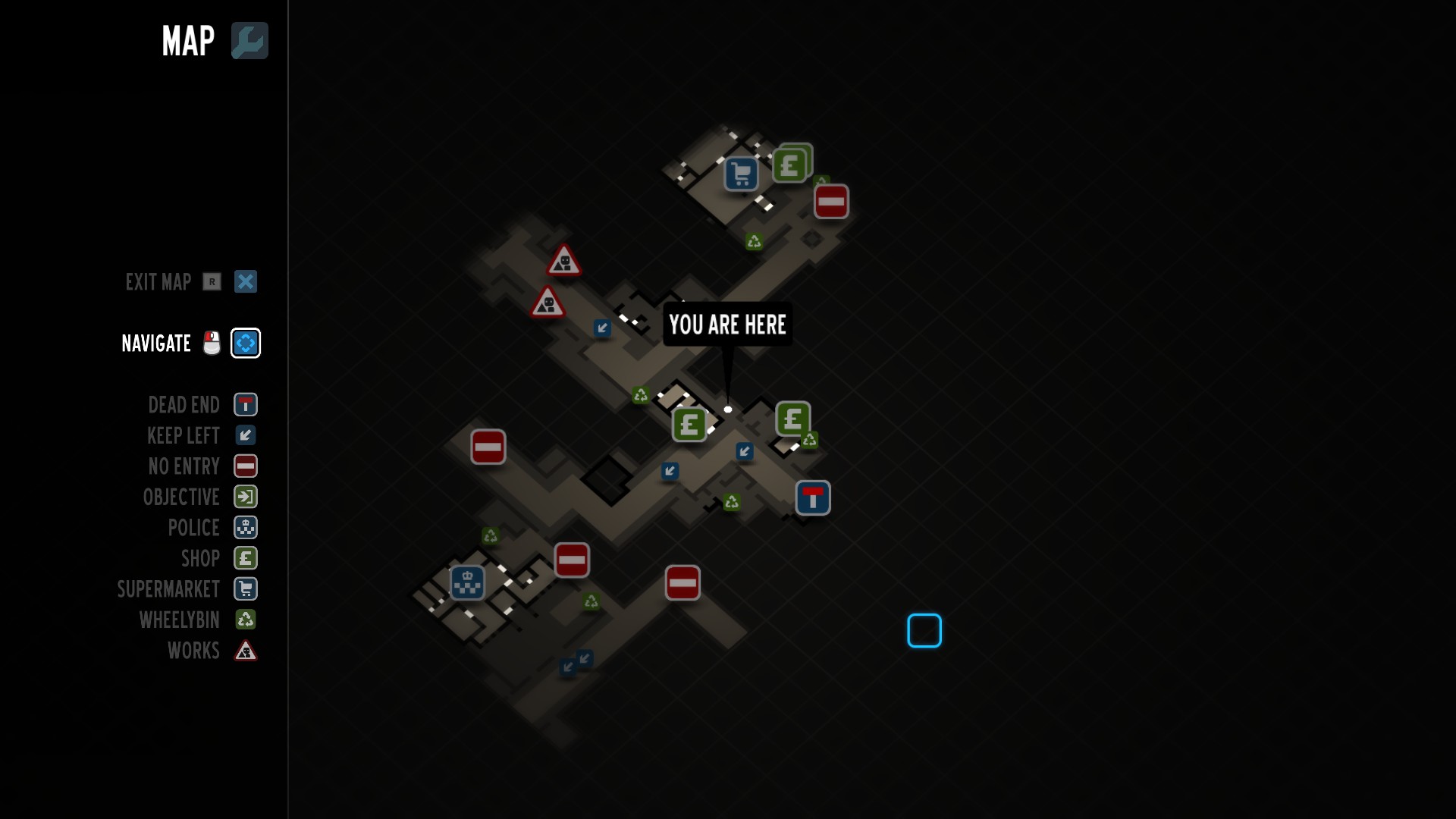 At the start of each level is a camp site where you automatically stash everything you’re carrying when you finish the previous level. These items are saved on a per-character-type basis — you can unlock extra character types through certain in-game achievements — allowing you to restart from any level with access to all the equipment you managed to salvage previously. Your starting inventory is quite small, though, so often you’ll be able to carry much less stuff when you start a new level than you had before. 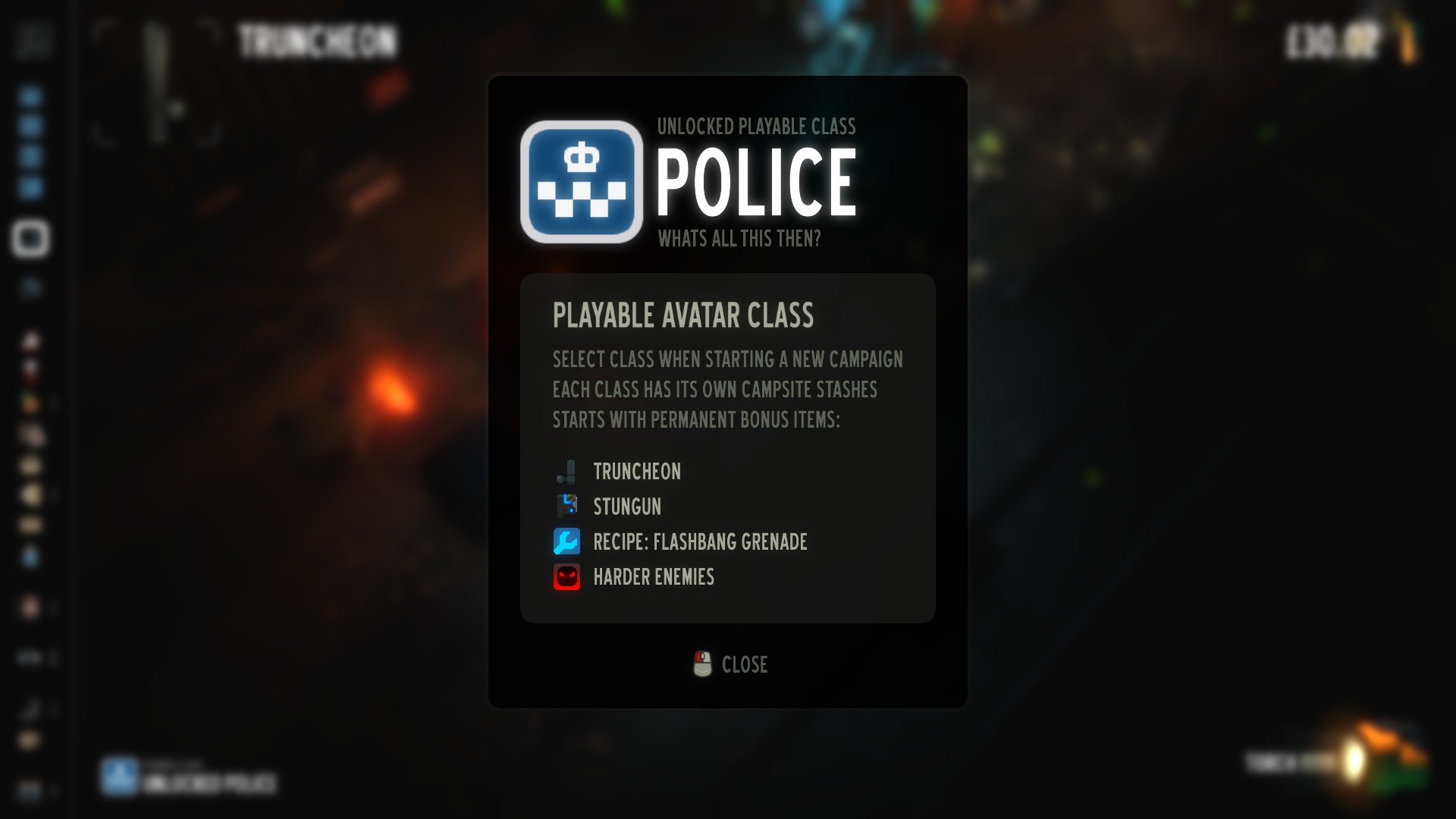 I encountered a few issues. First, the controls are unreliable when you’re trying to hide. The game has big bins in which you can hide to evade enemies, but I’ve died many times while trying to use these. Sometimes the game puts me in the bin, safe and sound. But other times I’ll charge for the bin and slide off to the side, or wait there stupidly walking forwards, while an enemy kills me from behind. It seems to use the same mechanic as jumping — face the object and walk forward — but with the bins, for some reason, it just doesn’t always work. In a game where most enemies do one-hit kills, this is bad.

There are also cases where the UI doesn’t pop up when you die, forcing an alt-tab and Task Manager kill; some counter achievements don’t seem to count properly; my first play with the police officer had TAB not working; and one level had harmless electricity arcing across the map. 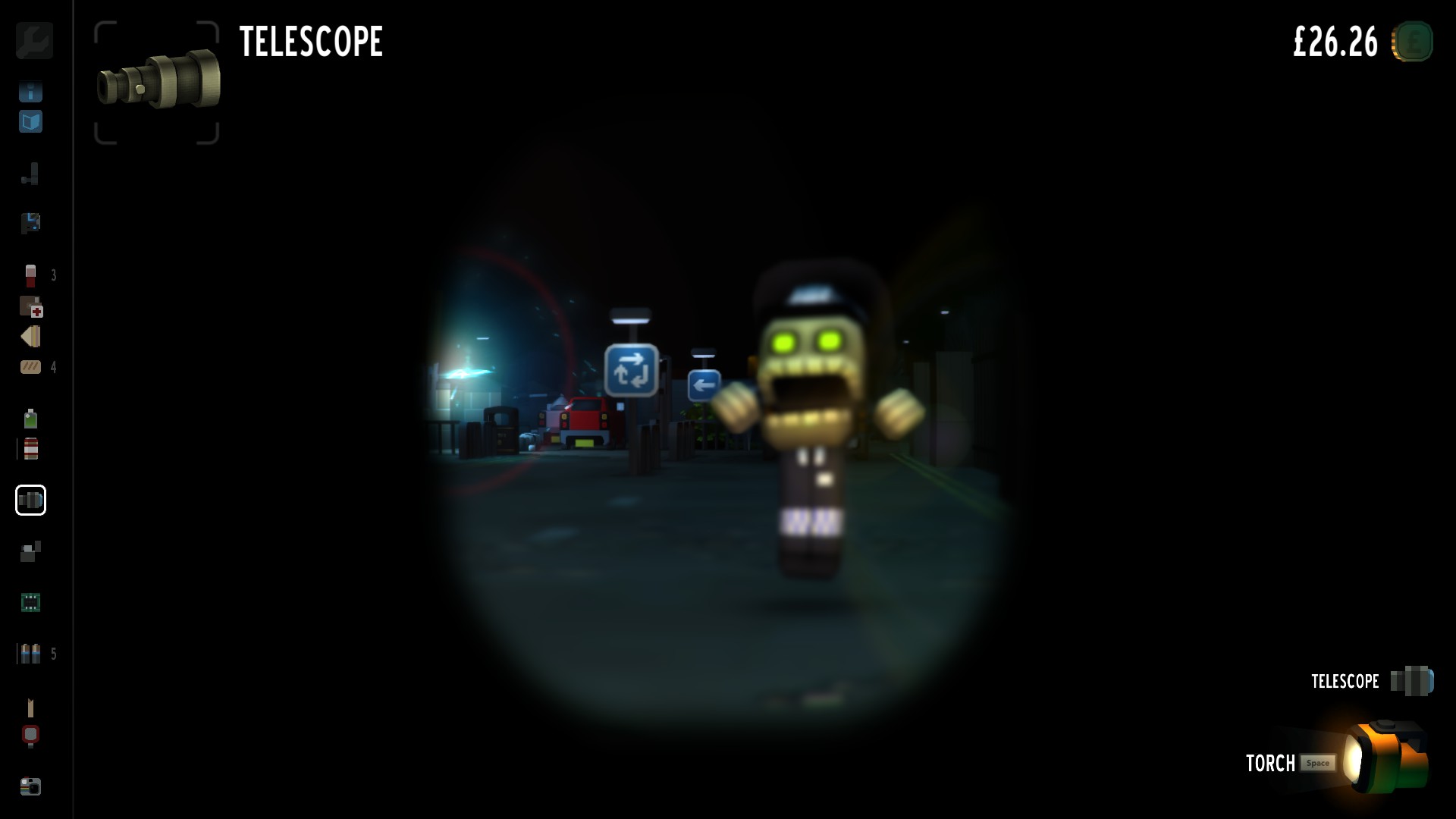 Basingstoke‘s core gameplay is solid and, in spite of the few frustrations, it’s nailed that “just one more go” addictive appeal. There are enough items, weapons, and crazy things to make, as well as fun unlocks and achievements, to keep you interested even once the appeal of the wonderful cutesy zombie graphics has faded a little. It’s a great game, let down a little by a few issues that make it more frustrating than it should be.