Rogue Harvest is a basic roguelike survival game with some good ideas, but also some problems. For the price it’s worth a try.

Rogue Harvest is a hardcore roguelike 2D survival game. You find yourself in a strange and unknown land with no memory of how you got there or even who you are. The only thing you know is that you need to find a way to survive. Armed with only basic tools and a little shed at your disposal, you will need to harvest crops, hunt animals for food, fight monsters, and survive harsh climates. Maybe by surviving long enough you will remember what happened.

General Gameplay
Your main objective is simple: survive against the odds. To do so, you will need to maintain your energy and life. Energy is a statistic representing your general well-being, restored generally by eating food or sleeping during the night. Life is the classic HP bar; if it reaches zero you are dead. There is also a leveling system with pre-set increases to life, energy, and defense. There are no level-up customizations.

Your main activities are fighting, crafting, and gathering. Fighting is described in the next section. Crafting is pretty simple and straightforward: a menu opened with the C key displays all the available items right from the start, along with the resources required to make them. Better swords, tools, armors, traps, doors, walls, furniture, and everything you need to survive is obtainable with crafting, though some items require a crafting bench or oven to be crafted first. There is not a huge variety of items to craft: around 25-30 in total.

Gathering is done as in any other survival game: explore the world and find what you need, be it wood from trees, meat from animals, metal from ore deposits, or more exotic materials from dangerous enemies, such as spider silk. The map is procedurally generated and includes forests (though not very dense), mountains filled with ores, pre-made houses, and of course a lot of monsters and animals, which progressively become more numerous and strong the farther you travel from your starting point. And of course you need specific tools to gather specific materials, such as a pickaxe for stone or metal.

You need to build your very own shelter to survive the nights, as each night a horde of monsters attacks. It is fundamental to get a strong defense up in a few days or you’ll be overwhelmed. Monsters attacking in the night are not found normally in the world, and at later stages are even able to destroy reinforced walls using bombs, a thick layer of defences is important. Building is pretty simple: just select an item from the quick bar, place it on the ground, and you’re done. The special hammer tool can remove unwanted buildings efficiently.

Climate can also be your enemy, as Winter prevents your crops from growing and causes you to freeze if you’re exposed to cold for too long.

As far as I’ve seen, currently there is no true end to this game. Once you’ve built a good fortress, have all the best equipment, and you’ve survived more than 10 nights (which is the highest achievement), you can consider the game finished. The developer confirmed he wants to add an end-game content update, but no date has been set.

Combat System
Combat in Rogue Harvest is basic 2D real-time combat. Left mouse click to use a weapon. There are only swords and the basic axe as melee weapons. Each has different reach and speed and requires care to swing at the right moment without enemies getting close enough to hit you back. With some practice you will get the hang of it. Ranged weapons include a bow and several magic wands with different effects, including summoning temporary allies and transforming enemies into less harmful creatures. All weapons except the basic ones have a durability rating and eventually break, forcing you to craft them again.

Each killed creature drops souls: a material used to craft many weapons and items. Souls can also be gathered from Soul Wells, which you can craft and place in your base.

Content
It may take you some or many tries in order to survive for a long time. The game is all about finding a strategic place to build your base and being efficient. For me, the game lasted three to four hours before I was able to survive 14 days, having all the best gear and a very strong fortress at my disposal.

Balancing
I feel the game is balanced pretty well. There are no overpowered things as far as I’ve seen.

Challenge
It very much depends. Nights without a good base can certainly be very difficult to survive, especially after some days. Combat is quite tough at the start, but gets much easier with proper gear. Overall, considering survival aspects, I’d rate this game a moderate-to-good challenge. 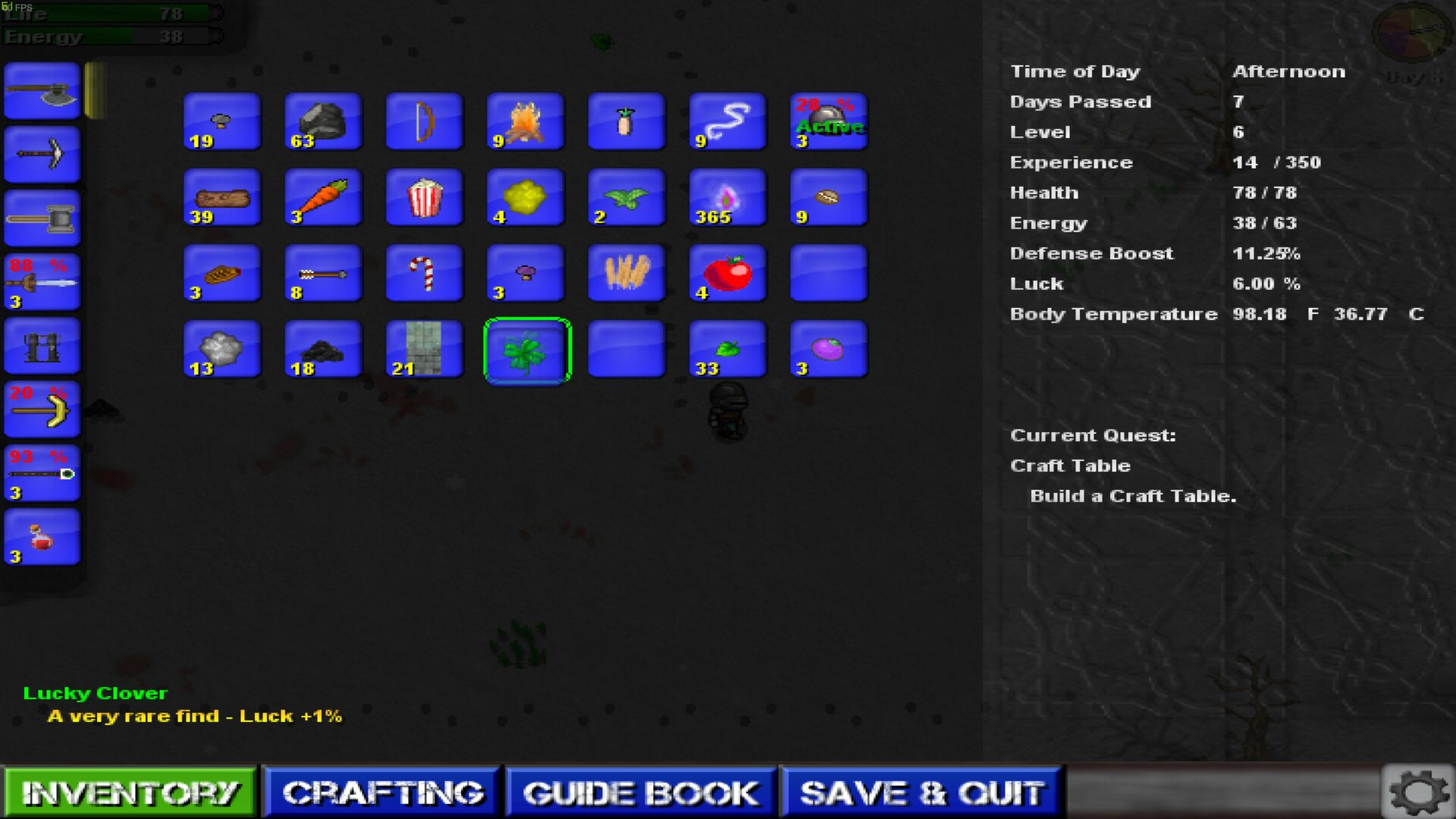 Graphics
Graphics are 2D sprites and tilesets, very basic at that, with no particular pros. Considering the current standard for indie games of this type, I’d define the graphics of this title as sub-par.

Sound
Sounds and music are alright, but there’s nothing impressive or special about them.

Performance
The game has some inexplicable frame-rate drops in some areas. These areas had nothing in common that I could figure out to justify such drops. It happens sometimes and is from about 60 FPS to 40-35 FPS. This is quite a major issue, but not critical.

Quality of Life
Some good things have been done for quality of life, such as stacking of armor or swords of the same type in order to immediately change one with another when the first one breaks. But there are other elements that aren’t so good, such as collected items going to the quick bar or some items not stacking together, such as flowers. Chests are very small compared to the amount of stuff you find. There are no forms of auto sorting or stack-splitting directly, unless using chests as a medium to split stacks by depositing and then getting part of the stack back again. Overall, quality of life is so-so.

Bugs / Issues
Doors and gate doors put in certain positions display the open-close animation continuously. Enemies may spawn inside blocks especially in mountain areas and stay stuck for a long time. Sometimes items disappear when transferred from chests to inventory with no reason, though this is rare. 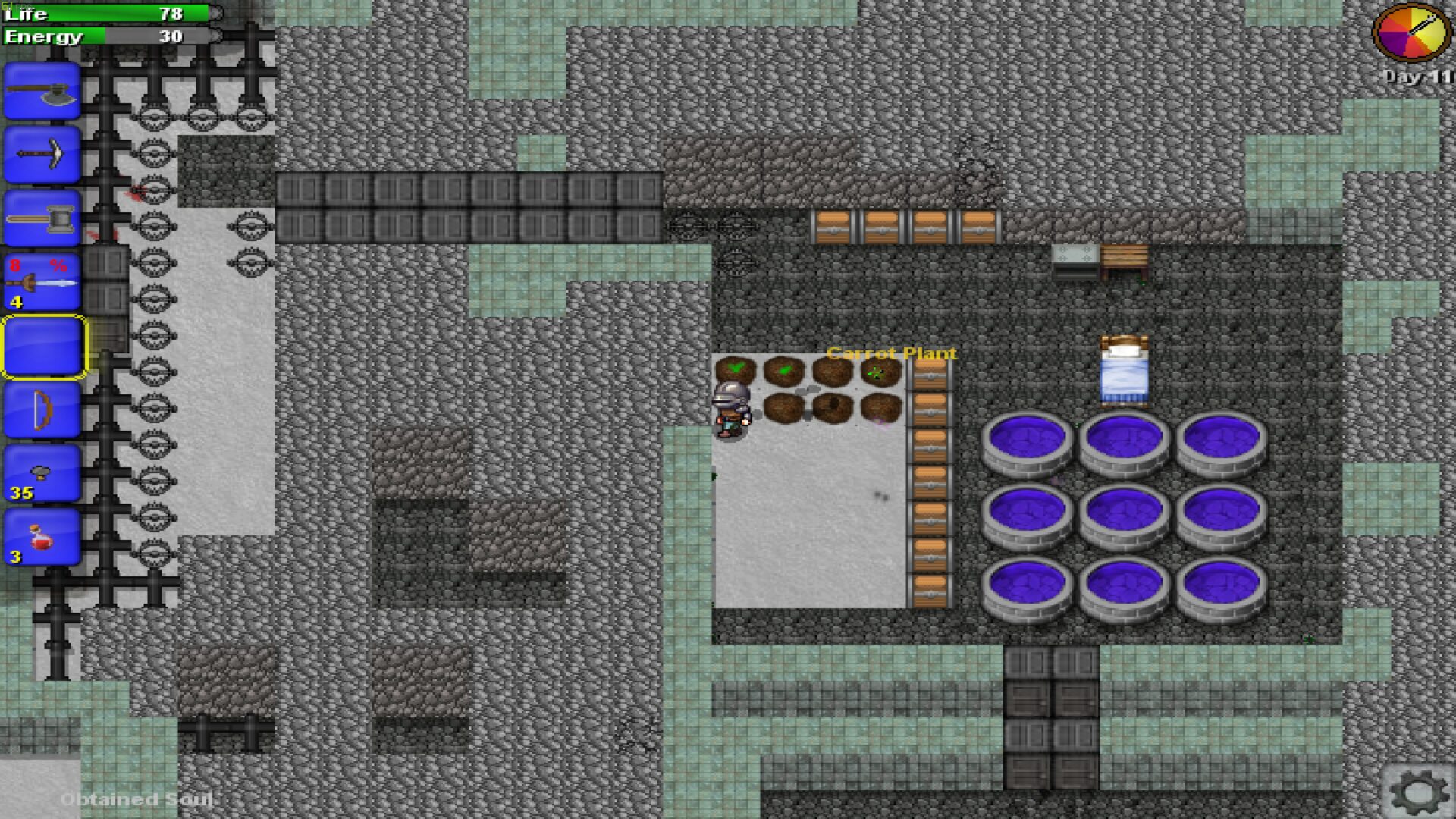 Rogue Harvest is a very basic survival roguelike game with some good ideas and is decently made overall. It is not an outstanding work, and not even a great work, but it does the job. For the price proposed it is a decent product.