Steampunk Tower 2 is a good alternative take on the tower defense genre that mixes various gameplay styles in a successful way. It will surprise you with simple but also deep mechanics and a pleasant style.

Steampunk Tower 2 is a strategy / tower defense game hybrid with some twists to the formula. In an alternative, mid-800esque steampunk European continent, a great war is raging between the forces of the Cult and the other free nations.  Unfortunately, it is not going well for the latter. The Cult, using technological superiority and military might, has subdued most of the Free Nations and its total dominance is imminent. Not everything is lost though, as there is still someone fighting: Lord Bertram Bingham, a powerful noble, is on a quest to gather the best scientists, soldiers and tacticians of the Free Nations to mount a counter-offensive against the Cult, using as a trump card the powerful Steampunk Tower, a technologically advanced battlestation which is deployable anywhere in brief times. And so, the war against the Cult begins again.

General Gameplay
The gameplay of Steampunk Tower 2 is an hybrid between a strategic management game and a tower defense.

The core of your operations will be the secret base, located in Spain. You will have to supervise it, upgrade it with new structures and facilities, and also manage the resources (money and Etherium) used in the construction of pretty much anything. From it, you will be able to send agents to cities all over Europe in order to perform missions that will get you Etherium, a rare and expensive material that fuels the Steampunk Technology you use against the Cult. In addition to that, you will also be able to build and upgrade turrets to mount in the Tower, develop new research plans for each individual turret, and work on upgrading them to be more specialized and effective.

To decide what missions to undertake, you have the world map which encompasses all of Europe and part of Russia. It will be filled with different missions to undertake. Firstly there are the Red Missions which will be the main story, essential to progress and gaining new blueprints along with experience and resources. Yellow Missions will be secondary incursions, you can complete them for additional rewards to boost your research and funds, such as money, Eteherium and Details. Details are pieces of machinery recovered on the battlefield and are used to upgrade turrets and the Tower itself at the secret base. Each Detail can be of a different quality and specialization, meaning some Details have better value on specific turrets than others.

Last, but not least, we have Blue Missions, also called Challenges. These are difficult special missions where you will have a predetermined set of equipment and special battle conditions, if you manage to survive these hard tasks, you will be rewarded with unique, powerful turrets that you cannot find anywhere else, and always have unique upgrade trees and powers. 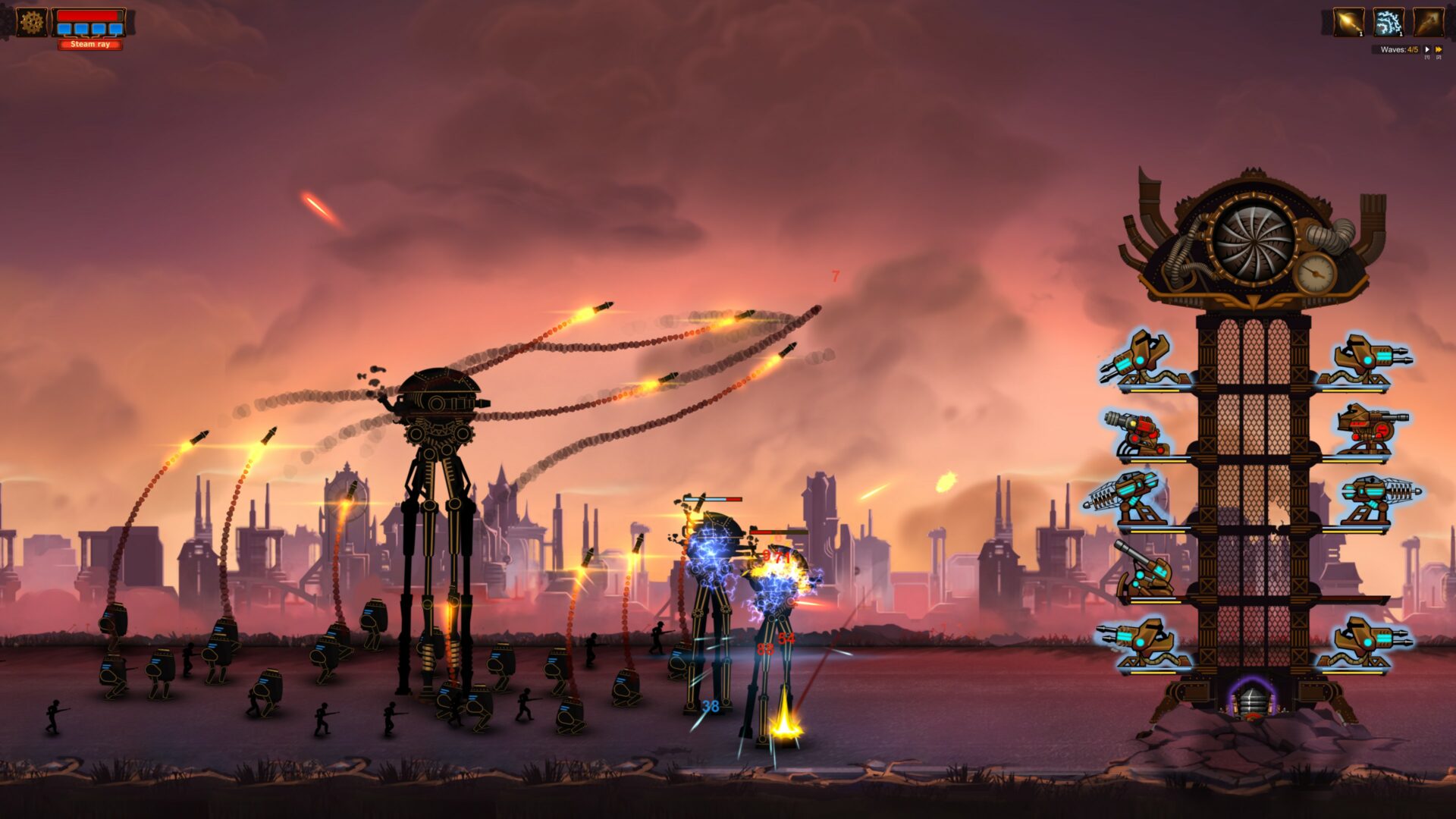 Factories also play a crucial role in the world map, as they produce components used to evolve turrets to the next level of power (There are four levels of power for each turret, each of them branching into two sub-classes of turret, specialized in different tasks), but since factories are under Cult control you will have to free them again with battles.

The Cult will not surrender easily, and it will always attack territories you conquered again. When this happens you will have to defend and conquer those territories or factories once more. Luckily, you can use the Auto-Battle function, that will determine automatically how much damage your Tower will suffer based on your equipment, and so allow you to skip the battle and see the results immediately, but only if the territory in question has already been liberated once!

Everything happens on the world map at a specific time, so things such as sending agents off or requesting components from factories will take time to arrive at the base, using trains and other means of transport. Waiting for these things can be a bit tedious sometimes, but they never take very long to happen. 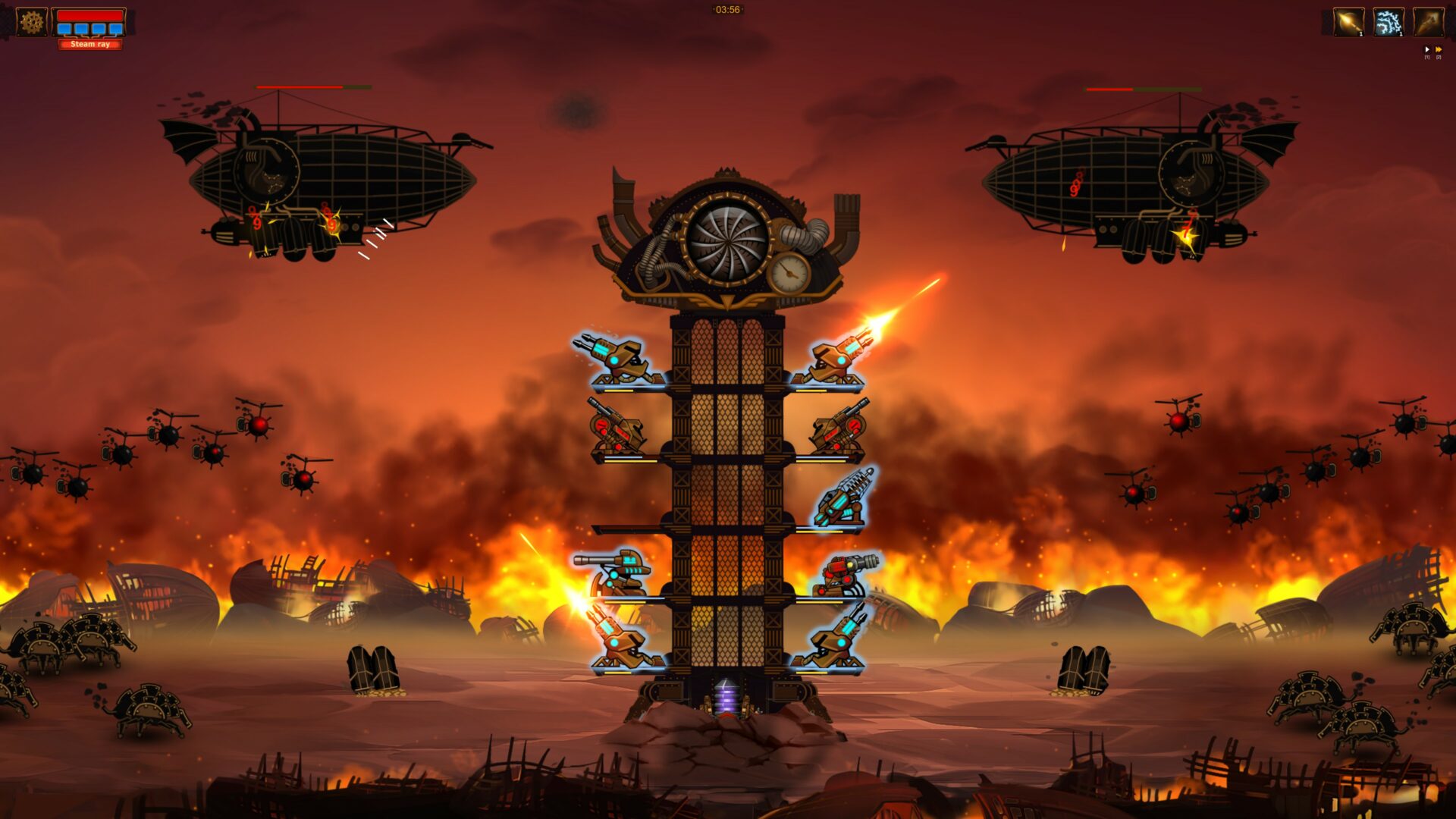 Combat System
Once the Tower gets deployed from the Aurora Carrier, the battle begins. Before the battle you will be able to choose the disposition and type of your turrets mounted on the Tower. Initially you will have four, then with upgrades you will end up with ten turrets together, five each side. Also, you will be able to choose eventual field upgrades and super weapons you may want to use in battle.  These have big advantages like clearing waves instantly or dealing huge amounts of damage, yet are also very expensive.

Once the battle begins, the enemy will often attack from both sides of the Tower. Turrets will fire automatically at the enemy, though they will need to reload ammo once in a while, and that is done either automatically (but very slowly) or manually, by using your mouse to move a turret in the central section of the Tower where it will be disabled for reloading. Moving towers at the right moment to reload and provide a constant amount of fire to destroy enemies is one of the most important game mechanics and takes practice to get used to.

There are many types of enemies, with some resistant or weak and many others with different types of damage. There are many types of turrets as well: cannons, machine-guns, flamethrowers, rockets, lightning guns, etc. Understanding each enemy type’s weaknesses is the key to victory. turrets can load steam power inside them by destroying enemies, and when full, they can unleash a powerful super shot, different for each turret type and generally very powerful. A super shot fired on enemies weak to that damage type will score a critical hit and deal huge damage.

In the later parts of the game, enemies capable of disabling turrets and damaging the Tower from great distances will appear.

On some occasions you will face powerful boss units, that will require good strategy and an understanding of their weaknesses to be defeated.

Generally, I find that the combat system is much more engaging and dynamic here than in your average tower defense game, and this really helps fighting the feeling of combat staleness that has crippled this genre over time. 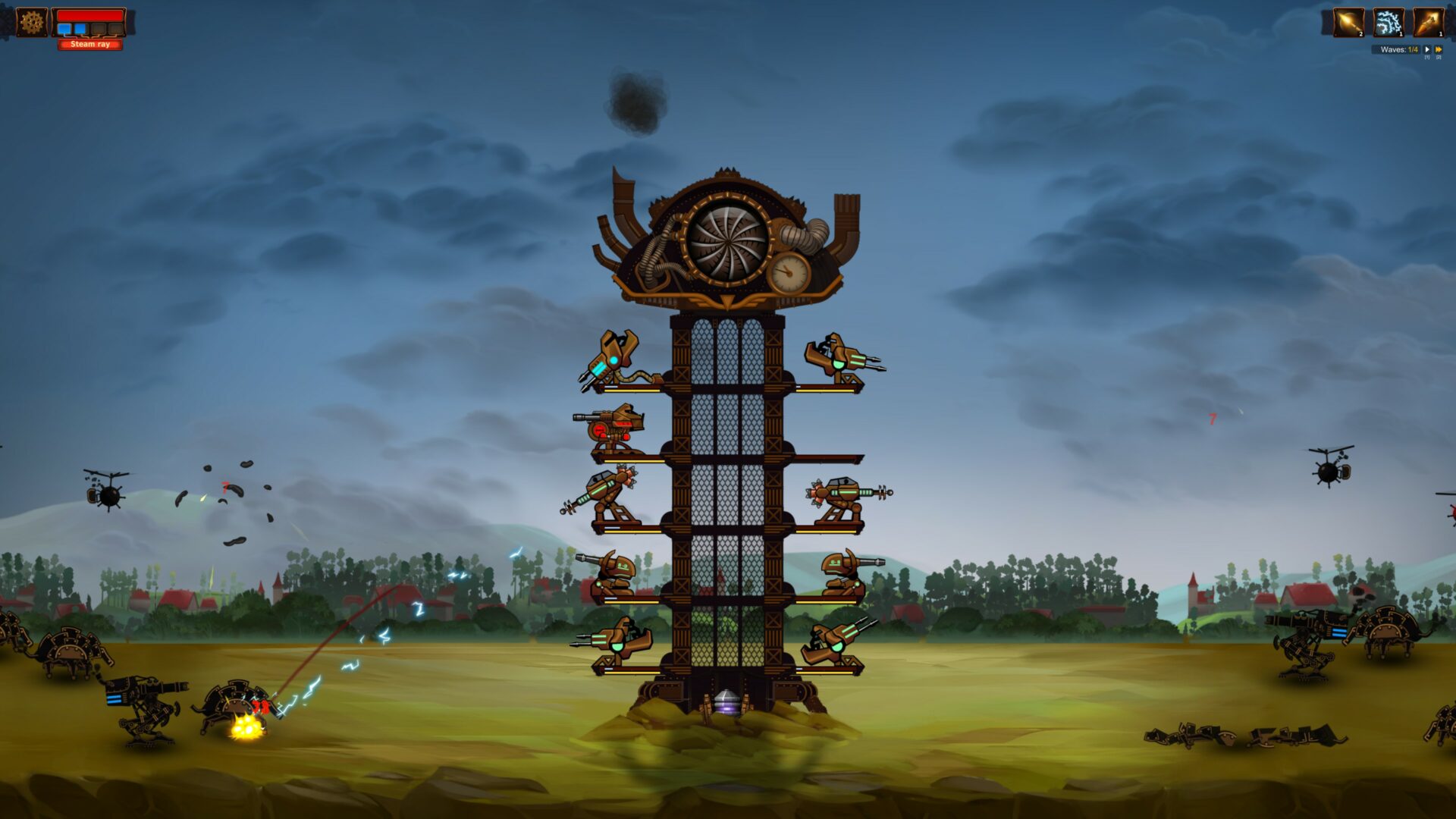 Content/Balancing/Challenge
The game is decently long, it takes about 15-20 hours to finish everything. Overall, enemies and towers are decently balanced and I found no particular problems. Late in the game, parts of some maps and challenges can be pretty tough. Overall, the game offers a good amount of challenge.

Graphics/Sound
Overall, a pleasant 2D graphical style which generally appears very polished and well made, too bad the character portraits in the story dialogue appear to be low-resolution and not at the same quality standards.   I found the game has a good soundtrack and decent sound effects overall.

Performance/Stability/Quality of Life
Nothing of any note occurred as for as performance or stability is concerned.

Bugs / Issues
There currently is an issue with a main quest that will force the player to leave the game open for many hours in order to capture certain territories a second time and complete the quest. Aside from this, no other.

Steampunk Tower 2 is an alternative take on tower defense genre that surprised me in a good way. It has fresh mechanics and fun gameplay, for the price it is listed at, it’s quite a bargain.