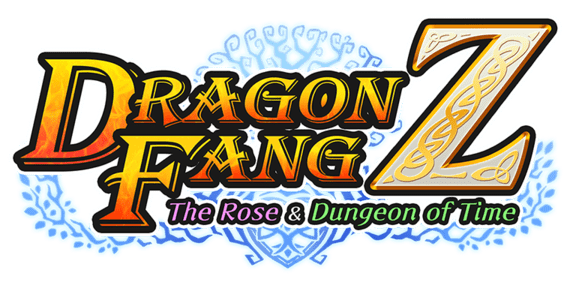 Rose is a half-human, half-dragon who, along with her fairy godmother, stumbles into another dimension, known as “The Tree of Time”.

It is said that a great treasure of formidable power sleeps in the deepest depths of this dimension, a treasure with enough power to return a lost dragon-half and her fairy to their own world. Thus begins our heroine’s journey through the labyrinth known as “The Tree of Time”.

If Rose is defeated during the adventure, she will lose all items and her level will be reset. Furthermore, the dungeon of The Tree of Time changes its form every time you enter, meaning no two quests are ever the same. Your courage and growth as an adventurer will be the keys to this quest!

From the scant information I have gleaned from the internet, DragonFangZ is the third installment of the series. The two previous games came out on mobile and the Nintendo 3DS console as Japanese-only releases. The games are basically carbon copies of the renown Mystery Dungeon style roguelikes created by the Legendary Chunsoft. These take the DNA from classic roguelikes and adapt them to the console. For purests they are considered lightweight fodder, but for me, they distill the essence of the gameplay into a hugely enjoyable and addictive cocktail, free from the obtuse baggage that the old ascii archaic titles possessed.

To further pigeonhole this title. The gameplay systems lift heavily from perhaps the best roguelike ever created in my humble opinion; Namely Shiren the Wanderer. This is not a bad thing. Any game that uses these features is going to have an outstanding foundation on which to build on. 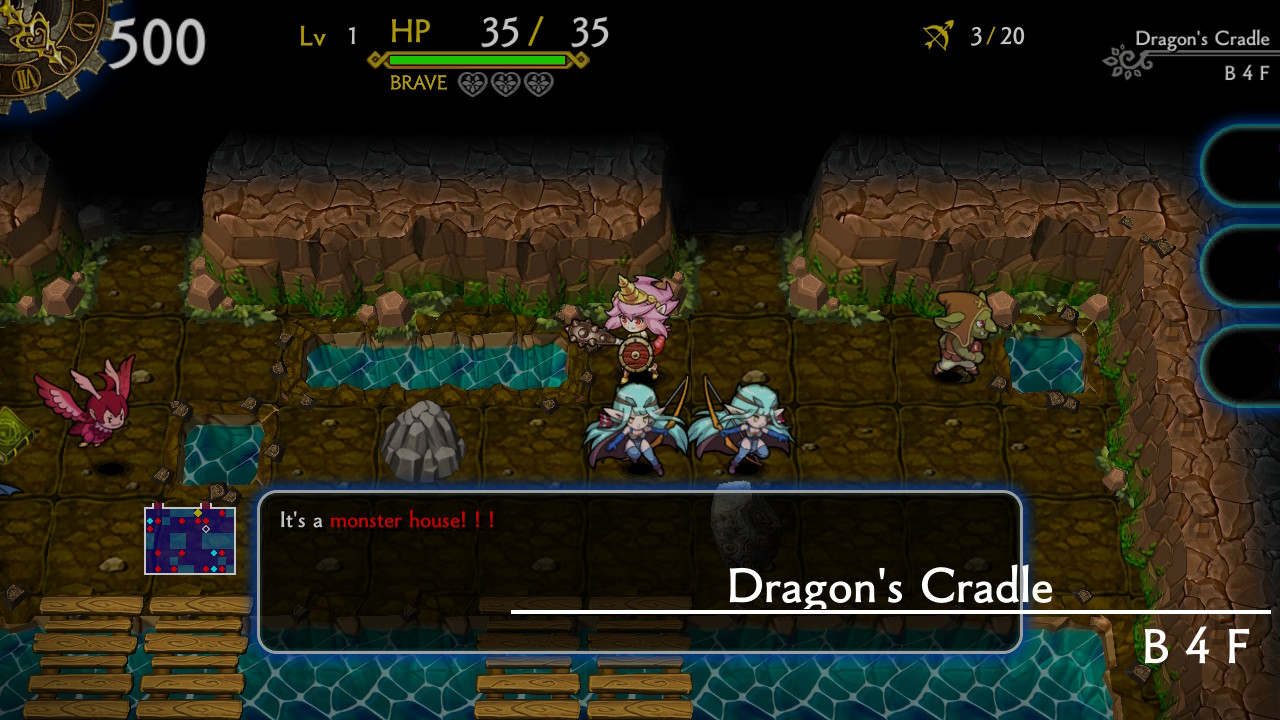 The storyline is pretty much non-existent. Given that the translation was obviously done by the Japanese devs using some automation process, every syntax and nuance of the original text has been put through the mangle. What results is a close approximation devoid of any kind of proofreading by a native English speaker. This is the Achilles heel of the whole product. For people new to the genre and not familiar with any previous roguelikes or Mystery Dungeon games they will have a hard time understanding any of the high-level systems employed by the title.

Besides the main adventure, there is an option to try your hand in the “Fairy Garden”. This contains 50 levels that break down the various gameplay systems into bite sized chunks. They focus on strategies you will need in order to complete the main quest. These involve how to avoid mass foes, using special staffs and potions at the right time. 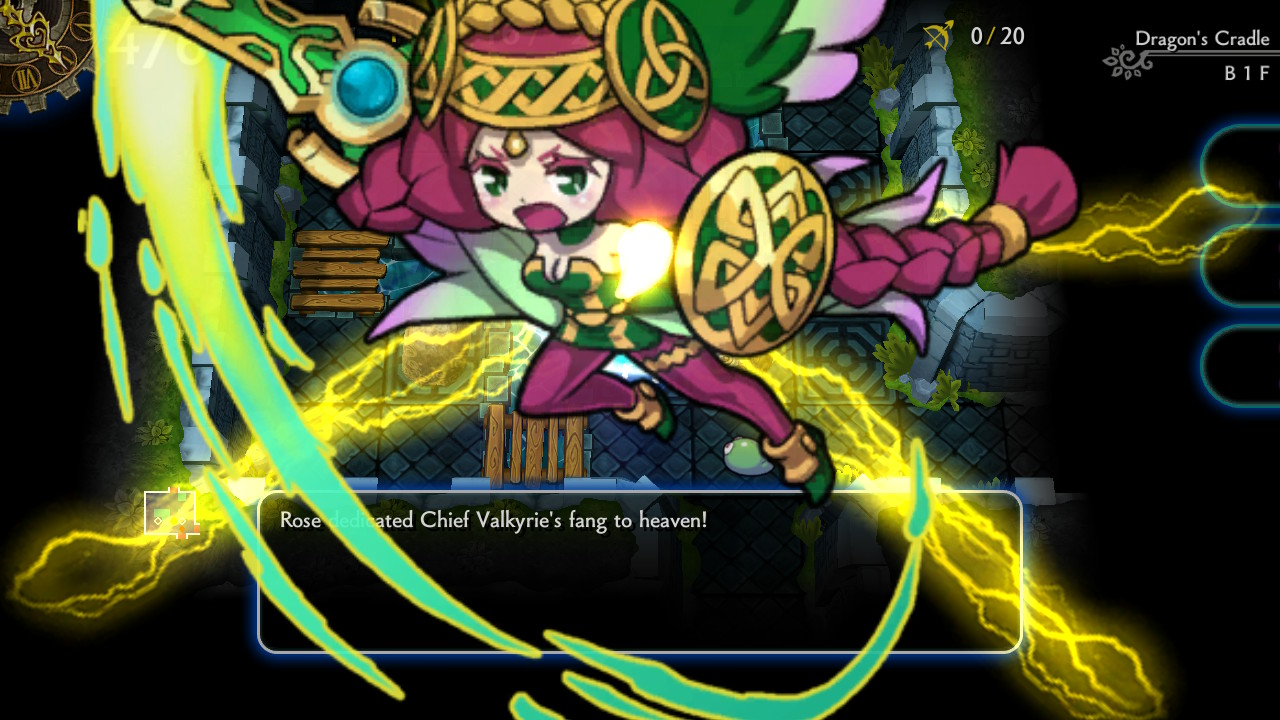 Beyond the usual classic Mystery Dungeon gameplay elements. Dragonfangz has three unique systems that cast it apart from the traditional Chunsoft series. Let’s detail these individually as they are key to understanding and enjoying this game.

First off is the FANG system. Defeating monsters sometimes drop these small stone-like tokens. By equipping these you can gain the ability of the fallen foe. Given that there are 200 types of enemies, this adds a tremendous amount of extra skills to Rose. Each fang has three basic elements to it. You can equip up to three of them in your special ability bar. These can then be powered up by the BRAVE system. They also have a secondary buff, which can be extra health, defense stat points, or give you extra arrows and dragon time moves. You can also consume the fang which gives a variety of one-off or permanent stat skills boosts

Next, we have the “BRAVE” system. Hardened roguelike players know that using corridors and the basic layout of a dungeon in order to protect yourself from assault from many angles is the key to surviving any adventure. This new system rewards the gamers to play in the open. When the 8 spaces adjacent to Rose are obstacle-free, her attacks are more powerful and every hit fills up both the brave meter and charges up any FANG abilities. This radically alters the core gameplay from a more cautious approach to a measured offensive strategy.

Lastly, we have “Dragon Time”. This is displayed in the top left of the screen. It counts down with every move you make in the dungeon. When it is positive, Rose gains one health point per turn. Once it hits zero, Rose loses one health point per turn. This feature forces you to not dilly dally on any level. Every floor deeper into the labyrinth adds 150 moves to the clock. 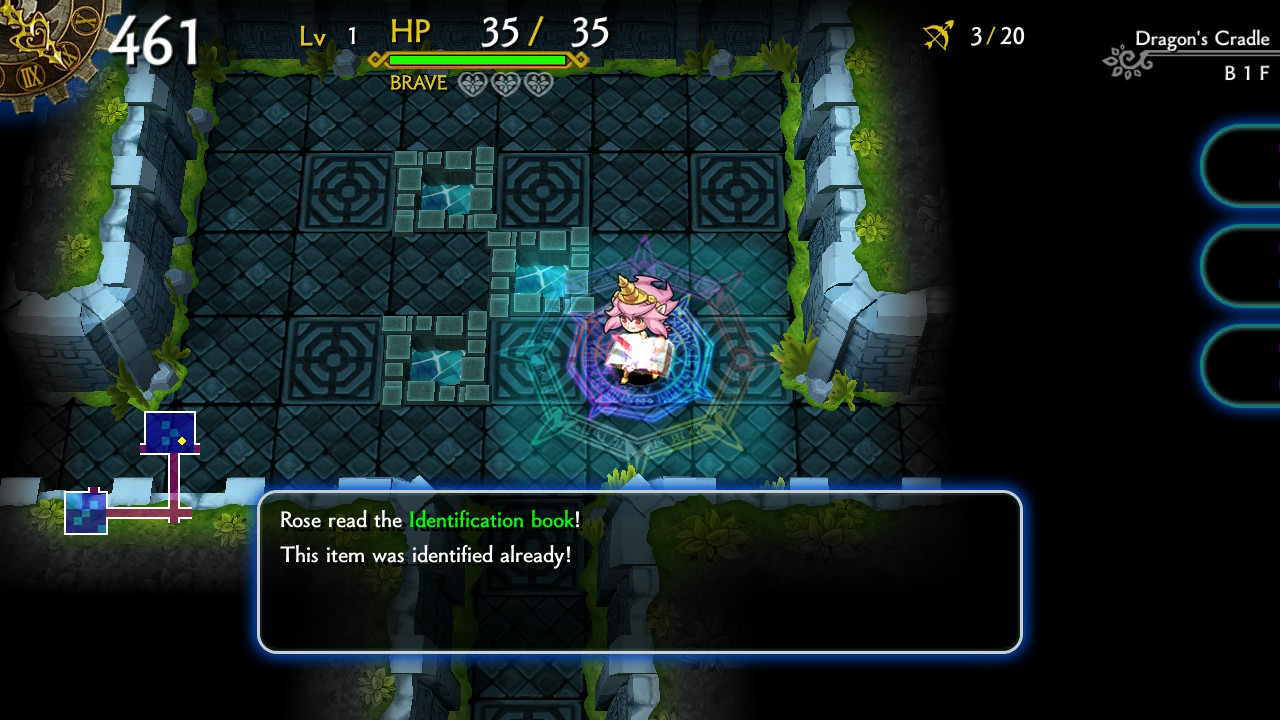 The sprite work is top class. I’m glad that the usual Chibi style has been toned down on the main character. The menagerie of creatures that roam the dungeon is both numerous and inventive.

None of the title sets oversteps their presence. The devs have done a good job of switching from the initial stone floors to rocky areas festooned with watercourses and rickety wooden bridges. This keeps the adventures fresh and appealing. There’s nothing worse than pounding through level after level of generic looking dull rooms looking for item drops. 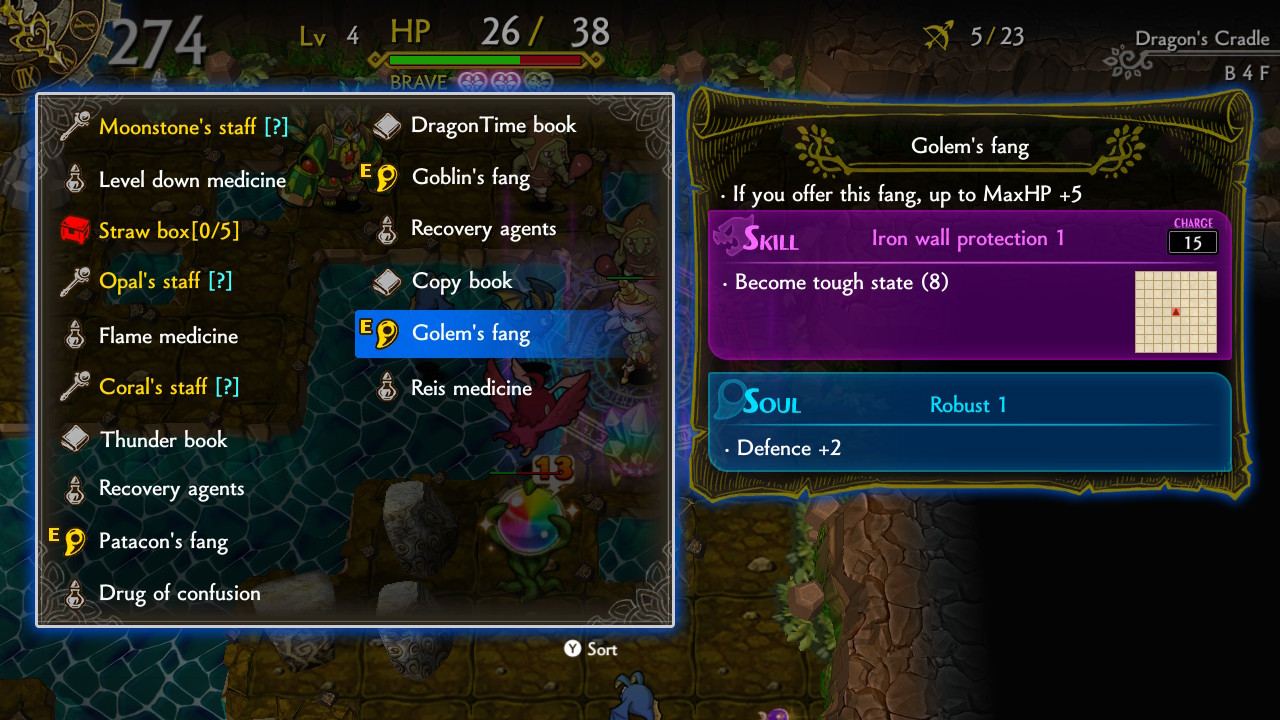 The soundtrack is of the same quality as many JRPGS, in fact, the whole score is very reminiscent of the Etrian Odyssey series. Japanese developers know how to write high-quality tunes that stick with you. Superbly orchestrated melodic themes with undulating piano scales and soaring strings. Just really well-crafted tackle that stands on its own.

The spot FX are what you would come to expect. The battle sounds are suitably crunchy. Swords and axes hit with a satisfying thwack. Activated staffs and potions sonics are all zippy and full of magical zaps. The main character crys out in Japanese whenever she levels up or powers up. 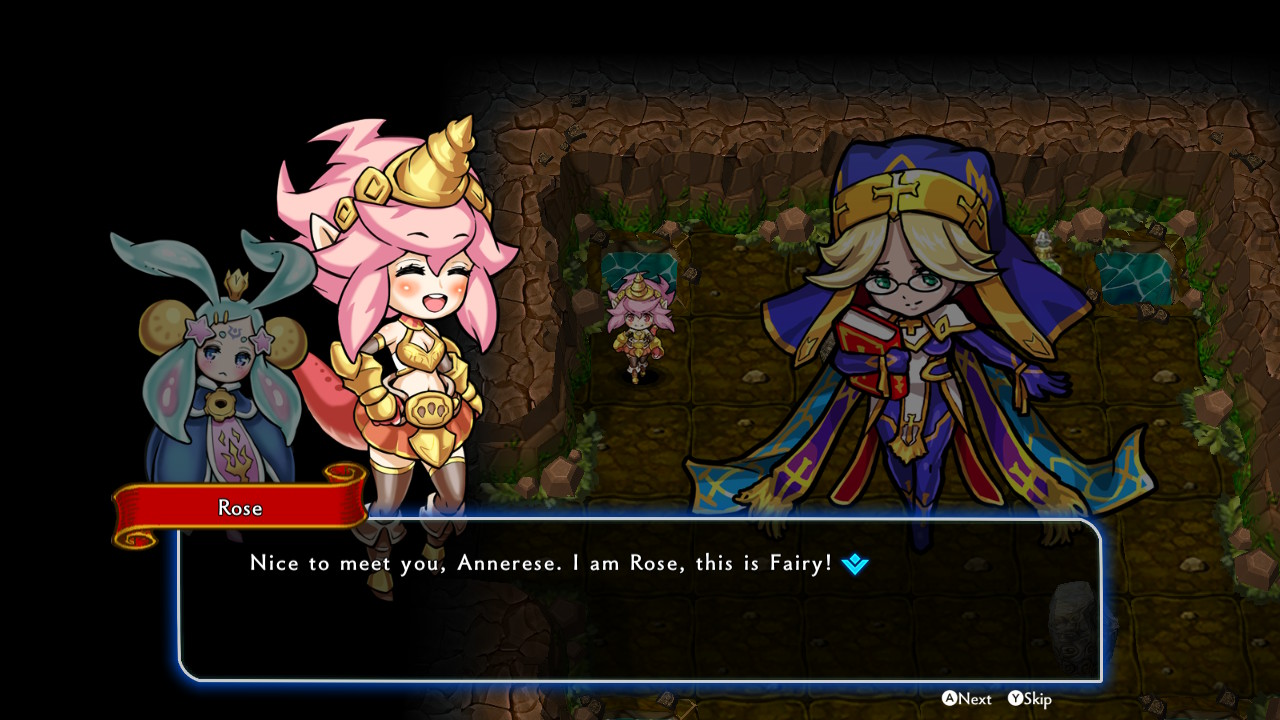 This is very much a console port. So the PC options are scant and pretty bare bones. Beyond the ability to change the display resolutions, window mode and enabling shadows, there no other graphical adjustments available. Three sliders are present for music, sound FX and voice-overs.

That being said, I have to nod to some of the basic burnt in features that the game possesses. The opening tutorial and first run through the dungeons are replete with pop context sensitive information screens which detail the various gameplay facets as you use them.  One particularly cool feature is the overlook map viewpoint. This allows the player to get a zoomed out view of the entire level you are currently in. you can then scroll around and form tactics. This is very cool and extremely helpful, especially in Monster rooms where every step has to be done with military precision in order to survive.

I played the game exclusively with my battered old 360 pad. Considering the game is an almost exact port of the Nintendo Switch console version (albeit with upscaled visuals) it works superbly. This cannot be said for other control devices. There is no mouse support whatsoever and the basic keyboard controls have no custom bindings.

This is game I’ve been waiting years for. A full fat Chunsoft roguelike in all but name. Toydea has done a stellar job in bringing this to the PC platform. Not only have they delivered, they have added their own unique spin on the gameplay by adding the FANG and BRAVE systems which encourage the player into more offensive strategies. This heightens the excitement with a fantastic risk/reward element. The production values beyond the wonky translation are superb. This Dragon bares its teeth with an intoxicating and deep roguelike. Highly recommended.