Abandon Ship is the closest thing that you can get if you were to mix the FTL formula with an Age of Sail setting, but that doesn’t necessarily mean that this is just a copy of FTL in that context. Abandon Ship brings a fair share of new things to the table, but some of these might not appeal to every person.

The premise of the game is pretty straightforward, you start off as a high ranking member of a cult that has managed to summon a Kraken, but upon seeing this creature unleashed, you seemingly snap out of whatever hypnotic state you were in and you make a run for it. In doing so, you figure out that you’d be better off if you weren’t all by yourself, so you find yourself a selection of sailors from a cult prison and steal one of their ships, thus beginning your long journey of attempting to disrupt the plans of this cult.

As far as gameplay goes, you’ll be in charge of your own ship, as you sail across a series of procedurally generated zones filled with enemy encounters, choose-your-own-adventure style of events, a fair share of side activities, as well as plenty of moments where the randomness of the game might just dictate the fate of your crew. This essentially boils everything down into two different sections, exploration and combat. The former is pretty simple, as all you do is essentially tell your ship where you want it to move inside these squared areas that represent each zone in the world map, where you’re also able to see where any and all encounters are located. 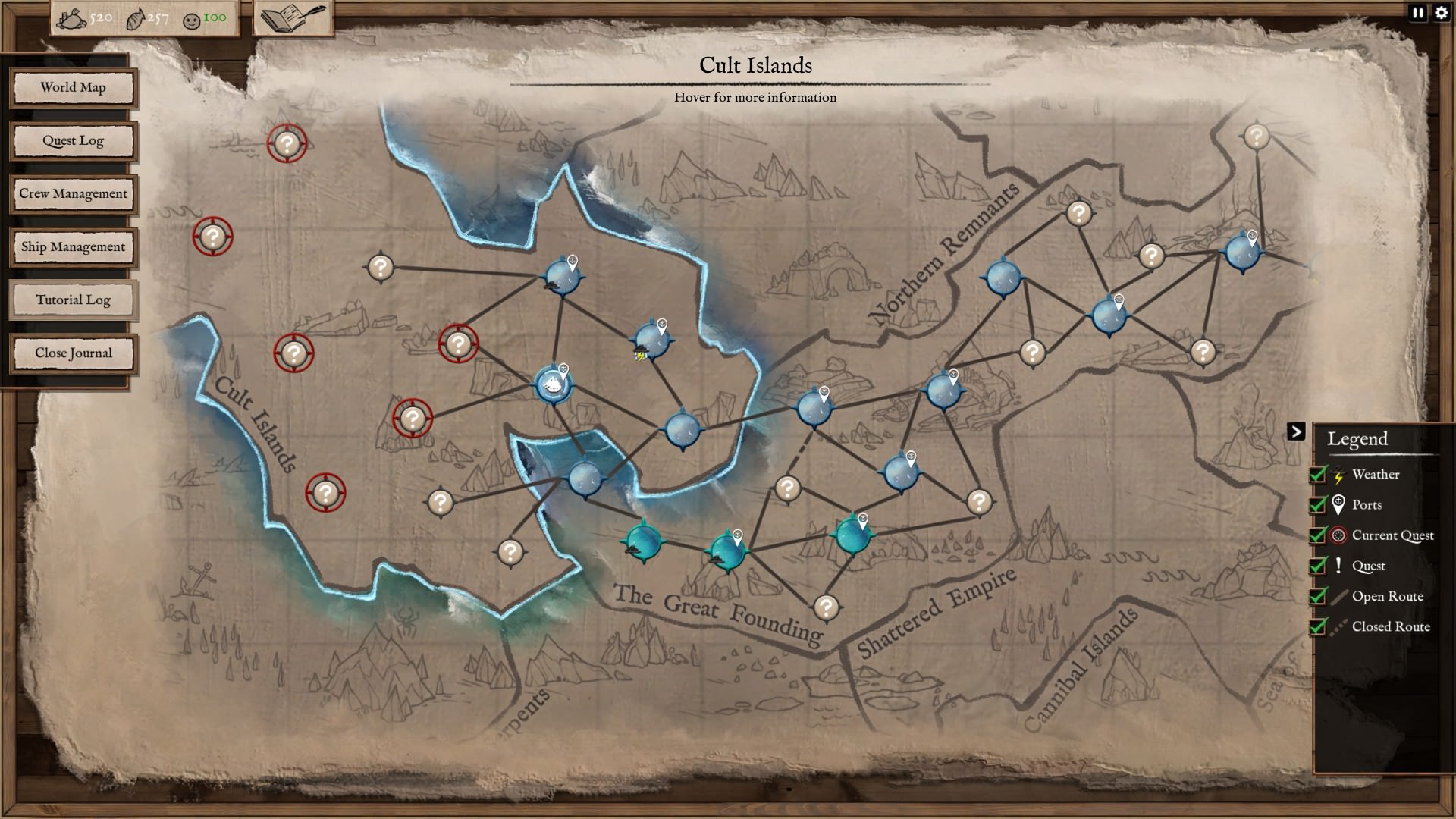 Now, the combat is most likely going to be the main appeal of this game to most people, including a few management elements that come along with it. Combat takes place in real-time but you can pause during the action, which allows you to issue orders carefully and without feeling pressured by the impending danger. Confrontations always occur between two ships, except a few rare occasions where you’re boarded by these sea creatures called the Haliphron. This means that the only differences between different combat encounters will be based solely on the enemy ship composition, like how many and what type of cannons they have. Ultimately, this will lead to some repetitiveness whenever you keep encountering the same type of ship, and even if not, I didn’t bother to adjust my strategy when fighting different enemies and I managed to get until the end of the current build.

Nonetheless, there are other features that can spice things up and encourage different playthroughs, besides the obvious random nature of the game. There’s enough weapon variety to at least allow for two different approaches to combat, one which focuses on long-range fighting either by using mortars or a specific type of cannons whose damage increases the further away you’re from the enemy ship and another one that prioritizes boarding the enemy ship and ramming it. Still, I feel like there should be more to it, there is a decent amount of potential here, and it would be great to see new types of weapons of wacky nature. 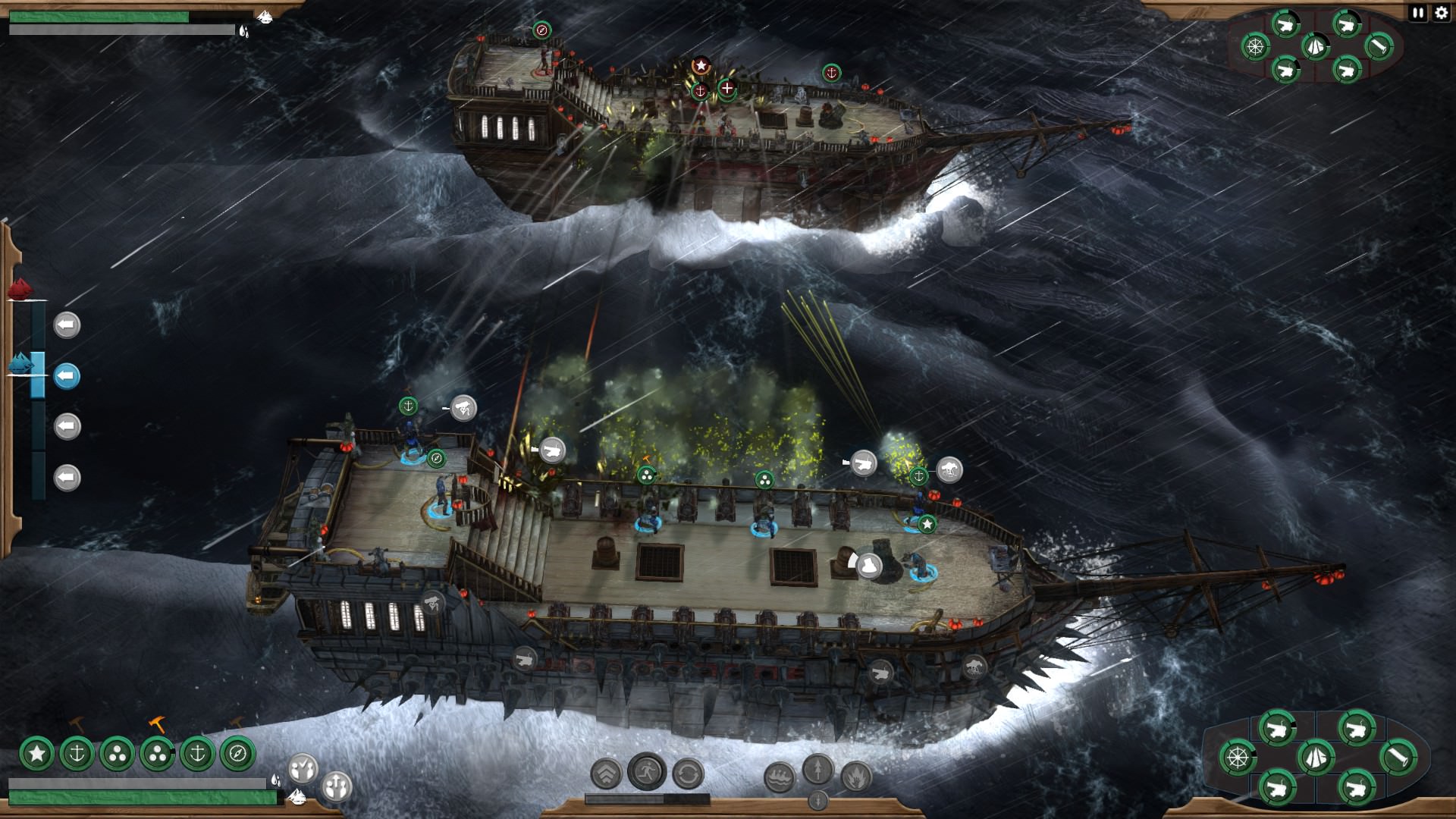 While the combat is fun and entertaining, crew management also feels pretty barebones right now. The crew of your ship can go up to six different members, as well as six different classes, which includes the protagonist as the captain himself. Each character has their own stats, and at first, it’s more proficient at a specific task than the rest of the crew. With that said, as they execute certain tasks, they’ll level up the stat that corresponds to that task. Still, leveling up a character ends up just being a passive boost, there are no special abilities that you can acquire. For instance, there are gunners that reload weapons a lot faster than others, and sailors that can repair the ship much faster than the rest of the crew, but once each member engages in a specific activity for long enough, they’ll also level up their stats and be on even field, so it kind of defeats the purpose of having different classes.

Besides what I’ve already mentioned, there’s another pretty obvious issue that is related to your crew size. While at first a six-man crew is more than enough to keep you going, once the enemy starts fighting with bigger class ships, sometimes with a crew of upwards to twelve elements, it can become somewhat tricky to compensate for your numerical inferiority. Sure, it’s perfectly doable, but even if you purchase a new ship you’re still stuck with the six-man limit, and there isn’t any reason to buy any specific type of ship other than the one that has most health points. It would’ve been nice to see more options in this regard, instead of just going straight for the ship with the most health and weapon slots and upgrade it to the max, having different ships that would fit different play styles would be a gamechanger. The game comes with a story campaign, as well as with another campaign more focused on combat that is about 30 minutes long, but given the fact that the game is still in Early Access, story mode is unfinished at the moment. With that said, unlike most games in this so-called rogue-lite genre, this one seems to rely quite a lot on the player progressing through its story in order to unlock new things and get any actual sense of progress other than its gameplay alone. In a way, the questing system lays the foundation for the players so that they have a clear path forward, almost seemingly guiding you throughout the entire way, while still offering plenty of secondary activities that you can pursue.

Right now, Abandon Ship shows a lot of potential, but it’s also evident that it suffers from streamlining most of its gameplay elements. The combat system is great, but it really needs a lot more variety to spice things up and keep players hooked in the long run, including ships and increments of the crew size. The randomness of some of the events can also feel extremely discouraging, especially in the early game, when choosing the wrong option can lead to the instant death of a crew member. In any case, the current Early Access build offers about 9 hours of content, which is already a decent amount for a work in progress of this type of game, but I wouldn’t recommend pulling the trigger on this one yet, unless you want to be part of the development process. Nevertheless, do keep an eye out for this one once it releases!