Dead in Vinland applies the successful Dead in Bermuda formula to a Viking setting, making a few changes along the way.

Dead in Vinland is the latest game from CCCP, published by Playdius and Plug In Digital. It’s the spiritual successor to Dead in Bermuda, though the setting has absolutely nothing to do with that earlier game.

Dead in Vinland tells the story of Eirik and his family, cast out of their Norse homeland by an angry mob baying for Eirik’s allegedly bastard blood. Unable to do anything but flee in a panic, Eirik and his family find themselves adrift in a stolen Viking boat. After days and nights at sea, they’re beset by a storm of titanic proportions that could only have been sent by the gods.

Eirik wakes the following morning on a sandy beach and is overjoyed to find his daughter, his wife, and his wife’s sister all alive and well nearby. The family sets out to start a new life on this strange western land.

The graphic-novel-like introductory video is well drawn and simply animated, but does a good job of setting the scene. The game interface has been fancied up a bit since the previous game, though you can no longer scroll through your camp — you can only reach each individual station by clicking on it. The funky-but-pointless parallax effect on each camp screen is still present, and looks as cool as it did before. 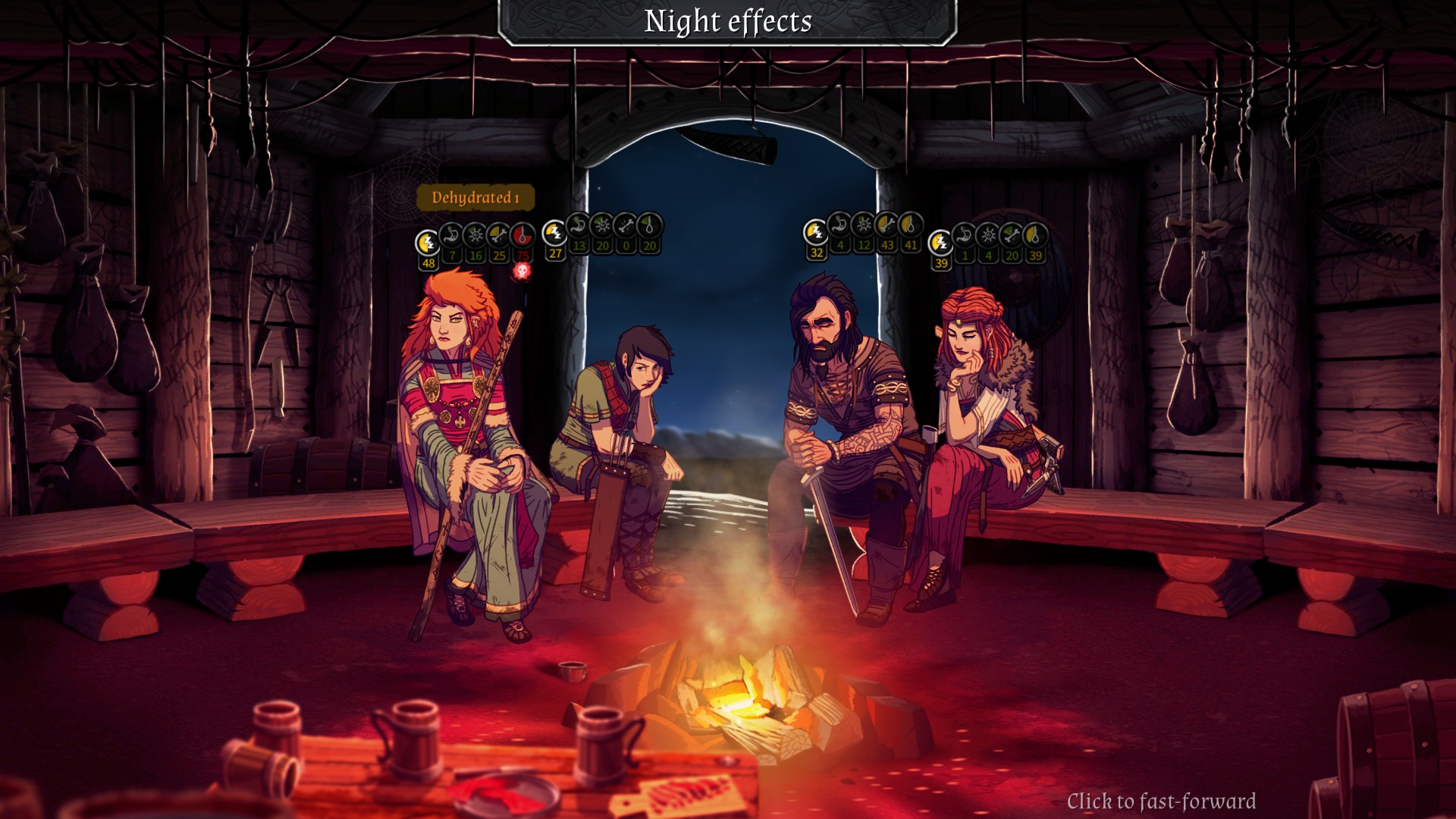 The world and character art have a very different style to Dead in Bermuda. It’s still comic-like here, but whereas the previous game’s characters looked like they could have stepped out of a cartoon, this game has a darker, harder feel. It’s like the difference between the art from a Detective comic compared to The Dark Knight Returns. For some reason, though, Blodeuwedd looks nothing like her portrait. 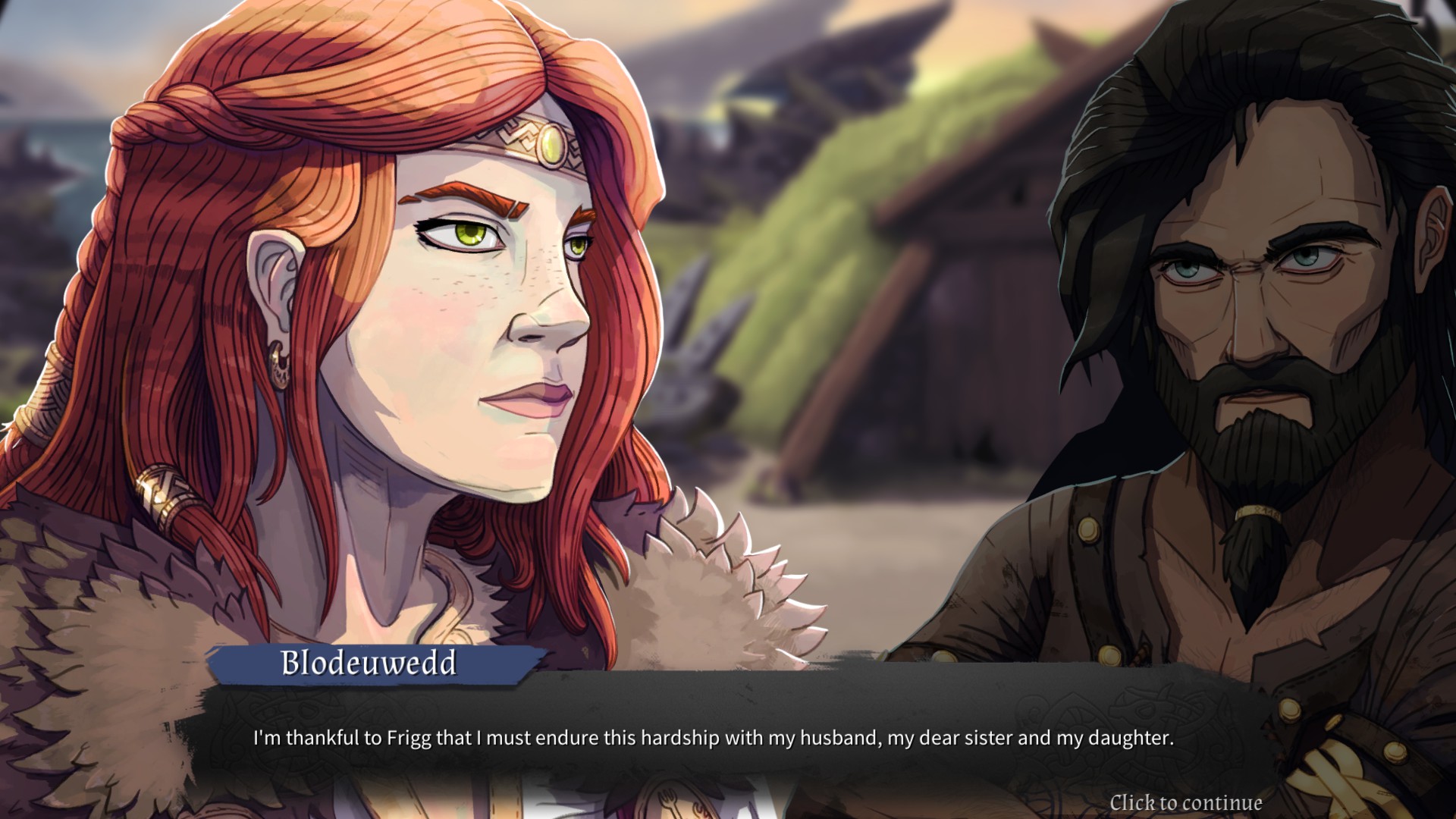 Background art is very well drawn and some of the island scenes are really quite pretty.

The game interface is clean and very easy to use. It’s easy to miss some steps while you’re learning the game and it doesn’t warn you when you do something silly (like leaving someone on a crafting activity when there’s nothing set to craft), but a simple pop-up warning mechanism, or even just an exclamation mark icon somewhere prominent, would help with that. The new combat interface also looks nice and works well.

Music is excellent, with numerous tracks that fit the game perfectly. There’s everything from slow tracks with beautiful soft wind instruments to fast, heavy beats to set your heart racing. It all has a great Norse vibe, too. Sound effects are good, though nothing spectacular, and there’s no in-game speech.

Though I’ve played much more of this game than Dead in Bermuda, I’ve received the impression that the quality of the writing here is considerably worse. I’ve seen quite a number of spelling and grammar mistakes, though I hope at least some of these will be fixed by the time the game is released.

From what I’ve seen of Dead in Vinland so far, it introduces very little in the way of major new gameplay mechanics over its predecessor, Dead in Bermuda. There are some enhancements and extra bits and pieces — as well as a couple of strange changes for the worse — but overall the core gameplay is in my opinion mostly the same, with the exception of the new combat system.

The game is turn-based, with each day comprising two shifts — morning and afternoon — and a night shift. Each character in your camp can perform one task in each of the two day shifts, such as scavenging or harvesting resources, using crafting or harvesting stations, crafting or upgrading camp areas, resting, or exploring the island. Characters aren’t able to perform any tasks at night; instead this shift is used for eating, resting, and talking with the group. There are no joint tasks anymore, or at least not in the early game, anyway, so you can’t build up relationships by working in pairs. 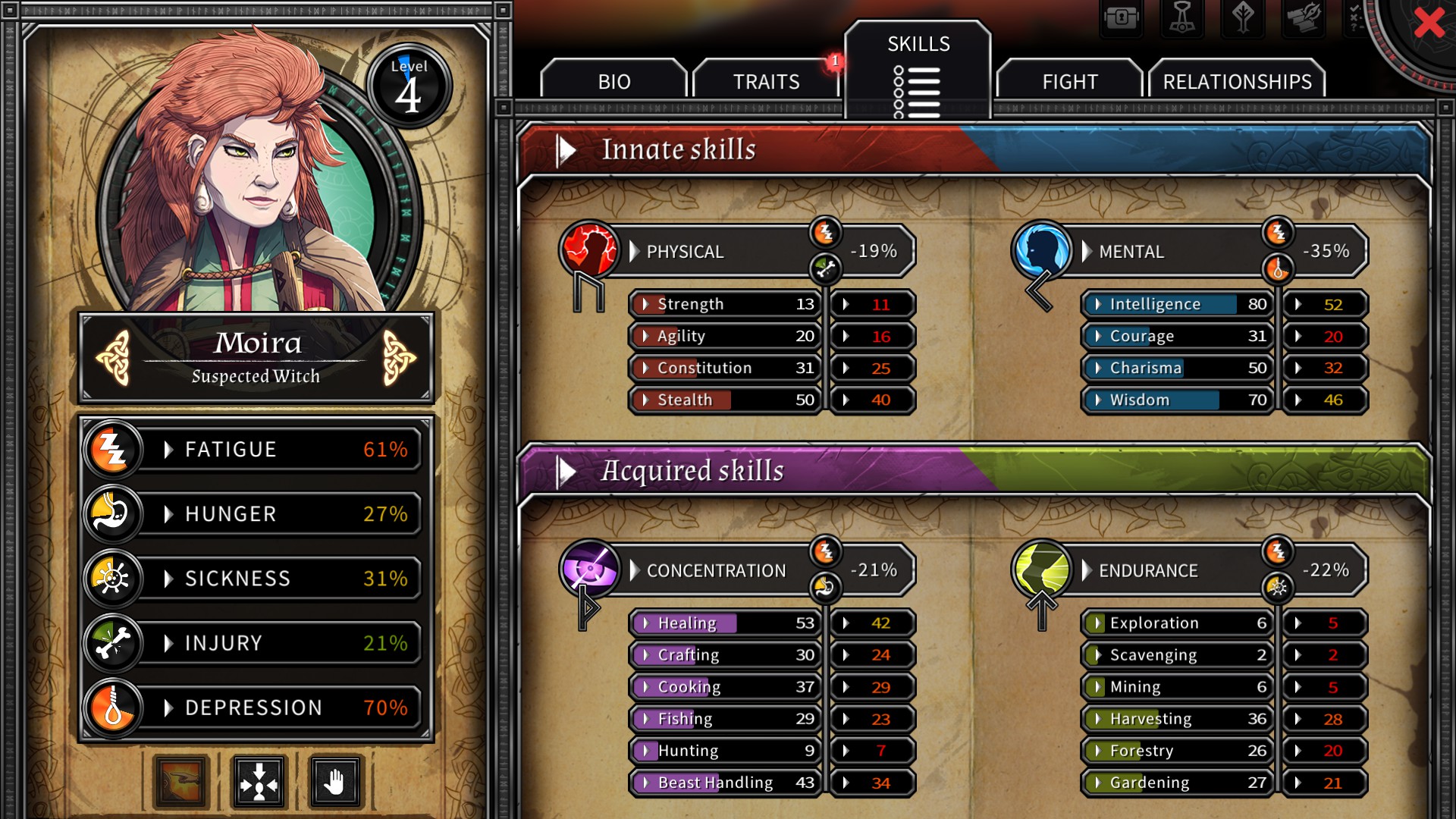 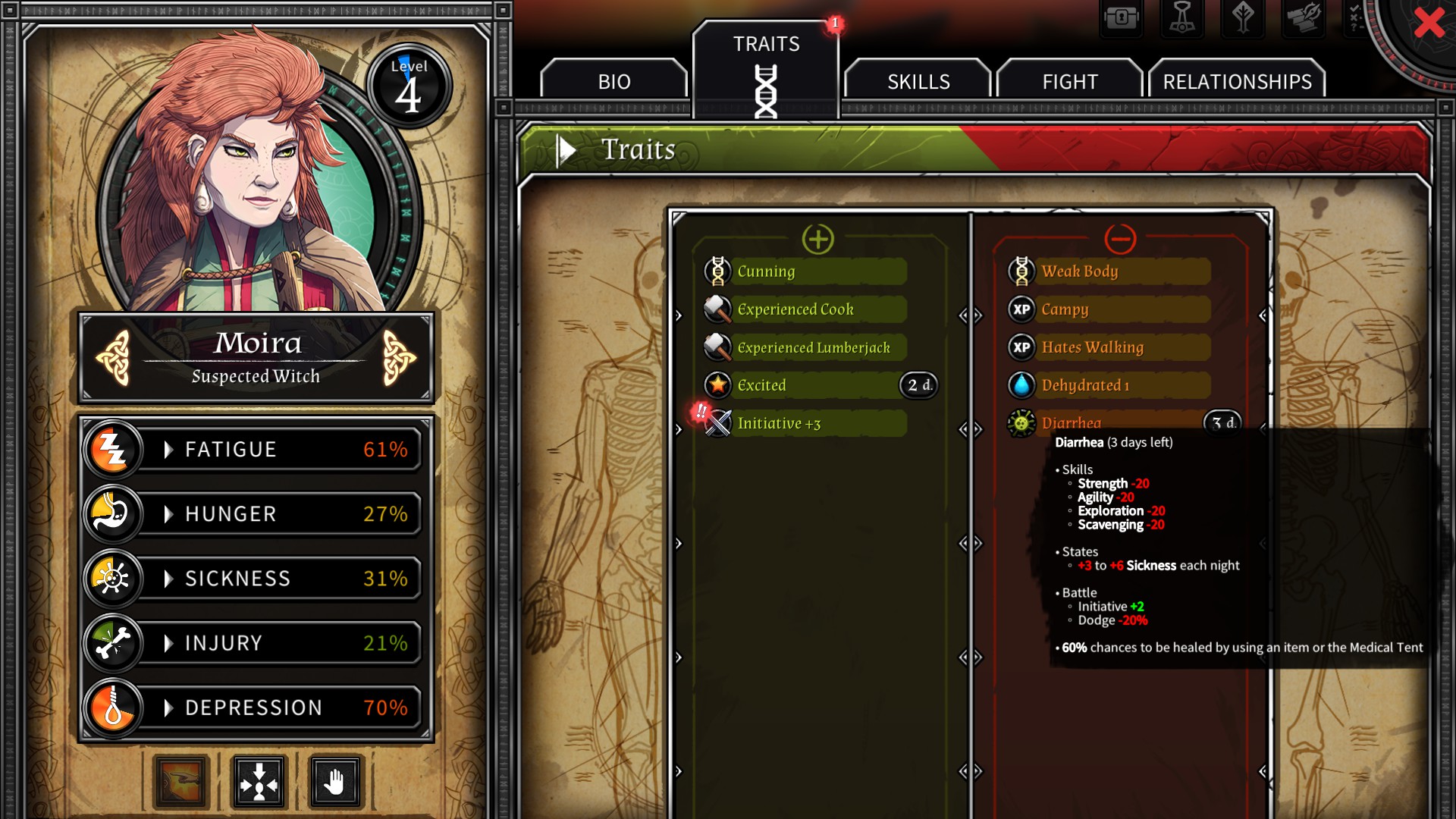 Each character has a number characteristics and skills that affect their performance in various tasks, as well as five key attributes: depression, fatigue, hunger, injury, and sickness. If any of these five attributes reaches 100 then the character dies, usually ending the game then and there. Each task a character performs affects his or her key attributes, usually raising fatigue and depression, but sometimes affecting others as well. One of the main problems I have with the game is that these increases aren’t always predictable; in one game one of my characters went from mid-60s fatigue to being literally dead tired in one shift, thereby ending the game. Actions that reduce depression are rare, too; most of my games have ended up with a certain character committing suicide. 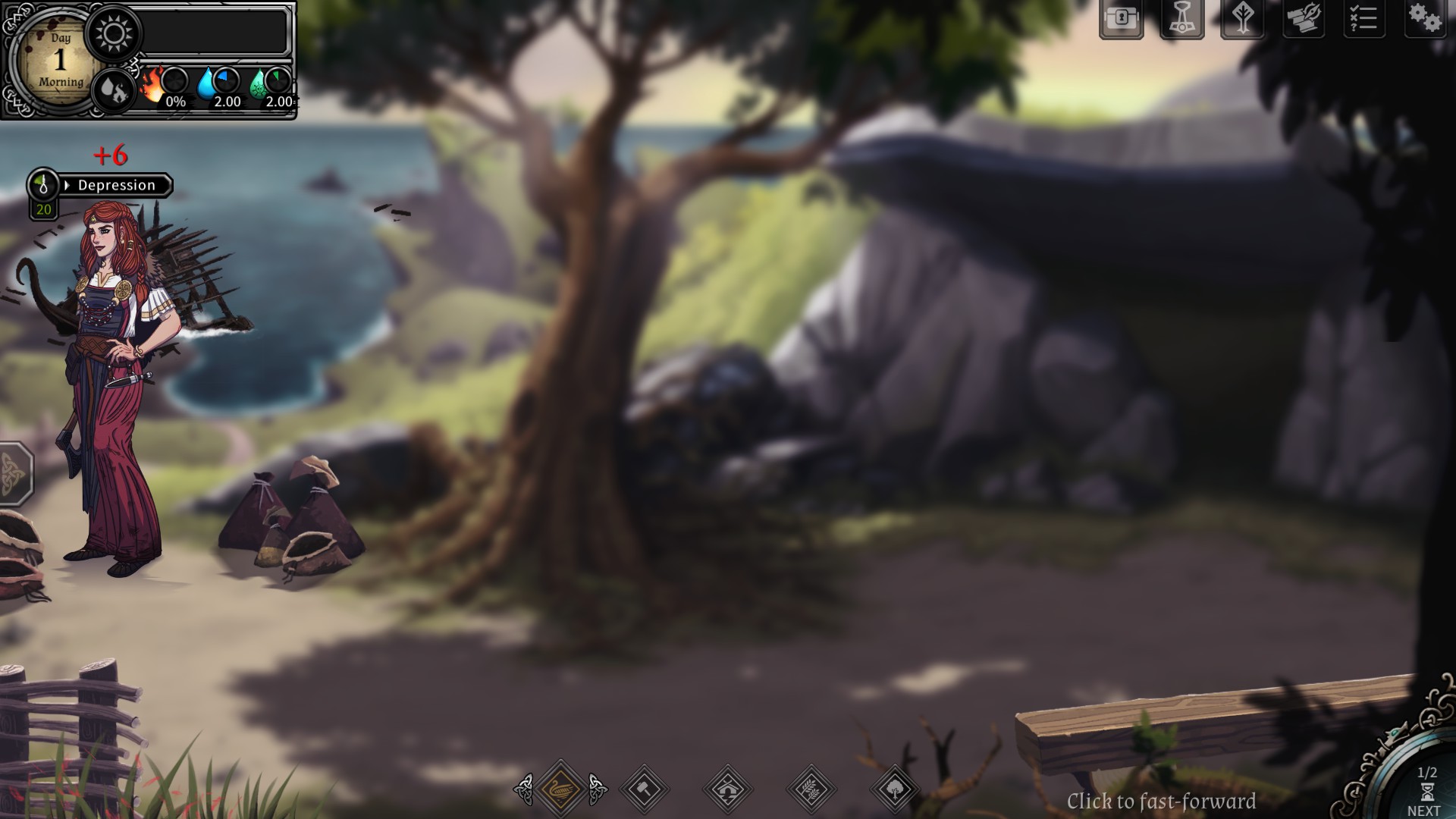 Early on you meet Negan — er, sorry, I mean Bjorn Headcleaver — the leader of a band of thugs who seems to rule the island with his huge axe. He beats you all up and demands tribute, thus setting you on the path of the main plot. You need to develop your camp and skills and recruit more people to your cause, all while producing more than what you need so you can give a large portion of it to Bjorn every week. 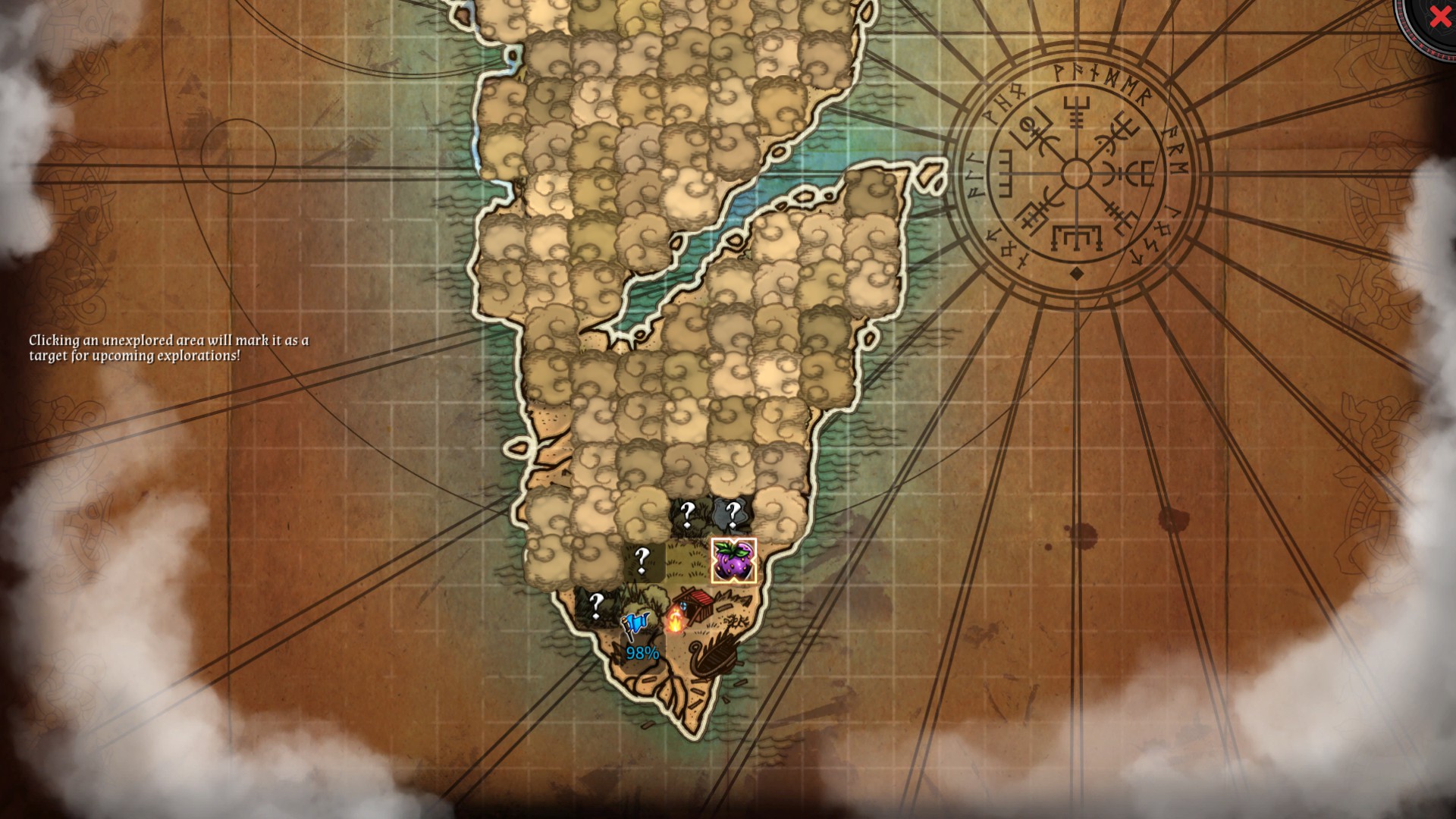 Exploring the island is key to progress in this regard. Whenever you assign a character to the exploration task, you work your way towards discovering a new area of the island. Each discovered area has one interactive object or person, sometimes with multiple actions available. Once discovered, an area remains available to you on the (large) island map until you perform the area’s interactions: mostly, but not always, an extra opportunity for scavenging, hunting, etc. And this is another big problem I’ve found with the early game: after about Day 8 every exploration seems to end with a combat encounter. 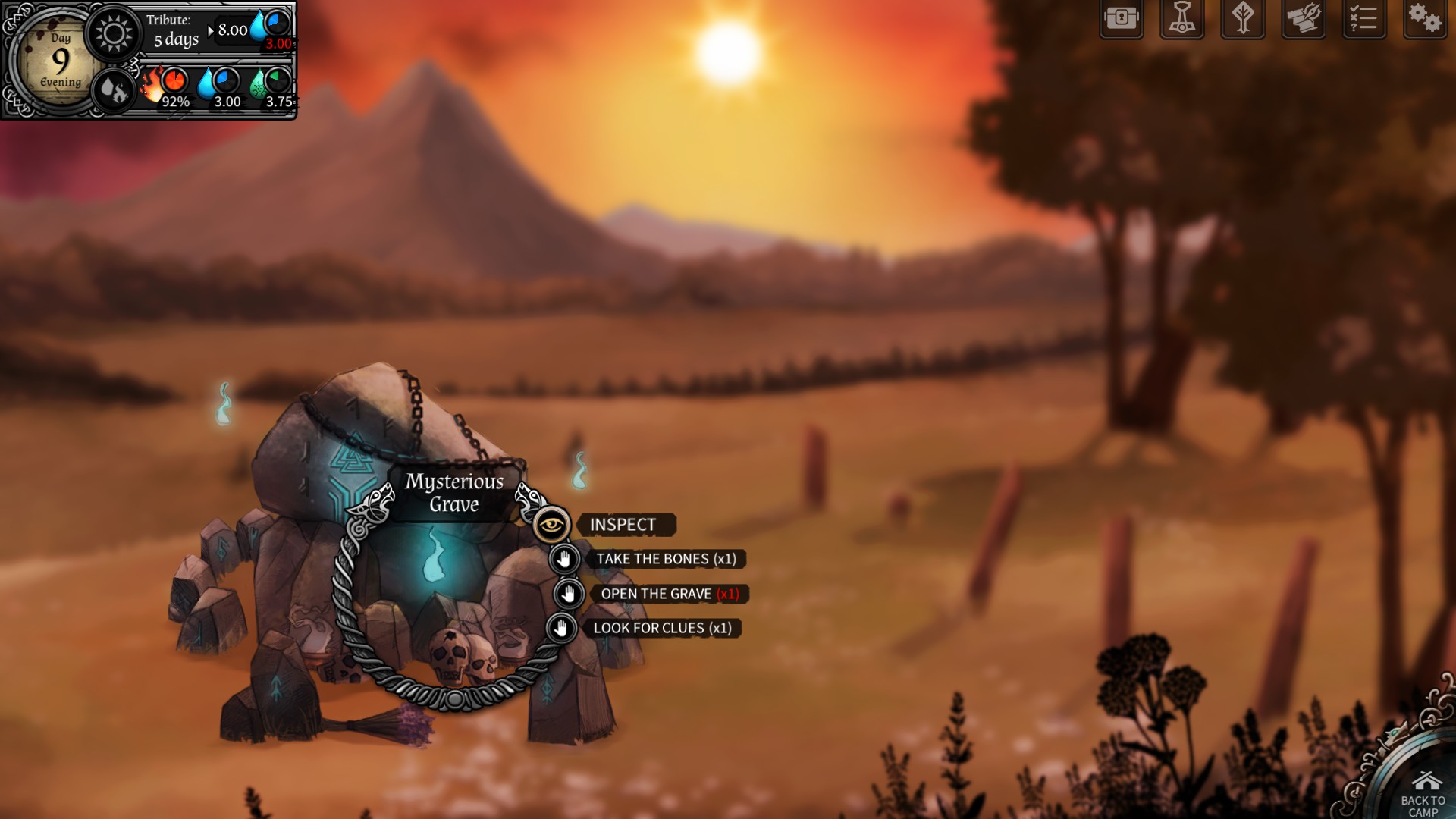 Combat is turn-based and seems most similar to a JRPG system. It works reasonably well, but becomes rather boring quite early on, as for the most part you tend to just take the same actions for each character. RNG tends to cripple your game more often than lack of skill or planning, though, as characters start in random positions and poor initiative rolls can cause havoc. After the first few encounters I’d already had enough of it. 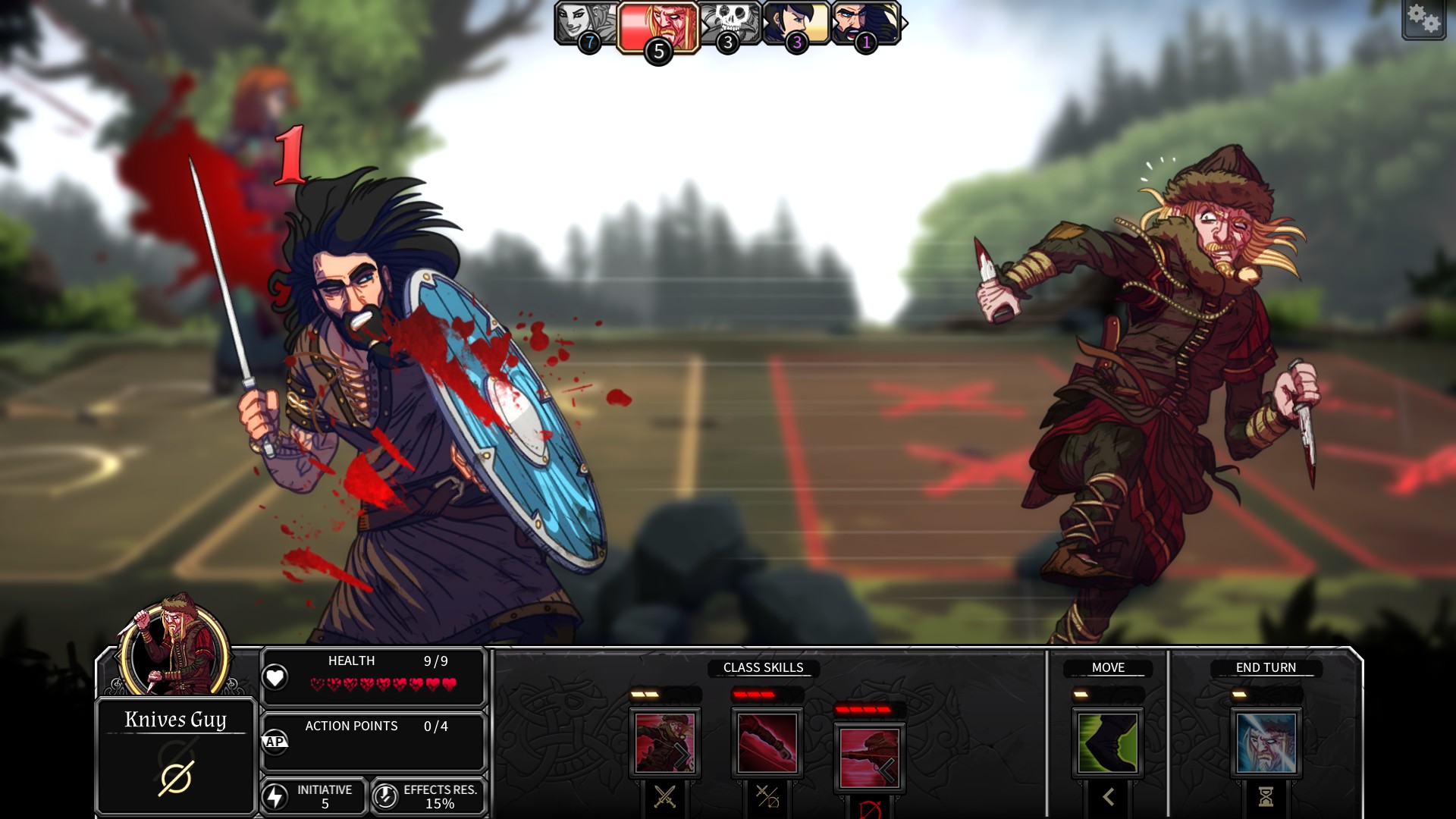 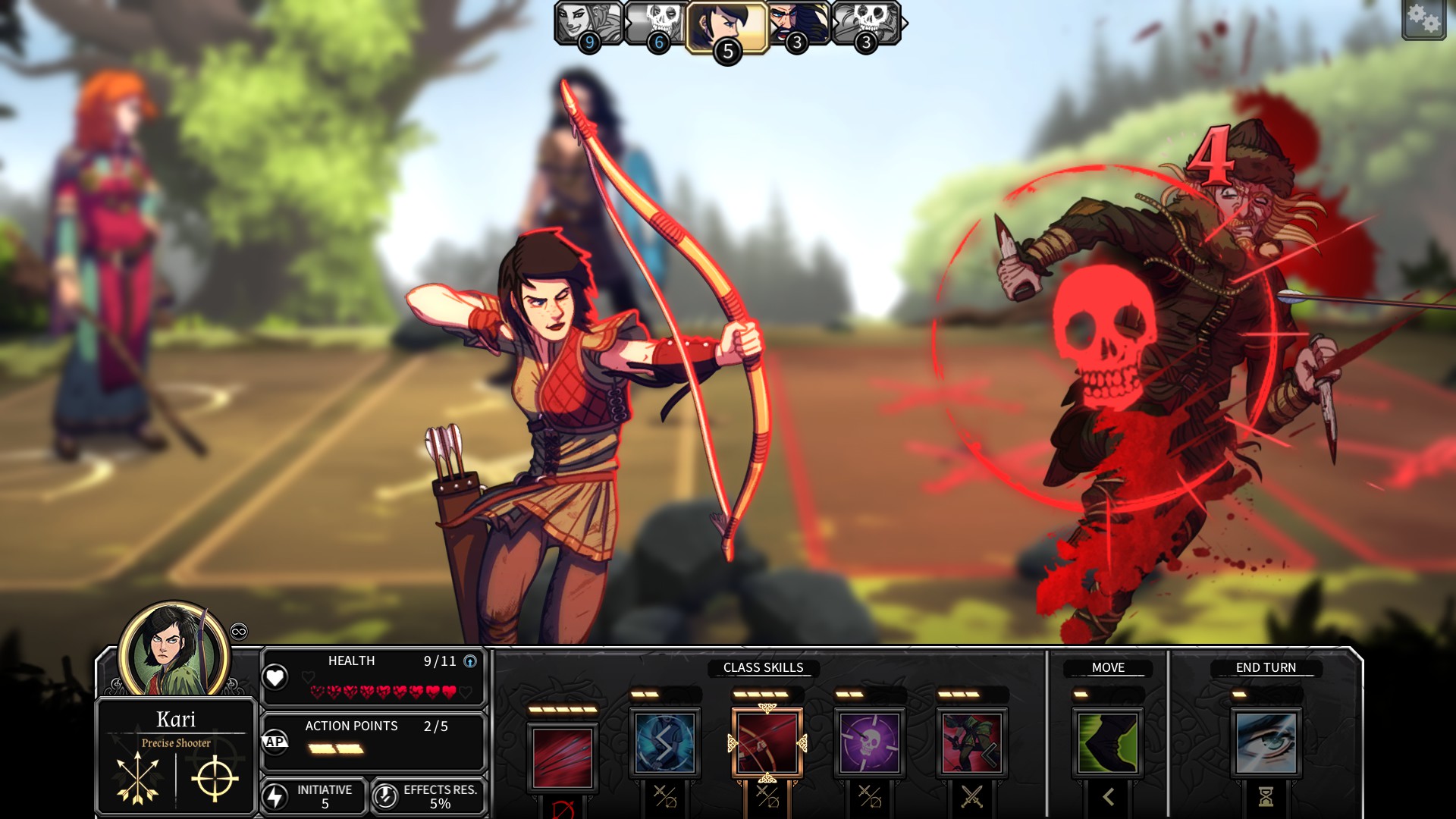 The other thing I’ve noticed is that at normal difficulty the game is hard. As with its predecessor, this is a game of attrition: each day you need to trade off small steps of progress against ever-increasing negative attributes. If you have a lucky run to begin then you can set yourself up quite well for a while, but if you don’t manage to find enough food, or have unlucky encounters, you can quickly find your characters in a tight spiral to oblivion. Being a fan of rogue-like games I’m used to heavy RNG influence, but I don’t think the developers have quite pulled off the right balance here; Dead in Bermuda did it better. I’d recommend playing on the easy level to start with, at least.

There’s not really anything that Dead in Vinland does wrong, exactly, but it sort of falls flat when compared to Dead in Bermuda. It adds some features and loses others, and fancies up the interface, but I’m left feeling as though it doesn’t offer much more than the previous game. In some ways I like it less, particularly with the difficulty balance and RNG influence.

If you’re a fan of Dead in Bermuda or similar games then Dead in Vinland is probably worth your time, but don’t expect anything revolutionary.