PREVIEW: They are Billions

Finally! A zombie RTS that also has base building, resource management ,and massive hordes charging at your defenses. Is this really a dream come true, or just a nightmare?

I’ve played around with an idea of a game like this. I remember playing Starcraft 1 ages ago and having fun in that one level with human where I had only soldiers to defend the base from the alien invasion. It was an extremely fun level for some reason, most likely because of the great action in it. Wirh the seemingly never-ending waves of Zergs coming at my newly founded base, things seemed so desperate and I was fighting all the time. Now I’ve finally gotten my hands on They are Billions, a manifestation of one of my gaming related dreams. Is it just one long wave and millions of bullets?

The game borrows heavily from the graphical style of Warcraft/Starcraft, and also the UI, the buildings and their functions felt familiar. No tutorial was needed to start playing since I knew exactly what to do. As this is still version 0.6X, only the survival mode is available and only has one map at the beginning. Three more will unlock after players have made the requirement of beating the previous ones first. The difficulty is tailored by selecting the amount of the population (zombies) and the number of days to survive. There are always the same amount of hordes, so the fewer days to survive means more frequent attacks. The game also has a great scale to specify your difficulty setting. You will not just have the basic “easy/medium/hard/impossible” settings, but instead there is a mixing up of the population and the duration of the game by how you see fit.  It was a nice and great feature to experiment with while practicing towards higher difficulties.

The game starts out fittingly with just the command center and five units with no walls and surrounded by hordes of brain-starved zombies. Since maps are randomly generated, this was the most interesting part of the game when you can see what resources lie nearby and what checkpoints serve as ideal places to build walls into.

Unfortunately, after the third or fourth wave, the game becomes stagnant and you battle less against zombies and more with getting your own resources up to par. It’s more of building a power plant to get a few more residents, only to notice that the food is so low that you couldn’t get residents anyway. After the farms were built, I noticed all my energy went towards the farms.  So, I decided to get back to building some power mills/power plants, which is where I would notice that I need more workers to operate them. This kind of planning might suit some players, but it wasn’t for me. It becomes repetitious and I can’t really say I had much fun with the game between the fourth and final wave. There seems to be just the one right order to build and upgrade everything.

I later found that if I didn’t upgrade my buildings to get a better version of themselves, I had an easier time getting the resources and workforce kept up, but then my colony became HUGE. Managing it’s easy, thankfully, since there’s a handy pause button that let me build and plan in peace, but it’s still a bit of a strange decision that the building upgrades actually make your life harder. Where this became a problem was when I was stuck on a map that had really scarce deposits for stone. Powerplants ate stone- a LOT of stone – and also covered large open areas with stone walls.  With a very low income of stone, this was impossible on most runs, and I failed often in the final waves. At times it felt especially frustrating (after 2-3 hours of playing) since every other resource was showing a decent surplus. In short, the stone was the main reason for all my troubles. And when I started to really aim for getting it, my base expanded and expanded until it became a nightmare to defend.

Problems with the colony building aside, how are the hordes of the undead? Are they billions? No, they aren’t even millions, but certainly tens of thousands, and it’s awesome when the shit hits the fan. I played on as that sinister music was building up and watched the thousands of zombies spreading out and running towards my walls from every possible direction, crashing into the walls while my machinegun towers feasted on them.

In the current version of the game, there are five different zombie types to battle against. Even if the map is full of enemies, their numbers are finite and it is possible to clear the whole map. In addition to this, there are old towns scattered along the map that house thousands of zombies, they start pouring out the minute anyone goes near the houses. I started calling them XP-towns pretty soon. I left my snipers near it, and soon the sound of a unit turning into veterans started popping up. Unfortunately, I had to attend to my base and couldn’t continue to watch how my snipers are slaughtering a town full of zombies. I could have used the extremely useful pause button more while building my base, but I’ve become accustomed to doing it all in real-time.

After playing with the available units a bit, I noticed snipers are really overpowered, even when compared against the cost-effectiveness of the Titan, a massive robot controlled by an English gentleman sitting inside, which is also the priciest unit currently available. There is no enemy unit in the game that could stand against a veteran sniper one-on-one. My team of 20 veteran snipers cleared whole dwellings of doom by themselves. The spitter-zombies that do AoE damage, and slaughtered multiple soldiers on my earlier run, died without even having a chance to attack. The scripted hordes are still so massive that 20 snipers can’t hold that back since they lack area damage, but even then, they help out greatly by killing the tankish zombies in few hits.

I was warned about the final wave (optly named, THEY ARE BILLIONS!), and even still, I couldn’t guess how big it really was. Nothing prepares the player for it when they reach the final wave for the first time with the senseless onslaught that approaches from all four corners of the map. This has it’s pro’s and cons: It looks great, it’s a great fight to the death, but if the death happens to be the player’s, about 3-4 hours of playtime is washed down the drain, time after time. There are game saves automatically when you exit, so there’s no chance to load an earlier save. It’s a ruthless loss. Just like survival-mode should be. Frustrating, and unforgiving.

This game is still Early Access, and one of the things that is coming is a campaign, scheduled for spring release. Not much information is given about what is to be expected. The game definitely needs more diverse content. New maps (inside of buildings, maybe?), new mechanics/interaction with the environment, something else than the one correct order of building things level after level. I loved the developers last game, Lords Of Xulima, and i’m interested in seeing what they cook up with the campaign especially since this is in a totally different genre.

And, if I might add a wish, please give me a mini nuclear missile or two for the final wave. 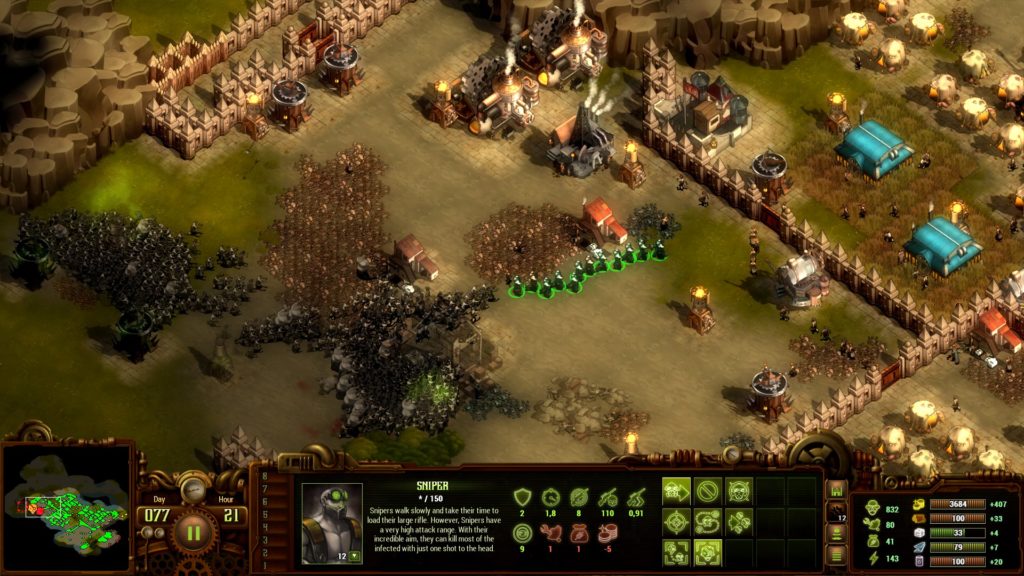 They are Billions was fun at first, but after a while of playing it’s just more of the same. An idea like this sounds great on paper, but even without bugs, good mechanics, and much action, it just won’t hold on its own for long. When the player figures out the correct order for what to build, the game becomes significantly easier. It just has to be done faster on the higher difficulties. I understand that some players will enjoy doing multiple things at once and the turtling style of gameplay that most of us have craved for in every online RTS match.

If the developer can come up with new ways to keep the gameplay fresh in the upcoming campaign, it’s going to be great. This is a dream come true for the fans of zombie-rts.  With minor issues with the colony expansion/resource collecting aside, it’s a great RTS. If I would be getting this now, after knowing what I know, I would wait for more content and see how the campaign turns out. The survival mode alone isn’t enough in my opinion.