REVIEW: Attack of the Earthlings

Attack of the Earthlings mostly great fun, but it becomes a bit of a chore as you approach the end, which is a shame considering the game is so short.

Attack of the Earthlings is a humorous turn-based strategy game from indie developers, Team Junkfish, of Monstrum fame.

Attack of the Earthlings tells the story of an interstellar space ship, one of many in the greedy Galactoil corporation’s fleet, which lands on an alien planet and begins drilling for rare minerals and resources at a tremendous rate, uncaring of the effects on the planet’s indigenous inhabitants.

Unknown to the Galactoil corporate lackeys on board the ship, the Matriarch, an alien with powerful and dangerous abilities, witnesses the ship’s landing, and wanton destruction of many of her species in the process, and decides to do something about it — violently.

You play the Matriarch, an angry alien on a mission of vengeance against the human incursion.

First impressions are good: an attractive, if slightly retro-looking, title screen with music reminiscent of a spooky circus, almost like something from Ghostbusters. Menus are well skinned and easy to use and everything fits well together. Upon starting a new game, the introductory cut scene maintains the high production values; it’s in cartoon format with only basic, animations, but it’s well done and sets the scene well.

The game is rendered in full 3D, but only permits camera rotation by 90 degrees, which is a bit of a shame. At least the zoom range is good, though for tactical play you’ll spend most of the time zoomed out anyway. I found key-based camera panning to be way too sensitive when I first started playing, but at some point that dislike evaporated; I have no problem with it now. Graphics have a good feel to them, consistent with the title screen image, though the levels do feel a little bit ‘samey’ after a while; some different textures and assets wouldn’t go amiss, though I should say that the current presentation does provide a consistent portrayal of the Galactoil ship. 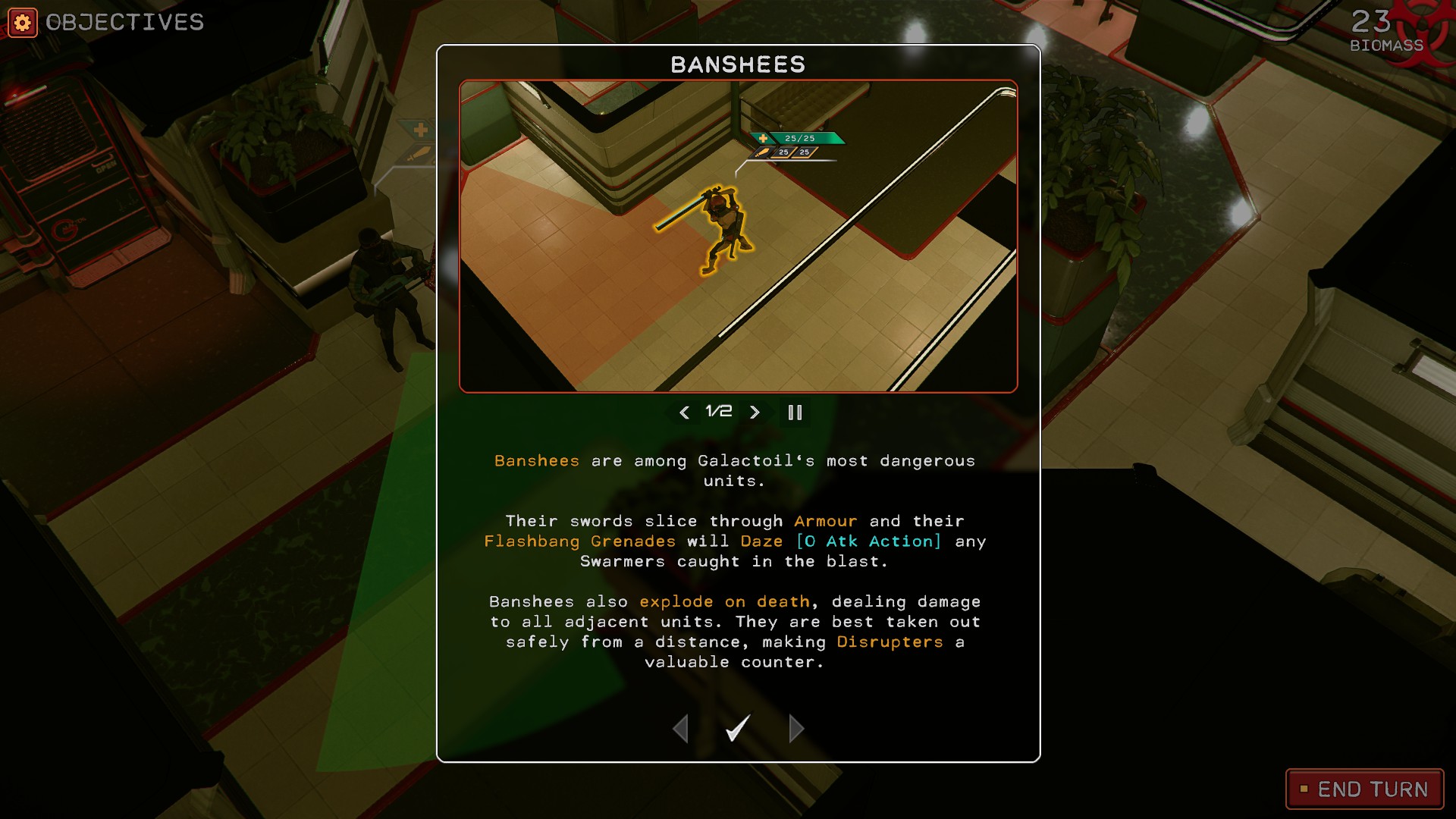 Character models are good — though perhaps not enough variation in civilians in particular — and animations are convincing. The game doesn’t quite manage to promote a feeling of kinship with the Matriarch and her progeny, but they’re more likeable than their human prey, in any case. Apart from the opening animation, the remaining cut scenes are all scripted in game.

The interface is intuitive and easy to use, though I did initially get a bit mixed up with when to press the left mouse button instead of the right. There is a few grammatical errors, such as “it’s” instead of “its”, semicolons instead of colons, and missing commas, but overall the writing is pretty good. I also noticed a graphical glitch with the floor tiles occasionally drawn on top of the flamethrower flames. 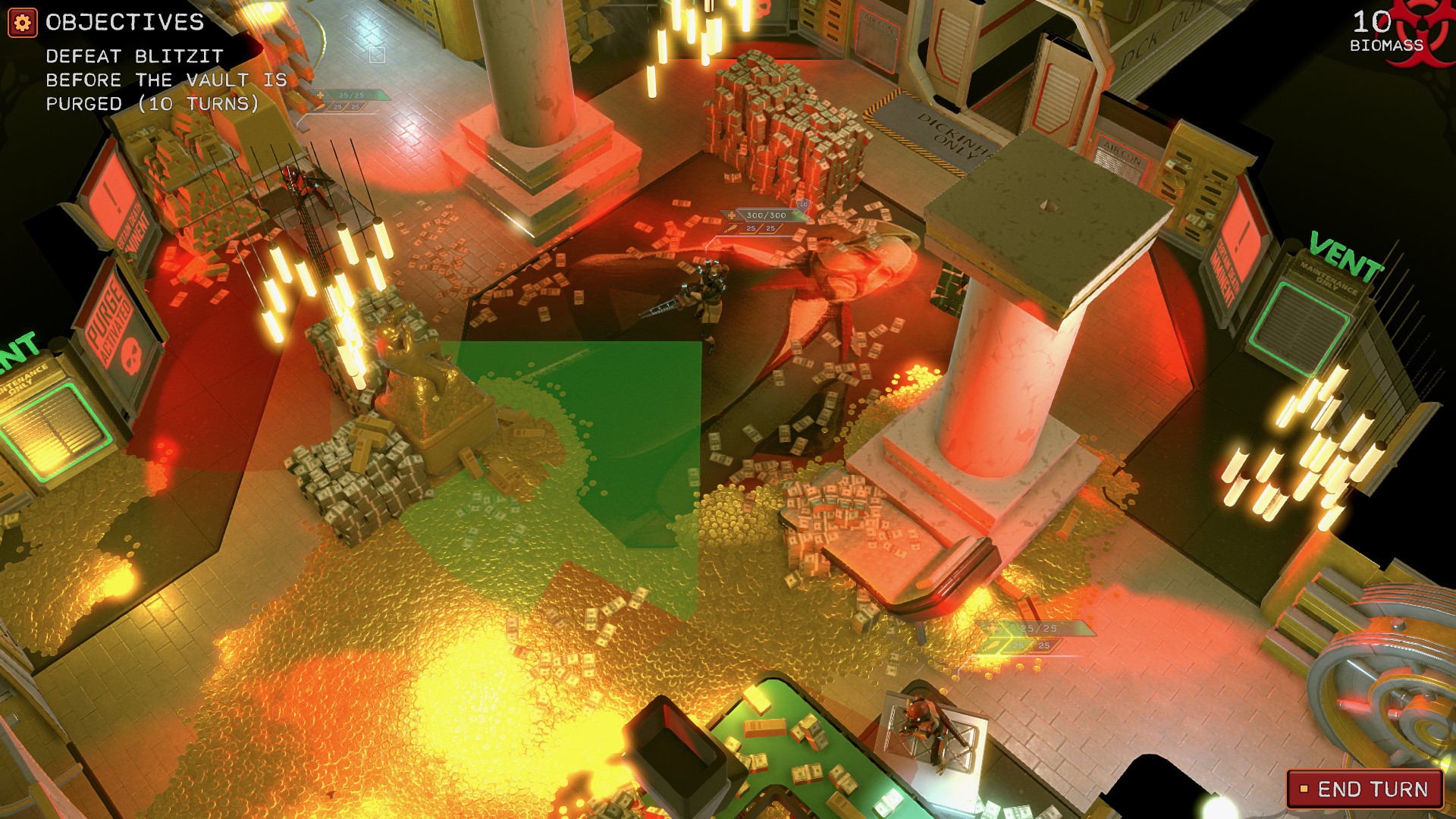 Sound-wise, the music is quirky and spooky, as mentioned. Sound effects are great, with grunts, screams, squishy noises, and various weapons, though they do sound a bit isolated in cases, as if they were recorded separately and then pasted in (which is of course exactly what was done). The game is only partially voiced, with Pecker in particular warranting a mention — he’s brilliant — but much of the script from other characters is only text, with grunting noises over the top. That said, it’s still nicely done. 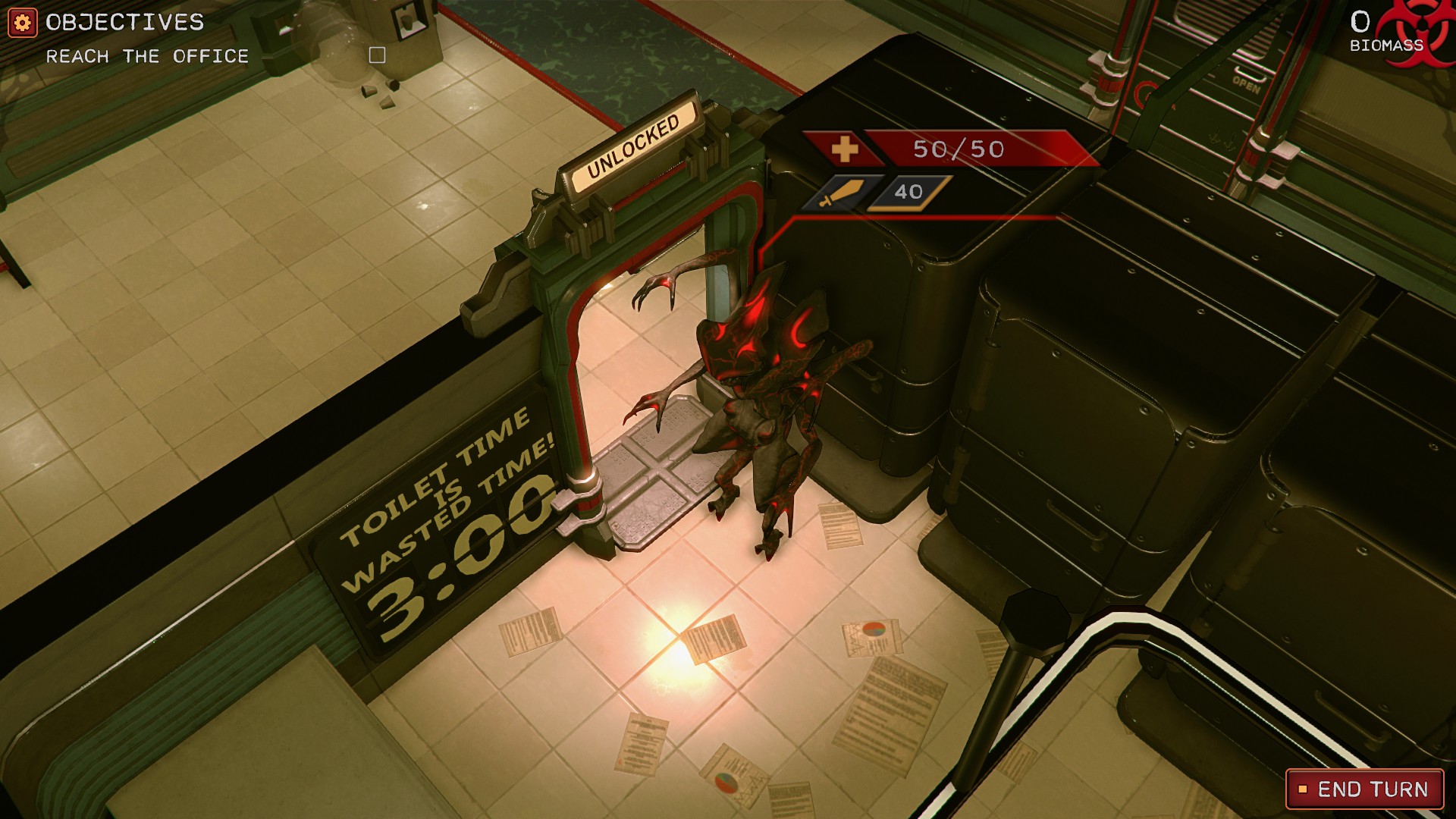 There are plenty of display options so if you have any problems running with everything turned up to full there’s lots of room to optimise performance. I didn’t have any issues running everything at maximum at 1920×1080 on a GTX 1070.

Attack of the Earthlings is a turn-based strategy game; it could be called ‘squad-based’, though your ‘squad’ on each level here comprises a single alien who can spawn others as she consumes biomass from fallen humans. Even so, the game basics are roughly the same as most other games in the genre: each of your troops has a number of points to spend on moving, attacking, and using special abilities, which you do in whatever order you desire. Once you’ve taken all actions for your troops you end the turn and play cycles to the enemy’s turn. Line of sight, overwatch, fog of war, … all the usual squad-based TBS components are present here and function essentially as you’d expect. 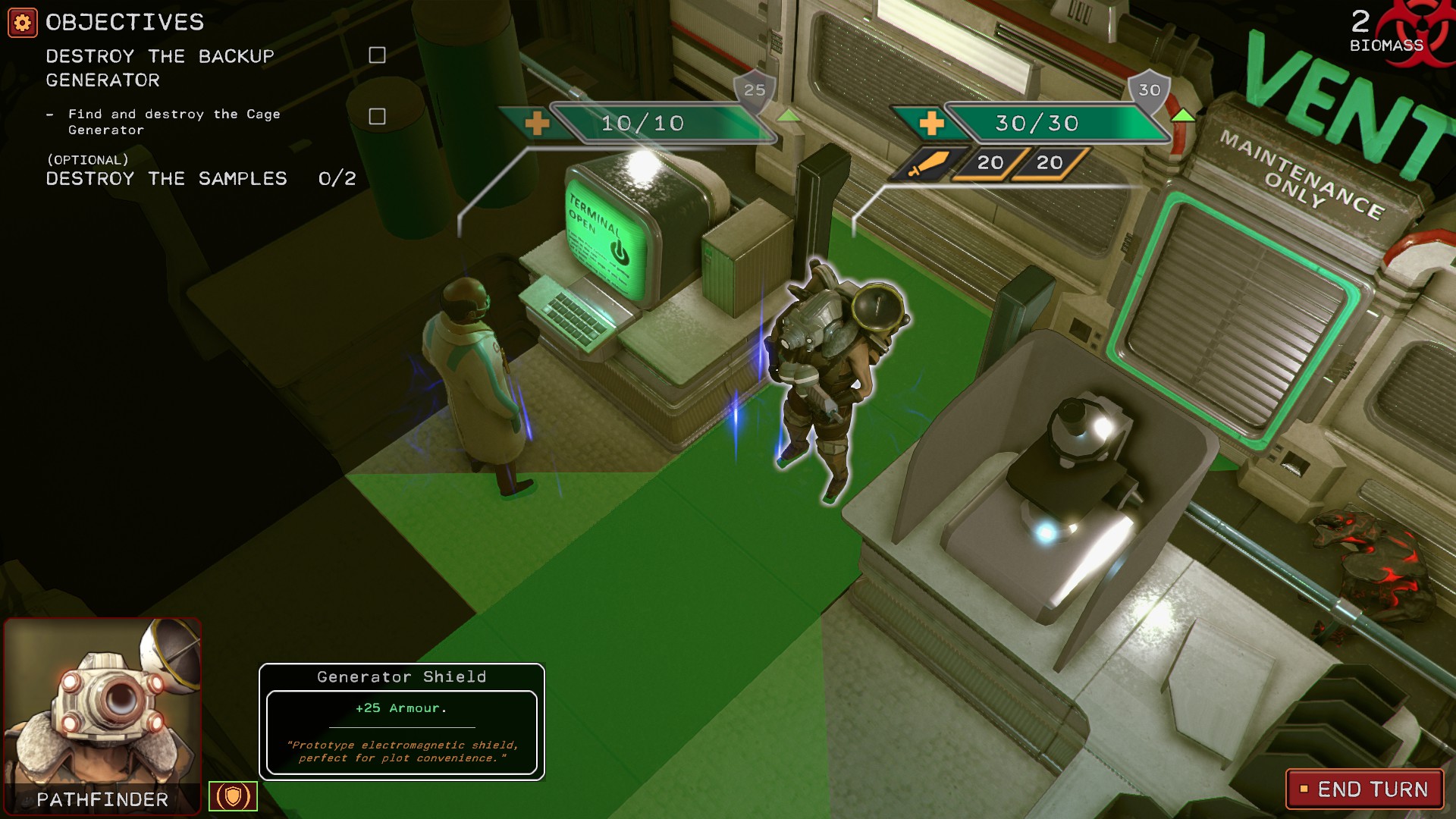 Apart from using biomass to create new ‘grunts’, the game also offers a few extensions to the tried-and-true formula. First, you can also use biomass to upgrade your grunts to one of the three upgradeable types: ranged, stealth, or tank. Each has its own special abilities. Attacking an enemy — or even encountering a human or opening a door — can produce noise that will alert other humans, prompting them to investigate. And, for taking out powerful enemies, you can synchronise attacks among multiple troops, potentially allowing you to prevent counter attacks. It’s unfortunately that this only works on basic attacks, though; you can’t synchronise special abilities, which reduces your tactical options significantly.

Once you enter the game proper, it offers you a brief tutorial level that allows for a couple of jokes and provides instruction in the game’s basic controls and gameplay rules; for anyone familiar with the genre, there’s not much to surprise you here. It’s all implemented well, though — well, mostly; pathing can be a bit stupid — and the generous dose of humour helps to keep the game interesting. 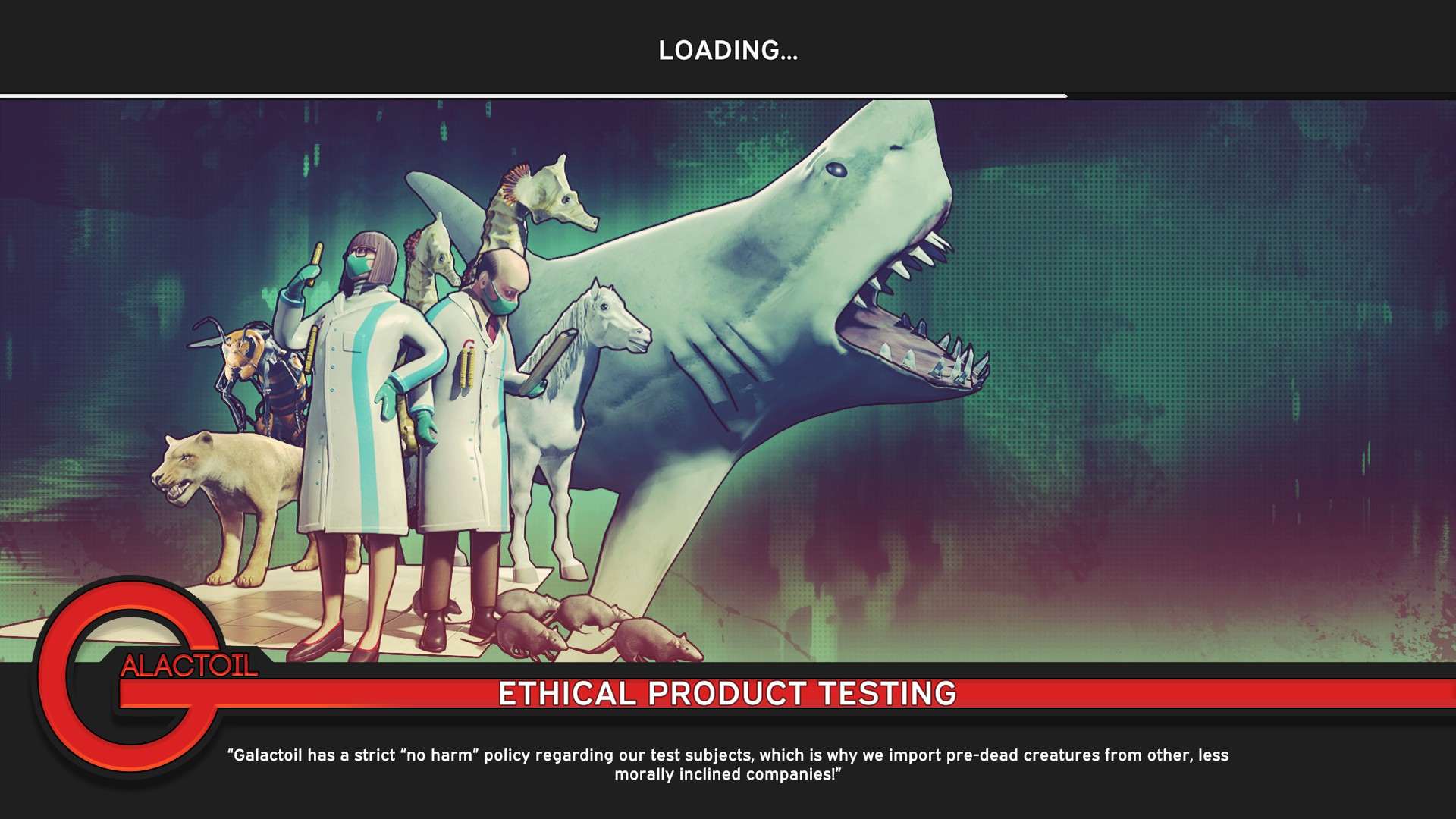 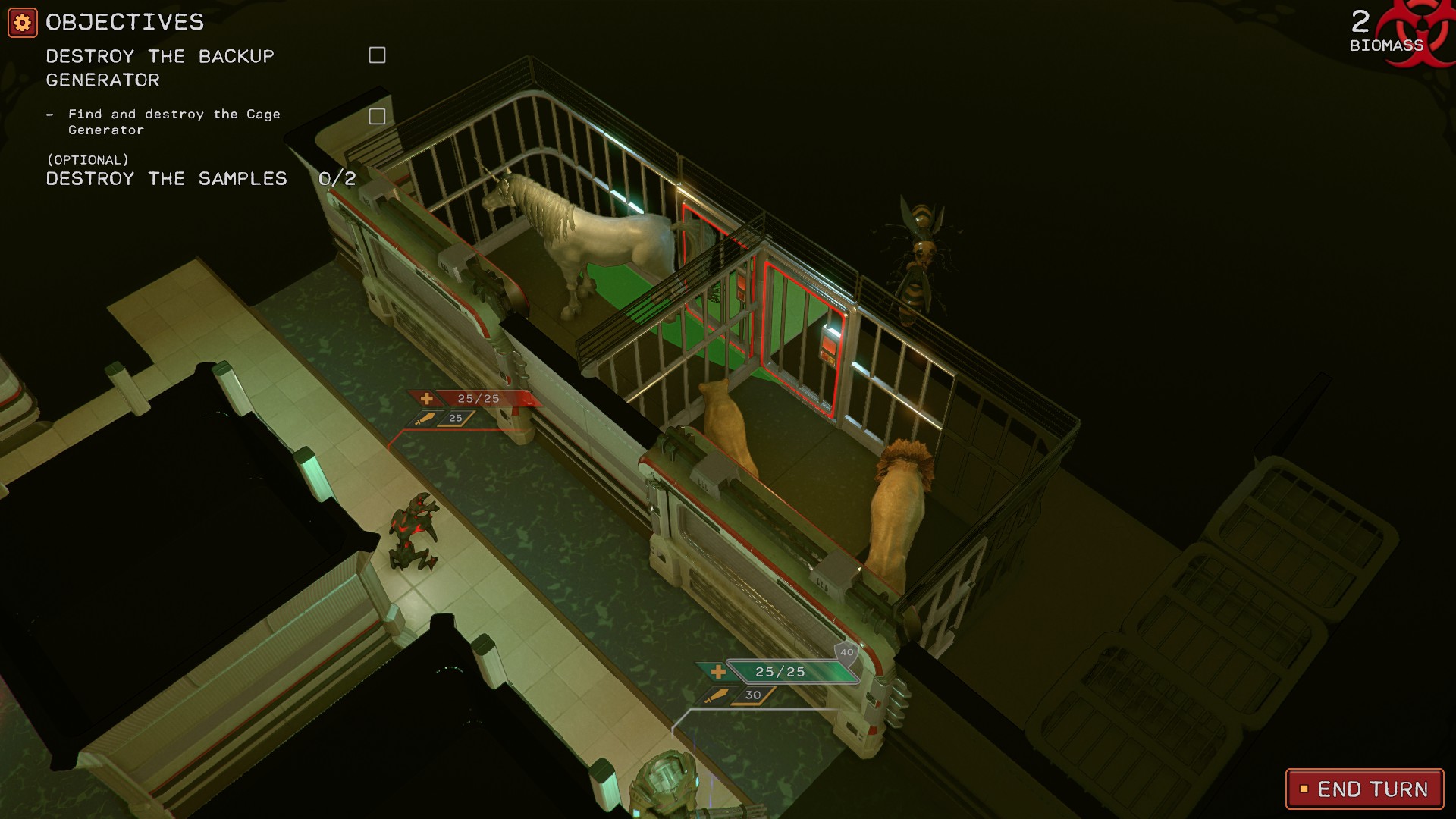 There are seven core levels in the Galactoil ship, from the drills up to the board room. After the first couple you’ll have encountered all the basic enemy types and will have all of your troops available (once you collect enough biomass), so after that it’s mostly just using the same tactics over again on different maps. Each level starts you off with just the Matriarch, no matter how many units you had left on the previous one. Performance is awarded with mutagen, which you spend on troop upgrades. While I love that you can respec, it does limit replayability a bit, since you can see everything in one play. 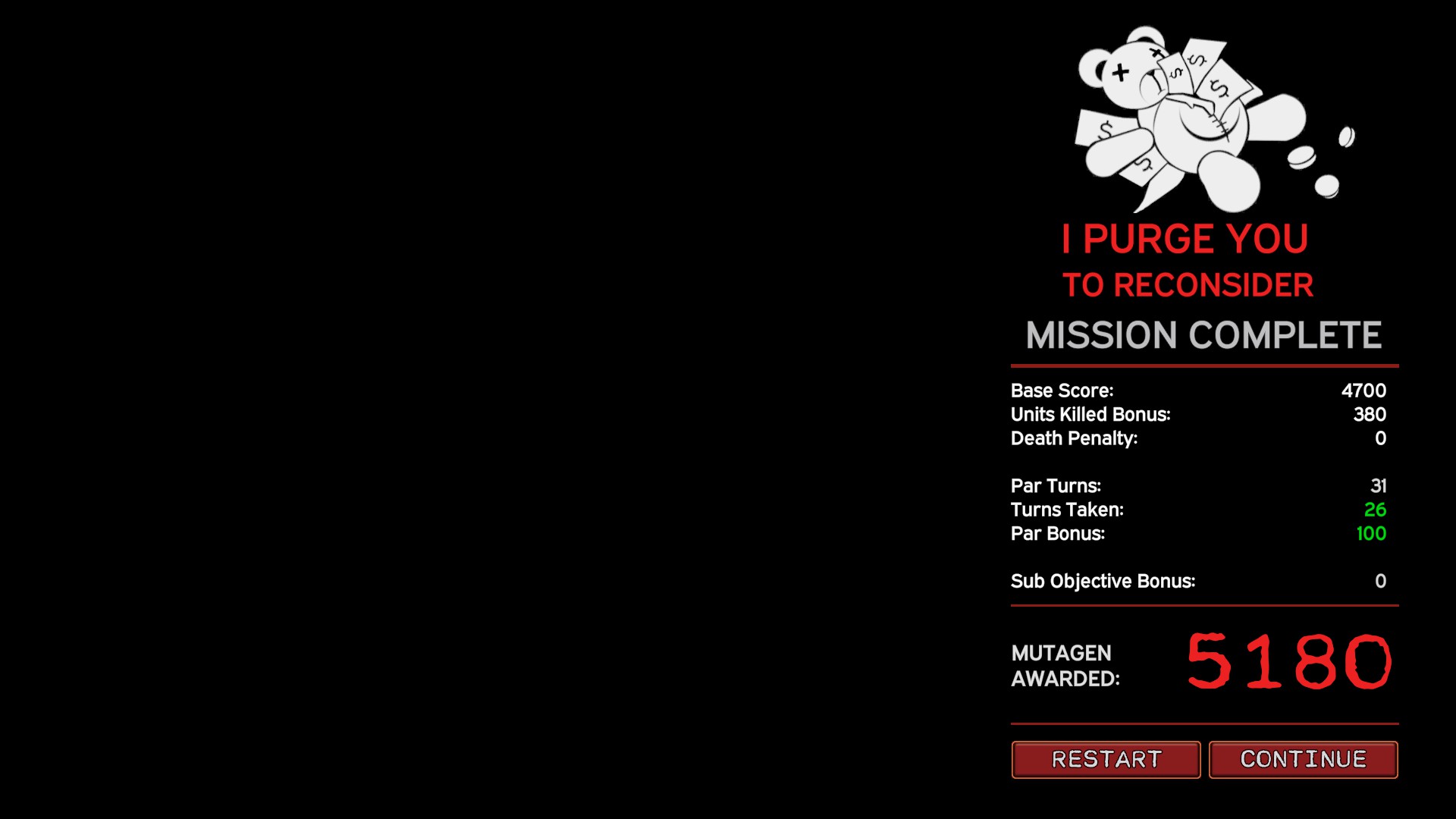 There are a few little niggles here and there. First, there’s no map, making some of the larger levels a bit of a pain to navigate. It’s not a glaring omission — the initial fog of war is replaced by a slightly darkened rendering of the main walls and room layout of the area once you pass out of sight — but it still would have been nice to have. I also had one crash, but it was only on exiting to desktop, so really it didn’t matter at all.

I think the game’s biggest weakness is its limited lifespan. With only seven levels and five troop types (four of which are upgradeable with three upgrades each), unless you’re an achievement hunter you’re unlikely to get more than 10 hours’ play out of the game. The game tries to mix it up a bit with time/turn limits on some levels, some repetition required to learn guard routes and best paths, and a few unique enemies, which make sense in plot terms, but don’t really work that well in game.

Attack of the Earthlings is a fun distraction, but it begins to become a bit of a chore as you progress. I didn’t enjoy the second-to-last level at all, and now that I’m on the final level I just don’t think I can be bothered playing. I’ll leave it installed and will probably get around to it one of these days, but on such a short game it’s a bit disappointing.

The core mechanics are fun and the humour is great. Production values are high and the game is well balanced. But there’s just not enough variation; once you get to about level four you’ve seen almost all that the game has to offer, and what you haven’t seen are most of the frustrating bits.

If you’re a fan of turn-based, squad-based strategy, then pick it up for a bit of fun. Just don’t expect too much.