Aer Memories of Old, developed by Forgotten Key and published by Daedalic Entertainment, is an open world adventure where you can quickly transform into a bird and travel between islands floating in the sky where hidden sanctuary temples lay ready to be explored. It’s a very laid back adventure and has some nice visuals, but how does it hold up for the adventure gamers that make up the primary fanbase of the Daedalic community? Let’s find out.

I bet you’ve been itching to fly in Aer Memories of Old.  You’re reading this, so did the intro trailer catch your eye? I mean, c’mon, who doesn’t wanna dive from a ledge and fly away?  You get to transform into a bird like Manimal ( google it up.  Man+Animal = Manimal! ), and soar through some digital clouds without a care in the world.  And, you know, the game does it pretty well once the clouds break past you in a fluff of white and pink polygons.  You also get these cool hairbuns that sort of look like styofoam cups on your head with full motion physics that bob up and down.  It’s a pretty sweet setup. 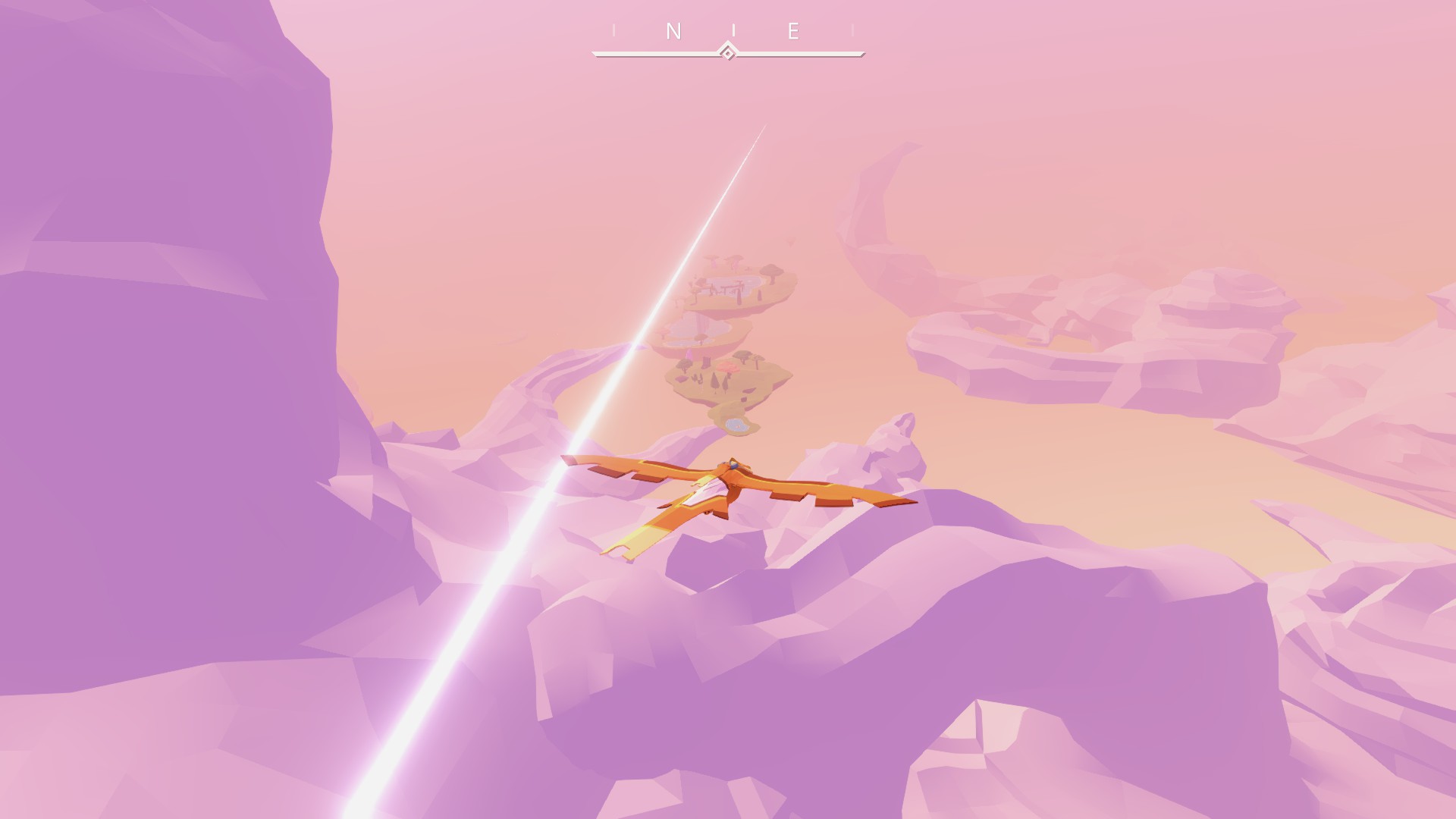 The story begins by taking on the character of a  young girl named Aer who, after visiting the shrine of Karah on her pilgrimage, is imbued with the power to transform into a bird and given a sacred lantern which reveals old ghostly memories and unlocks secret panels.  Aer’s main storyline follows a search to discover why a threatening evil has become powerful and visit the temples and sanctuaries of the old gods to look for a solution to bring peace to the world once again.

In the process, Aer’s journey mostly brings the history and religion of this world to light.  You’ll learn of their deities and the wars that raged on ages in the past by viewing tablets and printed materials scattered throughout the region.  The rest of the story has encounters with these deities and mostly informational dialogue.

Aer really rides the fine line of exploratory walking/flying simulator and adventure puzzle platformer.  The gentle soundtrack and the pleasant polygonal graphics take center stage rather than any challenging puzzles or character conversations, although there is a large amount of religious backstory in every location.  While there are some characters to interact with, even animal deities, they only talk to you rather than allow you to join in on the conversation.  So, the game really excludes any personal conversation choices for yourself.  You are just along for the ride.   In my opinion, it mostly feels like a walking/flying sim until you get to the last section of the game where there are some minor puzzles involved.  Still, these are mostly simple and rely on exploring the area until you run out of options for how to proceed.  It’s nothing too frustrating except for one area near the end that was blocked off with some shattered glass that I had no idea how to get to until I found a hidden area after a long search.

Adventure gamers may get bored if expecting some challenge here.  Instead, this should be a game for just relaxing and enjoying the game world.  There are no enemies to escape or dangerous areas.  Even if you fall from up high, Aer simply comes to a gentle floating stop as if she were a daffodil blowing in the wind. 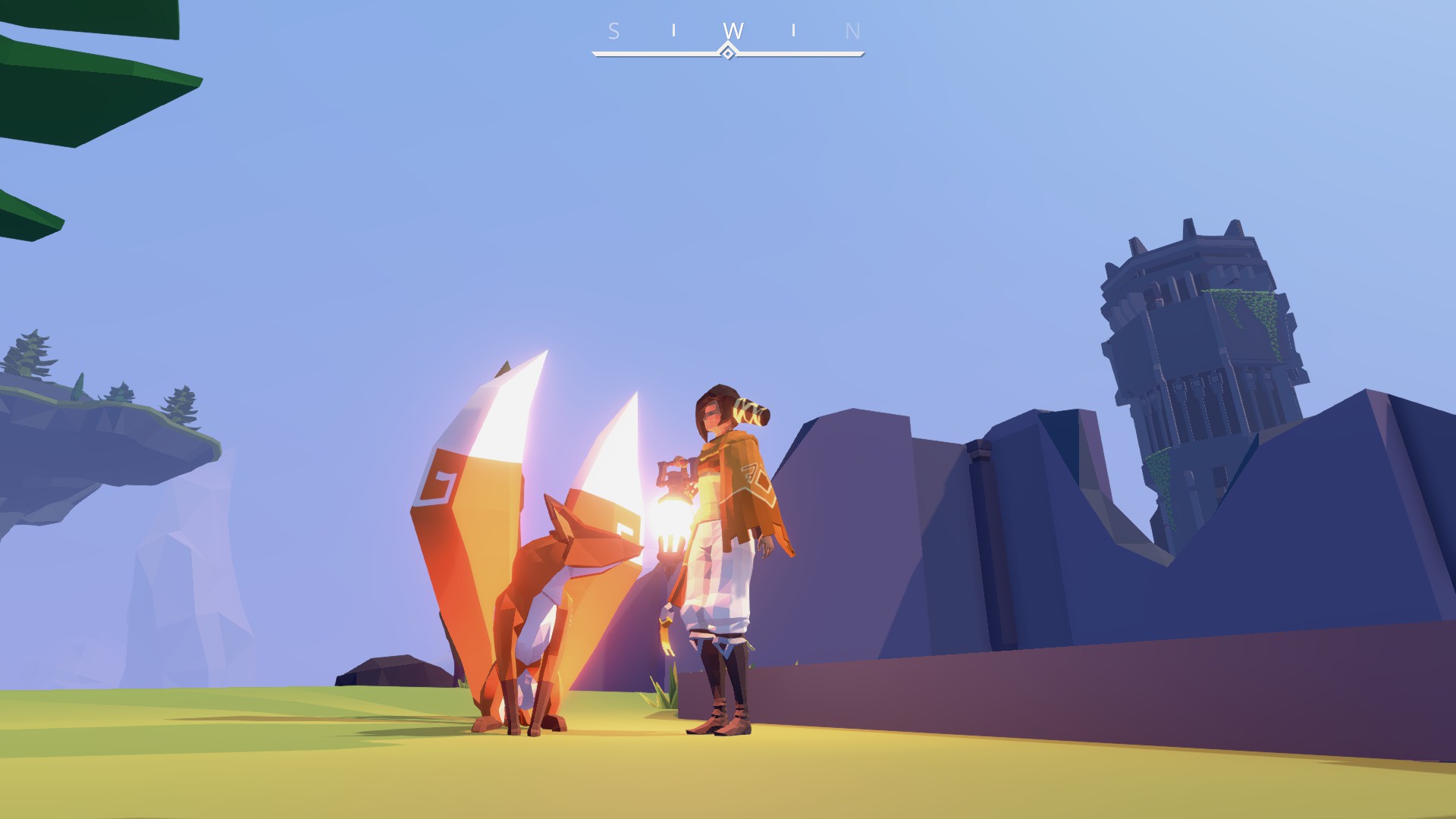 For the majority of the story, you’ll be transforming into a bird and flying from location to location.  This sounds nice and all, but there are no quest logs or a real time minimap.  You only have a compass and a freeze-frame map to look at.  This was okay at first, but after I quit one night and resumed a few days later I simply could not remember where I needed to head out to and with only one autosave, I had to look up a walkthrough to figure out where I was supposed to go again.  A simple quest log would be very helpful.

Once you fly to a location, you’ll have to search out what you are there for.  That leads to visiting several floating islands in a hit or miss method.  The first location has some shining beacons to guide you, but after that you are on your own.  Generally, I’d search three or four areas that looked previously inhabited, discover some history from the ruins, and then wait until I lucked out unlocking the sanctuary.  If you are the type that likes to know what comes next in a quest, you may want to think twice about getting Aer.  The exploratory nature of the game means that the gameplay generally meanders with hidden clues and areas.  You won’t be guided anywhere other than a direction and the use of your compass.  This was okay with me for awhile, but as time went on I got a little frustrated not knowing where to go or what to do to progress. If you do get lost, there is a Settlement area that provides some hints on where to go.  They are not detailed hints, but general ideas nonetheless. 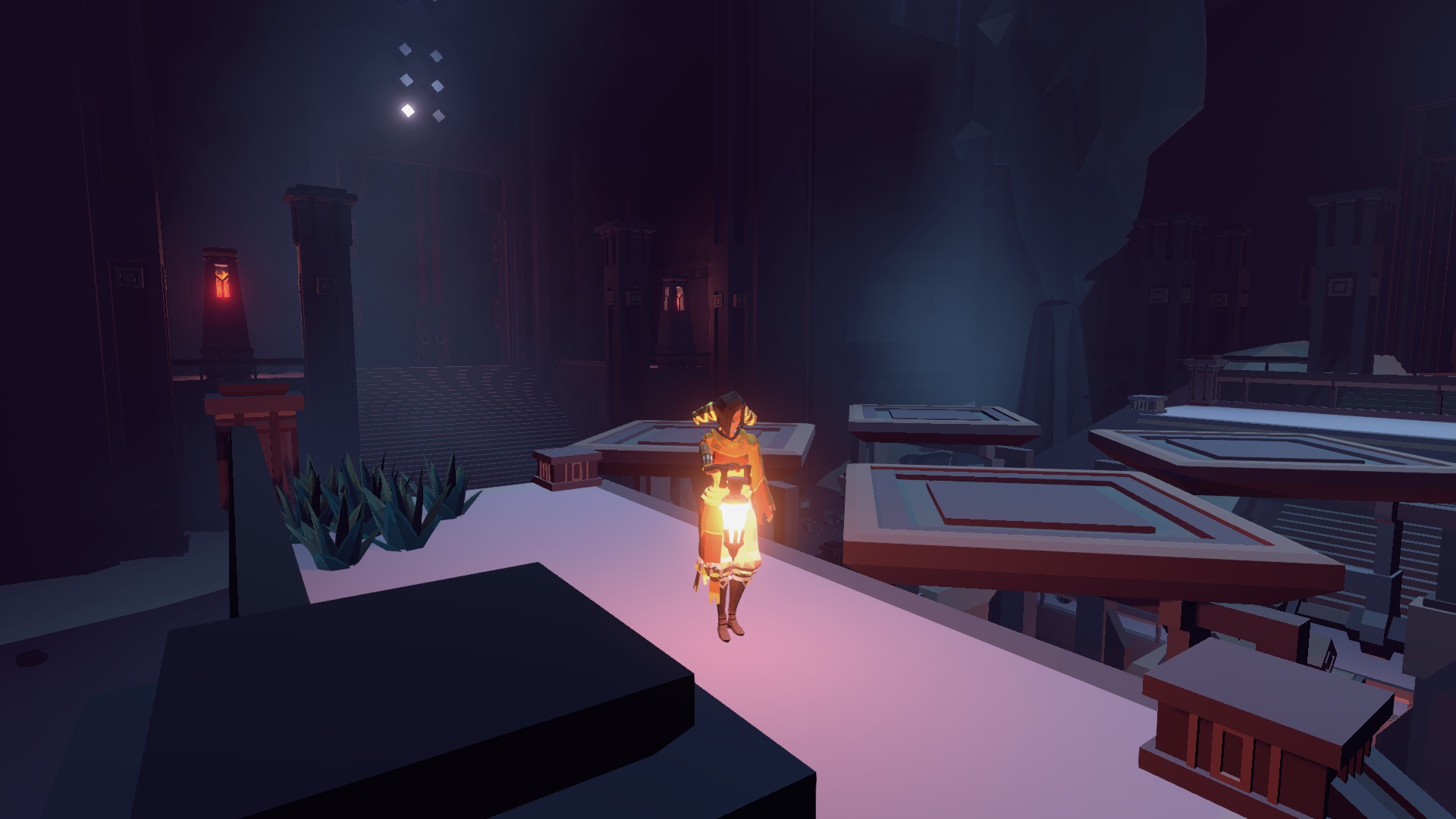 Once inside a sanctuary temple, the puzzle platforming begins.  This is more along the lines of exploring until you find a glowing square and activate it to unlock a new area.  It’s similar to dungeon crawling in say Zelda Twilight Princess except for the lack of enemies, hazards, bosses, or treasures.

Along the way, you learn about the religious activities and stories of the gods.  It’s a bit similar to reading Greek mythology.  So, look at some tablets, read a scroll, jump all over the place, activate a square switch, find a key, and on to the next area.  There is no climbing or interacting with objects other than the squares and a few switches.  That’s why I tend to lean towards classifying this game more as a walking sim rather than a puzzle adventure game.  Puzzles are exploration based with the occasional pattern to figure out.  It’s significantly less challenging than anything else I’ve played with Daedalic and I think it’s more of a foray into casual games than anything else in their catalog.  In fact, I feel Aer would be perfectly fine as a mobile game.  Aer just feels less like something I’d play on my PC and more like a game I’d play on my phone while on a train or something.  Don’t get me wrong, the laid back feel to the game is nice.  It’s just that with all the other open world games on PC, which are substantially more interactive, the exploratory gameplay can drag on a bit too long to simply be flying and looking around for hours on end. 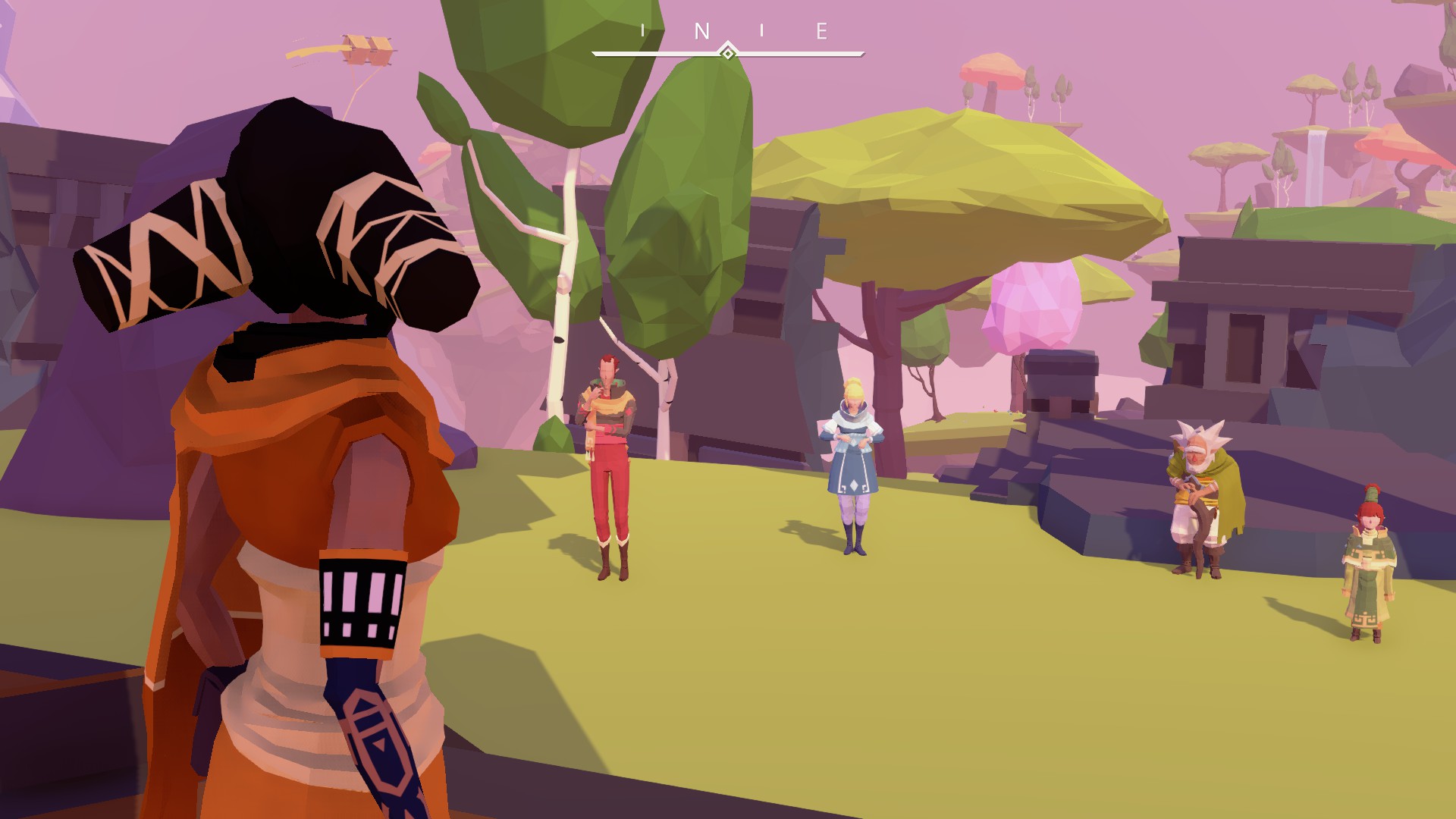 The art direction in Aer is wonderfully designed.  There is attention to color space, animal interactions with some basic AI, shading, color temperature, and perspective that you may not find in other games.  It’s a fantastic polygon art style that literally breathes life into the game.  I honestly don’t think the game would be anywhere near as interesting if it were not for the work of the artists and colorists who put in what looks like a tremendous amount of work.  Every locale has it’s own feel, and moving from a sunny area to a snowy area is done in a very subtle and gradual transition.  I can’t say enough about the design and graphic quality.

Sonically, the game does not falter either.  Every time you fly to a new place, the music changes to a new composition that befits the scenery.  Even when you transform from a bird to a human, the music changes with you.  While not as critical as the graphics, in my opinion, the music knows when to hit the right tone and flavor of the moment. The sound effects also do a good job of notifying a changes in the gameplay at the right time. 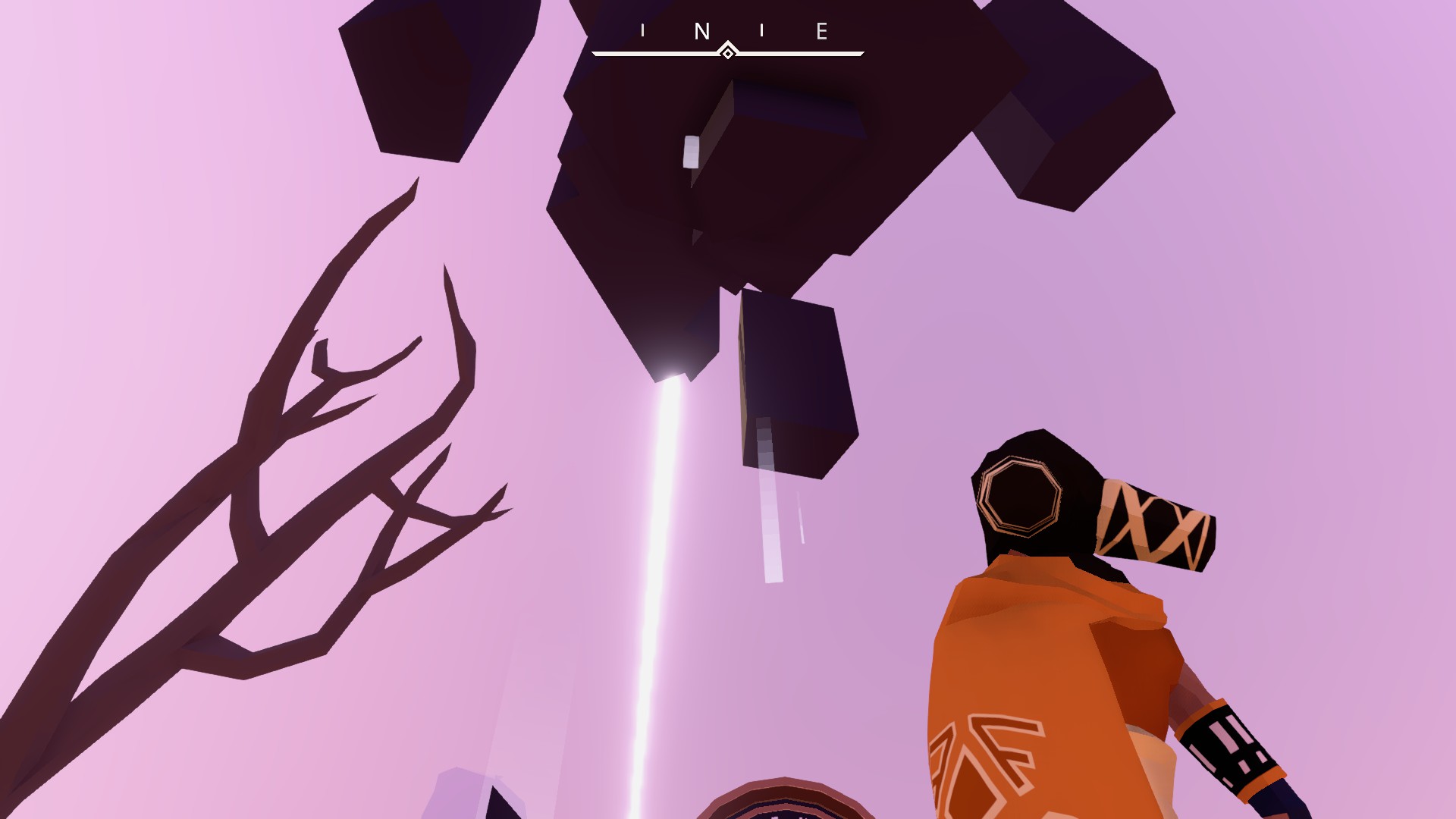 If you are looking for a game world that mostly meanders, this is a good game choice.  The exploratory nature of having to look around to discover the next unlockable area pretty much requires some patience and zen.  On the other hand, if you don’t like walking sims or games without any action or lack of direction, I’d stay clear away from Aer.  For every area I went, I was only given a direction and general idea.  Once there, you honestly have no idea what to do or where to go.  Exploration is the only option, meaning there will be time spent not knowing where to go and not knowing what eactly needs to be done next.  The open world is beautiful and relaxing, making the bird flight portion of the game a very nice departure from other open worlds even if it takes some practice to fly well.  Once you unlock a sanctuary, things are more structured.  However, don’t expect complex puzzles or combining objects of any sort.  Adventure gamers may be disappointed.  It’s still going to be exploration based, even down in the depths of multilayered levels.  Aer Memories of Old is a ride on the wings of a bird. It is carefree and wandering, and that’s how you should go in if playing this game.