A new town, a new job, what can go wrong?

Moving from a town you’ve lived in and known to one that is totally new is stressful.  You give up a certain degree of familiarity and community when leaving a place.  How will the new town be? Will the residents be friendly? Perhaps you are simply moving due to work and just need to travel there.  Maybe the town is great or has a dark secret, the new guy will never know.

Boy oh boy, does Little Vale have a secret of its own.   It’s a sweet town on the outside, but a sinister plan is brewing underneath. You come to this small town as their new postman with friendly faces greeting you as you first meet the residents and start delivering their mail.   Once the day ends, you spend the night at the local hotel. Hopefully, your dreams are pleasant and not nightmarish.  However, what if they are so real that it is questionable whether they are dreams at all. 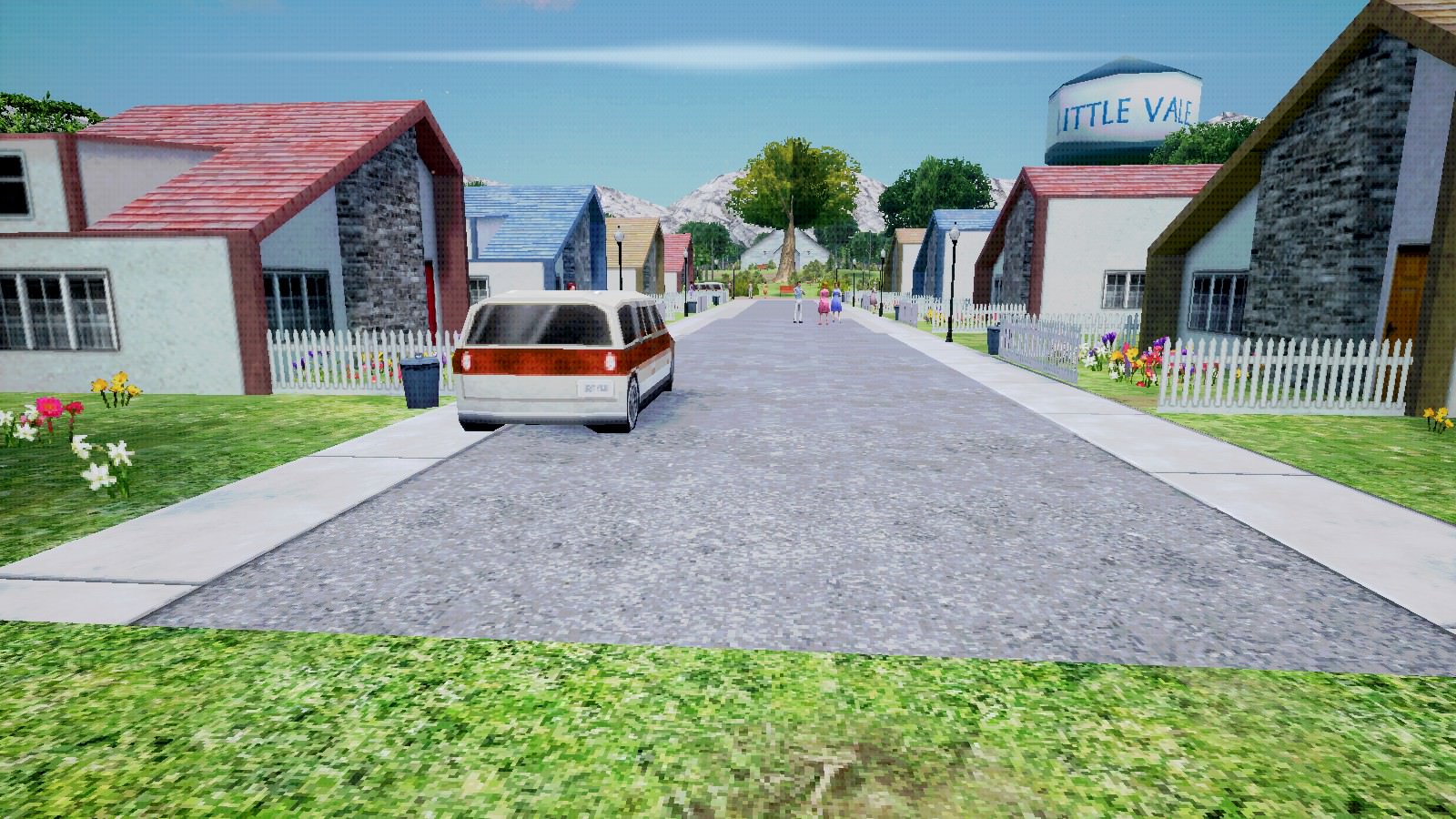 A good amount of games purposely leave their story vague. Whether or not it helps the game is up to how it is executed. While Helltown does feel like it could use more, it does work with what it has in place fairly well.  It straddles the line between being confused and knowing what exactly is going to happen next, leaving a nice aura of mystery. There’s enough information given to make you intrigued throughout while keeping what really is going on hidden, even when everything is being thrown at you. The multiple endings even go in deeper into the story if you manage to figure out how to trigger them. 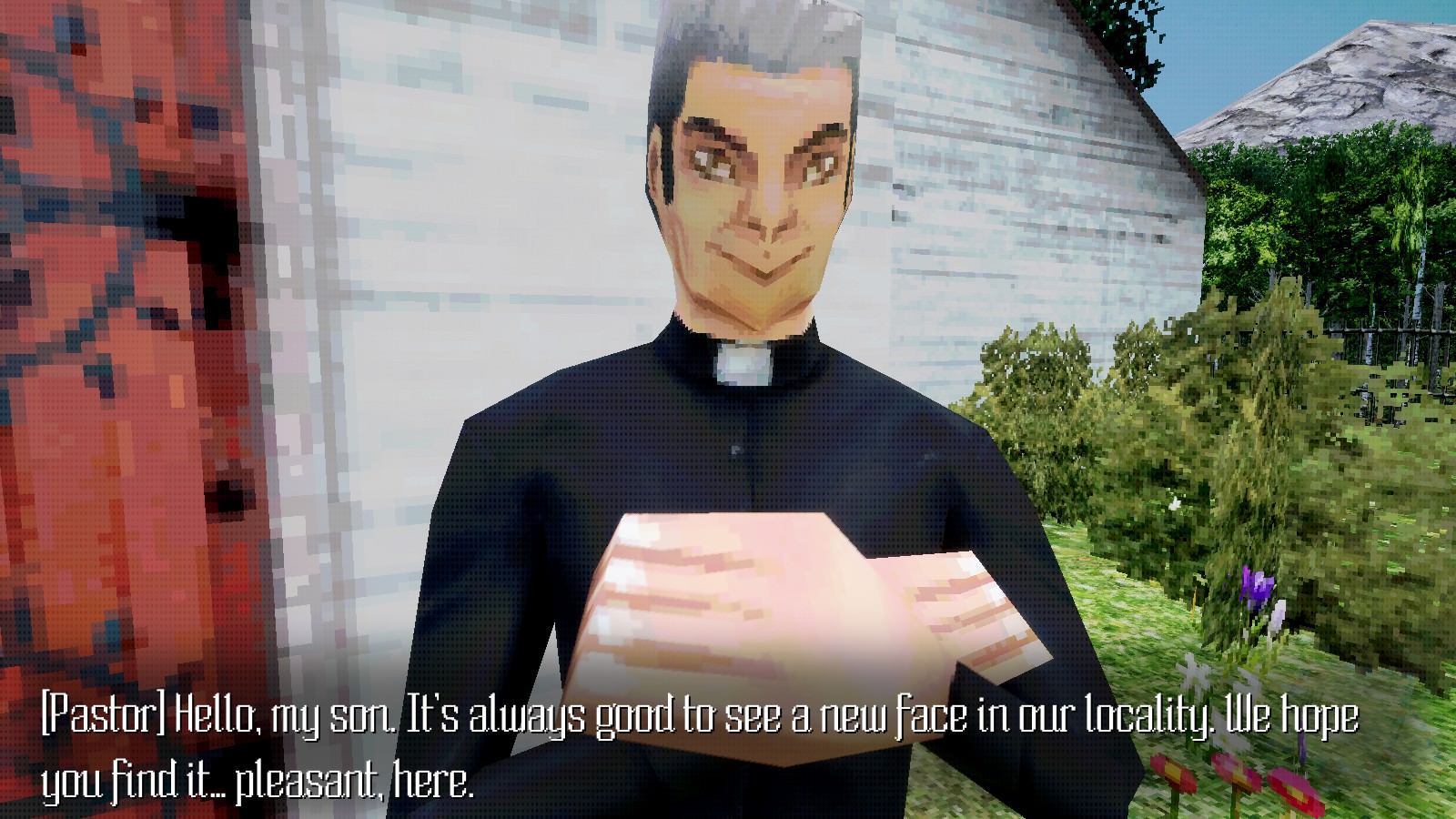 For horror fans, this title will be refreshing. With jumpscares being a common staple in both horror games and movies, we almost expect them with every other scene now. With Helltown though, no matter what it looks like, I am happy to say that jumpscares are not relied on to scare players. The atmosphere becomes a huge part of it as Little Vale gets creepier every day. The ambient music screams horror as it crawls into your mind when you get to specific areas. The enemies hunting you down have their own sounds while the music will play on cue if they spot you, informing you that you are being chased.   Almost all of them act the same, but evading them is simple: learn their pattern and go around it.

While there are some that do look different, I’m glad to only have to worry about remembering their patrols. This makes the occurrence of player deaths almost entirely due to player error. However, there was one that I’m not sure if it is a bug or not; the lady in red did not stop chasing me no matter how far I went. The others will stop after going out of their area, but the lady in red did not.  Either way, these enemies did cause some great game tension with close calls. There will inevitably be moments where they will get annoying, but for the most part they are good.

There is a decent amount of replayability here. Once you are done with the first playthrough and understand what is around you and where things are, some of the mysterious items reveal themselves to you during subsequent plays.  The other two endings play on that. One has you collect papers you may have come across in your original playthrough and the other has you touch a stone to fall down a well. The latter can be found by going for an achievement that has the same mechanic to unlock it, or perhaps just by being extra curious. There is one achievement that is rage inducing as the progress is reset upon death and there is no obvious progress bar for it. 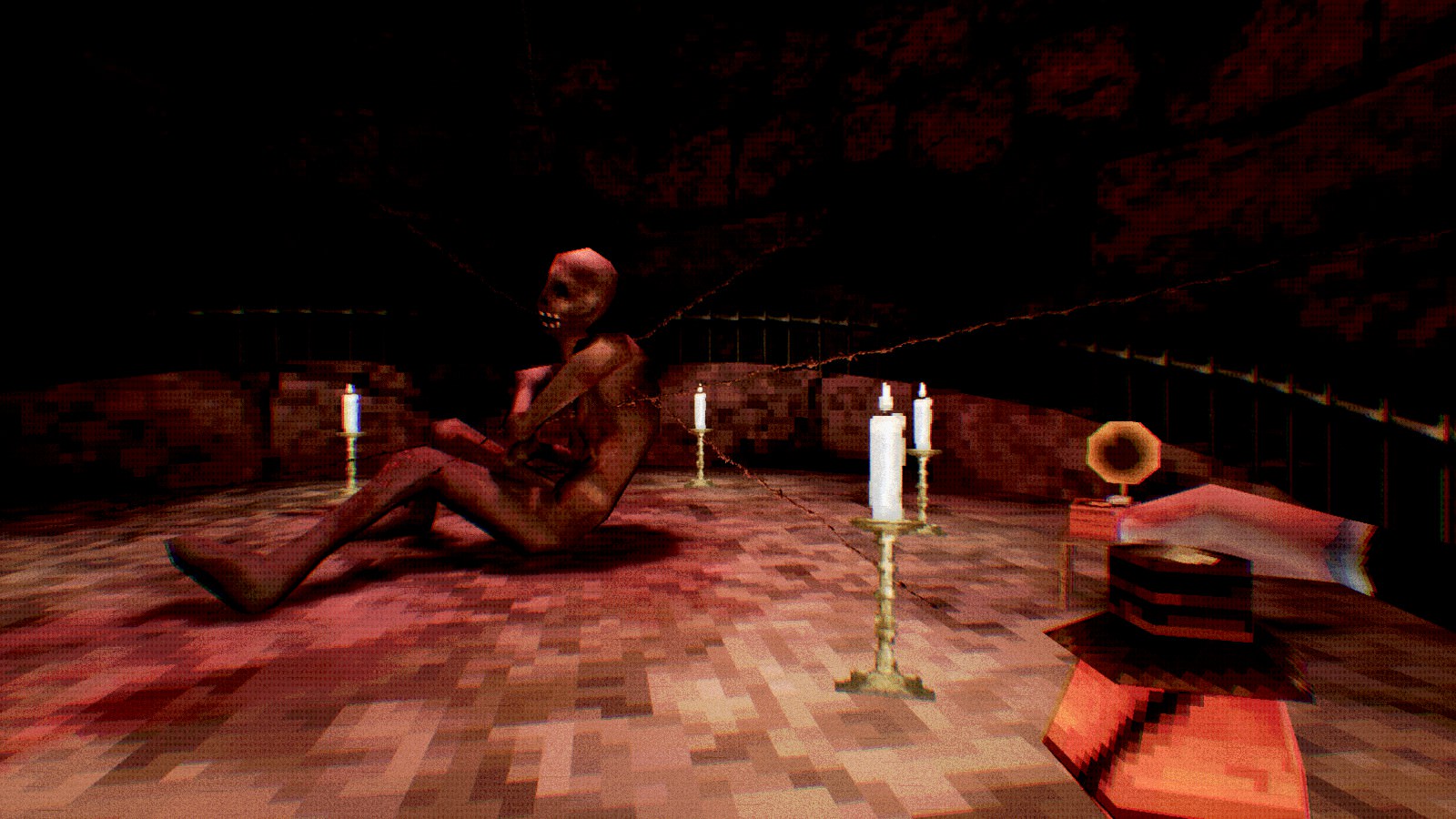 The one thing that could have made Helltown a better game would have been if there was more story and some expanded scenes in the beginning before it ramped up. That would allow it to build up more gradually, making it more tense as you realize that if someone mysteriously disappeared in the town then you could too. It would also be nice to showcase how the town is getting creepier as the game moves forward and the nightmares become scarier and more suspicious. While Helltown does this, it is in a more condensed manner.  I do get why, as delivering the mail can be seen as filler, as well as the replayability hurdle with having to replay more days to get to the part you need to be at.  However, doing this could also become detrimental to the story as it is purposely more vague than detailed. Adding more days could ruin that balance.

I really love the aesthetic this game goes for as it looks like it could have come from the Playstation 1 era. This style is used to their advantage as it was not until the ending that I began to realize the subtle hint one of the enemy types gives to the story.  There is more evidence to back it up during one of the alternate routes.  Small details become interesting when you understand how they played them up.  One of the best looking scenes is in one of the alternate endings, and it is worth it.  The visuals could not have been any better than the way it is done already. 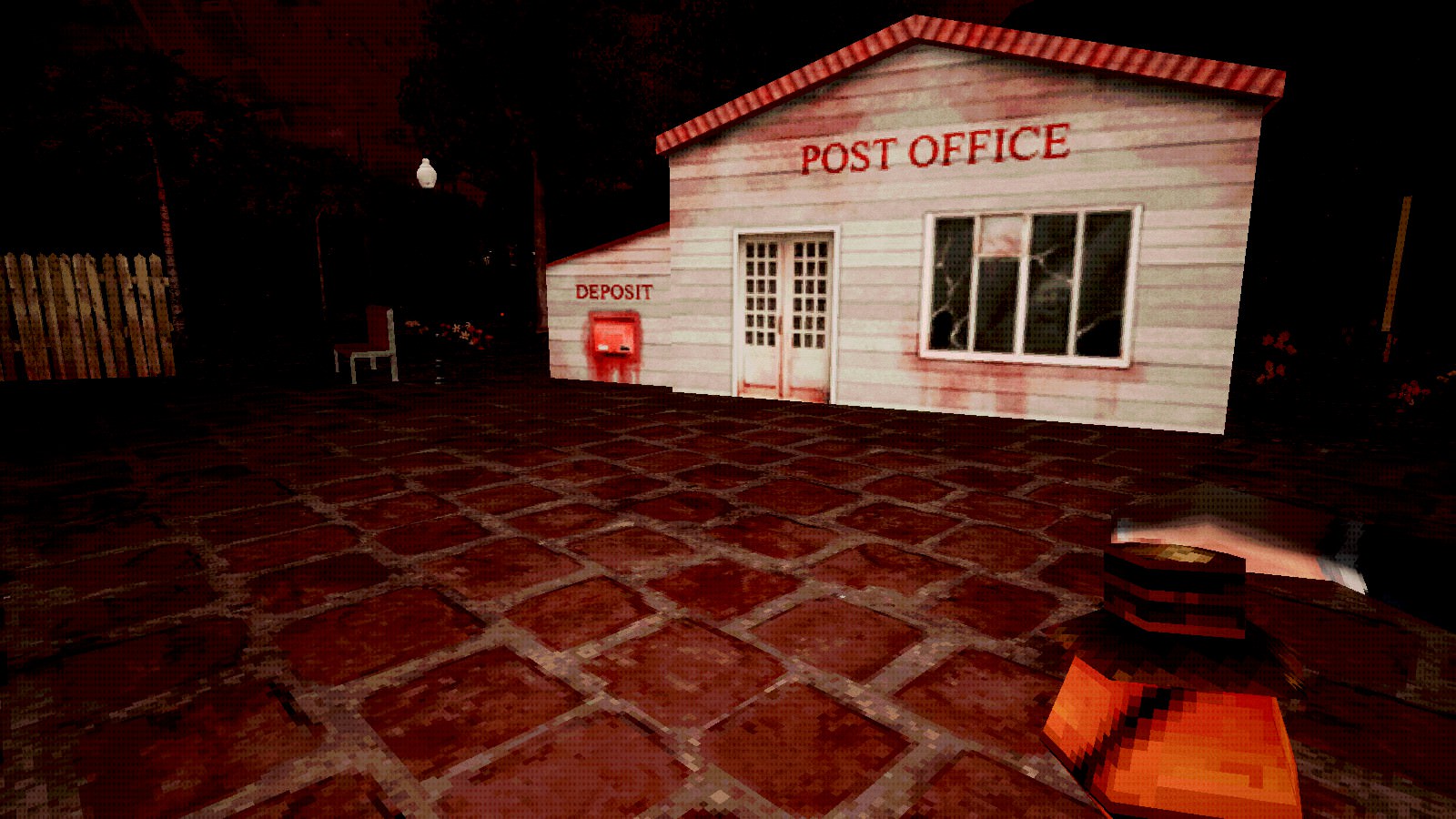 Helltown is a breath of fresh air in the era of jumpscare horror games. This would have easily been a contender for jumpscares, but luckily it does not. While it does have a few rough spots, such as possibly making the town part longer to make the change more gradual, it does have a lot to love. Don’t let the looks dictate whether or not this is a keeper.  If you like the story premise or just want to play a good horror game, try it out. I hope you like it as much as I did.

On this note, don’t worry about not being able to pet the cute dog, there is an even more satisfying outcome if you care to look for the hidden secret. 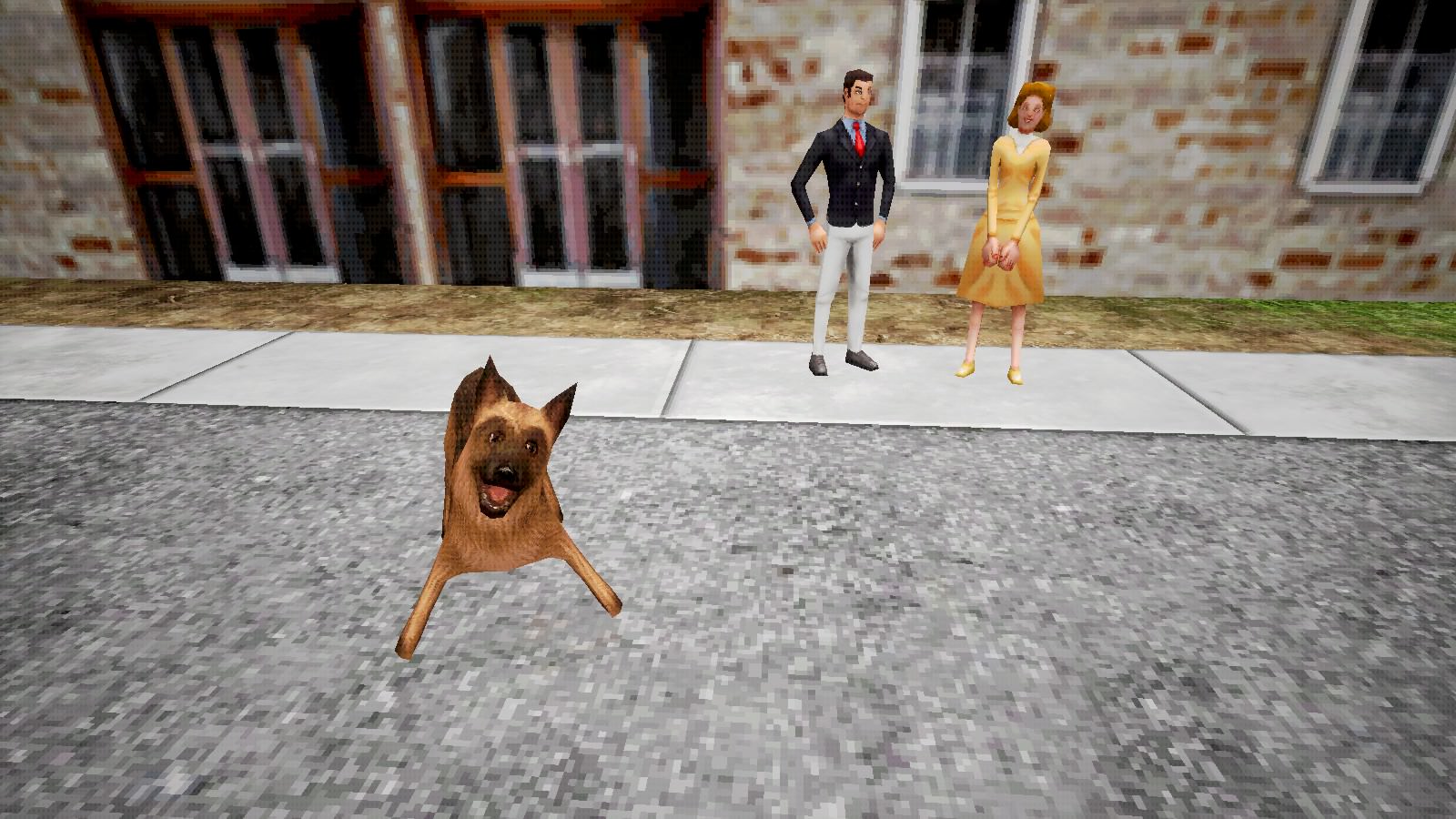