Hegis’ Grasp is a mediocre survival horror game lacking in several critical features.  It is not worth the price tag and should really go back into Early Access.

Hegis’ Grasp is a survival horror adventure game, where you will be impersonating a military officer tasked to investigate mysterious happenings and disappearances near the remote village of Hegis. Your platoon, led by the General, goes in and sets up in the area. Soon after, strange and dangerous villagers start attacking everyone, including yourself. Cut off from your unit and alone in this dark place, you have to find your way through this madness and survive.

General Gameplay
The gameplay of Hegis’ Grasp uses a very basic survival horror experience with very limited exploration and approximated combat. There is a limited variety of healing items and weapons to find (Toolbox, Machete, Hatchet, Pitchfork, Torch, Tincture, Large Tincture, Adrenaline, Dynamite, Mauser Pistol, Double Barrel Shotgun, Magnum Revolver) and that’s it. These are all the items in this entire game.

The environment is littered with invisible barriers impeding exploration off the beaten path. The tasks required are always a quest to find keys to unlock certain doors to find other keys to unlock the gate to proceed to the next chapter. One time you are tasked to find something different, but that also involves finding keys. Basically, you will be doing two things: running around avoiding enemies, since killing them is useless because they resurrect in stronger mutated versions, or shooting the rare non-resurrecting enemies such as wolves.

The game features a basic inventory management, a stamina system, and little else. There are no combat mechanics apart from staggering enemies until they die only to resurrect a bit later. There is Headshot as far as I can tell, but ammo is rare. The world is small and empty, filled only with bushes and mostly empty ruined structures, some notes and items are randomly scattered around just to be taken. It really feels like a world just put up hastily and without any attention to detail.

The atmosphere, which is a crucial part of the survival horror experience, is ruined by awful graphics and shaders, lens flares the size of tiny suns, a horrible white outline on distant objects (result of poorly made distance fog), ridiculous animations especially in third person, enemies going straight through walls, and really choppy and clunky cutscenes. 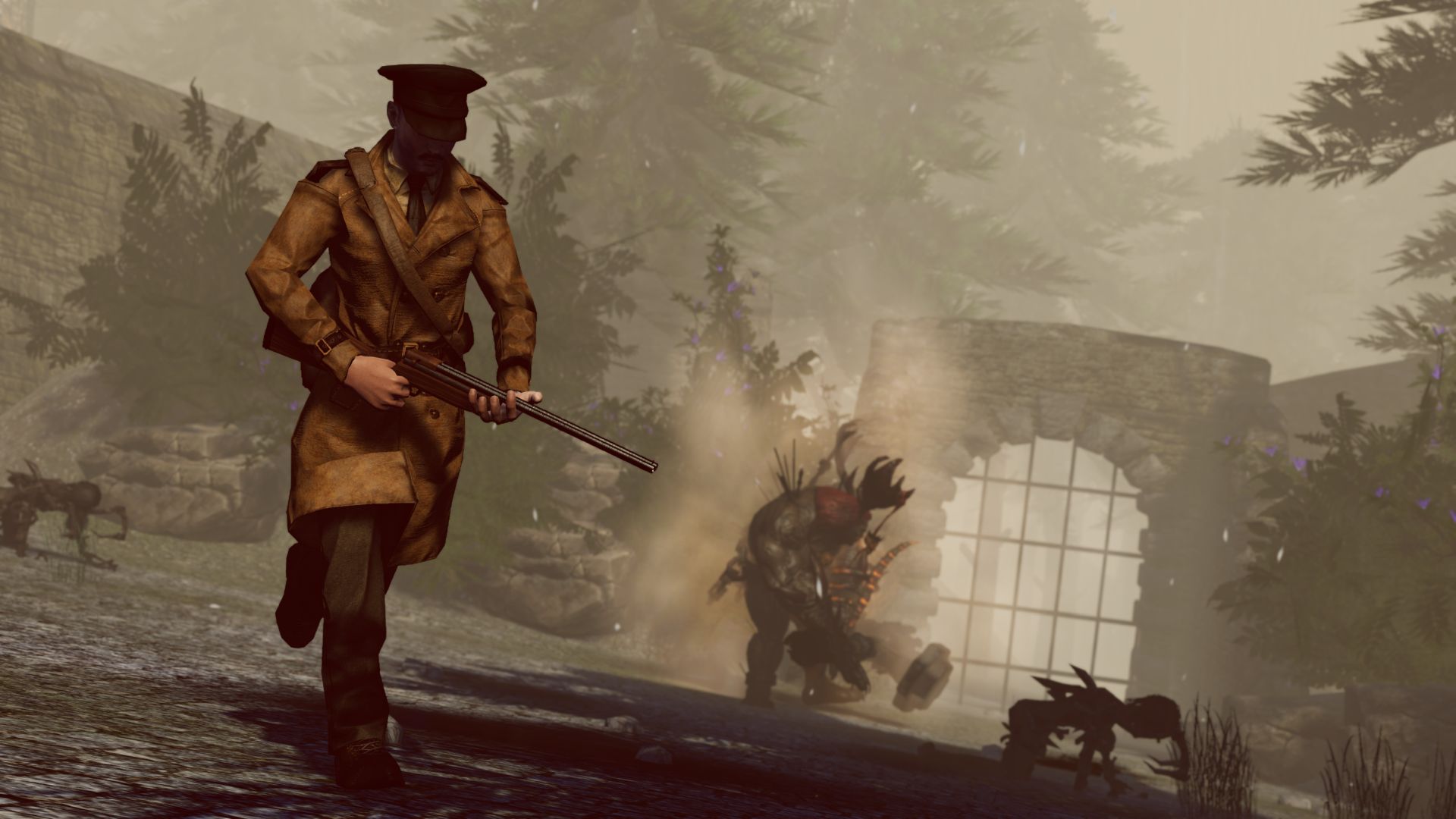 Combat System
Here we have very basic melee 1-type of strike combat, and basic ranged combat with a “point, click and shoot” style. Hit detection is inaccurate at best, there is no weight or feel on melee impacts, and combat is altogether useless as you gain nothing from it and enemies will mostly kill you for no reason.

The animations are choppy for both the player and enemies.  Running away is far more efficient and less time consuming. There is no form of Stealth Takedowns or anything like that either. Overall is severely lacking.

Content
This game has 3 chapters so far, as stated by the developers themselves in a post. The average player finishes this in 2-3 hours. Yes, this game lasts 2-3 hours. If you take care to “explore”, read the letters and such, I can safely assume I could rush through it, get keys, open everything real fast killing nobody and finish it in 30 minutes.

Balancing
The healing items are very underpowered compared to how much damage enemies do. Mutated enemies require a barrage of hits and ammo to kill for no reward. Normal enemies are fair enough, just keep staggering them and you are fine until they die. The money ratio until you get to the Vendor is fine, you can buy some stuff you won’t even need because after that there is a Boss and I suppose the end of Chapter 3. I could not get past the boss because it was bugged and even reloading could not fix it.

Challenge
The challenge depends on how you approach it. Just run around and nothing will ever touch you. If you choose to pointlessly fight all enemies, well you are in for some pain, but that is useless anyway. The game does not tell you what to do or where to go and that is good, but the paths are so straight and beaten with few other places to explore, thanks to all the invisible walls, that you will find everything easily. 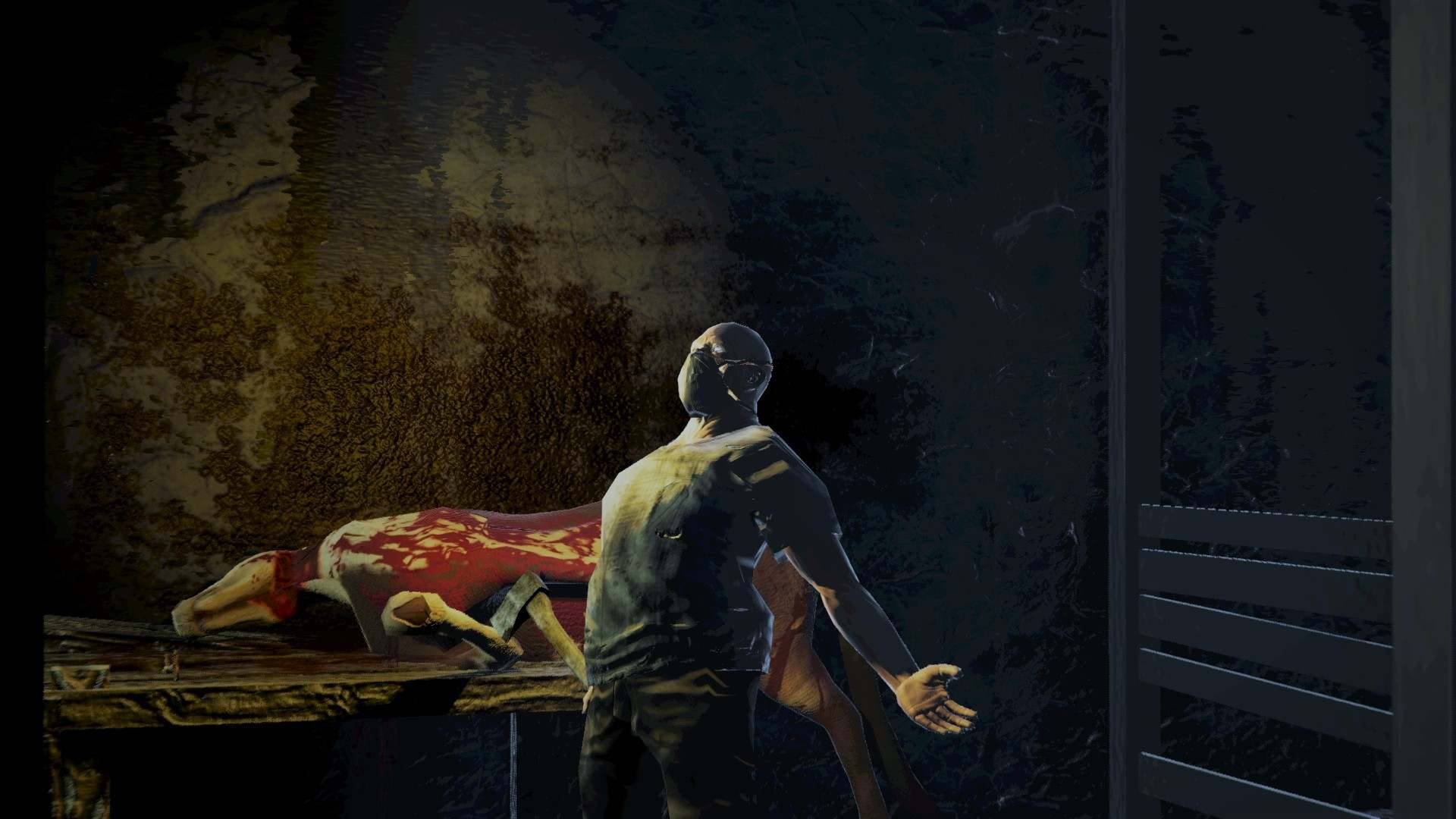 Graphics
From my experience, they were absolutely terrible. They ruin the atmosphere completely with disproportionate lens flares and reflections on metal, badly realized distance fog, pop-in of trees and elements that is unjustified for the graphics it delivers, textures and models are mostly low poly and mediocre, the only appreciable things are some texture on melee weapons and the dynamic shadows, which do little to save this game.

Sound
I found the sound design to be mediocre as well. Some screams and ambient sounds are decent I give you that, but overall the sounds are barely sufficient. Guns don’t pack a punch or echo through the ample forest, melee hits sound like a wet rag on the floor and really don’t deliver what is expected, no sounds for going inside bushes or on different terrains. 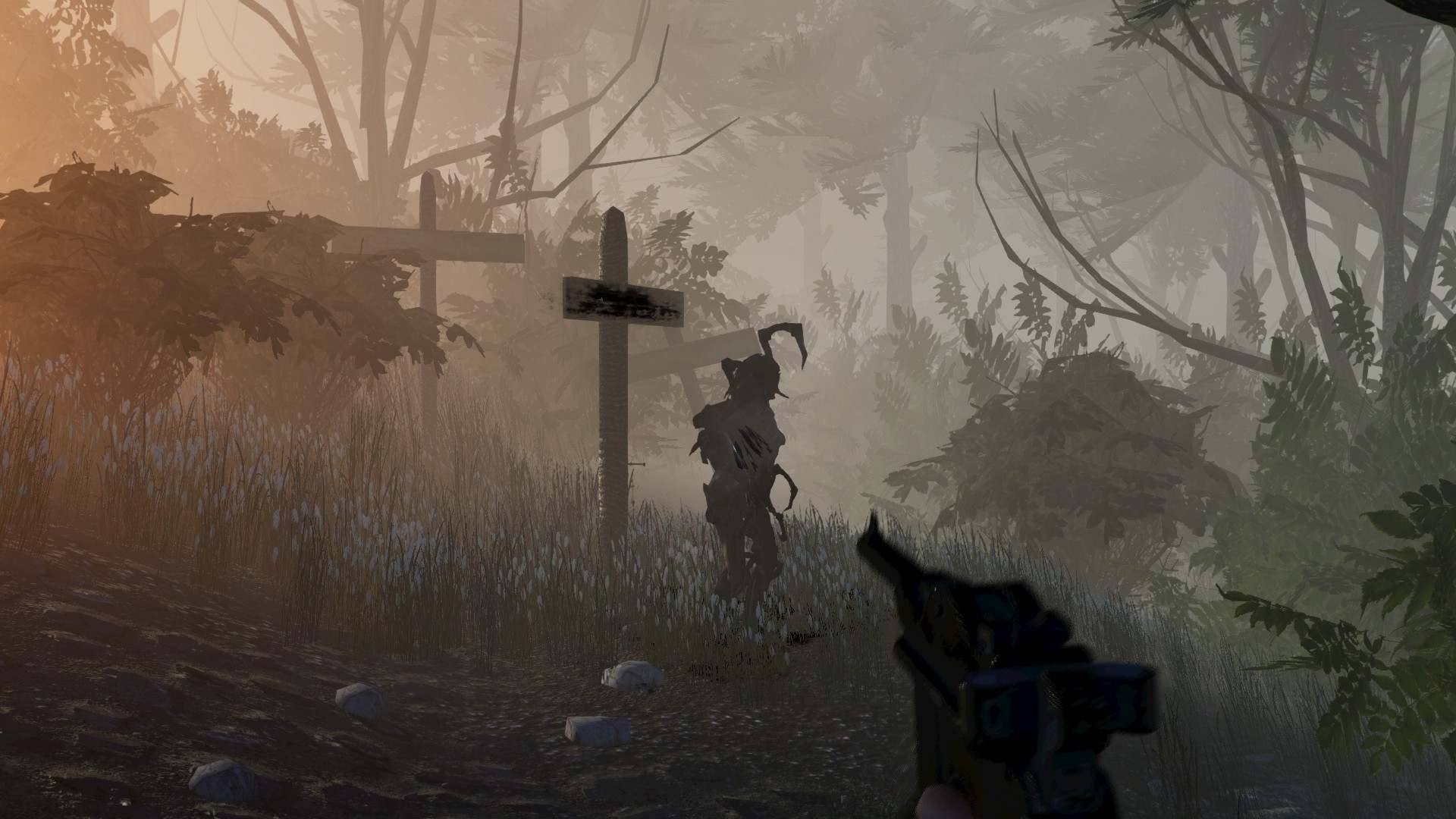 Performance
Nothing bad to report, this could probably run on a toaster.

Stability
The game may require several tries to start up, it just doesn’t work sometimes.  Only luck can tell when it will and when it won’t start. Other than this, no other crashes or stability issues.

AI
Enemies are just programmed to follow you and attack, they disengage when you are too distant, and that’s it. Other than that, there is no AI to speak of.

Quality of Life
Inventory does the job as controls do, but nothing more than barebones sufficient. It’s alright.

Bugs / Issues
The bugs in this game are countless. Enemies going through walls and doors, hits not registering, enemies being in the same position after reloading a previous save, enemies spawning inside safe houses after loading a game and instantly killing the player, a game breaking bug occurred with a boss fight in chapter 3 when and after killing the boss a rain of money sacks (???) erupted from the boss itself, degrading performance very badly and overflowing the map with thousands of money bags to the point of crashing the game. After that, reloading did not fix the boss which remained stuck even after reloading previous saves, thus breaking the game completely. 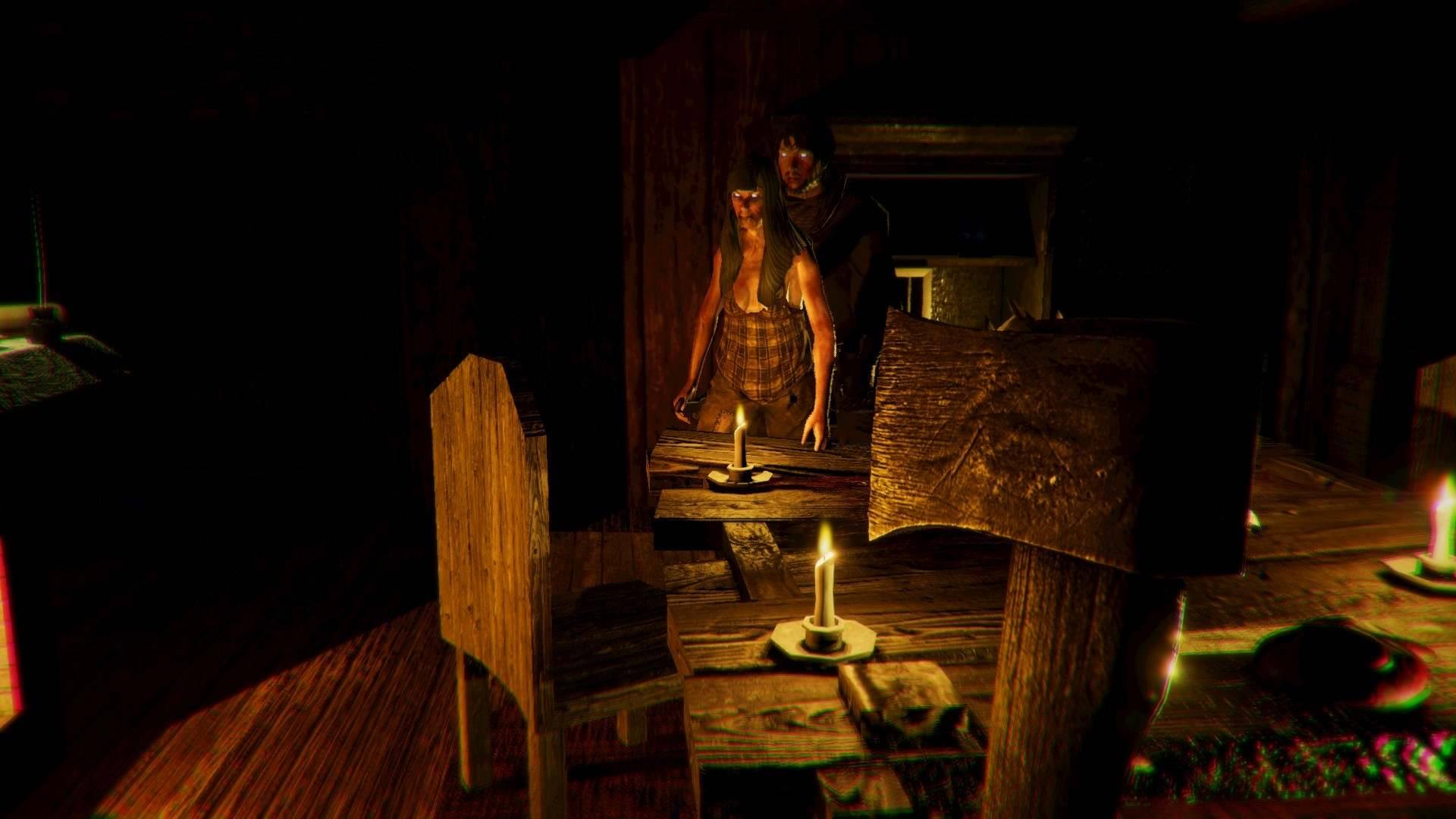 Hegis’ Grasp is a poorly made and poorly optimized indie survival horror game that is severely lacking in multiple critical fields. The ridiculously low longevity, mixed with the mediocre (at best) craft it has been made with, make Hegis’ Grasp an Early Access title at best with a lot of hard work ahead to just become acceptable.

We reached out to the dev for his comments on this article. He says the game will have more content coming within the next few months that will complete the storyline. They also have the Survival mode planned to be unlocked rather soon! The majority, if not all, the bugs experienced should be fixed by now, if not in the next update (that will include Survival mode). This article should be treated as a first impression, as the full game has yet to launch [ if this is the case, we wonder why it’s not in Early Access but never mind ].