Mercury Fallen is a new science-fiction colony management simulator. Can you turn a dilapidated underground structure on an alien planet into a home?

[ Note: the dev says there have since been updates that added some new content and addressed some of the concerns in this review such as the lack of Vsync ]

Mercury Fallen is the debut title from indie developer, Nitrous Butterfly. Here, you control the survivors of a malfunctioning Mercury Facility from Infinity Corp. Placed in stasis capsules countless years ago and sent across space to colonize a new planet, you wake to find that the underground facility that was built by autonomous robots while you slept has failed to wake your colonists at the designated time. Unknown decades have now passed — years in which the facility has slowly degraded.

All is not lost, though. You still have a working mining robot and a handful of survivors alive in their capsules whom you need only to wake and they will be eager to get to work restoring the facility, carving out a life in the underground surroundings.

The game has a nice sort of high-tech underground feel to it, with neon-like ‘mood’ lighting (you can even select the colors for placed lights) and relatively dim, but not annoying, ambient light. Characters all wear Star Trek-like jumpsuits — again, you can choose the colors — and move about well, with nice animation loops. There’s free camera panning and rotating about the relatively small maps, and zooming covers a fairly wide range, though a bit more zoom out would be nice. Character models, when zoomed in to the maximum, look a little weird, with no discernible facial characteristics, but rather than being creepy or lacking, it actually looks quite good. 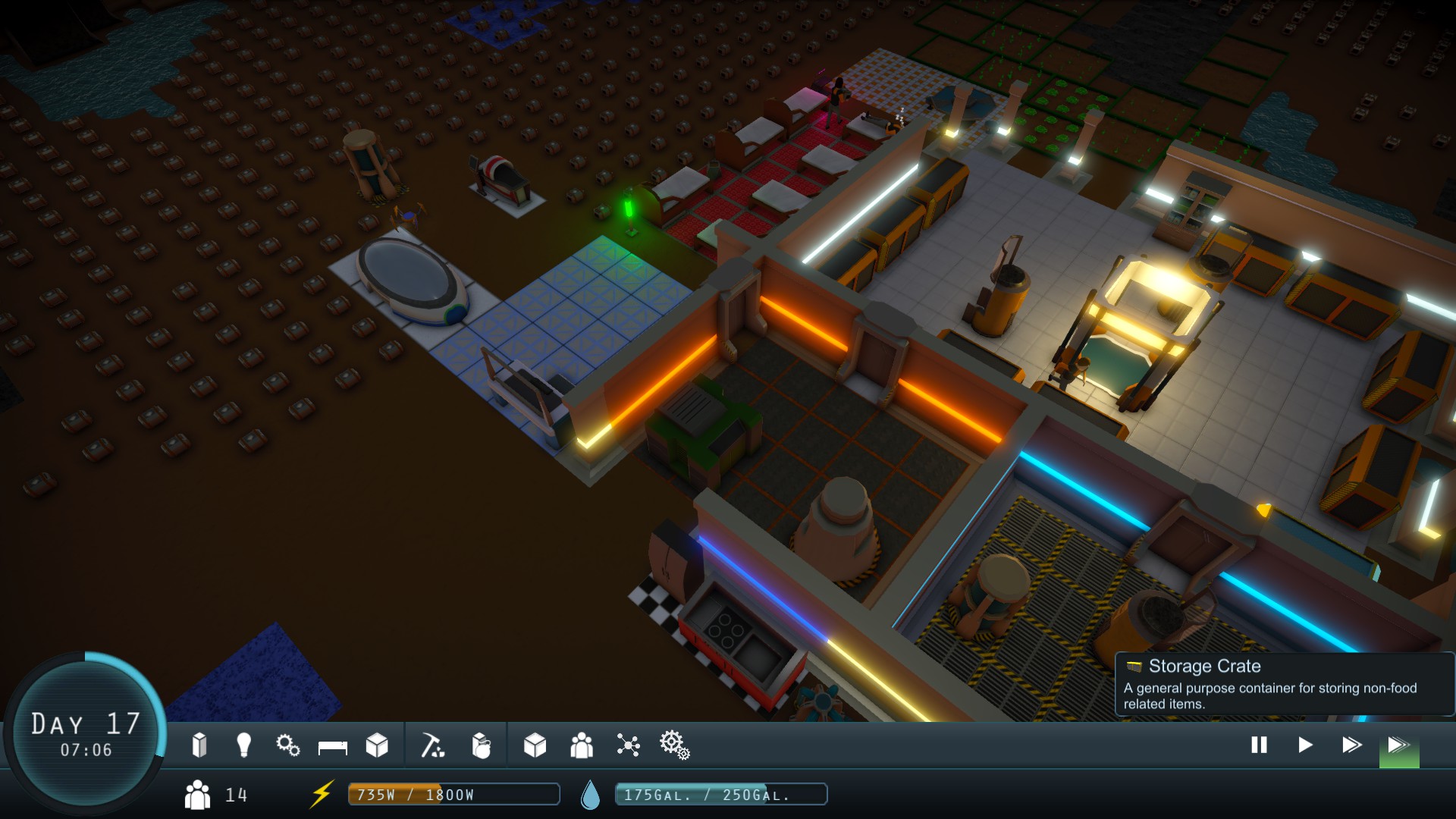 The interface is a little bit wonky in places. It shouldn’t be hard to use, but I always find myself opening the wrong menus when I want to build things. I think it’s because of the icons used for the menus. There are also a number of spelling and grammar errors, and the tutorial tooltips don’t fit properly: “Click on a stasis capsule and …”. 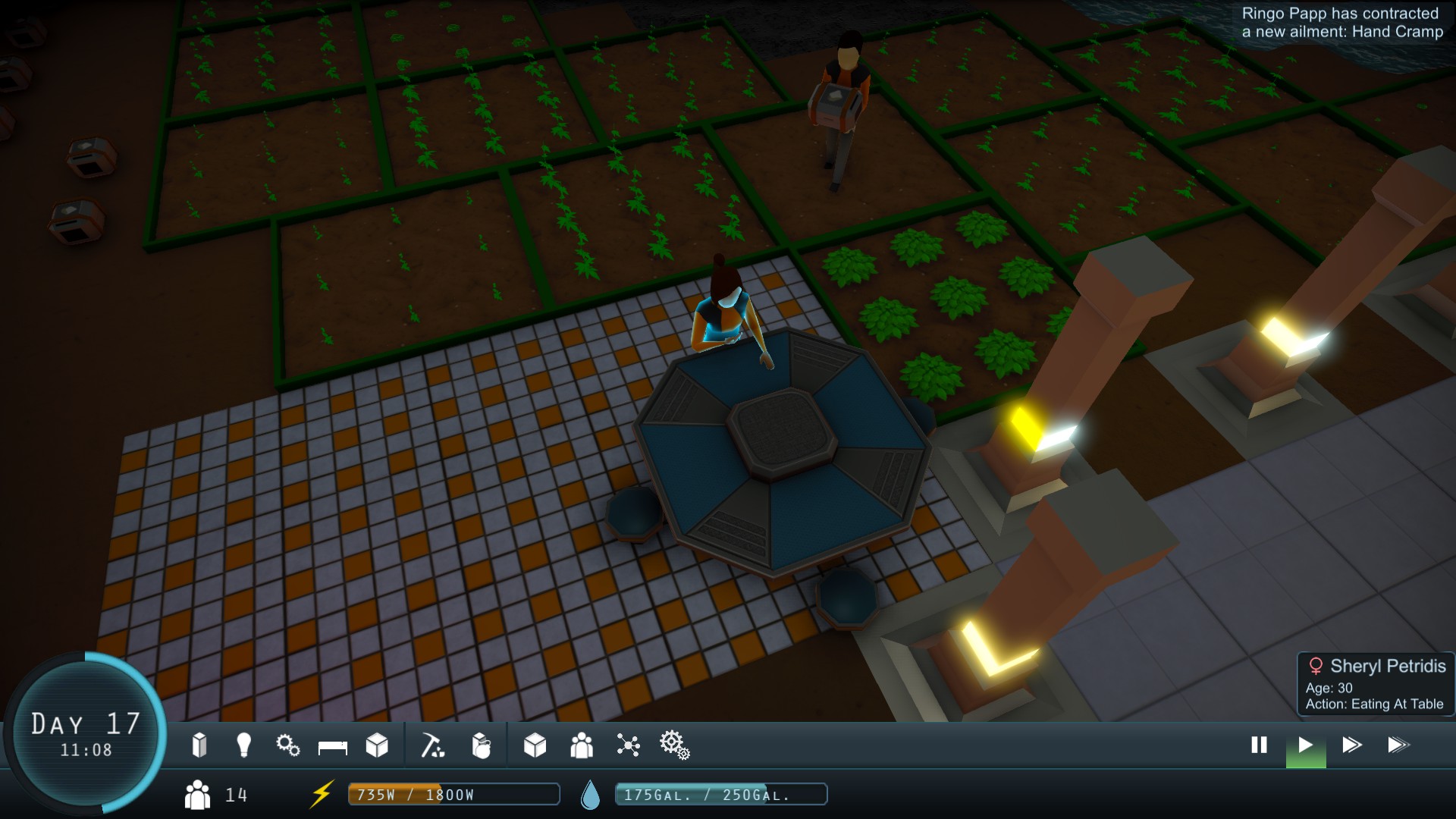 I found the graphics options to be very limited and there’s no vsync, so my video card fan tried to levitate my laptop while playing. The performance seems mostly fine, with only a couple of small hiccups when rotating the camera on occasion. Given the large number (thousands) of elements on the floor once I’d cleared the map, I was actually quite impressed; the prefabs work well.

There’s no music at all beyond a few resounding notes on the title screen and there are no voice actors.  Sound effects, too, are minimal, with sporadic mining laser sounds seeming to be the only in-game sounds. The interface gives some auditory feedback, but other than the video card fan, the game is very quiet. 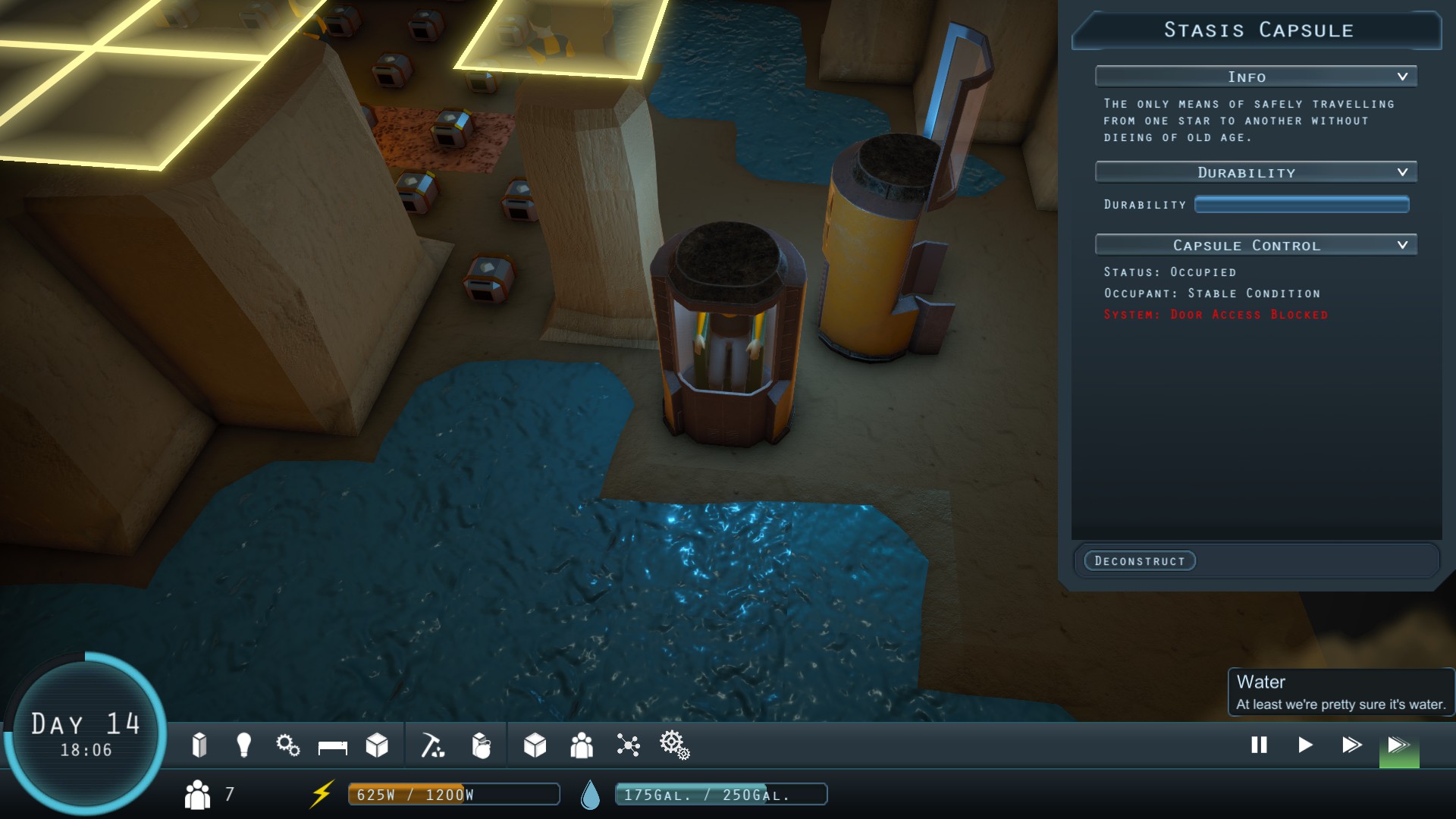 Mercury Fallen plays essentially like any other colony simulator. You move the camera about with mouse and keyboard, place blueprints and assign roles to indirectly control your minions — er, colonists — and gradually unlock new and better things to build to make your colony more productive / self-sustaining / profitable / whatever.

However, everything in Mercury Fallen is currently very limited, like a proof of concept or demo. Research, in the form of data recovered by computer from the Mercury Facility’s archives, is limited to six items, which you can gain in under an hour of play. There are only two crop types: hemp for plastic and potatoes for eating. Potatoes can be eaten raw or, with the appropriate research completed and cooking items built, cooked into mashed potatoes, but they’re the only two items that colonists can eat; they must be suffering from some pretty intense vitamin deficiencies. 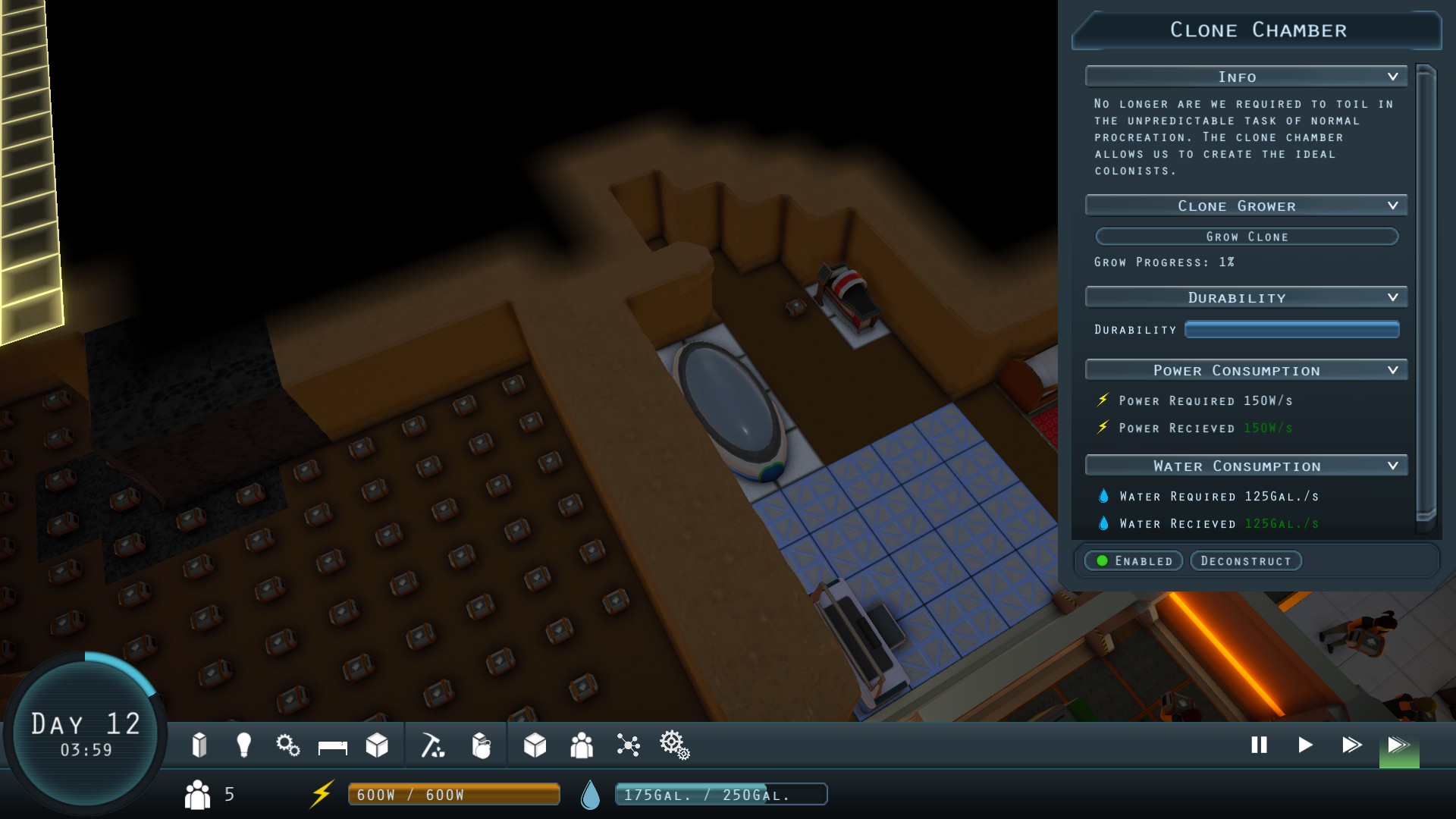 Colonists have three basic numeric characteristics: smarts, muscles, and athletics. These don’t really matter, though. Similarly with the individual traits that colonists can have; you’ll probably not even notice any difference unless you really try. I also didn’t notice any difference to my colonists’ mood or performance once I added medical cabinets, plants, and lights. Even beds aren’t really a necessity.

Within about two hours of directed play, you will have seen everything the game currently has to offer. I left it running at top speed for an extra half an hour while my colonist mined the rest of the map, and as expected all I found were a few more scattered powered-down robots and sealed stasis chambers. I ended up with a bigger population, but still nothing to do. 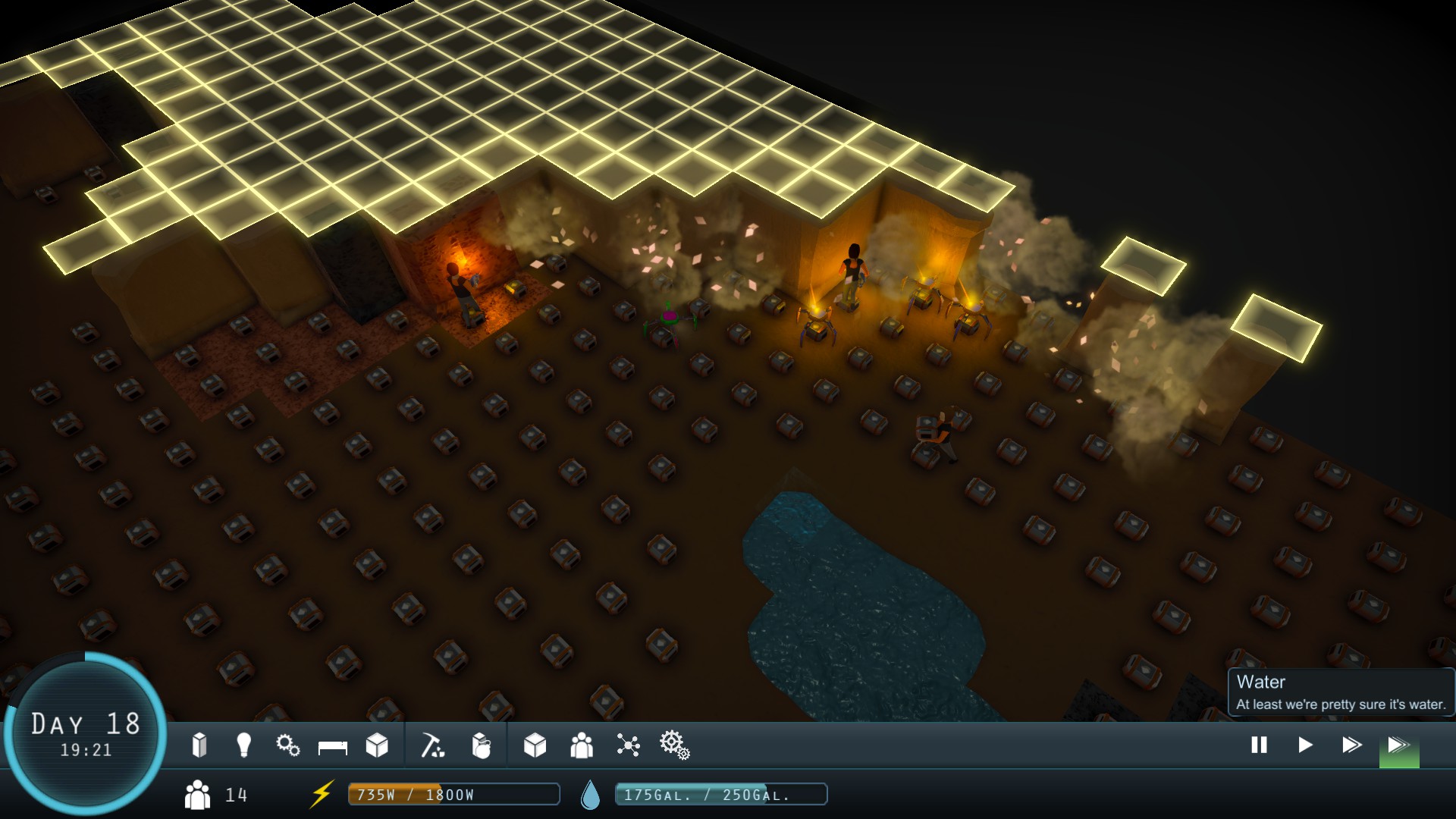 There are no set maps. Instead, everything is procedurally generated based on a human-readable seed string that you can specify or randomly generate from a pre-defined list. In theory, this should provide essentially unlimited replayability, but in practice, the game currently has so few elements that every map plays out basically the same as every other one, with only the availability and distance to resources making much of a difference.

There are no challenges: no game-changing events, no enemies, and ultimately no real exploration. That may all be coming in the future — I hope so — but at the moment the game only offers a couple of hours of interest. After playing the excellent RimWorld, Mercury Fallen just feels a bit lacking. 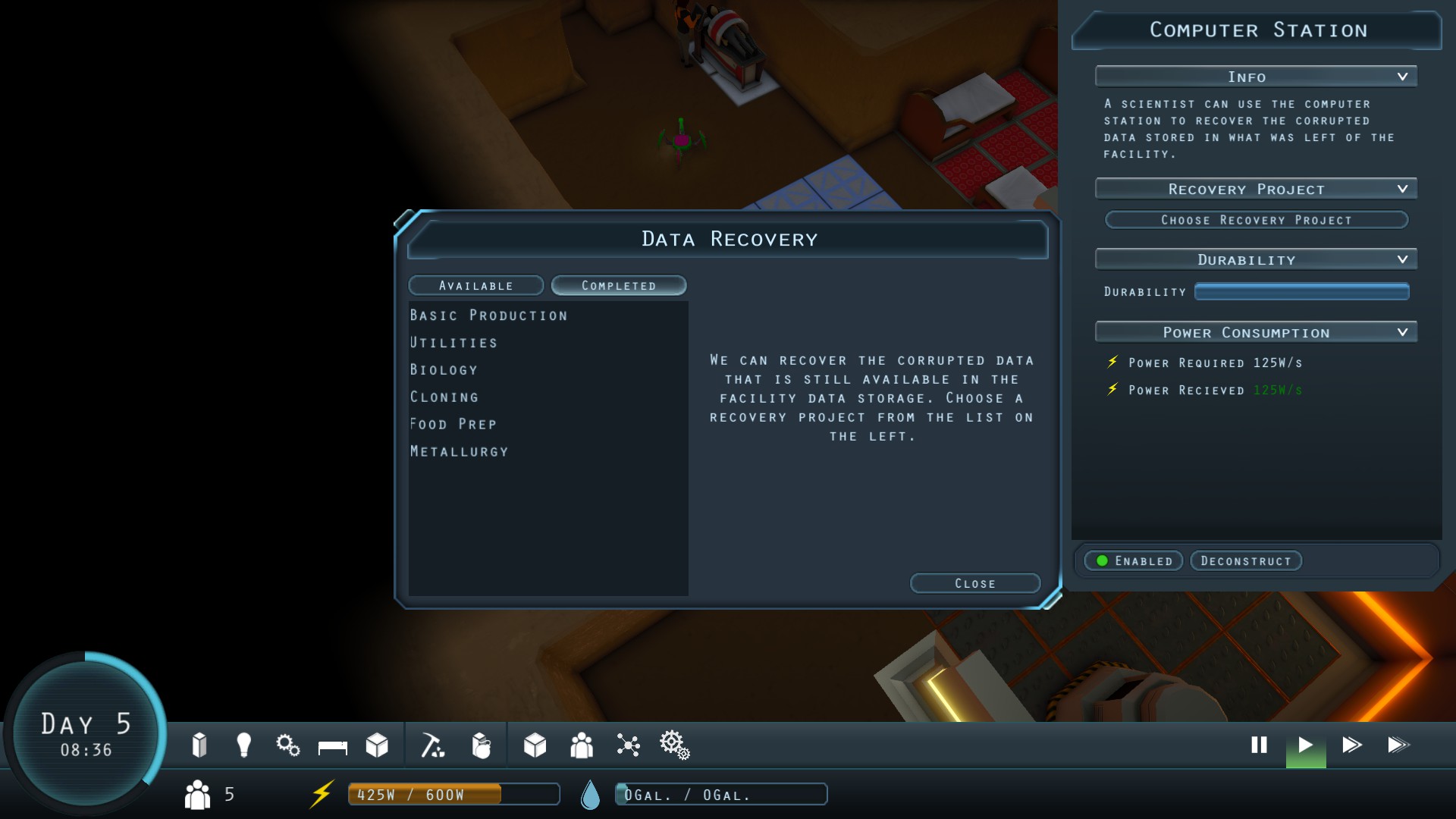 One expects Early Access games to have a few issues and Mercury Fallen is no exception, but it is pretty stable. So far I’ve only found a few annoying issues, such as WASD-based panning of the camera becoming stuck after pressing ESC to close a window (you need to right-click the mouse instead); water being stated as reducing movement speed by -55%, but actually colonists and robots can’t cross it at all; saving and loading remembering production queues, but forgetting selected mining areas; and a relatively large number of grammar and spelling errors. The “Comm Officer” colonist role is also not explained and, I assume, not yet implemented. 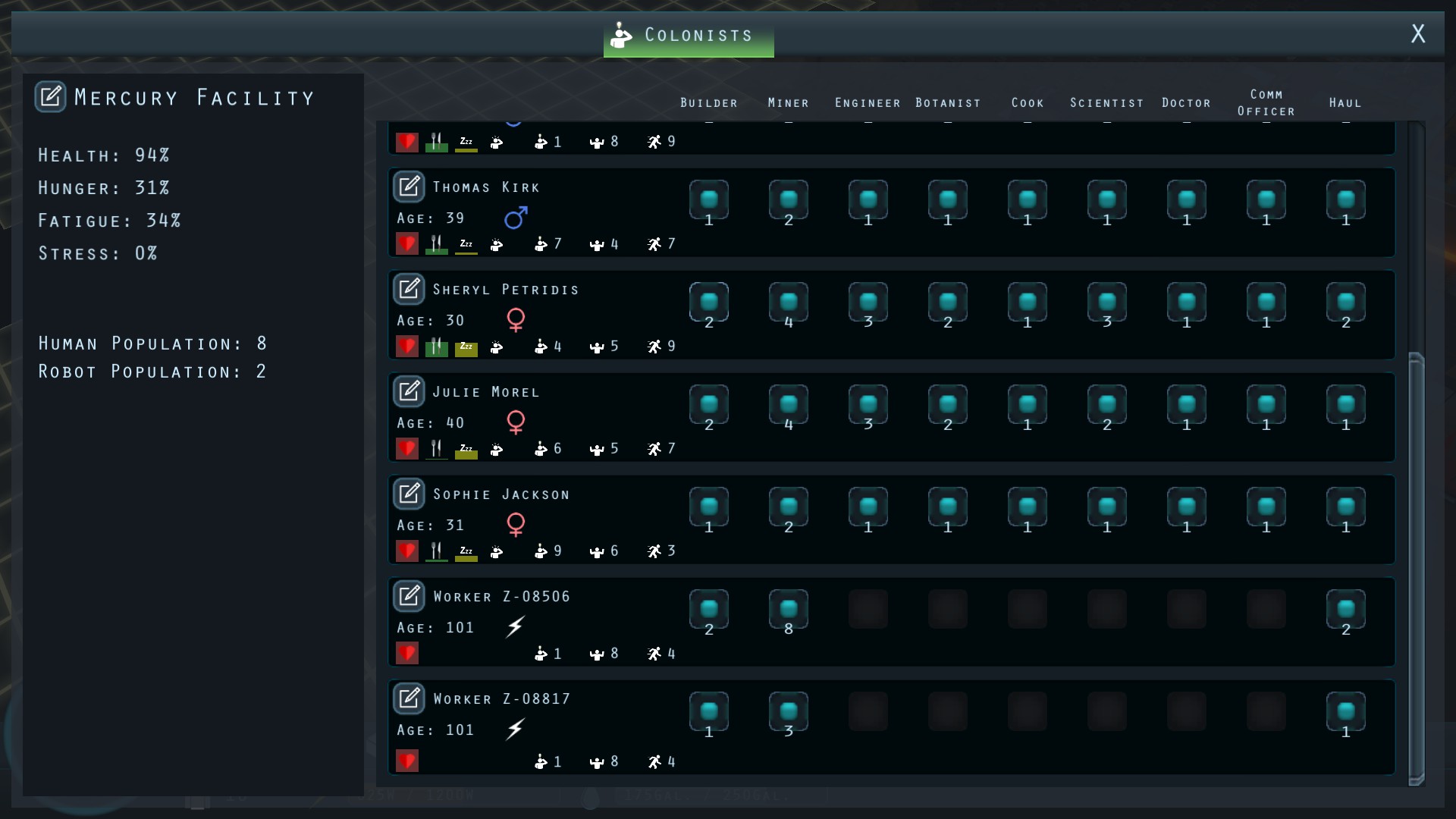 Other issues that are not really bugs, but which could do with some attention, include the elevator (not yet implemented); colonist management, which would be much better with individual priorities rather than the simple enable/disable options currently available; power and water routing, which doesn’t seem to work quite right with multiple sources, and really needs an on-screen indicator of maximum range — and also a way to remove conduits once built; and informational messages explaining why things aren’t happening as you expect. For example, I couldn’t work out for ages why no one would use the ore refinery to make the steel to build my cloning chamber and refrigerator. It turned out that I didn’t have the plastic required for the construction; once my next hemp crop was ready a colonist harvested it and turned it into plastic, and then finally another colonist started using the ore refinery to make the steel and built the devices. 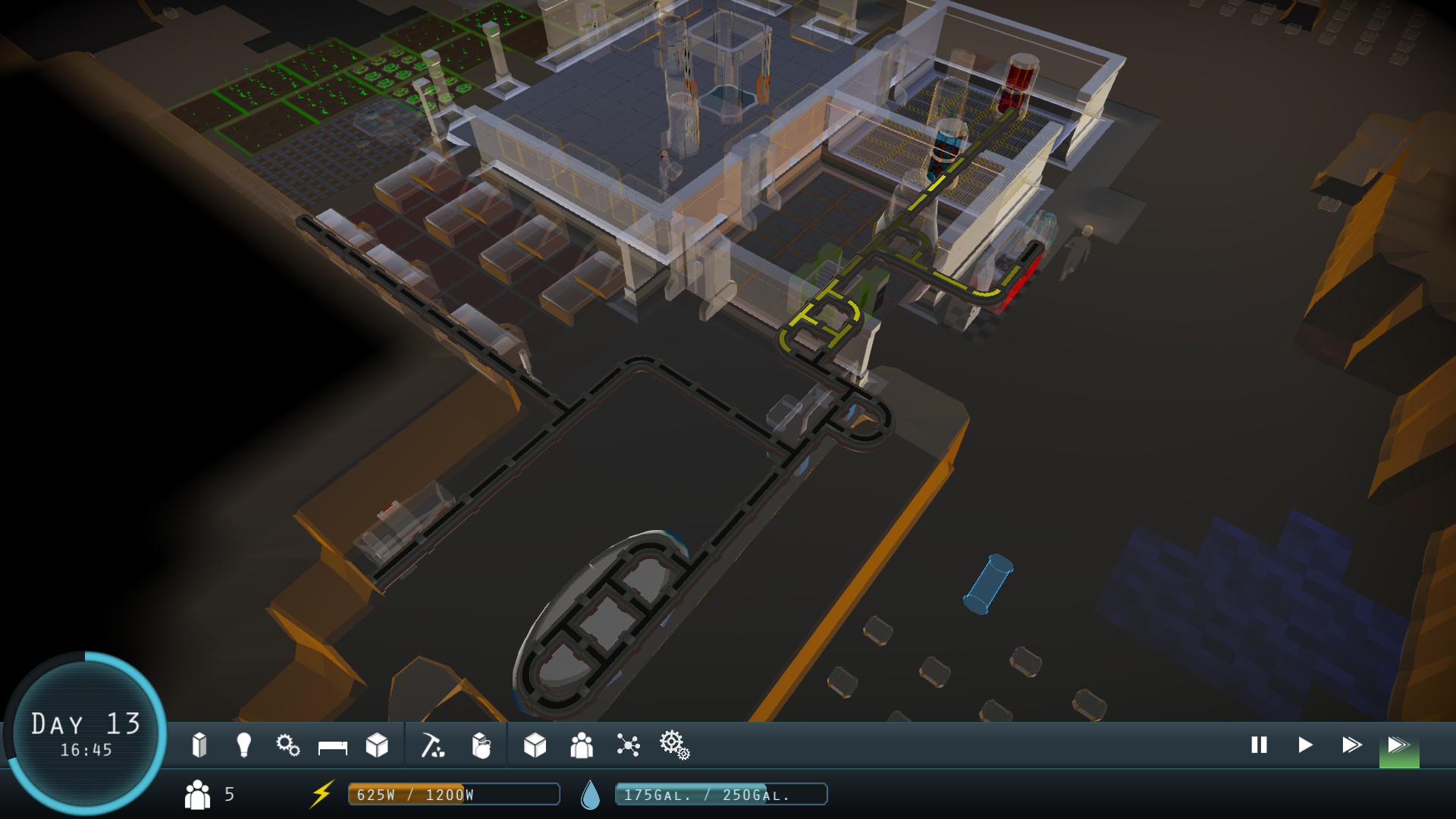 I would love to recommend Mercury Fallen, but I can’t right now. The game is a great start, and I expect it to be fleshed out further in the coming months, but at the moment there’s just not enough here to justify the price. If you enjoy colony simulations then you should definitely keep an eye on this one, but until there’s a lot more to do it can only provide a couple of hours of moderately fun distraction.