If you heard anything about the developers of this game, it might be one of the games which is featured as the first story; The House Abandon, a horror text adventure that took 2016 by storm. A year later, we have an official Steam release with three other stories wrapped in mystery. They may have already made one great game, but can they keep it up for three more?

The House Abandon plays like any other text adventure though, with a huge difference that might not look all that substantial in the beginning. Instead of the screen equating your screen, you are instead seated like you probably are right now, at a desk with the computer actually containing the text adventure off to the left as your lamp shines on your keyboard and the lone photo frame directly in front of you. As you continue on through the seemingly innocent adventure of going back to your home that you moved away from, it quickly turns dark. The house you just went through is a twisted version of itself and suddenly the text adventure isn’t just a game on the old computer. This might not even be located in an ordinary house as small changes continue to happen right in front of you as the text adventure plays on. 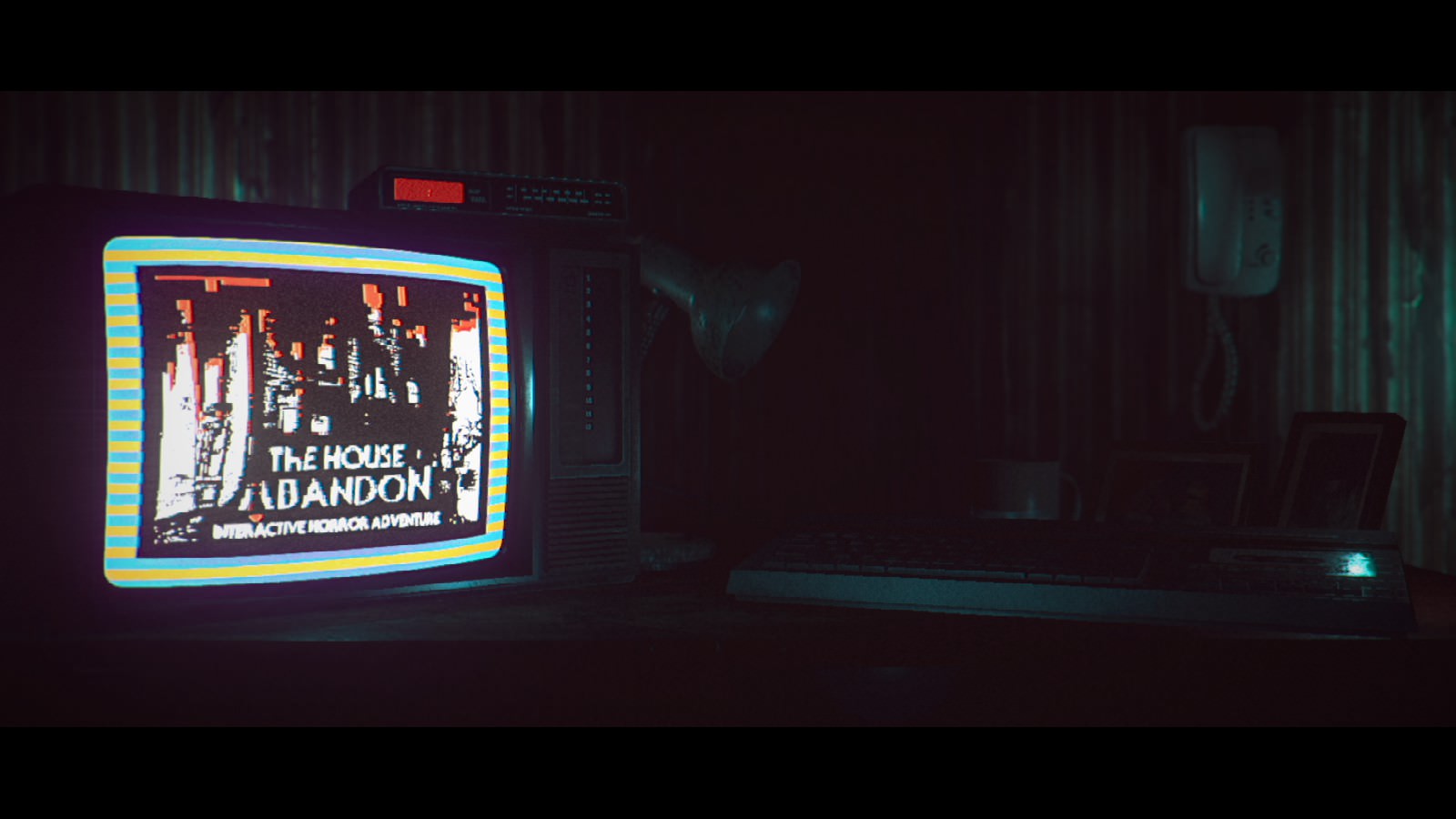 The first story is a text adventure, so the other three must be as well right? Nope! The second story, The Lab Conduct, strays away and puts you in the shoes of someone performing experiments on an artifact in a dimly lit room with a mysterious voice guiding you to continue as instructions appear on a computer to the left of you. The computer is also holding information to help you know what equipment is where and the information about specific equipment. You don’t have much choice to deviate from the owner of the voice as you try to set the needed equipment correctly and turn off unnecessary equipment, the tension ramping up with each experiment.

I might have lied a little. After conducting multiple experiments, you do get back into a text adventure for a short time. Though do keep in mind that before this, you are made to look into a bright, flashing light to advance multiple times. So if you are susceptible to this, you really should turn away from the game. You do get more story beats that are not entirely clear until you know the full extent of the story. 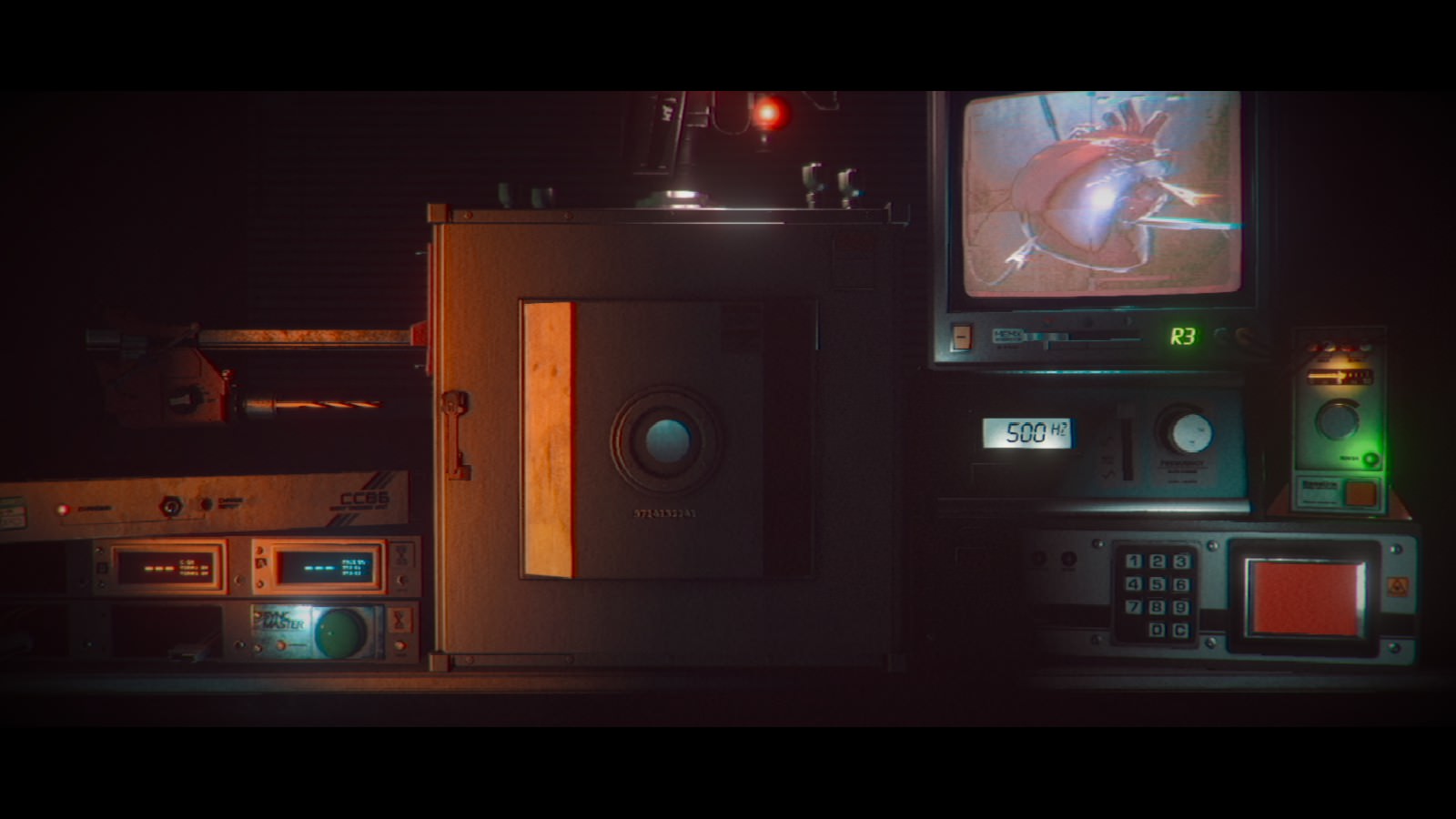 The next story is The Station Process. Once again, straying away from the previous story’s gameplay to show some different scenery and focusing more on codes. Stuck inside a station located on a frozen tundra, the only people you can converse with are not in the same building anymore. Everyone is isolated in their own station far away enough that going out is risking everything. People try to stay in contact with each other through a radio, hoping to stay alive and prevent others from being alone. Though, we can’t all have what we want. You have an important role, you receive transmissions and , in turn, you send them back. First, you are required to get a passcode, which is attainable by going to a specific radio frequency before continuing to send it back. 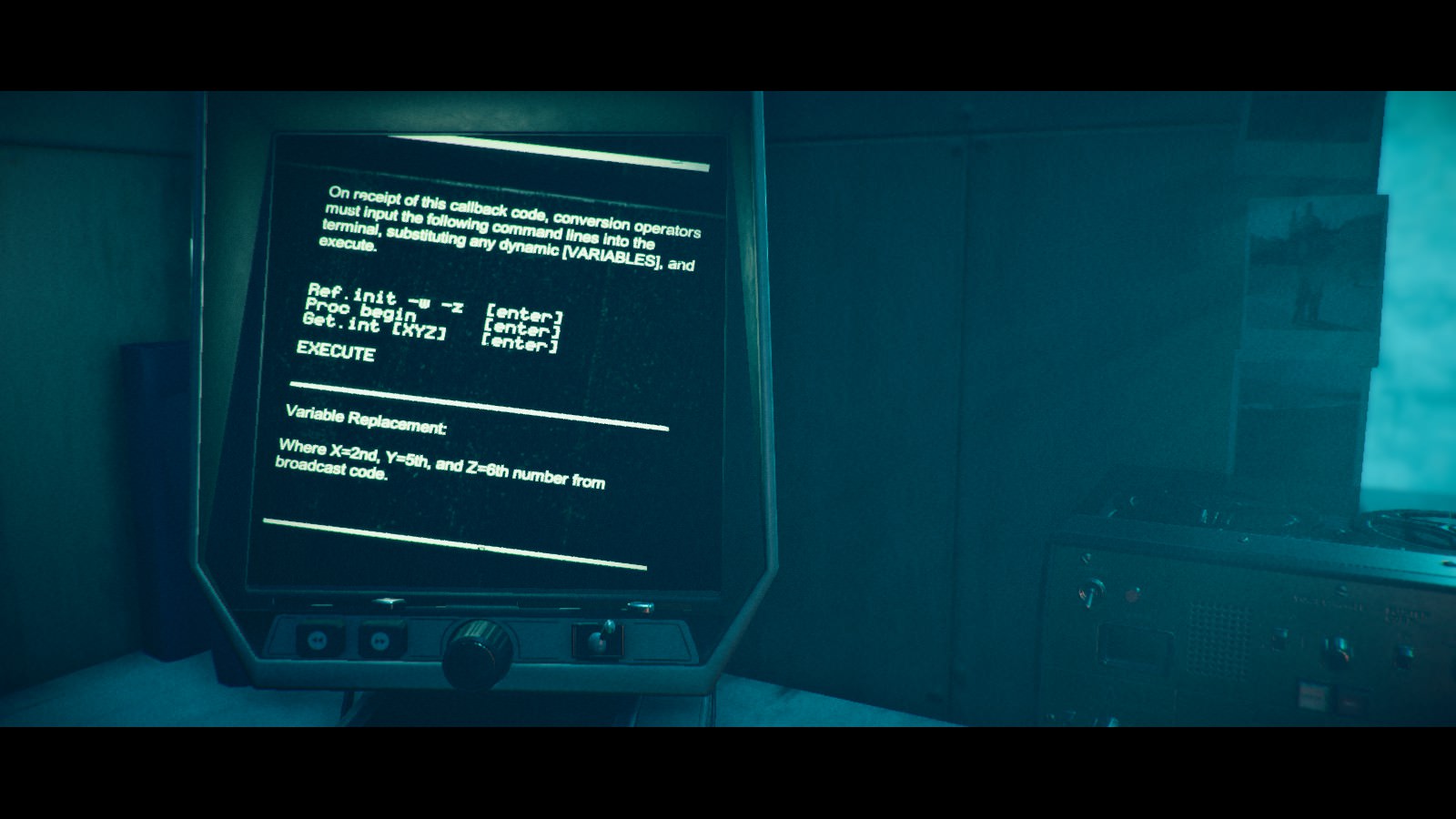 There is one small hurdle that may hinder you, the microfilm. The microfilm contains the required codes needed for input based on the code word. You can zoom into, rotate, and focus so the microfilm can become easier to read. If the code word is “Chevron”, after searching for the page titled with it, the lines of code you need to enter are placed here. There might also be values set that needs to be replaced with the corresponding passcode, as it might ask for the second number to replace ‘a’. The difficulty ramps up at a good rate, with passcodes soon needing a key to decipher and more values coming in. Finally, you are able to walk away and explore what lies outside. And as you can tell, this chapter holds hints for the overall story, and with the other chapters under your belt, you can easily make some theories on what the next chapter will reveal. 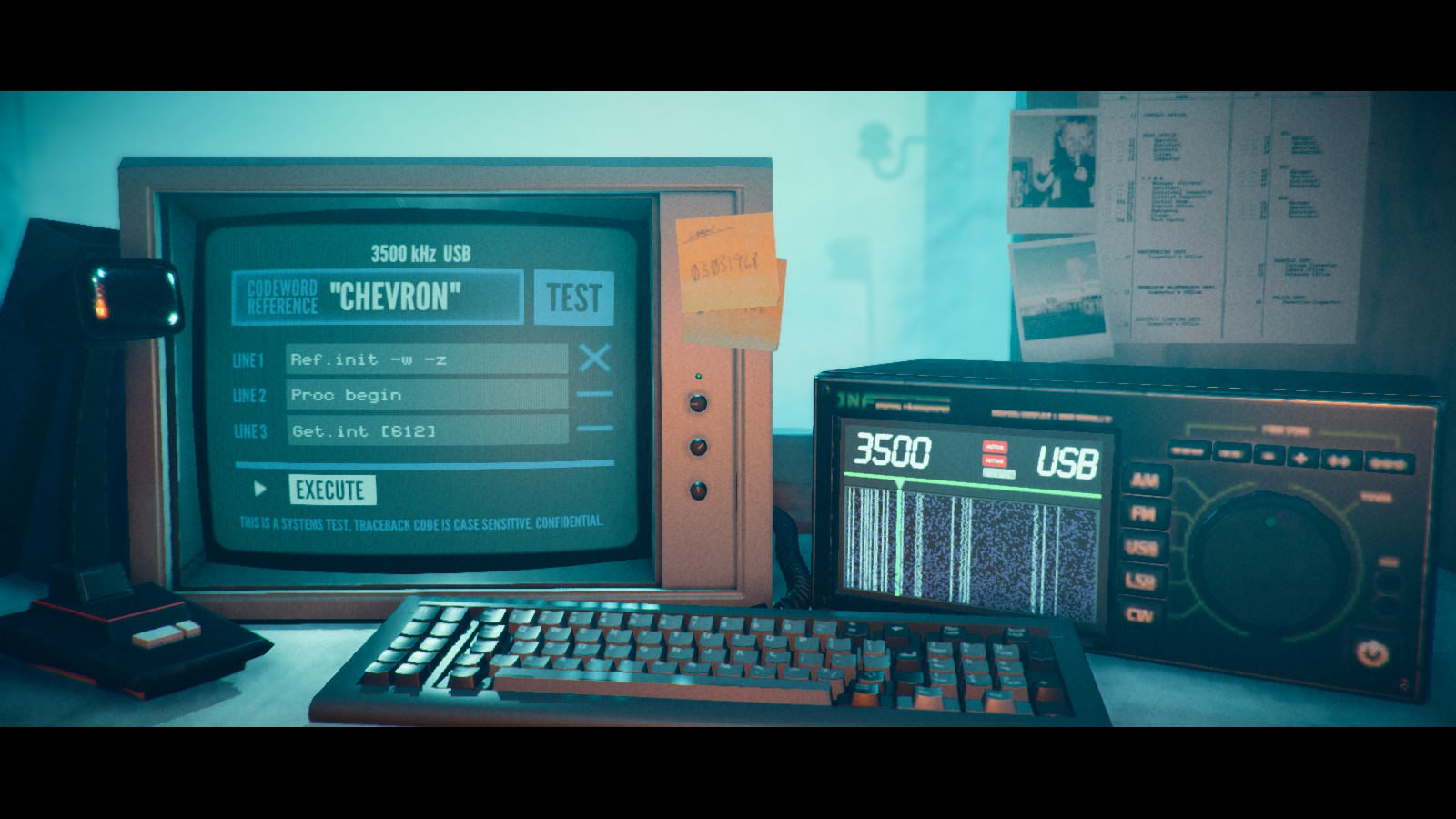 Lastly, the fourth and last story is The Last Session. Where everything comes together and all of the hints from the previous stories are woven together.  Everything comes to a full circle as the game comes to a close. Instead of a typical horror ending, though, it does show a different type of horror than it leads you to believe.  I can’t spoil the ending for you, but I can definitely tell you I had mixed feelings about it.

Stories Untold would be far from terrifying if the sound design was horrible. Luckily, this is not the case as the sound design is great. The clank of the keyboard, the whirr of a machine, and a radio tuning in brings up the tension in their respective stories, bringing life to the world that is subtle yet, combined with the story, brings fear. Fear of what’s to come or the actions you are forced to complete. On this note, the voice work is great as well. Perfectly fitting into the grim world we are given. These voices are easy to latch onto, but are they more than they seem? Can we trust them? 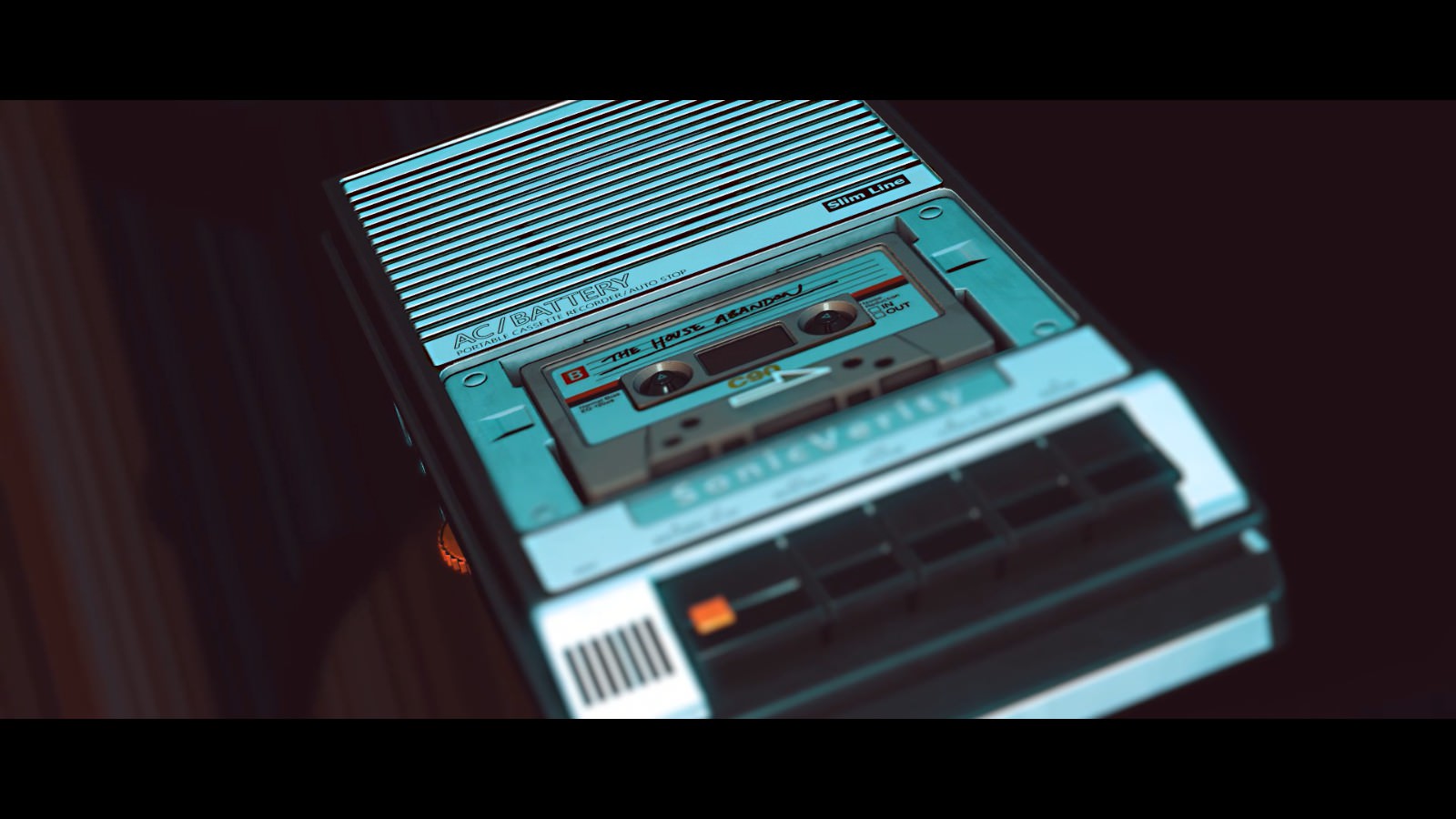 Stories Untold holds a mix of styles that mess with how the player needs to play, going from a simple text adventure to operating machinery, and lastly, to entering codes and deciphering passcodes. It is just enough information that you can get through all the parts of the game with only a few hurdles while also uncovering hints that only make sense when you go back and look. Even with the ending possibly being the one thing people may dislike, everything before it is great. The game does not rely on jump scares but on the atmosphere as the goosebumps just keep on coming.