Warriors All-Stars is a mix of Koei Tecmo’s most famous characters and the popular Warriors‘ mechanics. Even though its story is not enough by itself to keep you coming back, it will catch your attention as it delivers quite a punch in all the other aspects.

Warriors All-Stars ☆  is a crossover Warriors game that, unlike others in the series, features a varied host of heroes from several Koei games. Developed in celebration of Omega Force’s Warriors twentieth anniversary (first title dates to 1997). The celebratory aspect is quite visible, especially when taking into account mechanics like the new special “Musou Rush” attack and comedic interactions between characters. I’ve got to say it made me smile after William (from Nioh) commented while fighting hordes upon hordes of hostiles, that he had never thought he would be a dynasty warrior. Warriors All-Stars is definitely going to catch the attention of long-term fans of Koei and the Warriors series, as it mixes the well-successful Warriors formula with beloved heroes from more recent or popular Koei games.

The comic interactions between characters aren’t the only remarkable things that will catch the eye of fans: the in-game stages and maps are often impacted and themed by participating series’ art styles. The in-game explanation is that the characters are so powerful in will and might that they have influence over that alternative world, being able to, unconsciously,  shape it similarly to their previous land. To put it simply, each participating series adds something iconic to the mix — be it their soundtracks or maps. In fact, themed maps are frequent occurrences, such as a map with areas eerily similar to the Tower of London (Nioh) or a map with a modern Casino right in the middle of a battlezone, or even an urban town setting.

Initially thought to be an all-new Warriors Orochi game, the developers decided to innovate and create a videogame spanning multiple series in Koei’s portfolio. A teaser was released in September 2016 and the actual game released in Japan for PS4/Vita on March 30, 2017 as 無双☆スターズ Musō ☆ Sutāzu (Musou Stars). The release in the west, though, happened a few months later under the name Warriors All-Stars, for PS4 and Windows on August 29 and September 1 for North America and Europe, respectively.

Not only does the game brings new mechanics and features not present in previous Warriors games, there is also open-world gameplay with multiple endings and many characters to start as. On top of that, superb voice-work (most — if not all — by the original voice actors) creates a compelling All-Stars cast.

A host of about 27 famous characters from previous Koei games finds themselves in a mysterious world after the Queen’s daughter summon heroes from other worlds to save their land, which relies on the powers of a miraculous spring to thrive. The powers of the spring were controlled by the King, who, after dying, left the world in complete chaos. The summoning of those heroes doesn’t go smoothly and they end up scattered among different areas of their world. During this turmoil, members of the royal family rise to claim the throne and start a search to gather as many heroes as possible under their banner, dividing the heroes into three warring factions. 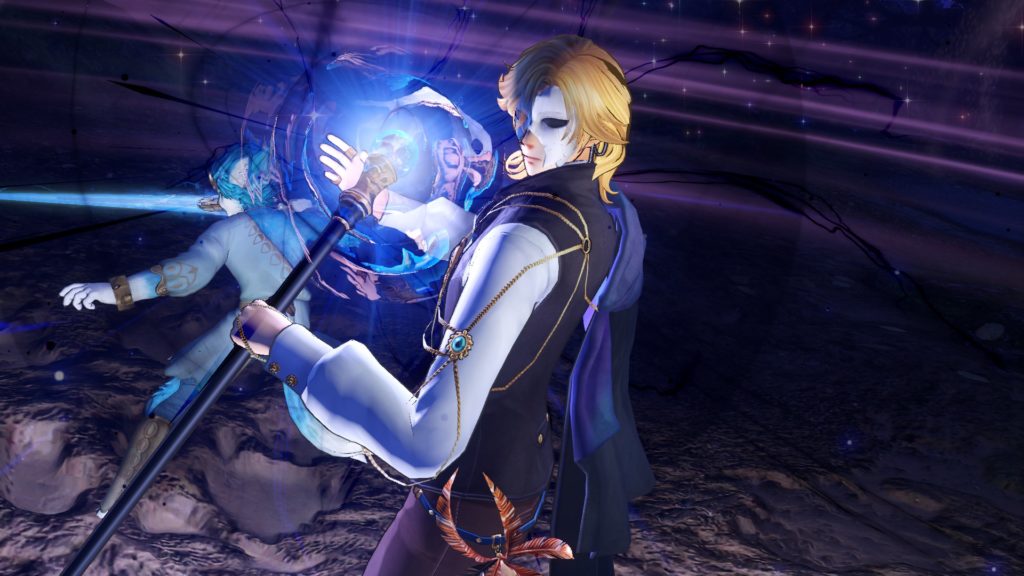 As soon as an appearance is reported, it’s up to the player to find and gather these heroes as quickly as possible, as they significantly boost allied forces with powerful skills and allow gamers to play as them — or add them to the personal squad. The personal squad is composed of four select heroes whose skills are completely at the player’s disposal during battle. The heroes added to the personal squad will cheer players during the Musou Rush and will offer their special Hero Skills every once in awhile, but it’s important to use it wisely, as it takes time to recharge! 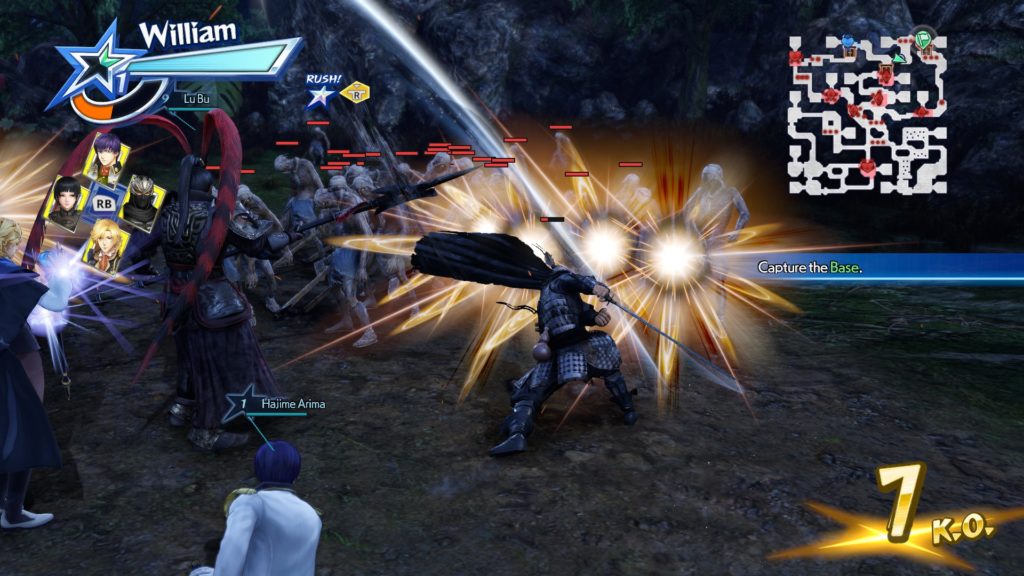 The All-Stars cast is quite impressive and it features characters from famous franchises such as Dynasty Warriors and Samurai Warriors. Other notable mentions are Atelier, Toukiden, Ninja Gaiden and more! Warriors All-Stars is a good chance to spend more time with a favorite hero, albeit the chances are they will be more focused on fighting hordes of enemies than doing what they originally did in their video game series. It’s a refreshing experience for fans of these series, and, for the fans of the (fewer) older characters, the experience might even be a little nostalgic. (Opoona – 2008, Kagero: Deception II – 1998, Rio: Rainbow Gate! – 2011, Ninja Gaiden 3: Razor’s Edge – 2012, Toukiden: The Age of Demons – 2013) 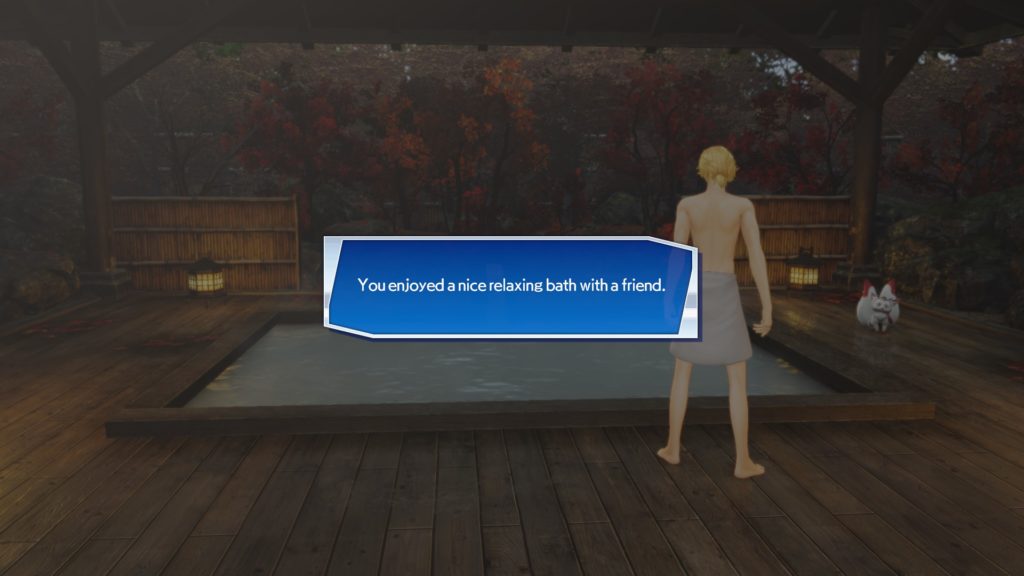 Warriors All-Stars features a friendship meter called “Hero Regard” that increases every time the player takes part in a mission and brings heroes along, or if the player completes a special challenge given to them by a Hero. The meter unlocks exclusive interactions, new items, stronger skills and hero cards, which act like loadouts. If a certain friendship level is hit, new dialogue is available when meeting a friend during bath time. The bathing house is shared between the heroes, giving priority to those who go to battle. A long-term friend might feel more inclined to share a bath than a new hero. While the bathing function doesn’t impact on gameplay, it’s an interesting addition which adds depth to in-game fellowship.

One of the highlights of this release is the Musou Rush, which, fair to say, encompasses what the Warriors series has at its heart — fighting against thousands upon thousands of enemies. The Musou Rush starts a festive moment where huge numbers of enemies appear on the screen and, as they are killed, friendly heroes appear to cheer and congratulate. The objective of Musou Rush is to kill as many as possible in the shortest period of time, and, as thresholds of K.O (150, 300, 500..) are hit, the time available is increased (20 seconds by default). It’s a great way to gather loot (cards, items, XP..)

Hero Skills are another mechanic to keep in mind when taking the field. Those are special rechargeable attacks that can be truly helpful, depending on the hero’s strengths. The Hero Skill could be a negative buffer aura affecting nearby enemies or something more direct and aggressive such as invoking a damaging rain. My favorite one when dealing with enemy bases and objective points is Millennia’s Hero Skill. Millennia is a hero who specializes in creating traps (her game series is heavily based on that). Her skill vacuums all hostiles nearby to a single spot, making it easy to annihilate them in seconds and capture the base.

Warriors All-Stars is an open-world game and it’s up to the player which battles to take part in, and in what order to take part. The game doesn’t force players on a linear storyline, instead, players can roam freely on the world map, which is full of side-quests to upgrade heroes. A common side-quest is to clear — or defend — a military stronghold and while that may not proceed the main storyline further, it expands the visible area of the map, reducing how much terrain is hidden by the fog of war. That is, by taking care of that side-quest, more side-quests come available! 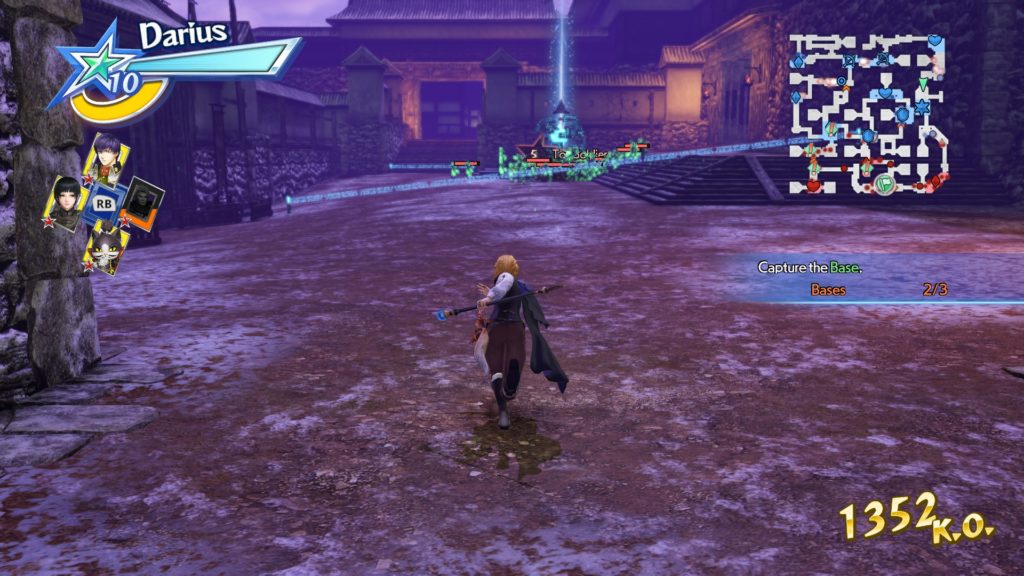 The side-quests may be as simple as getting rid of a thieves’ lair, which rewards cards and other loot, or something more complex like a Drama Battle. Drama Battles are optional quests that are triggered when certain heroes are present in the same team, and it’s usually when they have similar backgrounds or related game themes. For instance, Darius, the head of the Demon Clan on his game series, is invited by Oka, a demon-killer, to help her defend a trade caravan. This often leads to some to some funny chatter between them, but a review is not a good place for spoilers! 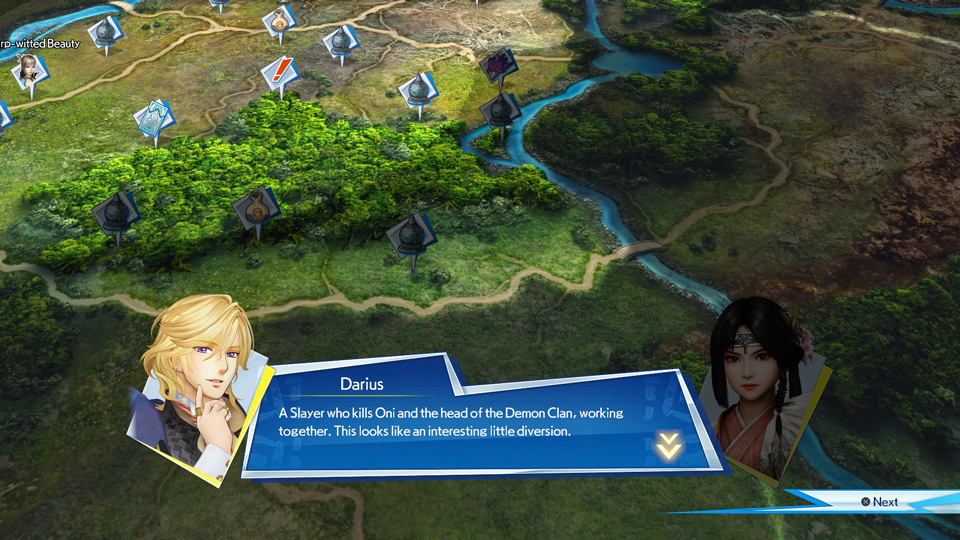 While roaming the world map, it’s possible that a timed mission might appear, usually granting more loot than usual for a mission of its class. While a regular thieves’ lair side-quest might provide a few cards out of loot, it’s timed version will be much more interesting. Those missions aren’t scripted and likely are randomly created by the game using map patterns or pre-set maps. Participating on those side-quests are a great way to boost the squad’s heroes strength and skills, and, of course, the Hero Regard (friendship).

While the backstory of reviving the Miraculous Spring might come as boring and generic to some, the game delivers quite the punch in other aspects, with fun gameplay that will please newcomers and long-term fans. Warriors All-Stars is entertaining and a good opportunity to play once again as a favorite character or learn about the personality of a character from a never-played-before franchise.