Let Them Come puts you in control of Rock Gunar and his tripod-mounted machine gun, then lets you mow down wave after wave of mindless mutant pixel creatures.

Let Them Come is a new pixel-graphic shoot-em-up and the debut title from Tuatara Games.

You take control of Rock Gunar, a tough-as-nails ex-space-commando mercenary working for InfiniCorp. You’re part of the boarding party assigned to investigate the Balaenidae, a “class II freighter vessel”. The last-received communication from the Balaenidae was seven months ago; your mission is to reconnoiter the ship and find out what happened.

Boarding in the cargo hold, you quickly discover that the ship has been overrun by all manner of aggressive mutant-alien things, all intent on making your stay an unpleasant one. As you progress, you find messages from the crew, but of the crew themselves, you find nothing.

It’s a good thing you brought your trusty machine gun. And your boom box, of course!

Let Them Come presents the action from a side-on view, in pixel-graphic splendor. The game takes place in mutant-occupied corridors of the Baleanidae, but unlike most shooters, you don’t go searching for your targets; instead, you let them come to you. Given the limited options offered by the gameplay style, the developers have done an exceptional job in making the game’s many levels look different.

Character and enemy graphics are mostly very well done, and look good even in full-screen HD. Rock looks like the tough guy that he is, and the portrait at the bottom of the screen changes expression as Rock takes damage, helping you to gauge how much more he can take. There’s not a huge variation in enemy types, and some are reused to make more powerful variants, but they are all well designed and easy to discern. The animation is excellent — some of the best I’ve seen in a pixel graphic game.

There are some great little touches, such as Rock flicking away his cigarette when he stands to take another shot at the next wave; the loading screen that shows Rock traipsing along a garishly lit corridor, boom box over one shoulder and tugging his machine gun along behind by its ammo belt; and Rock’s exposed brain when he dies a particularly gruesome death. Weapon and special effects are excellent and the main menu has some fancy main fade/blur effects. 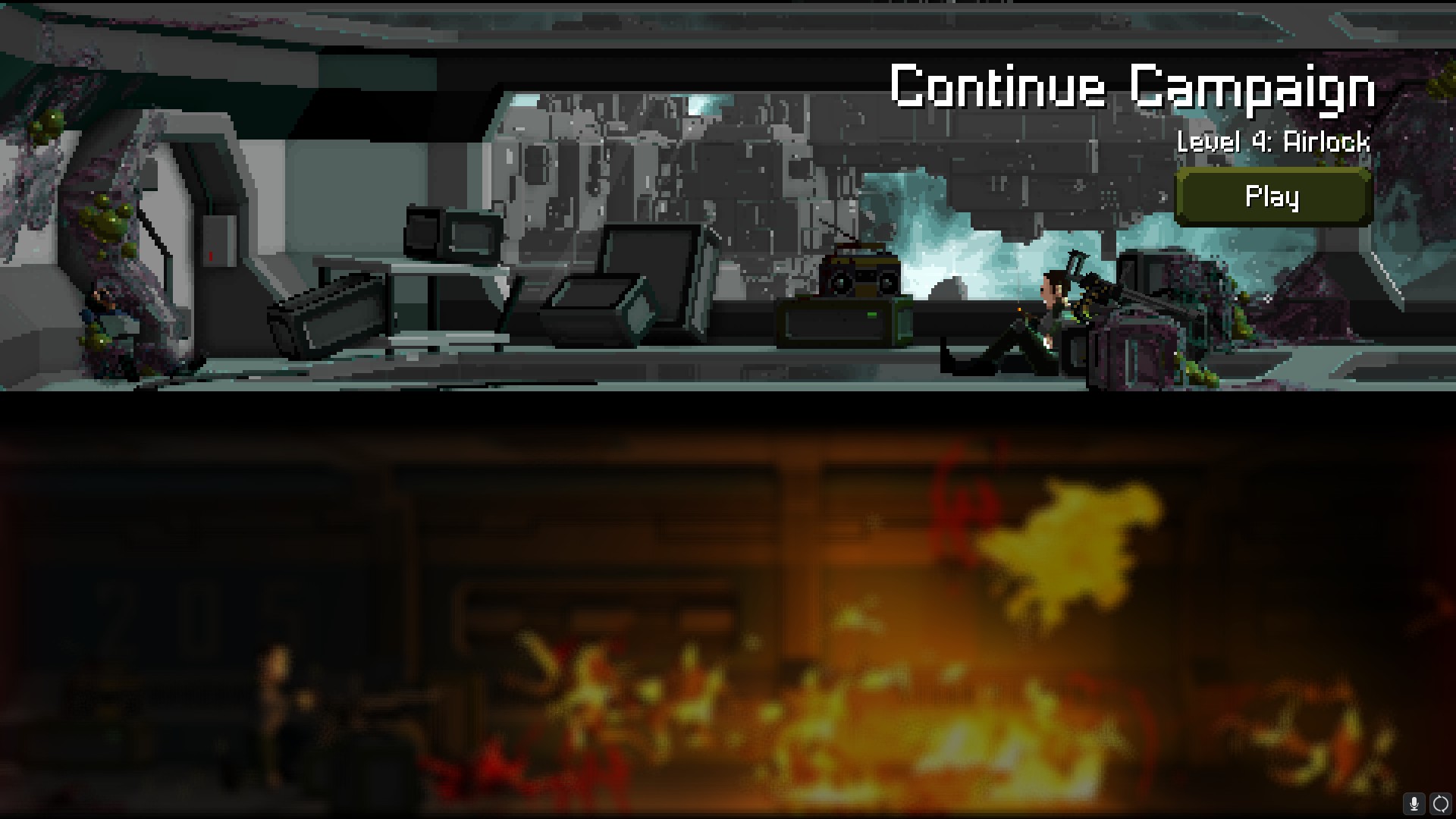 There are only minimal graphics options: windowed/full-screen mode and a single slider for ‘performance’.

The music in Let Them Come is exceptional. The soundtrack features 18 tracks from a handful of different artists; you start with three available and unlock another three in each of the five campaign levels. They range from slow-paced ambient-style tracks to thumping grungy electronic beats, but they all fit the action and setting well. The game also lets you set up your own playlist, so if you don’t like any of them then you can exclude them as you wish.

Sound effects within the game don’t have high enough impact in my opinion. Bullets sound muted, as do Rock’s grunts, and most of the explosive weapons also sound a bit weak. The sound is good enough but could have been better.

Let Them Come is an extremely simple shooter; your character doesn’t even move!

The game starts with Rock flicking away his cigarette and grabbing hold of his tripod-mounted machine gun on the left of the screen. From the right come wave after wave of mutants and it’s your job to aim the crosshairs and pull the trigger. And that’s basically it: a shooting range. 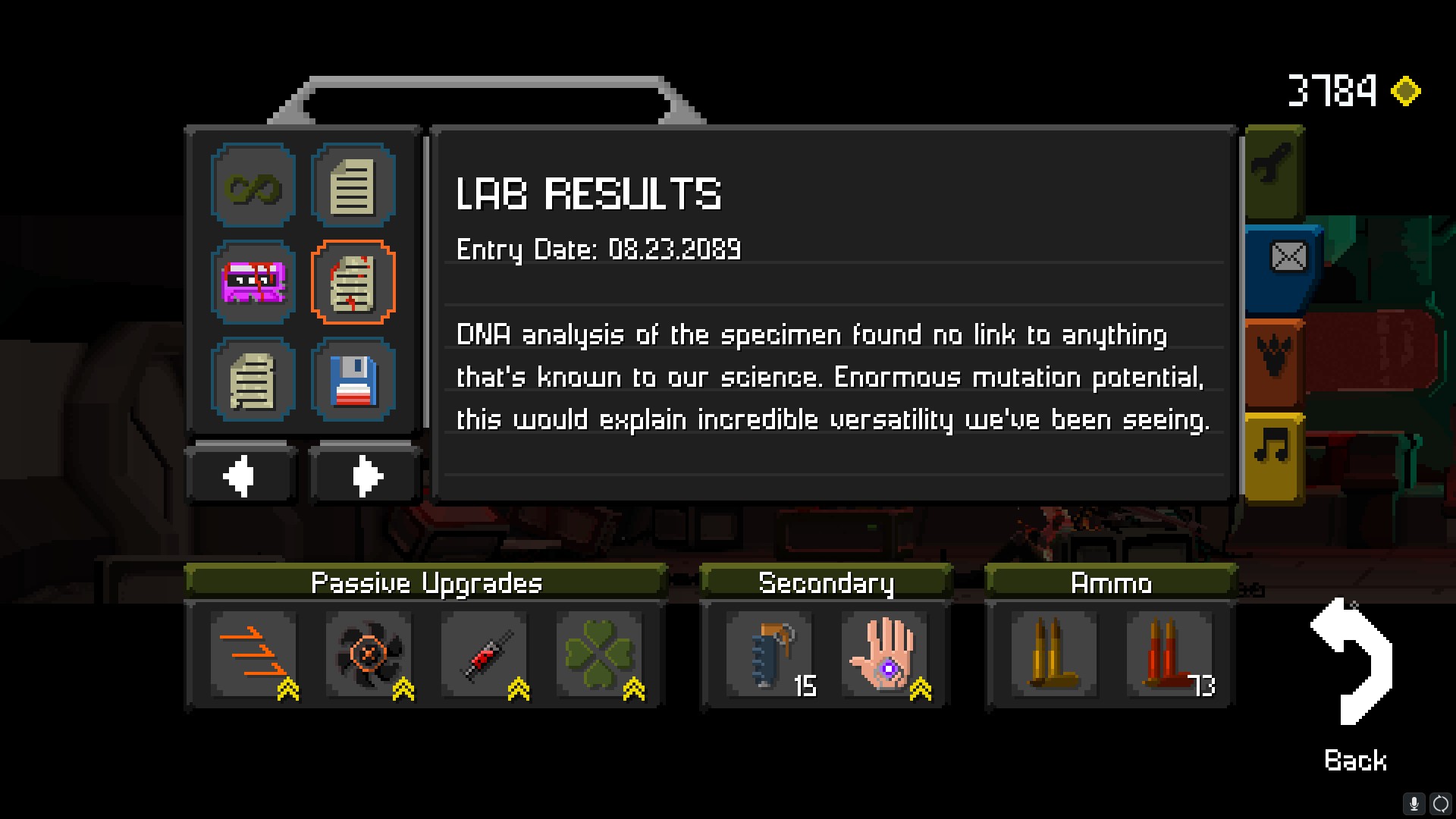 As you kill enemies you gain coins, presumably as a bounty from your employer. These you can spend to unlock passive abilities, ammunition types for your machine gun, and grenades and melee weapons. All of these items are unlocked at the beginning, and there are no further unlockable items, though passive abilities and melee weapons are upgradable with cash as you progress further through the game. There are some areas where a particular ammo type or melee weapon is particularly useful, but you can get through most of the game with the best melee weapon and the starting (unlimited) ammunition type.

There are over 100 waves, divided across five areas of the ship, each one culminating in a boss. You can make as many attempts as you like; each time Rock dies he keeps the credits collected and restarts at the beginning of the wave in which he died. If that’s the same wave in which he died previously, you can choose a ‘lifeline’: either shuffle the enemies in the wave around or, more usefully, start the wave with a random bonus. Unfortunately, this only holds true in the normal, non-boss waves, and the bosses are where you really need it. 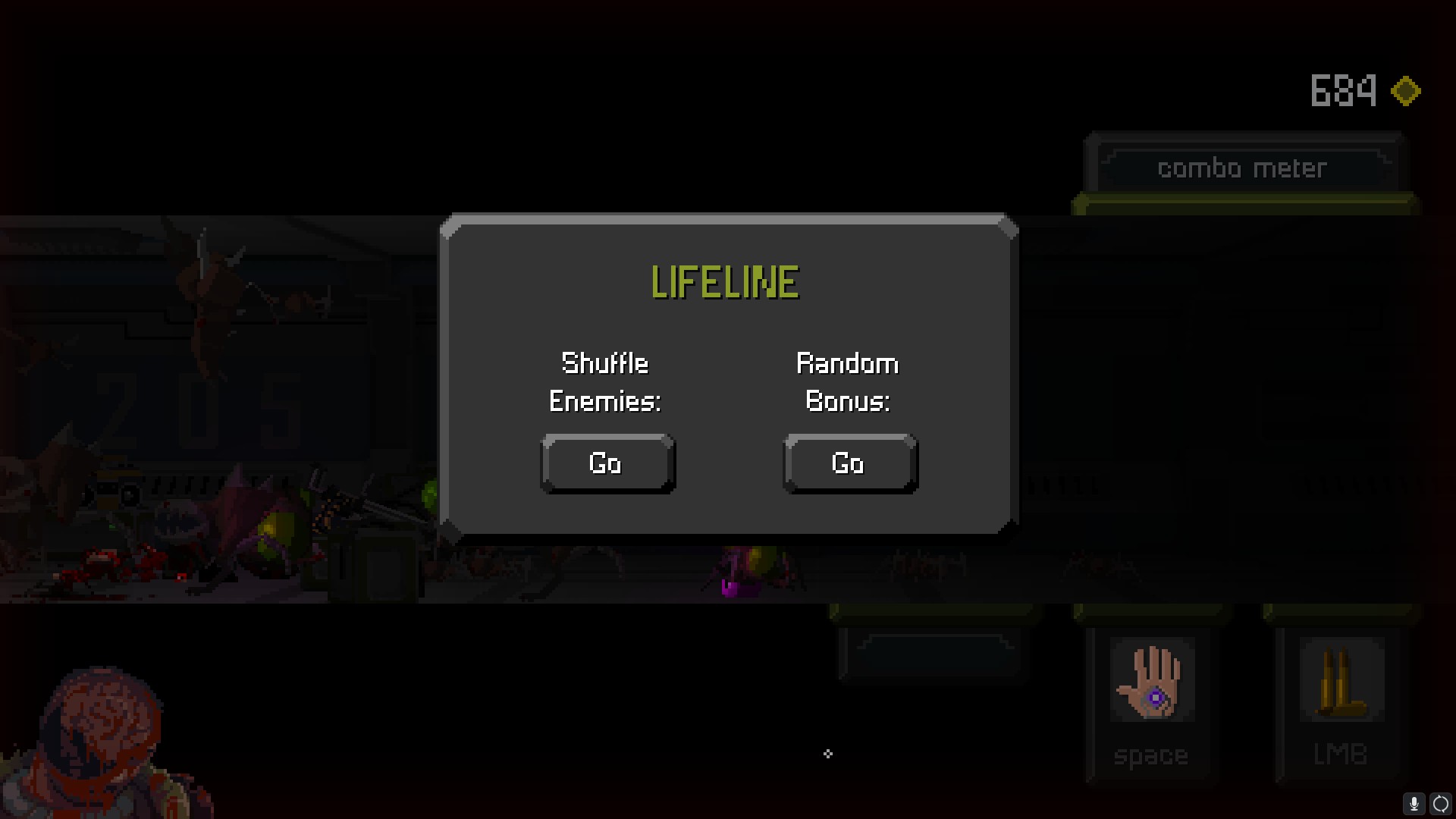 As well as the story/campaign mode, the game includes three challenge modes: rampage (online high score), boss fight, and Twitch challenges. These don’t really interest me, but they do provide some replayability, as does the New Game + mode that opens up after you’ve completed the campaign once, allowing you to start again with all of your purchased equipment.

While the core gameplay is very simple, it’s also a lot of fun. The bosses can be frustrating, especially since you’re unable to go back and repeat earlier waves to collect more credits if you find yourself running short, and in some ways, I think it would be a better game without them. But once you get the hang of them they’re actually not that difficult.

The game does have some balance issues, though. It’s possible to become effectively stuck in the campaign mode if you spend all your money shortly before a boss and don’t have funds to replenish the only weapon types that will work against that boss. I almost had this trouble with the third boss, Crawler, which requires explosives and armour-piercing rounds to kill. In this case if you don’t have the funds to buy what you need, it’s extremely slow going trying to build them up again, and there’s no obvious way to restart the campaign. 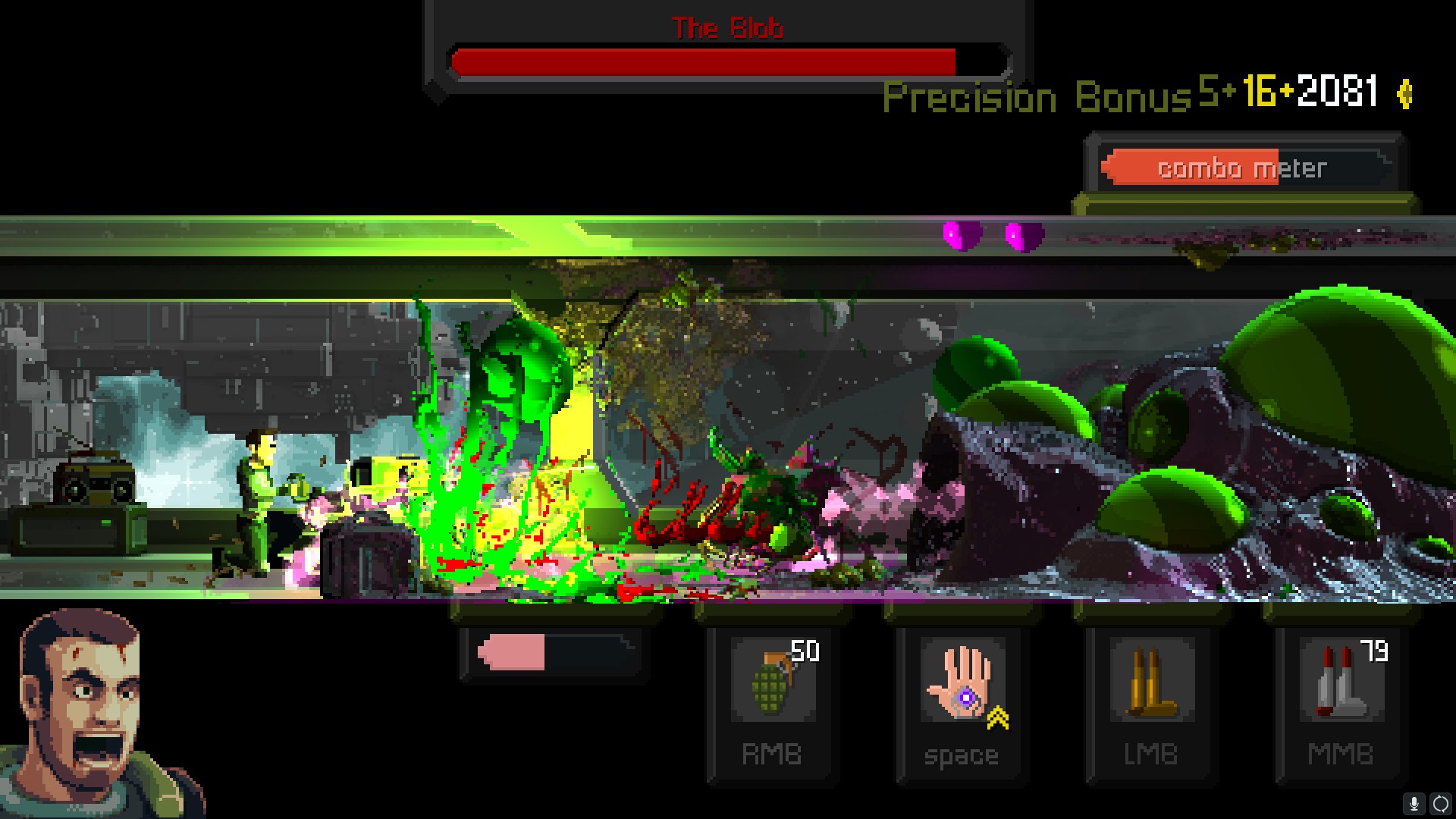 Ammunition and weapon restock prices don’t make sense, either. Why does ice ammo cost $300 to unlock with 50 free shots, but then $750 to restock 50 shots again later!?

Finally, it’s a shame there aren’t more items and weapons to discover as you play. Later levels allow you unlock a couple of upgrades for some of the purchasable items, but once you’ve seen what there is to offer at the start, you’ve basically seen it all.

Let Them Come is a fine example of style over substance; the game does only one thing, but it does it well and looks and sounds very nice while it does it. The game’s presentation is top notch, but the gameplay is very repetitive. Though there are over 100 waves the game is also quite short.

That said, the pixel graphics are fine, the music is even better, and if you’re in the mood for some completely mindless shooting then Let Them Come should certainly scratch that itch for a couple of hours. And for the price, you can’t really go wrong.