Community Inc is a new entry in the city-building genre. Can you create a thriving and happy community — and then sell it for maximum profit?

Community Inc is a city-building game and the debut title from T4 Interactive, published by tinyBuild.

You take the role of the manager of a new community for Community Inc, a company owned by one of the nine known races, the Lings. Your job is to build up the community from scratch and ideally meet the eight core requirements to enable you to sell the community for maximum profit.

Each community is formed on a new world, with a portal to elsewhere through which Lings, visitors from the other eight races, hostile interlopers, and your initial materials are transported. The other races all start off relatively friendly with you, but each has a rival, and doing business with one will displease the other. Displease them enough and they’ll attack your community, which isn’t good for profits.

As you grow your community you can also trade with visitors and complete contracts for the other races to gain extra currency, known simply as Surplus. This can be used to hire more Lings or buy technology, or a portion of it can be transferred to your new community once you decide to sell.

It’s not easy managing a community of Lings, but as the game says, “Remember, if everything goes wrong just sell your community and start again.”

Community Inc‘s graphics are 3D, with free camera rotation and panning, including a sort of zoom based on camera height. The whole interface is a bit fiddly, and not just the camera controls, but once you get used to it it’s not too hard to position the camera where you want. Don’t lower the camera height too much, though, or you’ll see underneath the terrain, which is apparently very thin and floating on water. Who knew!? 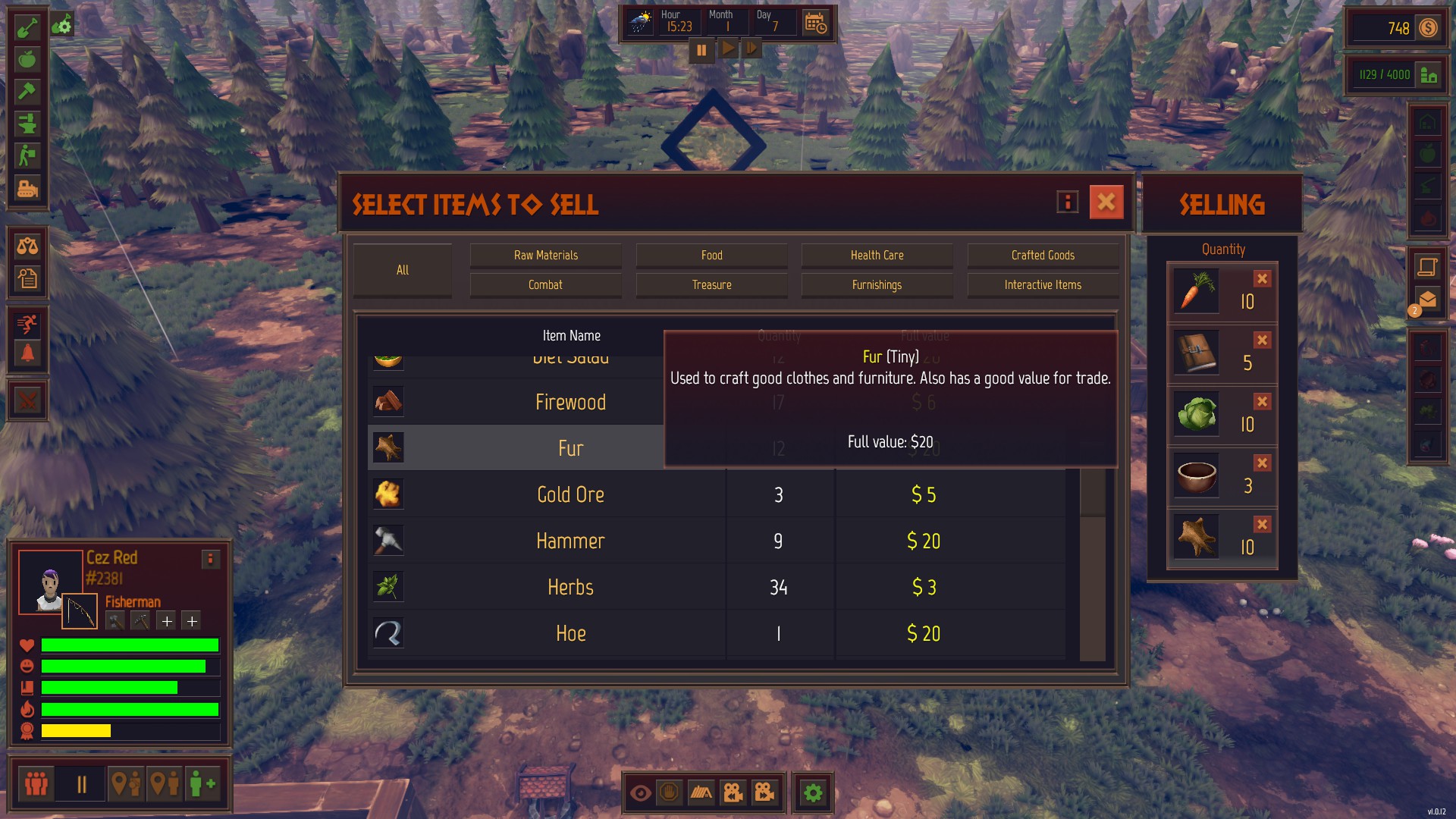 The worlds all seem to look the same, with a sort of temperate forest feel, complete with grass, boulders, and pine-like trees. It mostly looks quite nice, though it’s a shame there’s no variation in biomes between different portals. Weather effects are okay, though not fantastic, but the dynamic light and lengthening shadows as each day progresses are very well done. Building and object graphics are well modeled and textured, but there’s not a lot of them. My real-life chickens would be very jealous; the size of the chicken run gives Free Range a whole new meaning!

Character graphics look nice at a distance but appear blocky and quite bland when you zoom in close. Characters do have some personality, though, made more evident by the hard-to-read speech bubbles that appear when they converse with each other. Animations, too, look quite well done at range, but when you zoom in it’s obvious that they don’t quite fit, with builders repeating the same frames over and over as they stand a few steps away from what they’re supposed to be building. 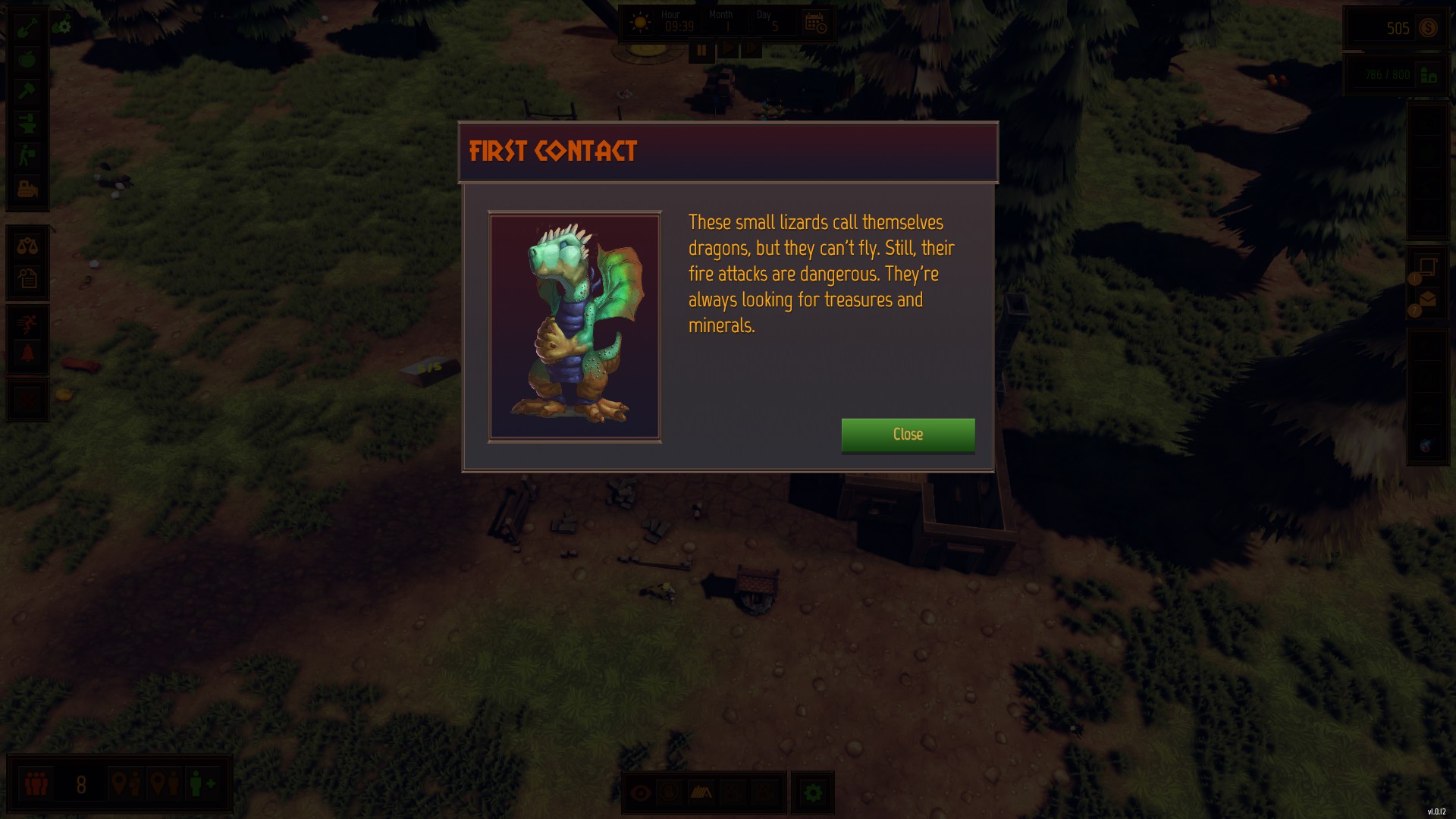 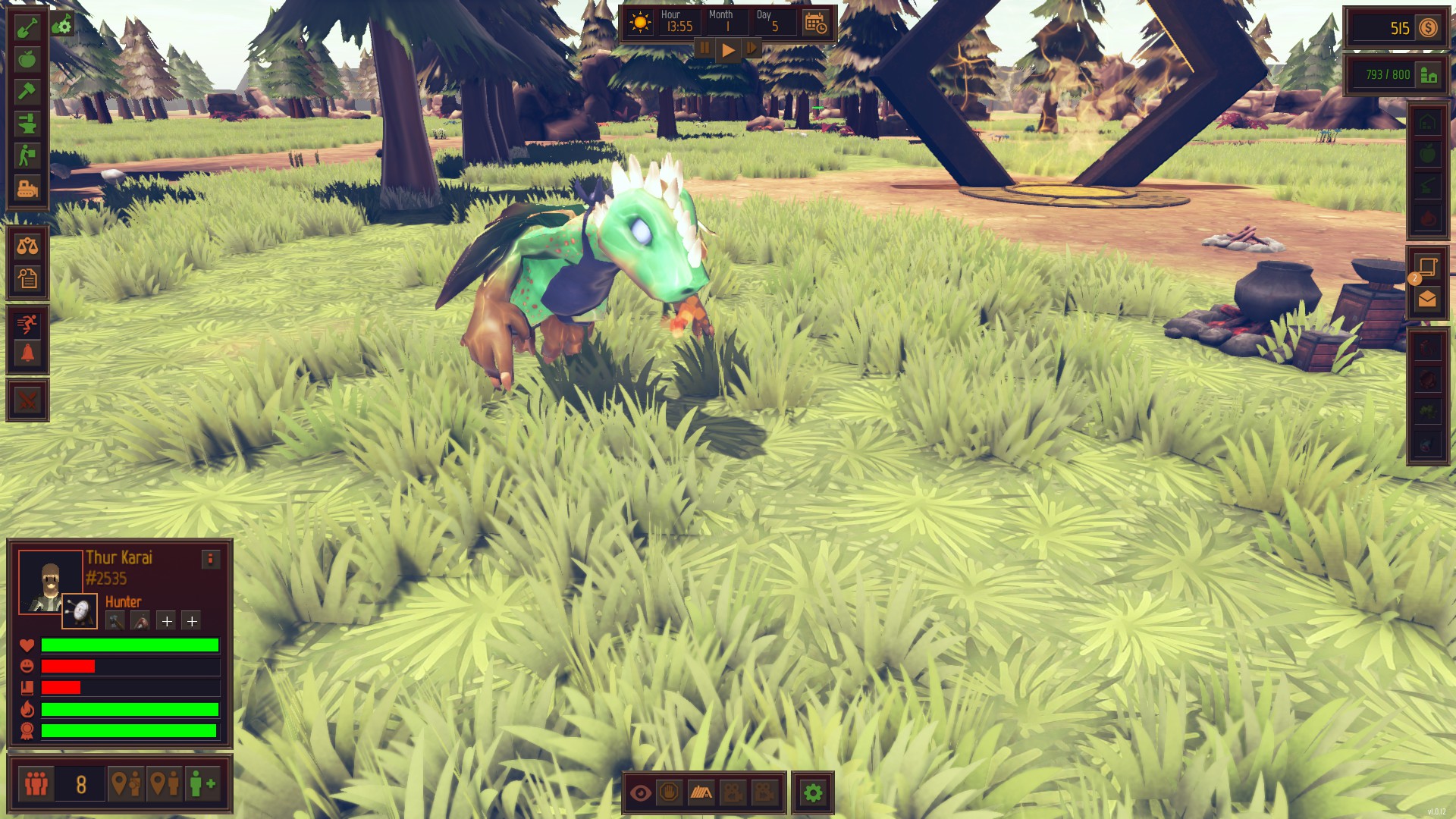 There are many graphics options, but the settings aren’t explained; what do low, medium, and high mean for vsync, for example?

I think there are only two music tracks: a minimalistic slow, calm track played through most of the game that quickly becomes repetitive and fades into the background, and a higher-tempo, more frantic tune played in combat. They’re acceptable, but not exceptional.

Sound effects are volume-normalized and appropriate to the setting. Again there’s nothing special and nothing terrible about them, though I did find the ‘not allowed’ sound, played when you can’t do something for some other reason, a bit out of place.

There are no voices. Some ‘Simish’ style gabbling, altered for the different races, would have fit in well. 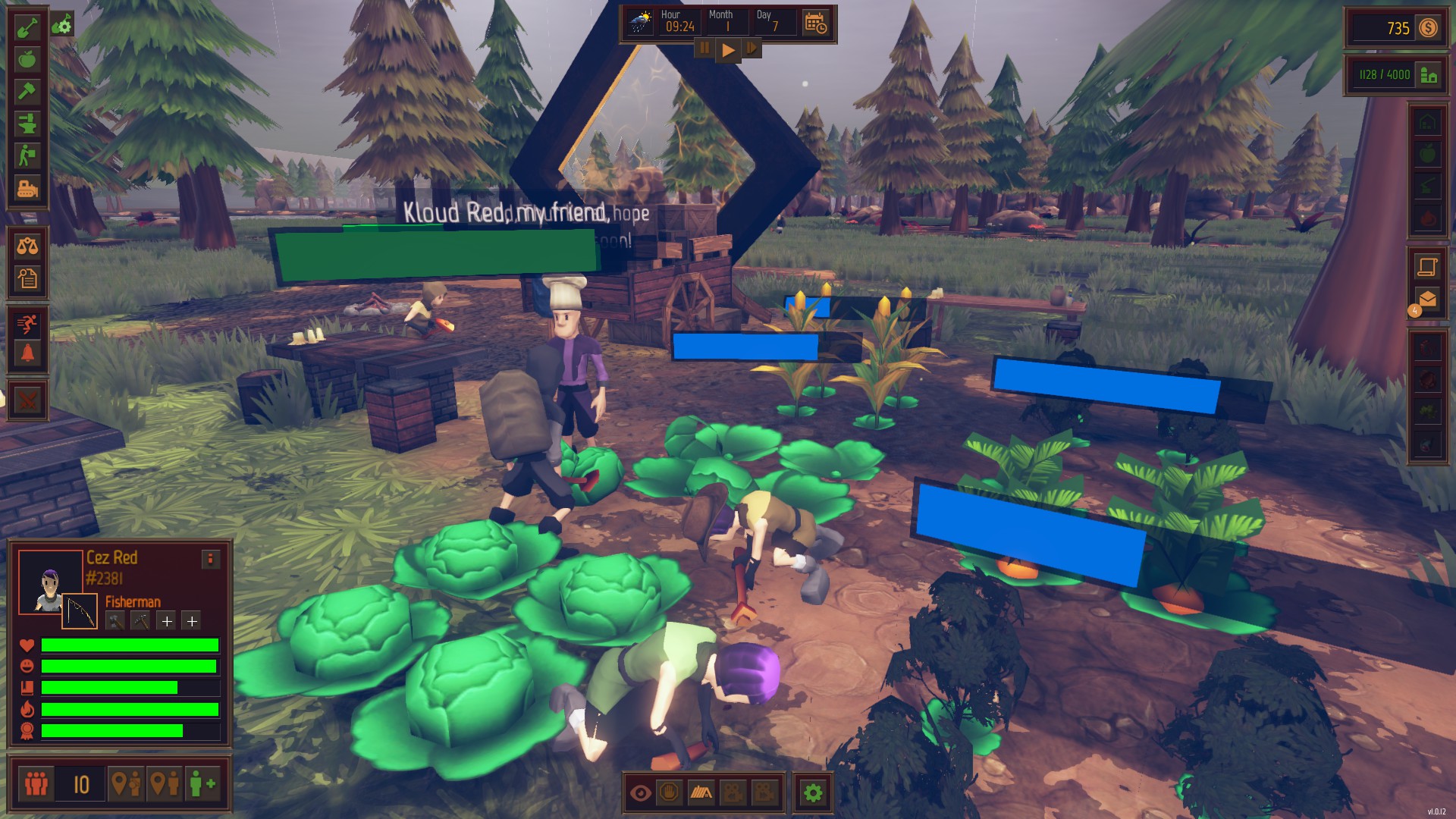 The basic gameplay is that of a typical city builder: zoom the camera around with WASD, rotating and zooming with the mouse (much better than the hotkeys), as you hire workers to farm, harvest, mine, build, and craft, growing your community from nothing. The game comes with three short tutorials that introduce the basics, but after that, you’re on your own. 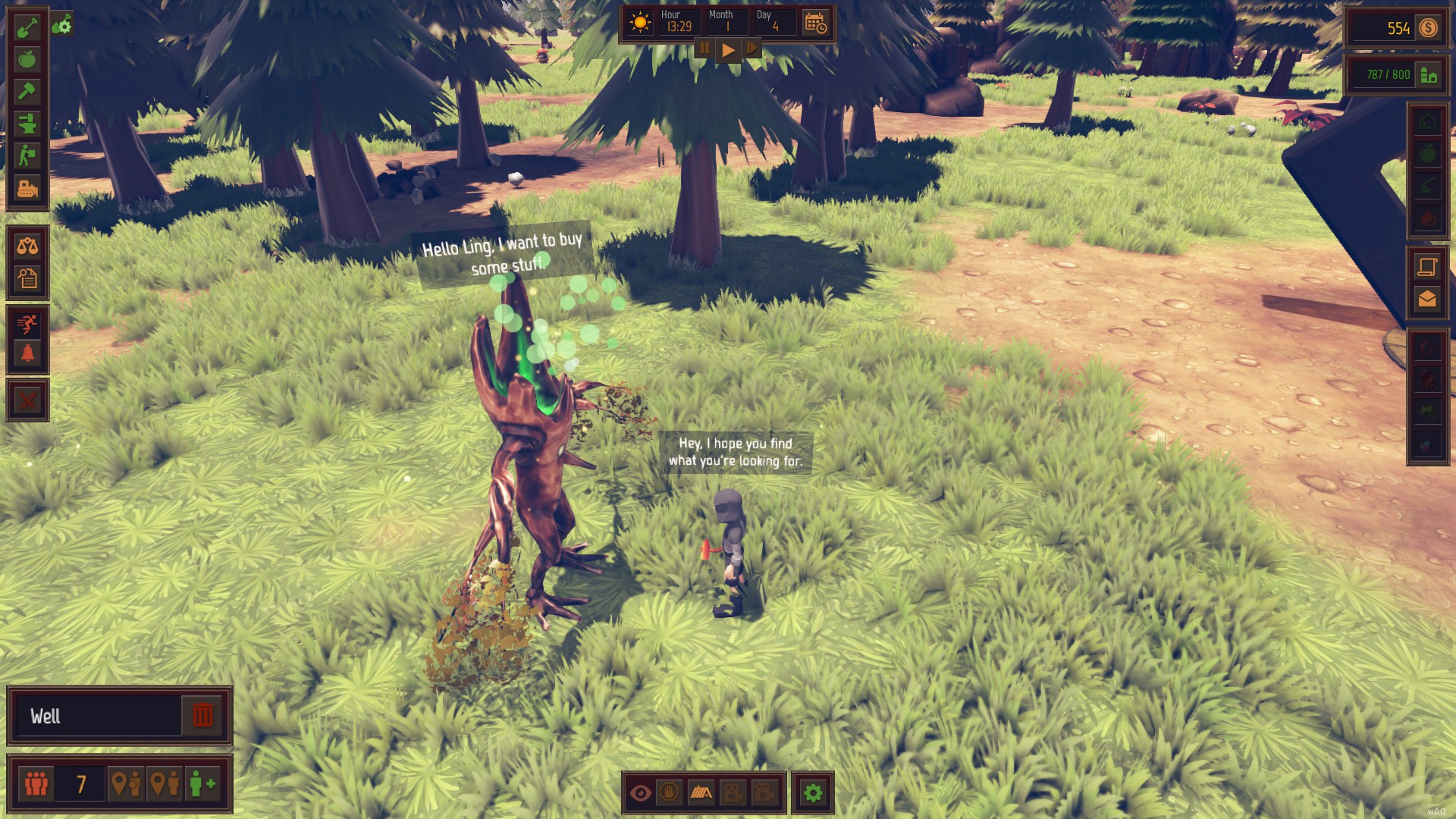 Each Ling starts as a builder but can have five professions. All the usual suspects are here: lumberjacks, miners, farmers, builders, guards, etc. There are 16 professions in all. Lings gain experience in their active professions, leveling up after a certain amount of use. It’s not obvious what professions are needed sometimes, though, as they’re not described well. It’s also not clear which advanced professions still allow actions from the basic ones; it seems that most don’t, so, for example, a carpenter won’t revert to lumberjack duties automatically if there’s nothing queued for him to craft. 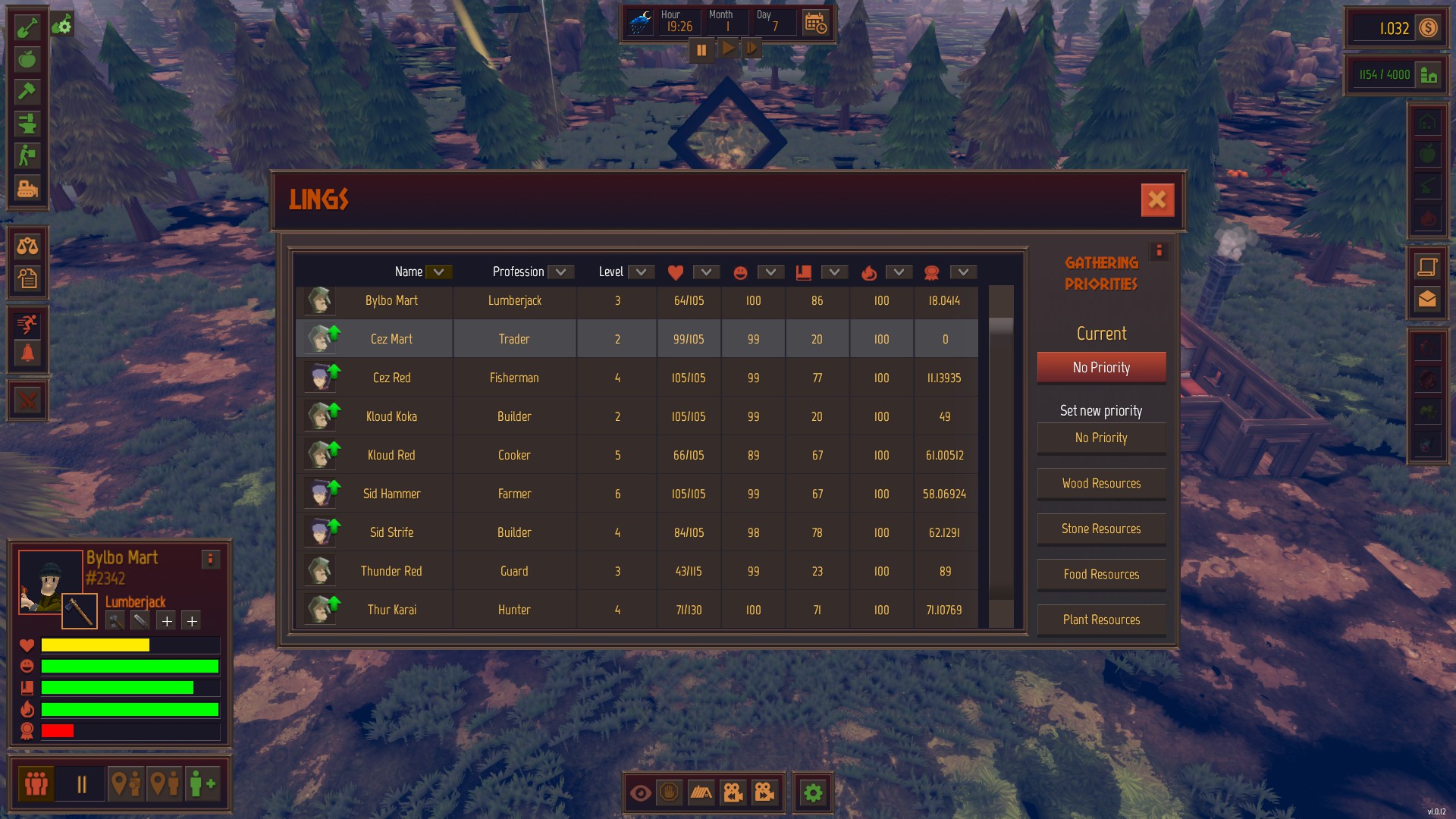 Alongside the people and professions, the core of any city-building game is the building, and this is where Community Inc starts to falter. There are only a few buildings available, and even fewer of interest when you realize that about half of them serve only a single function: housing. This is made even less enticing once you notice that, in spite of you having built lovely houses and placed furniture inside them, half your Lings will still choose to sleep outside in the rain and then be miserable because of it. The other buildings include a few different shop types, three different animal corrals for farming, a warehouse, and a couple of other incidentals. It really is a disappointing range.

Crafting is better, with a much larger range of items available to make, with various prerequisites, but once you have your food supplies and building materials set up, and you’ve made profession-specific tools for all of your Lings, it’s only the poorly designed system which won’t let you set up ongoing crafting as resources arrive, or crafting schedules to meet your demands, that will keep you coming back to the crafting screen regularly to keep your supplies topped up. 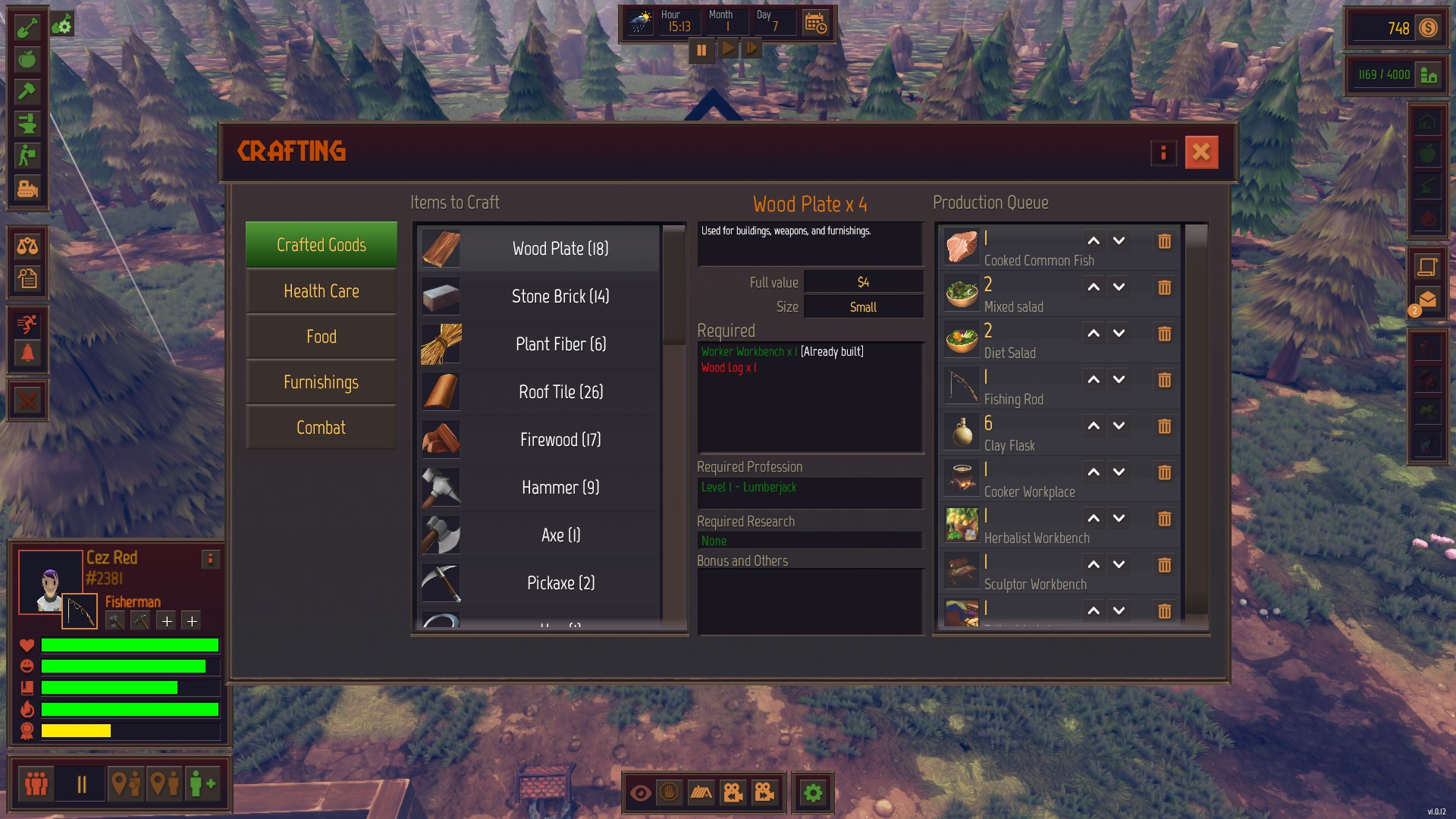 There are some welcome inclusions to the genre, such as random traits for each Ling you hire, and the ‘endless’ gameplay that’s enabled by being able to sell your community at any time and start again with the profits, but there’s just not enough content here to justify doing so. Other components need significantly more work. These include ‘research’, which in this case is just spending Surplus to buy a crafting prerequisite; fires and wells, which for some reason can only be operated by builders; and the painful guarding and combat system, in which only ‘guard’ type Lings can fight, and even then only when they decide to listen to you, while everyone else in the community drops everything they’re doing to huddle defenceless in the centre of the village. 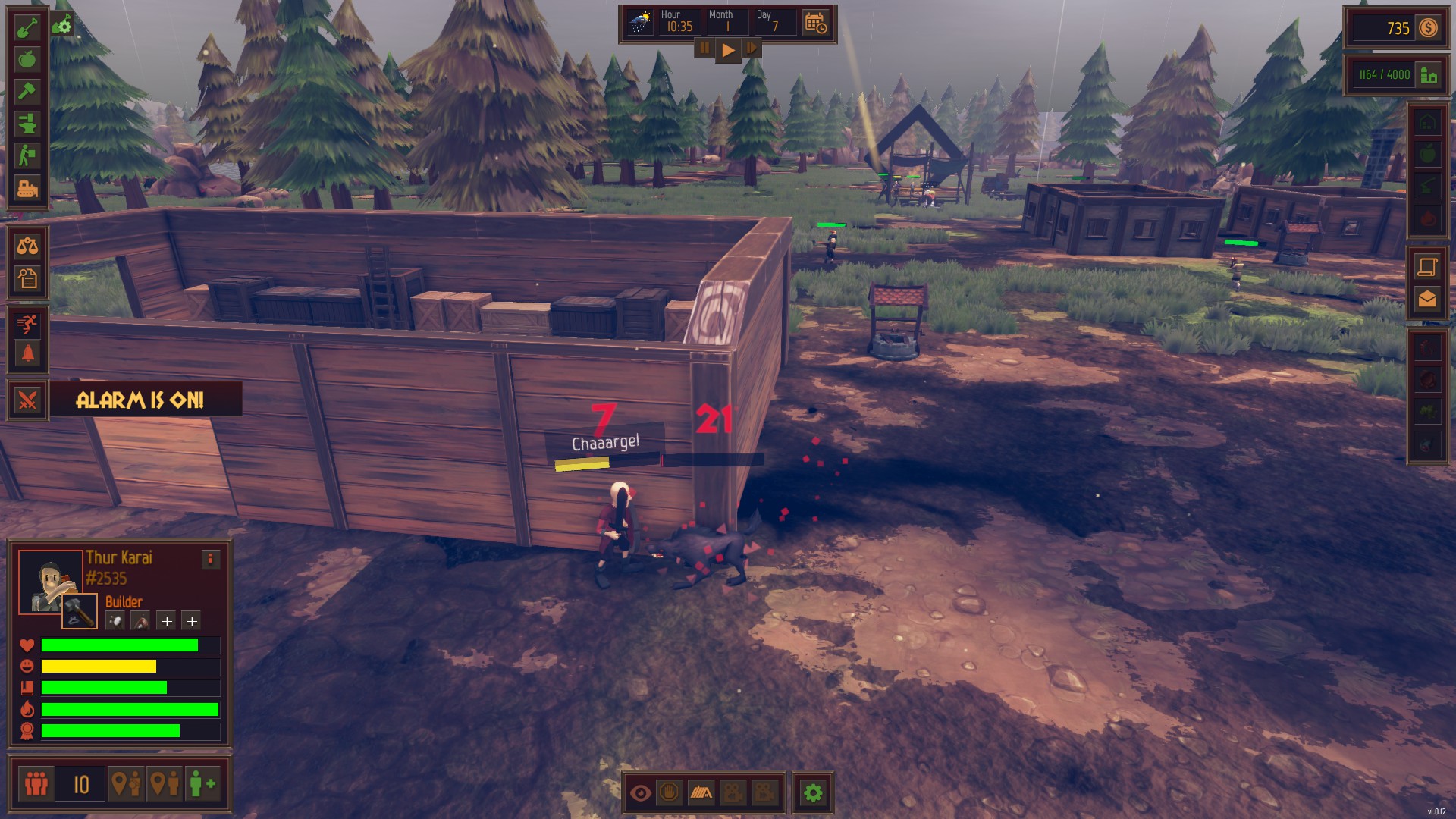 The game is also rather buggy for a full release, making me wonder why it didn’t go through an Early Access period to iron out at least some of the issues. Some of the most obvious problems I saw were the broken pathing, guard AI, camera controls, and alarm button; the inexplicable restrictions on building placement; and the aforementioned affinity for outdoor camping, even when much more comfortable bedding is available. Oh, and the grammar, while it seemed mostly acceptable, to begin with, became steadily worse as I saw more of the game. 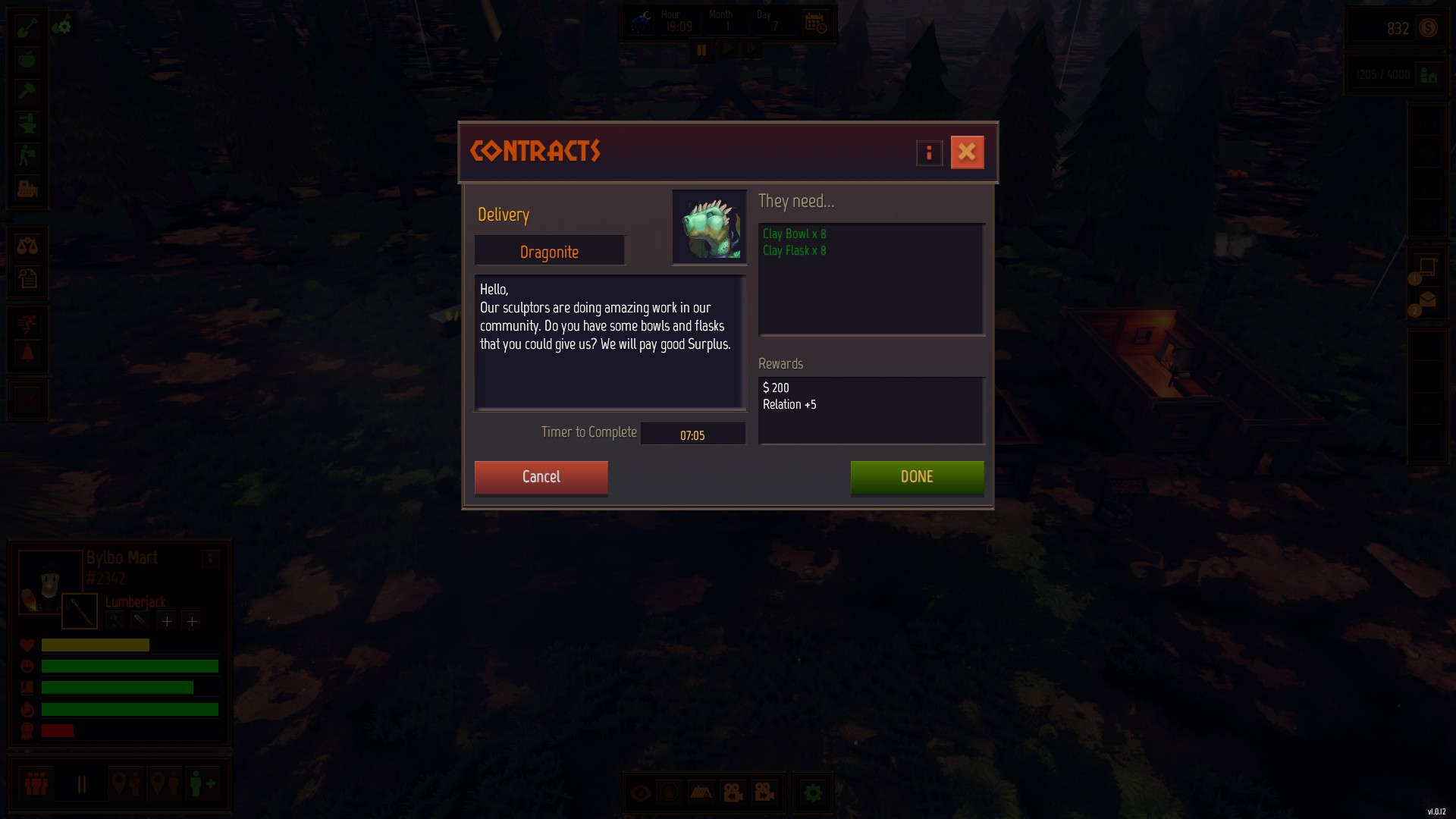 I’m on the fence with Community Inc. On the one hand, it has heart, pretty graphics, pleasant sound, and core gameplay and ideas that are sound and enjoyable, but on the other, it has very limited content, dire combat, and rather too many bugs for a game that isn’t in Early Access.

I’m leaning towards recommending it, but as it stands now, there are definitely better city builders available. You might do well to wait another couple of months and see if it continues to improve. 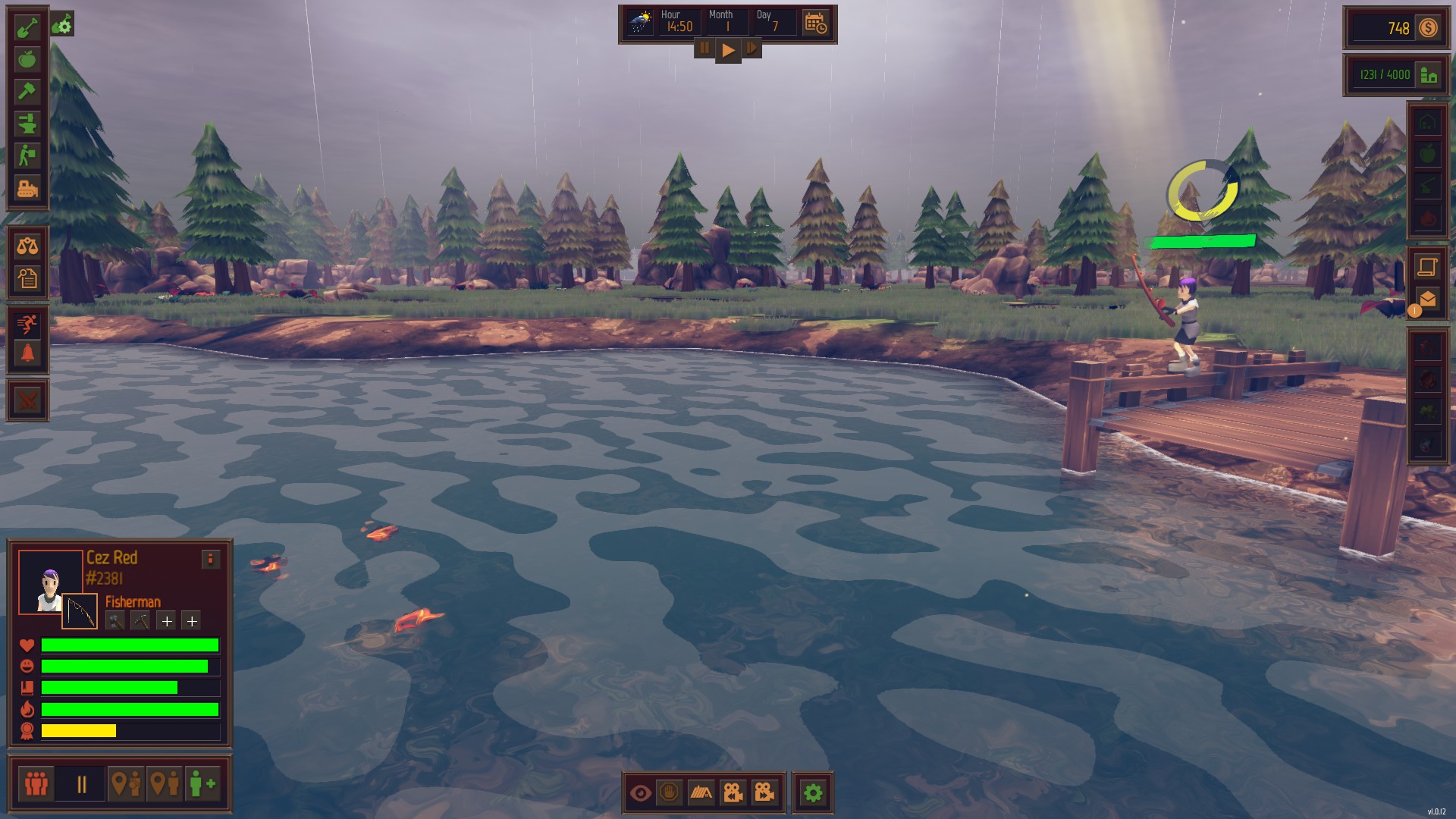