Citadel: Forged with Fire is a huge Early Access fantasy sandbox game, complete with combat, crafting, building, taming, and a beautiful world to do it all in.

Citadel: Forged with Fire is a fantasy RPG sandbox from Blue Isle Studios and Virtual Basement.

In Citadel, you play a new apprentice magic user, waking inside a fiery magic circle within a ruined stronghold: one of the safe zones of the fantasy world of Ignus. You begin the game with literally nothing but your tattered clothes: no weapons, no spells, no abilities, and no instructions, save for the few brief tutorial-like snippets carved into the rocks scattered about the safe zones.

You quickly find that interacting with the world around you — picking up items, crafting, building, and fighting — provides you with experience, and before long you’ve gained a few levels, chosen your preferred weapon type (glove, wand, staff, or melee), and crafted your first weapon, learned some crafting recipes, and maybe even started to build your first home. Perhaps Ignus isn’t so big and scary after all.

Hold on. Is that a giant? Run!

Citadel uses Unreal Engine 4 and, as you might expect for a game made with this engine, some of the graphics are superb. Trees and other flora look wonderful and are placed in a lifelike manner. Heavily forested areas give way to small clearings, and grassy plains dotted with boulders lead into steep hills. The terrain is variable and appropriate to the setting with plenty of realism. Building and crafting models and textures, too, are very nice, though necessarily 3D-tile-based. 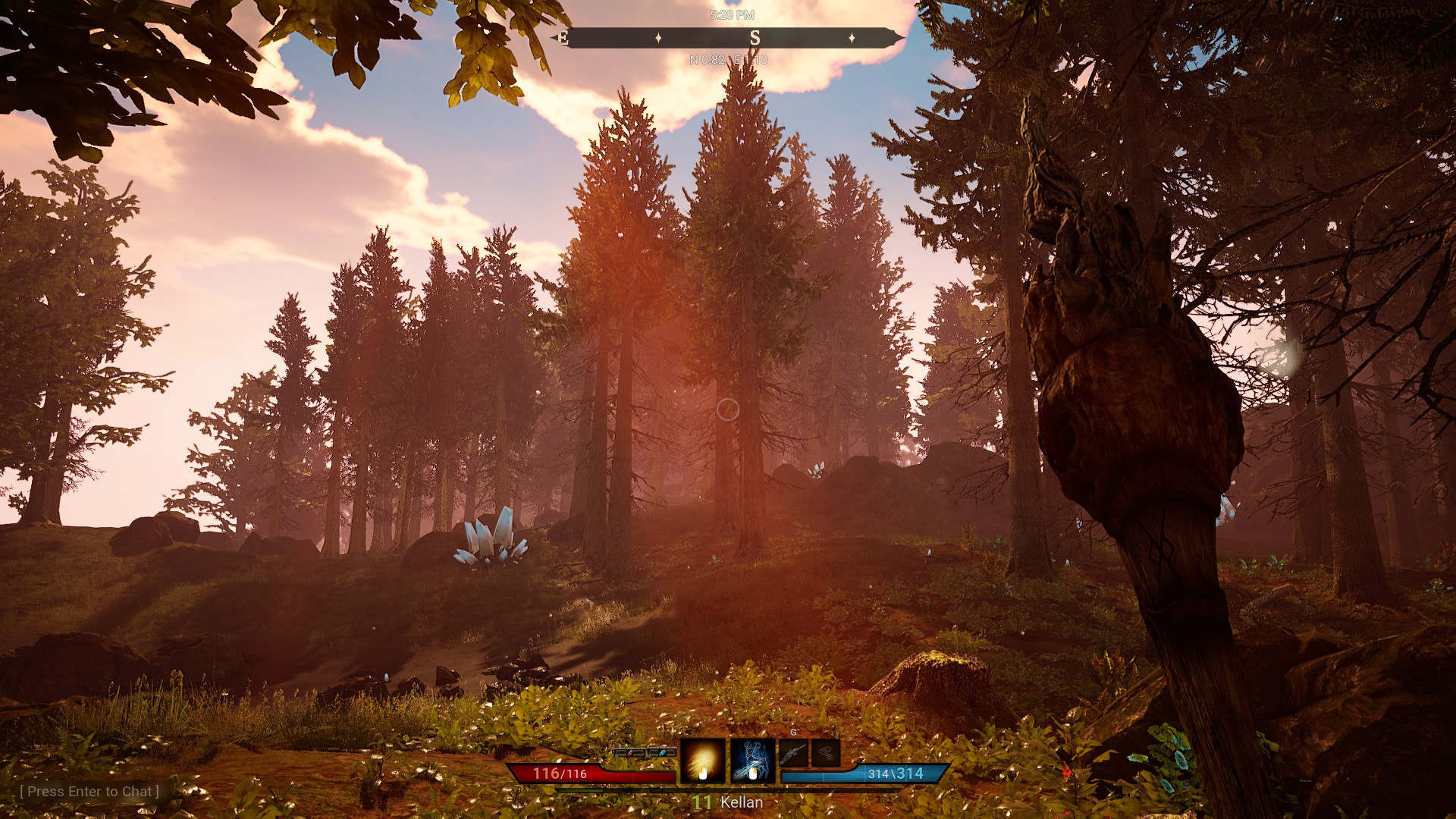 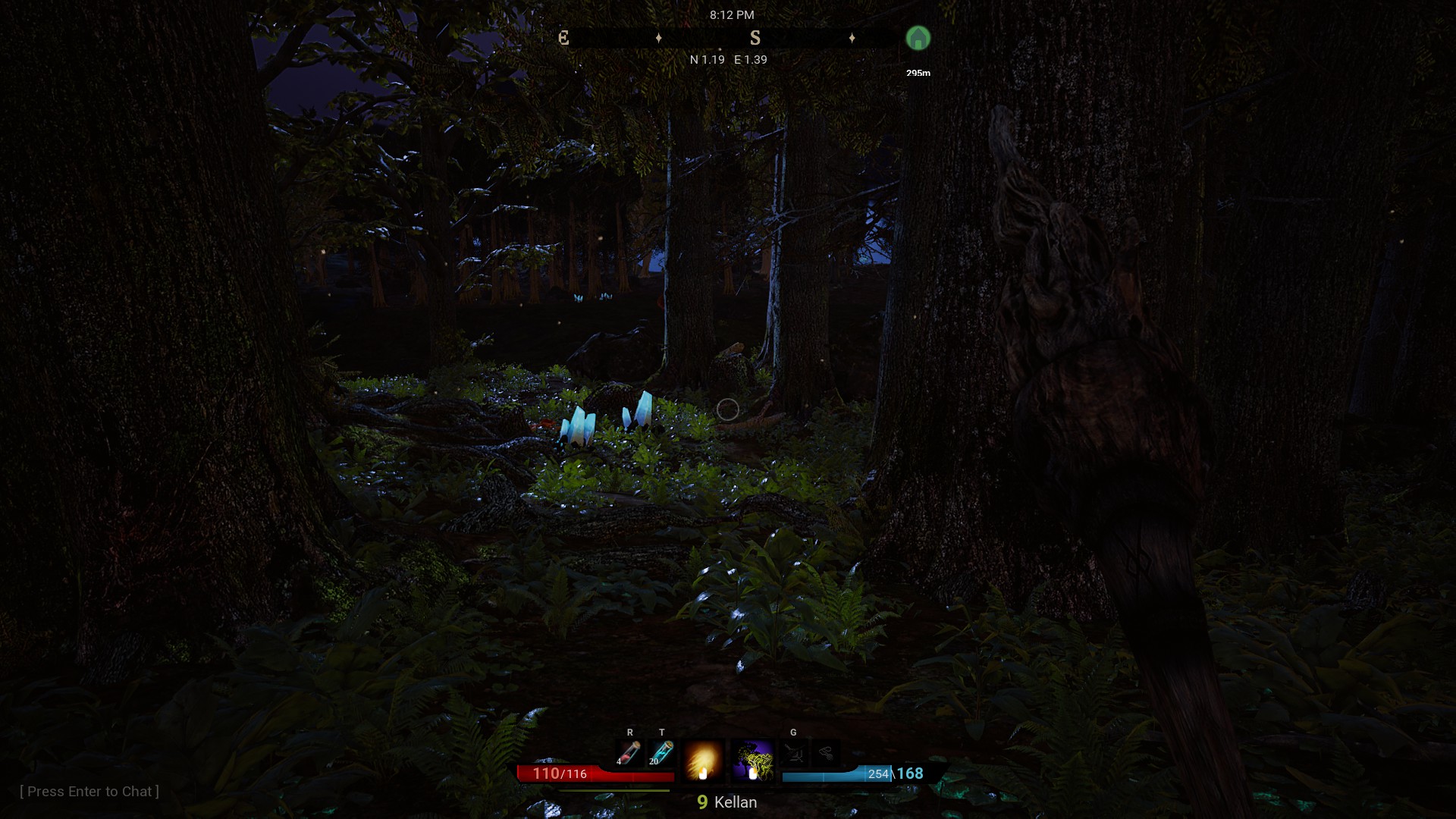 Most creatures you encounter are well modeled, too, with high-resolution textures and significant variation in both size and shape. It’s often disappointing, though, when you see them move. Many of the animations seem to have very low frame counts and end up looking quite crude and wooden. This carries through to the player character graphics, too; these are probably the biggest let down to the visuals, with very few character generation choices, poorly modeled and animated characters, and terrible animation blending. Though you can change between first- and third-person view, at this stage I’d recommend you don’t; the character animations are laughable. 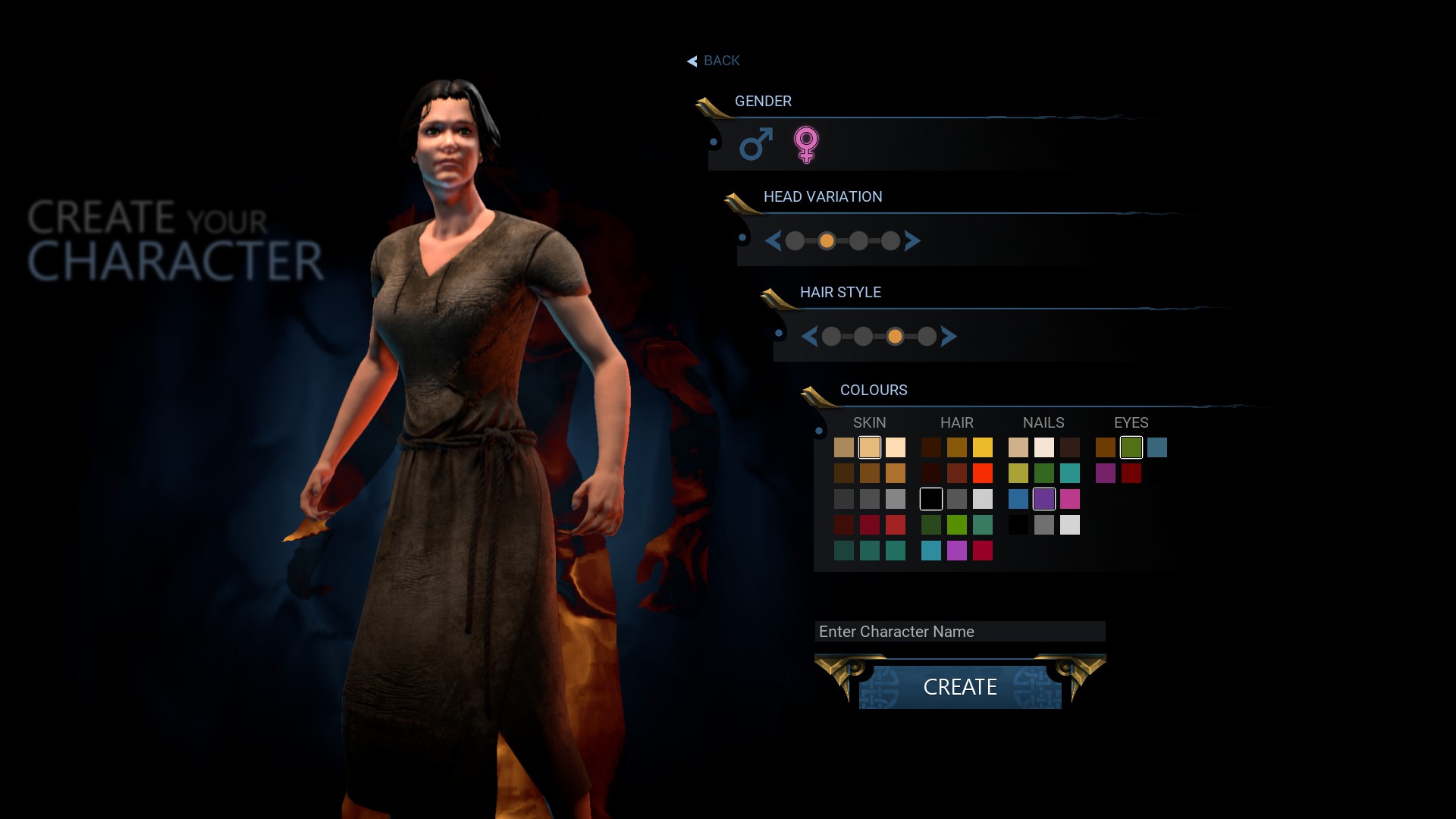 Special effects are excellent, with powerful fireballs, undulating light rays, and the like. The water looks mostly very pretty with gentle wave animations, but reflections and shadows often don’t look right at all. There’s a large viewing distance, but noticeable pop-in at different stages for different objects, making things look a bit weird at times. 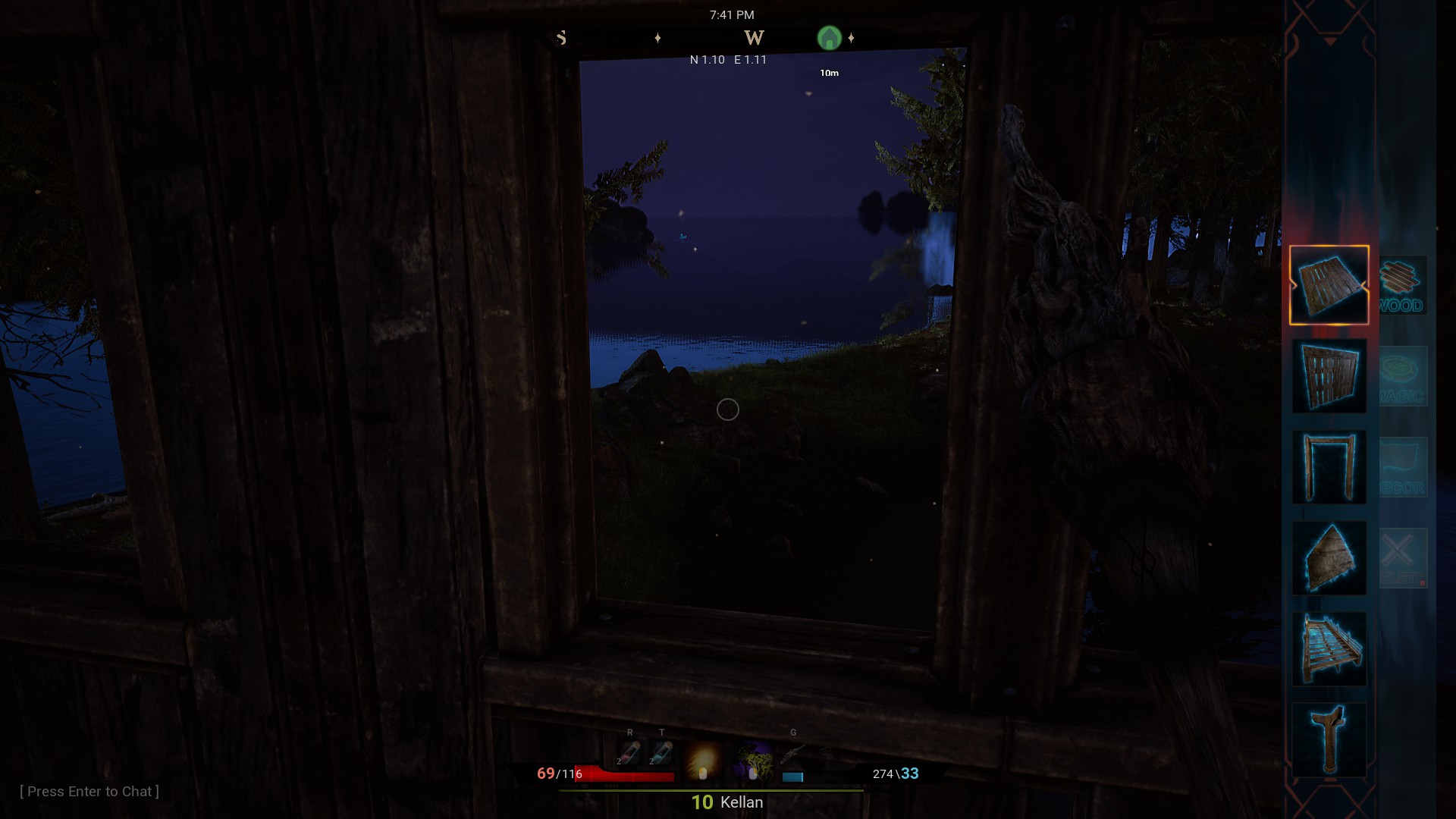 The interface is a bit fiddly but consistent and functional. There are plenty of detail options; being Unreal, it gives my video card fan a workout regardless.

There’s not much music in Citadel. The title theme is typical of the genre, but it’s well produced and appropriate. In-game music isn’t really music; it’s more like a gentle sort of repetitive ambient trilling. It sounds much better than I’ve described it, really, and it prevents the game from feeling lonely.

Sound effects are good, with big explosions and other magical effects, typical tool-like crafting sounds, and good aural feedback when building and placing items. Creature sounds are good, too, but more variation in character sounds wouldn’t go astray; usually, you see you’re being attacked due to the screen effects before you notice the rather lackluster “Oof.”

There is no speech.

Citadel is a fantasy world sandbox. You start with nothing, grind a few levels to learn some abilities and recipes for crafting and building, and then you do what you want to do; there are no set goals, no quests, and, from what I’ve seen, no storyline, or at least not yet. If you don’t like setting your own goals and making your own way, then Citadel isn’t the game for you.

Living in Ignus is all about gathering resources. Certain plants and magic crystals can be used to make health and mana potions. Other plants can be turned into cloth, which can be made stronger with a tailoring bench. Wood and stone can be used to make weapons, as well as to build a house to keep you safe from wandering creatures and give you somewhere to craft other things. Other resources can be taken from dead creatures or extracted from the world. 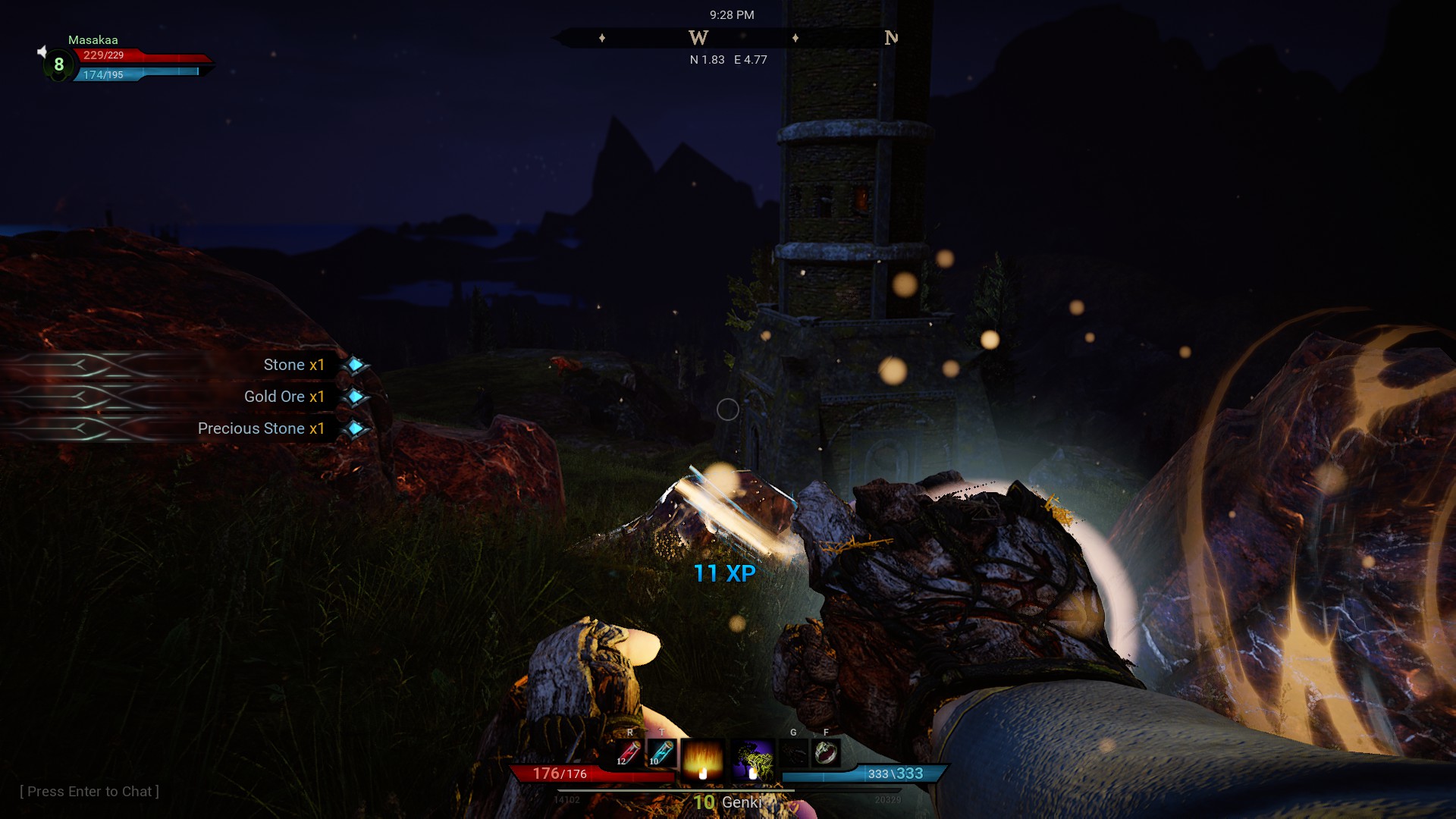 As you play you gain levels, and as you gain levels you earn both character points to spend on your four basic characteristics (mana, health, damage, and carrying capacity) and knowledge points to unlock spells and recipes for crafting and building. You gain experience for gathering resources, crafting, building, and fighting, so the more you do all of these things the faster you gain levels, and access to more and better things. You choose entirely where to focus your knowledge and thus how to spend your time in the game. 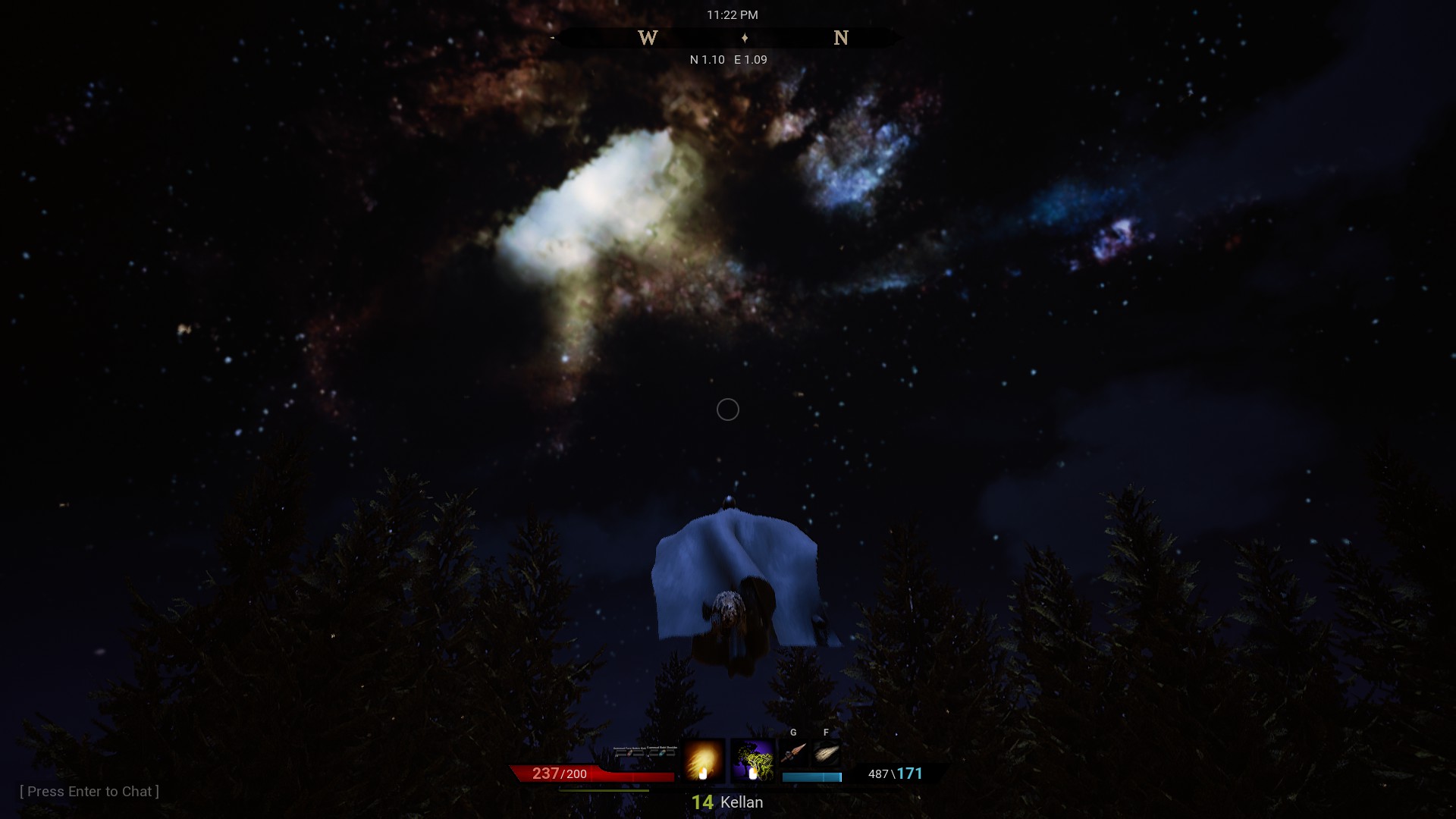 Combat, though it can be fun, is more limited than most action RPGs. You have two quick slots, one accessory slot, a few armor slots, and two alternate weapon slots, each of which can only have up to two spells equipped, bound to the left and right mouse buttons. So while there are quite a few cool spells and options, you’re practically limited to using a very small number of them at any one time. Taming wild animals and giving them silly names does help, though. 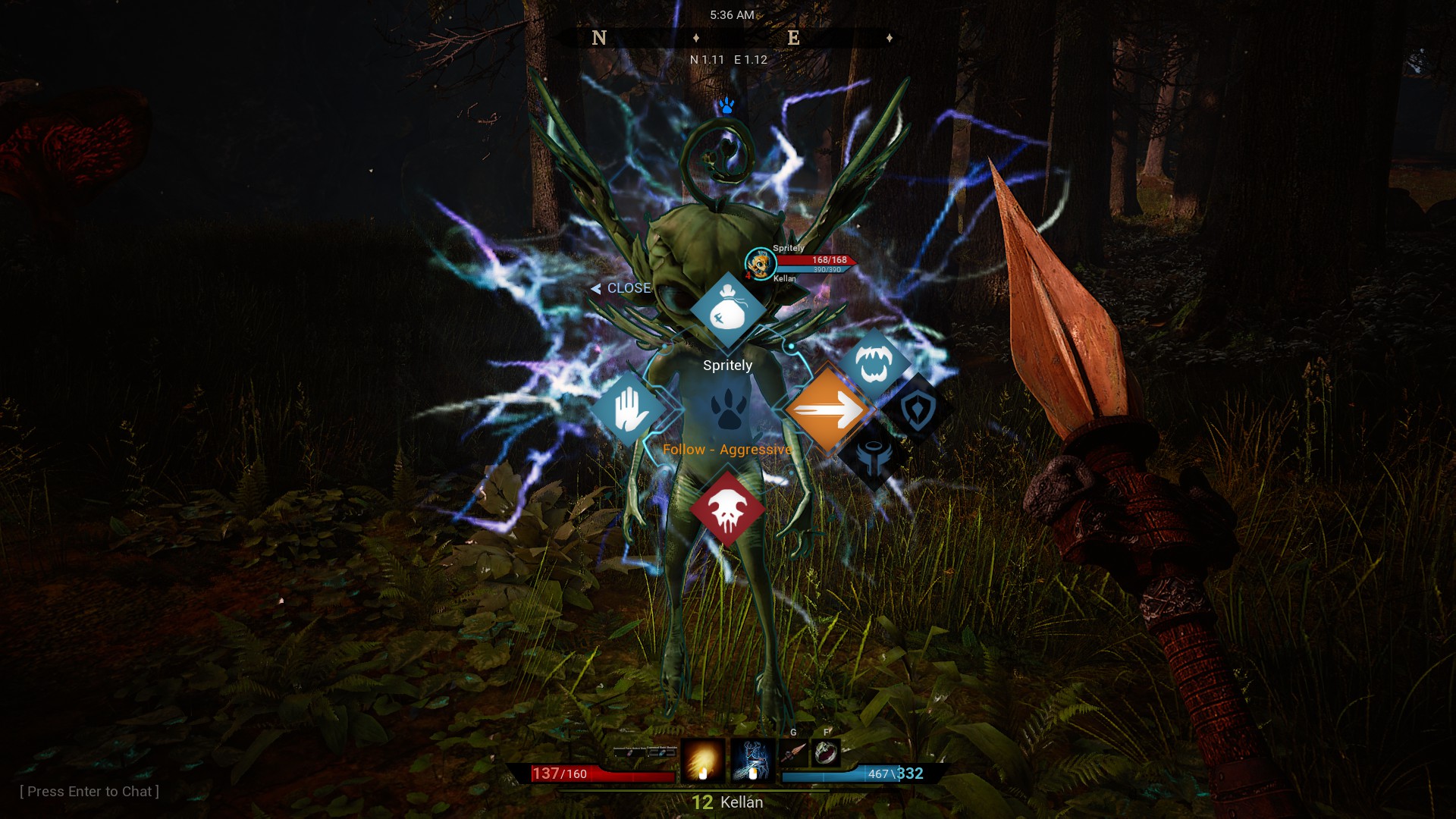 The base building in the game is simply fabulous. Once you get the hang of the interface and learn what needs support and what doesn’t, your resource-gathering abilities and your imagination really do seem to be the limit. So far I’ve made a more traditional mansion and a sprawling, multi-level, warren-like monstrosity on the shore of a natural healing pool, but I’m only barely touching the surface. As you gain knowledge points you can unlock more and better building materials, as well as dynamic lighting options and an array of decorative objects, too, should you wish to pretty things up a bit. The developers recently held a marble building competition and some of the entries were spectacular, all built with the in-game interface. 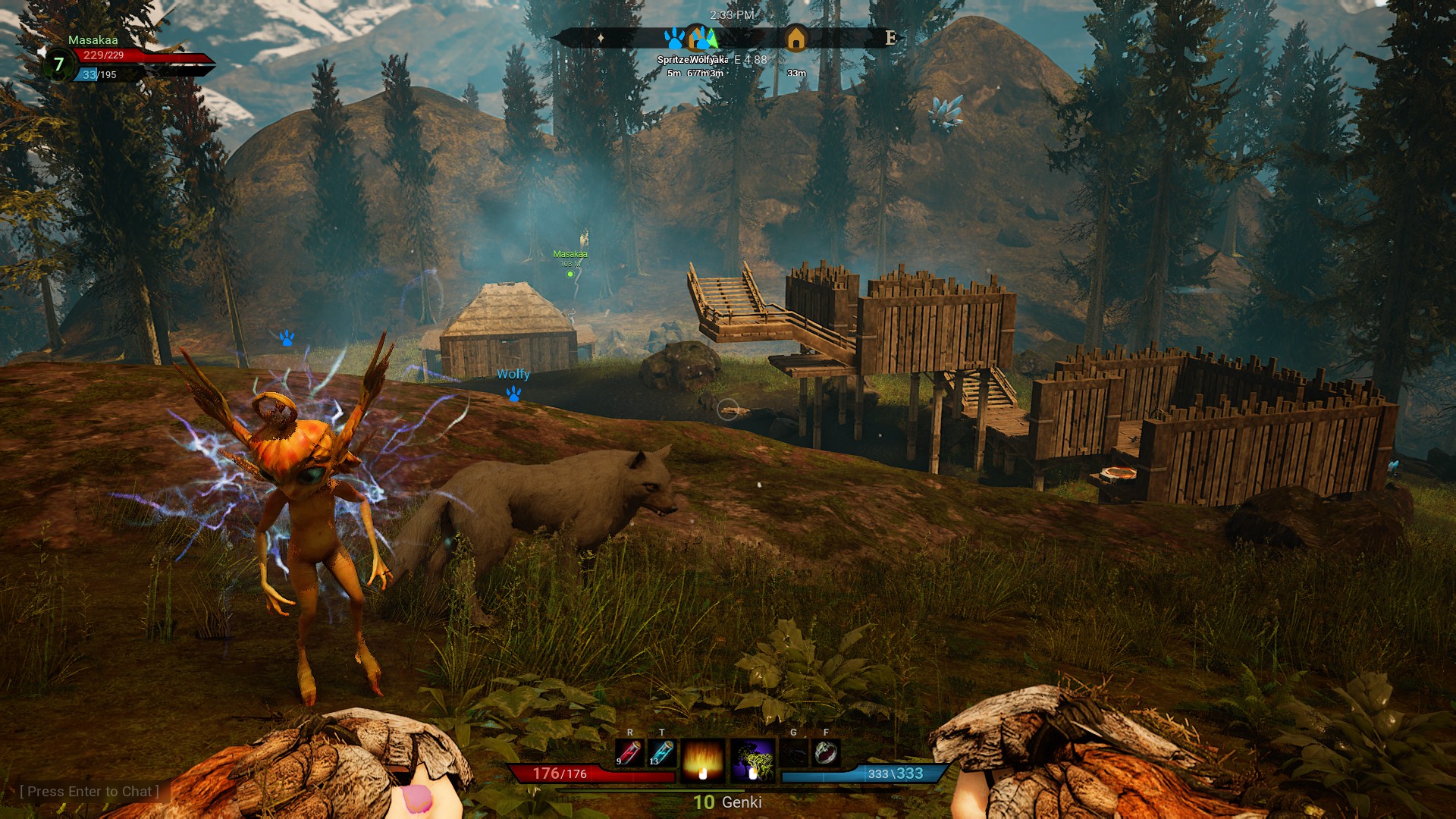 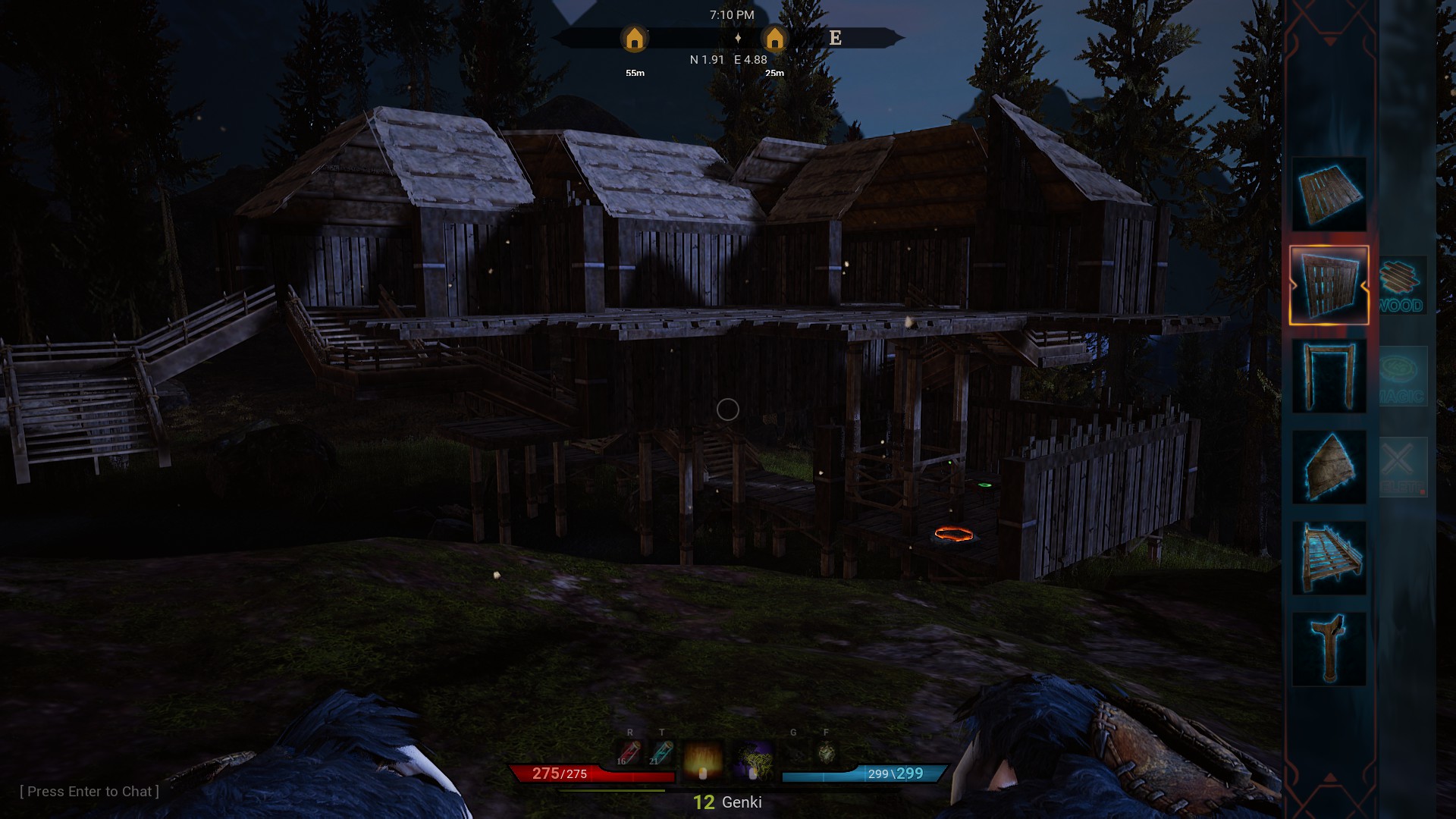 Citadel is designed to be multiplayer, but you can also set up a private server using the free server software, or even set up a custom game from the main game menu and play on a single PC if it has enough grunt. If you want to play by yourself or with friends, a private server is definitely safest, but I should also say that I haven’t seen any griefers on the two official servers on which I’ve been playing. That said, the servers in my region are not exactly teeming with players at the moment, and from other reviews it sounds like there have been griefer problems in the past. 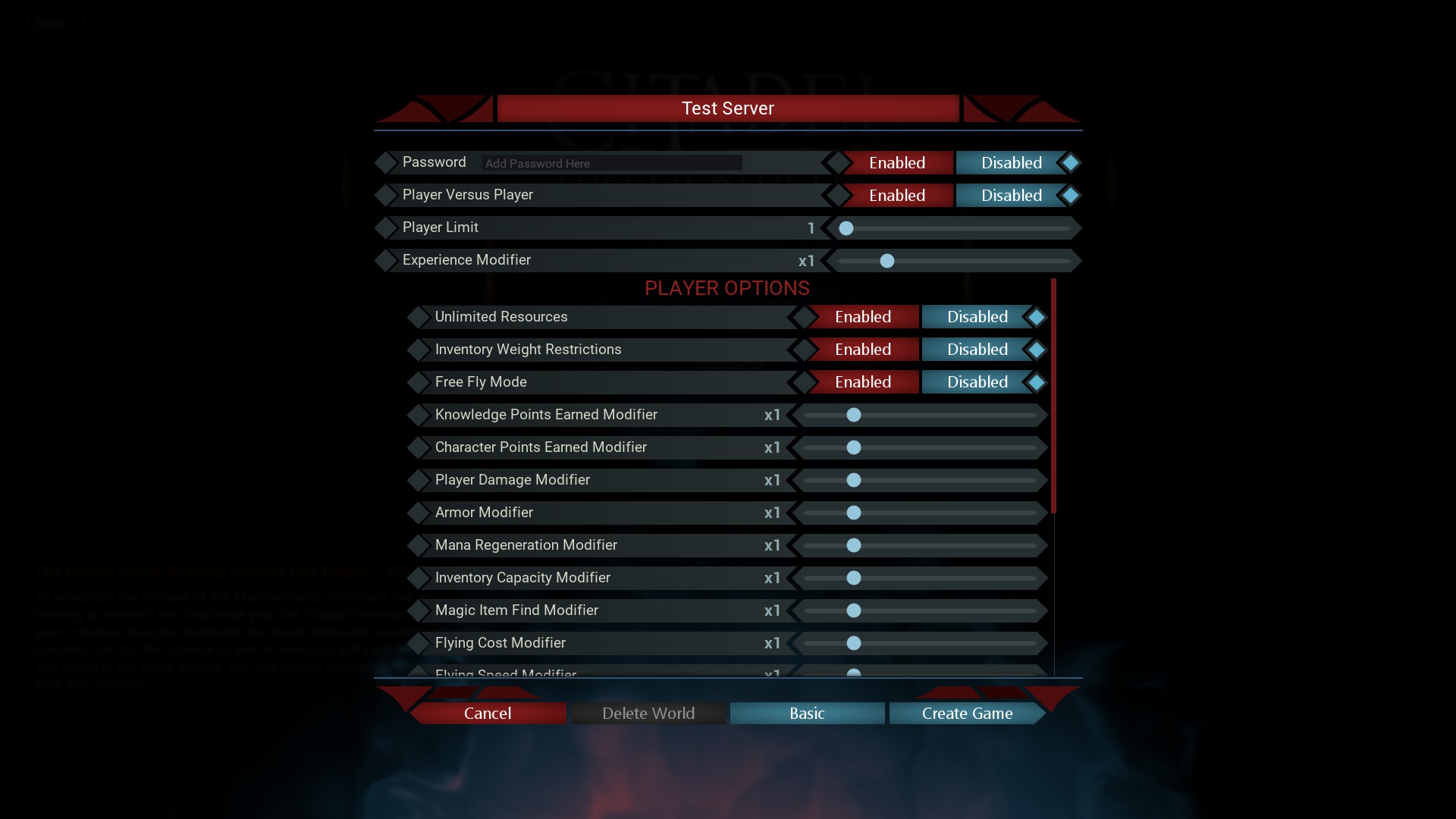 As you’d expect from an Early Access game of Citadel’s scope, the game is still a bit buggy, but the developers release regular and emergency patches: one of each in the last week alone. There are still issues with windows staying open when they shouldn’t (ProTip: try interacting with the object again to re-enable and then close them), some graphical issues, and I’ve had one big crash when I accidentally tried to pacify a cave rock. The pet AI is pretty terrible, too; pets often ignore combat entirely or get stuck on objects. I’m sure there are more issues, too, but I haven’t encountered anything game breaking yet. 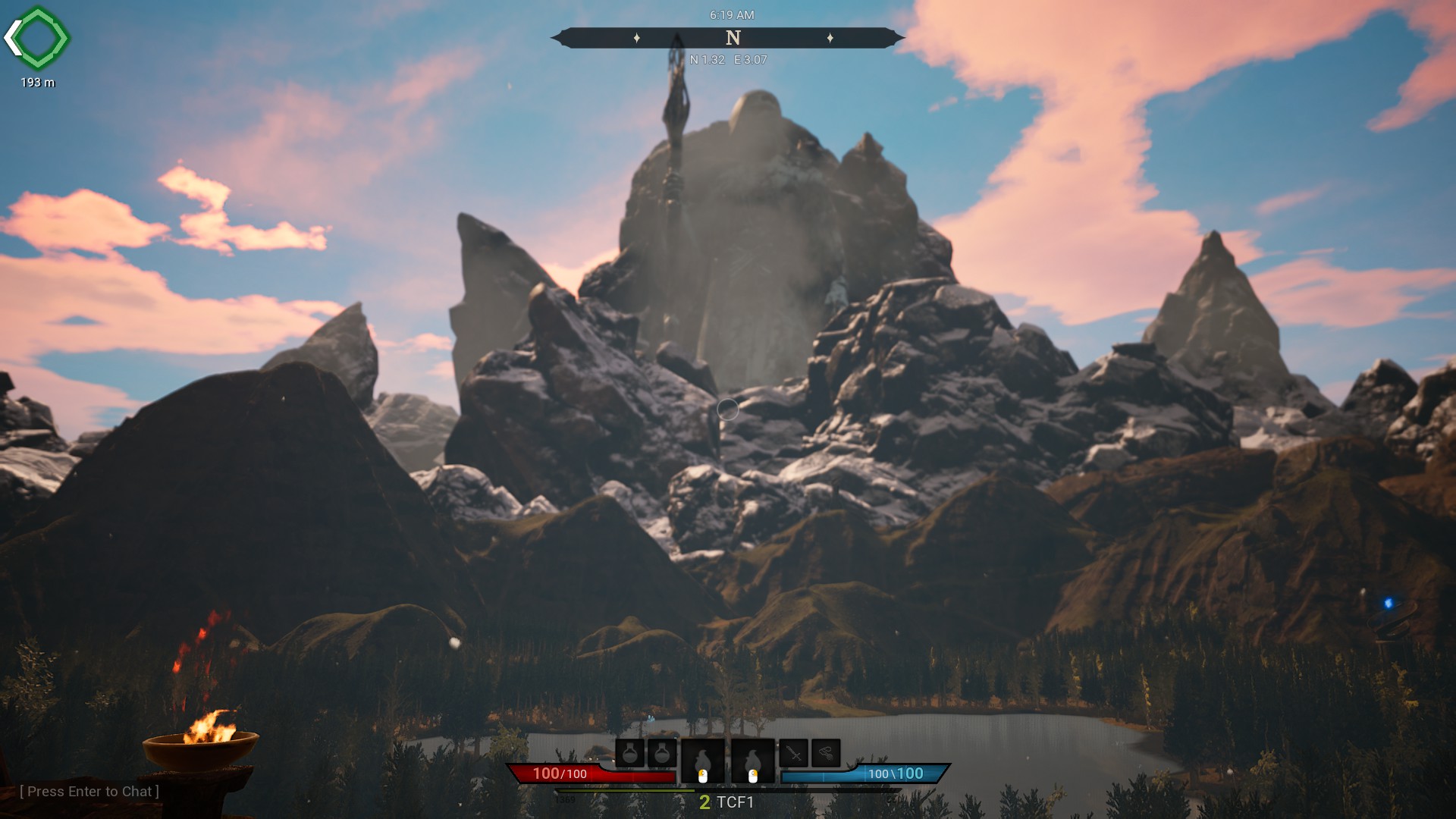 Don’t be put off by the griefer-related negative reviews. Citadel: Forged with Fire is an impressive game. The world is well realized and the terrain and flora graphics, in particular, look absolutely lovely. The lack of contextual information can leave new players wondering what to do and grinding is necessarily a big part of the game, but for anyone interested in creating their own fun in a huge magical fantasy sandbox, Citadel: Forged with Fire should hold many hours of enjoyment.