A very unpolished and cheap-feeling VR and non-VR dungeon crawler with very little to ba amazed at.

Prevent The Fall is a dungeon-crawling RPG built both for Virtual reality and regular controls, which is certainly an unusual thing. You will impersonate a random hero (male only) and raid various dungeons and locations to complete quests given to you by an anonymous tavern-keeper. Along the way, you slay monsters and loot some equipment. The regular day of a hero, basically.

General Gameplay
Gameplay for Prevent the Fall is pretty much straight and barebones in many aspects. The game features a character progression system made of three skill trees, but includes only passive skills that give bonuses such as more health, mana, parry chances and so on. However,you get no active skills, as skills in this title are given by weapons: each weapon you wield will have three different skills, for a total of six skills available at any given time, three per hand.

It would be fair if these skills had a proper description, damage, AoE etc, but they have NONE, so you will have to experiment and guess what each skill does, and for some, I have honestly not found out what they do even after trying a lot of times. Dungeons in Prevent the Fall are randomly generated and have a few different tilesets such as dungeons, sewers, caves, and so on. Each tileset will generally have its own enemy type, which makes little difference as all enemies are basically the same. If the enemy is a melee-type, then it will chase your character mindlessly for the whole dungeon and in doing so cluster up perfectly for an AoE attack, while if the enemy is a ranged one it will do the same, just sometimes stop and fire a projectile attack when able to do so.

There is no such thing as having enemies work together with, for example, supporting allies, buffing, AoE auras and such mechanics. These things are totally unknown even if they are some core gameplay features of any decent ARPG / Dungeon Crawler, so very basic enemies with no depth. Bosses are just copy-paste versions of normal enemies, but with a blue name and a lot more health and damage. There are no unique monsters or such things either, nor random events in dungeons, secret areas or mobs. None of this is present.

The loot system is also very basic as just a few pieces of gear will drop per dungeon and in general the loot will just give more health, stamina, mana, or more armor, or again more damage of a certain type. There are no unique items with special effects or skills tied to accessories. Again, the game has a very basic system in this aspect.

Also, it should be noted that the tutorial can be buggy and is very badly explained. My fellow colleague struggled a long time to even get out of it. I personally didn’t have this problem, but it can happen. 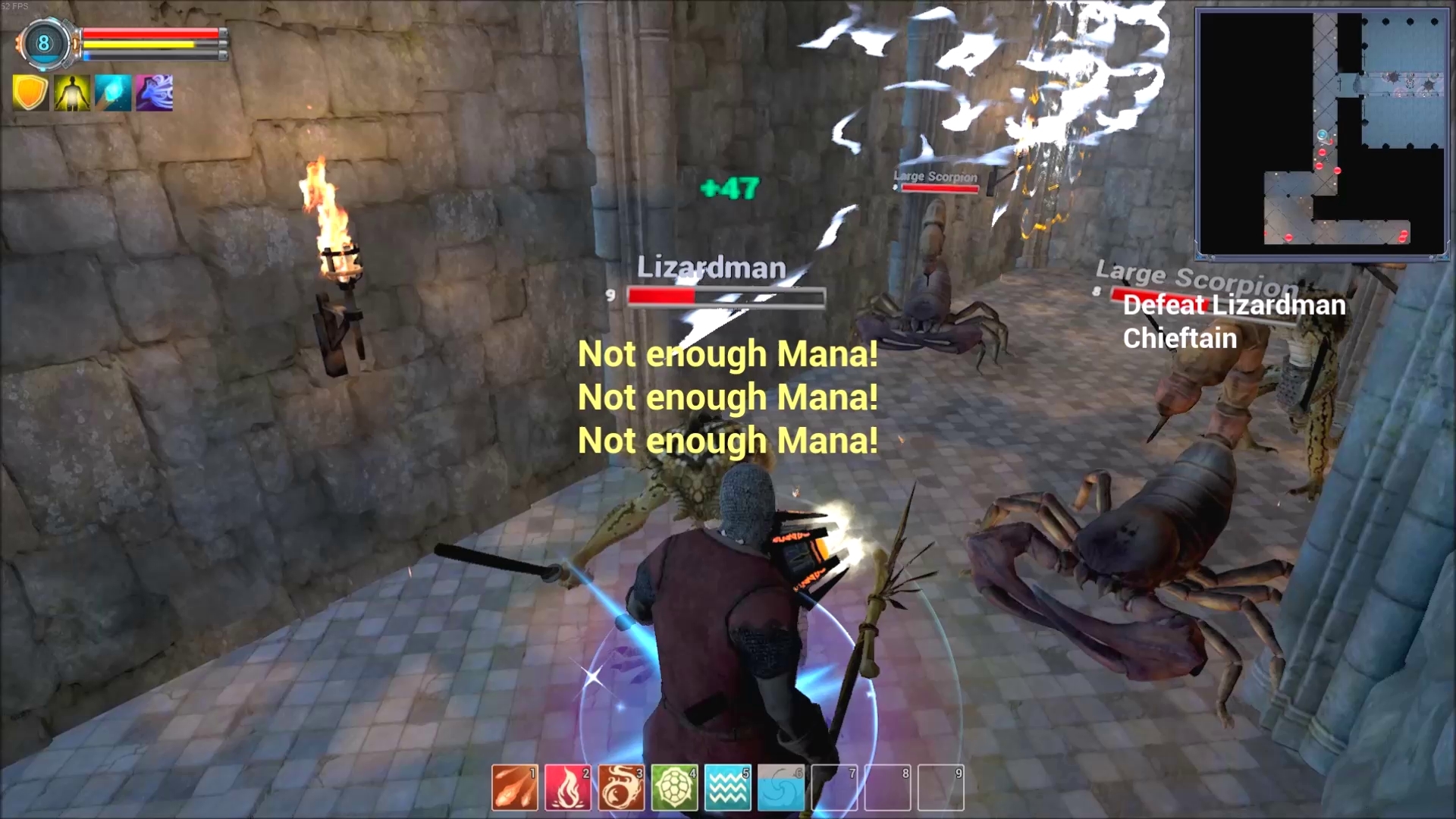 Combat System
Combat, as far as normal controls in combat are concerned, is very clunky and unresponsive. Animations are often cut in half and left or right-hand attacks will result in the same animation. The fact that skills are tied to weapons is decent, but not knowing what skills do is very bad and doesn’t help.

Certain skills are totally unbalanced and overpowered, such as Fire Strike from the Firestaff, which is a most powerful AoE spell that can obliterate mobs of enemies with ease and can be spammed quite often. Another is the Circle of Healing from the Light Staff which gives you such a great healing over time that only bosses will have a chance to out-damage that healing. Many of the skills, more than half, are useless or redundant. You can just use Fire Strike and Healing of your choice and mow down anything with that. There is no such thing as elemental resistance or having to use specific elements against specific enemies. This would have been a great mechanic but it misses the mark.

This leaves the combat as feeling uninspiring and shallow with enemies being nothing more than a nuisance.

Content
The loot table for this ARPG dungeon crawler is very poor, with maybe only 25 different items overall plus their attribute variations and level scaling. Levels are procedurally generated but offer very little interaction and basically are just filled with enemies which also are very poor as said before.

The level cap is 20, but leveling is also very shallow due to the fact there are no active skills to unlock. All the actual active skills are tied to weapons and can be used from the very first few dungeons. This thwarts progression and the desire to unlock new skills in the long run by giving access to everything from the game’s beginning, leaving just an “already seen” feeling to all the further gear findings.

There are no secondary missions, special assignments, challenges or anything, just the single main mission done eveytime and thats it. Dungeons only have one objective, no secrets, no special encounters, 2-3 mob types per dungeon, and if I do an estimate I’d say there are approximately 15 different enemies in the whole game. It seems content-wise, Prevent the Fall has already fallen.

Balancing
Ridiculously broken, only a few skills and passives are actually useful while the majority are useless or gimmicky. The same goes for weapons and gear. Enemies are always too weak even 2-3 levels above you and can be easily kited around with ranged weapons and killed without effort.

Challenge
If you do a melee character, this game could be challenging just because enemies would actually be able to hit you. Any ranged character (only mage, as there are no bows in this game, so sorry archers) is overpowered and will mow down anything without even getting a scratch. 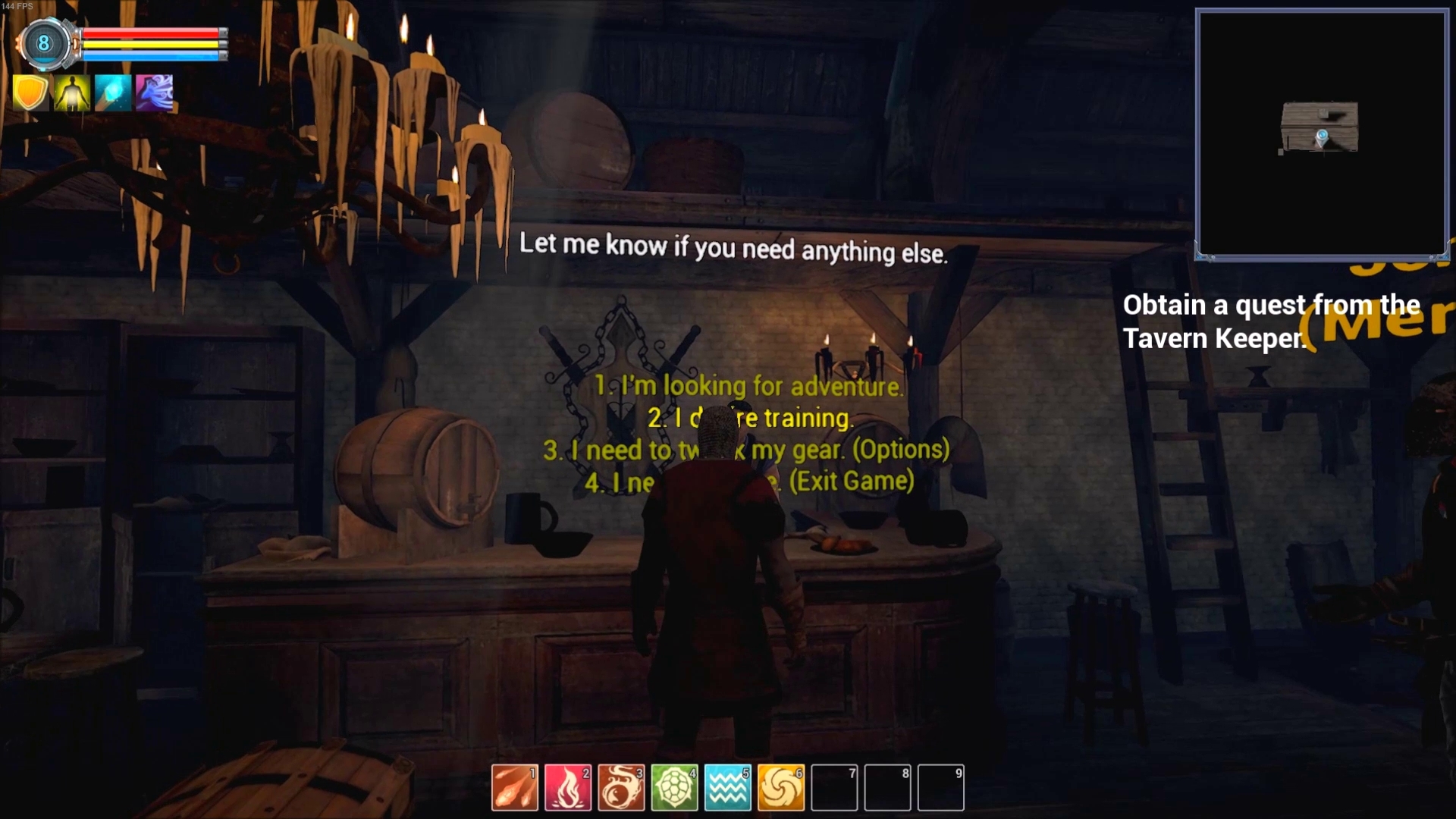 Graphics
For being a VR game, being sold at this price range and this being 2017 as a full release, the graphics are not even sufficent. The face of the only available non customizable protagonist looks like Munch’s Scream and is ghastly. I found textures are barely acceptable and show not even basic masks for shaders, reflexes, lighting and so on. It gives off a feeling of just being stick there like old ’70s wallpaper. These models are badly animated as wel and look like something from 2005.

Sound
The music alright, but barely sufficient. The sounds of combat get the job done, but most are annoying and unrealistic. For example, the sound of steps in sewer water have an horrendous sound, with most sounds coming off as made of low quality.

Performance
No problems to report.

Stability
No problems to report.

AI
Here we have a very basic follow and attack AI. There are no supporting tactics whatsoever and no engagement distance. The AI will ignore players attacking from too far resulting in easy free kills.

Quality of Life
The tutorial is badly explained and can break. Abilities are not described within the game and you will have to GUESS what they do and how. I found the inventory system to be average. There is a Stash you will never use because of how few pieces of loot you will find. There are no HOTKEYS for potions, you will have to open the inventory and click them to use them.

Bugs / Issues
It would take another review to list them all. You can exit the tavern which is used as a base and fall off the world by simply going through a wall. You can see through walls and see the skybox anywhere you turn the camera while sticking to a wall. Enemies can bug out and get stuck, not attack, etc. The parry system is inchomprensible and happens to parry a multitude of attacks like nothing. My guess is it is probably collision based with the weapon mode hitboxes and is very bugged. 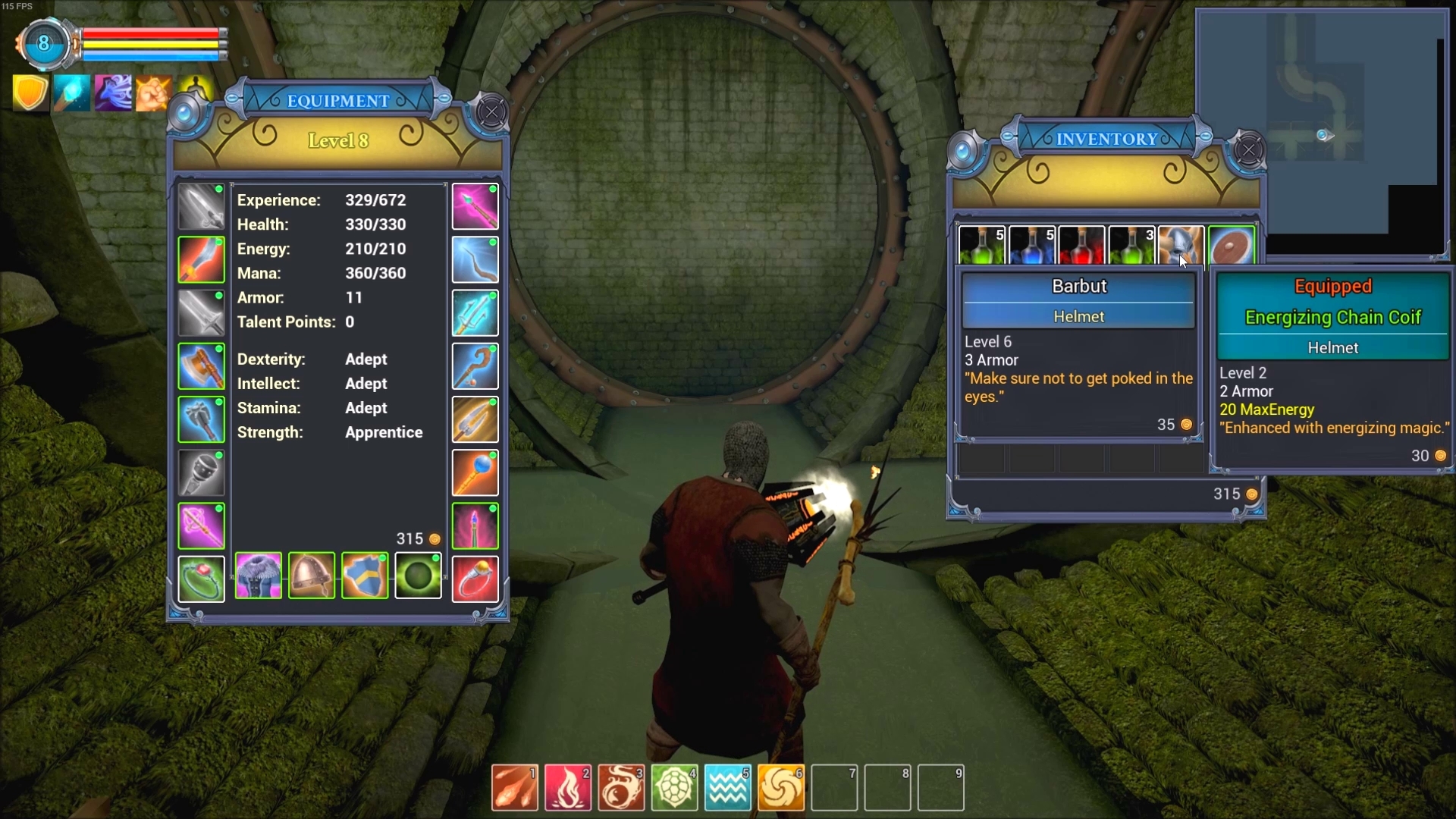 Prevent the Fall is a poorly designed and realized VR dungeon crawling RPG, with very little roleplaying involved. Everything about this title is sub par or downright terrible. For the price range involved, move on to better titles of this kind because there are plenty.