You play as someone who woke up in the freezer on board Starship Frivolity, an interstellar cruiser with some very weird inhabitants.  After a few words of introduction, you’re asked whether you know the rules of the game, which is the current hot topic aboard the spaceship, and then you’re thrown straight into a round of the turn-based card game.

You quickly learn that the game is the main form of entertainment on the ship and everyone plays it. The ship’s computer keeps track of all of the players and their ship-wide rankings. You start off as a lowly unranked player, but learn that there are six ranks — F to A — and to reach the top you have to defeat each of the rank gatekeepers. Not all is normal on the Frivolity, however. Normally, gatekeepers are assigned randomly from the ranks of players each week, and computer screens display the names of each of them, but someone has hacked the system and no one knows who may be each rank’s keeper.

Not having anything better to do, you grab a starter deck of cards and begin working your way to the top.

The first thing you’ll see is the very cool title screen. It’s minimal, but with a white corona around the game’s symbol that’s sound-responsive and pulses in and out with the title music tune, like an old WinAmp visualization. Coupled with the excellent title music, it’s a great start to a very well-polished game.

The game interface is pretty similar to most visual novels, with static drawn backgrounds overlaid with character portraits and interface buttons where appropriate. The ship is large with over a dozen (I’d guess 20-25) locations of surprising diversity. Character portraits are varied, too, and reasonably well drawn with an anime feel. 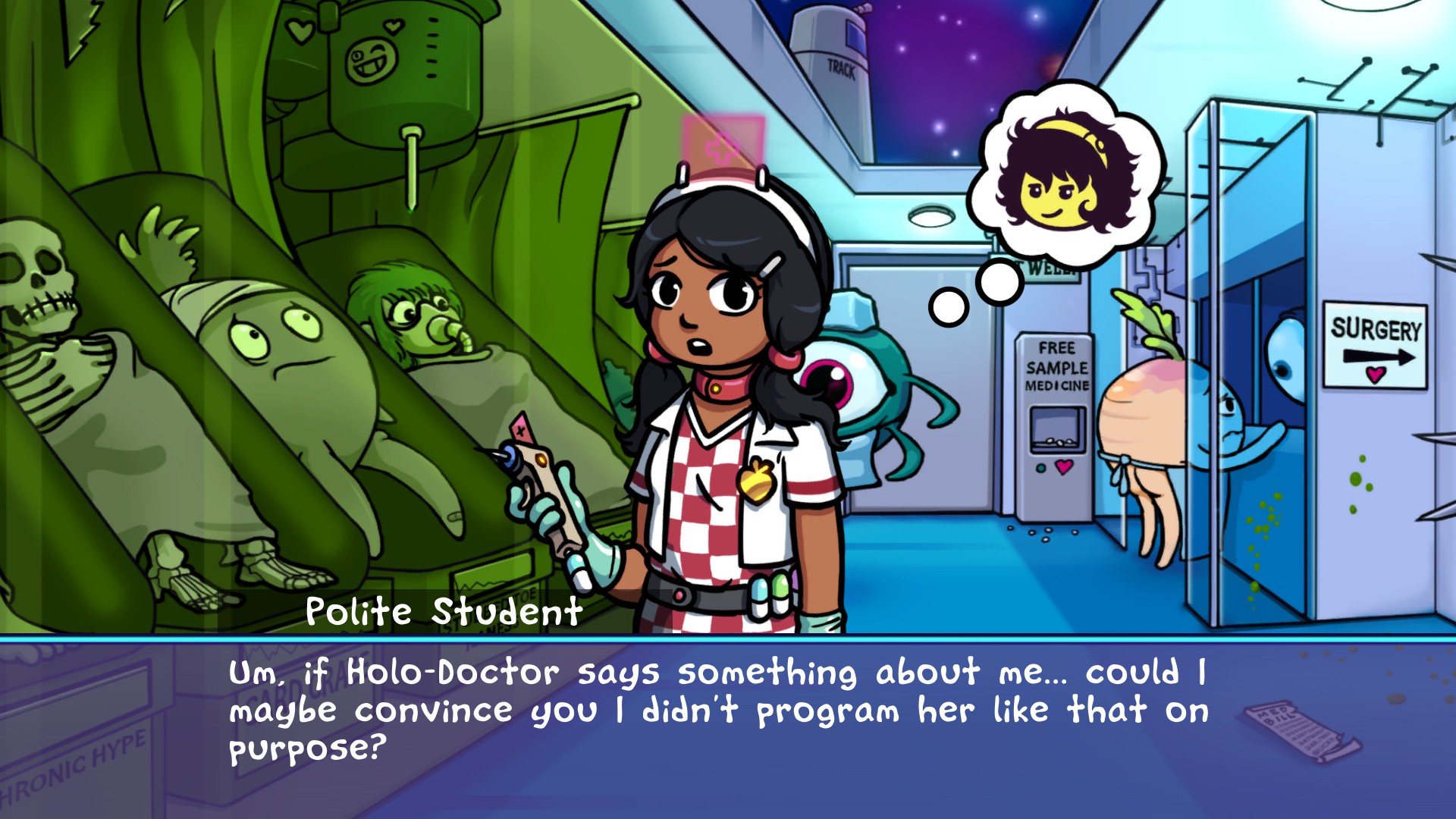 The cards themselves are very similar to the previous game, with characters and settings from Ludosity’s other games, which is a nice touch for fans of the developers. There are a few different styles of art, in keeping with the different games they represent, but it all works well and looks pretty good.

The interface is large and colorful, in keeping with a game compatible with mobile platforms, but I found it a little less intuitive than that of the first game, for some reason. It looks fancier, though.

There are no graphics options, but it’s not the sort of game to stress a modern video card. 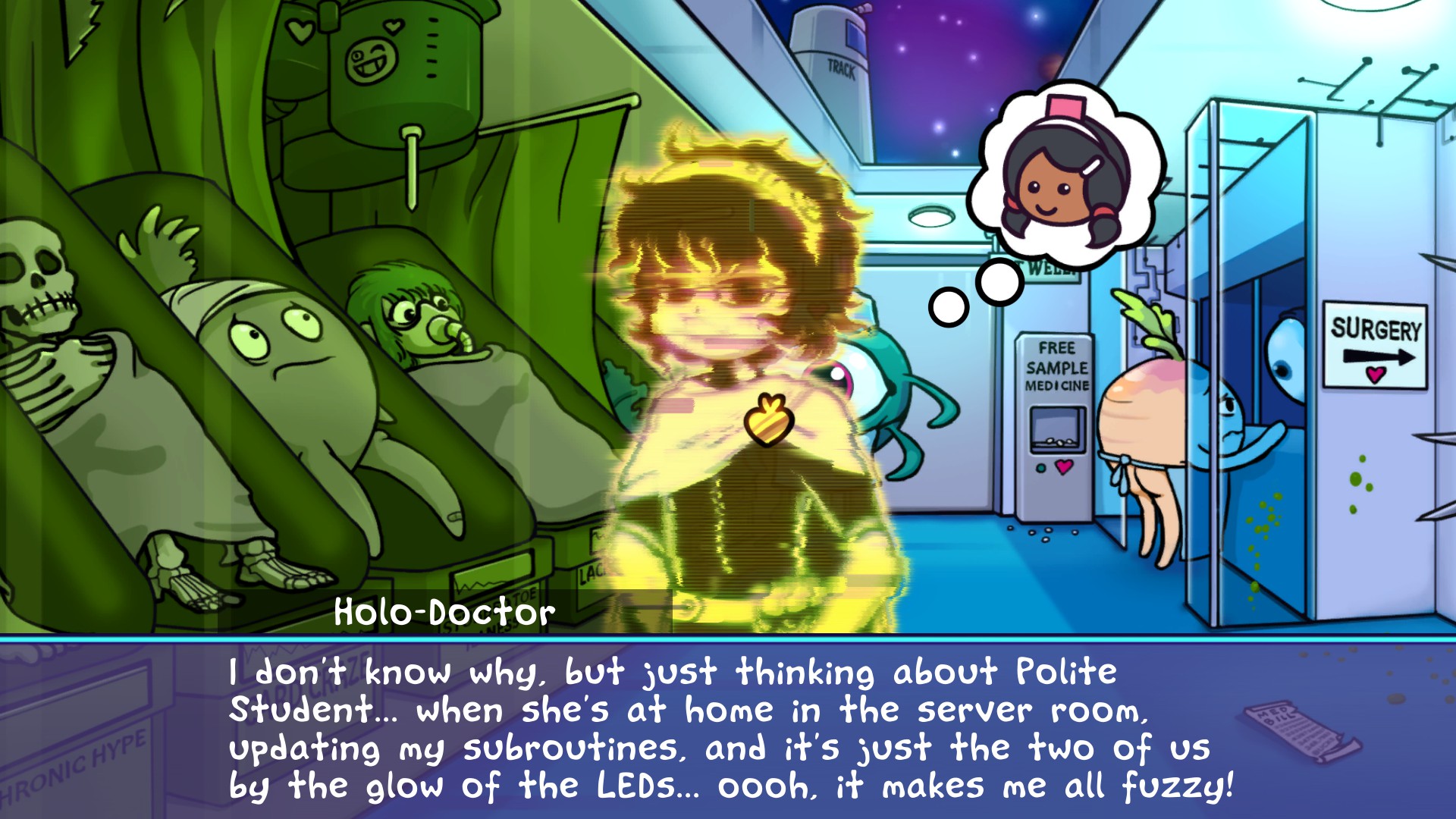 Music within the game is different compared to the first game but in the same style. It’s almost like a slightly hyped-up cross between electronic jazz and elevator musak, if you can imagine that, but that’s not really doing it justice. The title music deserves another mention, and the track played while searching for a multiplayer match is nice, too.

Sound effects are nothing to get excited about, but there’s nothing bad about them either. Everything is well produced and normalized and there are three different volume sliders, so if you want to turn off the great music and listen to your own then you can do that and still hear the effects.

There are no voices, but the dialogue is very well written. 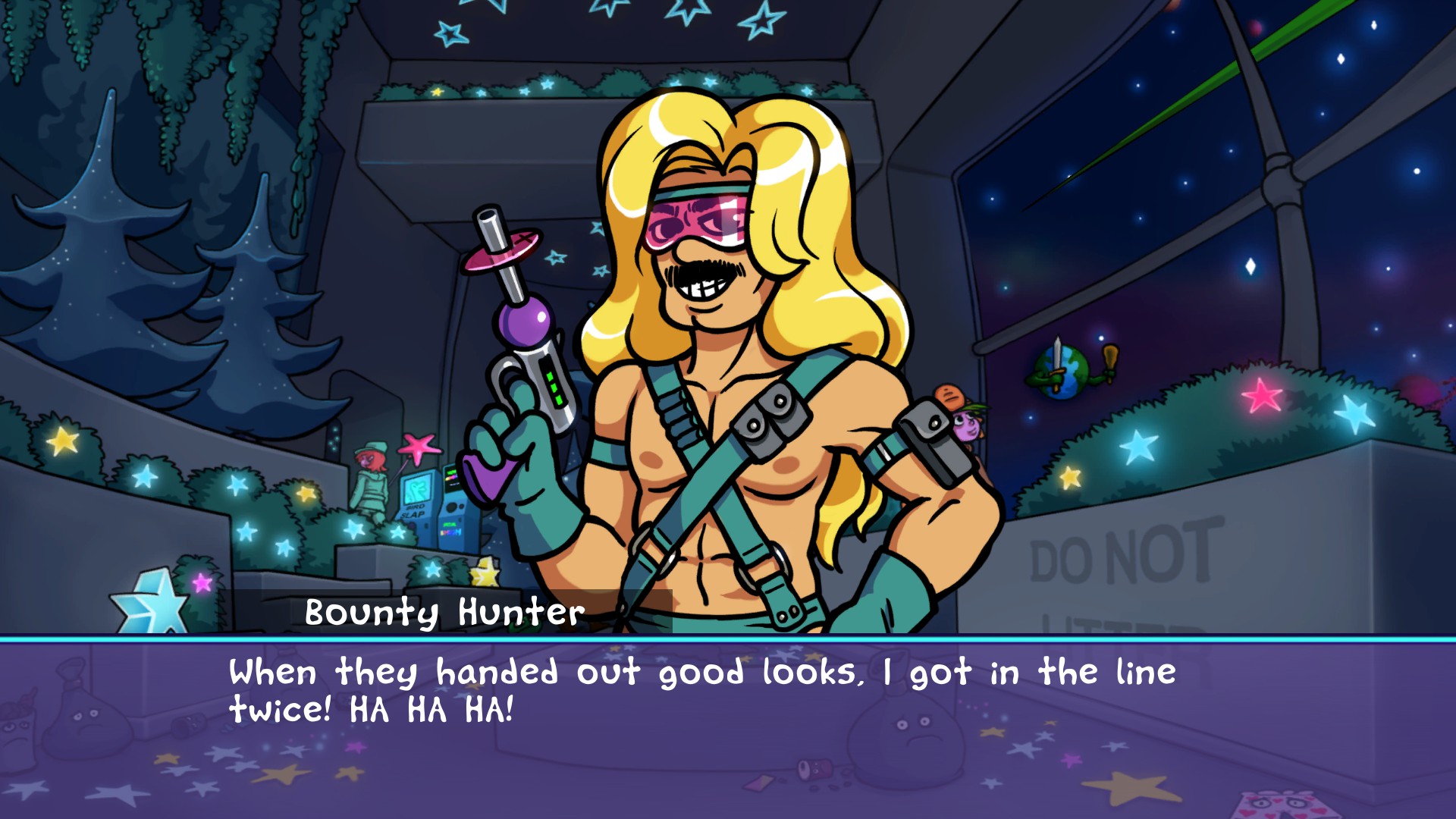 The core idea of the game remains basically unchanged from the previous game, with you traveling to different locations, shooting the breeze with the weird and wonderful characters you meet and then engaging them in card battles. The non-battle sections are essentially a visual novel with a few minor choices, but I suspect they don’t change the script much, if at all. It’s the same formula as used in the previous game and it works well. Card City Nights 2 makes a few changes to the basic card game, though. 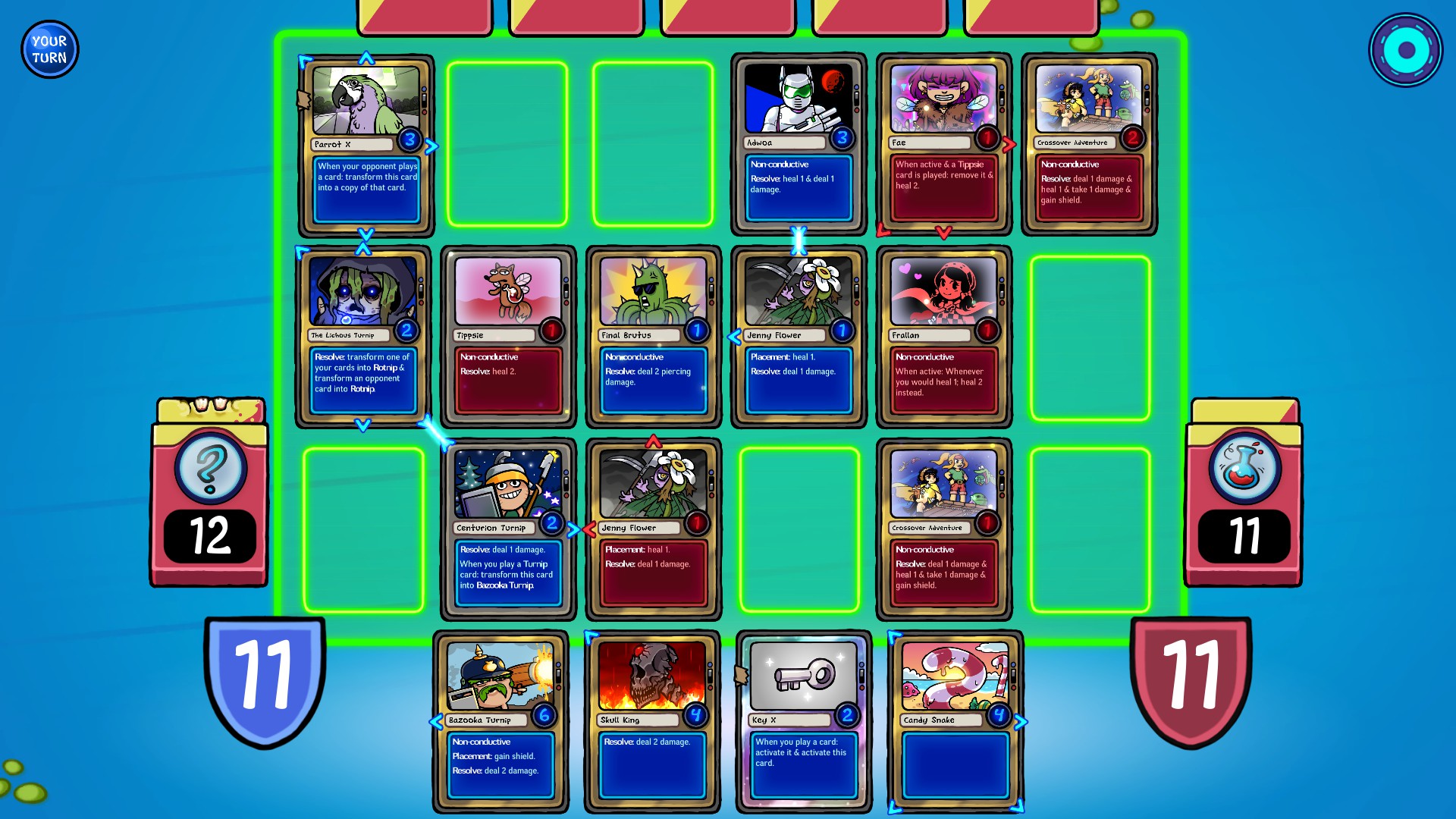 For anyone not familiar with the first game, it’s probably worth explaining the basic gameplay in order to explain how this sequel differs. In Card City Nights, you progressed by battling opponents in a game of cards. Each game allowed you to pick a deck of cards to use and attempt to win a best-of-X hands situation. Each hand had two boards: yours on the left and your opponent’s on your right. On your turn, you placed one card from your hand of five onto your board and tried to connect three attack, defense, neutral, or recovery icons based on arrows in the eight directions surrounding the cards. When you had three icons connected (normally three cards, but some cards had multiple icons) then the cards would be taken off your board and you’d gain the effects of the icons: defense, attack, or recovery for one of your disabled cards. You won the game by reducing your opponent’s defense to 0 or preventing your opponent from being able to place a card.

Card City Nights 2 changes the game so each hand has only one shared board. Cards also have activation times, so when three icons are joined each card starts an activation timer; its effects and removal from the board only take effect when the timer runs out. You can activate new cards by chaining them with already activated cards, too, so having cards with long activation timers is a bonus. It also does away with the different card classes and leaves it up to the special effects of each card to determine what it does when its effects are resolved. There are various other changes, too, such as what happens when the board fills up or you run out of cards, but overall everything combines to make the game’s tactics completely different to the previous game.

The card limits are probably worth mentioning. The previous game let you customise the size of your decks between the minimum and maximum limits. This was good as some cards worked particularly well with few others, while still others would work best in a much larger deck. Card City Nights 2 removes that and forces you into a 24-card deck, which is often not enough for a tactic focused on a particular set of cards, coupled with some more generic ones to get your through. It’s an unnecessary restriction and an unwelcome one, in my opinion. 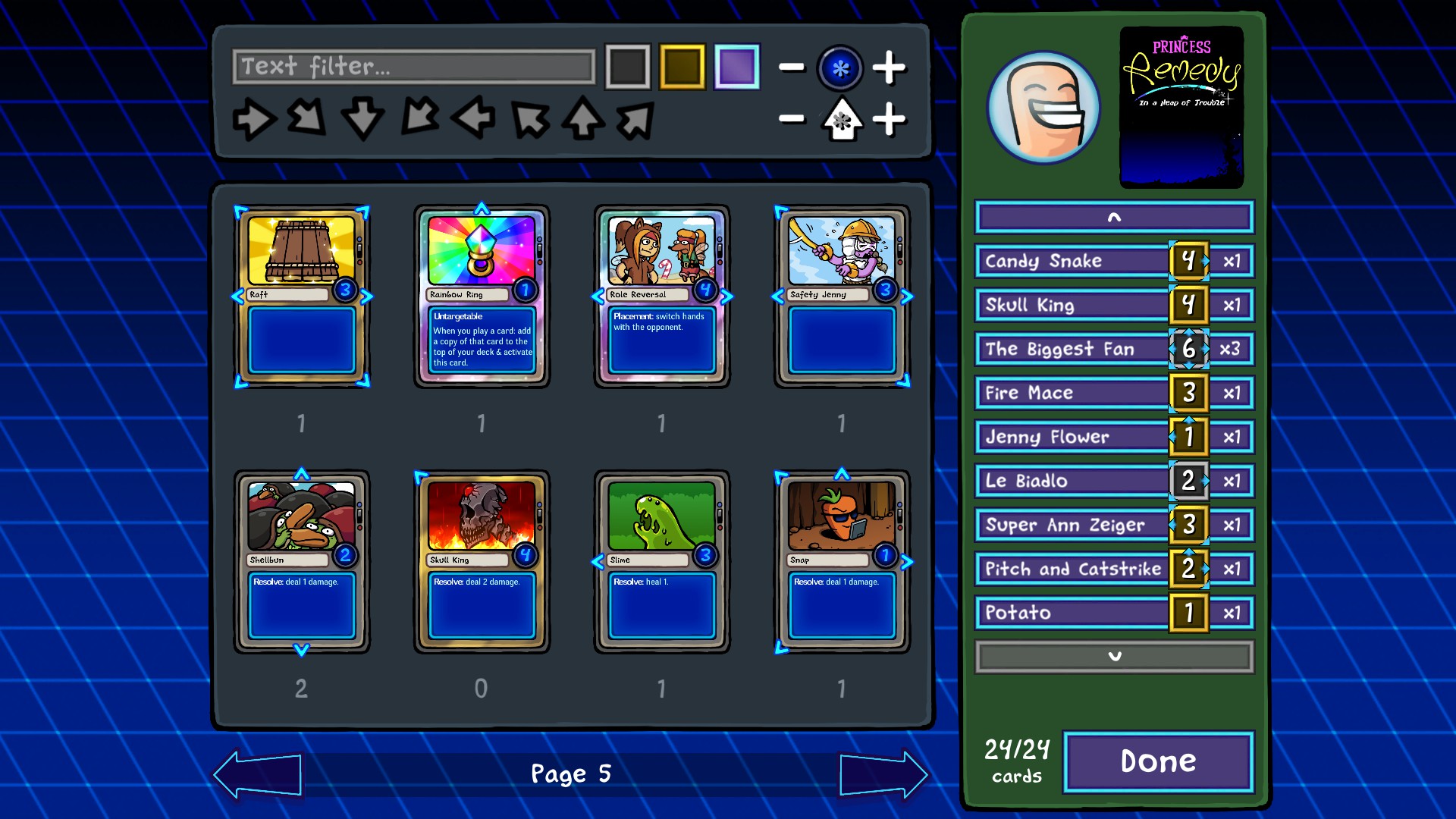 As with the first game, you can spend lots of time looking at the location backgrounds and still find new things and silly comments (“BANANAS FEEL NO PAIN”) next time you visit. The locations have invisible ‘hot zones’ where you can find coins, cards, and sleeves by clicking around madly, which isn’t much fun.

New additions to the game include all new card sleeves, card trading with other characters with values based on card rarity, hacking of cards to change their abilities (both good and bad!), and some retro arcade-style mini-games, which I thought would be a welcome distraction, but I didn’t actually enjoy them very much. Card City Nights 2 also adds an online mode. From what I can see this is essentially just a one-on-one card battle, but you can create a number of different decks and save them for different play styles and you have access to many cards even if you haven’t seen them in the single-player game yet. Unfortunately, I wasn’t able to find anyone else playing to try it out. 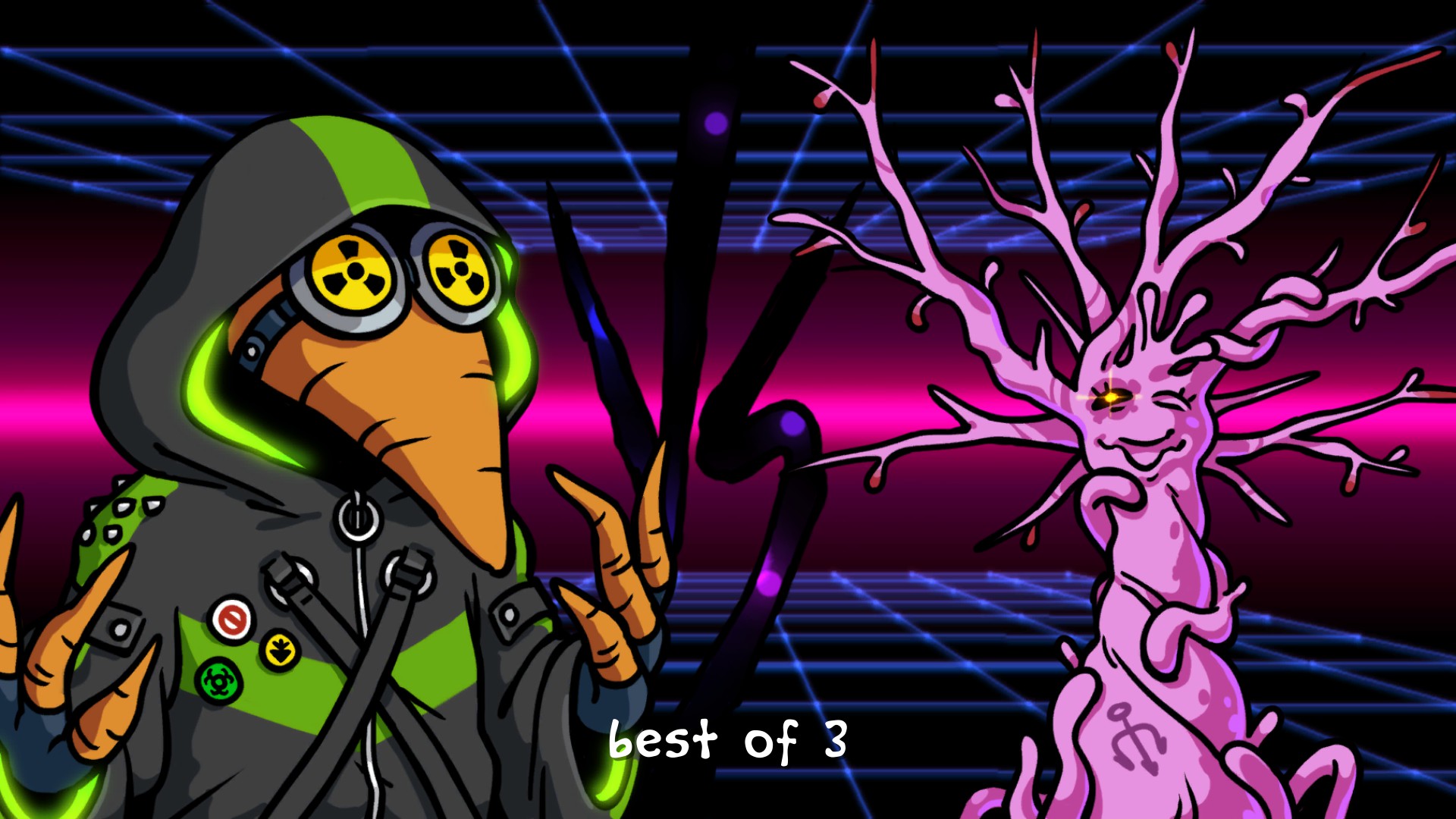 In a couple of games, I’ve had my opponent play cards next to activated non-conductive cards (with all their links deactivated). This shouldn’t activate the newly played card, but sometimes it seems to. I haven’t worked out yet if I’m missing something or if this is actually a bug.

Cons:
– Decks limited to 24 cards each
– Background clicking to find hidden objects
– No one playing multiplayer (yet) 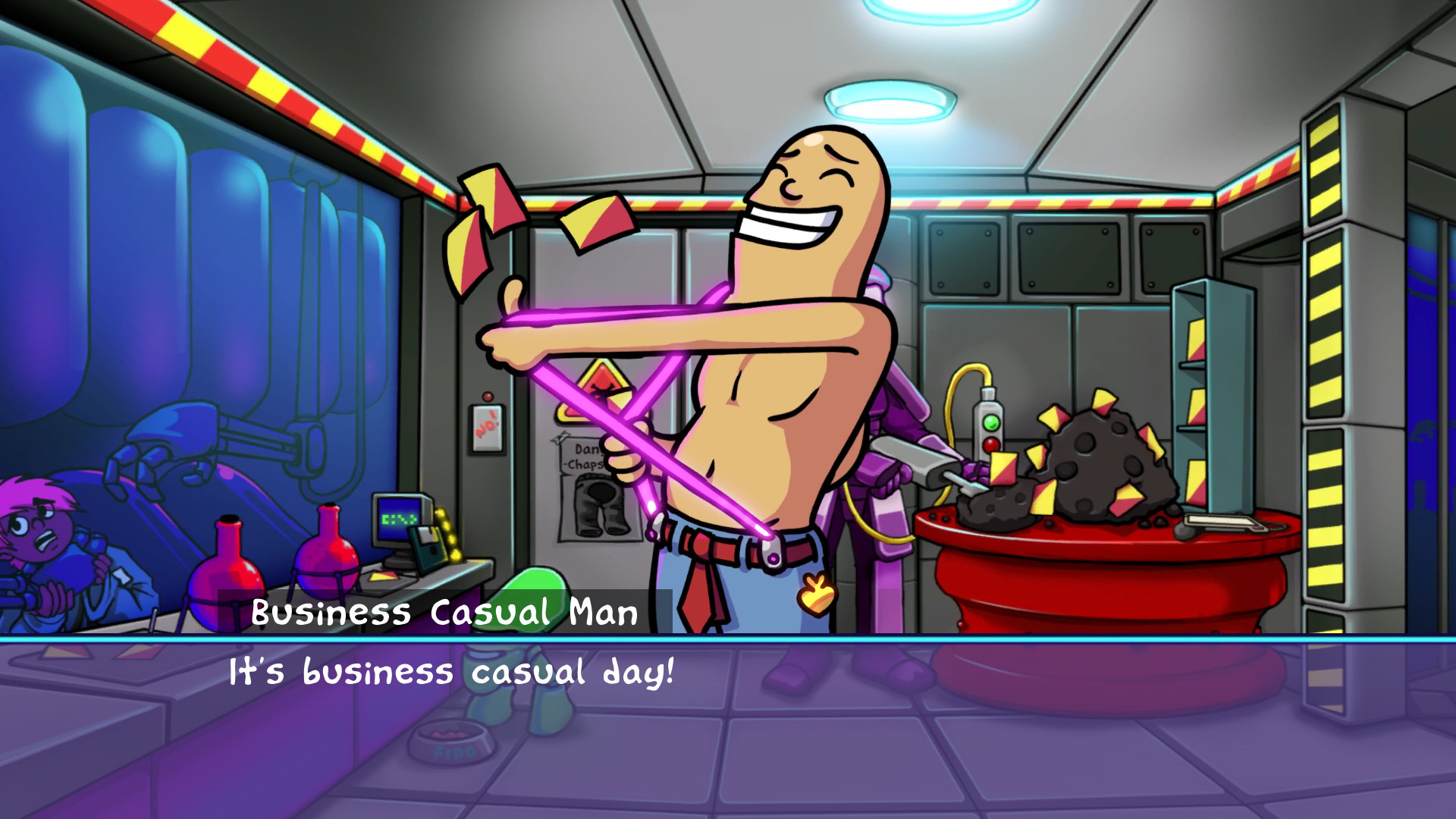 Card City Nights 2 offers similar gameplay to its predecessor, but with some major changes to the card rules, and thus the game’s tactics. The story is silly but in a good way. If you liked the first game then you’ll probably like this one too.