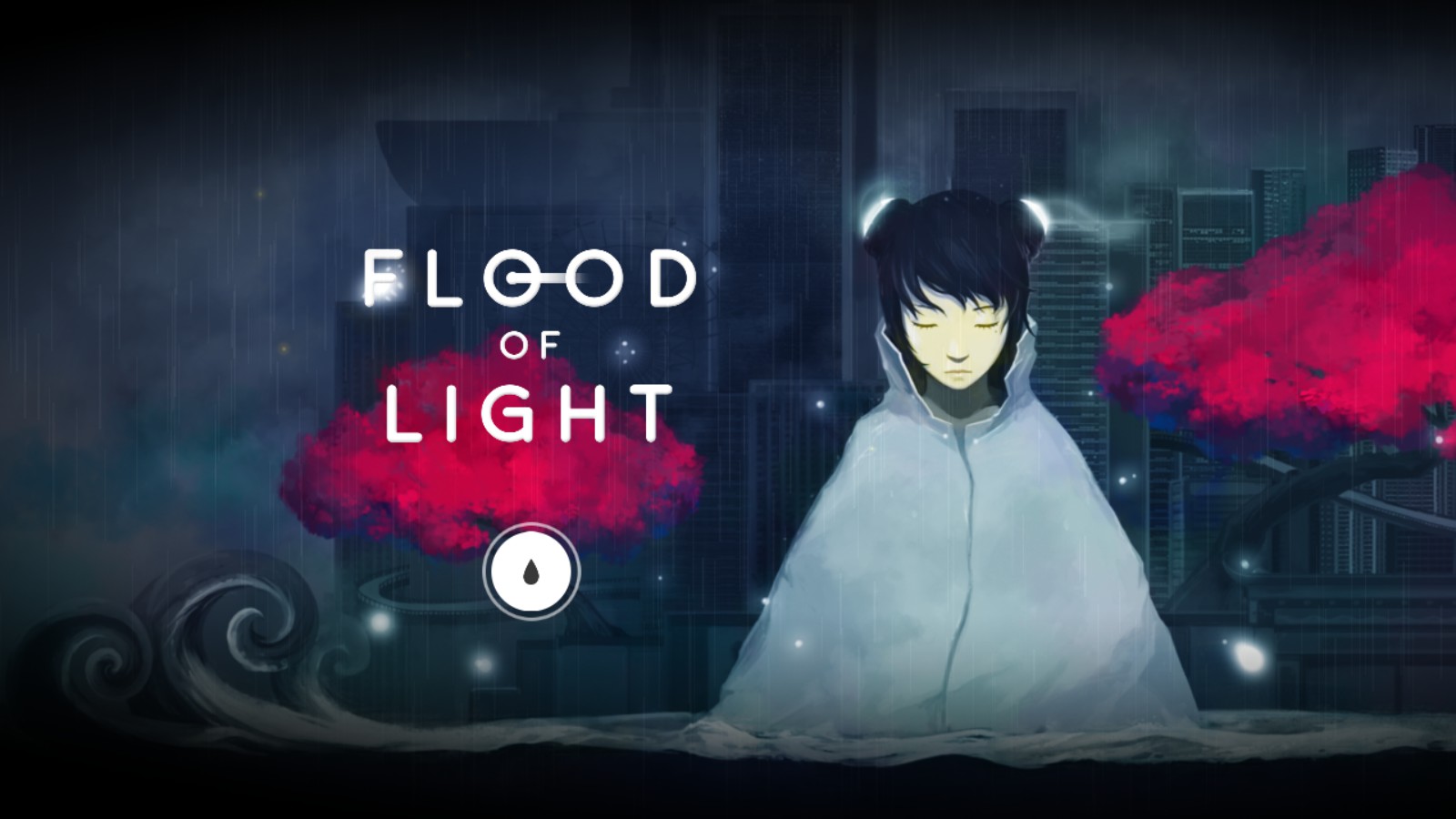 Sometimes you buy games based on how it looks. Maybe it is just simply due to the genre associated with it, or perhaps something interesting you heard about grabbed your attention. Sometimes researching a game beforehand or waiting on reviews simply can not wait. Arguably, this makes for some impulse decisions in purchasing a game, especially when there is a high chance of it being horrible. Flood of Light is one that I absolutely loved how it looked and decided that was enough to give it a try.

You immediately start off on the roof of an eight story skyscraper in Hope City. How did you get there? Who knows. All you know is that there is a path in front of you and a whole lotta water under you. The mystery is what this place is, how it came to be flooded, and who you are.  This is what drives the story aspect. The way the city came to how you currently see it is told by Doctor S through his entries available on various terminals around the town. He Informs us that all humans evacuated before the rainfall fully submerged most of the buildings. As there are only a few terminals on each floor, each entry gives you more and more information, your curiosity bringing you to a better understanding of the city’s situation. Not only is the story told to you by entries, there are various robots that were left behind when the humans evacuated. Instead of the robots recounting a more personal account, they instead only want to help you save them. You hear talk about a Revelation Code detailing that a Guide with an appearance of a human will come and save all of the robots.   You also unveil the general history of that floor, where the mysterious pedestal is, and an explaining of when you get more powers.  It’s similar to the entries, this reveal goes slowly as different robots have different limits on how much they can tell you.

Of course, you can totally ignore the story. The terminals and the robots are placed in obvious spots, only one or two can be missed if you are only paying attention to the puzzle area, and it is very easy to skip through it.

The girl you play as has the ability to absorb light as long as a lamp containing it is close enough. In addition, if a lamp contains an unattached light, or light orb, she can redirect it to another close lamp. The light is also used to power switches so elevators will activate or doors will open. However, you will not be able to continue unless you lower the waters as the girl will stop before you have the chance to submerge her head. This is where the puzzle aspect comes in.

This would not be a puzzle game with just being able to control light orbs. Each room you have to complete contains one or multiple light monoliths. As you progress along, you will the paths get more and more complicated as you have to think about how that action will affect the room and if it will help towards that goal. Will taking this move let you have enough light orbs for all of the monoliths? You can, of course, restart from your last save point as there are some instances where you will not be able to get the light orb back if you make the wrong move. This all leads to the pedestal, which each floor has, to give you the sweet reward of a massive water drainage and getting closer to the ground floor.

If you think just absorbing light for eight floors will get boring after knowing all the ins and outs, it is addressed. Mechanics are added to keep the game fresh and challenging and it helps that it does go in line with the story. Wicks are placed around each floor, earning a sort-of collectible and a challenge. If you collect all of the wicks you will be able to see the second, and true, ending. You can also try to get an ‘S’ rating to test your skills. The easiest goal is talking to the robots, but the hard part is getting the minimum amount of steps possible. This does include wicks, so even if you talked to all the robots and got the same or less than the minimum steps but you missed a wick, you will only get an ‘A’ rating. If you are an achievement hunter, all floors have an achievement where you need to get an ‘S’ rating. Just talking about the puzzles and the story will undermine how the atmosphere was built around you. It would be unbelievable if the city looked like the sun was out while there are obvious clouds hovering above. Each area looks like the rain drained the color out of them while you look nice and bright. You will also note the constant rain and water below you. I do like how you are regularly reminded of the purpose of doing this. Though I do think it’s pretty cool that they added the telescope. When you first look through it, you see the drowned city. However, once you get a few light pedestals activated it will reflect in the telescope image. As the water level will correspond with the floor you are on, it might not seem you are doing much, but this does put it into perspective. The piano that accompanies the rain is amazing. It easily gives the feel of being alone in a vast city that used to house humans. It brings about the feeling of sadness throughout the gameplay, but yet seems to hold hope. I even teared up a bit at multiple parts. The piano does stop most notably at the end of most of the floors when you walk towards the pedestal, only having the sound of the rain pelting down and minimal sound effects.

Arguably the ending is pretty lackluster, especially if you do not collect all of the wicks. You spend all this time learning about the background of Hope City (if you chose to) and working through all of the puzzle rooms to activate all of the pedestals. If you just missed one wick, the ending will stop early. Without an ending this game has no pay off, the players have no reason to go back and collect all the wicks as it will be assumed the true ending is the same way. +/- Some lines were not translated (never fear, the entries and the robot dialogue is translated)

Flood of Light is a relaxing puzzle game. As the puzzles are simple, but having just enough challenge for you to think it through. Coupled with the music, this makes Flood of Light one of those games that can be played to wind down for the day. With a goal set in front of you, and curiosity taking the helm, the four to ten hours is enjoyable with little to no frustration. Just expect the ending to be the weakest link to an otherwise great story and atmosphere that was built up.