Make your marooned Island fantasy a reality in this virtual Bear Grylls simulator. Wayward transports you to a pristine island paradise, where all is not what is seems..

Wayward is a brutally hard survival roguelike. Taking the one turn mechanic into a Lost in Blue deserted island environment with a deep Minecraft crafting system. Through a punishing difficulty curve, this game teaches you to take every step, every decision carefully. You are a fragile near naked chap/lass, marooned in a deadly and unforgiving wilderness.

There is a large focus on simulation, survival and openness. There are no classes; there are no levels. Progression of your character depends on individual skill and stat gains by your interactions with items or objects in the world. You are free to play and explore the game in any fashion you wish.

I’ve been following the development of Wayward for some time. Initially, a free browser game, Development has now transferred to Steam’s Early Access program. A recent Beta 2.4.0 “cultivate” point update piqued my interest and decided to jump in and see how the game is progressing from its humble origins. 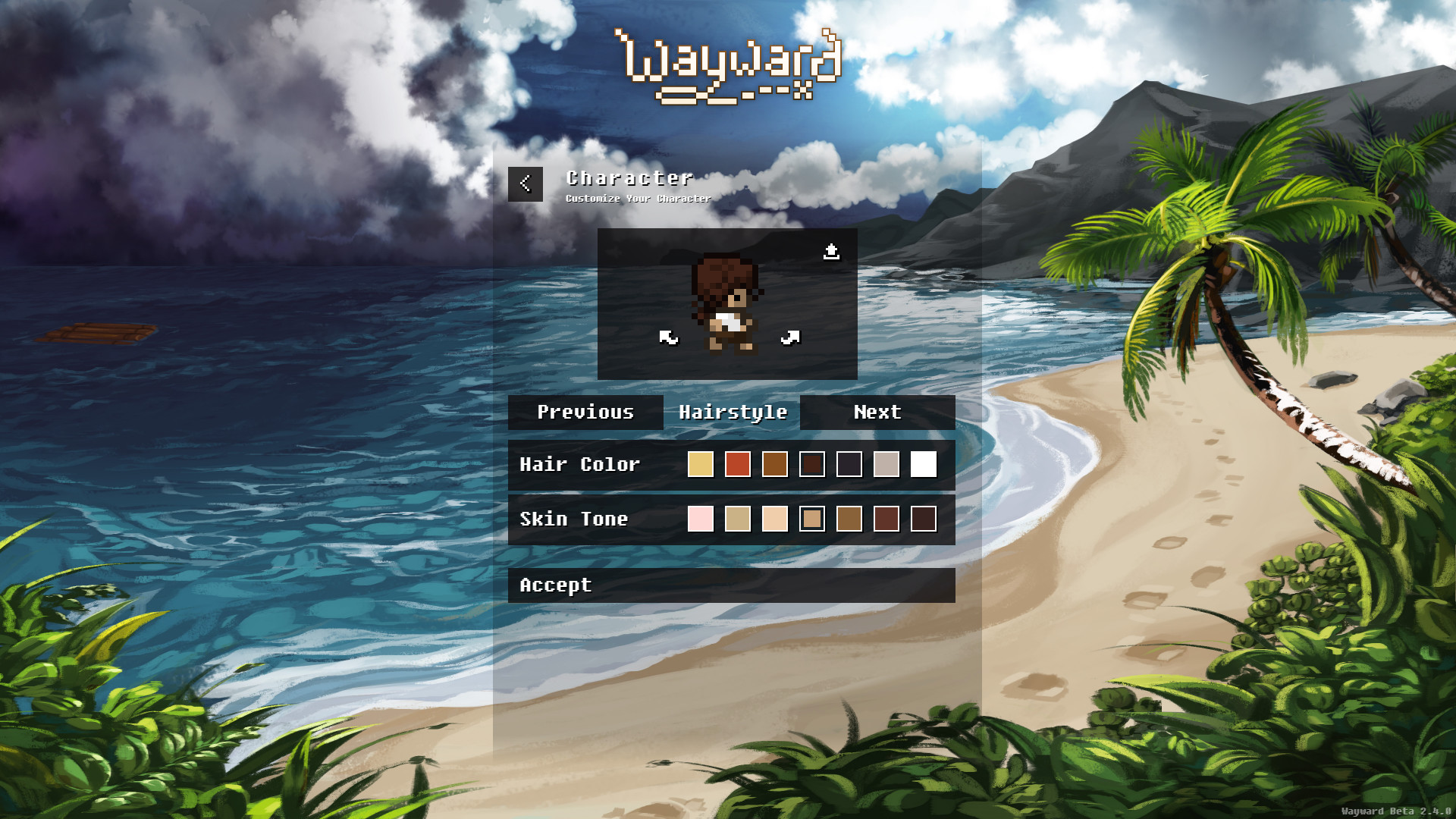 To say the crafting system is deep would be the understatement of the century. Only by playing the game do you realize that anything you craft is not a benign static object. Tools degraded with use. Food rots and heated objects return to their nature ambient state after a time. As time progresses and you attain a degree of expertise, you can craft objects with better precision, thus resulting in a better quality item with more durability or stat bonuses.

Unlike some other previous survival games where you create objects through a process of trial and error whilst building up an encyclopedia of useful kits, Wayward takes a different more interesting approach. This is one of theory but no hands-on craft skills. It’s almost as if the player watched numerous survival programs and YouTuber vlogs. If Ray Mears and Bear Grylls are familiar names to you and their words or tales of daring do’s have been stored in your noggin, then you’ll follow my train of thought here. Alas, you know the theory but have zero practical skills. A blundering amateur set loose in a pristine wilderness carpenter’s workshop.

All the items available to craft are presented in the aforementioned menu. This includes everything from the most basic sharp stone to high-level objects like kilns, furnaces and water stills. The ingredients are clearly shown. There’s no ambiguity or fuzz. Knowing what constitutes a solar still is cool. Actually building the contraption is an entirely different ball game. As you will soon come to realize.

At first, this is frustrating as you continually fail to make the most basic of items. But slowly through time, your skills increase. you become competent and your tinkering level goes up. All the other real world tasks in the game use the same system. Be that gathering, lumberjacking, fire making and general fighting skills. 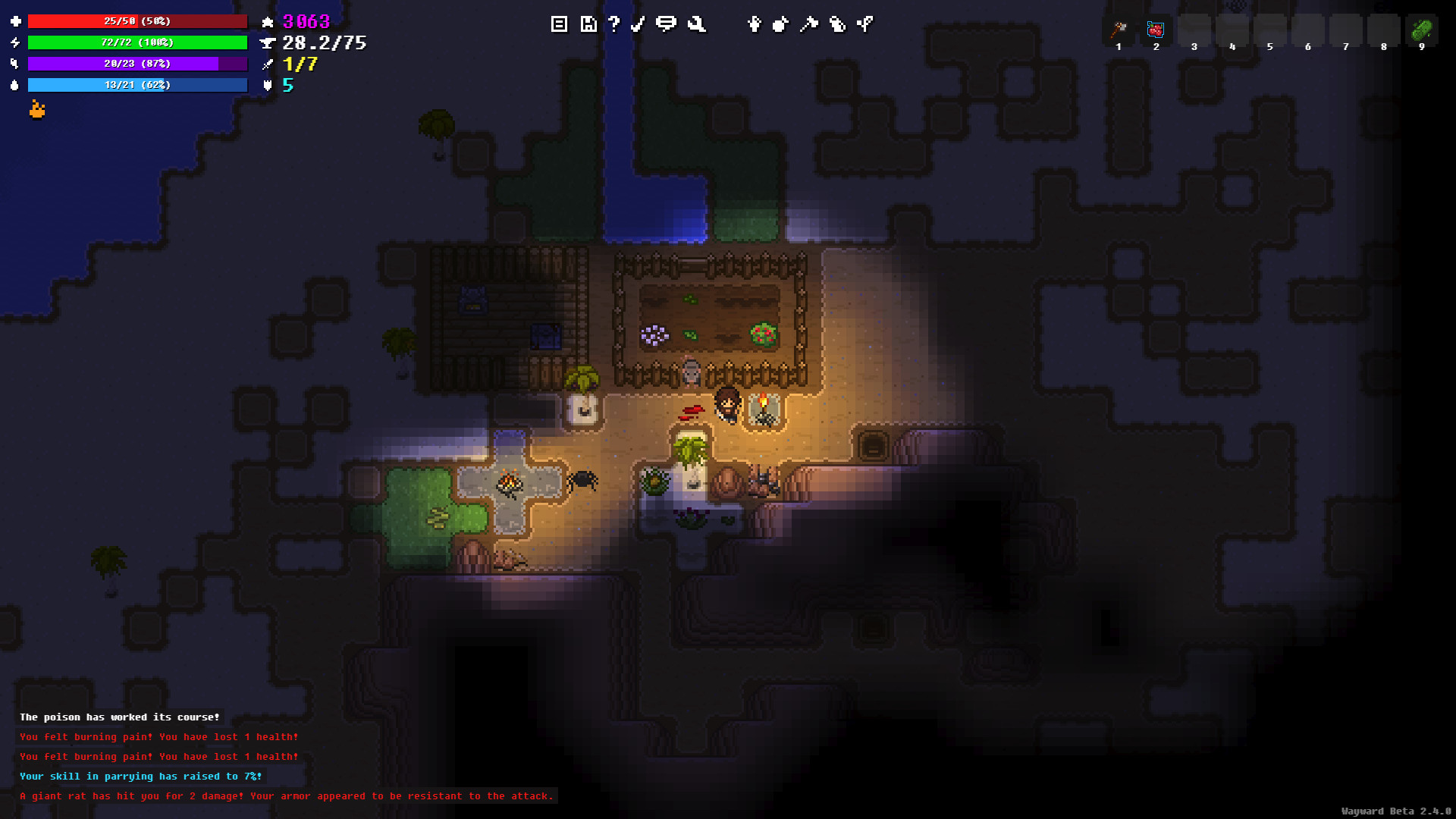 The opening few turns really push home how fragile you are in this hostile environment. A simple act like a mining blunder can result in all kinds of complications. Not equipping a basic wooden pole will result in punching rocky outcrops. This will lead to bleeding. If not treated with bandages, you will slowly lose health.

There’s an intrinsic logic to all gameplay systems. Harvest a plant or tree with your bare hands will result in injury. Harvested with say a hammer will work but won’t be as effective as a sharp stone blade. Not only will this result in damaged crops but also wear your precious stamina down. Once you understand this key fundamental, the game opens up its beautiful understated design. Logic, reasoning and awareness of your surroundings are key to your success and survival.

Another thing to consider is that every action you take on the island has a reaction. This is known as the reputation meter. Think of it as an earth Gaia system. Be eco-friendly and you will be rewarded with a much more benign environment, or go full consumer capitalist and rape resources and kill livestock. The game’s difficulty will be ramped up and nature will bare its teeth, with tougher monsters and night-time visits from all manner of wild beasties.

Subnautica (a previous early access game I have had the pleasure of previewing) employed a similar system. Wayward uses this dynamic, but a much more subtle and measured approach. 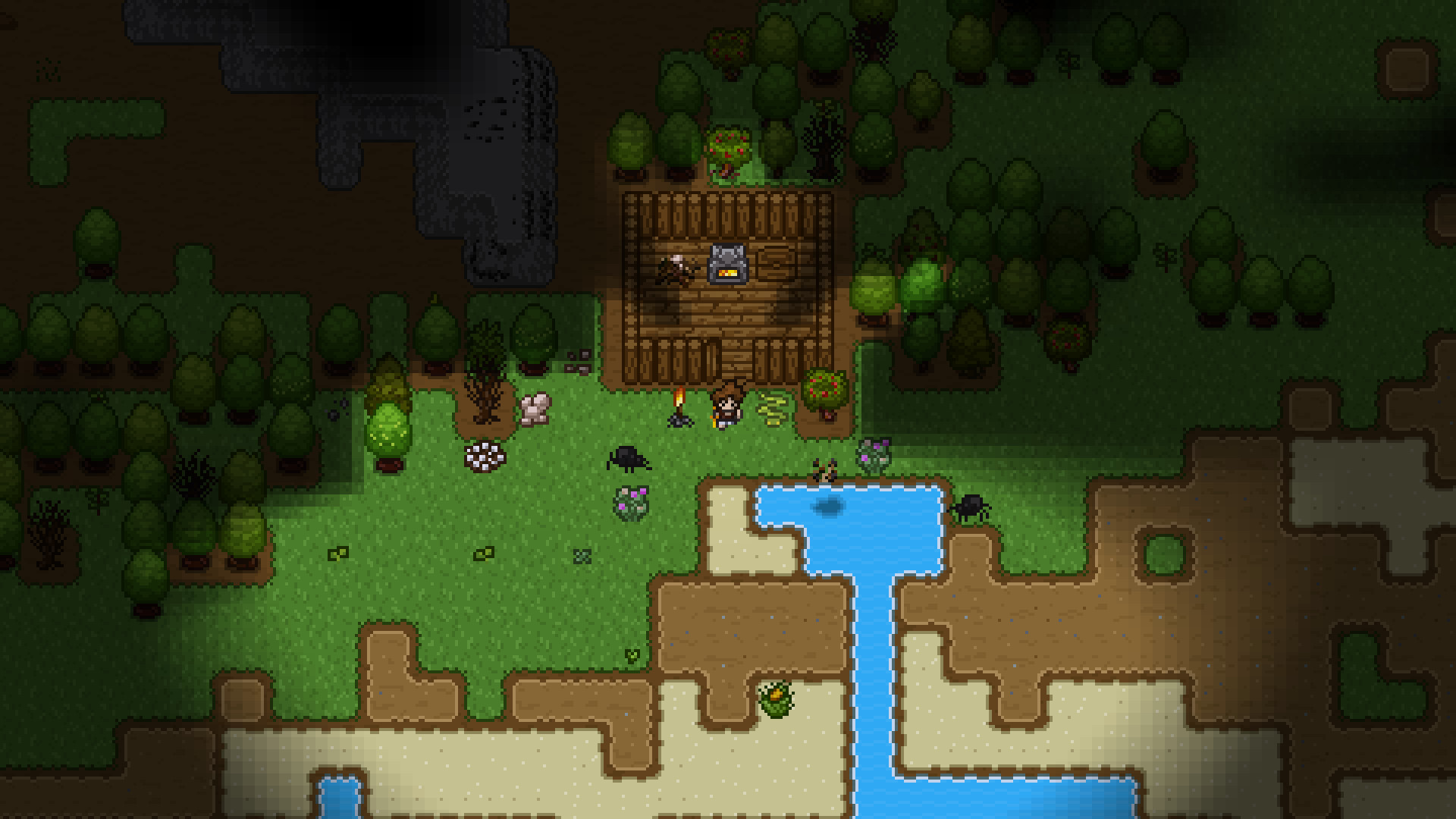 Now all this crafting and methodical gaming would be an arduous task on its own if you had to battle with an obtuse or broken UI. Luckily, you can immediately allay those fears with this game. The GUI is a pleasure to work with, obviously polished and perfected over numerous builds. Hot keys and quick slots abound. Default actions can be set, streamlining fundamental tasks. Every stat meter and item have a mouse roll over tool tip, imparting all the info you need to easily get you on your way. There’s also a built in tutorial mode which slowly takes you through the early stages of the game. Covering the essentials; gathering, fire starting and shelter building tasks.

On one of my early run-throughs, I encountered a spider. Ill equipped to fend off its attack, I got poisoned. After several turns, I managed to bludgeon the creature with my bare hands. Not knowing how the poison mechanic worked I panicked and noticed in my pack I had a glass jar of purified water. I’d also picked up a medical herb whilst gathering. I checked my crafting menu and found I could concoct a water-based cure for poison. I crafted said item and drank it. For some strange reason yet to be understood, the glass had now disappeared from my inventory, my only source of carrying any form of liquid. Slowly after wandering the island in search of animals to skin, in order to fashion a water pelt, I fell upon a stoney enclave. I wearily trudged into the gorge, slowly losing hydration all the time. Desperation led me to munch on maple seeds in order to keep my stamina up. Finally, I came upon an opening into a new biome with a much colder climate and snow on the ground. I ate the snow and my hydration level rocketed. Unfortunately, this also affected my core temp causing damage to my overall health. I stumbled on for some time until starvation finally took its toll and the icy dark fingers of death ripped me from this mortal coil. 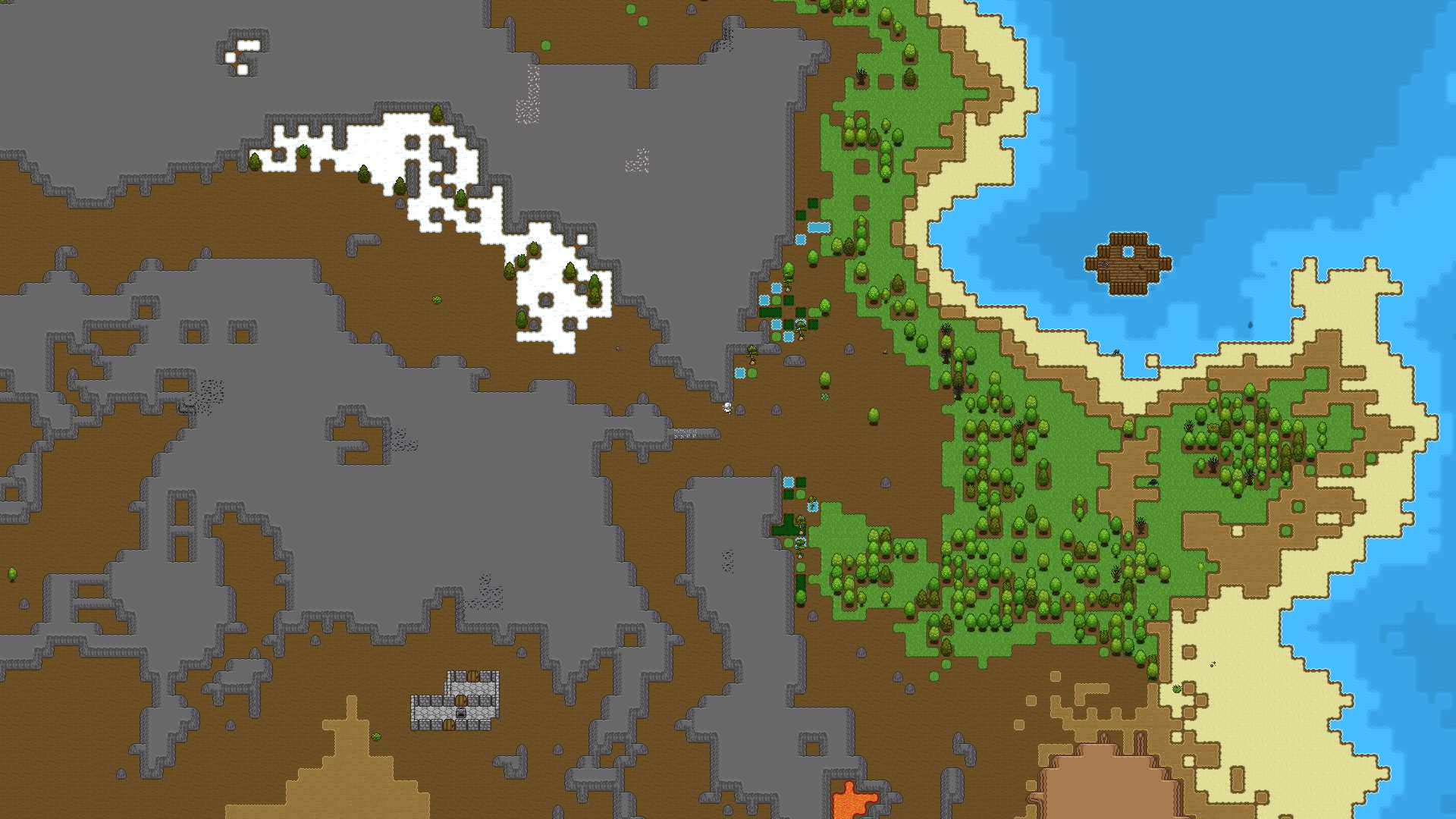 Wayward is a pure slow burn game that rewards repeated playthroughs. Given the rng for the initial inventory loadout and the procedural island creation, no two sessions will ever be the same. This is not a game for the faint of heart or for the easily frustrated. This game will test your metal. Skillful players with many hours into the game can suddenly find themselves up shit creek through no fault of their own. Circumstances can turn against you and unfortunate sequences can quickly snowball into a struggle for life in mere turns. 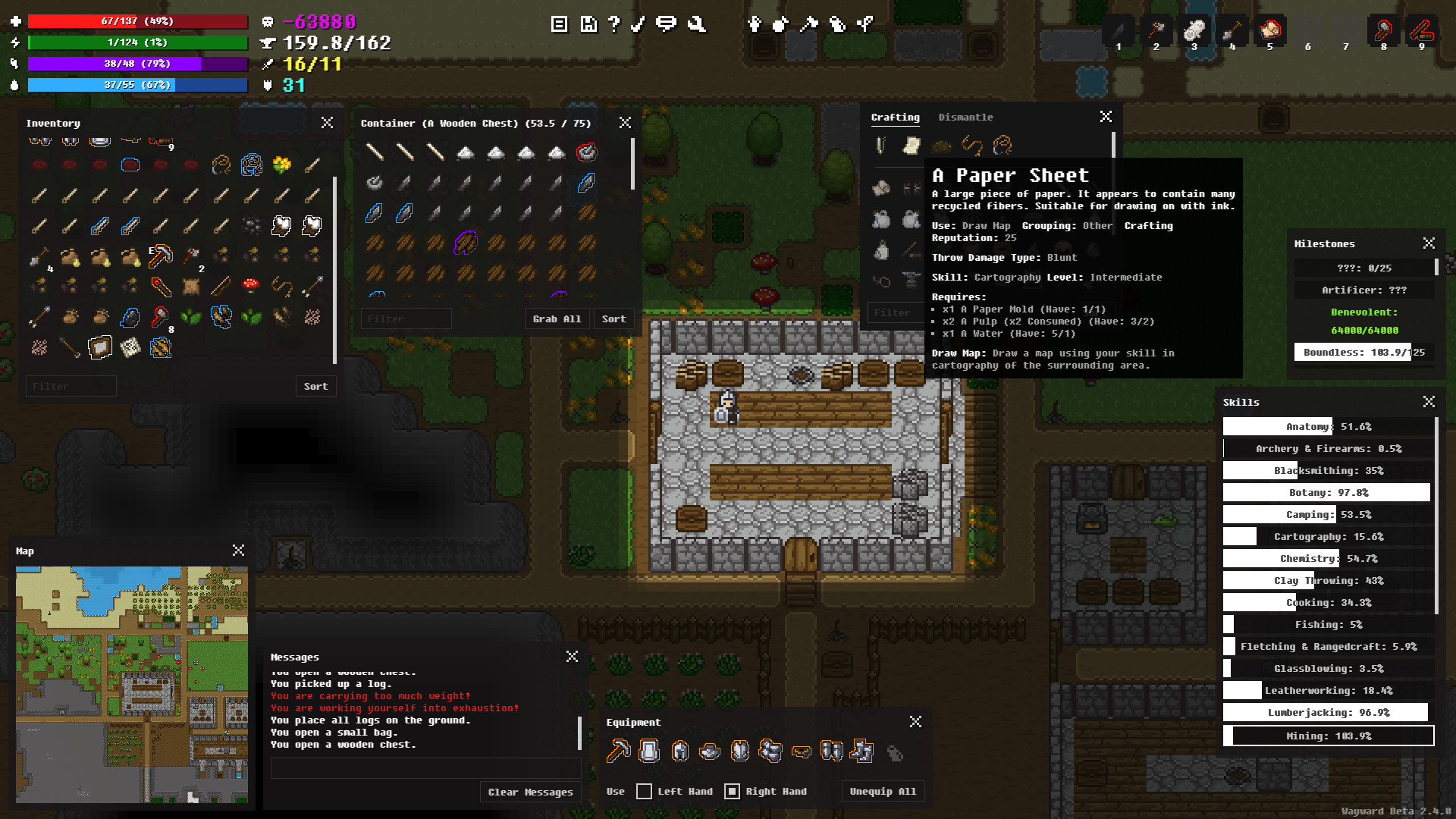 This is a marooned simulator. Every system from the real world has been transposed into a virtual pit of hell. This impresses on the player, that nature is a brutal and unforgiving beast. The real world luxuries we take for granted are hard fought victories out in the wild. Running water, shelter, food and health cures are vital if you want to survive for more than a day in this island paradise. Attaining them is a struggle, but the satisfaction once achieved is immense and hugely rewarding. There’s a whole lot of game to unwrap in this tightly bound package.

If you ever wanted a game to faithfully recreate a Robinson Crusoe or Tom Hanks Castaway experience minus “Wilson” then I would heartily recommend Wayward. It’s a superbly crafted gem set in a sea of azure deep blue gameplay.