The Escapists 2 is the sequel to the popular pixel-graphic prison-escape sandbox game. Read on to see how it measures up.

The Escapists 2 is the sequel to the hit pixel-graphic prison escape game released in 2015, by Mouldy Toof Studios and Team 17.

If you’ve played The Escapists then the setting and core gameplay of this sequel will be familiar to you already, and you can probably just skim over most of this review. For anyone else, The Escapists put you in charge of a prison inmate and gave you a series of ‘sandbox’ prisons to inhabit and from which you had to try to escape. The Escapists 2 retains the same basic idea.

Whereas The Escapists made use of reasonably well-made pixel graphics, this sequel improves upon them immensely; everything looks so much nicer in full-screen HD resolutions now! The characters appear much more cartoon-like, though, which may not appeal to fans of the blockier graphics from the first game.

Characters have a lot of personality. When you start a level you can customise (or randomise) the appearance of the cons and guards in the prison, and as you play you unlock further customisation options as well. These don’t make any difference to the gameplay, but they’re still a nice reward. Animations are good, too, though there isn’t a huge amount of variation in them. 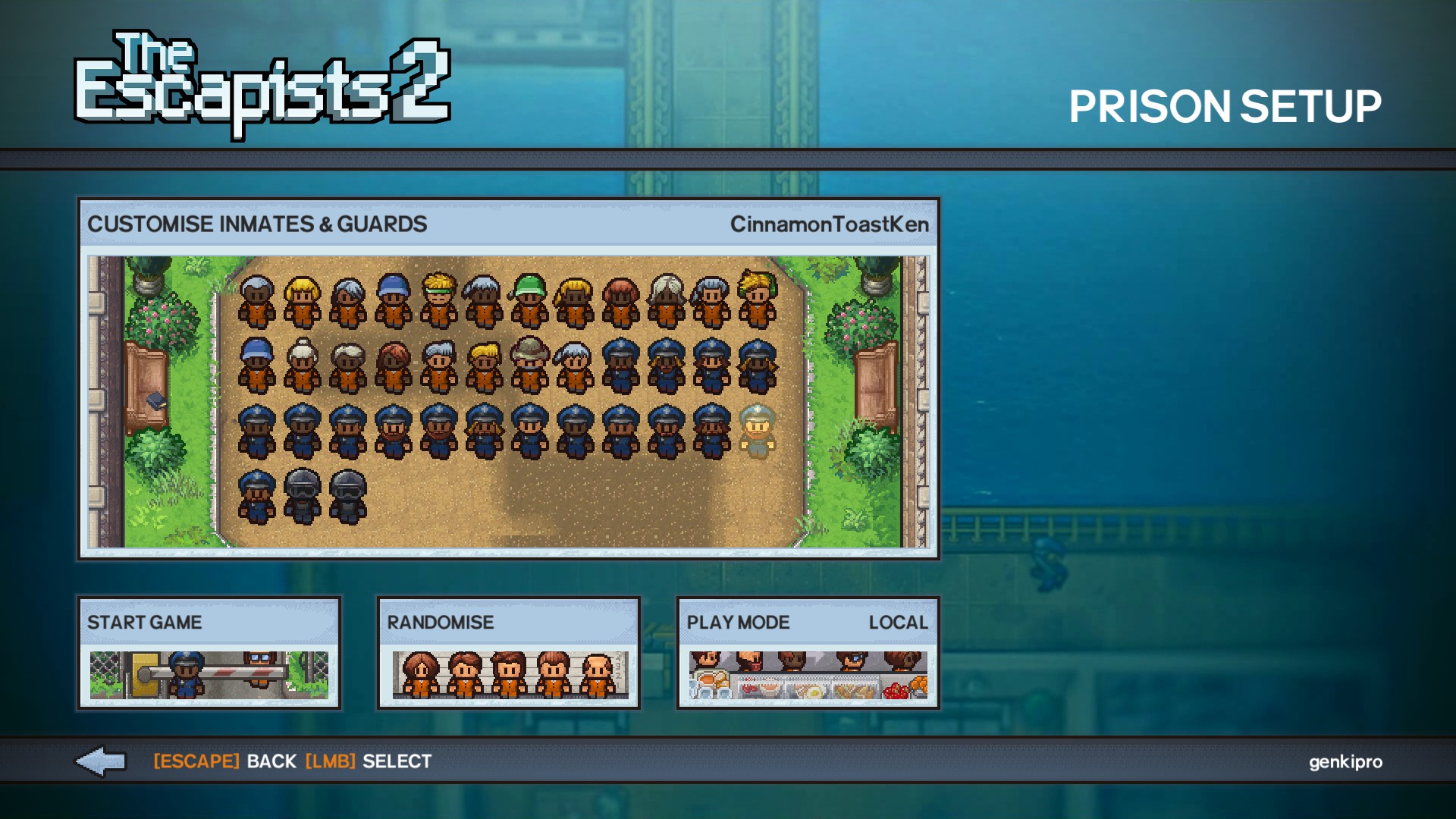 The core game includes 10 different prisons, which vary vastly in appearance as well as setting and escape methods. Most floors and walls are destructible, and there’s a huge array of crafting components, weapons, crafted objects, and other general scenery objects lying around, some of which are movable. The detail is good, given the graphical style.

Graphics options are limited to vsync, resolution, windowed / full screen, blur, and a detail level for shadows. I haven’t had any graphical glitches or performance issues.

The soundtrack to the game sounds to me like a 90s midi festival, with tracks in many different styles: the title music is a sort of sneaky heist number, while the credits are a western theme. In-game there are a few different background tracks that play depending on the situation. It’s not the sort of thing I’d choose to listen to normally, but it suits the game well and has a consistent overall sound.

Sound effects are appropriate to the action. They are volume-normalised properly and well produced. Nothing stands out as being exceptional here, but I also have no complaints about any of the sound. 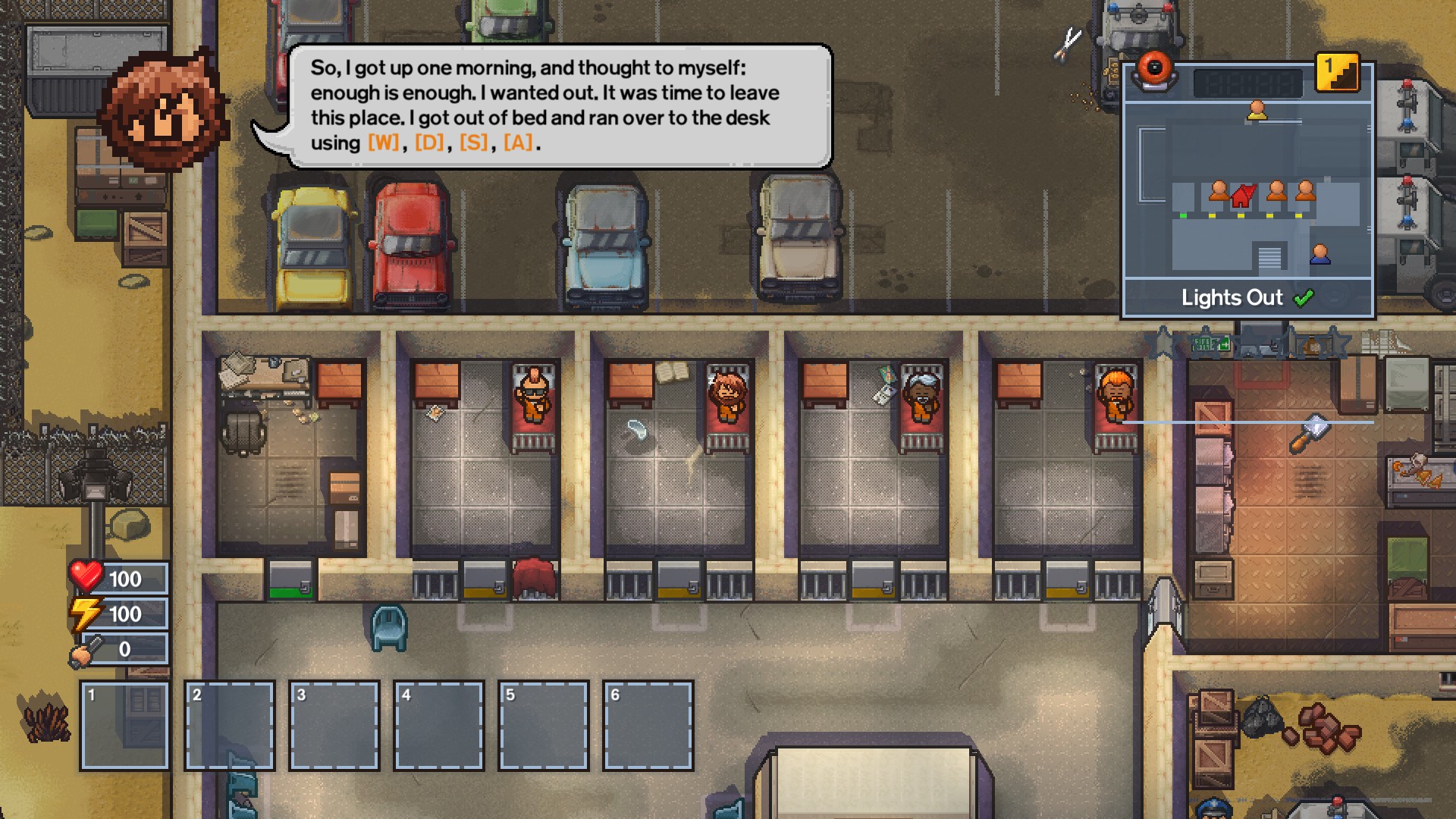 The basic gameplay is extremely similar to The Escapists, though it has been refined and expanded significantly. You’re dropped in a prison as a new inmate, told to stick to the rigid time-based schedule each day, and then left to your own devices, dreaming of escape. You can ignore the schedule entirely, but that’s a sure-fire way to getting caught and placed in solitary confinement. So you have to be clever, ensuring the guards see you at each location designated by the schedule, while you plot your escape, collect the items you need, and craft your jail-breaking tools! 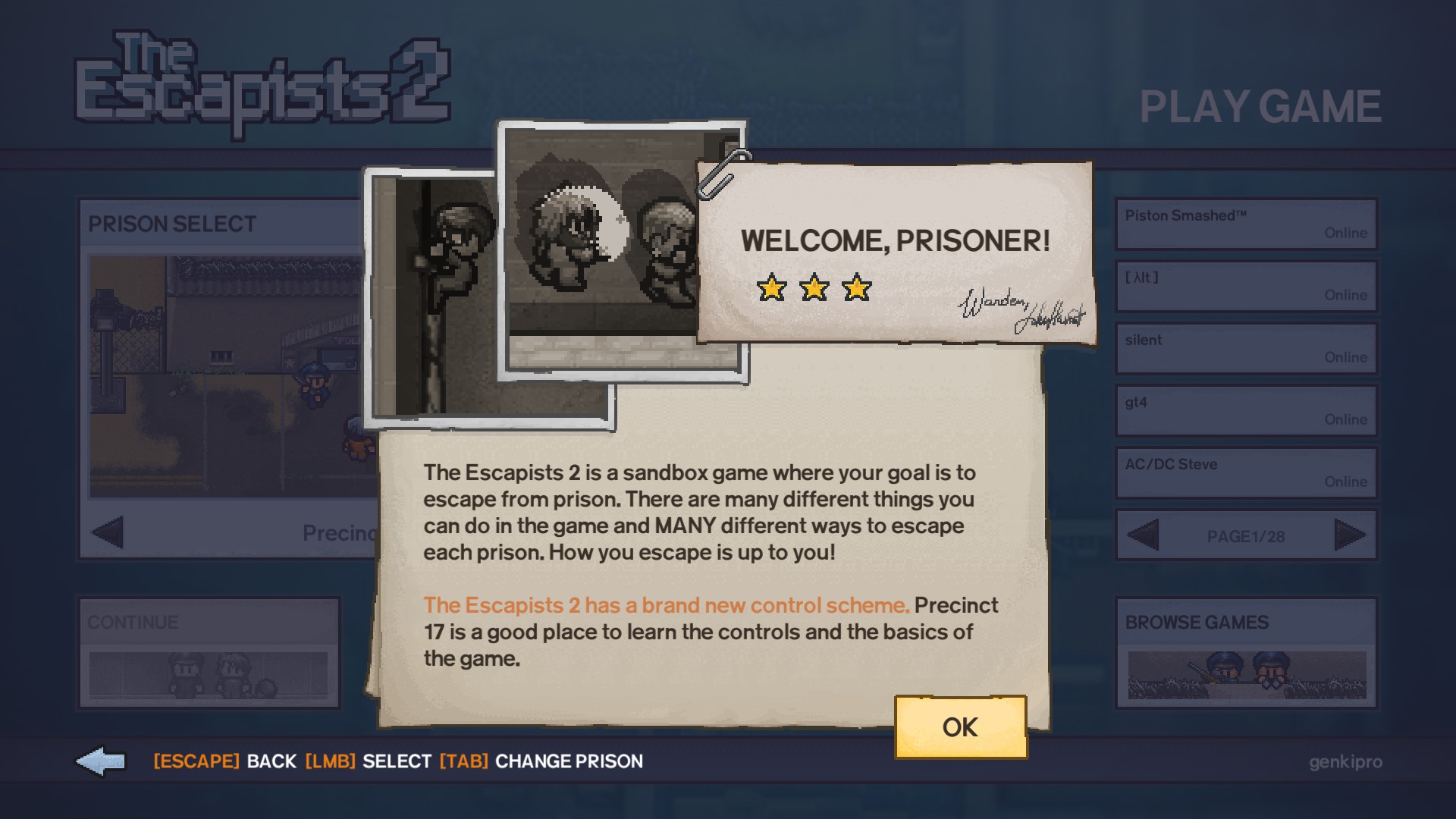 When I first loaded up the game I was impressed by the presentation and structure. Where The Escapists seemed like it had grown from a prototype that had never been abandoned for the real thing, The Escapists 2 oozes high production values everywhere: fancy intro, nice menu interface, well-implemented Steam integration, mostly excellent grammar, and an overall game structure that, while being somewhat traditional in its reward-based progression, is familiar and well thought out. This sense of refinement continues into the game itself.

There’s an in-game menu help section with screenshots and plenty of information, as well as a short tutorial level — Precinct 17 — set with a funny story told from the perspective of its protagonist, in order to introduce you to the game’s basics. And then each of the 10 included prisons provides you with a scripted camera pan across important points in the prison as the warden shows you around your new home. And oh, what a lovely minimap, expandable to full screen and scrollable. Hooray! 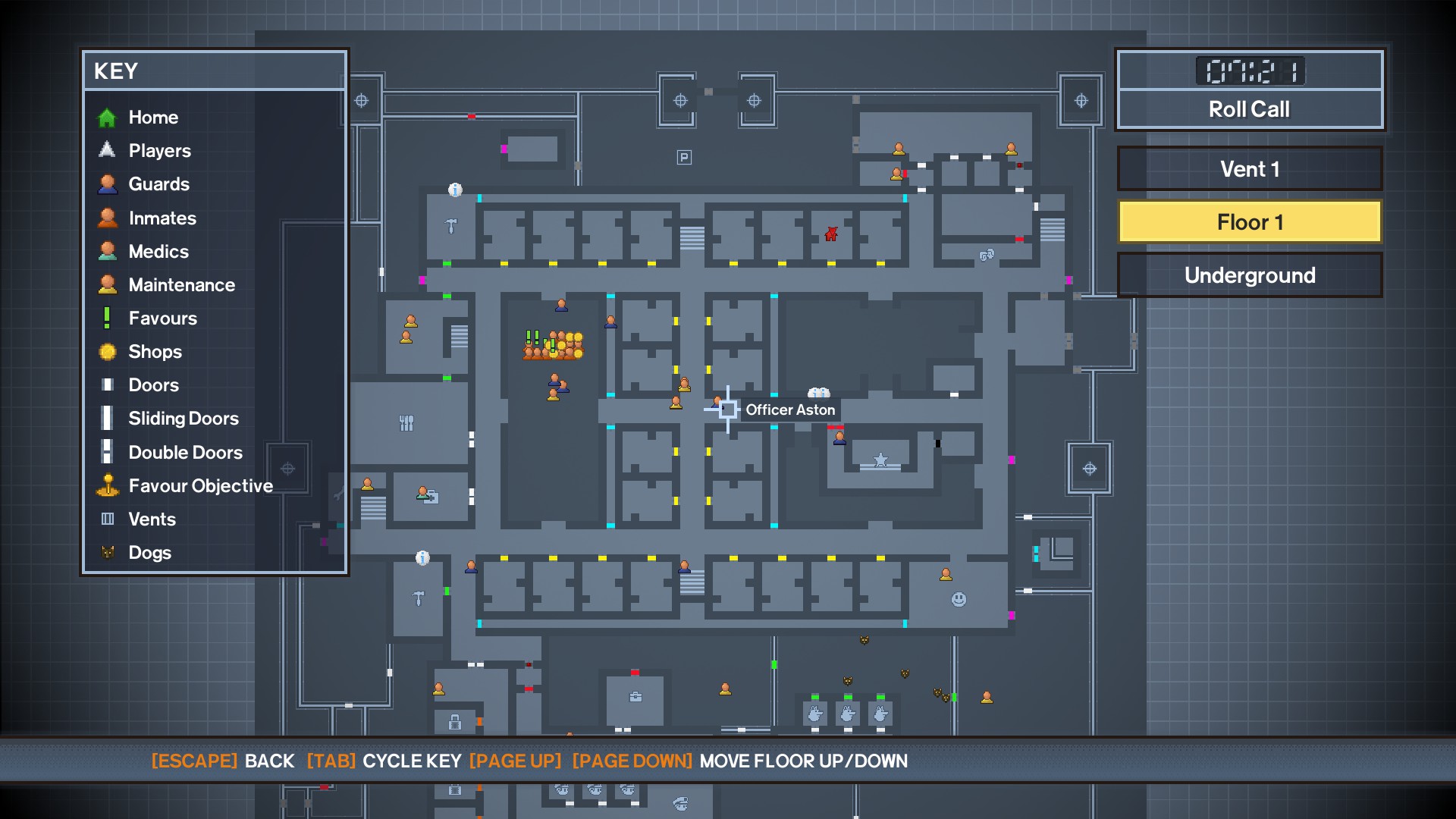 The interface is slightly more complicated than the first game, but also more user friendly. I got lost very easily in The Escapists and felt as though I didn’t really know what I was doing, often getting blasted by the guards when I didn’t even realise I was doing anything wrong. This game doesn’t give me that same feeling and, usually, if I get caught by the guards it’s because I did something stupid.

It feels more interactive than the first game, too, with plenty of items to find and craft, more quests to undertake for other inmates, and plenty of opportunity to get creative with your escape plans. You can move some objects around and hide contraband in a special section in your desk, away from guards’ prying eyes. Each prison does have two or three ‘unique escapes’ that reward you a key and an achievement for escaping the level in a certain way. Collect enough keys and you unlock the later, more difficult prisons. 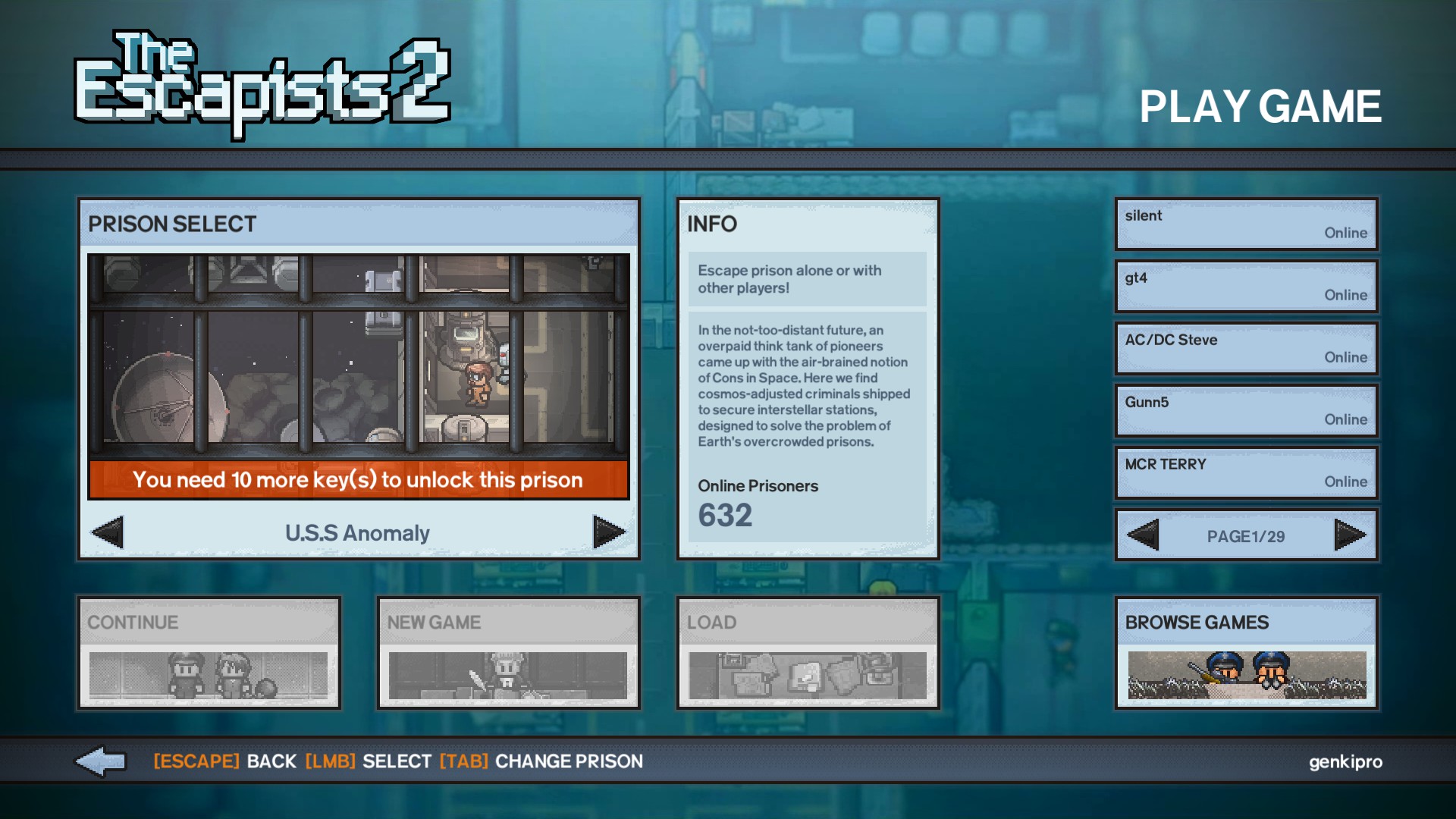 And finally, there’s up-to-four-player multiplayer, with some escape methods only available if you have friends to help you out. Though I’m generally not that keen on multiplayer games, the developers have done an excellent job of integrating it into the game style, though a planning interface would be great to enable some more-detailed escape plots to be organised in game. Just be aware that, as with basically any multiplayer game these days, there are griefers here, too.

Security levels and lockdowns seem to make more sense now, too, though I don’t understand why guards will sometimes intervene in an inmate brawl and sometimes just walk past, seemingly oblivious to what’s going on around them. The guard dogs are ridiculously good, too; they can sniff out a stolen key no matter where you hide it! 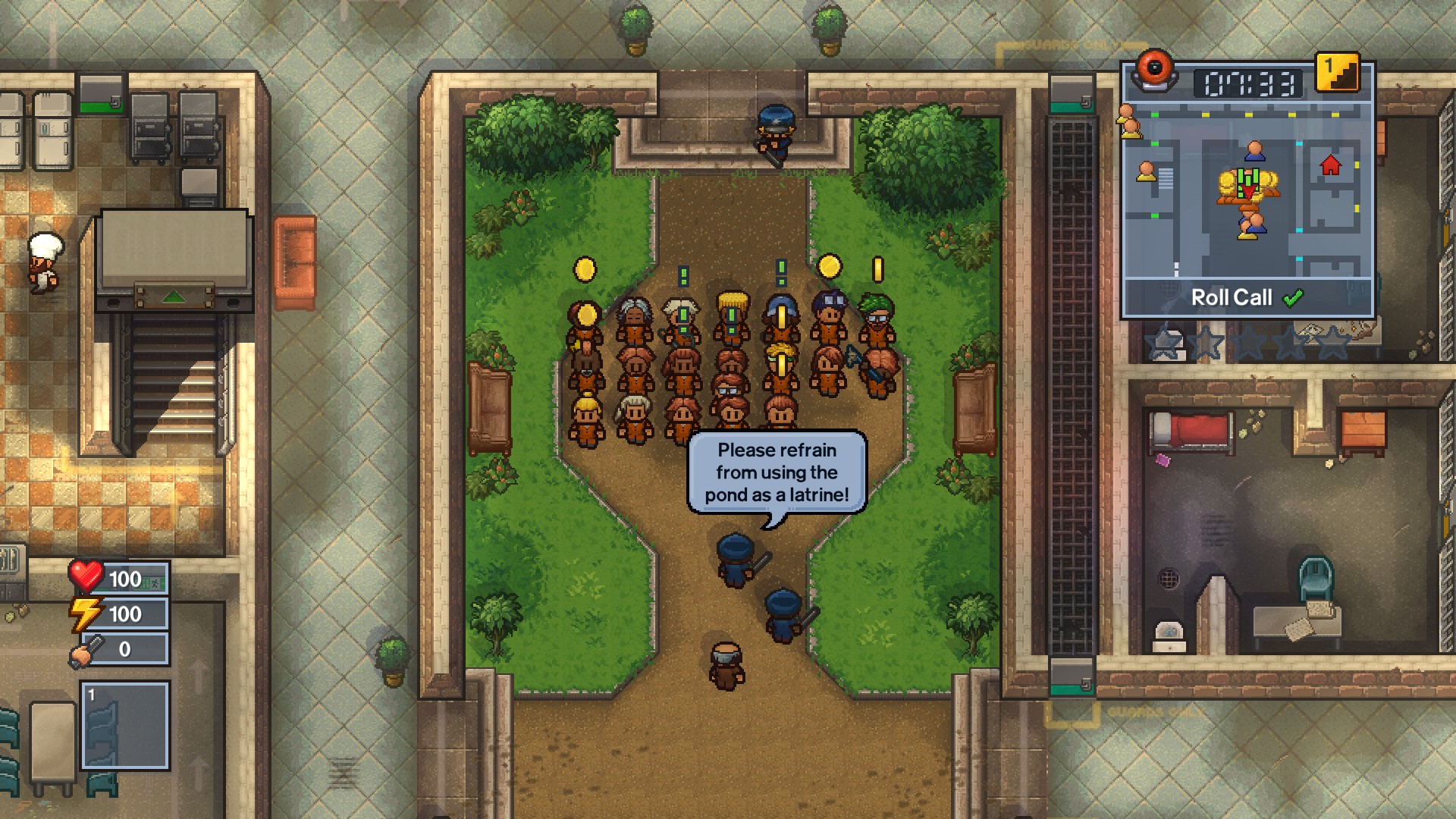 The game still involves a lot of grinding. In order to craft what you need to escape, you have to either find or buy various components. And that involves either money, from favours for other inmates or getting a job, or luck in finding what you need scattered around. Inmate desk contents seem to refresh randomly quite often, making this less frustrating than it could be, but I’ve wasted a fair bit of time just wandering around searching for that elusive toothpaste, duct tape, or file. Stamina is still a pain, too. It’s too easy to lose and too slow to gain, so you need to make sure you carry around stamina-recovering items if you plan on doing any hard work.

I’ve only encountered two obvious bugs, where some of my contraband items and equipment morphed into different items in my desk or when I was knocked out. I’m not sure why it happened and it was only temporary, but still weird. 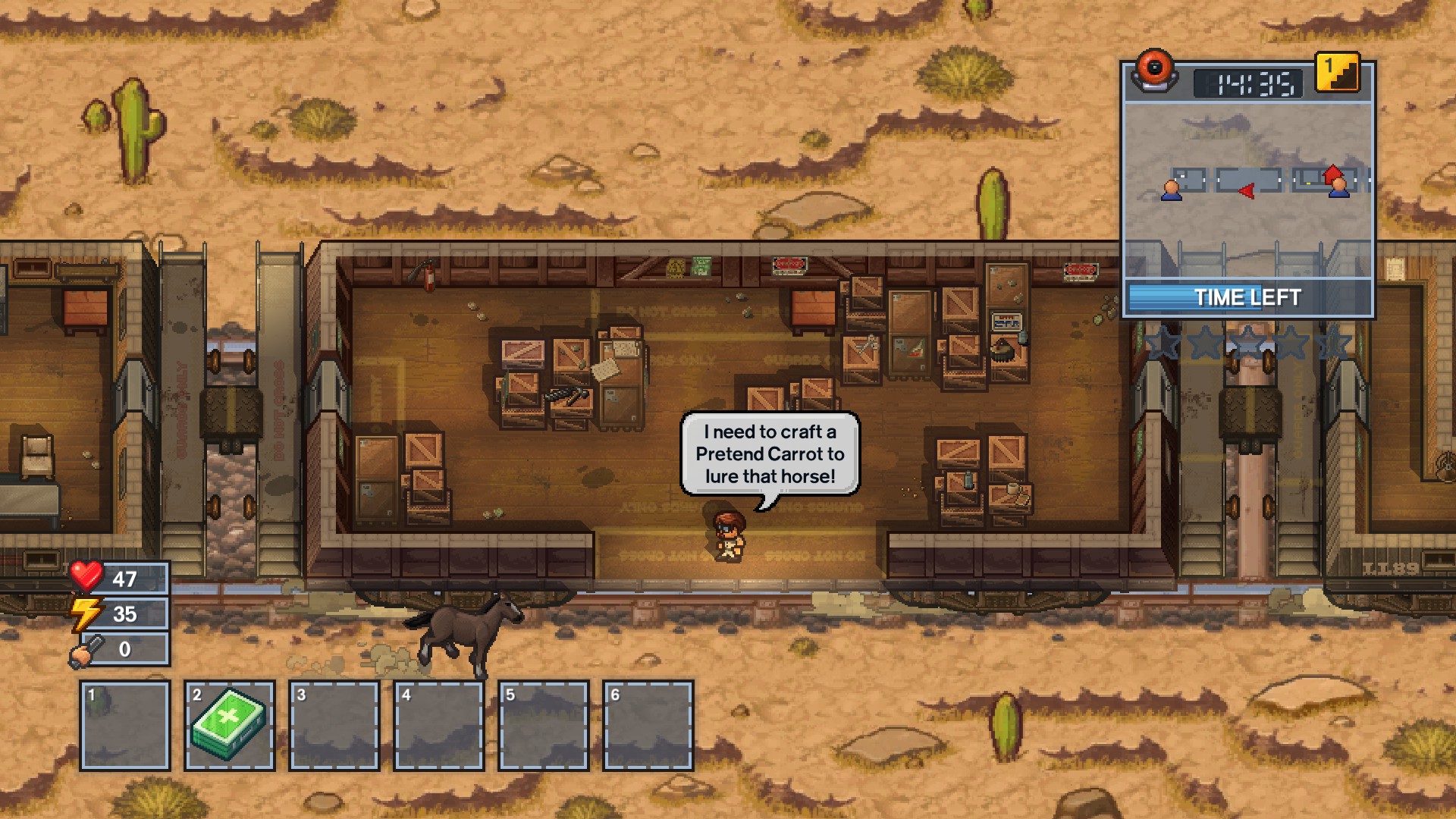 Pros:
+ Improves on the first game in basically every way
+ Great sense of humour
+ Much higher production values than the first game
+ Multiplayer that’s well thought out and integrated
+ Steam Achievements and Trading Cards 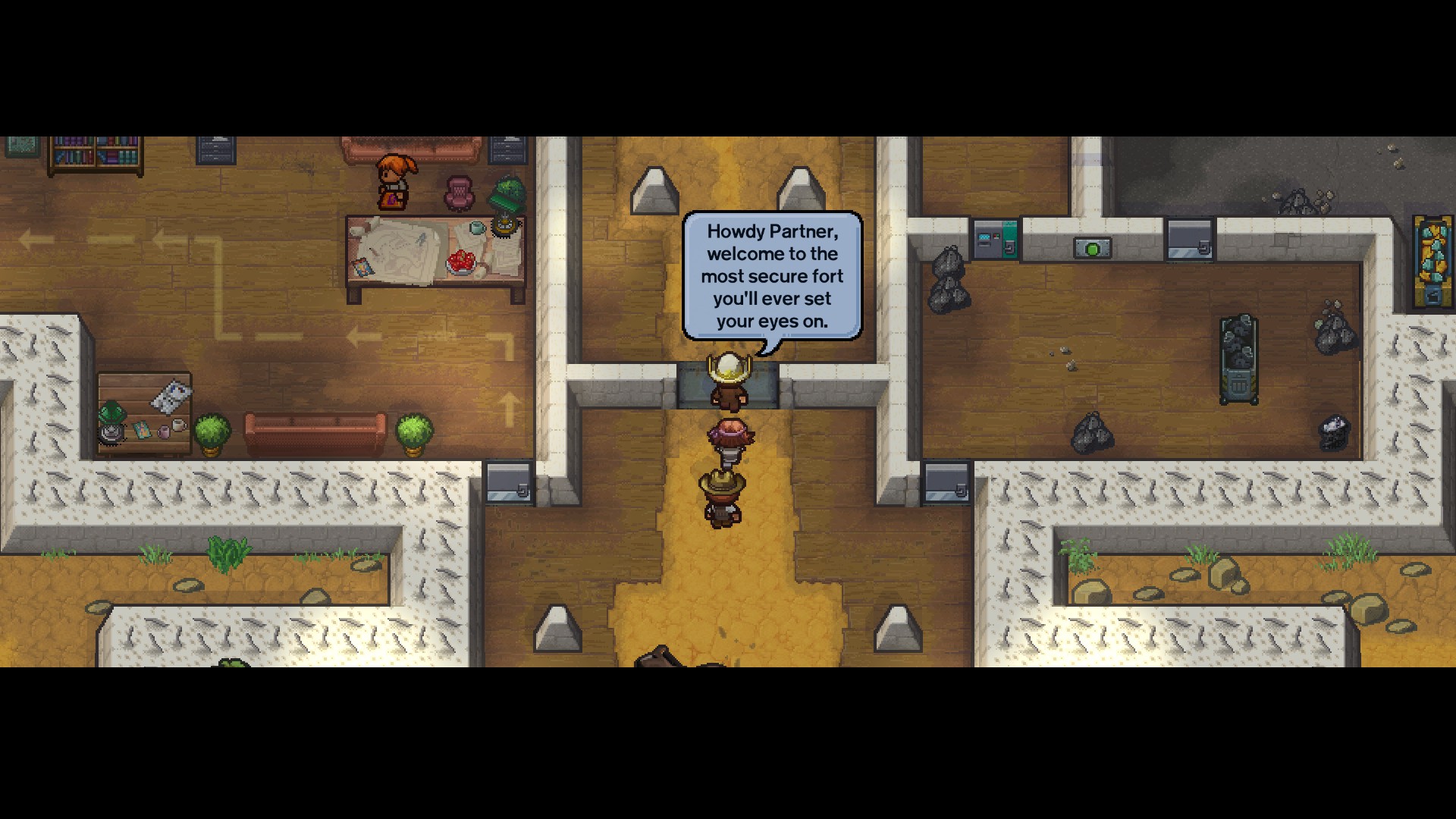 This comment might raise the ire of die-hard fans of the first game, but to me The Escapists 2 is what the original game should have been. The graphics are better, the controls are better, and the gameplay just seems to make so much more sense. And it has multiplayer to boot! While the first game was a very creative setting for a crafting-based sandbox game, The Escapists 2 is necessarily a bit old-hat in that regard, but it is a much better game. There are many hours of fun to be had here, though quite a lot of them will be rather grindy.