Cat Quest won’t revolutionise the ARPG genre, what it will do however is serve as an excellent introduction for people new to it and for parents who want to introduce children to the joys of gaming.

Prepare for cat puns, this game has every single one you could imagine, and a few more you may have missed. If you are not a fan of cats, run now. Otherwise, press on dear reader, for things are about to get a bit furry.

This is what I thought cat quest was… 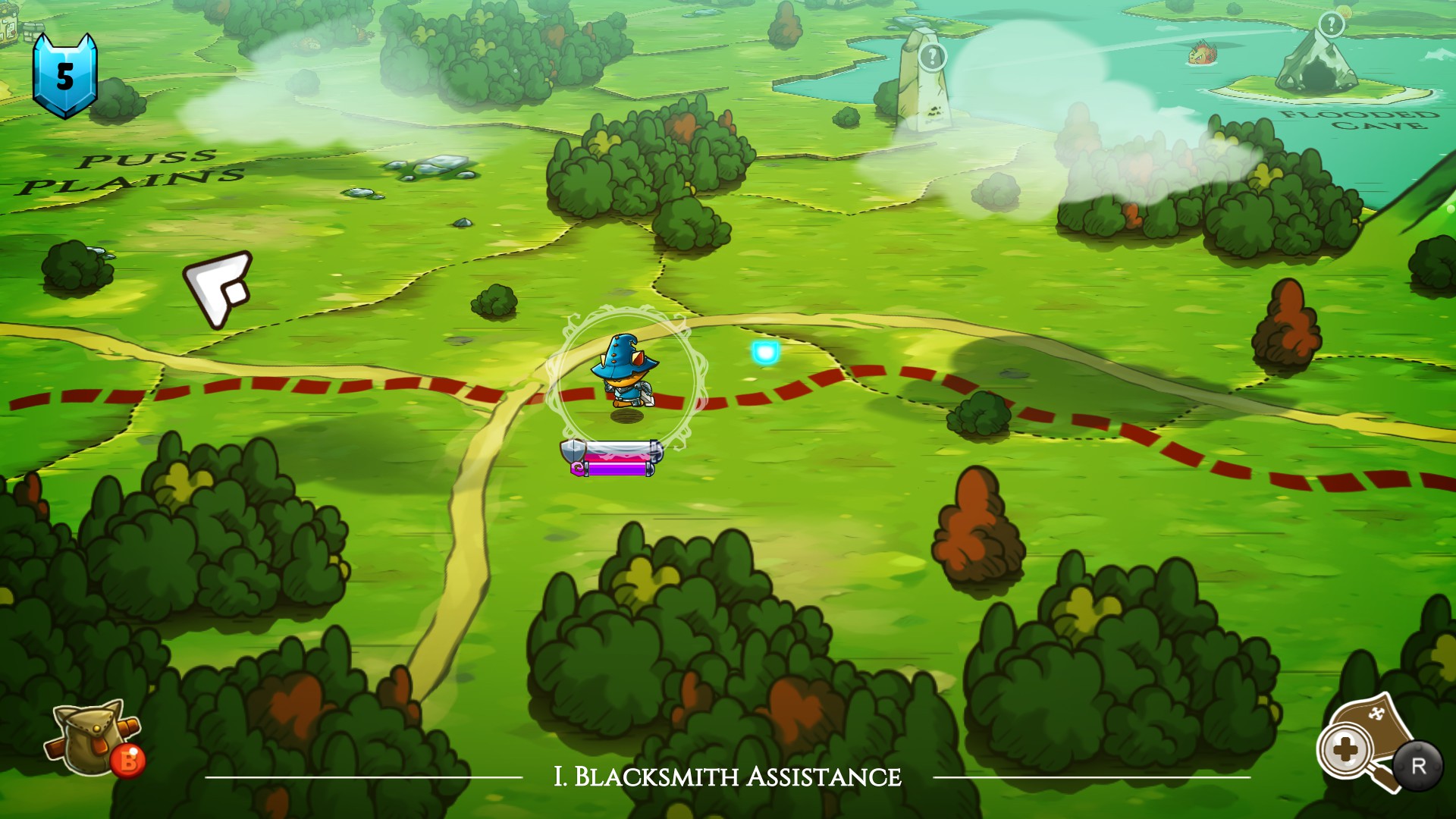 Note the family friendly scenery, the well done if somewhat chunky graphics, the fairly simple interface (there are some pretty straightforward stats powering the whole thing), the nice layout. I settled in for what I expected to be a couple of hours of fairly brain free smashing of enemies and to write up the game as a Save for Later with everything being pretty much rote by the numbers.

This is what Cat Quest actually is – 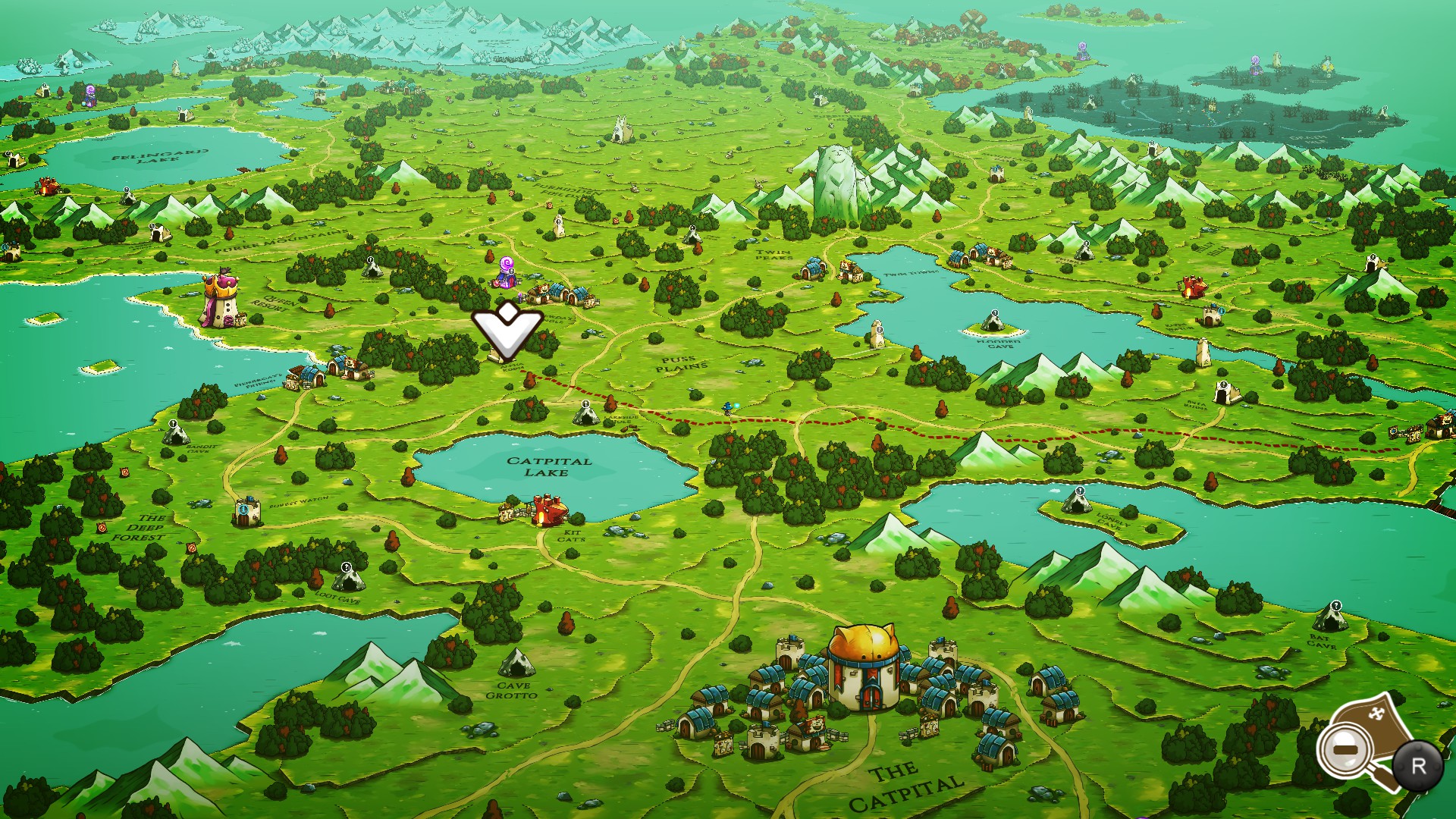 This isn’t even all the map, in fact, it’s barely 60% of the map, it goes some distance down, and to the left and right of what I’ve been able to capture, and there are some hidden areas which you won’t find just by looking at the main landmass itself. This place is bloody huge. There’s stuff in the game you won’t even get access to until you’ve finished the main storyline, to say that this game has plenty of stuff to do would be a little bit of an understatement, however, unlike a lot of the traditional Diablo type games, it’s all in the quests. Kill XP can get you levelled, but compared to questing, it’s nowhere near as efficient. A good example is this – nailing a dragon several levels above you might get you say 3,000 ish XP and some gold, but a similar quest may get you 10,000 XP, 500 gold, plus whatever you get for killing enemies on the way. This is a very questy Diablo, and that’s a good thing.

This game is really intended for entrants into ARPG’s, the storyline (which will take around 6 hours) is pleasant, very much designed to be family friendly, there are a few neat twists near the end which make you wonder who the real bad guy was, if there really was any kind of bad guy. That is something you’ll need to figure out once you get to the end of the story, there’s also a lot of other side quests ranging from the eerie to the outright funny. All of it is presented in a very clear, chunky and easy to read format that is very much “Kid safe” and as a result, any parent could feel entirely safe letting their child discover about the dangers of Tuna and Catnip (both dangerous substances in this world of the Feline). There’s no blood, with enemies dispersing in clouds of blue mist, and the entire game has that very cartoonish feel that almost certainly means it’ll get a PEGI-3 and in this instance, I think I can stand by it too. 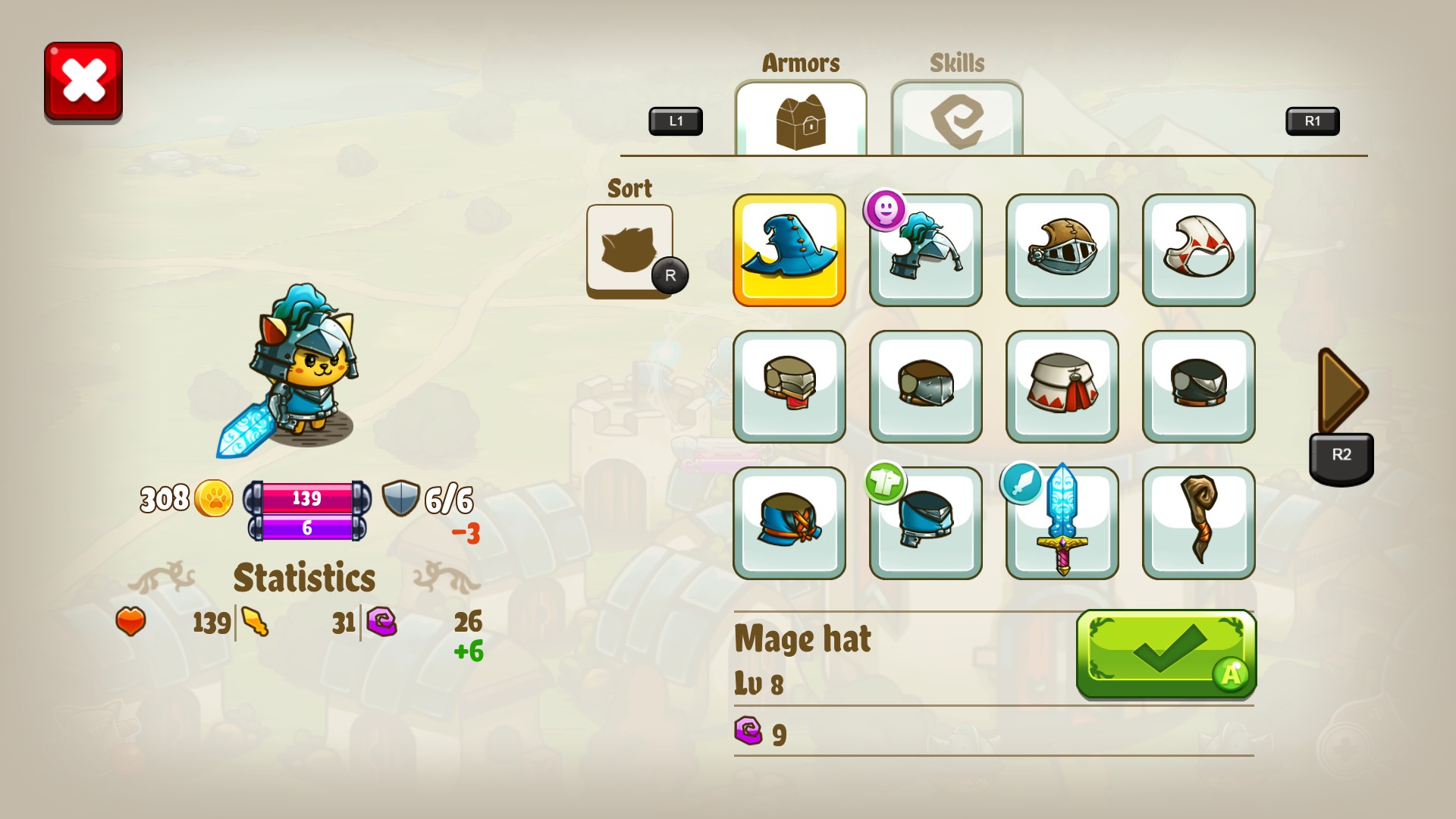 Fighting is very straightforward, with spells clearly telegraphed with big chunky red warning signs telling you where to expect them (and if you need more time to avoid the more difficult spells, the freeze spell which you can get fairly early on will give you plenty of leeway), and combat being very much an attack and dodge affair. There are no complicated stats here, just attack, armour, health and magic. Your equipment is drawn randomly from chests you will find across the world, and there’s a massive quantity of it, so much so that it’s nigh impossible to complete the whole lot before the end of the story, but never fear! For when the main story stops, there’s plenty to do afterwards, which new side quests taking you all the way up to level 99 (and one cave even listing itself as a level 200 requirement to go in, make sure you have good kit before entering).

The spell system for your own usage uses the exact same spells the enemies also have access to, which boils down to a bunch of offensive spells, a heal, and a buff, you can carry four at any given time out of your selection of eight, and they can be all levelled up with gold. It’s borderline required to have the healing spell somewhere because health does not regenerate (armour does, however) but other than that you’re not constrained on the other three slots, and can set up for personal preference. Mine was fire, ice and lightning because that played out well for keeping mobs in check.

You might notice that I’m finding it difficult to really go into depth about the game, that’s because, for all the charm and graphical cleanliness the game has, it’s not exactly a deep game, people used to Diablo style min-maxing will not get a great deal from this, nor will hardened Path of Exile / Grim Dawn players. This is not a game for them by any stretch of the imagination. However, if you’re new to ARPG’s and want a good way to get into the genre, or you’re a parent looking for a Birthday/Christmas present for a kid looking to get into gaming, this is an excellent place to start.

Verdict: It’s a genuinely good game, but by no means is it pushing any envelopes. It would even struggle to push a stamp. But what it does do is very polished, very playable, and very easy to get into, and for younger audiences, most definitely a great way to be introduced into video games. If this is the developers intent, then bravo, they’ve nailed it beautifully.